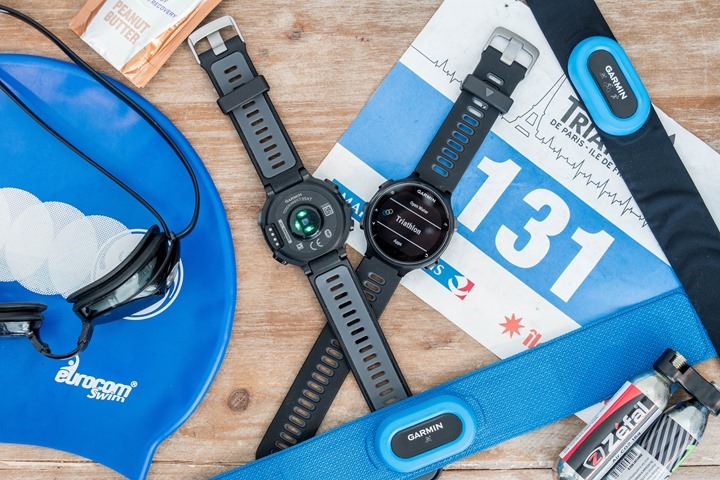 As a techie-geek I suppose there’s some expectation that I’ll be most impressed with the higher end gear. The stuff that has all the bells and whistles, and usually costs more.  But here’s the funny thing – out of the … Read More Here →

Hands-on: Garmin Edge 520 Plus with Mapping

Today’s multi-pronged release of cycling gear by Garmin is probably the company's most decisive yet at fending off competitors to its lucrative head unit business. And in some ways, they’re probably even undercutting their own high-end head units to stave … Read More Here →

Yes, it’s a bike radar. But no, it’s not the first bike radar Garmin has made. And yes, I can hear the comments about ‘why not buy a $15 mirror’ already being furiously typed into your keyboard. Except here’s the … Read More Here →

It’s been almost two months since Garmin announced the FR645 and FR645 Music (aka FR645M), its first wearable with music onboard.  Past Garmin watches could control music on your phone, but none could have music loaded on it and play … Read More Here →

(Update - March 5th, 2018 - My Full FR645 Music In-Depth Review is now available, head over to the link to check it all out!) Finally, Garmin now makes a wearable that plays music. In some ways, that’s sorta all … Read More Here →

Here's everything you ever wanted to know about Garmin Vector 3, from sizing and weight, to cornering capabilities, plus accuracy aspects and more! Read More Here →

Sometimes, I do sports that are actually not swim-bike-run.  Be it skiing, or…ok, I guess that’s it.  Actually, I scuba dive, which I suppose is still technically swimming.  Or swimming done rather poorly. So poorly that you’re never-endingly sinking to … Read More Here →

It’s been about 6 weeks since Garmin first announced the new Vivoactive 3 GPS watch.  This watch builds upon the Vivoactive HR by adding in more features including things like contactless payments with Garmin Pay, as well as structured workouts.  … Read More Here →

Garmin Vivofit Jr. 2: Everything you ever wanted to know

Today Garmin announced the Vivofit Jr. 2, which takes their surprisingly successful Vivofit Jr. kids-focused product line and adds in a few features. But most importantly it cements a Disney partnership for branded variants of the activity trackers covering Star … Read More Here →

Hold on, I know what you’re thinking: Didn’t the Forerunner 30 come out last year? Nope, that was the Forerunner 35. At which point you’re wondering how we’re going back in numbers – but that’s just how the cards fell … Read More Here →

A few weeks ago as part of Garmin’s trifecta announcement of new Vivo-labeled products, they announced the Vivosport (along with the Vivomove HR and Vivoactive 3).  In many ways the Vivosport got overlooked as it lacked the fashionista flashiness of … Read More Here →

Over the course of the summer we’ve seen both Garmin and Favero roll out new pedal power meters.  In Garmin’s case they’ve got their third generation Vector 3 pedals, while in Favero’s case they have their Assioma units, which are … Read More Here →

Garmin’s Vivomove HR: Everything you need to know

Sometimes, beauty is only skin deep. And unfortunately in the case of the Vivomove HR – that’s never been more true. But let’s not get too far ahead of ourselves.  The Vivomove HR is the second iteration of Garmin’s dabble … Read More Here →

After over three years, Garmin has updated its flagship GPS navigation computer with a new edition – the Edge 1030.  This new large-screen style unit features a longer battery life along with a new external battery pack option.  Not only … Read More Here →

Looking to find the best GPS bike computer? Time to dive into who does Strava best, which has best sensor support, and of course navigation! Read More Here →

Today Garmin jumped into the 360° fray by introducing their own 360° action camera – the VIRB 360.  This camera one-ups everyone in the specs department by mic-dropping 5.7K resolution alongside being completely waterproofed with GPS built-in.  Not to mention … Read More Here →

Today, Garmin introduced their latest generation front bike light – the UT800.  This light builds upon the connected concepts from their first generation lights, such as integration with their head units.  With the UT800 though, the company has shifted the … Read More Here →

Today Garmin introduced an updated version of its Vivosmart lineup, the Vivosmart 3.  This essentially takes the Vivosmart HR that we saw last year (aka Vivosmart Gen2) and shrinks it down.  Then they layered in a bunch of new heart … Read More Here →

Today Garmin announced their latest triathlon/multisport…and running-specific focused watch, the Forerunner 935.  This watch follows almost a year after the FR735XT was announced last spring, and only 3 months after the Fenix 5 series was announced in January (which just … Read More Here →

It’s been nearly three months since Garmin first announced the Fenix 5 series, a lineup of three core watch sizes/models (5/5S/5X), that spans 14 variants in total.  And that’s before we even talk straps.  This line builds upon the Fenix … Read More Here →

In virtually every post or video I make where I use an action cam, I’m asked which camera I’m using and why.  And even more commonly since this past fall I’m asked whether to go with the GoPro Hero5 Black … Read More Here →

A day or 13 ago, Garmin announced their new Forerunner 35 (FR35) GPS.  But with Eurobike in full swing, I put it on the back burner a bit until the dust settled.  Now that things have cleared out a bit, … Read More Here →

Last week, Garmin announced and released their newest action cam – the VIRB Ultra 30.  To summarize this 50-million word in-depth review in the most succinct manner possible: Someone at Garmin finally got it.  They created what might possibly best … Read More Here →

Everything you ever wanted to know: Garmin’s new $1,500 Fenix Chronos Watch Series

Well then, someone in Kansas is feeling ballsy today.  Garmin has just announced three new Fenix units, starting from $900 and topping out at $1,500USD.  Or, if you’re so fortunate to be living in the land of maple syrup, it’ll … Read More Here →