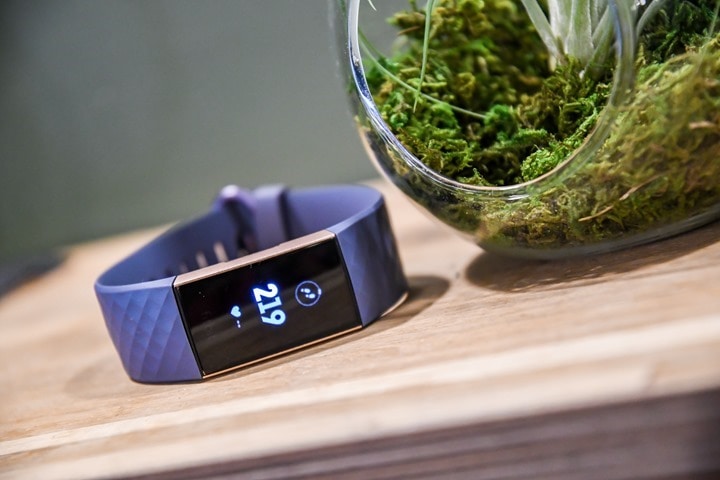 A Quick Look at the Withings Go Activity Tracker

As expected the early part of CES week saw a lot of new product announcements. There are lots of new players on the field with some innovative new products (and some obvious knock-offs and re-makes of existing technologies); but also … Read More Here →

Today Under Armour has announced a flotilla of fitness products, likely to take the cake for the most unique fitness products announced by one company at the show this week. They’ve done so by partnering with HTC and delivering a … Read More Here →

Update - March 2016! I've published my full Fitbit Blaze In-Depth Review here! Swing on over for all the details after extensive use! Today at CES Fitbit announced their latest wearable, the Fitbit Blaze.  This new unit is effectively a … Read More Here →

It’s been about a month since Polar announced their latest wearable – the A360.  This would be their first entrant into the optical HR sensor world, a key milestone for a company that’s effectively built its entire reputation and company … Read More Here →

It’s been well over a year since Withings released their initial Activité smart watch, which they then followed up last winter with the cheaper Activité Pop version.  Of course – looking at both watches at a glance you wouldn’t realize … Read More Here →

I just wanted to very briefly cover two new products that have been announced in the last 24 hours.  Neither one really warrants a standalone post – especially since neither company has samples available on-hand (or rather, in my hands).  … Read More Here →

Earlier this year at the Consumer Electronics Show (CES) in Las Vegas, Garmin announced a slew of wearable devices including the new Vivoactive.  The Vivoactive was designed as a merger between Garmin’s mid-range fitness watches (i.e. the FR220) and the … Read More Here →

It’s been a few months now since Fitbit announced and then subsequently released their Fitbit Charge and Charge HR units.  At the same time, they announced the Fitbit Surge GPS (which I’ve already reviewed here).  For this post though, we’ll … Read More Here →

It’s been a few months since Fitbit announced a trio of products, including their first GPS watch – the Fitbit Surge.  This joined two other activity trackers, the Fitbit Charge and Charge HR within the announcement (my review of the … Read More Here →

This past summer Mio announced two new products to their lineup – the Mio Fuse and the Mio Velo.  These products just recently started shipping in the past few weeks, giving me an opportunity to use the final hardware and … Read More Here →

When the Basis Peak was announced earlier this fall it was designed to fill in the gaps as well as build upon their previous product, the Basis B1, that was released about 2 years ago.  The Basis watch has always … Read More Here →

Today at IFA, the giant consumer-electronics focused show in Berlin, Garmin announced their latest activity monitor, the Vivosmart.  This unit builds upon the Vivofit that was released earlier this year with additional features and tighter smartphone integration. I had a … Read More Here →

In keeping with the popular trend of adding activity monitoring to devices, back in April Garmin announced their latest running watch – the Forerunner 15 (FR15).  This would take their popular FR10 budget-focused GPS running watch and then combine it … Read More Here →

Back in January Garmin decided to join the activity tracker fray and announced two related products: Vivofit and Vivoki.  Vivofit would be the standard consumer-focused 24x7 activity tracker, while Vivoki would be focused on corporate wellness and primarily targeted at … Read More Here →

The Polar Loop is the very first daily activity tracker on the market that not only counts steps, but also connects to a separate heart rate strap – providing you with heart-rate based calorie information for activities.  This changes the … Read More Here →

Almost a year ago Withings announced the Withings Pulse activity tracker at CES 2013.  However, it wasn’t made available until this past summer, when I started testing it.  Like most activity trackers it did all the usual items – steps, … Read More Here →

Here’s a fun fact to start out with: The FitBit Zip is actually probably the only product where I’ve written the review after over a year of use with the device.  Well, two devices actually.  But, more on what happened … Read More Here →

The Basis B1 watch represents the first fitness tracker on the market to do 24x7 continuous heart rate monitoring (all without a heart rate strap), in addition to all of the usual metrics like a step-counter and sleep.  Adding to … Read More Here →

The Nike+ Fuelband is one of many activity monitors on the market today. Up against the likes of FitBit, Jawbone UP, and others - how does it stack up? Read More Here →