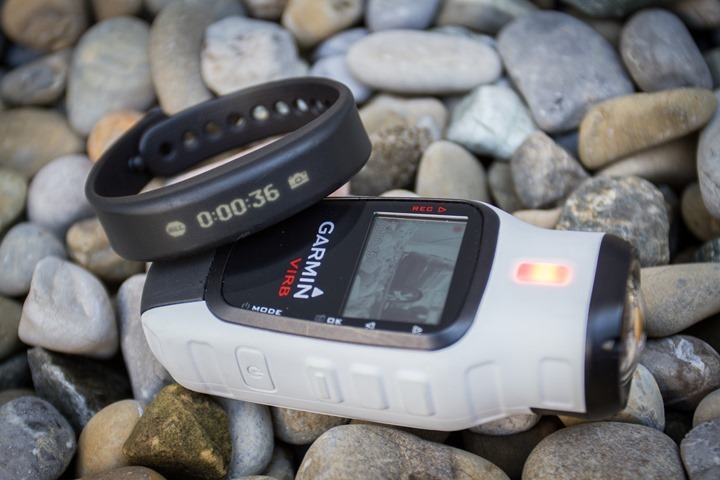 Today at IFA, the giant consumer-electronics focused show in Berlin, Garmin announced their latest activity monitor, the Vivosmart.  This unit builds upon the Vivofit that was released earlier this year with additional features and tighter smartphone integration.

I had a chance recently to play with the unit for a short bit of time, so I can offer some initial first thoughts.  Over the course of the fall I’ll pickup a unit and give it a more detailed review as usual.

For those in a bit of a hurry, here’s the core run down of the new things added above and beyond the existing Vivofit:

Now, all this functionality does come at a price – specifically, battery.  The unit gets reduced from a year’s worth of battery to about a week’s worth.  Which is pretty consistent with other bands in the industry that have similar displays and functionality.

With that brief introduction over, let’s dive into all the major new features.

The most noticeable change from the existing Vivofit is the display.  The Vivosmart uses an OLED display that can be used to display just about anything textual or stick-man graphics that you can think of. 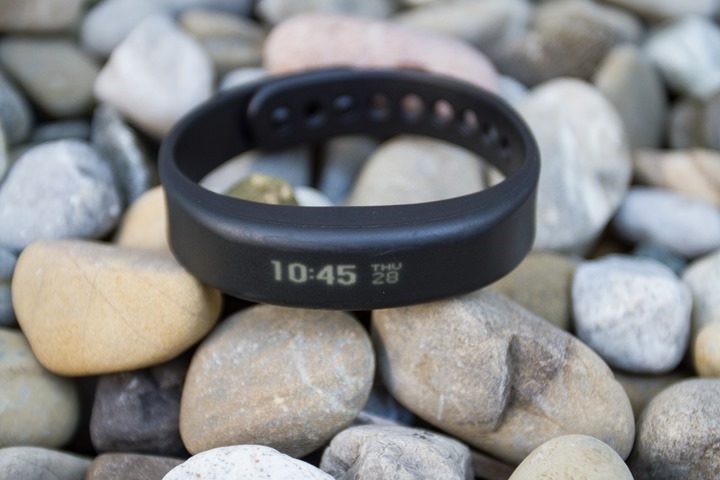 At the same time, said display is also a touch screen.  You’ll swipe left and right to change the display, and then can tap on a given icon on the display to select a given function. 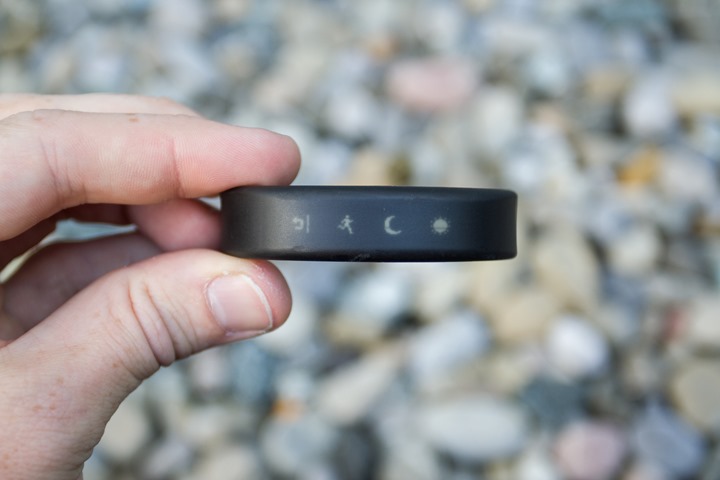 The display is off, unless touched.  Additionally, if your raise your hand up as if you were going to look at the unit (like a watch), it’ll automatically turn on.

In addition to the display, the unit now contains the ability to generate vibration alerts.  These can be used for notifications, as well as configuring a sleep alarm.  This means you can now use the unit to be woken up from, without disturbing someone else.

Despite the OLED display, the unit is still waterproofed to 50 meters, so you don’t have to worry about killing it in the shower or the swimming pool.

Of course, such a screen isn’t without its downsides, most notably – battery.  As mentioned earlier, this drops the battery life of the unit from what was about 1-year on the Vivofit, down to about 7 days on the Vivosmart.  This puts it in the same ballpark as some of the other units in this class like the Fuelband and Polar Loop. 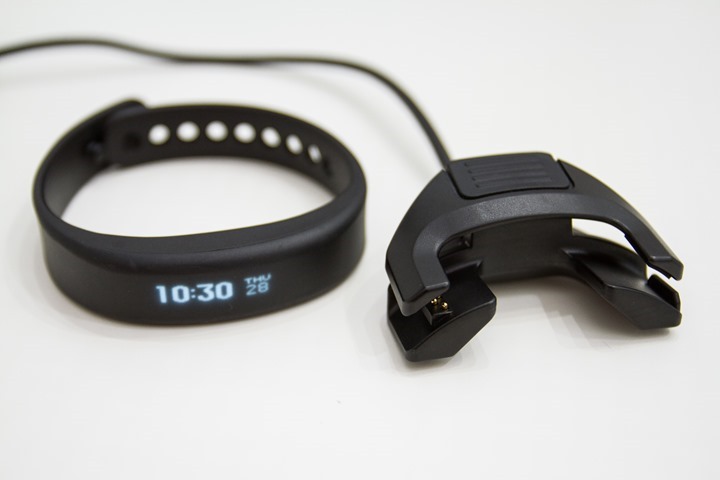 To charge it, you’ll use this included clamp charge that gives the Vivosmart a bit of a bear hug. 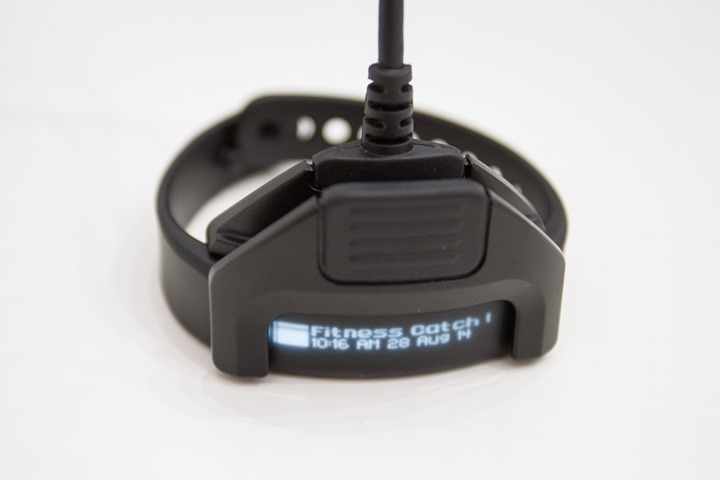 Next, the Vivosmart, as the name implies, includes smartphone integration.  Previously, with Vivofit that was basically just limited to synchronizing your daily steps and other activities via Bluetooth Smart to your iOS or Android phone.

Now, that functionality on Vivosmart has been expanded significantly to act much like a smart watch.  To start, you can configure notifications from either iOS or Android.  The most common types of notifications would be that of text/e-mail messages, calls and calendar reminders. 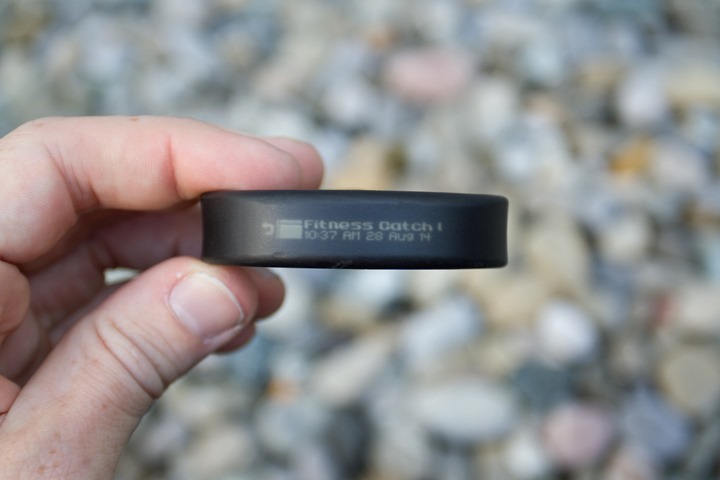 You can scroll through these messages – even the contents of them – by swiping and tapping the display. 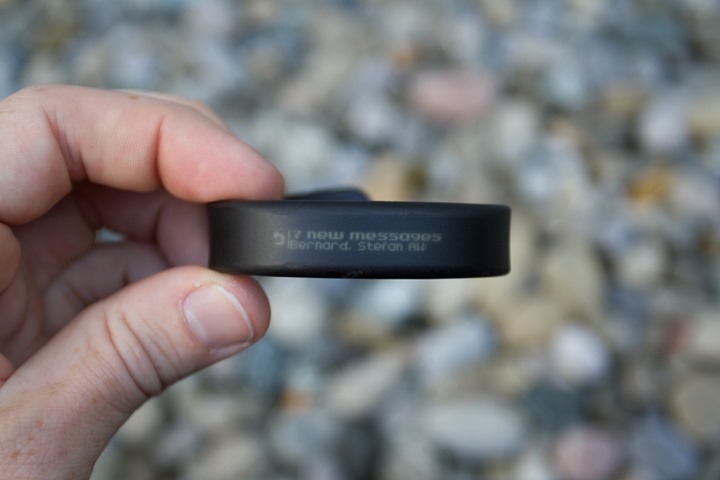 These notifications utilize the standard mechanisms on each platform, so they can be generated from anything from ‘standard’ stuff like missed calls and text messages, to more pressing issues like Angry Birds notifications. 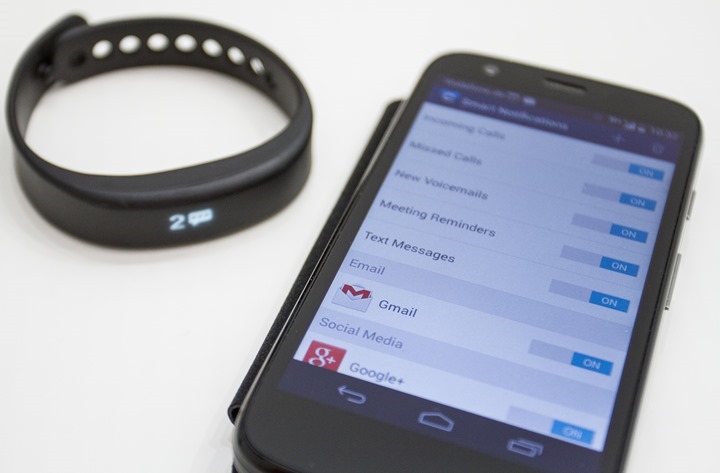 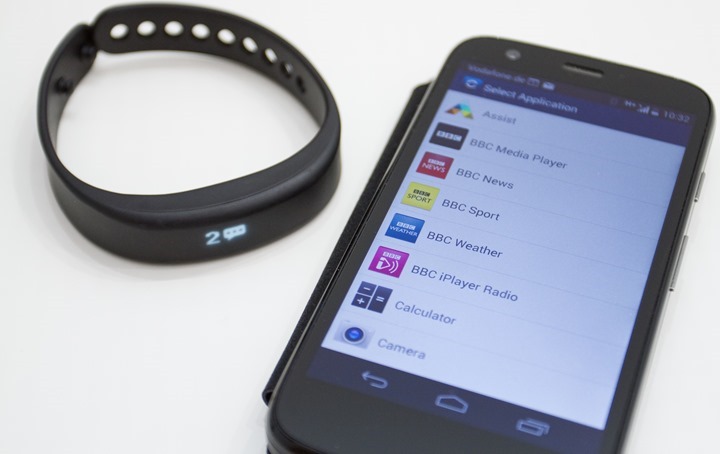 And, unlike in the past, this functionality will be available from launch on both Android and iOS (previously Android lagged a bit).

Next, you’ve got the ability to find your phone.  You can tap a button on the unit, which will trigger the phone to ring.  At the same time, the band will show a little proximity bar graph of sorts, that shows you how far you are from the phone. 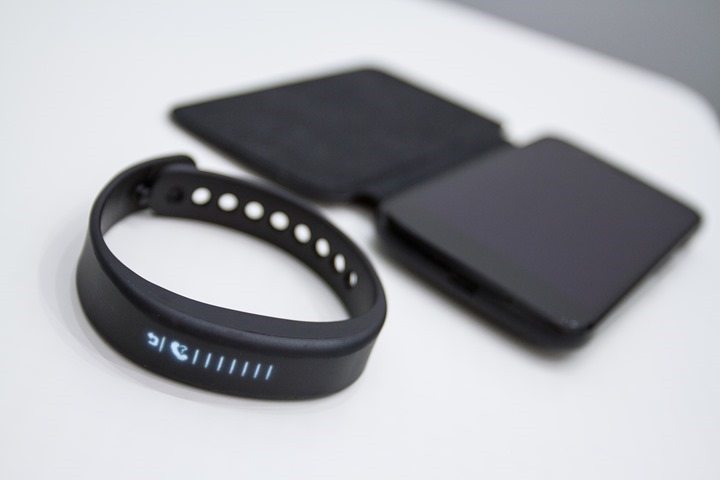 I played around with the find your phone feature a little bit and was fairly impressed with the little distance bar and the rough accuracy of it as I went further away from the phone.

Finally, we’ve got music control.  You can use the app to trigger basic start/stop and next/back track functions, as well as to adjust volume. 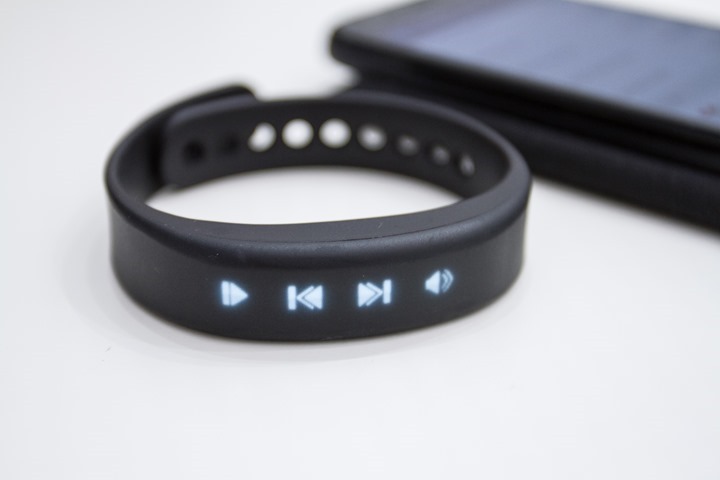 This functionality all uses the native platform controls, so it will effectively work with most applications that leverage that (for example, Spotify).

While the existing Vivofit can connect to any ANT+ heart rate strap, the new Vivosmart can also connect to ANT+ cycling speed sensors. 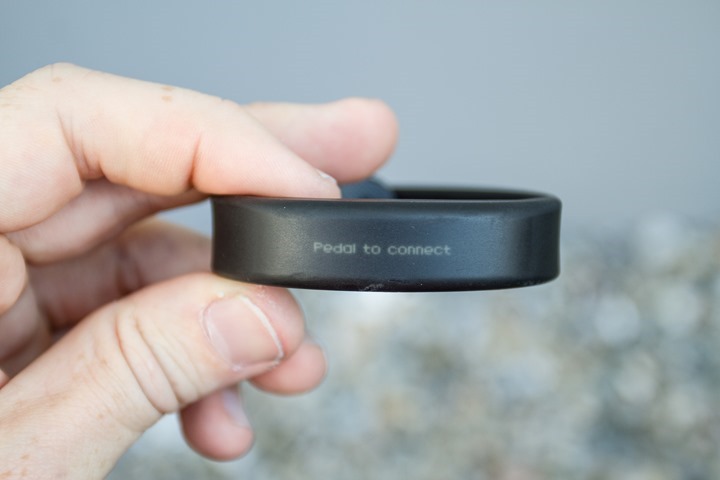 The idea behind this is that folks who go out for a ride can get those activities more accurately recorded.  In this mode the unit will still generate an activity file just like before – but it’ll also include speed and distance (and be marked as cycling).  Previously if you went cycling with the product you just had a heart rate file.

Once paired, the unit will also show speed on the band itself. 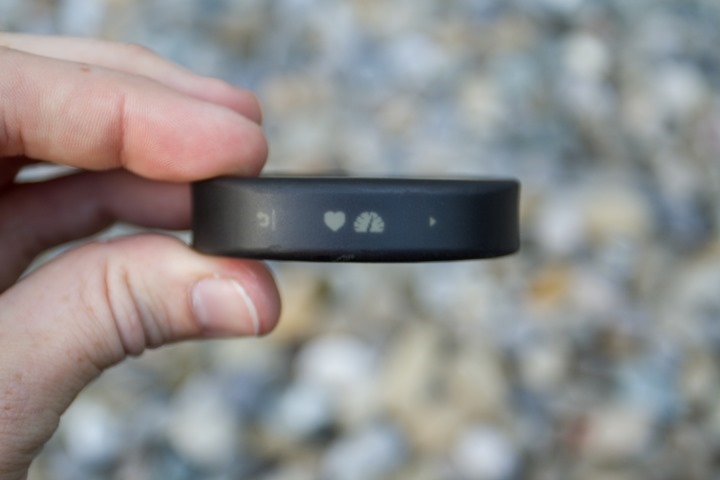 (Update: Below section changed, after further clarification from different folks at Garmin.)

The unit will connect to both an ANT+ speed-only sensor, as well as an ANT+ speed/cadence combo sensor.  In the case of the combo sensor, it won’t use the cadence channel (won’t save/display it), but will still use the speed side of things. 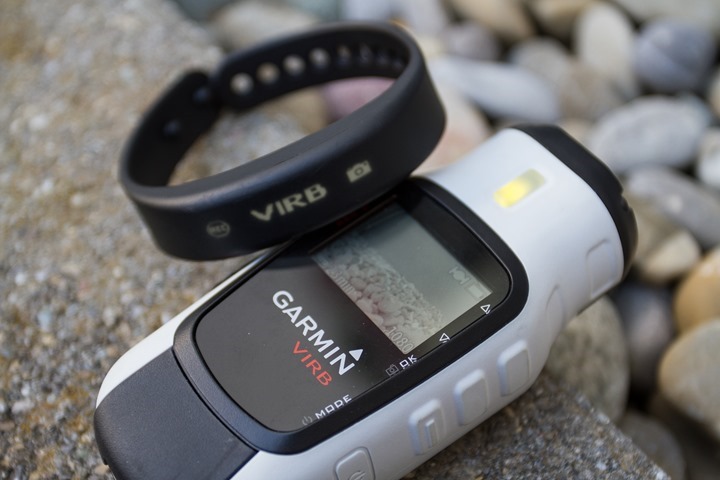 In what is probably the biggest surprise of the unit, Garmin has added the ability to control the VIRB action camera.  You’ll swipe to get to the VIRB menu, which then connects to the VIRB in the same manner as their remote control would (or some watches).

Once connected you’ll have two simple options.  To the right you can take a photo: 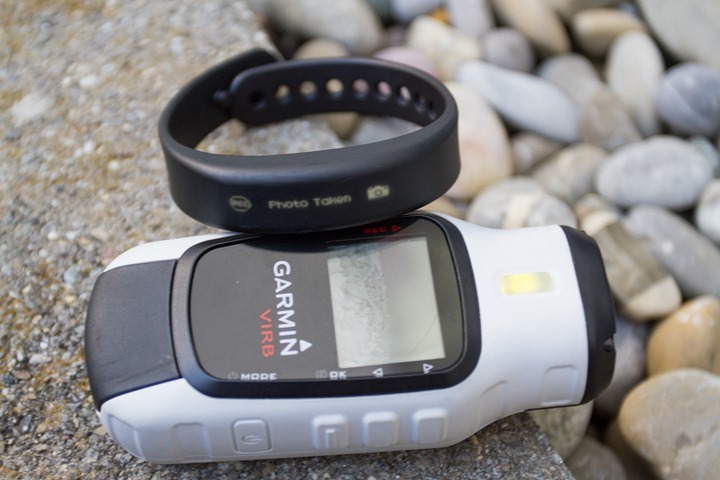 And to the left you can start recording a video: 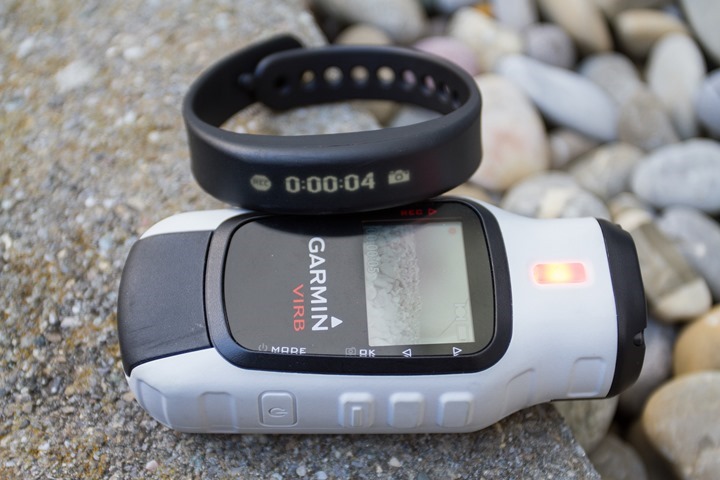 To stop the recording, you’ll simply press the same video button again.  The whole thing worked quite well in my brief testing.

As usual, the data is recorded all within the VIRB, so there isn’t any additional dependencies on the Vivosmart.  And of course if you had a heart rate monitor paired, you’d pair that to the VIRB as well (since the strap can support multiple devices connecting to it).  The Vivosmart can control either the VIRB (regular) or VIRB Elite.

I recognize that some folks have never seen or heard of the original Vivofit, so just to recap very briefly in that department, the unit carries through all those existing features into the new Vivosmart.

For example, you still retain the inactivity bar graph.  It’s just no longer in red, but does display how long you’ve been inactive for.  Now though with the vibration alerts, it’ll also buzz you to get you moving. 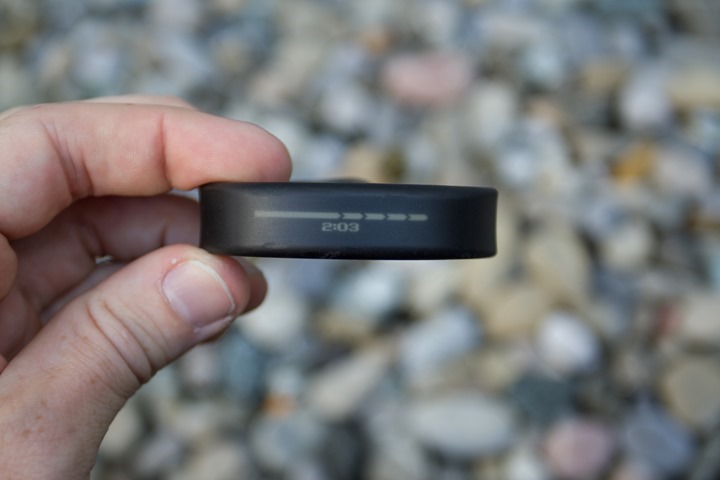 The unit will still display calories burned, and is easily accessible by just swiping left or right on the display – just like before (except it was a button tap then). 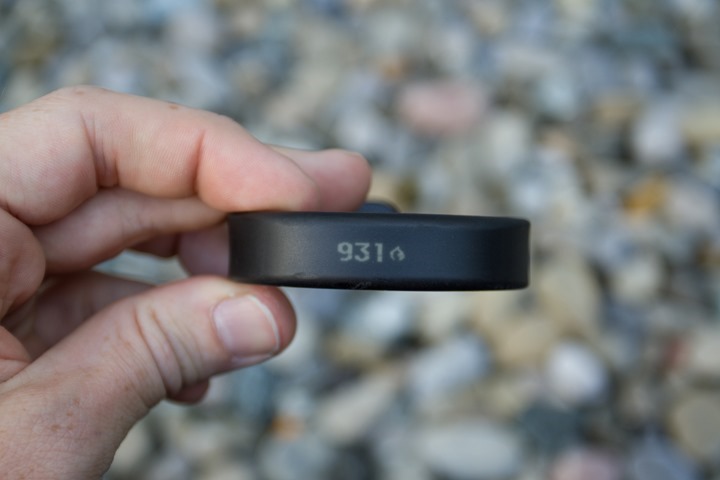 Like every other activity monitor on earth, it’ll display the current number of steps, as well as your distance (i.e. miles). 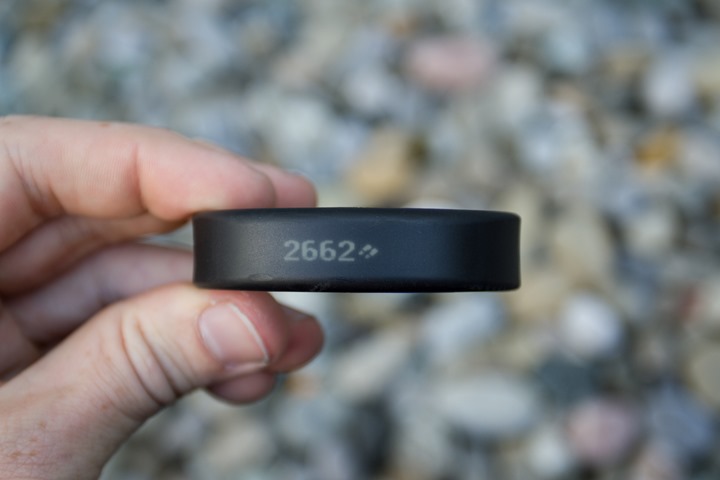 It’ll show you steps remaining until your goal, but that’s now combined with your actual goal number as well.  On the Vivo series, the goal is dynamic and is changed each day depending on the previous few days of trending. 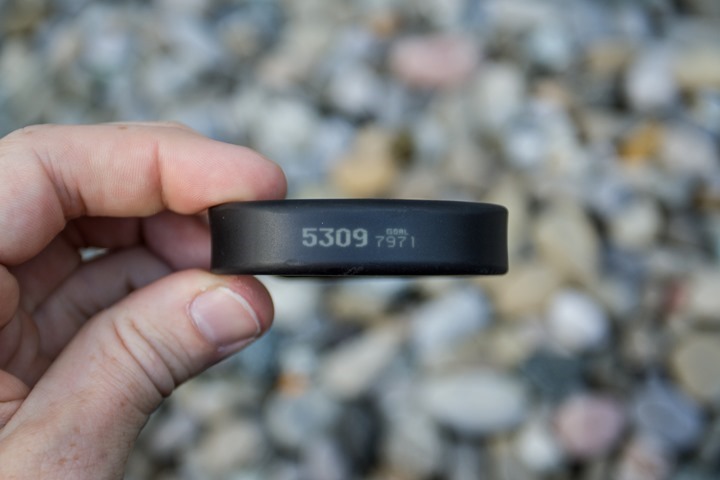 And the unit does include sleep tracking as well, though like the Vivofit that needs to be manually enabled/displayed when you go to sleep and wake up. 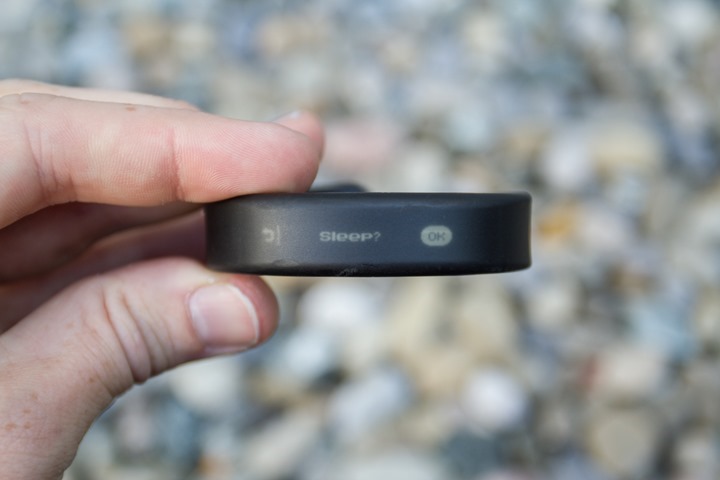 Finally, while in an activity (which is a separate mode to specifically track exercise) you’ll get both your current heart rate and your heart rate zone (as defined on Garmin Connect).  Previously the display showed the same, but it was all condensed together so sometimes a bit confusing. 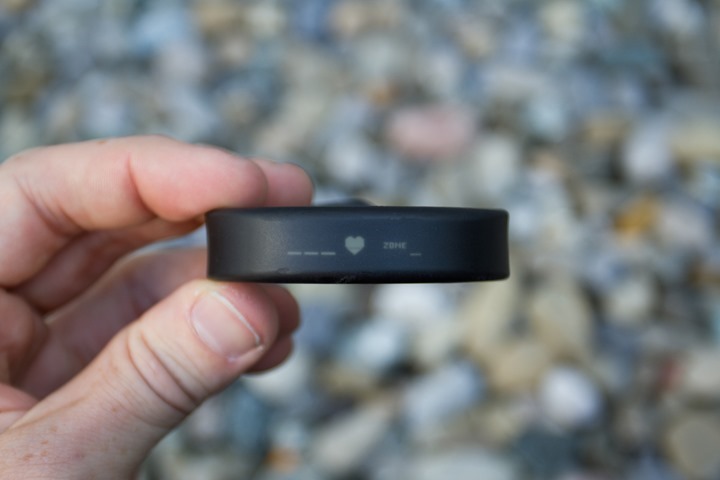 That rounds up all the basics, of course, I’ll dive more into things down the road in a typical in-depth review. 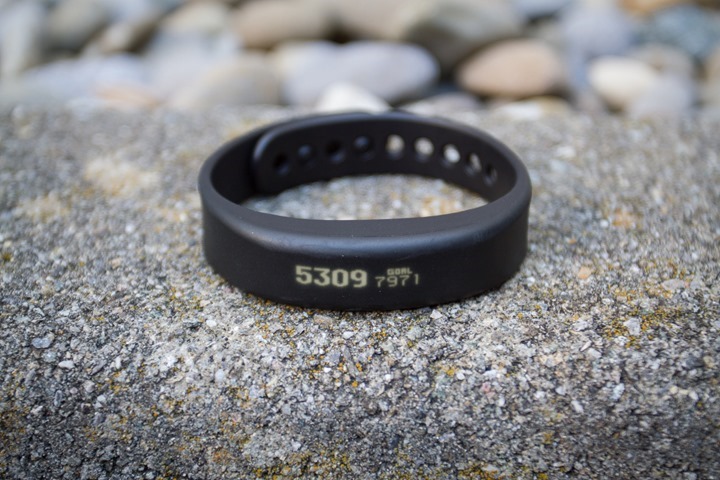 Overall I think the feature set is pretty cool here.  I love the idea of adding the cycling speed sensor support, as that bridges that gap a bit for some people.  And the smartphone notifications seem well done, I’m glad they used the standard notification center there and didn’t do any limiting to specific functions/apps (i.e. just text messages).

Looking at the VIRB support, that’s definitely cool, but I wonder how much crossover there really is between people that buy the Vivosmart and people that buy the Garmin VIRB.  I would have thought adding VIRB support to the Garmin FR220 and FR620 would have netted a far bigger Venn diagram, and would be more likely to drive sales of both products.  So it’s not so much a knock on the Vivosmart’s inclusion of it, as it is the lack of support for it in the running products (outside of the Fenix line). 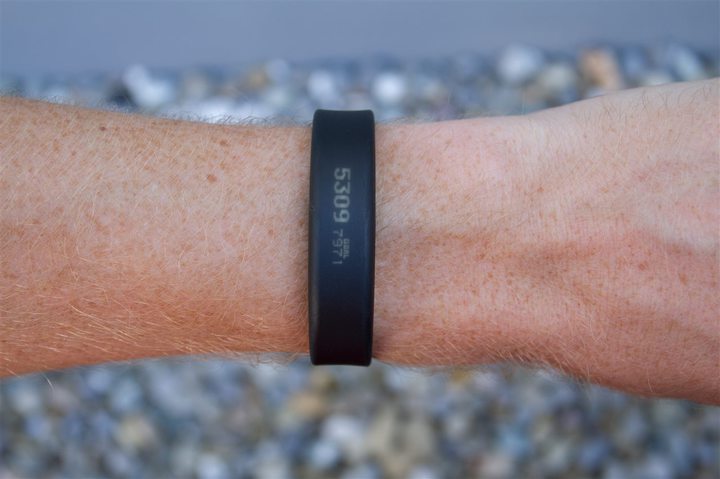 Of course, the new display does take a pretty big hit on the battery.  And while playing with it, I felt the display wasn’t super-crisp, almost a bit hazy.  I’m sure I’d get used to it, but it’s not that super-sharp screen on the Vivofit (even if it does have far more information).

Now I may come to not mind it – which is something I’ll touch on within my full in-depth review sometime this fall.

The Vivosmart will be available in about two weeks, exclusively at BestBuy.com until November.  Pricing is $169US without a heart rate monitor, and $199US with a heart rate monitor.  The unit will come in two sizes (the bands are not changeable like Vivofit), small and large.  And will come in five colors: Berry, blue, black, purple, and slate.  For clarity, I asked about the berry type. It’s a strawberry color with ‘undertones of pink’.  So…check.

Thanks for reading!  Feel free to drop any questions below and I’d be happy to try and get answers to them.