GoPro just released their new Enduro battery, which aims to offer better cold-weather performance, while also lasting longer in regular temperatures. In other words, it’s just all-around a better battery. This battery is compatible with the Hero 9 and Hero 10, and, it’s actually the same mAh capacity as their previous Hero 9/10 battery. All while only costing $4-5 more than the existing battery.

The company has laid out a slew of claims around Enduro battery performance (such as lasting 40% longer), and as usual, if there’s anything I’m good at, it’s repetitively testing something to the point of stupidity. Fear not, with the assistance of beer, Ben & Jerry’s, and (more) batteries – I think I’ve figured this thing out. And more importantly, figured out whether or not you should buy one (spoiler: yes).

Given this is a battery, I’m going to aim to keep this review as simple as possible. I mean, at the end of the day it’s basically just a chart. Still, if you want to see all the battery testing goodness in real-life, check out the video above. Or, you can watch as a certain someone makes a cameo during my recording. Your call.

Note that GoPro sent over a media loaner Enduro battery to test. As usual, no company gets any preview into what I’m writing or shooting, and as usual, it’ll go back to them. Nor do I accept any advertising/money/etc from any companies I review. I’ve since already purchased four new Enduro batteries at full retail prices for my fleet. If you found this review useful, you can use the links at the bottom, or consider becoming a DCR Supporter which makes the site ad-free, while also getting access to a mostly weekly video series behind the scenes of the DCR Cave. And of course, it makes you awesome. 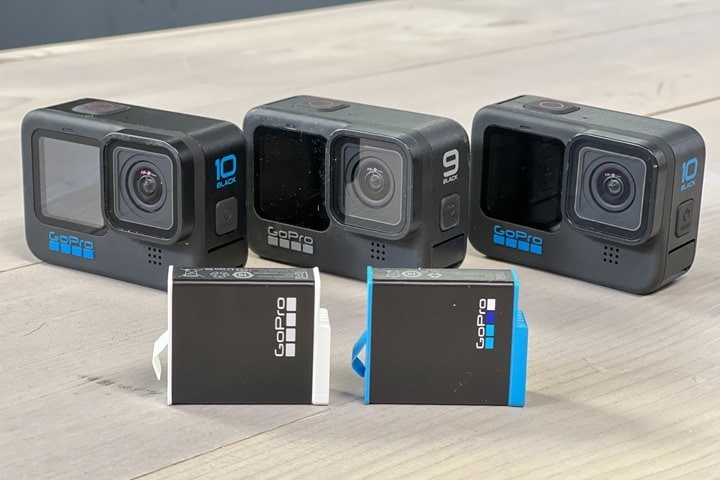 In my case, I received the battery slightly ahead of public release, and thus it didn’t come in its official/final packaging. When my retail batteries arrive tomorrow, I’ll include the final packaging shots here. Until then, here’s the battery from all its glamourous sides:

The main/easy way to tell the battery apart from a regular Hero 9/10 battery is the white cap, versus the normal blue cap. Pricing-wise, the Enduro battery retails for $25, versus the regular battery at $20. However, keep in mind that GoPro Subscribers (that thing you likely got included when you bought your recentish GoPro), knocks 20% off that. So the Enduro battery ends up at $20, and the regular battery at $16, which for those either math or coffee-challenged this morning, is a $4 difference. 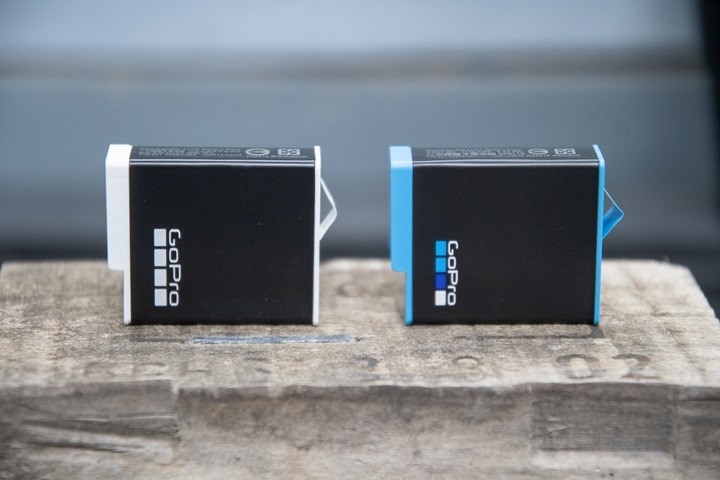 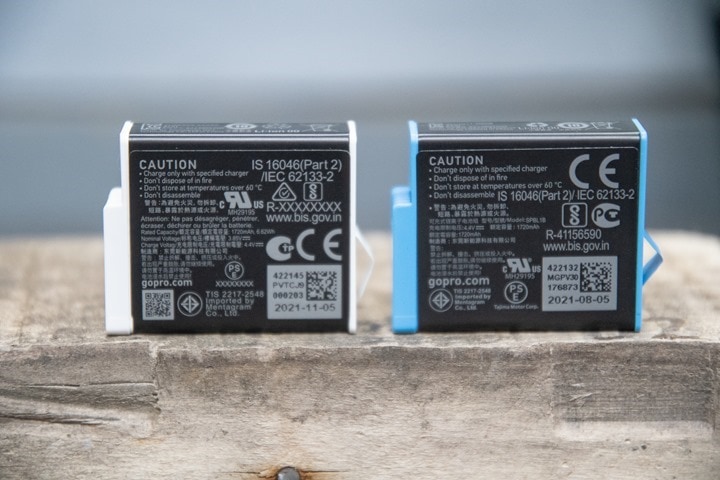 Most interestingly though, the stated mAh of this battery is identical to the regular battery, at 1720mAh. And even more interestingly as we’ll see in a second, the extended battery time gains only appear at the higher resolutions – not at 1080p. Likely meaning that all of the changes here are likely more to do with things like thermal controls and regulation that typically heat up the GoPro more at the higher end. Of course, similarly, since the battery claims more reliable cold-weather performance, there’s undoubtedly some black magic to deal with that too. And, as you’ll see, that cold-weather performance is pretty impressive. 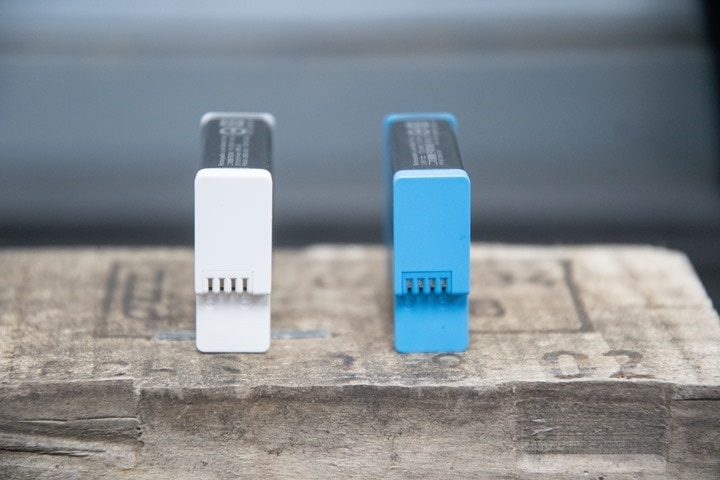 So, what are the claims? Well, there are really three specific sets of claims. The first is that it charges up to 13% faster. Which…ok, fine. The second and third though are the big ones. This second set discusses the cold-weather performance, which, for accountability/historical sake, I’m going to screenshot GoPro’s official page/specs here: 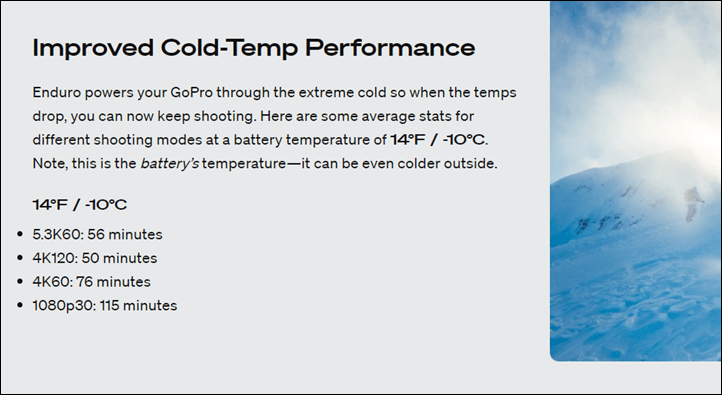 I like screenshotting things like this, not just because it saves me time, but because if a company ever changes something – I have a record of it. Not that there’s anything wrong with changing things (such as changing for the better), but look…I’m basically a digital packrat. 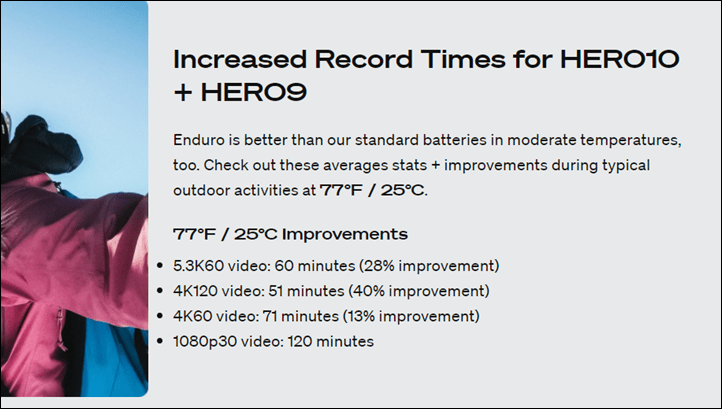 Now, with all that baselining out of the way, let’s start testing. 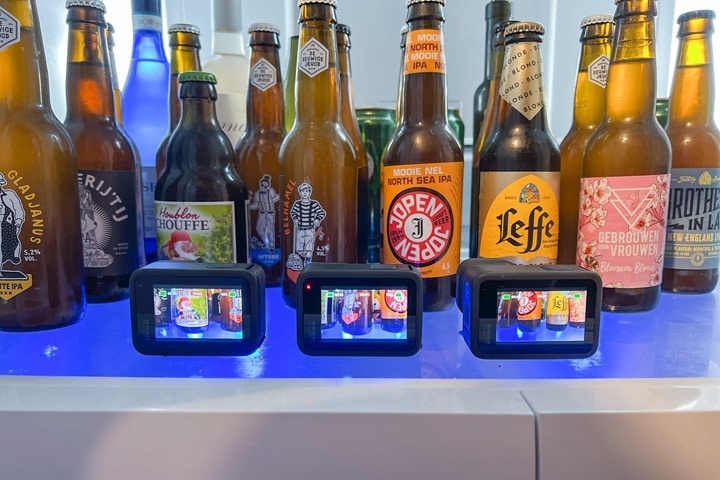 Essentially, I was interested in three core test categories:

In this case, I’ve skipped the overheating category, since I’ve got an entirely separate video/post I’ll revisit that. Plus, the last time I did that, I ended up doing 40+ tests and spent a week of my life charging and trying to kill GoPro batteries. Also, since I only had one Enduro battery, I wanted to do 2-3 cameras/batteries at once with different settings to save time. Thus, waiting for my order to arrive.

In any event, for the ice-cream level cold testing, I used three different freezers. Two at home and one at the DCR Cave. All of which hovered at roughly –4°F/-20°C to 0°F/-18°C. I validated that with my nifty pizza oven laser thermometer. I mean, I use it for official things like measuring overheating action cams, but like any true Alton Brown kitchen tool, it’s a multitasker. 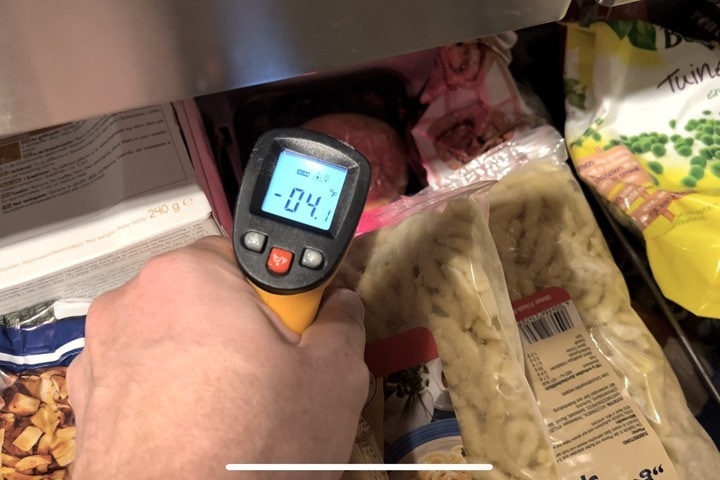 Starting with the first time, just putting the camera in the freezer at various resolutions I found:

However, the most interesting test I did was when I left fully charged batteries inside three cameras overnight in the freezer for 7 hours. The cameras were powered off (using the button) and left there.  So the exact same scenario as walking out of a ski lodge with a helmet camera or such. I wanted to see how well they handled after being in the cold for extended periods of time before needing them for recording. 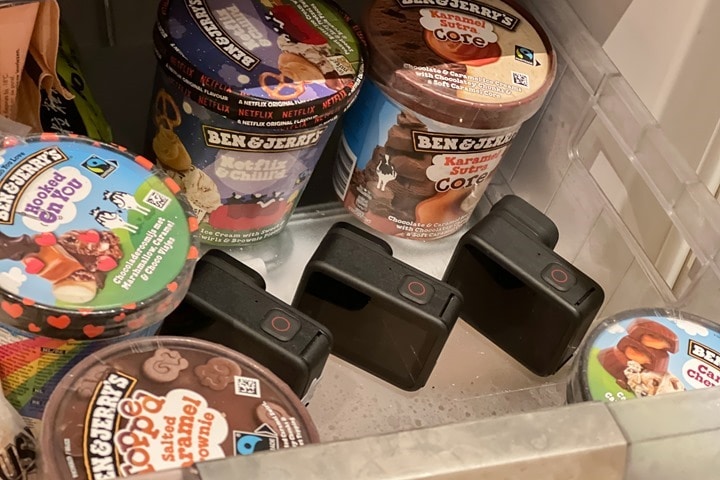 And what I found was fascinating when I went to power them on in the morning (7 hours later at 0°F/-18°C):

How cool is that? It literally powered up and instantly started recording. That alone is worth the $4, let alone any battery gains.

Now, I did a slew of similar tests in the fridge too: 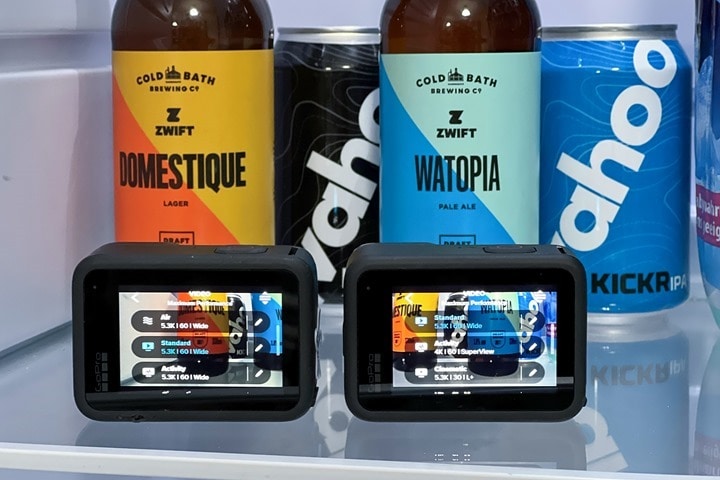 Followed by some outdoor testing. These started outside on a table and then went for my morning commute both inside and outside the cargo bike. 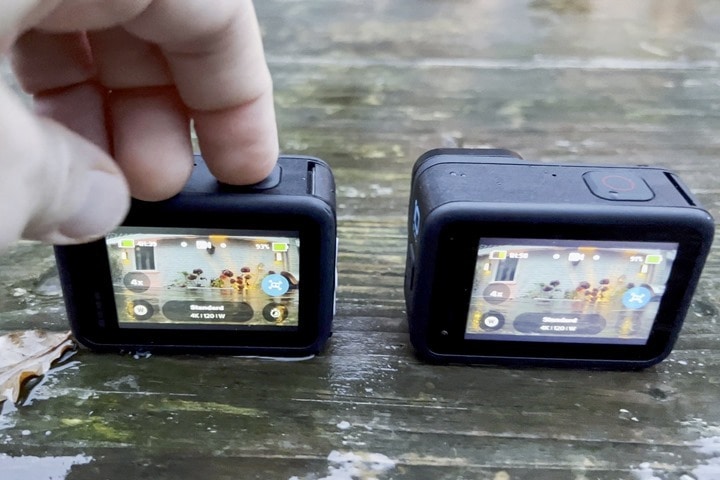 Followed by some ‘normal temp’ testing (trying to emulate the spring weather conditions GoPro outlined). In this case, I also used a fan on low barely moving the air around, since I didn’t want to do overheating testing. GoPro’s wording specifically noted during activity, which implies airflow (and again, I dove deep into the importance of airflow previously, and will again soon). 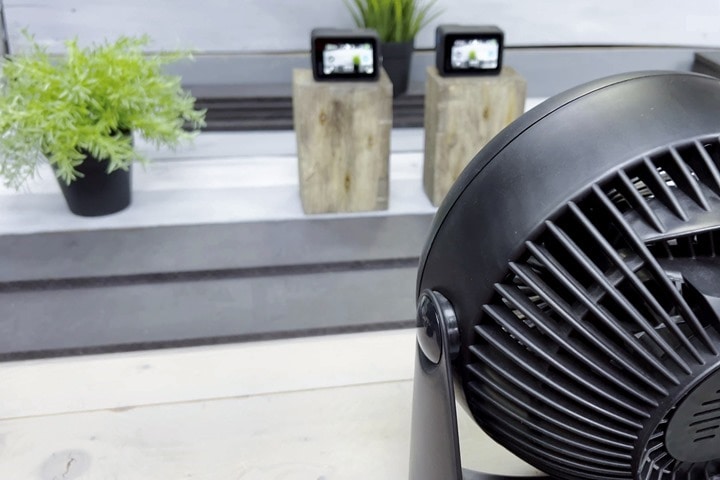 And to save you trying to decode a bunch of lines of tests, here’s my nifty Excel chart. Basically, the Enduro battery performed almost precisely on-spec (usually +/- 1 minute). Note though that GoPro’s temperatures didn’t exactly match mine. In fact, mine were harder (colder). But hey, I’m all about making this difficult.

Finally, the last test was the faster charging times. And I found this one really difficult to validate. So much so that I went back to GoPro with confusion, asking for clarity. And it turns out the 13% improvement claim actually comes from using the GoPro Hero 10 as the charging device. I was instead using the GoPro Dual-Battery charger (which is usually faster). And indeed, that dual battery charger is faster, but not if you have two batteries in it. 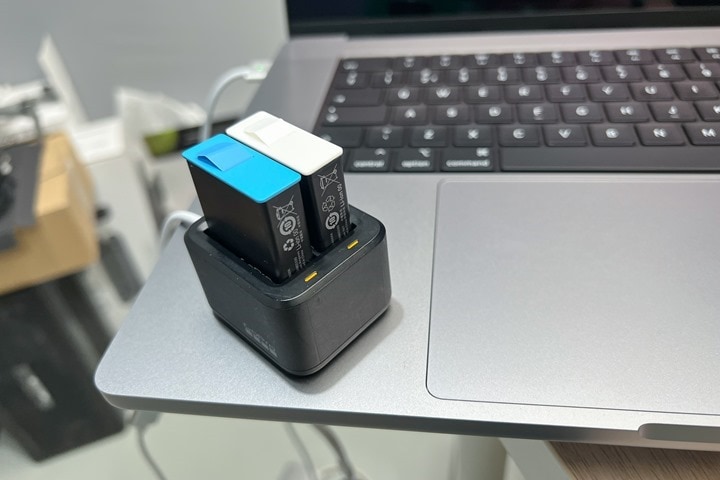 See, I was sticking both freezer-depleted batteries in the dual-battery charger (both Enduro and Regular), and then walking away. And most of the time, the regular one finished first, and then the Enduro was only at like 40-50%. GoPro came back and clarified that the dual-charger works by charging the battery with the highest percentage with priority. And while both batteries were at 1% remaining most times, in reality, the Enduro battery was probably just a fraction of a percent lower, so, it didn’t get priority.

Anyway, here’s some data GoPro sent over that I’ve Excellified with the spec times for these different scenarios:

My charging results when single-charging a battery seem to match those estimates. But now that I’m armed with that chart, I’m going to do some unnecessary testing with my incoming fleet of batteries and the couple of dual-battery chargers I have to validate that.

Ultimately, I do wish these batteries charged faster. If I look at batteries across the landscape of devices I own, I can’t think of a battery that charges slower than that (ok, actually, the new Whoop 4.0 band does, barely does – but using wireless, which is to be expected). This just seems super slow for 2021 (going on 2022).

Still, setting aside that charging annoyance, from a battery duration and cold-weather performance, these easily slay the existing batteries. 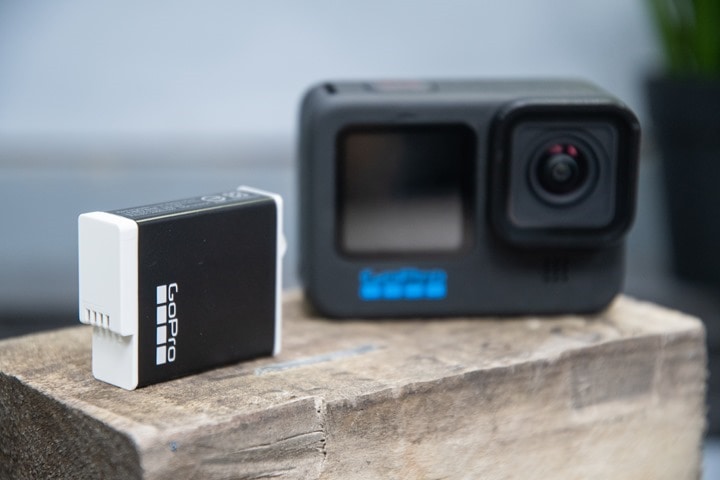 As I said in the video, buying these batteries as spares over the existing batteries is pretty much a no-brainer. At $4-5 extra for the higher-performing batteries, it’s an easy choice. They either met or exceeded all of GoPro’s specs that I could test and did so at what’s a minimal cost.

For cold-weather sports especially, not just the battery duration extensions, but arguably more important the standby/off performance is even more key. To know that even in some of the coldest weather the GoPro will just turn on and record without fuss is a big deal for a lot of people spending time in the mountains (or, just Finland).

Now, my hope is that come September 2022, when GoPro will undoubtedly announce a GoPro Hero 11 (as per their normal annual release cycle), one would hope this is the defacto/standard battery. Partially because that’d be the right thing to do, and partially because it’d be the smart business thing to do. From a marketing standpoint, they’d literally be able to claim these 40% battery increases immediately on a Hero 11 camera. Plus any other battery savings that may or may not happen. At a time when their competitors are announcing worse battery performance, this would be doubling down. And I’m sure they could asterisk those battery increases nine ways to Sunday, to be transparent of course.

Till then, whether you have a Hero 9 or a Hero 10, this is an easy item to ask for under the tree, or in the stocking, or just as a Friday night Festivus gift to yourself.

At the end of the day, I’m an athlete just like you looking for the most detail possible on a new purchase. These posts generally take a lot of time to put together, so if you're shopping for the GoPro Hero 10 Black or GoPro Dual Battery Charger (Hero 9/10) or any other accessory items, please consider using the affiliate links below! As an Amazon Associate I earn from qualifying purchases. It doesn’t cost you anything extra, but your purchases help support this website a lot. Even more, if you use Backcountry.com or Competitive Cyclist with coupon code DCRAINMAKER, first time users save 15% on applicable products!