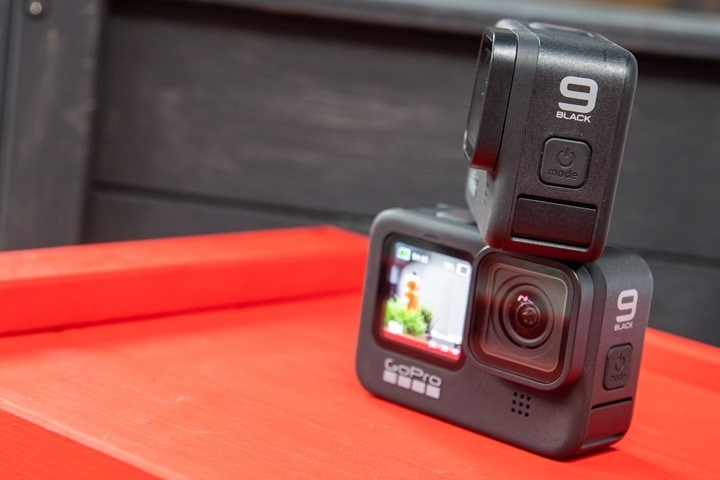 While I’m still a few days away from a final written review of the GoPro Hero 9, I’ve dropped my complete video review over on YouTube already, and it’s absolutely packed with details, video, comparisons, and data. Aside from all the usual swim/bike/run/hike/etc testing locales, the cameras even spent the night in my deep freeze. They’ve been busy.

So, till that final text review hits – here’s everything you need to know about the GoPro Hero 9 in one sub-15 minute watch session:

But, if you’re still looking for a bit more text, then keep reading.

I’d argue that in terms of pure features, the Hero 9 is by far the biggest upgrade to the GoPro Hero series. Though, that doesn’t quite mean it’ll have the biggest upgrade impact for everyone. For example, I’d also argue that if you had a GoPro Hero 6, the shift to Hero 7 or Hero 8 was by far the most substantial in terms of image quality or stability. It was at that juncture GoPro left the competition in those regards.

Still, the list for today is huge. In case for some odd reason you didn’t hit the ‘Play’ button above (seriously, you should), here’s all the newness:

Oh, and yes, the camera is still black in color. Also, the mount stays the same.

Phew. Lots and lots of stuff. Ultimately, while the camera is heavier, I honestly never noticed except when holding them side by side. It’s just not a factor in any meaningful way except perhaps if you were head-mounting it, and even then that’d be pretty questionable in terms of noticing after more than a few minutes.

As for the batteries, while it is annoying that the Hero 9 has new batteries, I will say that the claims do hold true. In my hours and hours and hours of testing the Hero 8 and Hero 9 side by side, every time the Hero 8 battery ran out well before the Hero 9 did (both when on identical modes and otherwise). Which ultimately comes down to the battery just being a chunker in comparison to the older ones. Thus at least the battery change was functional in that I got something out of that situation, rather than just change for the sake of change.

But I cover that in the video too.

Until then – enjoy all the footage above, as well as the huge compilation video below, which is honestly more an insight into what I’ve been up to the last few weeks, with 2-4 action cameras concurrently mounted at all times. It’s fine.