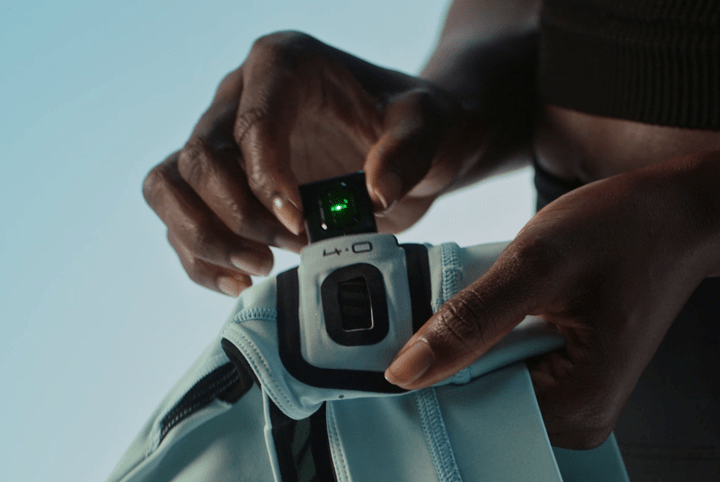 Today, Whoop announced their new 4.0 sensor/device. Whoop is part-device, part-platform. The device is a small pod that doesn’t display any metrics itself, but rather has sensors to collect those metrics and transmit them to your phone and the larger Whoop cloud platform. Historically that’s been heart-rate driven data, but the new 4.0 pod includes blood oxygen levels and skin temperature. Once in the Whoop platform the company provides boatloads of data around what they dub ‘strain’ and ‘recovery’. In other words, how much/hard have you been working out, and how well are you recovering.

And while Whoop’s platform/software has largely been fantastic and innovative, the optical heart rate sensor within the Whoop 3.0 band could only be described as a dumpster fire. And thus, as the saying goes: Crap data in, crap data out. No amount of analytical processing could fix the flaming river of bad data into the platform. I talked about this at length in my review, and some 346 comments since then confirmed this by everyone else. Literally, nobody has managed to show me a single good hard/interval/etc workout with accurate comparative HR data. And yes, I’ve actually continued to wear the Whoop 3.0 sensor since my review.  And with 379 workouts worth of data in every possible body location, compared to 2-4 other heart rate sensors per workout, and 531 ‘recoveries’. I’m pretty sure nobody has as much comparative data as I do on this thing. Which, means I’ll be well suited to talk about what, if anything, has changed on the 4.0 edition.

Whoop’s new 4.0 sensor is apparently all about improving accuracy of that data (as well as adding more data). We’ll get to those technical bits in a second.

First though, the new sensor isn’t actually the only announcement today. The second bit is that the company is making apparel to hold said new sensor pod. This includes everything from shorts to sports bras, compression tops to leggings. Plus some other new bands (details down below).

Finally, while I don’t have a new Whoop 4.0 sensor quite yet, I’m told one is on the way to me very shortly – where I’ll be able to put it through its paces. Given Whoop reached out to me ahead of this announcement, I can only assume they’re optimistic that they’ve solved their accuracy issues. Else, they’ll end up with another review like last time. I’m simple that way.

So let’s dive into what’s new in terms of the Whoop 4.0 hardware. Note that while there’s also set to be a complete revamp of the Whoop app interface, that’s not part of today’s initial announcement. So I’ll cover that once it happens.

Here’s the new Whoop 4.0-specific features (all of which are hardware-driven):

– New sensor: This now has 5 LED’s (3xGreen, 1xRed, 1xInfared) compared to the previous 2xGreen. It now has 4 photodiodes, versus the 1 previously.
– Added Skin Temperature: We’ve seen this on a few wearables over the years, and is often used with sleep data
– Added Blood Oxygen monitoring: Measures SpO2, which is often used in both sleep-related data and high altitude data
– Added Sleep Coach with on-device alerts: This will wake you up based on optimal sleep cycles
– Added haptic motor (vibrations): This means the band can now alert you to things, starting with waking you up via Sleep Coach
– Added “Health Monitor”: This is more of an app dashboard thing, which shows live HR/skin temperature/blood oxygen/resting HR/HRV/respiratory Rate
– Added PDF Export of Health Monitor: This allows you to export out your Health Monitor dashboard metrics in a PDF for doctors/sports staff/etc in 30-180 day chunks.
– New Battery Design: Whoop says that they’re the “first product in the world” to use Sila’s new Silicon anode battery, which has 17% higher energy density and longer cycle life
– 5-day battery life: The unit maintains the previous 5-day battery life claim, despite the unit being much smaller
– New Whoop Battery Pack: This new pack is waterproof (woot!) and allows a double-tap for battery level
– Smaller size: Whoop says it’s now 33% smaller than prior

Many of these new measurement metrics are pretty much table stakes for wearable devices these days. Most of the new data metrics seen above have been on some combination of Apple/Garmin/Fitbit/Samsung devices for years. In the case of skin temperature, we first saw that waaaay back when on the Basis B1 device. Remember that? Arguably Whoop before Whoop as a concept even existed. Intel of course killed that. 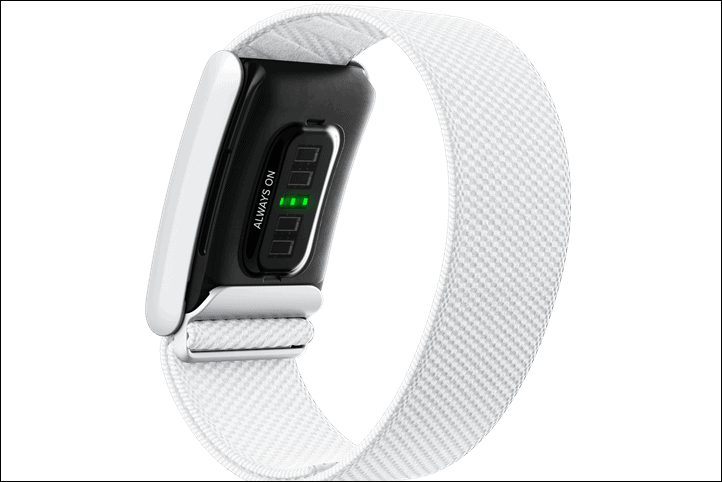 The problem though was that sometimes (ok, a lot of times), you’d put on the battery pack and then forget about it, and then jump in the shower. The unit itself has a small micro-USB port on it, which then let in water. Now despite me very-much-not-purposefully showering with it probably half a dozen times, it survived till the 7th time. Then it died and I had to buy a new one. Still, props for lasting that long. In any event, this resolves that. 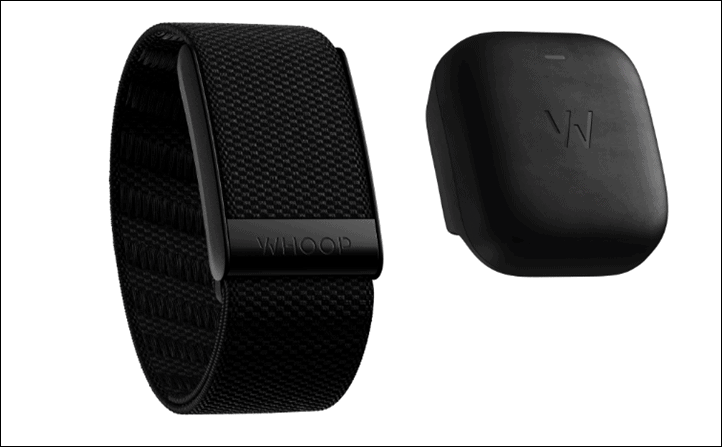 Now, as you may remember from my review – I said there were three critical changes that I felt Whoop (3.0 and the platform as a whole) needed, all three of which are tied together a bit. They were:

A) A new optical HR sensor: Self-explanatory
B) The ability to delete/nullify inaccurate data: This is important if/when the sensor thinks that doing the dishes is a hard interval workout, as it spikes your strain value for the day and there’s no way to purge it.
C) The ability to pair to an external HR sensor: This is/was important for workouts where the Whoop sensor didn’t work well

Obviously, B & C are largely due to A’s issues. So I asked Whoop whether or not they had implemented either of the other two in the app (since that has nothing to do with the hardware itself), and unfortunately, neither have changed at this point. Whoop says that “members will not be able to edit an activity to remove a heart rate measurement they may feel is off (i.e., the HR spike you mentioned). WHOOP is still its own wearable and the app will not sync with another device like a chest strap.” This is unfortunate, but perhaps the new sensor will eliminate this enough to be on par with other wearable companies where it’s less of a concern.

Here’s a quick look at the new Health Monitor dashboard, where you can see both the current values as well as your normal values. 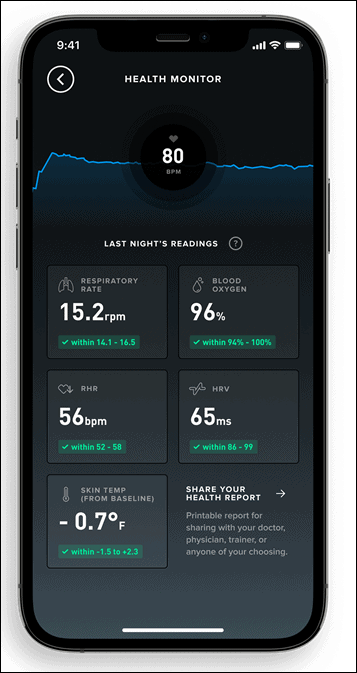 In terms of pricing, existing Whoop members will be able to get the Whoop 4.0 pod for free, as long as they have at least 6 months left on their membership. As a reminder, the Whoop device doesn’t really have a set price – rather, they have a minimum membership payment. Roughly speaking though, it works out to $180/device, since the minimum monthly membership is 6-months at $30/month. As long as you have at least 6 months left, then you can upgrade directly from the app or site, and units will begin shipping September 27th. 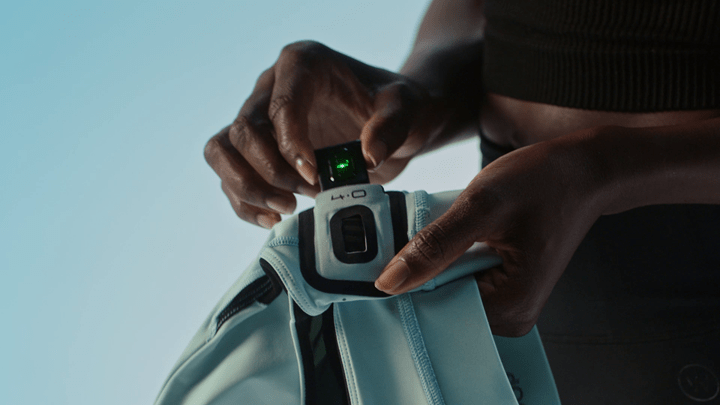 Next up is Whoop Body, which is essentially a line of apparel that holds the Whoop sensor. At first glance, you might think this is an apparel play (and yes, that’s true too). But in reality, this is probably more of a sensor accuracy and membership retention play. Remember: If people take off their Whoop and forget to wear it, then Whoop’s $30/month membership near-instantly becomes useless.

While the Whoop band is very comfortable, there are many scenarios where it’s just not super practical – either for comfort, or for accuracy (or even sport regulation-wise). All of Whoop Body’s new garments aim to hold the Whoop sensor against your body so that the sensor is still useful. Further, the unit claims to know which position on the body the sensor is placed. Whoop says that is via their “Any-Wear” detection technology built into the garment itself.

There are  few different things at launch:

The new bands are slightly different. The company says the SuperKnit band comes pre-threaded, and thus will have longer durability. Whereas the HydroKnit band is designed more for water sports and is faster drying. Anyone with a current Whoop strap knows the ‘FML’ moment when post-shower you lay your wrist near your thigh/crotch (such as sitting on a couch), only to have the Whoop strap soak a large wet spot there – realizing it a minute later. Hopefully this will dry faster. 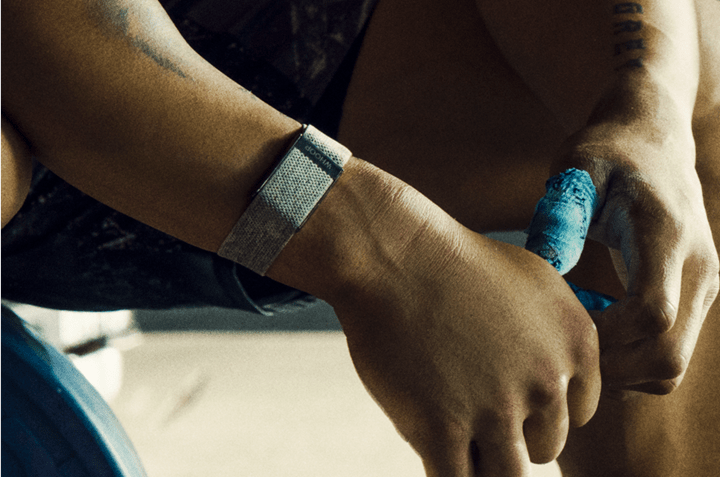 Again, this post is most definitely not a review. That’s obvious by the title which lacks the word Review, but also by the lack of any data to corroborate Whoop’s claims. So, once I do have sufficient testing data/time, I’ll be looking at largely one core thing: Is it finally accurate? Or at least, accurate enough.

I say ‘enough’, because that’s probably a more important thing here. Very few optical HR sensors are perfect 100% of the time. Just as chest straps are rarely perfect 100% of the time. I’ve tested enough to know that. Instead, what I want to know is whether or not it’s correct enough as to not meaningfully skew the outcome strain and recovery stats. The core issue with the Whoop 3.0 sensor is that it vastly undercounts intense efforts (due to overcompensatingly conservative algorithmic smoothing), while often incorrectly picking up non-existent activities as intense efforts. This meant that truly hard workouts aren’t accounted for properly, while doing the dishes merits the equivalent strain of 32×800 on the track. If Whoop can achieve accuracy on par with the more recent Apple/Garmin/Polar optical HR sensors (which, aren’t perfect, but are far better than the Whoop 3.0 sensor), then it’s likely good enough for the vast majority of use cases.

If Whoop has managed to pull that off with this new sensor – that’ll be a big thing. It still doesn’t solve for whether or not it’s worth $30/month, but that’s something we can dive into the full review (as well as whether the nightly Whoop recovery score is more accurate).