Strava is testing a new feature to some 50% of their user base that allows people to mute an activity of their feed when publishing. The idea being that many of us might have more trivial workouts or even commutes that we want on Strava for historical/challenge/segments sake, but don’t really want to clutter our friends’ (or club’s) feeds with them.

A good example with commuting would be someone that might want to accumulate progress towards a segment’s Local Legend status or challenges, which only happens when their activity is public. However, they don’t really feel like publishing their twice-daily rides to work to everyone else’s feed is that interesting. Which, without any creative titles/photos/etc, can be basically akin to publishing that you ate oatmeal every single morning and afternoon on your Facebook feed, though I suppose people do that too.

Another simple example would be separated cool-down rides on Peloton, especially for folks that have all new workouts be automatically set as public. These 5-10 minute rides are usually the type of thing I delete from my Strava profile, and don’t bother to publish/set public.

In any event – the new option is available to both paid and free Strava users, though only 50% of the population has access to it. And ironically, it’s actually not enabled on my account, but is on my wife’s account, as well as a few friends’ accounts. You’ll see the new toggle at the bottom of the activity page:

This then skips publishing it to people’s home feeds or club feeds. It will still appear on your profile though, and still counts towards goals and competitions, as well as your 12-week progress chart. It’ll still count towards segments too.

Now of course, as a result, it’s likely you won’t get many kudos, since it won’t show up in other’s feeds – thus someone would have to actually go to your profile to find it (or, have it show up as a group activity). As a reminder, the ‘Feed’ is the thing that you see on the ‘Home’ tab (at left below), where yours and other workouts show up, versus your ‘profile’ (at right below) is where people can see your specific public details:

Now you can change the setting of this toggle after the fact. For example, if you forget to toggle it initially you can always do it later and it takes immediate effect (I’ve tried it in both directions).

There’s not much more for me to say on this topic, it’s a very simple – and much-appreciated feature. I can’t wait until it’s actually available on my account. As a point of reference, here’s what my Strava profile actually looks like right now – with approximately zero of those activities or workouts toggled to public. Some simply because some of them are throw-away tests that I’d never make public anyway, but many because they’re shorter workouts that I don’t want to clutter people’s feeds with. This option solves that perfectly for those that are at least worthy of including in a public profile. 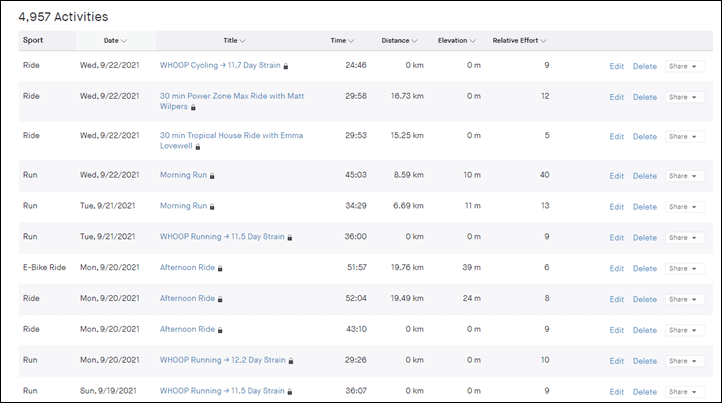 (As usual, all my activities are private by default in Strava, and then I manually toggle to public those that I want, when I get around to it.)

Of course, there’s still two variants of this option that people have long asked for:

I think the first one (own-activity category mute defaults) is a very logical progression of this feature. Especially around commutes. Whereas I think that other-people broad category mutes sorta defeats the purpose of what Strava is: A social network for athletes. I know that it does annoy some people to have to scroll an extra half a swipe past a Zwift or Peloton workout, but I mean…that’s kinda the point of a social network, right? To see what other people are up to. After all, you followed them. If that person is a serial empty-activity poster, then simply muting that particular individual is probably the better bet.

In any case, I’m looking forward to getting the new option – and plan to start using it once available. Though, in asking Strava, they did say that the 50% population user test is set to run for about 4 weeks before they decide whether to go forward with it or not. While I appreciate the concept of testing here, I’d argue that when you roll out a feature to 50% of the user base (some 45 million users out of 90 million users), that there’s probably a no-take-backs clause that Strava might need to better understand.