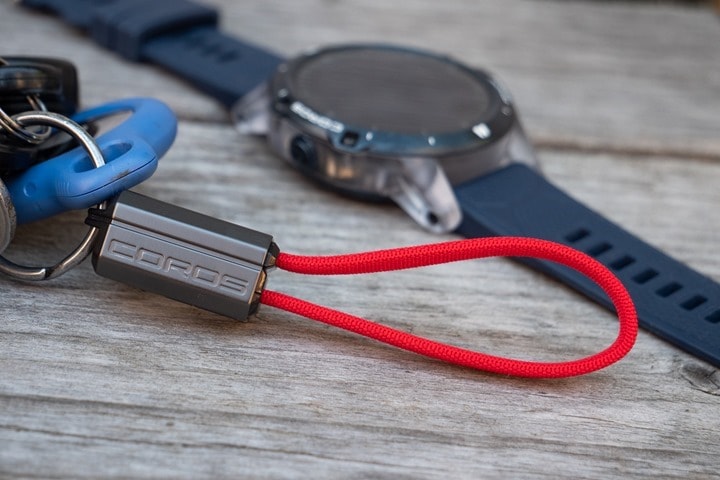 In most cases, these creative solutions are not from the company itself. For example, there’s the $9 twofer Garmin puck charger I wrote about, or that time I bought pretty much every type of Apple Watch charger I could find on Amazon (I haven’t quite written about that yet, but research is going well). These solutions are almost universally better than what the companies make themselves, primarily because they’re almost universally cheaper.

In any event, COROS’s big news today is some training load and recovery stuffs. And that’s all fine and dandy. But what I’m here for is the charging cable keychain. Did I mention it’s red, titanium-looking silver, and black?

Yup, we don’t even need to test whether or not this thing works – it’s already a winner in my book. Though, the $25 price tag is a bit…umm…pricey.

The device is relatively simple, and has two pieces that detach from each other. First, there’s the charger shell, which stays affixed to your keychain: 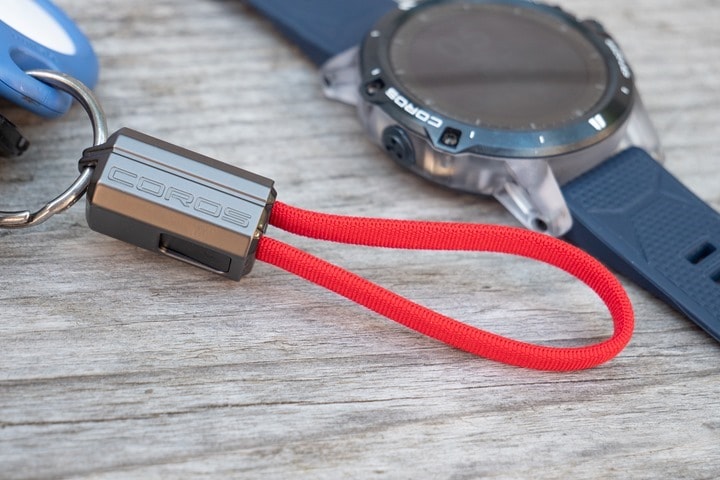 Then, there’s the charging cable guts, which pops out of the shell when you press the side button, revealing the nylon cable with a standard USB port on one side, and the three-pole COROS charging port design on the other: 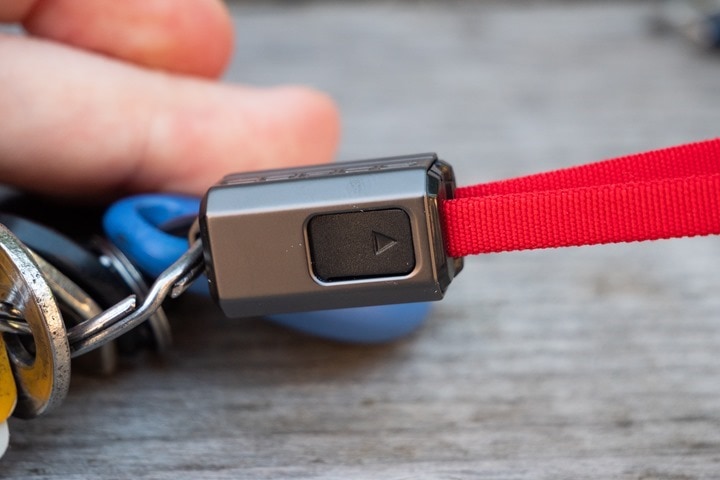 The USB cable side is a naked USB plug design, meaning that it doesn’t have a secondary shell around it. We’ve seen this before from various companies in the sports tech space, including Polar, Nike, and I think even TomTom. It works just like a regular USB plug, except..well…naked of a case. 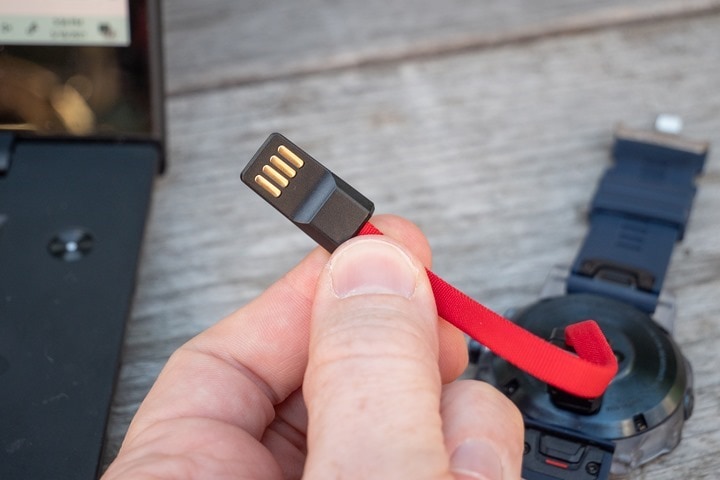 On the COROS side, this pops into any COROS watch, which all use the same three-pole attachment system. The fit was snug, but not overly crispy either. 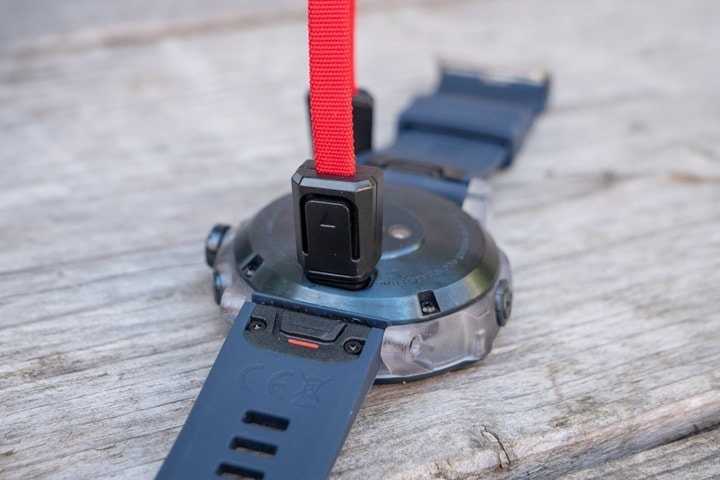 The entire cable length is essentially the same length as the bottom of the band to the top of the watch body: 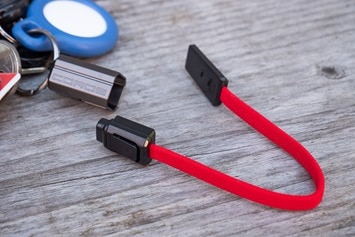 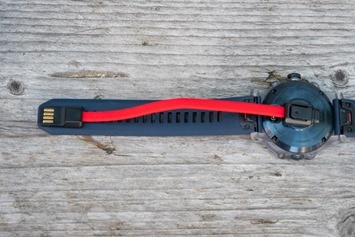 Charging is at the normal speed, no differences there. 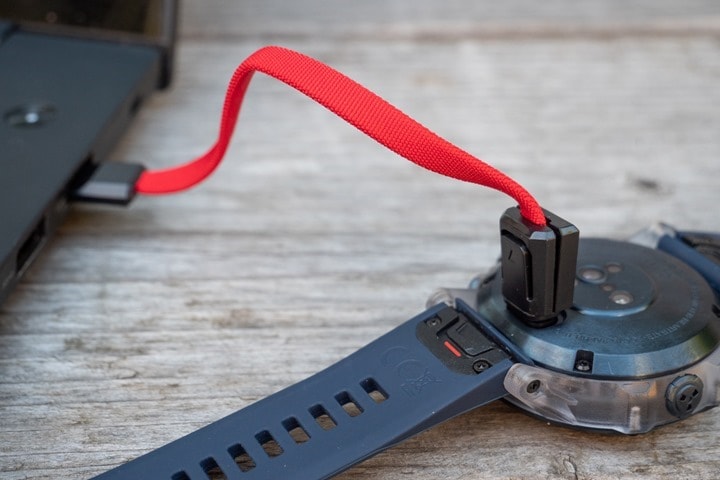 And with that, this review is done. Seriously, there’s nothing left to do except stick it back in its home: 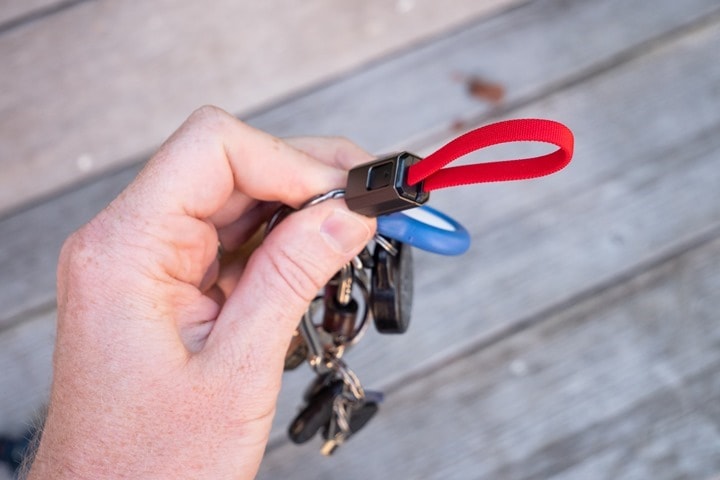 (Side note: I feel this post would be incomplete if I didn’t mention some black magic that COROS did with respect to shipping this a few weeks ago. They e-mailed me at 10:32PM on a Friday night European time, confirming my address in Amsterdam. Then, on Monday morning at 8:52AM, the box arrived by my always prompt UPS man from China. I mean, the box was shipped from China, not the UPS man. He’s very much Dutch. And also very much perplexed at the wide assortment of massive and tiny boxes he has to drop off each morning, as the first stop on his route. In any event, how is it that COROS can manage to get a box shipped 9,234km on a weekend is beyond me.) 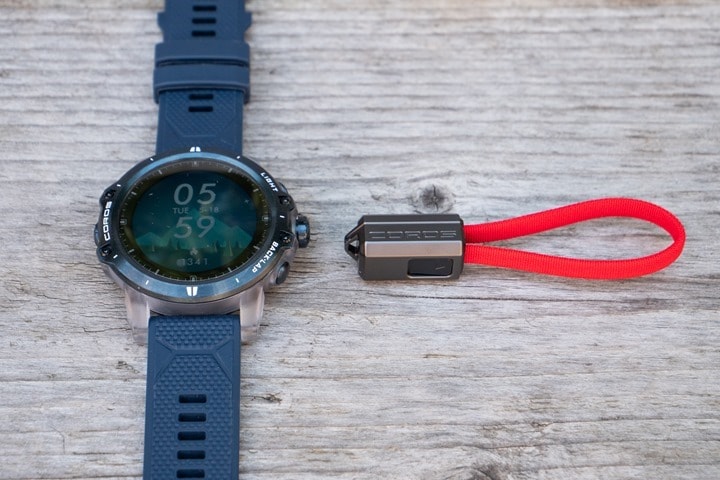 I don’t really have any further wrap-up text, but the way the site works, it’s handy if I have a bulleted section at the end. Thus, I’m compelled to write some text here. But realistically, you’re probably still back thinking about that Wrecking Ball.

In the meantime, I’m off to order one of these for my permanent collection.