Here’s What Happens When You Order a $35 Power Meter 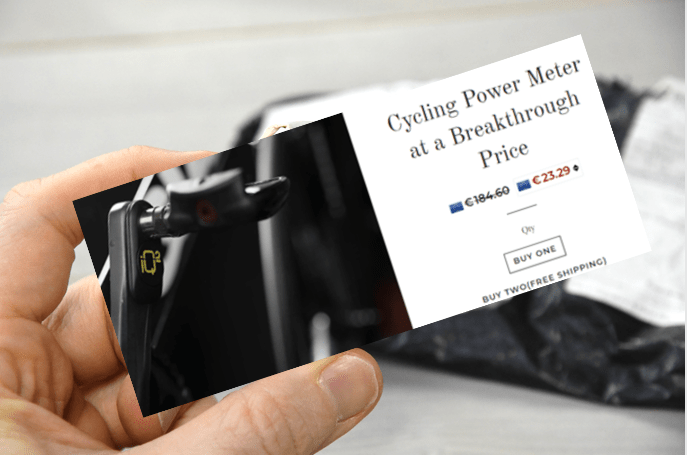 Remember IQ2? The Kickstarter-based startup that’s been trying to produce a budget power meter for about 33 months now? You might recall late spring 2019 they announced a change in direction from a small crank-arm attached pod to a full on pedal-based power meter. Then this past spring they announced a final production unit, and even sent me one to test. I tested it, and turns out – it was actually accurate in my initial testing. Also turns out, they haven’t yet shipped any meaningful quantity of units to actual real-world users. Hence, no review from me. But that’s all besides the point.

We’re not here for that. We’re here to see what happens when you order a $35 power meter.

Since two Octobers ago (the 2019 variant, pre-pandemic), Instagram and Facebook have been flooded with advertisements to pick up the IQ2 power meter from between $25 and $35. I was to the point of getting daily questions about this. Then these advertisements largely disappeared in early 2020. However, they’re back now – especially over the past few weeks. 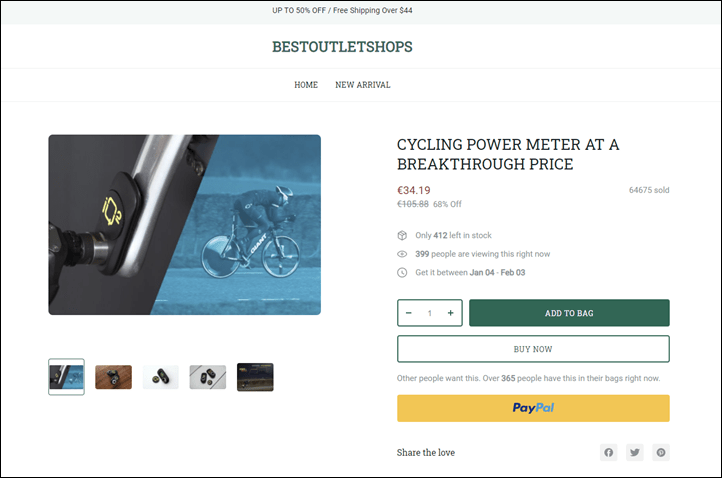 The sites essentially replicate the IQ2 Kickstarter pages, with the original pod-design (remember, they’ve since moved onto a pedal-based design). It says some 64,675 units have been sold – and the number of people looking at the page actually changes in real-time between a few values on a loop. Oddly, there’s always 412 units left in stock – despite 365 people currently having it in their bags [carts] at this point. From an e-commerce standpoint, this would arguably be one of the worst conversion rates out there.

Note: I’m not going to link to any of these sites, since I don’t want to give them the traffic (for what will probably be obvious reasons.)

But ya know what? I’m gonna be one of those people. One might even say I’m gonna bag this deal!

Thus a year ago I decided to – in the name of science – actually buy one of these. Partially because I was curious if IQ2 was actually dumping failed V1 inventory into China (very plausible in my mind), and partially cause I was curious what the heck I’d really get.

So, I clicked my way from one of the numerous Instagram ads I’d been served to see what I could buy. In this case, it’s this one from the below-named company. It noted I’d “reach my optimal performance with the power meter by IQ2”. Boom – I’m ready to do this! 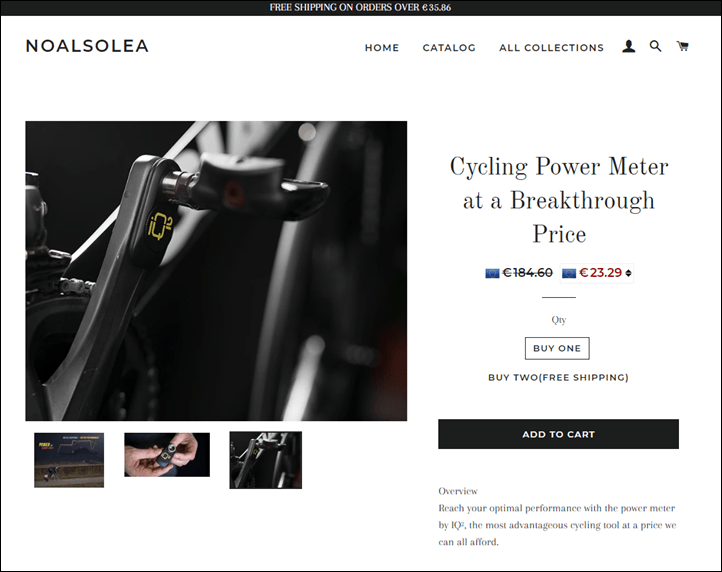 And the specifications – they were clearly super legit. Mostly cause…they were a carbon copy from the original IQ2 Kickstarter page. 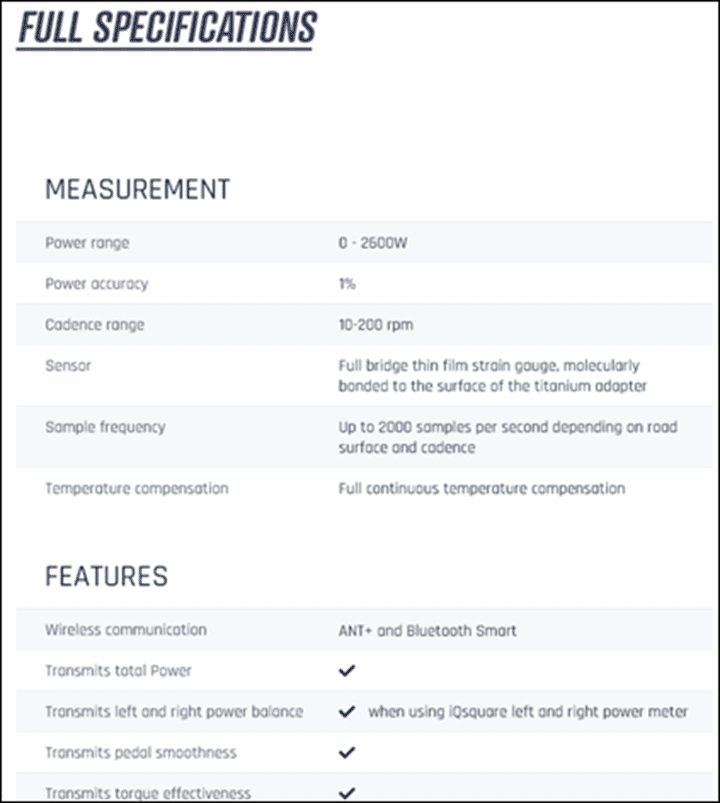 Needing no further proof, I immediately pressed to add to my cart and paid via PayPal, in order to minimize any credit card type implications there.

A few moments after paying I received a confirmation e-mail with a very official looking e-mail address: 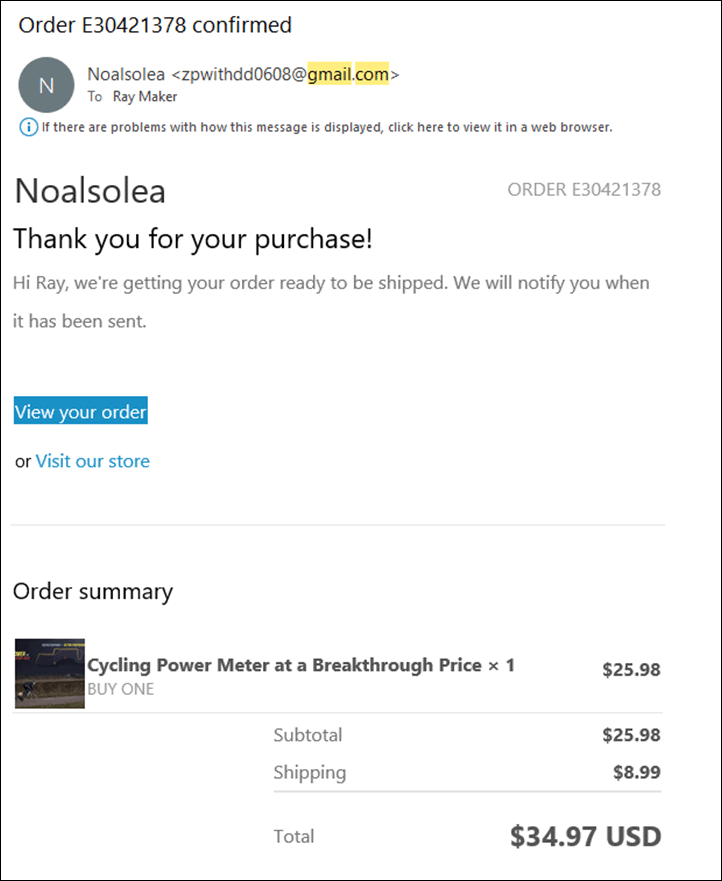 Fast forward about a month after that, and on Nov 26th, 2019 I received a shipping confirmation via PayPal: 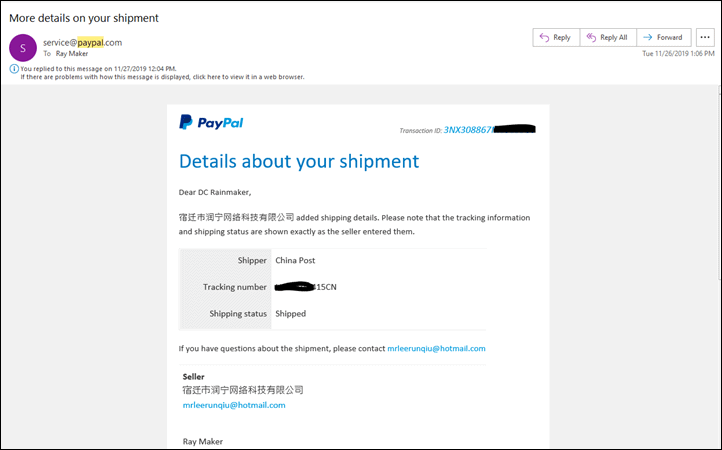 One might say I was doubly ecstatic. Or Estastic².

But wait…that very next morning, hot from China, I received the shipment. Apparently, for once in my life, the e-mail system was slower than the mail system. Thus, I was now in possession of my power meter! 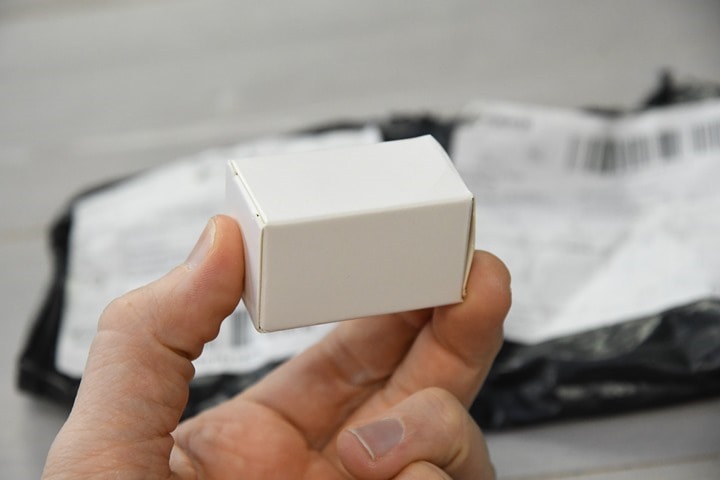 Now at first glance, this would appear to be a relatively small power meter. Also, relatively lightweight. A bit unexpected since I’d actually handled the original IQ2 power meter “prototypes” a long time ago – and certainly the entire kit would not have fit in a box roughly the size of an egg. But hey, maybe it magically morphed out of the box like one of those Chia Pets or something and becomes a power meter. Yes, you can still buy Chia Pets – in fact, even a Baby Yoda one. It costs less than this power meter.

In any case, not wanting to be a Debbie Downer, I got to opening it up. After all, I’ve been surprised before. Inside I found a plastic baggie, a 3M sticker, and a piece of paper with ‘instructions’. 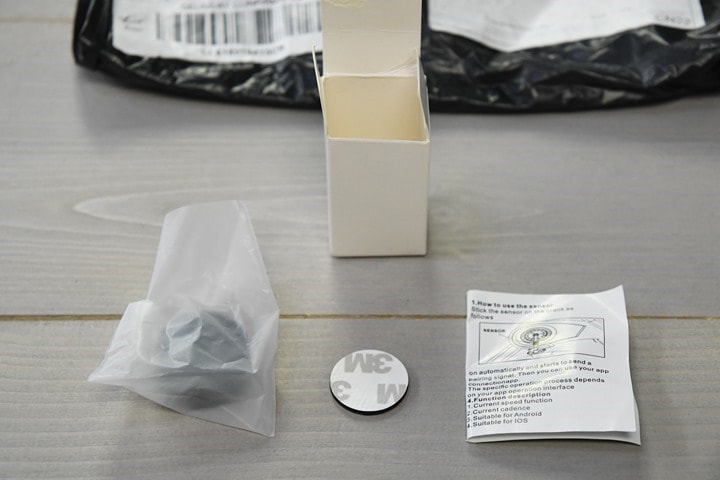 Inside that plastic baggie I’d find my power meter: 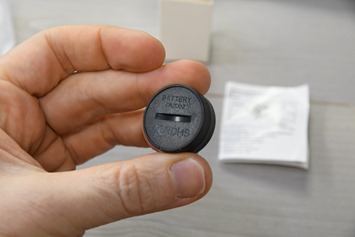 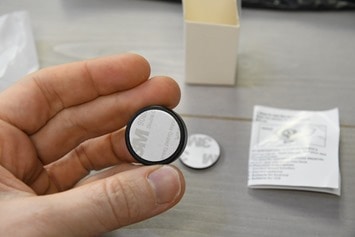 I know…I know…this isn’t looking super great. But ya know what – power meters like those from Stages, 4iiii, and others are technically the same size and powered by the same coin cell batteries. Sure, they use fancy industrial adhesives and sand down the crank arm first using laser and such. But if I’ve learned anything as a Certified Geek – it’s that a bit of 3M tape solves everything.

With that, I got the manual cracked open. It says included is the “sensor” and the battery. Plus some troubleshooting instructions. Notably, if I have issues, I need to “let the smoothly face is facing up”. I’m not sure what a “smoothly face” is. Is that like when you get a smoothie on your face? Or when someone gets a smooth face after a facial? I need some clarity here. 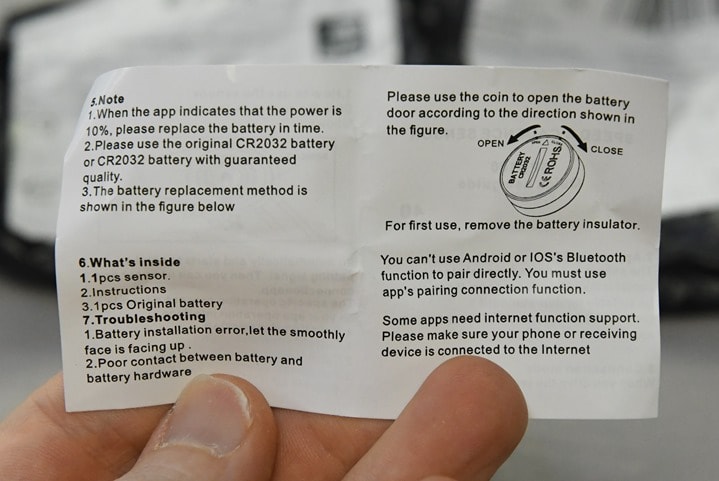 Flip the instructions over and I sense a disturbance in the force. Namely, the fact that it says this is ‘Speed & Cadence Sensor”. But this is SPD100, and undoubtedly with this being the 100th integration, it probably has a power meter built in that we just don’t know about. 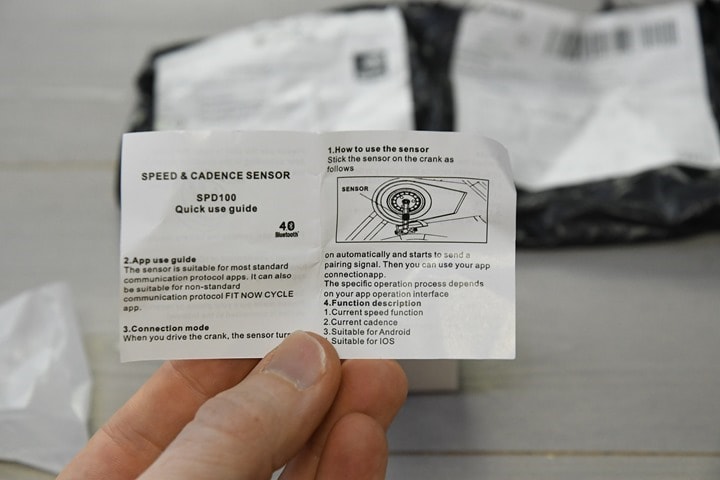 It does note that the “sensor is suitable for most standard communication protocol apps”. And – it even has a Bluetooth icon on it. Thus, I cracked open the pairing menu on the Garmin Edge 530 and got to work searching for sensors. After all, it supports ANT+ & Bluetooth Smart standard protocols for power meters. Oh, and speed, cadence, and speed/cadence combo sensors – but surely we won’t need that for this power meter. Right? 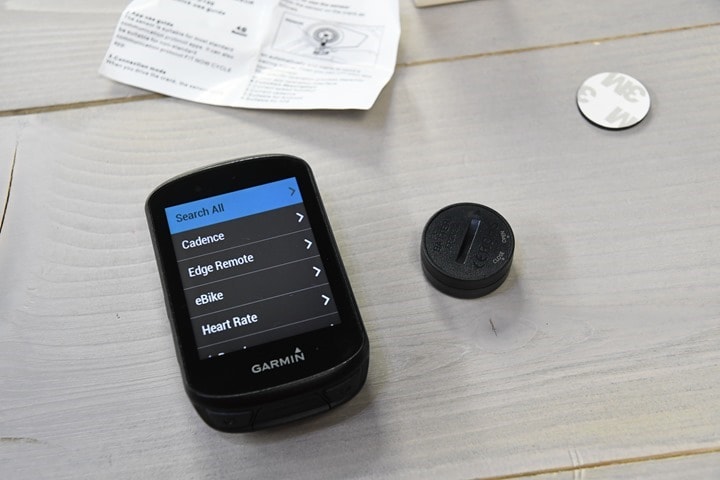 Will look at that! It found…umm…not a power meter. But hey, beggars can’t be choosers, and if it found a cadence AND sensor then gosh darn it the power meter must be hidden inside of that – protocols be damned. Fun fact: This actually broadcast on ANT+. No kidding. 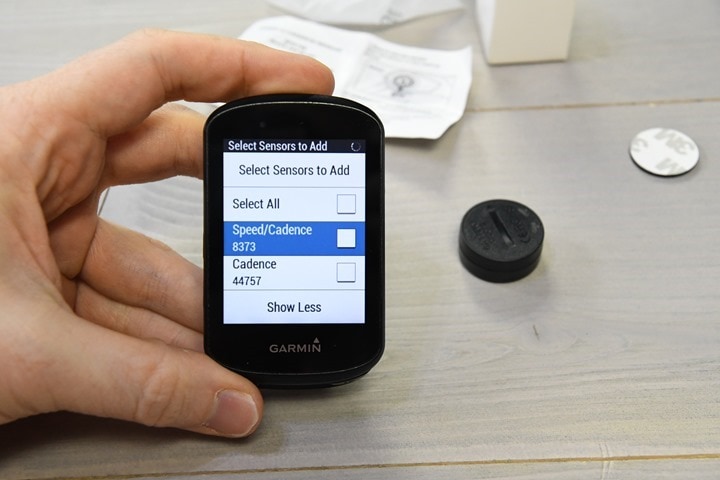 With that confirmed, I installed it on my bike. Now while this company did include tape – I decided to one-up their tape scheme and use some high-quality electrical tape just in case. Just to be sure the smoothly side stayed put. 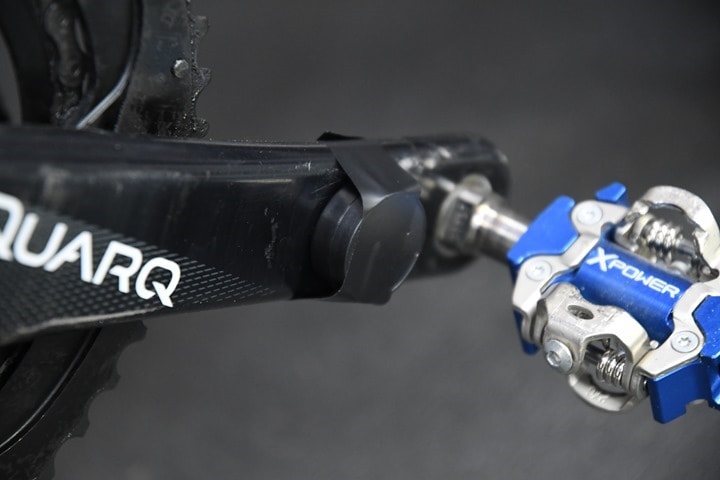 Just to be sure for accuracy comparison’s sake – I was ready with plenty of other power meters. It was mounted atop a Quarq DZero power meter, next to a SRM X SPD power meter, and all sitting atop a KICKR V5. Oh, and the other crank arm also had another dedicated cadence sensor too. Again – just to be super sure.

And then I got to pedaling. 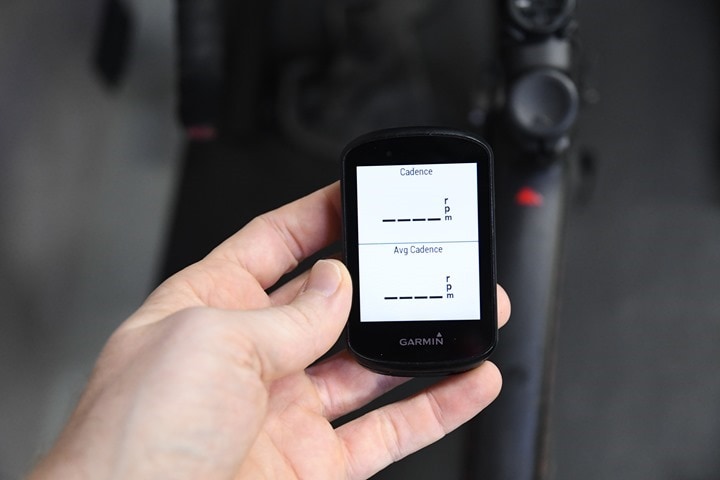 No power. No cadence. No speed. No…ummm…data.

So then I checked the sensor details: 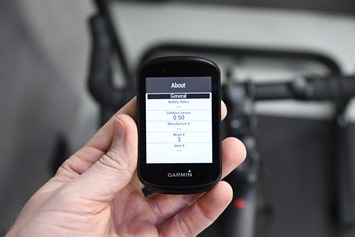 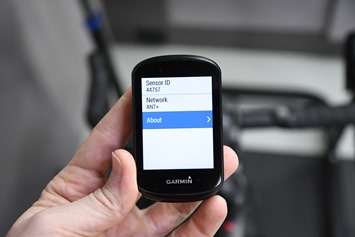 It’s almost as if they didn’t fully finish this part. It lacked a manufacturer ID, or battery status, or serial number. But it did say the software was halfway to version 1. Which means they did start somewhere. It’s unclear to me if being halfway finished with a product and shipping it, is different than being finished with a product and not shipping it. I suppose there’s a power meter company around here somewhere that might be able to clarify that for me.

Given my initial attempt to use standard protocols has failed, I figured I should try the app that they recommended when the “non-standard protocol” is required…again, per the manual.

Here’s that app in the app store. Aside from the name, which I managed to find, there’s little other information in English. And by ‘little’, I mean none. But, living in a foreign country for the last decade, having things not in English is my jam – so…let’s get to installing this. 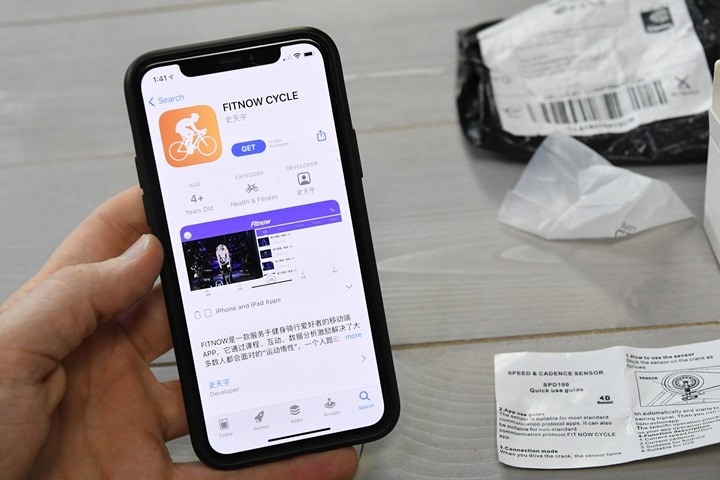 However, the four-year-old inside of me does feel like it’s notable that this particular app is copyrighted by ‘Pooboo’. Actually, correction: POOBOO – all uppercase. Just wanted to point that out. 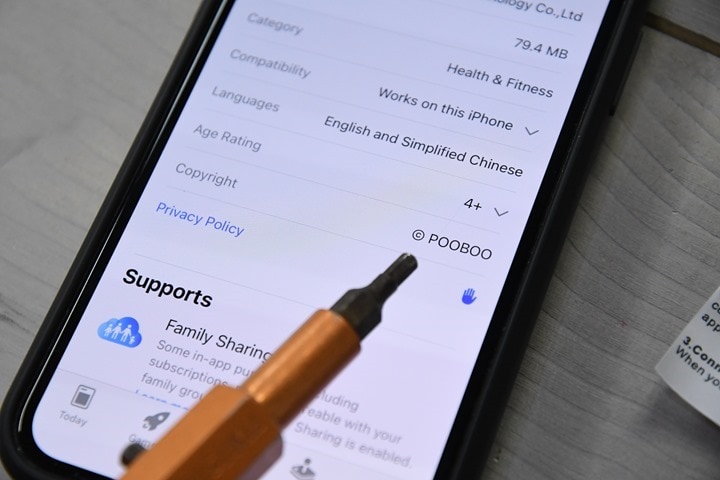 After getting the app installed I was greeted with this linguistical situation:

And thus…an issue. I can’t read any variant of Chinese writing. And I feel that after giving them $35 – I’ve probably inserted enough coins into this situation for the moment.

Now, not one to take this lying down – I immediately e-mailed the address linked to the PayPal transaction: 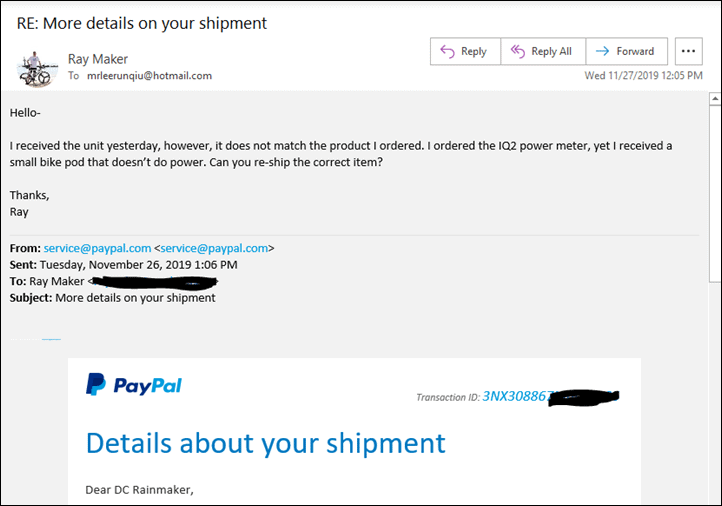 To which, I immediately never heard back.

Not that I expected to. But, I did wait a while just in case. In fact, I waited so long that I entirely forgot about it until the last few weeks when people started getting scammed again – which, as a quick primer on dates means I waited a bit over a year. Though, that’s slightly less than half the duration of people still waiting for the actual IQ2 pedals.

I’m not sure if me getting a fake sensor (aka a paperweight) is better than getting nothing – but hey – from a return on investment standpoint, my $35 saved many of you from clicking the buy button on these scams. Because, as I’ve discovered again in recent weeks – a lot of people appear to believe this is real. It’s not.

So no, it’s not a mythical budget power meter. Instead, it’s a way to burn $35 and receive the world’s worst paperweight. I’d recommend just going outside and getting a rock instead. At least it’ll actually keep your real IQ2 Kickstarter payment receipt from blowing away.

Found this post useful? Wanna spend far less than $35 and support the site here? You can become a DCR Supporter. It gets you actual exclusive behind the scenes DC Rainmaker content and videos, and doesn’t even claim to be a power meter. Trust me, Not a Power Meter™.