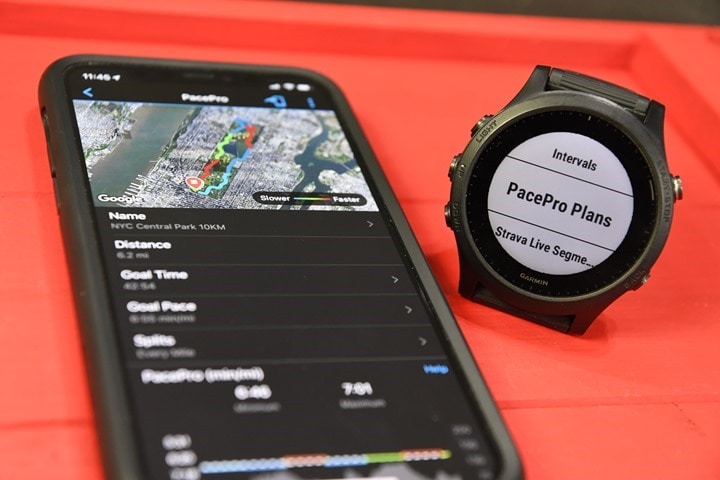 Here’s a Thursday quick heads up for ya – Garmin has begun the roll-out of PacePro to the Forerunner 945 and FR245/FR245M series watches. You might remember PacePro was introduced on the Fenix 6 about two months ago, and essentially gives mile by mile (or kilometer by kilometer, or even random chunk by random chunk) pacing guidance for races by looking at the terrain and your pacing goals (including time and distance, but also details such as negative split or positive split). It’s like the old-school pace bands that you see at marathons with your splits for it but with way more smarts in it.

It’s super cool tech, but is also something that’s actually more than meets the eye under the covers. Specifically – Garmin designed it to be extensible. Meaning that as they get past this particular firmware update to these devices, they’ll be looking at how to make tweaks to it. Be it covering more use cases, or bringing in partners to leverage it. For example, the way Garmin Connect plops files on the watches was designed to be open to allow 3rd parties to create files as well.

Right now for example it’s specifically for running, but it’d be easy to see how this could be extended to cycling (primarily time trials/triathlons). That would make it super appealing for companies like Best Bike Split to leverage it for better guidance than the somewhat cumbersome methods that have to put up with today for real-time pacing guidance.

Finally, for the FR945 (but not FR245), you’ll now be able to add either 5 or 6 data metrics/fields per page instead of the previous 4. Again, another change that was previously introduced on the Fenix 6. 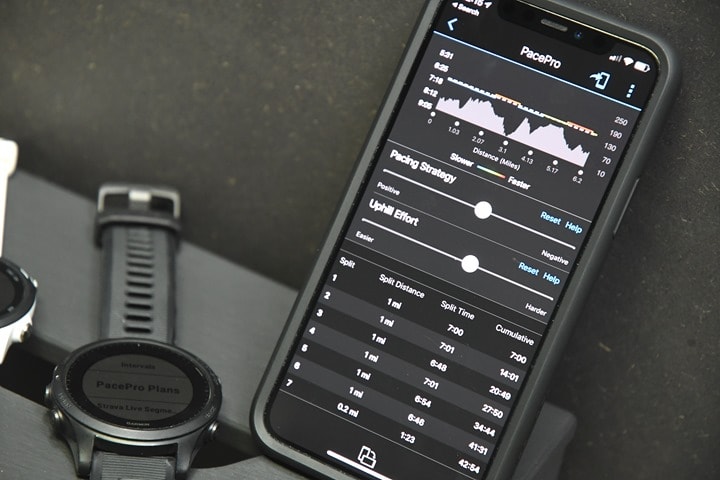 Now if you’re unfamiliar with PacePro, I’m going to copy/paste my section from the Fenix 6 Review on it here below (with some minor tweaks). I’d happily go out and re-shoot this entire thing on the FR945, but I live in a place whereby an errant bread crumb on the top of a desk has more altitude than my surrounding terrain. Certainly you can still use PacePro in flat-terrain situations to do negative/positive splits. But the real magic is the ability to handle more volatile terrain such as climbs or descents and pacing those. The next time I travel somewhere I’ll get some more pics.

Now starting with the basics of PacePro– think of it first like one of those pace bands that any marathoner is undoubtedly familiar with, this makes it all electronic. But even more than that, it automatically calculates each split (miles or kilometers) based on the elevation profile of the course you’re doing. In turn, you then get individual split targets for each mile raced.

But wait, we’re not done yet. Atop all that, you’ve got two specific levers to tweak: Intensity of hills (how hard you run them), and then whether you positive or negative split the race/course – and to what extent. Don’t worry, I’ll demo all this.

So to start, this feature is available on both the Pro and non-Pro Fenix 6 models, MARQ, as well as the Garmin FR945 and FR245/245 Music. However, if using it on the non-Pro Fenix 6 & FR245 models, you’ll need to have the course already created (so it has access to the elevation data). Whereas on the Fenix 6 Pro/MARQ/FRR945 models you can actually create a course on the fly on a watch (since it has the elevation data from the maps on those watches), and then execute a PacePro strategy upon it from the watch. I suspect though that 99.99% of you, no matter which version you have, will be creating courses online and sending them to your device. Note that when doing it from the watch (versus Garmin Connect Mobile), you can’t adjust the various sliders that you see down below. As such, I’d really just recommend doing it from the app and sending it to your watch to execute.

First, you start off in the area to choose/create a course, and you’ll see the ability to choose PacePro. From there you’re given the option to load a course or not:

Technically speaking you don’t even need to load a course. You can simply use an assumed flat course profile and then do positive/negative splits based on a given time goal or pace goal. Which gets us to the next bit – choosing that goal. You can tweak this later easily if you want, but you need to choose either a time or pace goal. In my case I set up a loop around NYC’s Central Park and went with a sub-7/mile pace goal. Knowing I’d be coming off a transatlantic flight and running this 90 minutes later, I kept things civilized:

Next, you’ll be brought to this screen that shows the course profile with color-coding on it. You can expand this and zoom in however you’d like:

But the real magic happens down below. That’s where you can dork with two levers. The first one adjusts whether you want to positive or negative split the course (meaning, get faster over the course, or fade over the course). And the second one adjusts how hard you run the hills.  As you adjust those sliders, you’ll see that both the split targets down below change, as well as the split targets over the elevation up above:

It’s frankly kinda fun to play with this. You can do it all day long. Once you’re done, you’ll send this to your watch and it’ll sync via Bluetooth Smart.

Also of note – is that you can create the ‘splits’ based not just on per-mile or per-kilometer, but per elevation changes. So you can divide them up between downhill sections vs uphill sections vs flats, etc… Which frankly, makes a lot of sense.

Next, back on your watch you’ll go to the running activity and load the PacePro strategy up. These actually are files similar to course/workout files that you’ll find on your watch (for those geeks in the house). On the watch it’ll show you some of the stats for that PacePro session: 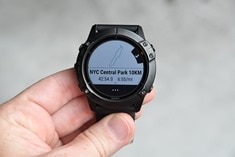 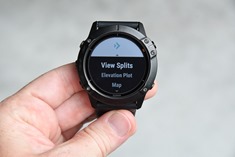 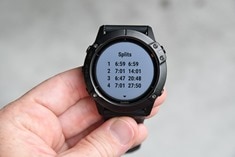 And then, off you go (once you press start). The watch will then show your target pace (7:00) on the top line, followed by your current pace for that split on the second line (6:35). You can see here I’m overachieving (hey, I’m still getting used to trusting a watch on pacing like this): 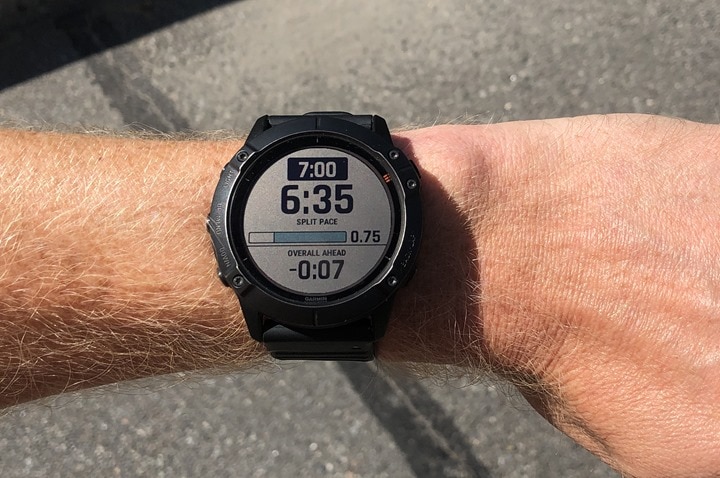 Then down below you’ve got distance remaining (0.75) in that lap (either 1 kilometer or 1 mile depending on how you’ve set it up), and then below that you’ve got whether or not you’re ahead or behind for the entire race, and by how much (-0:07).

What’s notable here is is that it locks to your GPS location on the predefined course (think of it like a train track, or roller coaster ride), rather than your watch distance the GPS has measured. This has its pros and cons.

On the plus side, this means that if your GPS accuracy goes to crap (such as with a tunnel, or just life in general), then it doesn’t impact PacePro. That’s really really cool, and is considerably different than something like Virtual Partner or any other pacing functionality. On the downside though, if there’s a difference between the route/course you created in Garmin Connect (or wherever) and the course that you’re running – then you’re up crap-creek. That could happen if either there’s a change on race day due to some road scenario, or if the route you created on GC has unnoticed anomalies in it.

In fact, that’s exactly what happened to me with my NYC Central Park course. I thought I had created a loop around the main road, but upon closer inspection at numerous points along the route the Garmin Connect course creator took short detours. Often only 50-150 meters each, but there was a pile of them, usually just briefly to nearby sidewalks and back. But they added up – and they’re virtually impossible to see unless you zoom way in.

Now back in August when I did this test in NYC, I ran into issues with the underlying map. Garmin did some digging into it (ok, a lot of digging) and it was mostly as I suspected: My initial route had errors in it. Though, I argued that if I quickly create a loop around Central Park (likely one of the most popular running loops in the world), it should be able to do that without screwing it up. And they agreed. After which, they did some stuff.

Unfortunately, it still seems to struggle in the route creation department in NYC Central Park (specifically, it often jumps back and forth between the different running/walking paths – causing weird hops). I get it, the heatmap data for Central Park has to be bonkers to contend with. And indeed, if I try less crazy places like here in Amsterdam (which actually has more ancillary bike/ped paths alongside every road) it handles it better, likely because the underlying popularity data is a bit cleaner. Simple lesson though: Just double (or triple) check your exact route in Garmin Connect Mobile before you move onto the PacePro bits.

In any event, that issue aside, the entire functionality of it worked awesomely on the watch itself. It was surprisingly motivating to just focus on a single lap, but more importantly – getting different splits each time. It took my mind off of the larger prize, and had my brain focus on one thing at a time. Well done.

Getting your device updated: 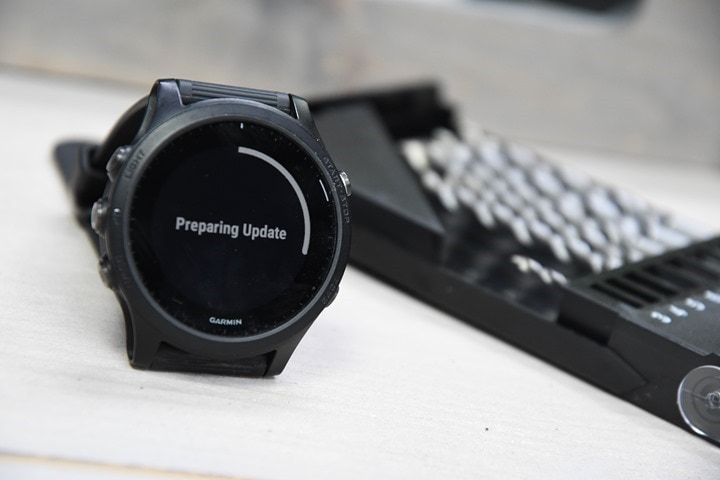 Now, the roll-out is being done in phased fashion (like most of Garmin’s recent firmware rollouts), which is mostly done to lessen the impact of an issue in the event something is found that wasn’t caught in testing. These firmware updates contain more than just the PacePro features, it actually has other new features and a slate of bug fixes as well as sensor changes. As we’ve seen recently with iOS13 (for both Apple & Garmin), Bluetooth changes, in particular, can be incredibly tough to predict with large scale audiences. Here’s the list for the FR945: 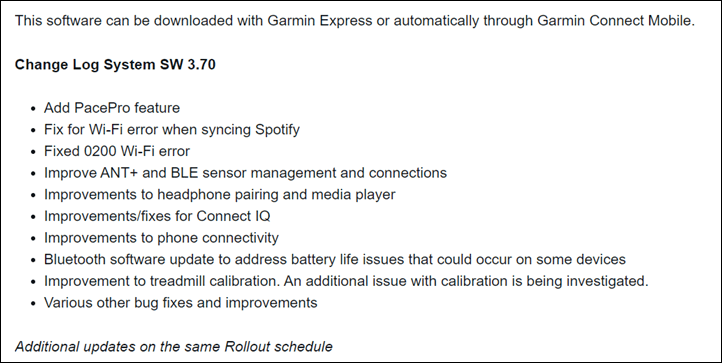 Roughly 20% of users would have received the update (or the ability to get the update) last night, and then Garmin says if everything checks out over the course of the day, they’ll continue with the phased roll-out over the next 4-5 days, so that all users will have the update by early next week.

There’s a pile of ways you can get the update:

Of course, all of these will still be dependent on you winning the firmware update lottery. I’d love to see Garmin offer the ability to simply manually download the firmware update file (like they do for public beta users) in the event you’re eager to get started. Perhaps simply providing a link from the Garmin Forums post that a Garmin employee publishes for each new firmware update (it’s also where they list the phased status). To me that strikes a nice balance, and probably gets critical feedback back to Garmin faster than waiting for the average user to run into unexpected issues.

In any case – go forth and update…and then race. Though, I think we’ve passed many of the major US/European fall marathons at this point. Actually, there’s still my personal favorite (and marathon PR, throw-back post here) – the Philly Marathon. And Seattle too! Both are coming up in a couple of weeks. Good luck!