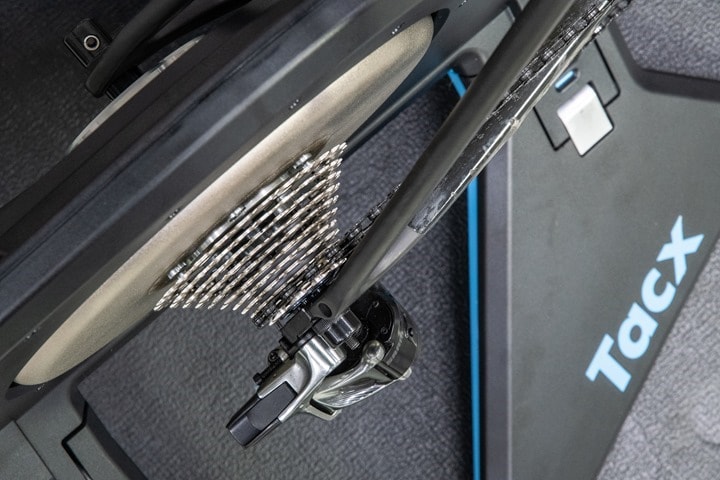 Update: My complete Tacx NEO 2T In-Depth Review is now available here! Hit it up for all the details after months of testing!

At Eurobike this year Tacx has announced their latest update to the Tacx Neo Series, with the new 2T trainer. For those not familiar with the Tacx lineup, the Neo series is their top of the line trainer. It’s virtually silent, has an electromagnetic flywheel that allows it to replicate road surfaces (like cobblestones), and is arguably the most powerful trainer out there.

The new NEO 2T essentially takes the Tacx NEO 2 trainer that was announced last fall and gives it more power. It does this through a combination of stronger magnets and tweaks to the magnet topology. The reasons you care about this is that it eliminates the ‘slip’ feeling that the Neo exhibited in the past when hard-sprinting at extremely low speeds. It also means faster ERG mode responsiveness. Way, way, way faster. And now native thru-axle support.

Meanwhile, on the software side, they’re close to releasing a firmware update (which isn’t ready yet) that will bring Cycling Dynamics to not just the NEO 2T, but also the existing NEO 2 trainer. That helps to close the loop a bit on Tacx’s promise last fall to ‘bring undefined new features’ to the Tacx Neo 2 down the road.

Now, I’ve been testing this trainer for a number of weeks. But part of the reason you don’t see a full in-depth review yet is that the firmware simply isn’t final yet (pre-production) – though the hardware is final. I’ll get more into the specifics down later in the post, but ultimately, I’m calling this a ‘hands-on’ look at things, with a full in-depth review to follow once some issues are worked out. In fact, even in the last 5 hours since the official announcement there’s been some tweaks to the firmware.

But again – we’re getting ahead of ourselves. Let’s talk trainer geekery first!

The vast majority of the changes to the Tacx NEO 2T are internal, not external. In fact, the only external change you’ll notice is a new ‘racing stripe’ inset on the back panel of the folding NEO wing. Here you can see it next to the Tacx NEO 1 and Tacx NEO 2: 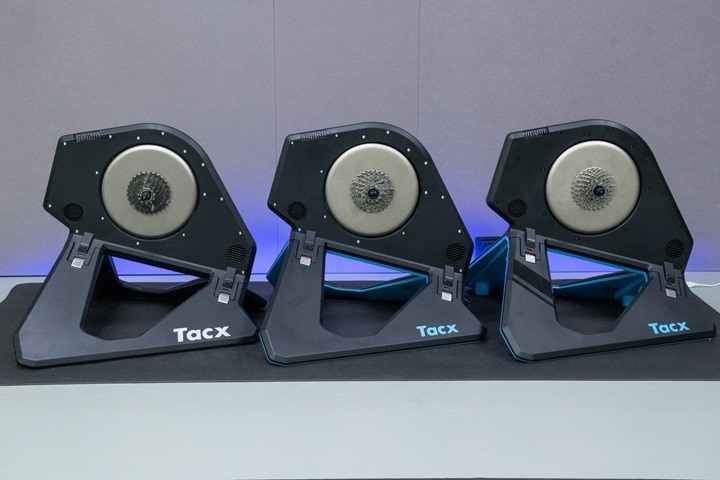 But like they teach you in grade school, it’s what’s inside that matters most. And in this case what matters most is magnets. The company has made a pile of changes internally around the magnets. It’s magnet mania. Here’s what’s different inside at a geeky level:

What does that all mean in real-life? Well, we’ll get to that in the First Rides section. But first, let’s look at a graph, since again, geeky. This shows you the braking power of the Tacx NEO 2T versus the NEO2, against your speed. This shows why you could cause ‘slip’ at low speeds on the NEO2 at lower speeds, as it’s more than tripled in those lower scenarios. 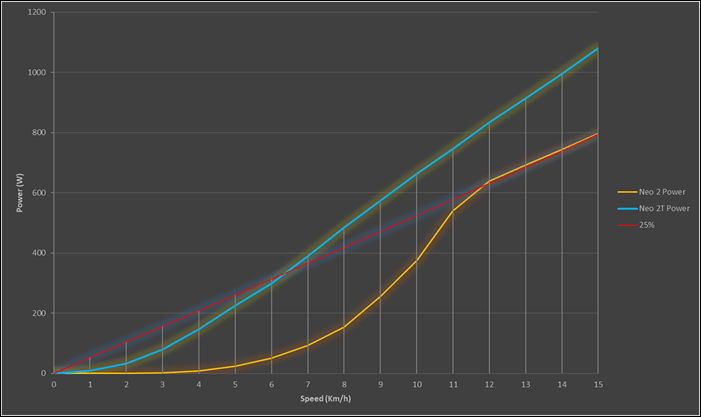 But beyond all this magnet mania, there’s a few practical considerations. First, it’s quieter. At least in theory, frankly – I can’t tell the difference in my studio. Maybe if I move the whole setup to the podcast recording room with the soundproofing now installed on the walls I’ll be able to hear it.

The other change coming, but not yet in any firmware, is Cycling Dynamics. That’ll give us access to the typical Cycling Dynamics suite of data, though I haven’t tried it yet to see if all the metrics are carried through, or how it stacks up against Garmin Vector 3. After all, those two should match in my mind. So I’m keen to see how that looks. And for that matter, how it might stack up against Favero Assioma and their recent Cycling Dynamics update as well.

Fun testing times ahead for sure! 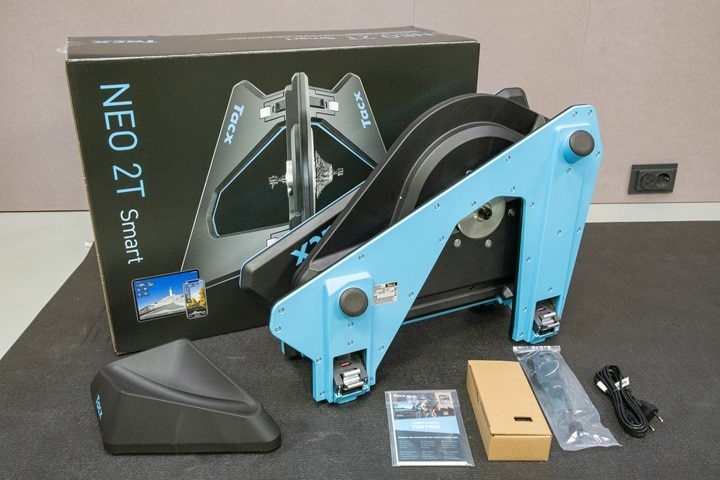 When I say ‘first rides’, I mean like, first, second, third, fourth, ninth, tenth, and so on. But before we get there, let’s start with some quick NEO basics – it’s the same here regardless of which model you’re on. The NEO 2T folds out just like the rest of them. Aside from the aforementioned racing strip, you’d never notice the difference between them. 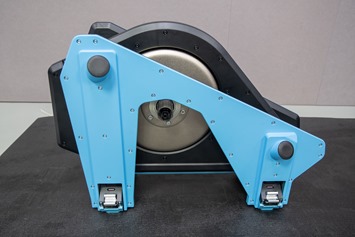 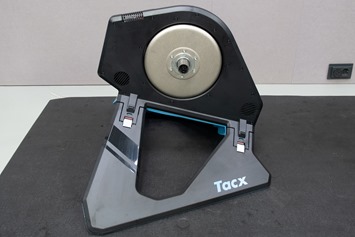 Once unfolded you can either plug it in or not. Plugging it in ensures downhill drive (meaning, it’ll spin the flywheel when you go down a hill in apps like Zwift), and also makes it easier to pair with apps since you don’t have to pedal for it to wake up. 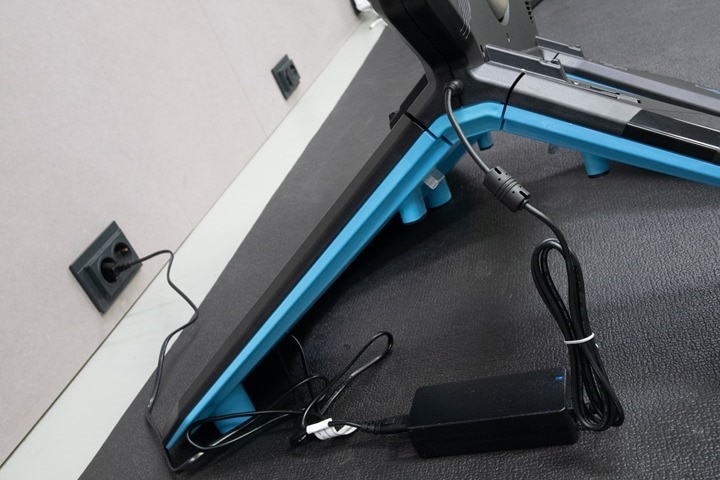 You’ll also need to install a cassette on it. Despite being the most expensive consumer smart trainer on the market, it doesn’t come with one: 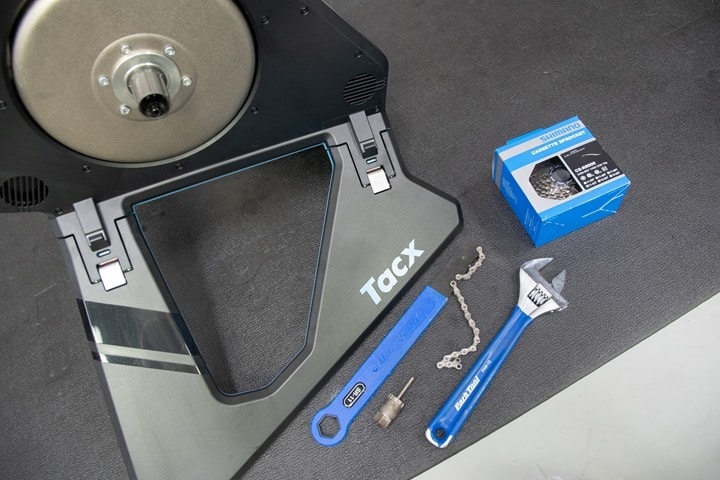 Once that’s all done, toss your bike on it, and you’re good to go. The unit supports both quick-release and thru-axle bikes (natively now!), and includes adapters in-box for both as well: 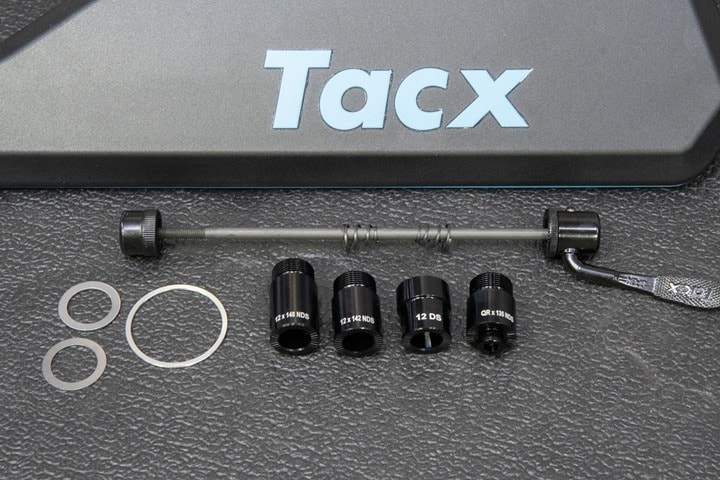 Next, you’ll pair it up to your favorite app of choice. In my case, I used both TrainerRoad & Zwift as my main testing platforms. Both will see it enumerate via either ANT+ or Bluetooth Smart, depending on which type of device you’re using. 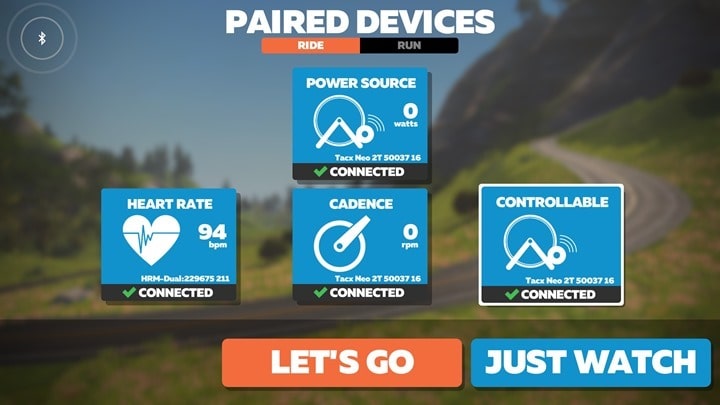 With that, you’re ready to pedal and get cookin: 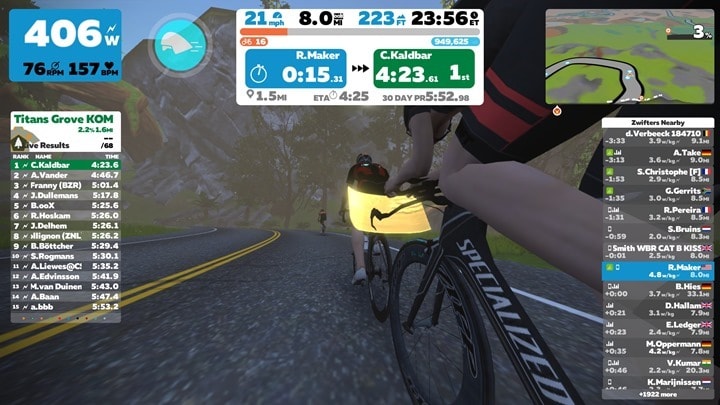 The first thing past Tacx NEO users will notice is that the slip is gone. If you aren’t familiar with the slip, essentially it meant that if you were going a very slow speed (such as when climbing a really steep hill), and then threw down a sprint effort, it’d feel like the trainer ‘slipped’ for a second. It didn’t last very long, again, about a second or so. And for most people, you might never encounter it. But it was one of those unique Tacx Neo things. Either way, it’s gone now.

That’s largely due to the pile of extra magnets in there, and that also manifests itself in other ways – most notably ERG mode. For example, in TrainerRoad, the shifts in wattage on my 30×30 workouts were astoundingly quick. My usual test workout is ~150w up to ~400w, in 30-second sets back and forth. I do this on all trainer tests. It’s a great way to test responsiveness.

(Note: It was overshooting the ERG set point in Sunday’s firmware, that’s supposed to be fixed in today’s firmware.)

And indeed, the Tacx NEO 2T is incredibly responsive. In fact, one might make the argument that it’s actually too responsive, potentially too fast. Most trainers will take between 2-4 seconds to complete that 150w to 400w transaction, or a normal time for your body to adjust. But the NEO 2T delivers that in about 1-1.5 seconds.  Now, I say ‘might’ make the argument, because the firmware isn’t quite final yet and there’s still some tweaks to come and test there. So I’ll hold my final judgment.

Speaking of which, let’s talk about why this isn’t a full review. After all, that was definitely the plan: Hardware was final, and software was looking final too (save the Cycling Dynamics bit, which might have been a later update anyway). Unfortunately, I just couldn’t get power values to match with trusted power meters in my arsenal. I tried a Quarq DZero, Garmin Vector 3, Favero Assioma, and 4iiii Precision Pro. And while the values on the latest firmware were close – they weren’t good enough.

I was consistently getting the Tacx NEO 2T underreporting power by about 4-6% – which is way too much, even despite the drive chain loses. I went through a few more new 2T’s, and in turn they made some tweaks to firmware and calibration machines, and the process repeated itself a few times. But ultimately, even with new tests this morning – I couldn’t get accuracy where I want it.

And more importantly – I just wasn’t on final consumer firmware anymore, which is generally my bar for an in-depth review.

Now, it’s very likely they’re gonna sort this out pretty quick. Even just in the last 5 hours since the NEO 2T’s announcement they think they may have cracked the nut on what’s going on. They had engineers spending all day, and frankly, all this past weekend on it. I even met them Saturday afternoon at the factory on my way to Eurobike so they could diagnose not just the trainer, but my bike too, to try and figure it out and if it was something unique to me.

At this point (10PM our time), they think they know what might be going on, and are working on a firmware update to address it. If they can do that, and if I can get some more rides in with various software and it checks out, then I’ll happily release my in-depth review accordingly. It doesn’t sound like they’re shipping products until they sort this out. Which again, could be tomorrow.

I don’t want this to sound negative by the way – I think it’s hugely positive that a company is willing to listen and iterate to the feedback, working quickly to sort out what’s wrong. The best companies do that, and they don’t just pretend it doesn’t exist. 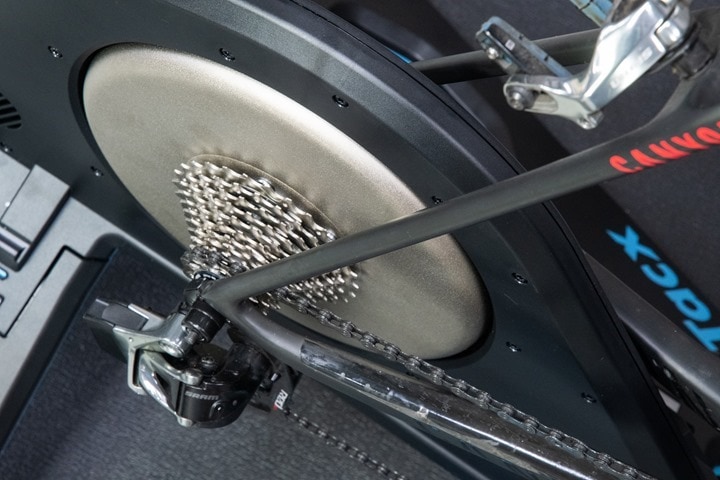 Assuming Tacx can work out the minor firmware issues – I suspect the NEO 2T will easily firmly implant itself in the usual Neo series location at the top of the trainer pyramid. The stronger magnets have resolved the virtual slip aspects, and atop that, you’ve got Cycling Dynamics coming. This will be the first trainer to support the standard (remember it became a standard a while back). Right now it does though already show power balance between left and right legs, though again, I’ll withhold judgment on that until I get the final firmware.

As far as pricing and availability, it’s essentially the same as the NEO 2, so that’s €1,299/$1,399/£1,199, with availability being pretty close to immediate – they’ve already been building and stockpiling units over the last month. Again, pending the final firmware update piece – which can be done after the fact anyway.

I’m looking forward to getting that and putting it through its paces. As many readers know, most of the time when I’m not testing something I’m using the Tacx NEO 2 as my main trainer. So getting rid of the minor slip issue will be great. Hang tight for that review soon, oh, and thanks for reading!

You can now pre-order the Tacx NEO 2T from Clever Training, which helps support the site. Shipping should be very shortly, and if you use the CT/DCR VIP Program, you can get 10% back in points. Plus of course, free US shipping.