After countless non-stop tech weekends, it was finally a little bit more relaxing on the sports tech gadget testing front. Still, I was carrying out some less critical tests over the course of the weekend which I suspect some of you might find interesting. Also, there’s pancakes, bikes, and goats for everyone else.

With the Forerunner 945 and Forerunner 245 last week, I was curious if anything had changed on the Apple AirPods compatibility front. While I didn’t own AirPods previously, I’d long known (both from Garmin and readers alike) that connectivity was rough at best.  This was mostly because both companies were tweaking their tiny devices to be at the absolute edge of Bluetooth connectivity. They wanted to provide just enough power to work, but not an ounce more. Unfortunately, in the case of wearables (where both companies definitely aren’t working together), it’s a fine line between success and failure. And previously, this relationship was a failure.

Of course, I wasn’t much interested in the AirPods personally. I think they mostly look hideous with a side-dish of pretentious. Still, with Apple on AirPods V2, and Garmin now 4-5 music devices down the road since the original Garmin Forerunner 645, I decided to give it a whirl.

Turns out, buying said AirPods in Amsterdam was surprisingly difficult. Nobody had them in stock. Not either Apple Store, nor any of the electronics stores. So, I had to order them and wait. But, now I have them. 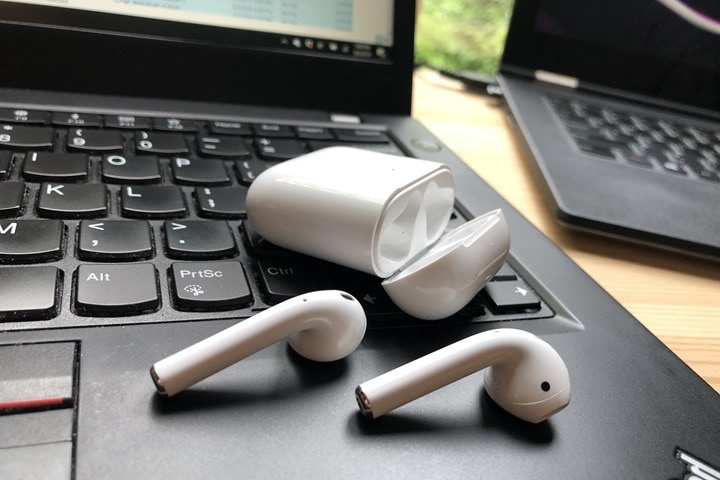 So just shortly after I got them on Friday morning, I tried to order the new PowerBeats Pro – which are basically a blend of the red PowerBeats I’ve long had around (and you’ve seen in my reviews) with the AirPods. They’ve made them totally wireless and added in the AirPods magic. They opened for ordering on Friday at 4PM Amsterdam time. They’re more athletic focused than regular PowerBeats. 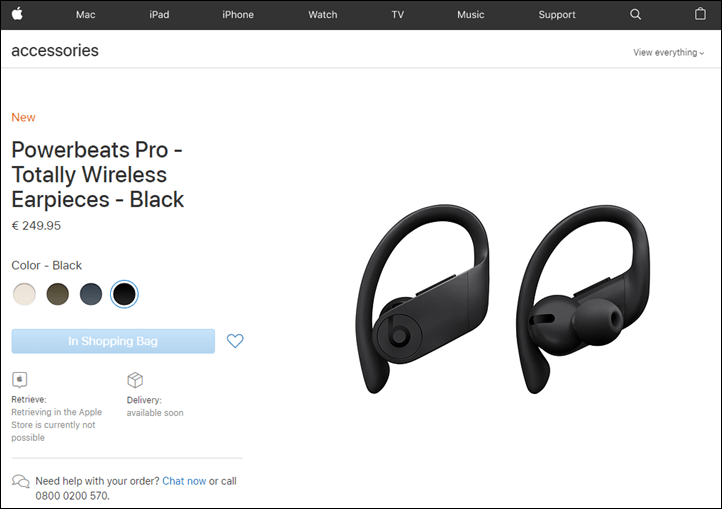 Except, as I discovered – they’re apparently not available to order in the Netherlands. Sad panda. So…no testing on that front for you. Maybe at some point down the road they’ll be available here, or I’ll pick them up on a trip somewhere else.

Usually once I finish a review I often go back and add in long-life battery tests to the review. Or at least, test it somewhere. The reason it’s tough to do pre-review is that I don’t usually have the time to set aside a unit for 1-3 days to test it out.

So this weekend I kerplunked the Edge 530, Edge 830, and Wahoo ROAM in the garden and then set up a dedicated laptop to broadcast ANT+ signals simulating a cycling power meter and a chest strap, to all the units. The power meter was configured to mirror that of a PowerTap hub, so it also sent speed and cadence information (which meant distance incremented too). 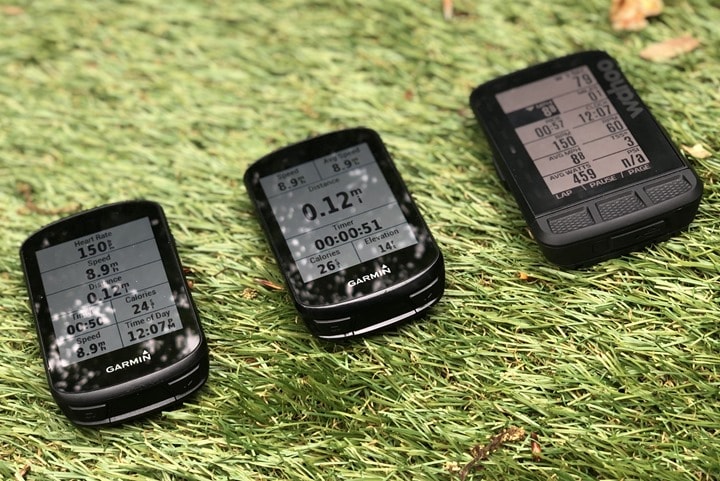 Then I kerplunked the units on the kids’ play area and let them be. The laptop was inside two meters away, broadcasting through the window. Works surprisingly well. 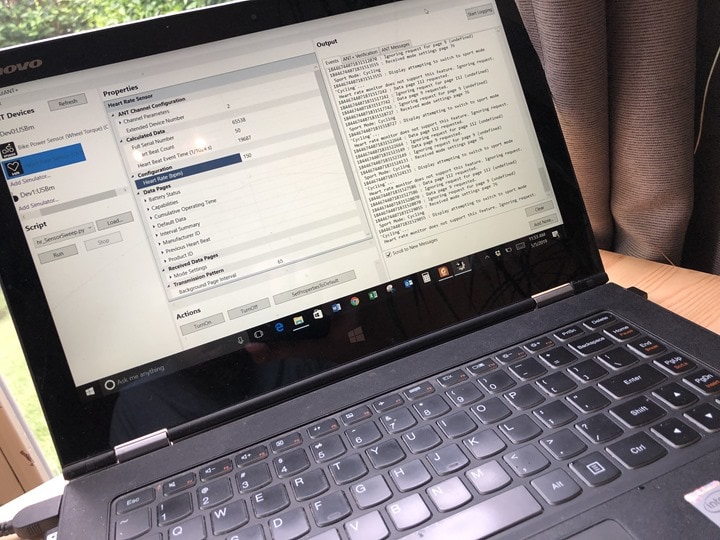 In the ‘old days’ these sorts of tests were easier to get realistic numbers. In those days there were no ambient light sensors or phone connectivity, let alone stuff like accelerometers monitoring for crashes/incidents or counting mountain bike jumps. Let alone smart algorithms that reduced GPS antenna power when there was no movement detected. For better or worse, those aren’t the days anymore.

In order to make these all equal, the settings were as follows:

Backlight: Manually turned off on all units (so they wouldn’t burn backlight battery overnight)
Phone: Manually disabled on all units (because I didn’t have a spare phone at the time paired to all of them)
Sensors: Power meter (SPD/CAD/PWR) + heart rate sensor, both ANT+ driven
Data screens: Fields showing the actual data being updated, to force the screens to update

Of course, if I wanted to burn more battery I’d have to:

A) Find a way to shake/rattle/roll the units, so the accelerometers wouldn’t rest (and the programming atop them)
B) Connect a phone to them the entire duration
C) Simulate button presses
D) Potentially simulate navigation/mapping/routes (or leaving it on the mapping screen)

But the goal isn’t to see how quickly you can burn the battery, the goal is to see if their claims hold water.  As of this writing (exactly 24hrs after I started the test, the results are as follows:

At this point, it’s clear that either phone connectivity or accelerometer aspects negatively impacts the Garmin units far more than I would have assumed (thus why it’s way overachieving on battery life). So I’ve got a solution for that. For the phones, I’m going to pair up some old phones to it for the next round of testing.

And then, I’m going to buy this turn-table. I can modify it with a few ‘bumps’ such that the units are forced to tumble a little bit. It makes sense in my head anyway. Says it’ll arrive later this week. So I’ll try again next weekend. Though, I’ll have to figure out creative ways to protect against rain. During the last 24 hours it’s both rained and hailed – so these units didn’t exactly get the easy pass.

3) A Run Around The Museum:

Sunday morning I went out for a 10KM or so run around Vondelpark. It was a nice quiet morning. Perhaps a tiny bit on the cold side for early May, but not too bad. Very few people in the park for a Sunday morning: 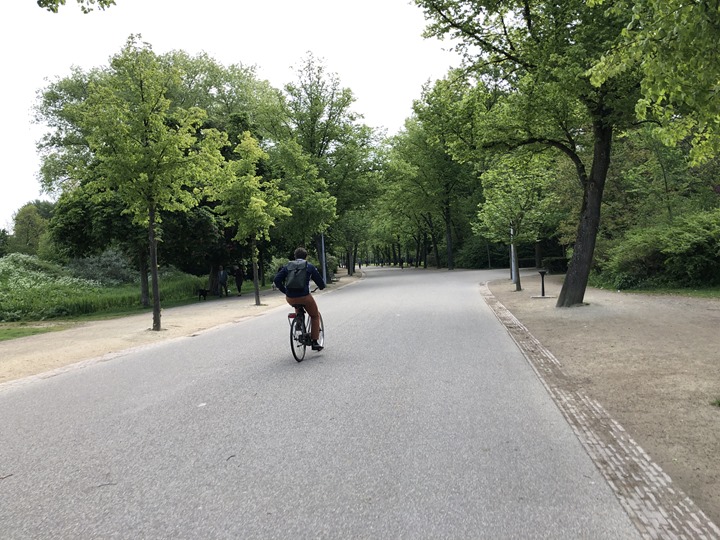 On this run I had the Vantage V Titan out for its maiden voyage, as well as the Garmin FR945 with the AirPods out for their first run too. 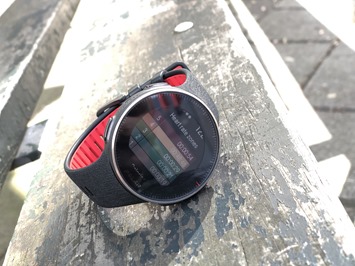 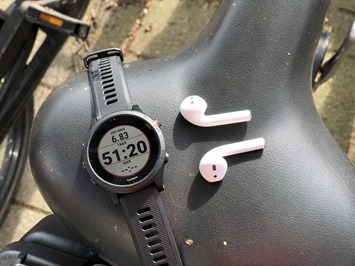 Once I got towards the end of Vondelpark I decided to do some loops around the Museumplein, though, also including Vondelpark. 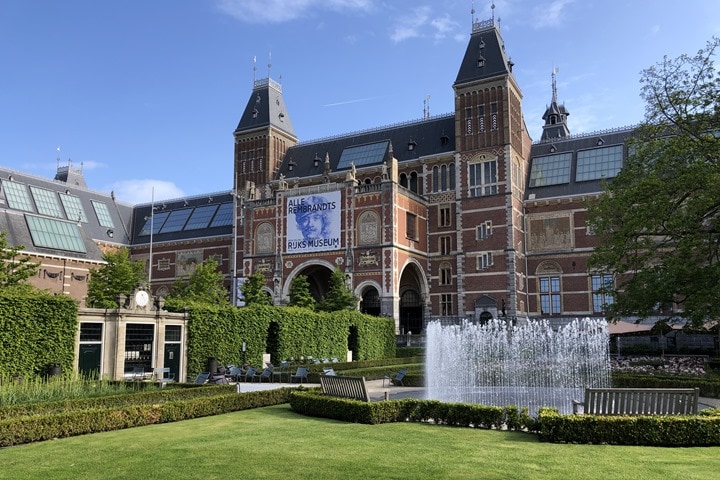 It was about 2KM per loop, and all of it just nice and easy cruisin’. One to the left of the museum, one to the right, and one directly under it. 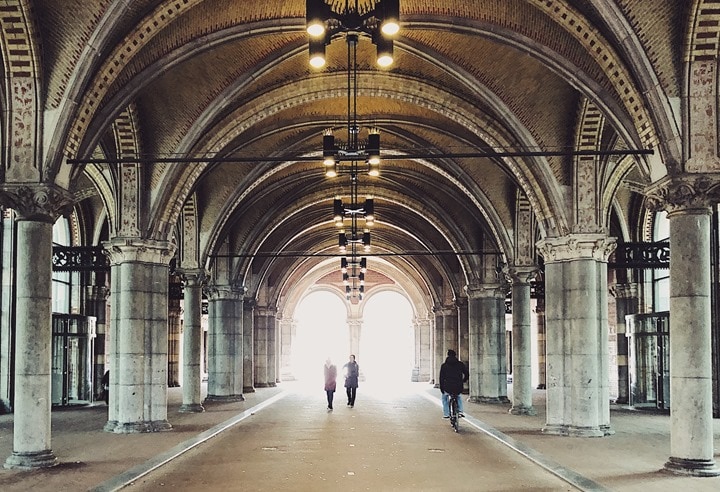 This made it fun for GPS testing as well, DCR Analyzer link here.

From an AirPods perspective, I was ready for total failure. At least, that’s what everyone had told me the last year when trying to use Garmin wearables + AirPods together. For this one, I loaded up Spotify on the FR945 with one of the canned workout playlists, and then paired them up to the AirPods.  Of course, I’d been testing this for a few days around home and the DCR Cave – and even leaving a watch on my desk I could make it all the way across the DCR Cave (three rooms away) – before I’d find some dropouts (and only partially). But otherwise, it never dropped out on me inside.

And outside? Just once – while I was standing there getting the watches all ready, there was a single blip. But never during the entire 6.86mi run did it drop the music.  Though, I did drop one of the AirPods. I went to brush some sweat off the side of my head and pulled it right out of my ear – and out it went onto the path. 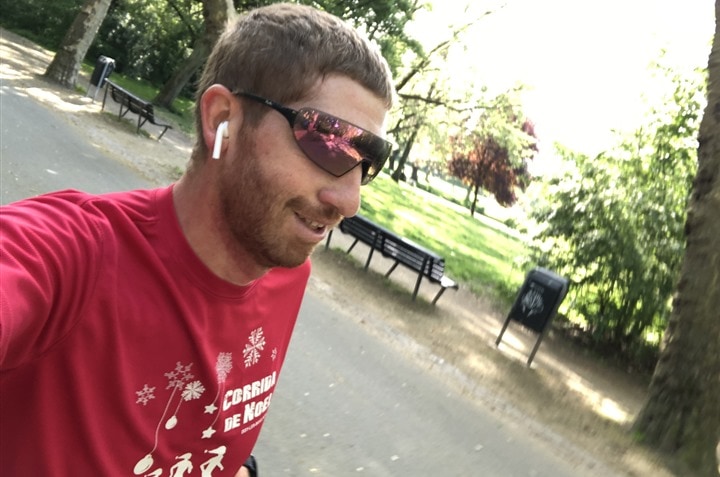 Thankfully I noticed it, though only just barely. I could easily see how you’d lose them while running and not noticing one has fallen out (since with a Garmin, it didn’t auto-pause music when you remove one from your ear, like it does on an iPhone), as the music in one keeps playing, and there was plenty of street/etc noise around.

Because my curiosity level is high, I’ve now pulled out all the other past Garmin music wearables, and will get them updated. I’m interested to see if the success is to due to AirPods V2 (versus V1), or due to something on the Forerunner 945 that makes it better than past units. I know for example that Garmin introduced improvements in the Fenix 5 Plus over the earlier Forerunner 645 Music around Bluetooth music specifically, based on what they learned over that 6 month lead period. Perhaps in the nearly 1-year since the Fenix 5 Plus, more has been learned.

After my run it was off with the kiddos and my parents who are in town to find pancakes in the woods. And deer. And peacocks. Though, ‘find’ is probably a strong word. Both I and the kiddos know exactly where the pancakes are (and the animals). It’s one of our favorite places out in the forest in the southern part of Amsterdam. 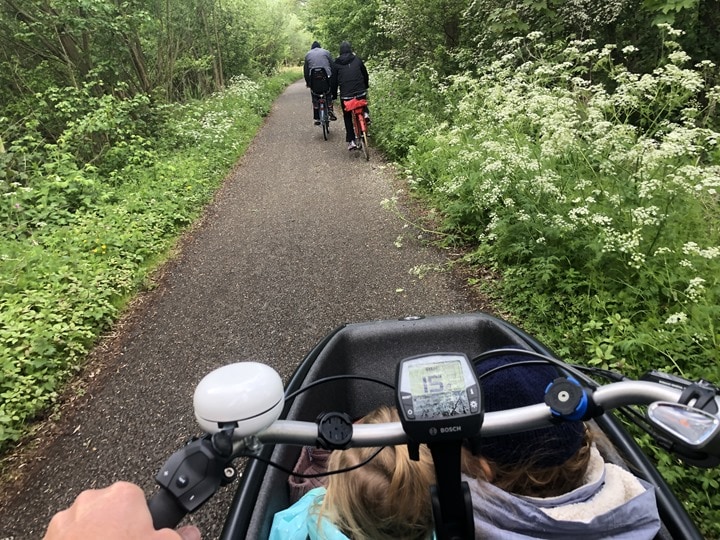 We’d bike out there as always, passing by horses, fuzzy long-haired cows, and boats. Plus old vintage trolley’s running on Sunday’s. All the things that the kids love to see. Of course – all in the aim of pancakes. 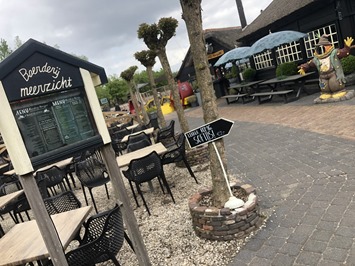 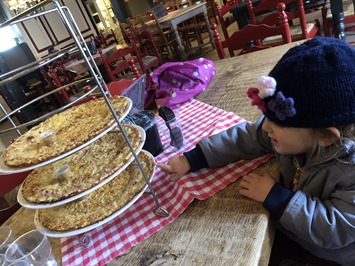 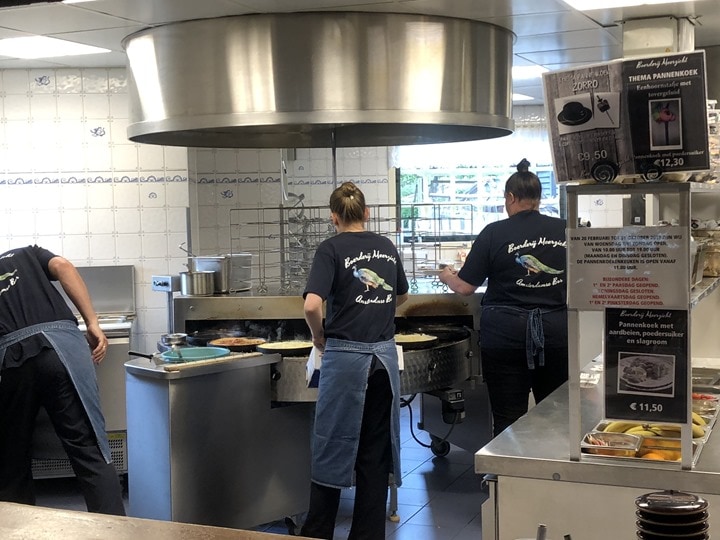 Whatever it is, it’s awesome for kids – but also perfectly great for adults that just want Dutch pancakes. 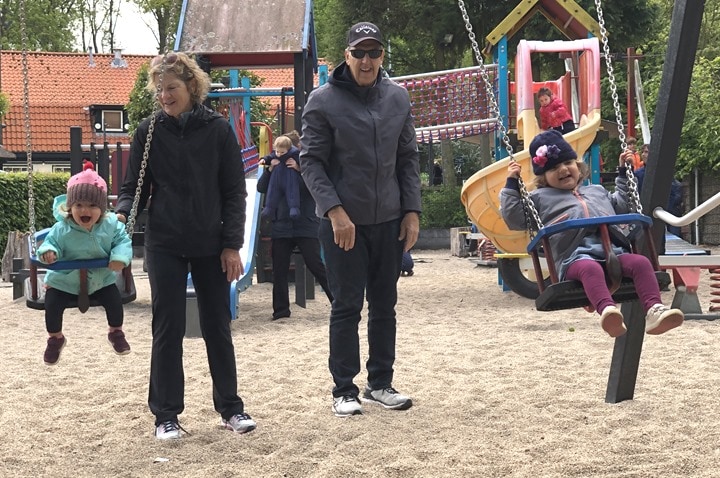 We’re lucky in that by bike it’s only 2.5KM away from the DCR Cave/Studio, and not much further away from home. So it’s quick and easy to get to.

5) Back to the Goats

After pancakes we decided to press deeper into the Bos (forest), this time going back to the goat farmhouse that we’d visited a number of weeks back. It’s here that you can pet pigs, cows, horses, ponies, goats, and even chickens if you can catch one. 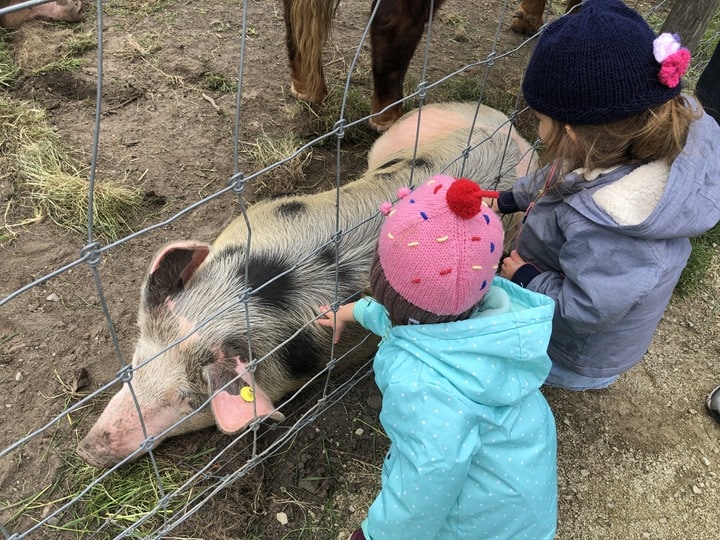 But mostly, it’s about the goats: 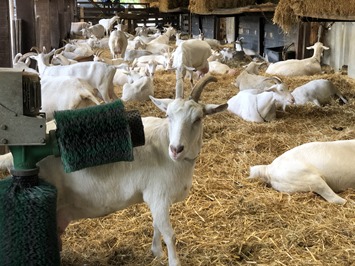 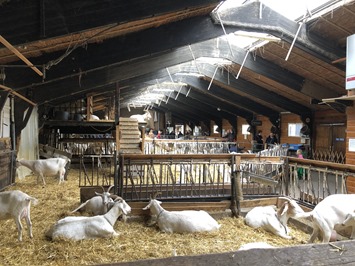 You can go in and pet, as well as give bottles of milk to baby goats. There are seriously more little goats than you can goat. I think three barns full of them. Plus the other farm animals. All of the goats are friendly too. And everything is free, unless you want to feed them, in which case you pick up a baby bottle of milk from the café for 1EUR. 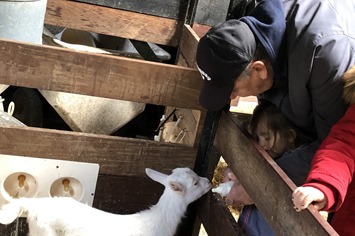 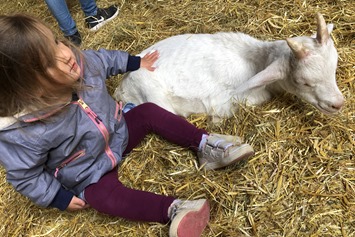 Like the pancake place, there’s plenty to do here – even roaming down to a bush maze of sorts. Or, you can just walk around the farm. 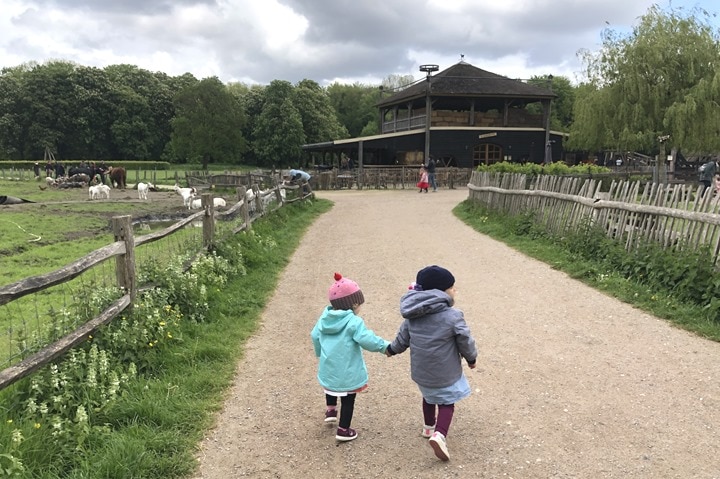 After we were done, we peddled slowly on back. It didn’t take long for either of the Peanuts to fall victim to the cargo bike’s sleepy powers. By the time we got home, both were totally out. 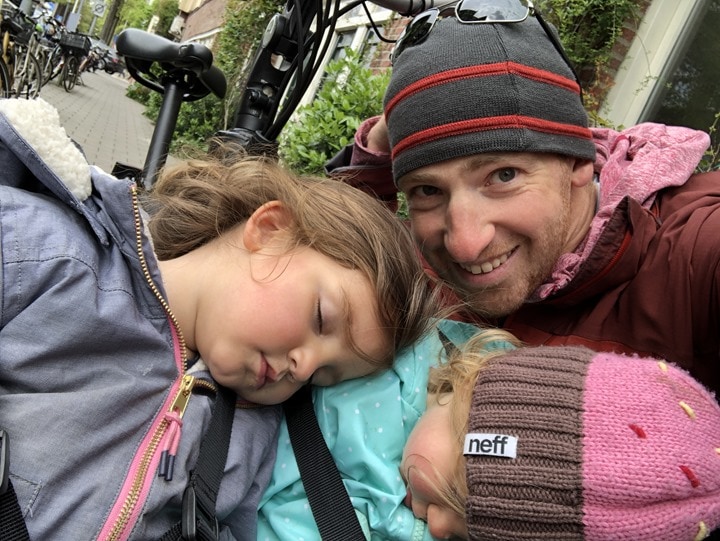 And yup – another good weekend in the books.