We’re down to our last 9 or so days here in Cape Town, and working to make the most of them! Here’s what we were up to over this past weekend.

Early Friday morning I headed out with Anthony on his bikes to ride around the lower portions of Table Mountain. Nothing fancy, nothing crazy, just a nice chill ride. 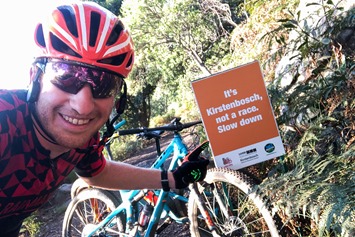 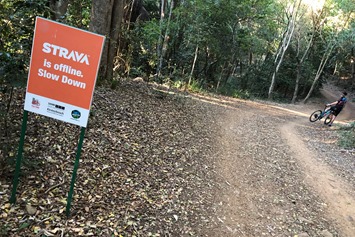 Also, I wanted to capture a bit more comparison video between the DJI OSMO Pocket and the GoPro Hero 7. It’s funny how hard it is to get the framing just right with these two darn things. For the GoPro it’s pretty easy because I can use my phone to preview it. But for the DJI, that’s less of a possibility unless you have the wireless adapter and then the whole thing becomes cumbersome. 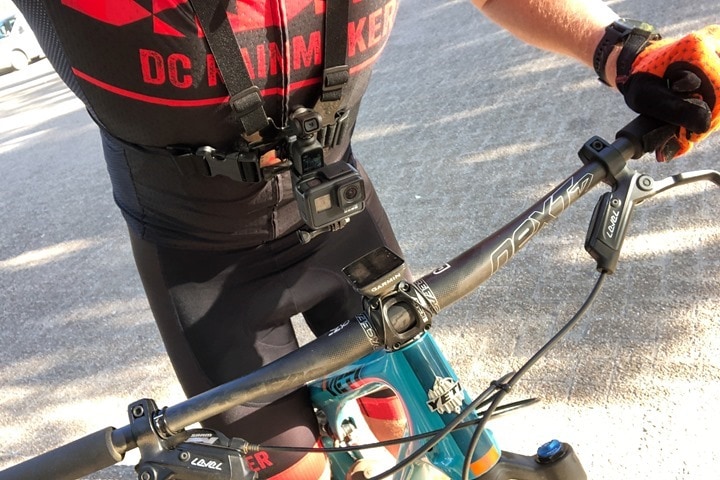 In any case, the ride itself was nice. Lots of people out and about hiking, and a few cyclists too. 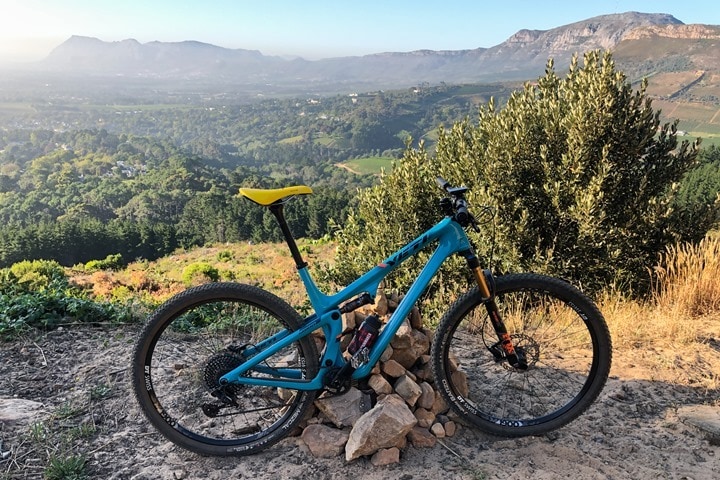 Plus, some nice views of one of the winery regions down below as we wrapped around the back of the mountain. 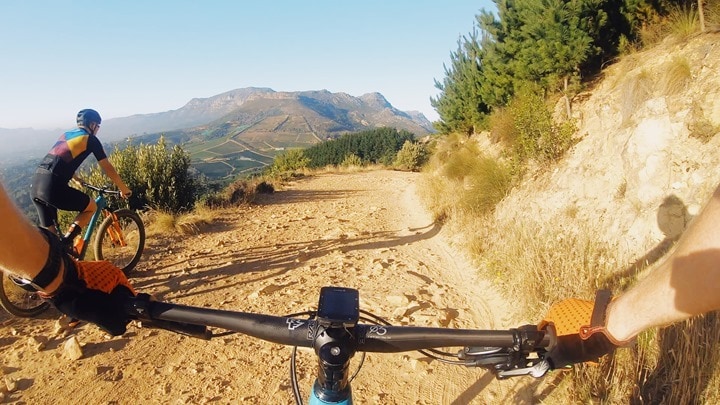 I’m definitely going to miss this off-road time once I get back home late next week.

Saturday afternoon we headed out to the beach with the little ones. It was both a nice warm day, but also not a windy day. And if we’ve learned anything from our time here thus far – it’s not so much finding the warm beach days that are tricky, but finding the non-windy ones. Else this beach (Camps Bay) becomes a pelting sand storm of pain. 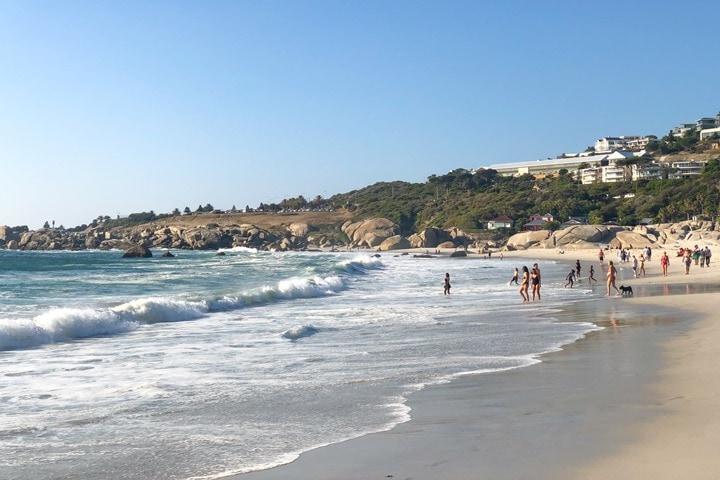 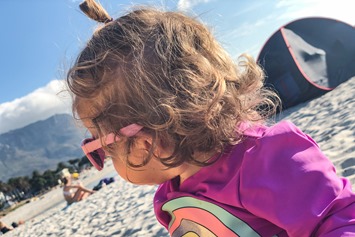 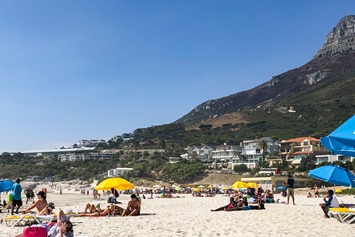 The weather was a stunner for sure, and the beach wasn’t too crowded either – making it great to play with the little ones without hassle. 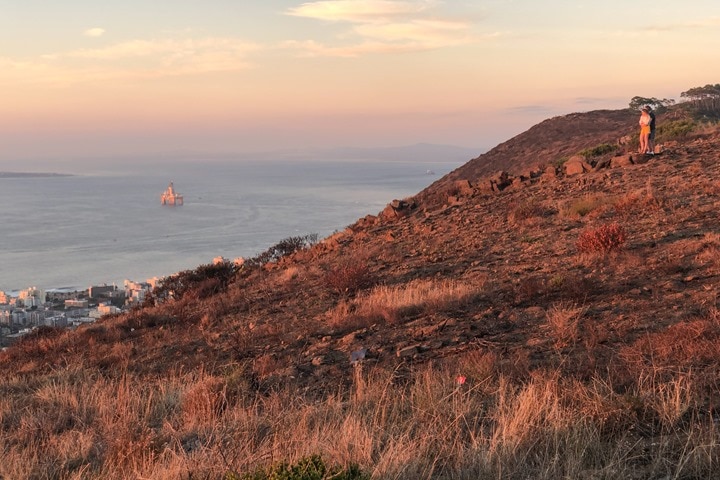 After the beach we drove back to the Airbnb, but about 5 minutes into that drive both children fell asleep. Grr…just before bedtime. So instead of trying to move them into bed half-asleep we said ‘Eff it’, and ordered pizza for takeaway. From there we drove up signal hill and watched the sun set. 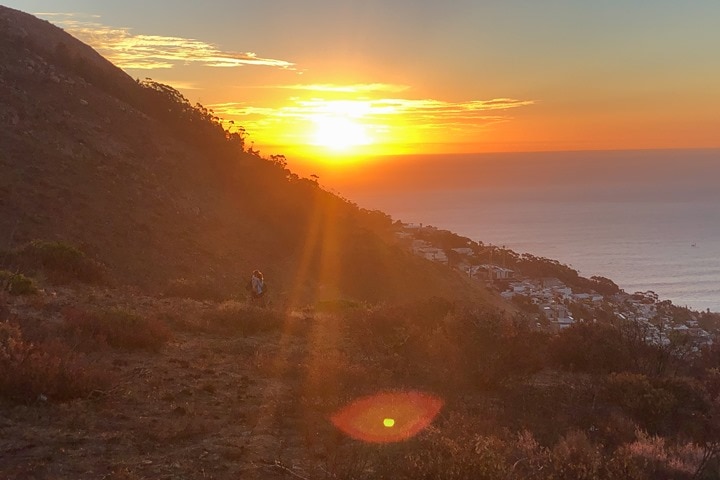 It had been on our to-do bucket list, since our place looks upwards to see the people lining the road each night to watch sunset. So this was two birds with one stone, since otherwise Peanut bed time logistics make the sunset a bit messier.

4) Riding to The Mast

Sunday morning it was back on the trails again, this time up one of the well known climbs off-road above Chapman’s Peak to the top of Constantiaberg, where a large antenna resides. Also known as The Mast.

I met with four other guys and we started our wandering towards the peak, which would take a bit over 90 minutes or so to reach. The pace wasn’t super hard, just enough for me to keep talking, but not quite enough where I could ponder mathematical equations.  Of course, some of that is simply that I don’t ride off-road a ton. Usually only 2-3 times a year, separated by many months.

In fact, in most years my entire mountain bike quotient is expended between what was Interbike (mid-September) and the ANT+ Symposium (1st week of October). Beyond that, it’s almost all-road all the time. So it’s a bit of a technical learning curve for a few rides before I’m at a functional level. 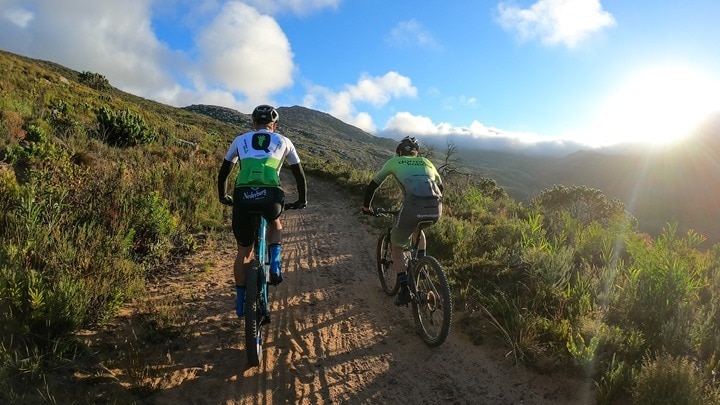 The last portion of the ride up to the peak is actually back on a road. The road comes out of nowhere though. One moment you’re on a mountain-side on jeep track, and then the next thing you’re on a road. But there are no cars. It’s purely a service road for attending to the antenna up top. And with 12-16% grades, it’s needed to keep traction for most vehicles. 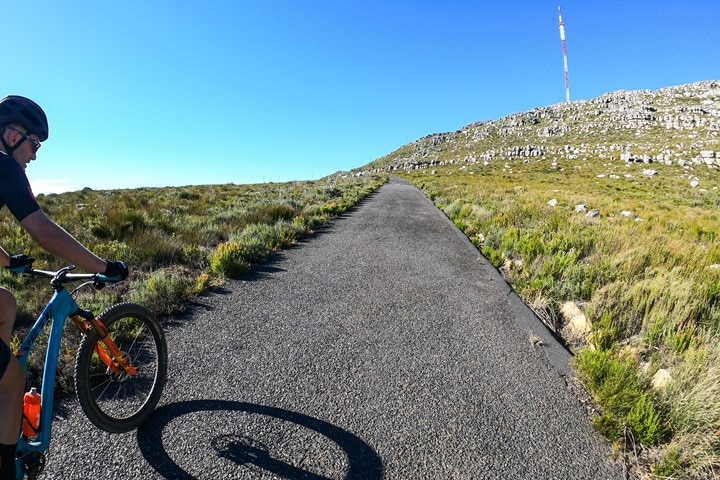 Once you reach the end of the road, there’s a short 3-minute hike sans-bike to reach the very tippy-top.

It’s here I was able to grab a couple of quick snaps: 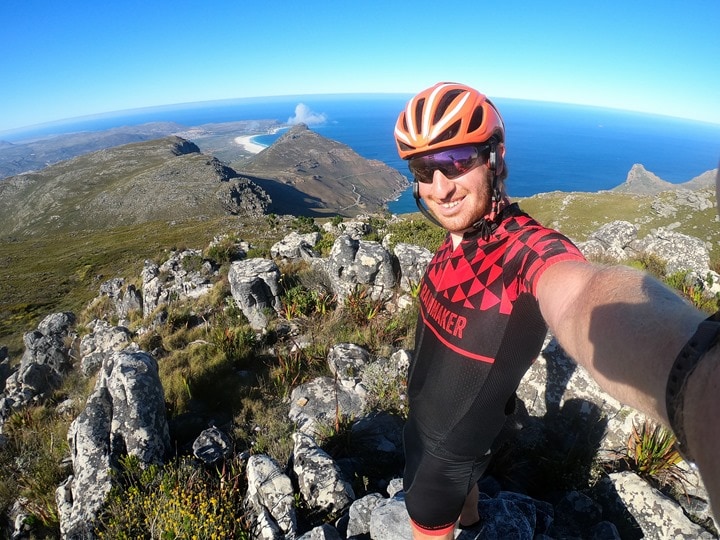 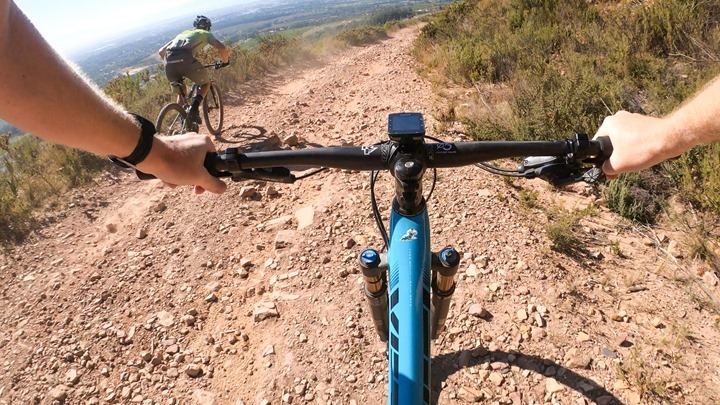 If I lived in the area, I could see doing this route quite a bit – the views are awesome, and the terrain wanders enough to keep things interesting.

Oh, and I had a once in a lifetime sighting: 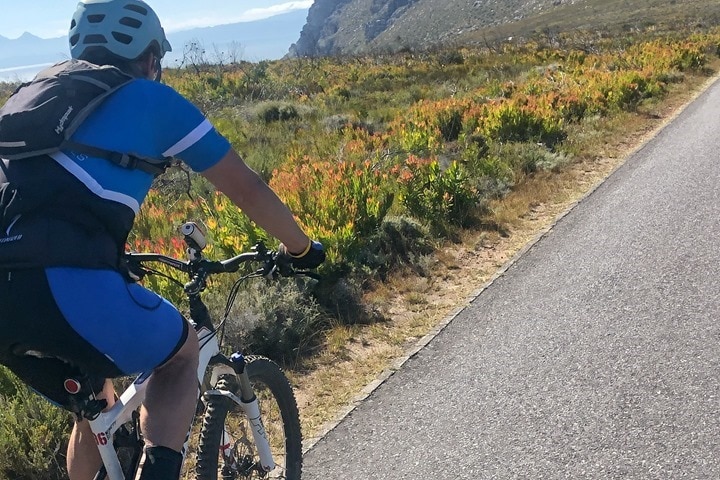 Yes folks, that’s the rare TomTom Bandit action cam seen out in the wild on this cyclist’s handlebars. Aimed for that close-up non-stop tire shot.  Thus marking exactly two of them I’ve ever seen in real-life outside my review. Poor thing was both behind and ahead of its time.

(Oh, and here’s the full ride on Strava)

5) Finding my GoPro on the trails

Finally, while this could technically fall under the previous bulleted item, I’m going to pull it out over here, because it’s entertaining enough on its own. It’s either that, or photos of me endlessly pushing a stroller around the waterfront trying to get The Peanut to nap.

See, remember when we had to walk the short distance up to the very peak to take photos? Well, eventually we had to walk down. And as I was walking down I realized it would be logical to put the GoPro in my back jersey pocket so if I tripped, I’d have my hands to catch my fall. I’ve done this thousands of times before (GoPro in pocket, not falling). Then from there I ended up doing a bit of a jog, since it was easier to run downhill than walk.

Somehow along the way it fell out of my pocket. Between exactly where I took this photo below, and the antenna:

So I wandered back up the trail hoping it might have just fallen directly on it. As one can see there’s tons of shrubs around it, so if it was off just a few inches, it’d be very difficult to find. On the first up and down pass – no luck.

But it was as I was searching that I realized I could harness the power of technology!

See, my phone is paired to my GoPro, and I could use that to first gauge if I was close or not. The GoPro connects initially over Bluetooth Smart to establish the connection, and then from there it turns on WiFi for all the heavy lifting. Bluetooth Smart typically has a much shorter range. So I’d simply walk along the path until the Bluetooth Smart icon illuminated.

Then, once that happened I’d turn on WiFi and control the camera.

Sure enough, about half-way up the trail the icon turned blue meaning a camera was within range. So I then tried to turn on WiFi – but no luck. I walked a bit further and it finally turned on WiFi and gave me a view of…a shrub. Great!

At this point I started taking photos and occasionally video when I’d hit the button wrong twice. But why?

Well, the GoPro actually has a really loud beeper on it – and it beeps every time a photo is taken (and if you had set it to silent mode you can still even change that via phone settings to re-enable the beeper). So I just kept taking photos until the beeping got louder and louder. Eventually, Paris (one of my riding buddies) pulled it out of a bush about a meter off the trail. 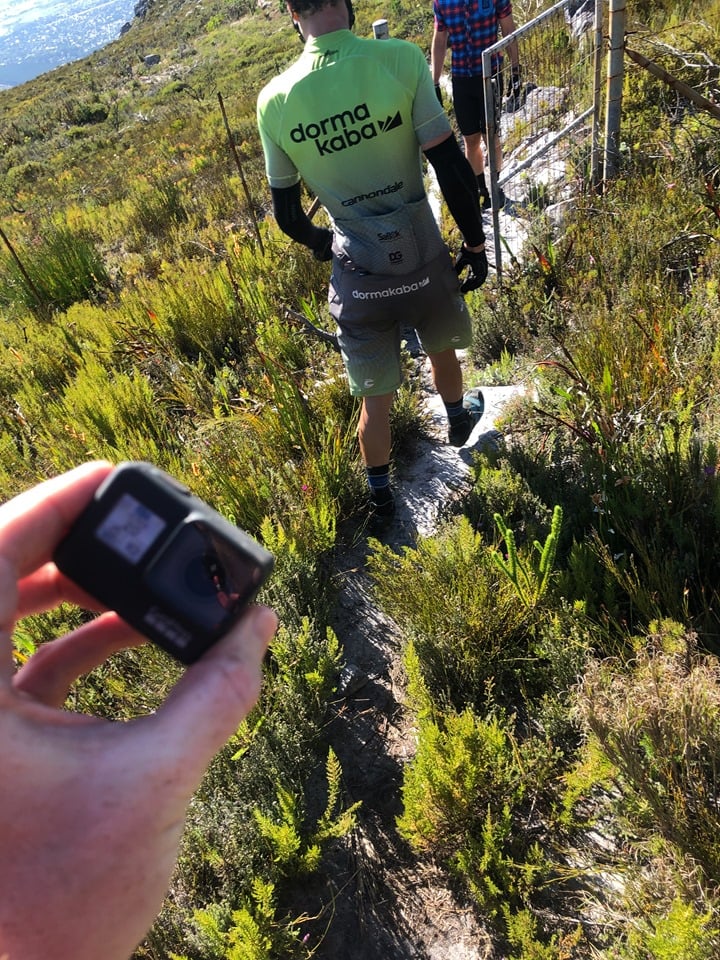 Of course – this is a million times easier since I knew within a 200-meter stretch where it was. Whereas if you lost it on a 10-mile stretch, that’s a whole different game of very painfully slow cycling until you found it again.

In any case, the entire delay of game probably only lasted about 5-8 minutes – so it was pretty efficient. Still…sorry guys!

Funny enough – this is the first time I’ve lost the camera on dry land. I have however lost GoPro’s at least three times off the back of boats – in all three times I’ve managed to get them back. Twice while anchored where I had to dive down about 10-15 meters to get it, and the last time off the back of a touristy boat in Thailand and we went back to the island an hour later to find it on the reef.

In any case – here’s to hoping your week ahead doesn’t involve any GoPro lose scenarios. Enjoy!