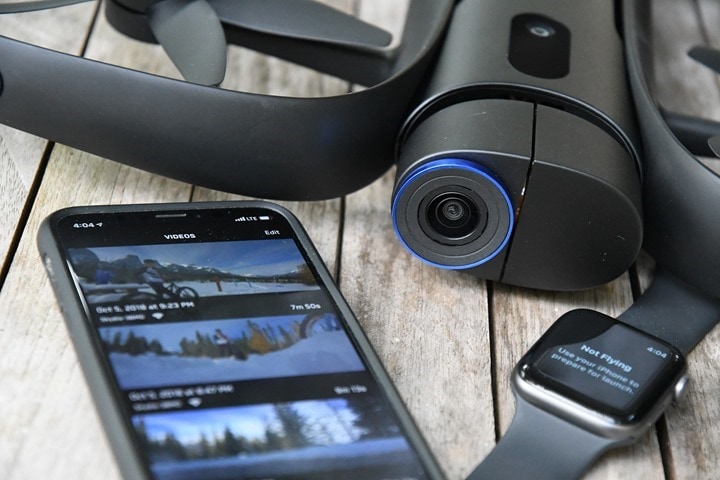 I don’t usually cover the slew of app announcements for the Apple Watch – but this one is definitely different, and, if you’re looking to get cool action video of yourself – then this is also unique. As of today, the Skydio R1 drone can now be controlled from your wrist. This allows you to stash your phone somewhere logical, safe, and out of view – while being able to change up the camera angles.

You may remember the Skydio R1 drone from my review I did this past spring. It’s the crazy drone that has 13 cameras on it that follows you non-stop like a scene from a scary movie. It’s quite impressive. If you didn’t see my full review, just watch this little tweet video I did then. Don’t worry, I’ll wait.

As you can see, crazy stuff.

But it had some limitations. First, while you could stash your phone in your back pocket/whatever while riding/running/etc, you couldn’t control the camera. That meant that you’d basically just get a single static shot – or a single predefined movement (such as looping around).  With the Apple Watch control though, the world’s your oyster.

The setup process is pretty easy here. If you’ve got iOS and an Apple Watch, you can specify to add the Skydio app to your Apple Watch. It only takes a moment to sync over and enable:

Behind the scenes the Apple Watch and Skydio app maintain connection via Bluetooth Smart (watch to phone).  So a phone is still required, as the phone then uses WiFi to connect to the R1 drone. In other words, the phone remains the middle man for sending commands – which is honestly just fine.  The actual tracking is done optically via all those cameras on the R1, however, it can leverage your current position in case it loses track of you behind some other object (like a shrubbery or hot dog stand). 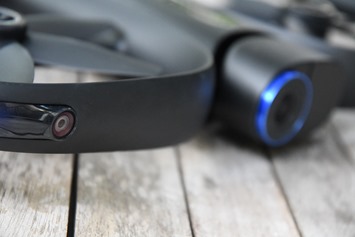 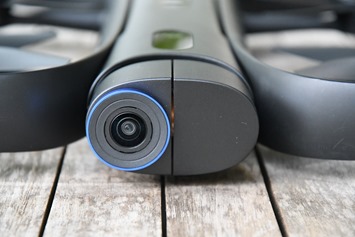 You’ll take-off the R1 like normal with the phone, though, you can land it with the watch. Once up in the air, you’ll want to get yourself situated in front of the camera somewhere.  You can use the digital crown on the side of the watch to pan the drone, effectively rotating it to get yourself in view. 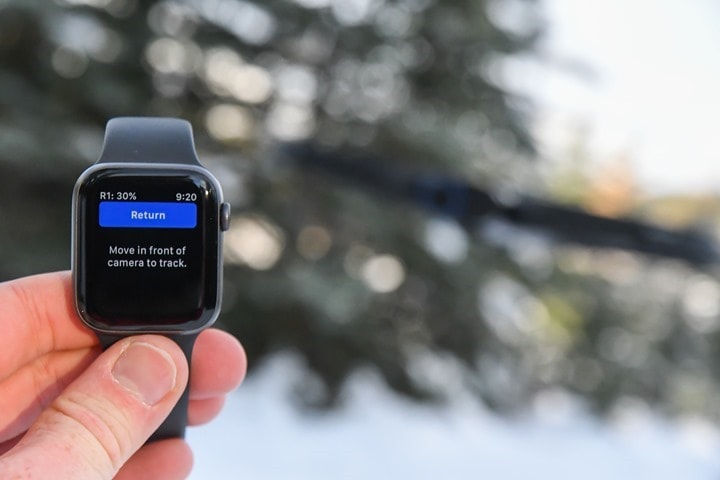 Once that’s done though you’ll see it ‘list’ the humans/objects it sees to track on the watch itself: 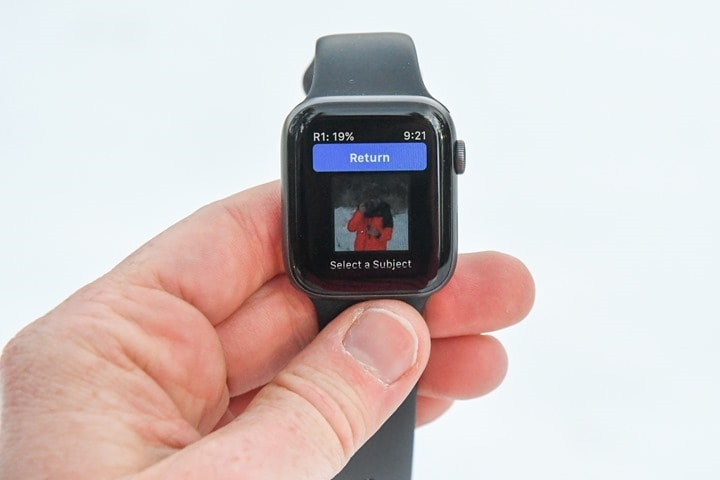 Sorta like picking friends in a social media app, it shows a little live video snippet of each one side by side. The refresh rate of this live video is like 1 frame per second, but that’s more than enough to figure out who is who.

After tapping an individual to track, you’ll then be able to see all the camera controls. Of course, with drones, camera controls also double as drone controls. If you tell the ‘camera’ to orbit around you, you’re effectively telling the drone to do so as well.  The commands are divided up into two groups, presumably by the most used ones first (as well as a few more beyond the four you see below) : 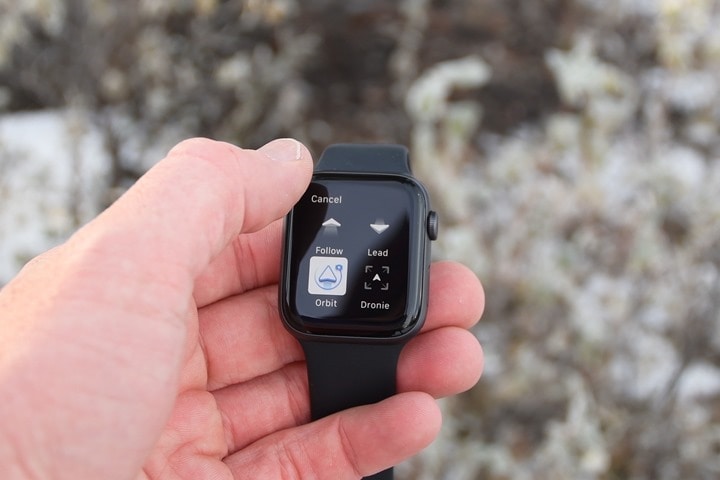 And then a separate grouping where you can access even more commands/actions: 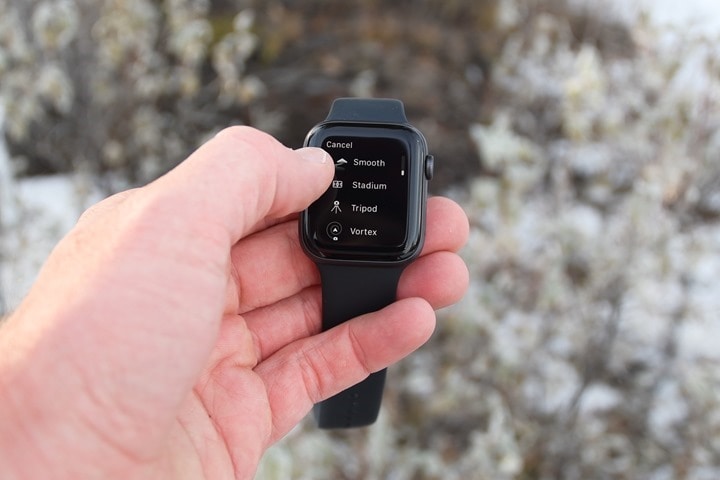 It’s frankly as simple as tapping the command you want and the drone goes off and does it.  Keep in mind that all of these commands are about following you. So you can keep doing what you’re doing (like riding a bike), and just iterate through the different camera controls.  If you want it to stop doing a specific movement, you just tap the stop button. You’ll also see the battery remaining in the upper left corner. 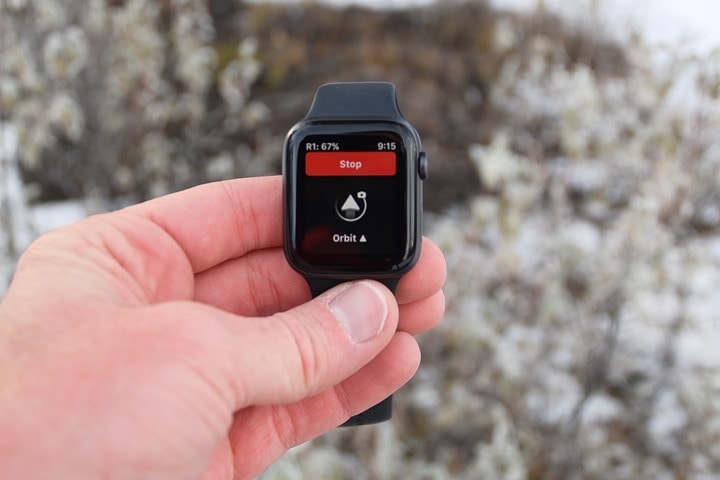 The thing with most drone footage of action sports is that it’s less about capturing an entire ride non-stop (especially since the battery on the R1 is only about 15 minutes), but more about capturing B-roll and other snippets to use as part of telling a larger story.  Most people don’t want to watch you doing your thing for 15 minutes straight anyway (let alone 30 or 45 minutes).  Of course, some do, but the majority of times you just want to compile a 3-5 minute highlights clip.

Up until this point, on any drone, iterating different angles was tricky at best while trying to do a moving sport.  The other piece here is that I can even track someone else and then ride behind them controlling the camera.  Which, is exactly what I do in the below video I shot a few weeks ago:

All in all, the watch control piece works pretty darn well. About the only thing I’d like to see at this point from a control standpoint is to be able to build a set of commands to give it and have it iterate through them. Effectively say: 1) Do follow for 60 seconds, then orbit for 60 seconds, then do a dronie, and so on.

While this might sound overly complex – it’s just automating exactly what the watch is doing, and for action sports folks, minimizing the amount of things you have to do (and thus be seen doing in the video) is what it’s all about. I figured I’d mention it…just in case folks were listening. 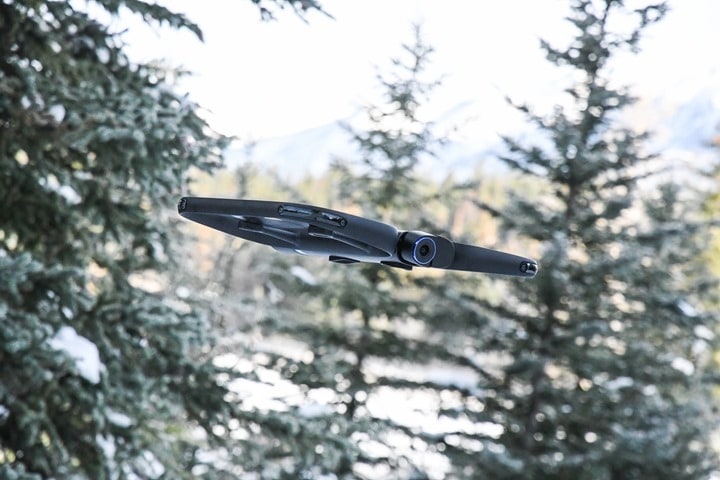 Of course, as cool as this is, the R1 is still a bit of a tough sell – namely due to price. While the drone did get a price drop from $2,500 down to $1,999 (in part due to removing one extra battery), that’s still double most other popular prosumer drones in the marketplace (and four times the cost of many more popular consumer units).

Atop that, the quality as you can see is still not as sharp as their competitors. While it’s 4K, it’s just not awesome 4K. I filmed that video above a mere few hundred meters away with the DJI Mavic 2 (Zoom and Pro) videos that same morning – and the quality difference is stunning. True, Skydio has done some good work on minimizing the bob and weave aspects since spring via post-processing, but it’s still lacking on baseline video quality.

On the flip-side, even despite DJI’s recent improvements in Active Track 2.0 (in Mavic 2 series – review tomorrow on that), the DJI unit comes nowhere near the tracking levels that Skydio has. Nor the obstacle avoidance/tracking abilities. Skydio’s is simply next-level in comparison (as it should be with more than a dozen cameras).  So while DJI may win for overall all-around usage, the Skydio is in a league of its own when it comes to sport tracking.

Of course – as Skydio’s model naming implies – the R1 is ‘Release 1’, and they’ve long noted that they see this as a bit of a starting point for their (very well funded) company. If they can find a way to shrink the size by half (at least in carrying size), the price by almost half and the quality up by a pile – then I’m definitely a buyer.

For now – though, the watch app does help push it further along the track of having more of a sports focus than DJI. So hopefully when an R2 comes along, this is just icing on the cake. Still, if you have the cash and you have the use case – there’s nothing else like the R1 today.