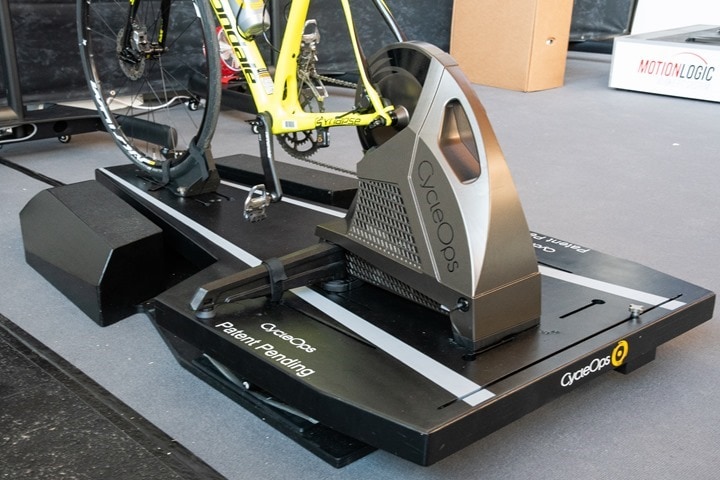 This year at Eurobike it’s all about the very unique products. Be it the Elite Fuoripista or the Tacx Neo Bike Smart, companies are throwing out products that are pushing the boundaries of what we know of as indoor training products today.  And in this case, CycleOps is taking what is mostly a fringe garage idea – rocker plates – and looking to see if they’re the next best bet in elevating the indoor trainer dream cave.

Of course, rocker plates aren’t new to 2018. They’ve been around a few years in varying forms.  In fact, even before all that we had the Kinetic Rock and Roll trainer, which rocked side to side on a large frame.  Rocker plates took that concept and allowed one to put the entire bike plus trainer on it – enabling that side to side swaying motion.  However, such plates largely existed in the realm of DIY garage products, save a handful where the makers have branched out into selling small batches of them online.

The other challenge was that such motion wasn’t always super realistic.  In some cases the bike was actually moving opposite what it should, and in others the lag related to different responsive materials didn’t mimic outdoor riding as much as one hoped.  It was certainly different than a static trainer…but not necessarily the same as the open road.

In any event, that’s what CycleOps is hoping to change.  Do note that this is halfway between a real product and a concept one.  The company says they’re definitely treating it as a product that they’re hoping to release down the road, but there isn’t a timeline set.  But they’re also trying to gauge the market and determine whether there’s demand for such a product…and if so – at what price point.  Thus, what you see here is still fairly early in the product cycle. So much so that it doesn’t even have a name. 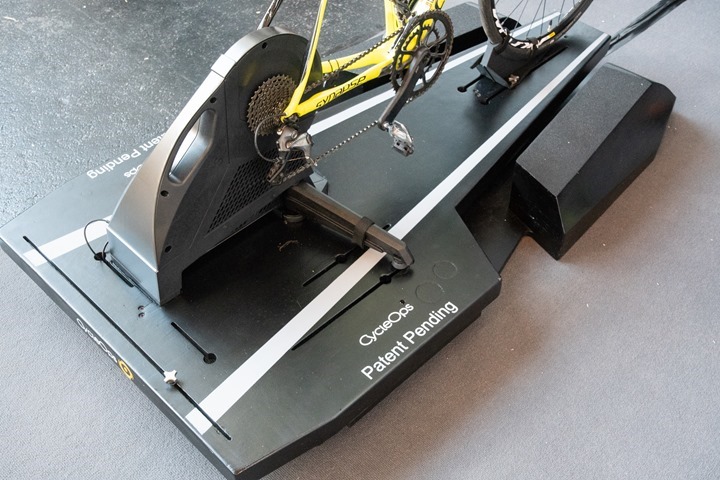 Of course, while CycleOps hasn’t given it a name yet, I have: The CycleOps Thing.

The CycleOps thing is essentially the granddaddy of all rocker plates.  Not only does it rock side to side, but also front to back as you accelerate.  It does this through a series of four different touch-points across two moving platforms.  Think of it roughly like two slices of bread with a bunch of rollers and springs between them.  Atop that upper slice of bread is you and your trainer.

Note that I said ‘your trainer’. Not ‘a CycleOps trainer’. That’s because the CycleOps Thing will work with any trainer on the market.  The company has added small slits into the design to allow straps for a variety of wheel-on and direct drive trainers. 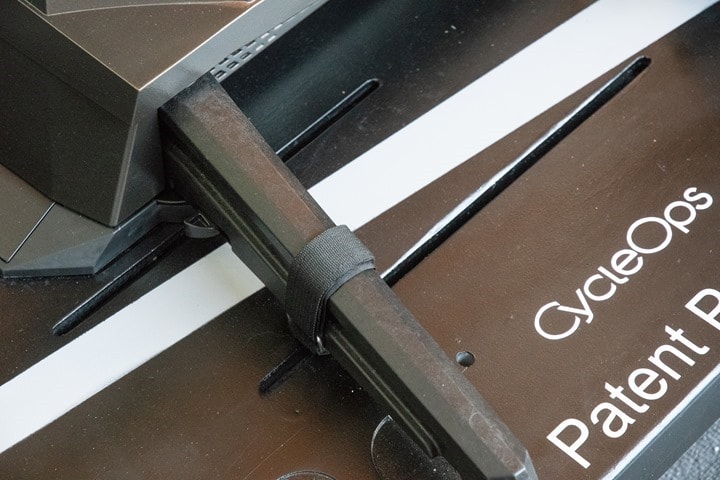 And in the case of their own trainers they’ve even etched out little feet landing pads that you can see below: 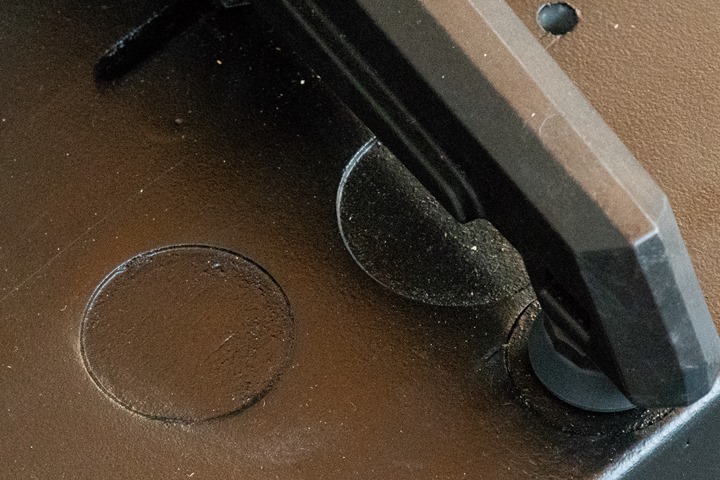 This universal compatibility is a very different design choice compared to Wahoo and their CLIMB device, which is only compatible with Wahoo trainers (and even then, only recent ones)

On the front end, the wheel has a small adjustable wheel lock/block to keep things all on the straight and narrow up there: 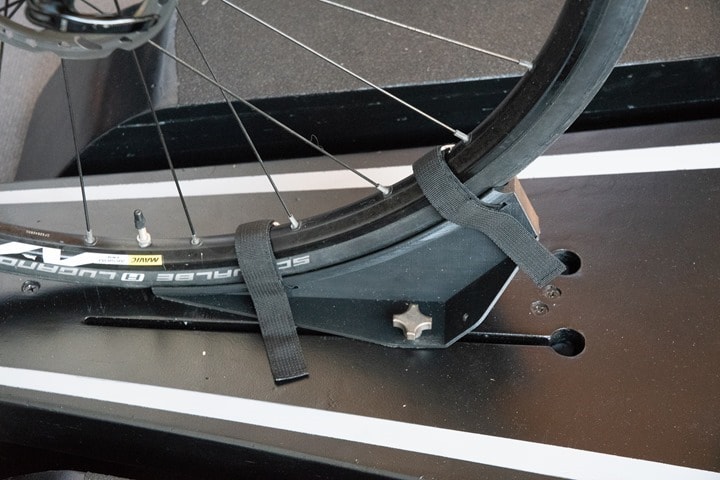 If you’re familiar with either the Kinetic Rock & Roll or other rocker plates, you know that sometimes getting alignment is a tricky thing.  You can end up slightly tilted to one side or the other.  With the CycleOps Thing there are two ways to address that.  The first is the ability to increase/decrease tension on the various springs on both sides.  This also helps with lighter or heavier riders and getting the right resistance levels.

The second is a counterweight along the back, that allows one to quickly shift the weight accordingly to level things out.  This is ideal if a trainer isn’t balanced from a centering standpoint compared to the bike. Trainers generally weren’t designed to be perfectly centered weight-wise on a floating platform, but rather designed for stability on a chunk of hard ground. 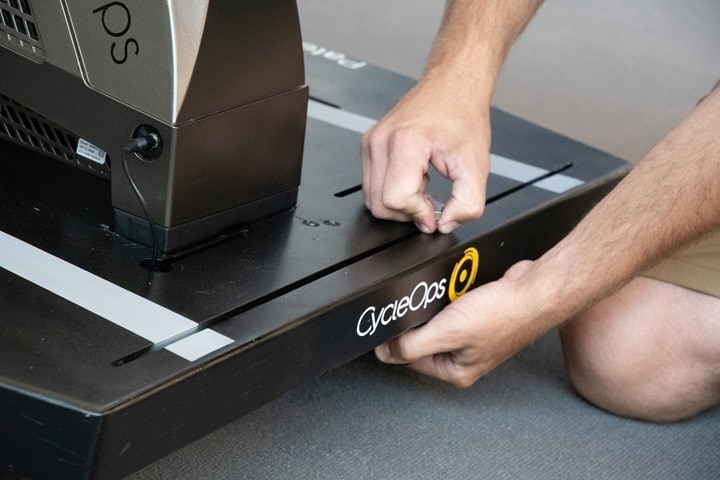 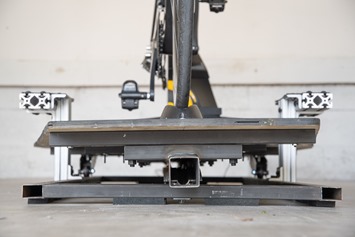 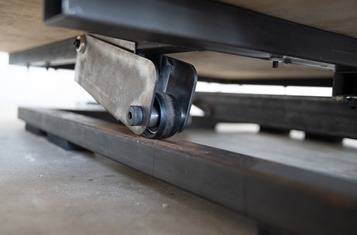 The niftiest part of all? There’s zero electronics in this setup. It’s purely mechanical. That means there’s one less device to charge and firmware update.  Or at least, that’s the way I look at it. 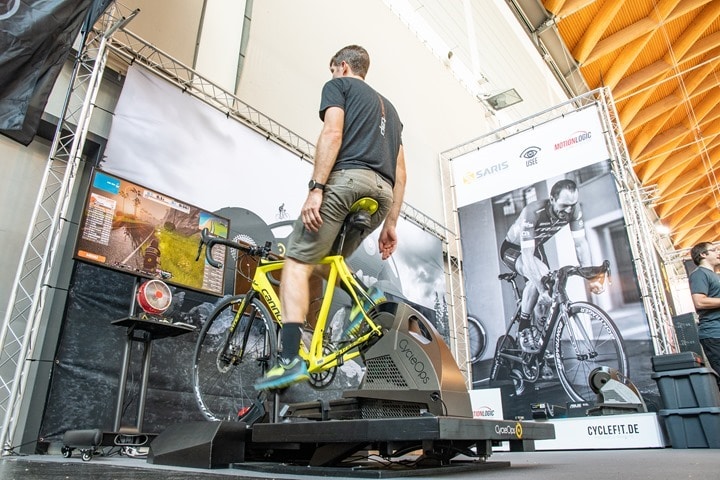 I’ve had a chance to ride two sets of these over the last month.  The first was an earlier prototype set while I was down in Florida, and the second was a later prototype set here at Eurobike.  The first looked a bit more homemade, while the second was clearly a bit more polished.  Still, neither are anywhere near final production levels – in particular with respect to materials.  The final production units (assuming CycleOps ends up there), will be a molded plastic that folds in half for easy transport.  They envision something roughly the size of two wheel bags in terms of end-state size.

Still, they believe what they have today represents something very close mechanically and ride-feel to what they’re looking to produce down the road.  So, I gave it a whirl.  The best way to see that is this video though:

Overall, I’d say that the first minute or two it takes a little bit of getting used to.  After all, your mental world of trainers staying put is thrown out of alignment.  No matter how much we want to believe we’re riding outdoors, the reality is that we’re still indoors staring at a wall or TV.

Once you do get used to it though, it feels more natural than the Kinetic Rock & Roll.  It’s not quite as side to side smooth as riding rollers (but then again, that’s more difficult for most people).  But overall I think it feels like a better experience.

What I’m looking forward to though is spending lots of time riding it, perhaps even with a KICKR and KICKR CLIMB atop it.  Fear not…that’ll happen very very soon.  So hang tight for some more detailed thoughts there.  But first impressions are certainly positive. 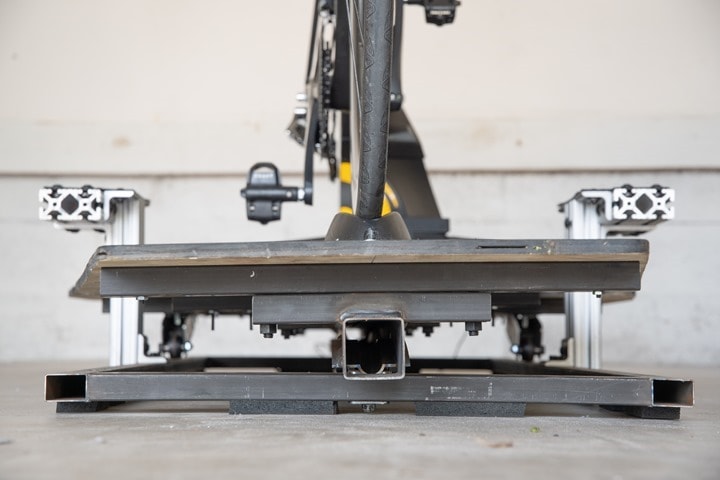 As I alluded to at the top of this post, there isn’t a super-clear avenue or timeline going forward for the CycleOps Thing. It sits in the realm of half-concept and half product in progress.  Like others at Eurobike, it sounds like CycleOps is looking to find whether there’s interest in this space, and more importantly – at what price point.

The company says they’ve actually done a fair bit of research with academic folks (and have shown me the data as well) digging into where and how people’s touch-points with the saddle are influenced in different riding situations (outdoor vs indoor, other plates vs this, etc…).  All by hooking up a bunch of sensors to people’s butts.  So while this project may appear to manifest itself as merely two large slabs of moving bread plastic, there’s more behind the scenes than meets the eye.

Personally, I think companies like both CycleOps and Wahoo should be rewarded for trying new things in the indoor trainer space that just aren’t yet another $599 mid-range trainer (though actually, CycleOps did that too with the barely updated Magnus 2, now called M2).  Some of those things won’t be for everyone – and that’s just fine.  But sometimes they’ll stick the landing – like the Wahoo CLIMB has seemingly done.  And I suspect if CycleOps can get the pricing right here, the platform’s ability to hold any trainer will carry it through much further than they probably realize.

Another good example about how even when no actual electronics are involved, being ‘open’ is often the best way to go.

With that, I’ve just gotta find a way to fit it in the DCR Eurobike RV to take back home for further testing.  Anyone got any bungee cords?

I’ve partnered with Clever Training to offer all DC Rainmaker readers exclusive benefits on all products purchased. You can read more about the benefits of this partnership here. You can pick up the MP1 through Clever Training using the links below. By doing so, you not only support the site (and all the work I do here) – but you also get to enjoy the significant partnership benefits that are just for DC Rainmaker readers – namely in this case 10% off your order using DCR Coupon Code DCR10BTF. And, if your order ends up more than $79, you get free US shipping as well. Double-win!

Additionally, you can also use Amazon to purchase the unit (though, no discount/points). Or, anything else you pick up on Amazon helps support the site as well (socks, laundry detergent, cowbells). If you’re outside the US, I’ve got links to all of the major individual country Amazon stores on the sidebar towards the top.