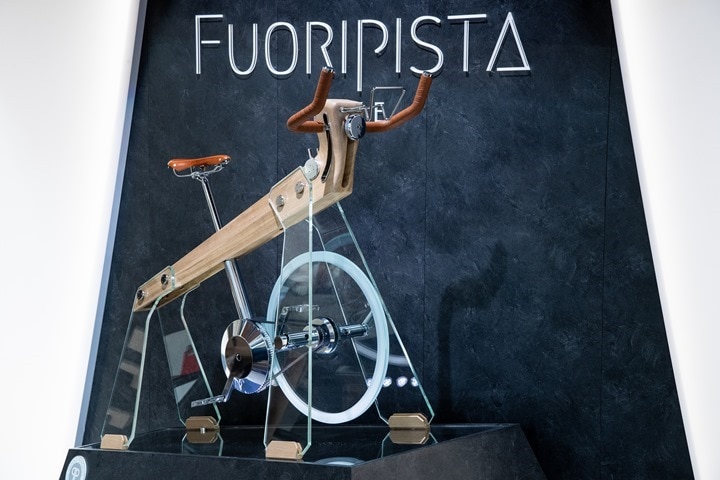 I anticipate the cheapest sports technology gadget I’ll release a review or early look on here at Eurobike 2018 will cost about $60. But perhaps I’ll end up finding something that fits into my realm for cheaper.  What I don’t expect though is to find anything more expensive than Elite’s stunningly beautiful Fuoripista indoor smart bike/trainer.  This Italian stallion comes in at a mouth-drying 14,000EUR.  Well, technically, the range is 12,000-14,000EUR – but let’s not get caught up in the details.  For anyone purchasing this, that’s a mere rounding error.

The Fuoripista is Elite’s most brazen creation to date – a collaboration with another high-end Italian firm to release a blend of artwork and high-end Zwiftable trainer all wrapped up in one.  It is indeed a real trainer, communicating via ANT+ & Bluetooth Smart, while also sporting gear shifters to virtually shift gears while riding around Watopia (or, to increase the wattage in TrainerRoad).

While this may not end up in your living room (and certainly not relegated to your garage), I suspect all of us can at least temporarily enjoy a look at this blend of high-end art and high-end tech all swirled into one.  Even the day before the show, as construction workers buzzed around the show floor frantically putting together booths, many stopped to take photos of it.  It wasn’t like any of the bikes seen anywhere else in the giant 7+ hanger sized halls of Eurobike.  But that’s kinda what Elite wanted.  In that respect, they’ve probably already succeeded. 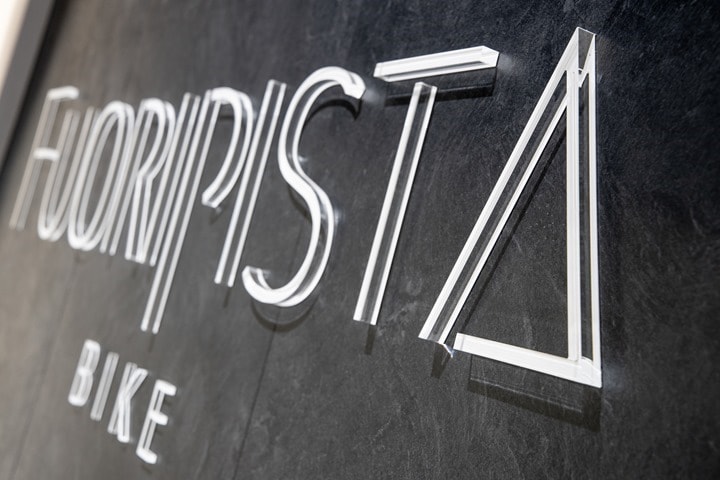 Starting from the outside, the Elite Crazy Horse Fuoripista frame is largely glass and wood.  The varnished wood is treated such that it’ll resist stains from sweat and Gatorade splashing about it.  Meanwhile, the double-layer tempered security glass can also double as a shield in the middle of a shoot-out, it’ll give you a double-take as to just how thick it is. 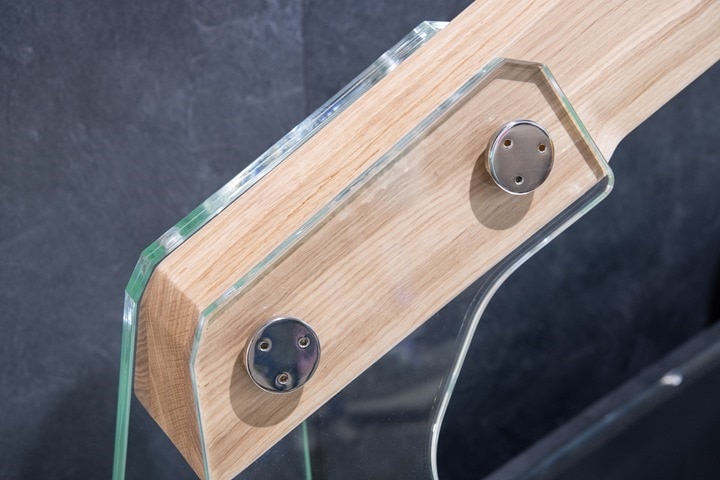 While it’s sold/branded from Elite, it’s actually a collaboration with another Italian firm that’s made $10,000-$12,000 high-end foosball tables.  They’re focused on the design aspects, while Elite is focused on the technical and cycling aspects.  In my riding it, the two seemed to have blended well together.

Starting at the front of the bike, the unit has a tablet holder that carefully balances a tablet of your choice.  This tablet then in turn connects to the Fuoripista using either ANT+ or Bluetooth Smart.  The tablet is what’s likely running the app of your choice – such as Zwift, TrainerRoad, or Elite’s own app. 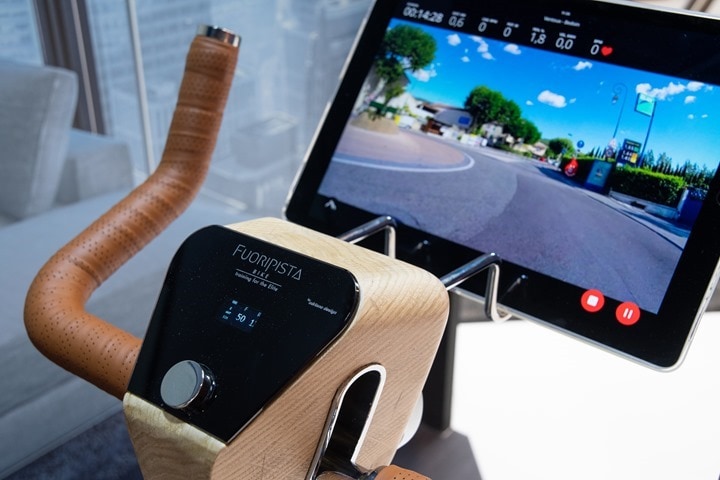 The Fuoripista supports ANT+ FE-C, Bluetooth Smart FTMS, and all the usual power broadcasting tech seen in the rest of their trainer lineup.  In fact, you can see the connection status on the small screen embedded in the top of the device.  This screen serves to also inform you of your wattage and gear shifting status. 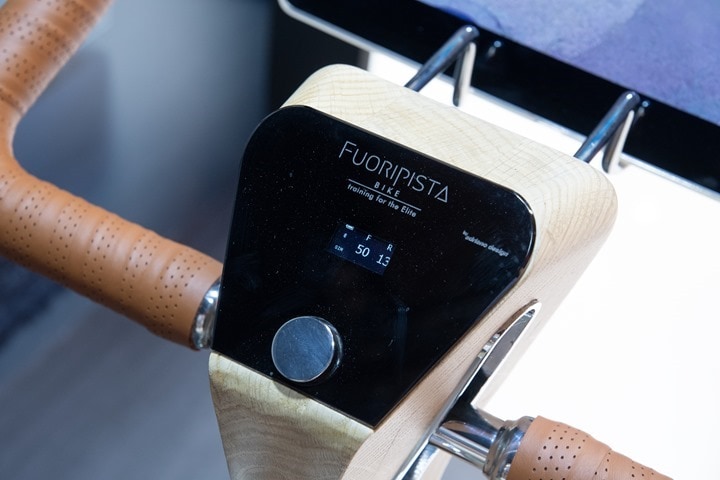 Like the Tacx Smart Bike that was fully unveiled today, the Fuoripista has virtual gear shifting.  This allows you to iterate through a virtual gear selection using two levers.  The left lever controls the simulated front chainrings (I.e. big and small ring), while the right lever controls the rear cassette.  You can iterate through these as you see fit like normal bike shifting. 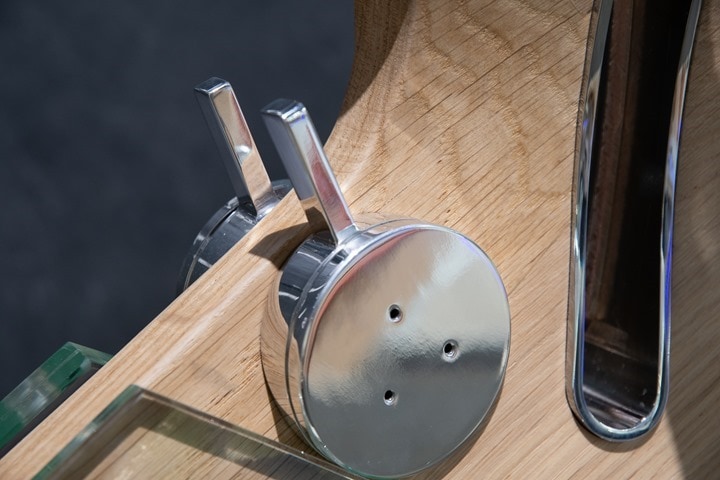 Wrapping up the front of the bike you’ve got the handlebars.  These are adjustable using the large metal knob on the front, which then moves them up and down along a track.  The entire handlebar setup feels heavy and well built – beastly really. 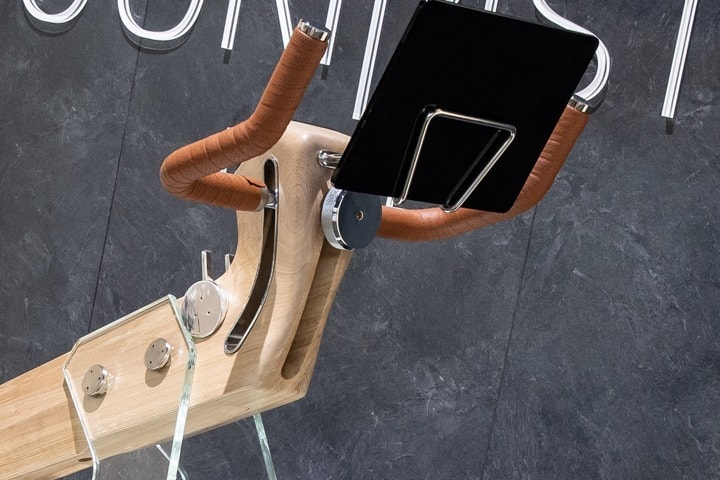 Before we head down lower, I’ll note that the bike seat is adjustable up and down.  At present you’d use a hex wrench, but by shipping there will be a small lever you can utilize to adjust seat height.  Of course, a bike this expensive comes with a swanky saddle, but if you want to swap out for your own saddle, you can do so.  I’d note that the included saddle, when combined with my kit, was like riding a slip and slide – incredibly slick. 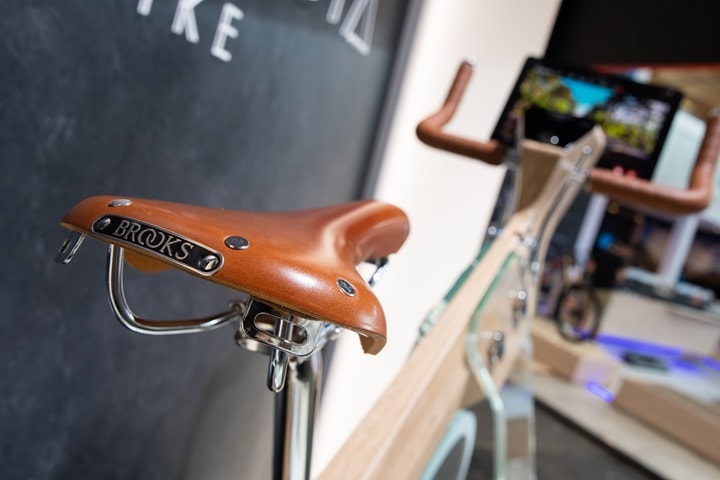 Finally, getting down to business on the tech side.  Below all that glass and wood is a complete Elite trainer, just a very polished one.  It’s a bit of a blend between an Elite Direto and an Elite Drivo.  Not specifically one or the other, but roughly in the middle spec-wise from a power standpoint. 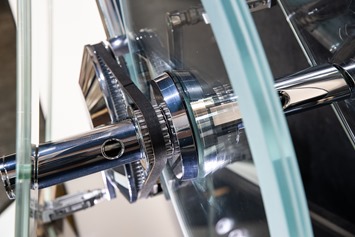 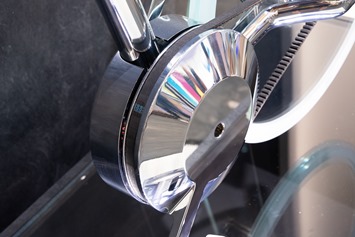 The bulk of the road-like feel comes from the 20KG (44LBS) flywheel – the gigantic glass disc up front. That makes it one of the biggest physical flywheels in the indoor training space.  You’re getting your money’s worth here (and also contributes to the units’ overall 100KG weight). 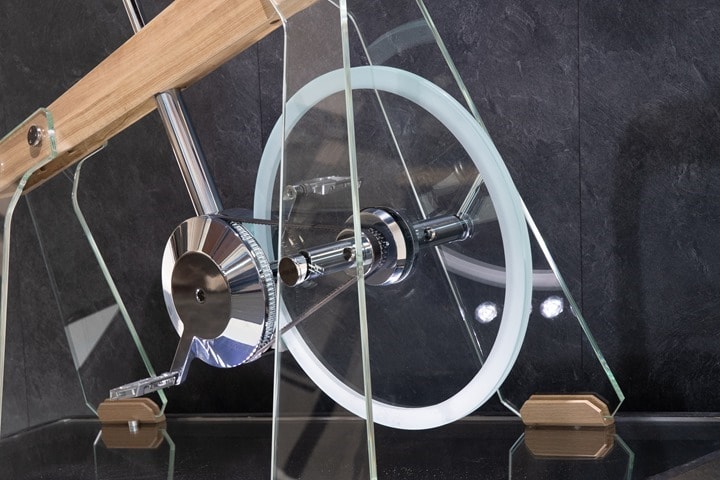 In the event a small critter approaches the front of the bike with its massive flywheel there’s an emergency brake located on the handlebar console.  That small button will near instantly stop the wheel and submit you to a 10-second penalty box.  After which you can pedal again. 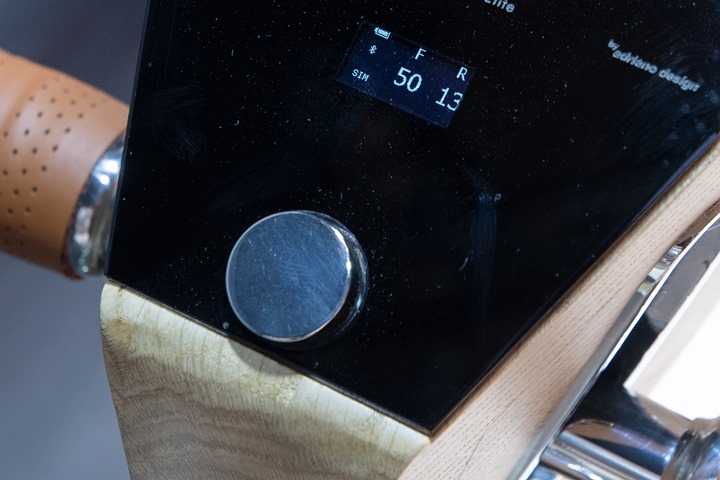 Meanwhile, the trainer portion is powered using an internal battery inside the unit roughly below the seat.  The battery can last about 10 hours before you need to plug it in again. Or, you can just leave it plugged in.  But we can’t have any of those unsightly wires on a bike like this – thus, it’s disconnected.

The trainer itself has a stated power accuracy of +/- 2%, a rating slightly higher than the Elite Direto but not as high as the new Elite Drivo.  It’s a little bit odd that this isn’t totally top-end like the Drivo, but I suppose there’s the reality that the industry seems to be all saying behind closed doors the last few days: Does it really matter anymore?  Is anyone actually riding at 24% incline versus 18% incline?  Is anyone actually throwing down 2,500w versus 1,500w?

No matter which rider percentage you sit in, note that you’ll order the Fuoripista much like any other bike: With a specific sizing.  It’ll be sold in sizes small to extra large.  For example, the unit on the show floor felt a bit small for me, especially around my knees close to the front legs.  I presume they brought a more middle of the road sized unit to Eurobike, rather than an extra tall variant.

What’s that? You want to see me riding it? No problem – ask and receive! I dive through all the details in this video, including a listen to exactly how loud it is (or isn’t), plus my impressions as I jump on and pedal away:

I think the biggest takeaway for me was just how stunning it looked in person.  I think I was also impressed that it was like riding a real trainer too, and heck, one that even conforms properly to all the industry standards.  I guess I’m just used to high-end concept things having no real meat to them – but this was an exception.  It’s a legit smart bike that also happens to look incredibly swanky. 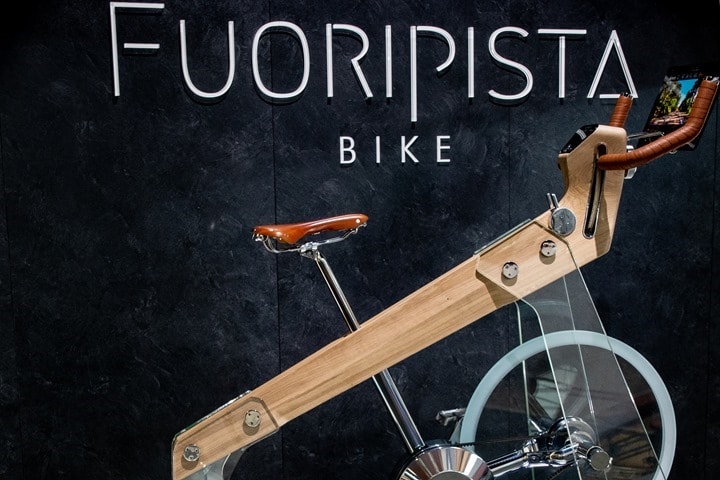 From Elite’s perspective, they know full well they’ll likely only sell a handful of these.  And they’re OK with that.  Their thinking here is somewhat twofold.  First (and probably foremost), it serves as a bit of a conversation starter for the brand.  In other words, a marketing activity.  If they sell some – great.  If not – they’ve undoubtedly got some attention.  But, they’re also genuinely curious about the reaction people are going to have.

They’ve noted that if the reaction comes back as ‘Holy crap, please find a way to make that at a semi-affordable price!’, then they’re saying they’ll seriously consider how to industrialize it and make it viable at a lower price point.  Certainly a large portion of the cost of such an item as displayed today is underwriting the fact that only a handful will sell, as well as simply making it more of the status symbol that most higher-end art is.

But if you start to look at the actual hardware pieces involved here – it’s quite viable to significantly reduce costs if volume is high enough.  And in the case of the industry believing there’s a shift towards putting in nicer indoor bikes that fit better into a living room than just a bike atop a trainer – Elite might actually be onto something, Crazy Horse and all.

No matter the direction they end up in, they say that money can’t buy happiness.  But I sincerely hope that whoever spends the anticipated 12,000-14,000EUR on the Elite Fuoripista indoor smart bike finds that Italian happiness.  And if they don’t, I’ll be happy to take it off your hands for free and be very happy about it.  Just an offer…