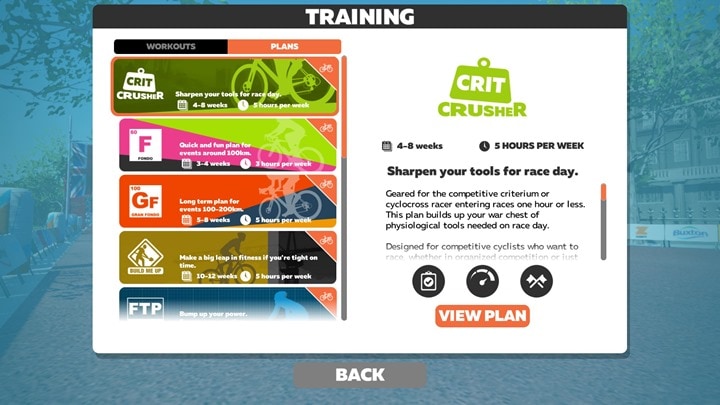 Zwift continues to expand its platform, and this week was no exception when they rolled out interactive structured training plans.  Previously the workouts were mostly just in a giant folder structure of sorts.  That meant you had to pick and choose to try and cobble something together.  This was in contrast to players like TrainerRoad and The Sufferfest, which have fairly advanced training plans and structured workouts that kept you in line.

Zwift’s entrant into the training plan realm sits somewhere in the middle between where they were before with almost-nothing, and where TrainerRoad/Sufferfest are with highly structured and fairly advanced plans.  Still, Zwift is clearly laying the groundwork for deeper plans and more integration with partners, and what the company has put together is actually pretty solid.

I tried it starting a couple weeks back, and now that it’s fully rolled out to folks, I thought I’d take a quick run (or cycle) through it.

You’ll start Zwift like you normally would, pairing up sensors and such.  After that’s done, you’ll tap the ‘Training’ button next to Ride Type, just like you would have to previously have accessed the one-off workouts: 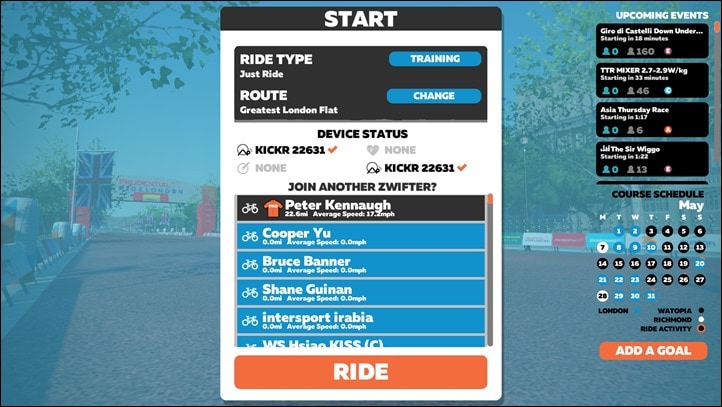 At this point you’ll be on the on the ‘Workouts’ tab, which is where the one-off workouts are. Sure, there are full training plans in there, but it doesn’t track you through those plans.  It’s also where various partnerships show up as well, such as the GCN ones or Hunter’s Challenge from the Peaks Cycling Group. 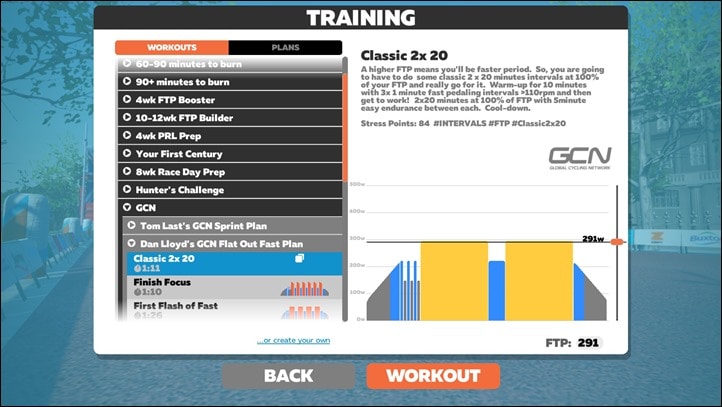 Most notable though (and what is important here) is the FTP value you’ve set in the lower right corner.  You’ll need this value for the training plans piece to be correct, so ensure that it’s at least in the ballpark of reasonableness.

Next, simply click ‘Plans’ in the upper right, which brings you to this colorful spot, the Training Plans landing page: 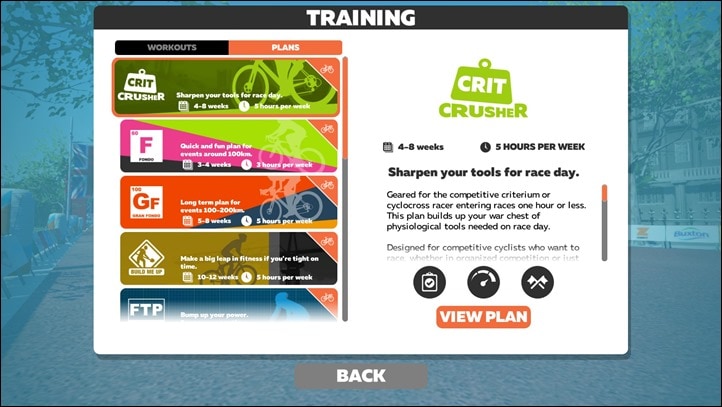 On the left are the various training plans and the time commitments of each of them.  On the right is a bit more detail, along with some icons that depict what specifically the training plan is looking to achieve or include.  For example, in the above image, those three icons mean:

Clipboard: “Full coverage for the competitive Zwifter looking to round out their skills for race day”
Speed gauge: “Run like a kid again, racing across Watopia, until your heart leaps out of your chest. Fast today, faster tomorrow.”
Finish line flags: “This plan incorporates a taper and is designed to help you peak specifically for an event.”

As you can see, some of these icons are useful…and some are a bit gimmicky.  Other icons focus on FTP, endurance base, etc…

In any case, you can view and scroll through the workouts that make up the plan by clicking on ‘View  Plan’: 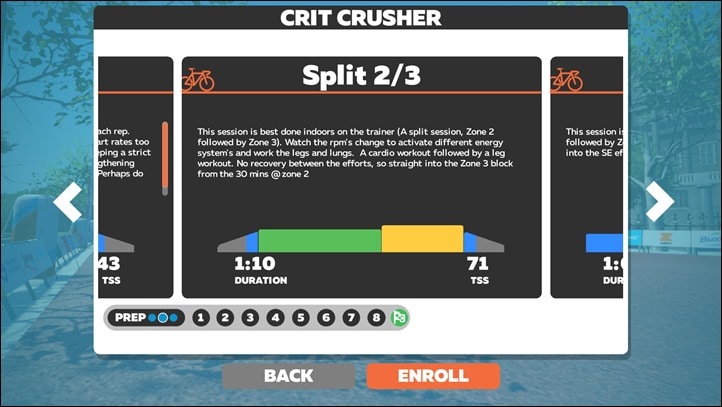 Along the bottom, there are prep workouts, as well as the individual weeks specified (1-8 in this plan’s case).  Some workouts appear to have legit foundations in structured training (e.g. ‘Micro Bursts’ below).  While others seem to have absolutely no thought applied to them.  For example, the one below that basically just says “pedal your bike for an hour” (technically called ‘Zone 1 Ride’).  And then there’s ones in the middle like the “Split 2/3”.

Which isn’t to say every workout needs to be tough, or even super structured; any coach will tell you that.  But the description for the ‘Zone 1 Ride’ is a bit confusing.  Am I working hard or trying to have a baby?  I don’t know what ‘Fast Breathing’ even means on a Zone 1 ride.  After all, Zone 1 by every definition I’ve seen is basically just pedaling along.  Zone 2 is generally considered endurance.  It suggests a wattage of 146w for me for this workout, which wouldn’t generate fast breathing unless I fell off the trainer. 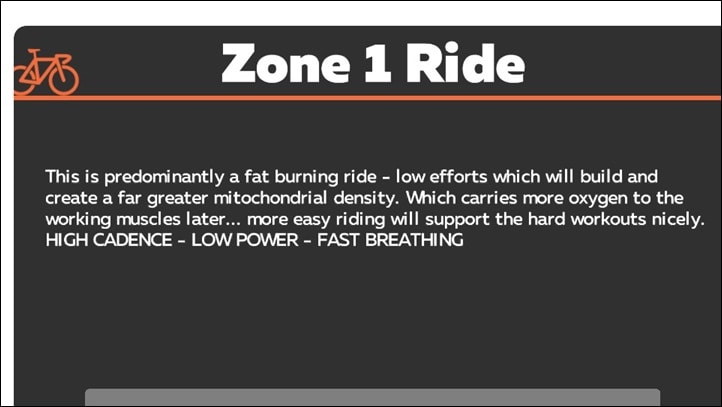 Of course, it may sound like I’m picking on things…but that’s kinda why you come and read here.  To actually look at some of this stuff with a critical eye.  Again, there’s some very legit training workouts in these libraries, but there’s also a healthy dose where I feel like they’re just phoning it in.

In any event, once you’ve selected a plan to follow, go ahead and tap ‘Enroll’.  You can then shift the end-date of the plan, which in the case of some plans will extend out the full duration of weeks.  Or, you can shorten it with some plans as well.  Ideally you’d be aligning this to a specific race day. 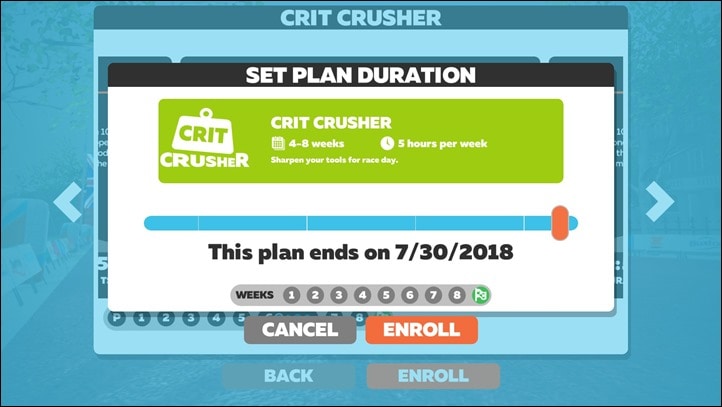 Next is where things get interesting.  You’re now presented with the available workouts for your plan.  You’ll notice that initially you’re within the ‘Prep’ phase (seen at the bottom).  Within that phase you’ve got two workouts you can choose from immediately (and one more I’ll talk about in a second). 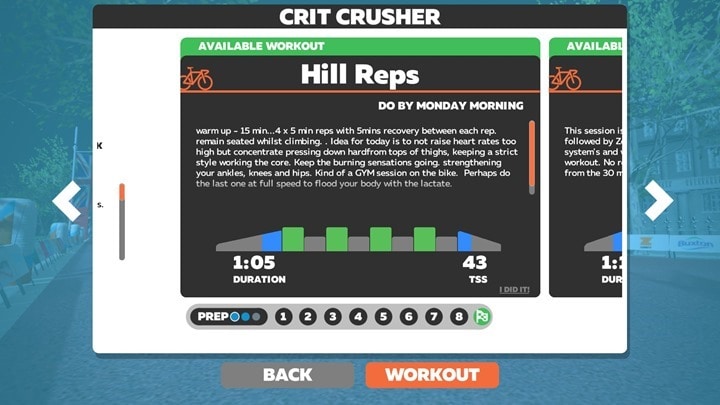 The idea that Zwift is focusing on here is essentially that you can complete the workouts on whichever days you want within that time period (a week), as long as you get them done.  They aren’t locked to a specific day, catering to the idea that they don’t want folks giving up on training plans simply because a last-minute work day-trip got in the way, or the kids were sick and you couldn’t do a workout that night.

I like this quite a bit – and I think it’s critical to not overthinking things here.  For the vast majority of athletes, having something – anything at all – that’s semi-structured will reap significant athletic improvements. So whether it’s done on Tuesday morning or Thursday morning it’s really going to be of little consequence in this style of training plan.

Now I mentioned above that there were three workouts in the prep phase, but only two you could do immediately.  That’s because the 3rd workout doesn’t unlock for another 39 hours.  And the same is true of the initial ‘Week 1’ workouts. 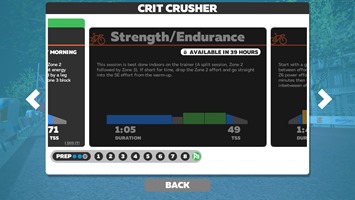 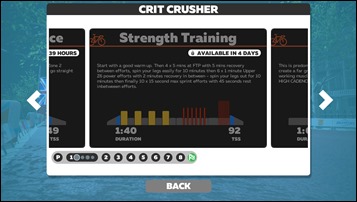 As you shift through the workouts listed, it’ll specify how many days till you can unlock it.

But what if life changed and you couldn’t get to a trainer that day.  For example, that exciting hour-long Zone 1 workout could easily be done outdoors.  For that, you can simply tap the ‘I did it’ text in the lower right corner (see it a few screenshots above).  Once that’s done, it shows as completed and you earn a squirrel on a bike.  It doesn’t, however, unlock the following workouts until the timer is completed. 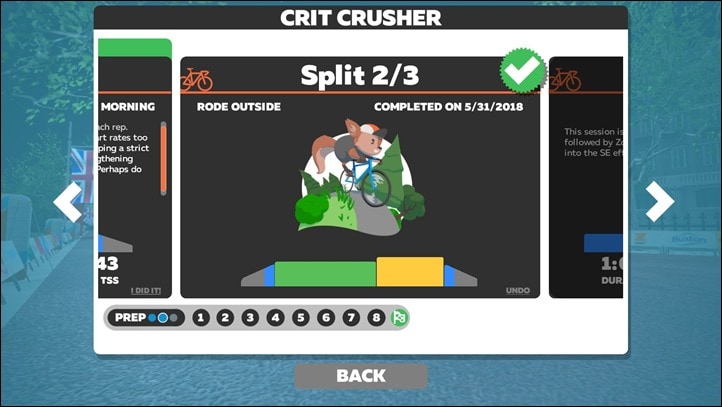 Now, the actual completion of one of these workouts is really no different than any other workout you’ve done on Zwift previously.  The structured workouts engine is all the same there best I can tell.  I won’t re-hash that, since I’ve already discussed it previously (wow, it’s been almost three years since that was introduced?!). Still, here’s a screenshot of me doing one of the workouts: 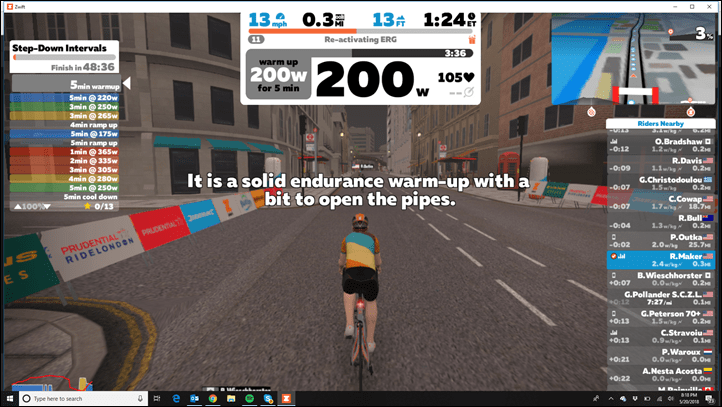 If you’ve got the mobile app, you’ll also see your scheduled workouts listed there too, and you can, of course, get more detail once in the workout itself too:

The next time you sign-in to Zwift, it’ll automatically show you one of your upcoming scheduled workouts to complete, and how long you have to complete it.  This is shown immediately after the pairing screen – before you’d normally select whether to free-ride or not.  Essentially, Zwift is (rightly) guilt-tripping you into doing the workout, before you get distracted trying to hammerfest in regular mode: 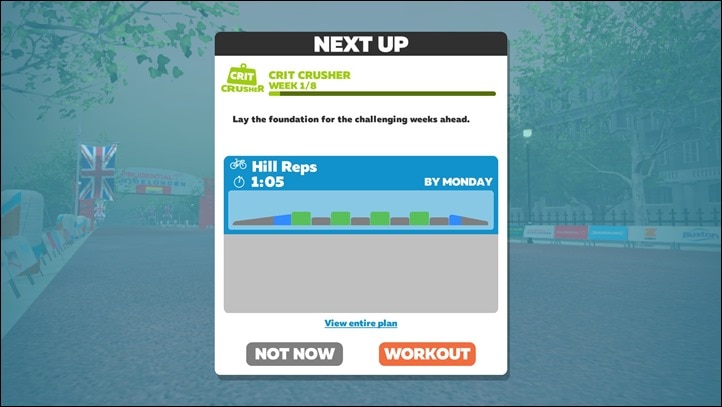 All in all, everything here works fairly well.  Note, there are a few minor things to keep in mind.  First is that you can only be on one training plan at once.  This is logical sounding at first, because obviously two training plans is double-dipping.  And that’s only allowed for ketchup and fries. 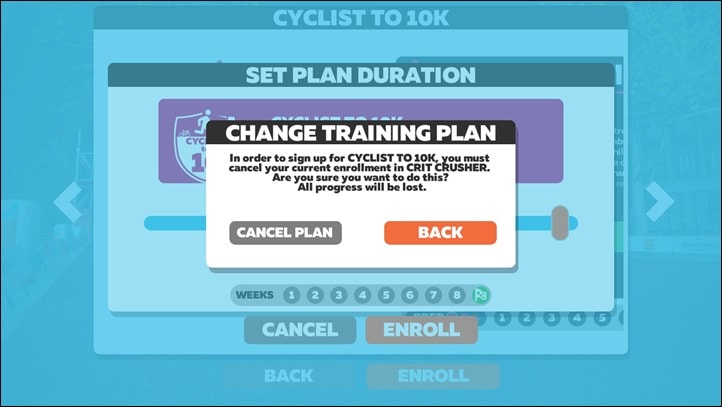 On the flip side, the bright side is that Zwift does indeed have three running plans to choose from. 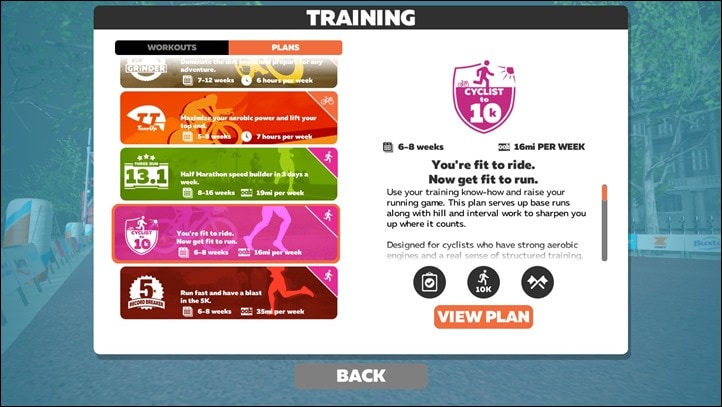 Ok, with that, I think I’ve covered everything there possibly is to cover from a photographic and textual standpoint.  However, Shane Miller also put together a video on it – in the event you’re more of a moving picture kinda person:

Overall I think this is definitely the right direction for Zwift, and I’m actually fairly impressed with their execution on it.  I had somewhat expected them to just slightly elevate the existing structured workouts piece into a standardized calendar, but they did one better in making the training plan platform more flexible and easily able to accommodate the Jello-like reality that is most of our real-life weekly schedules.

It’s also clear from the user interface elements that they’ve structured the training plans to easily allow 3rd parties to plug-in.  Certainly I expect we’ll see more branded partnerships in this area, and hopefully also the ability for teams and coaches to plug-into this too for their own athletes.  That would be cool.

As noted above there are still a few kinks in it, one being the inability to sign-up for multiple plans, or that there’s nothing directly focused on the triathlete (despite having both running and cycling).  I suspect there are far more triathletes using Zwift for running than there are straight runners that don’t otherwise cycle on Zwift. Just a guess.  Also, the fact that everything here is dependent on FTP, yet FTP is stashed away on a different page and it’s not suggested anywhere to the user double-check that value is still accurate is odd.

Of course, it’s clear that this isn’t likely targeted at the super-serious athlete, since in most cases they probably already have a coach or established training plan.  This is targeted at the core of Zwift’s base – which is getting folks onto the bike that otherwise might have skipped out on winter training due to weather.  And in that sense, I think these plans nail it and their target audience perfectly.