Back fresh from a week in the states at Sea Otter, I was ready to get back to enjoying all Amsterdam has to offer, and no better time to do that than this past weekend.

Friday was King’s Day in the Netherlands, which is cause for significant celebrations.  Most notably, there’s lots of orange involved. Obviously, I took part in that: 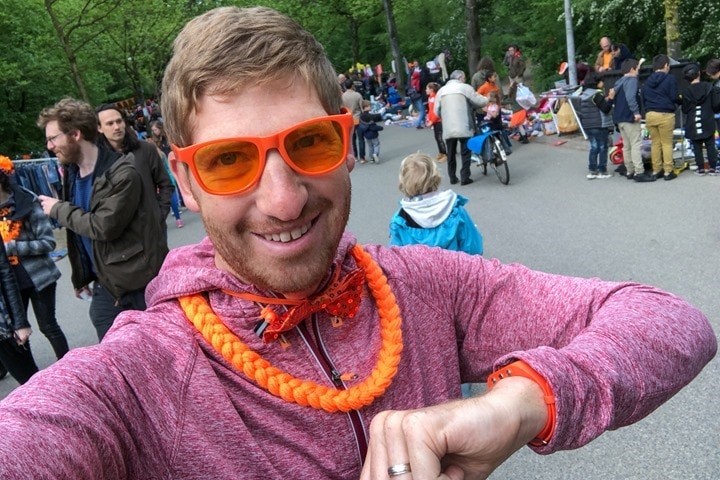 There’s numerous things going on throughout the city, including the canals being packed full of partying boats, music festivals, and sidewalk sales by ordinary people/families (not so much retailers).  In our case, with the two kids, we focused on Vondelpark, which is set aside for families/kids to sell their wares along the meandering path.  We’re talking many kilometers of packed sidewalks with mostly kids’ things for sale (and some household items). 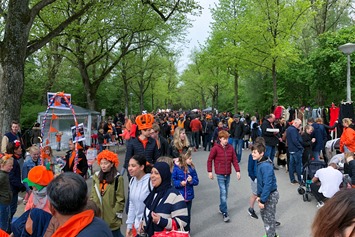 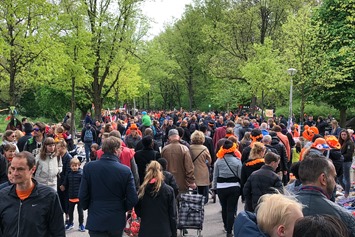 The vast majority of things cost only a Euro or two. We got well cared for toys that would have been 20-40EUR for just a Euro.  Perhaps that’s because for the most part the kids themselves do the bargaining, and somehow everything ends up being 1 Euro when a kid is involved in such negotiations. 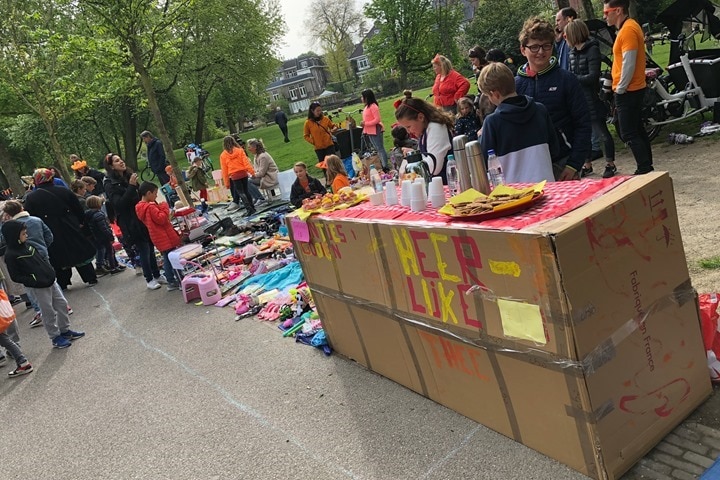 Some entrepreneurial kids even had an egg-throwing stand setup. You paid them a Euro or so, and you could throw an egg at them.  However, a TV personality came around and somehow was convinced to stand behind the board. Given his hairdo, that was definitely a mistake.

After an hour or two of meandering, I ended up retreating back to the house with the kids so they could nap, and then The Girl continued on for some hours picking up good deals.  The whole thing was just super cool though with everyone so friendly.  Love it!

As I continue my search for legit office space, I’ve turned the spare bedroom into a temporary office.  This bedroom isn’t much bigger than an American bathroom (not of the master variety). My bike basically can fit, and that’s the max length/width of it.

I pedaled over to the hardware store to buy a board that I could use as a desk.  I then bought two sawhorses for $5 each.  All of which I carried home via my bike: 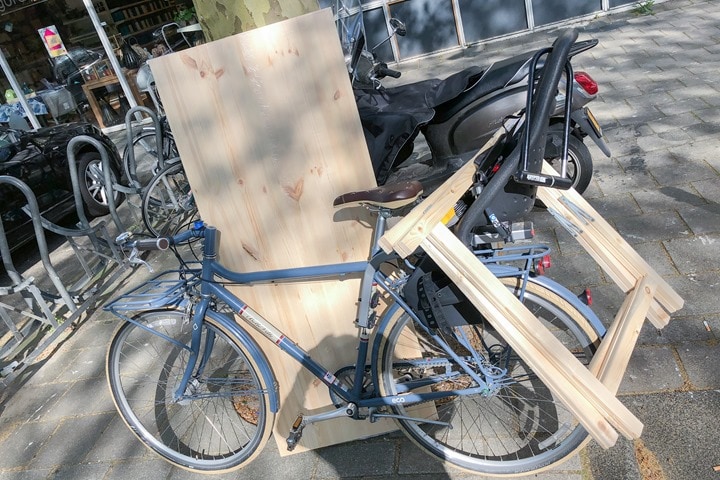 Once at home I simply cut down the sawhorse to fit better, and then sanded things up.  Nothing fancy. Oh, and then I drilled a hole for the Ikea wireless charging pod that I had bought in Australia. 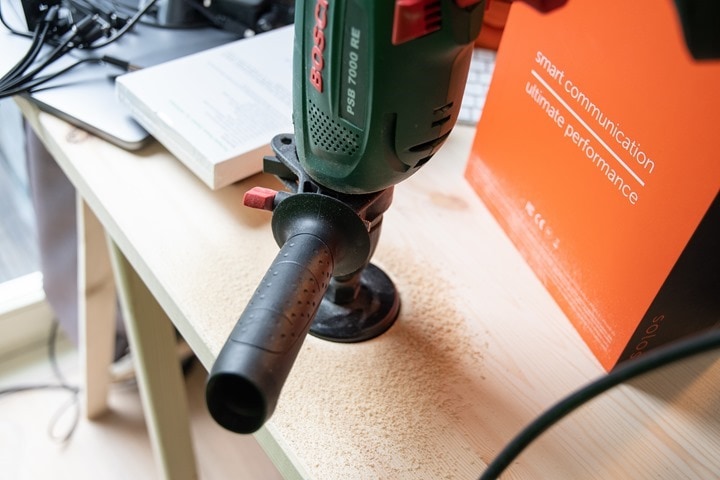 Funny story: It was the cheapest wireless charging mat I could find there, after the one that I brought with me didn’t charge the Stryd pod I had (otherwise, this cheap mat I use is awesome).  I talked with Stryd about it, and turns out different charging mats have different coil sizes, most of which are designed for smartphones and not tiny running pods.  So I threw a Hail Mary and hoped the Ikea one would work.  And sure enough, it did perfectly.  Thus how I have an extra charger. 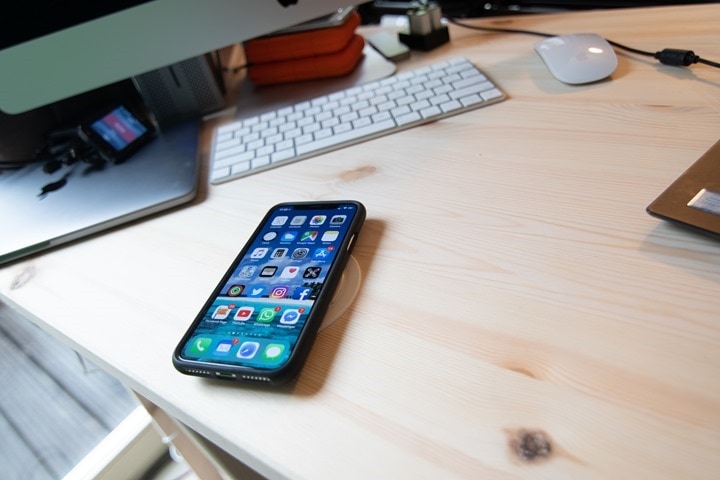 Plus, it’s even got some sorta of popping mechanism that gets you one extra USB port (while still charging the phone). Personally, I think only one port is kinda lame, two should have been there.  But I guess I’m not an Ikea engineer. 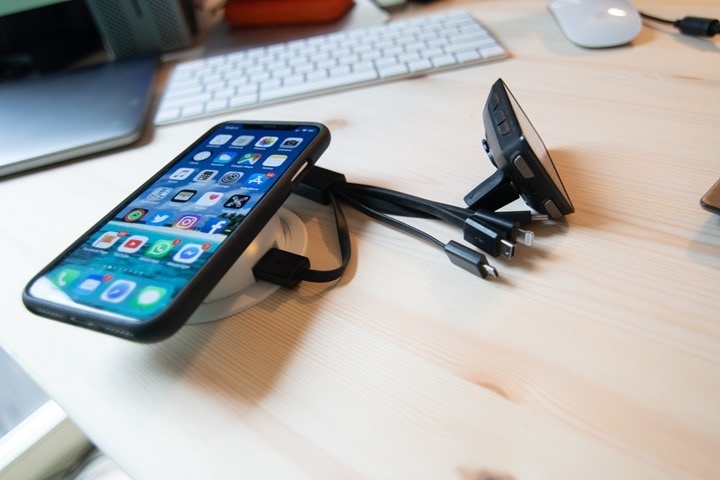 Oh, as for the green screen in the background, someday I’ll start using it. Probably today actually. I had long wanted an excuse to buy one, and then I saw Shane’s video on it a while back…and his frequent use of it lately has pushed me over the edge. 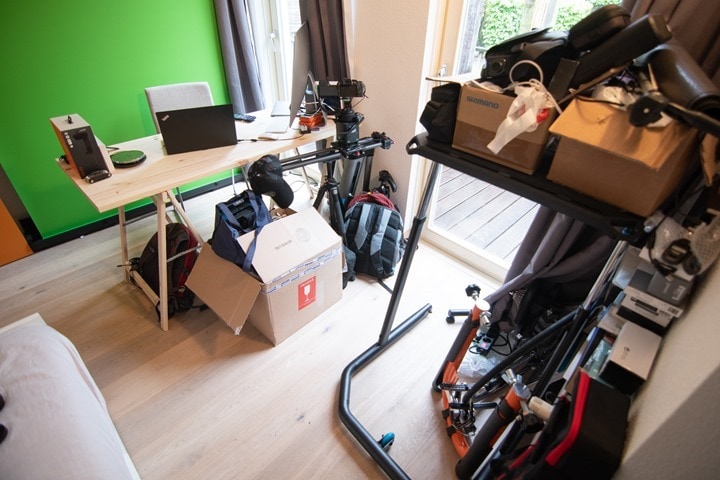 Hopefully I’ll find an office soon.  For context at how many places I’ve looked at or called, here’s the map of business/retail spots on the listings site.  Everything in blue I’ve either visited, called, or at least looked at.  The vast majority don’t work because they are either already taken or missing the ability to have/add showers, or are simply too small.  But most are simply already gone. 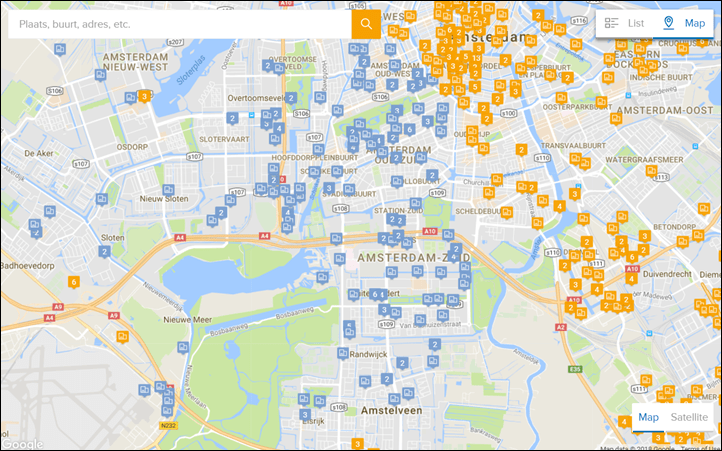 And thus the search continues…

Someday, we’ll stop going to Ikea. But today, Saturday, was not that day. This time we needed some random kids’ things, a few cheap shelves, and a few picture frames, and some closet parts.  All of which are best obtained from Ikea.  The kids’ things included another high chair, and a large toy chest/drawer.  The toy situation has gotten out of control lately, and somehow we didn’t have a toy box until now. 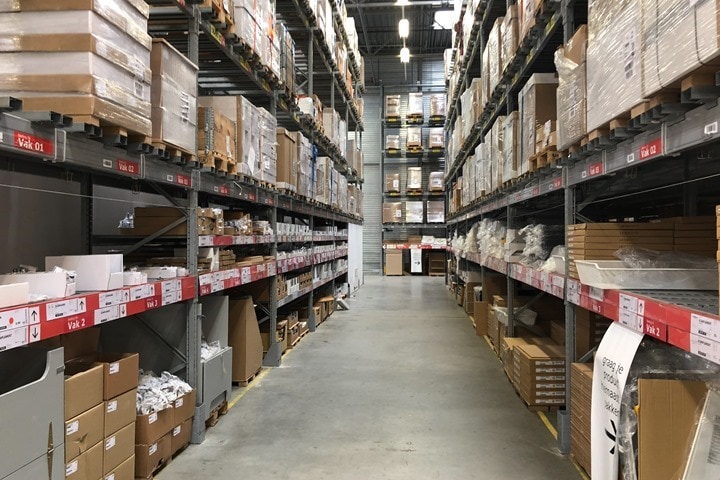 I was more impressed that we got it all home in a single Uber.  We had considered borrowing a cargo bike from Ikea to take it home, but the only problem there is then I’d have to take the bike back out to Ikea (a solid 45-minute pedal)…followed by then getting myself back home.  So basically, two extra ‘legs’ for no particular purpose.

On the bright side, at least they have 50 cent ice cream cones at Ikea. The Peanut most definitely approved of that part of the experience.

4) A Wet Ride Through the Farms

I headed out Sunday morning for about a 60KM ride through the middle of farms.  I love how close we are to this area, and how easy it is to get out along the river and just riding for endless miles on quiet empty roads. 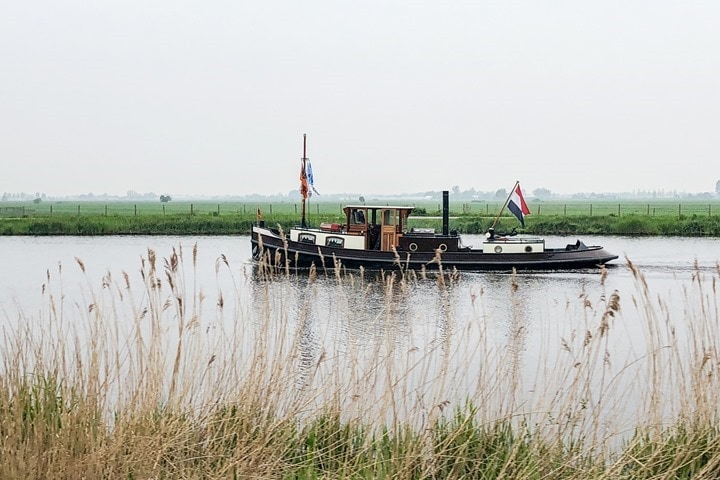 As always I was testing a bunch of stuff, most of it for another day.  And most of it worked well, so that was good.

The less good part? The rain.  So much rain. 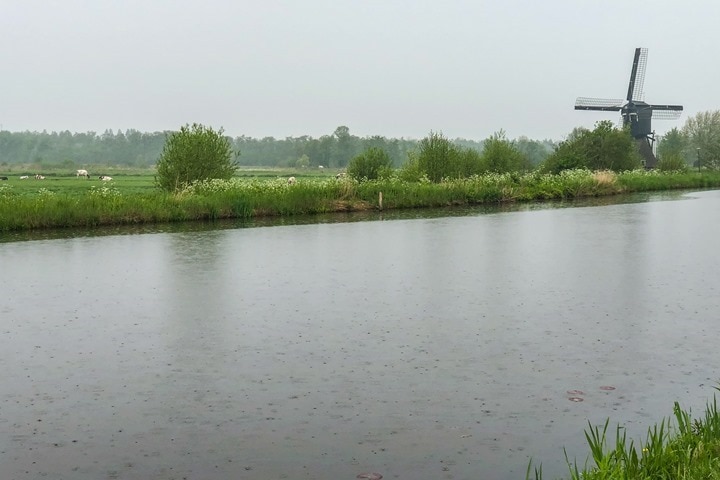 Though you know what? It doesn’t seem to bother me here much. I’m not sure why. Perhaps it’s because I just expect it to be wet and windy.  Or perhaps that on flat country roads for miles with virtually no cars, I don’t worry about all the usual wet road pitfalls. The roads aren’t oily, so the dirt just easily washes away.  And there aren’t cars around much, so you don’t have to worry about a car not seeing you in the rain.  You rarely have to stop, so you don’t have to worry about poor braking performance.  And turns? Also, rarely a thing – so again, no concerns about sliding on a corner. 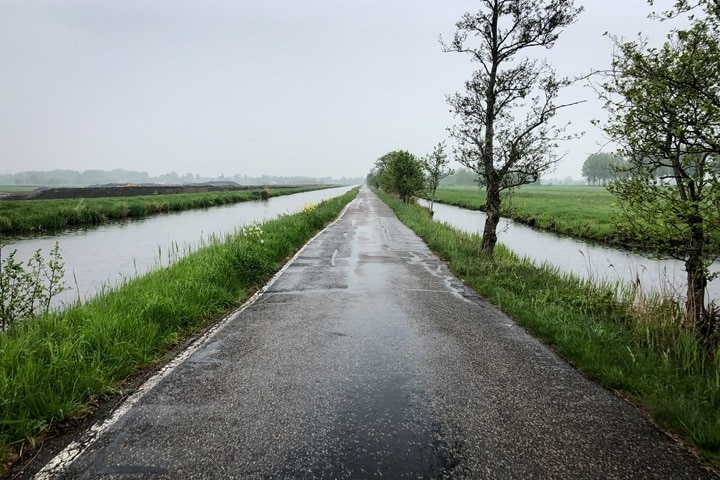 Plus, there’s endless windmills and waterways to look at. And lots of sheep. 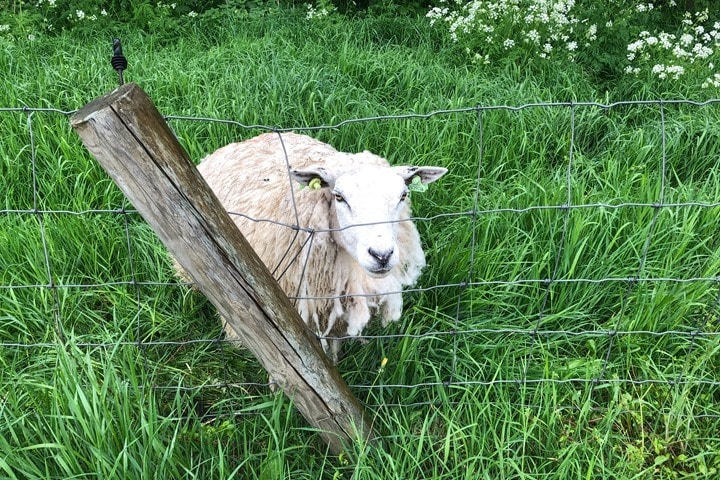 For those following me on Strava, you’ll have to get used to windmill pics. It’s either that or canal pics from here on out.

The Peanut loves the bicycle.  So much so that she’s happy to go for a bike ride any time of day…or night.  And sometimes when she’s just a little bit crazy, one of the best solutions is strapping her on the back of the bike.

Thus the solution Sunday afternoon when she was continually trying to be a bit too loving to her sister, neglecting to realize that her idea of a gentle hug isn’t exactly the same as her 5-month-old sister’s idea of one.

So, off for a bike ride we went…and there was no more logical place than the donut shop. It’s about a 10-12 minute ride at top speed…or about 15-20 if you purposefully take your time. 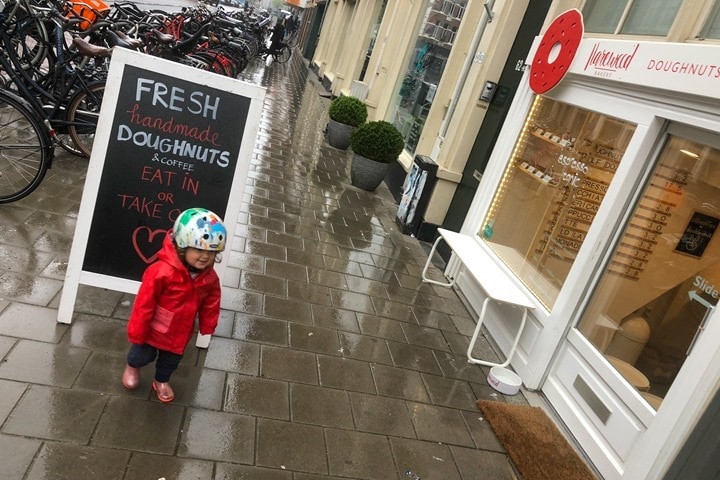 Since coming back from Australia, I’ve gotten constant use of the Quad Lock mounts that I bought, even more so than there on my road bike. It’s just perfect for this sort of in-city thing.  Pop on the phone mount and then off you go.  I’ve gotta dig out the rain poncho for it though, which is in a box…somewhere. 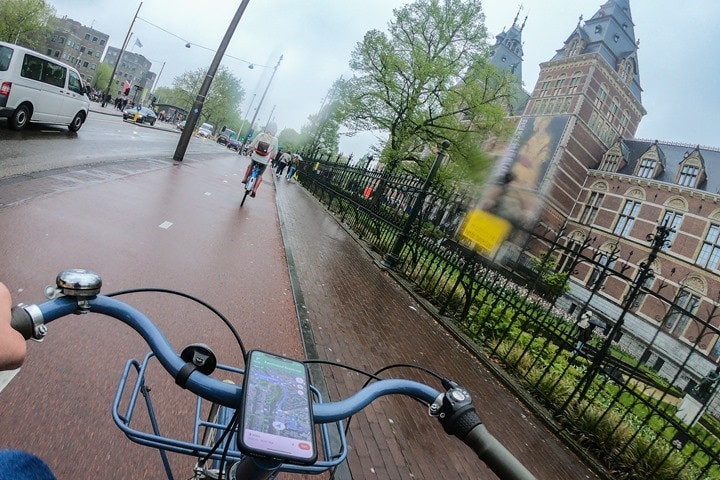 Now The Girl wants one too for her bike, except, she doesn’t want the black color of the case.  She wants, well, any other color.  Unfortunately, Quad Lock only makes the case in a single color…black.  Perhaps a can of spray paint can resolve that.  Though, I suppose that’s what they have the ‘Universal Fit’ attachment thingy for.

As for the donuts, don’t worry, they were great as always. 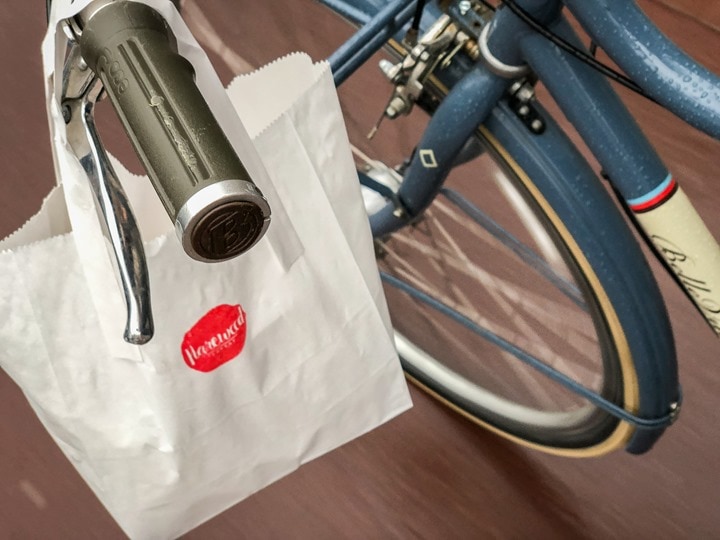 Though ironically, The Peanut didn’t get one.  The last thing I needed was for her to have more crazy energy.  She wasn’t any wiser though, as she was too short to see over the counter, and had no idea what was in the bag.  She was just happy to be riding.

Give her a bike and she’s happy.

With that, thanks for reading and have a great week ahead!