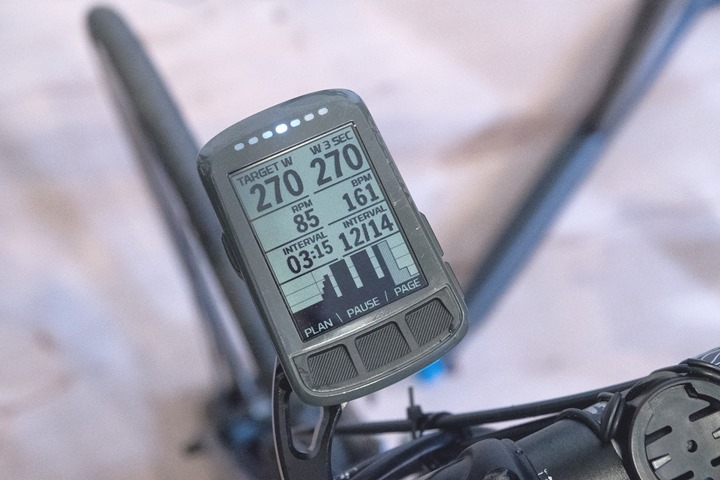 Today Wahoo checked off another box on the ELEMNT & ELEMNT BOLT series, by adding in support for executing structured pre-programmed workouts on both cycling computers.  In addition, they also added in support for controlling 3rd party trainers via ANT+ FE-C – meaning they can finally control non-Wahoo trainers.

Both items were seen as somewhat of the ‘final frontier’ of Wahoo being more competitive with Gamin’s Edge cycling computers, in particular the structured workout piece.  I’ve been toying with both for a bit, and here’s a run-through on how they work.

This addition continues what has been a pretty exciting summer for not just the Wahoo ELEMNT lineup, but consumers as Garmin and Wahoo battle almost weekly in the game of the best all-around bike computer. 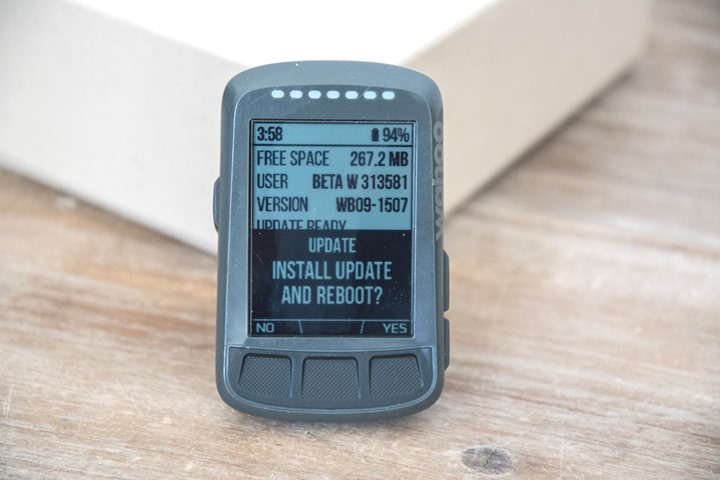 (Note: The ability to import .FIT/.MRC/.ERG files was delayed from today’s release…it should re-appear shortly in an update.)

For those importing from TrainingPeaks or Today’s Plan, it’ll automatically download these workouts to your ELEMNT/BOLT assuming you’ve linked those accounts within the Wahoo Companion App: 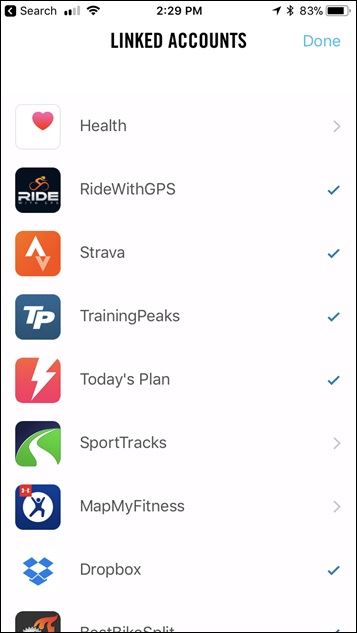 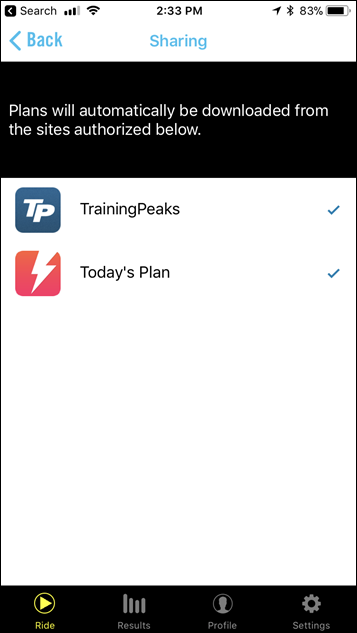 In addition, you’ll find five default starter workouts that Wahoo has loaded.  The first two are FTP tests (8 minute and 20 minute), and the next three are from Team Sky (of which Wahoo is the official trainer partner).  These include a sprinting, climbing, and mixed session workout. 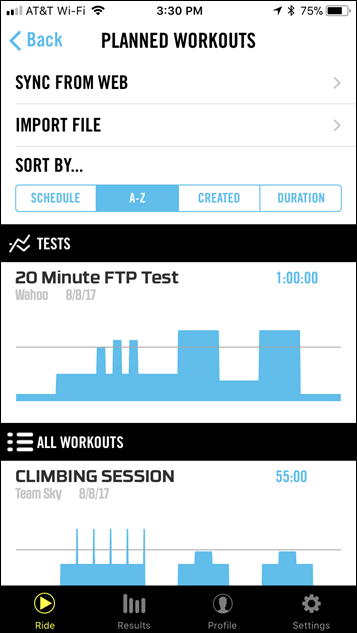 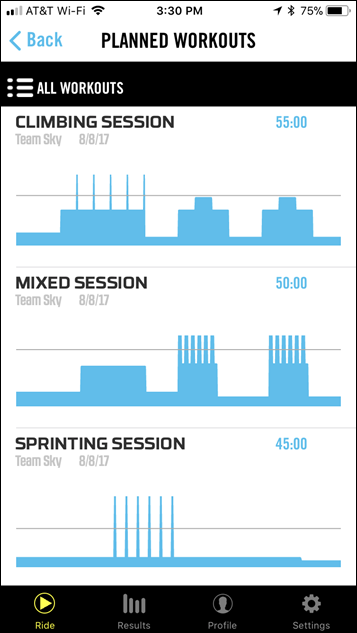 To start poking at things, I decided to create a workout in TrainingPeaks, I set specific targets, including wattage targets (based on FTP set in TrainingPeaks), using specified durations.  There’s no method/way to set RPM targets (which Wahoo does support):

From there I returned to the BOLT, and then synced it as normal.  Within a few seconds the workout showed up: 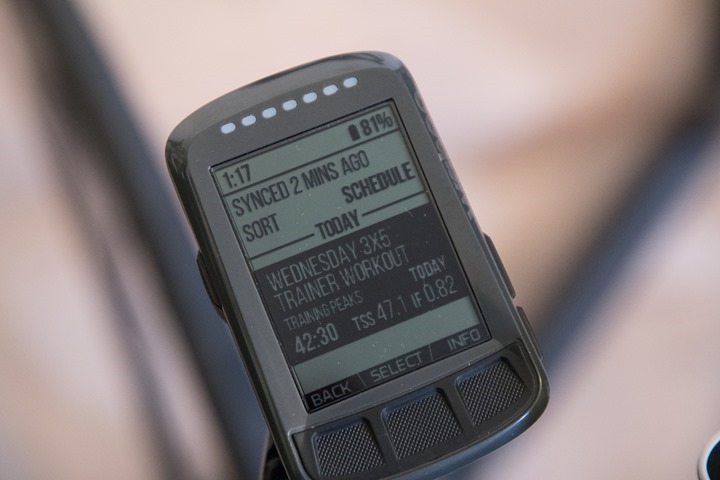 Now one thing that’s cool here is that the unit will sync 7 days worth of workouts every time it talks to the interwebs.  So the next time you power on your unit it’ll default to showing today’s scheduled workout as the starting screen: 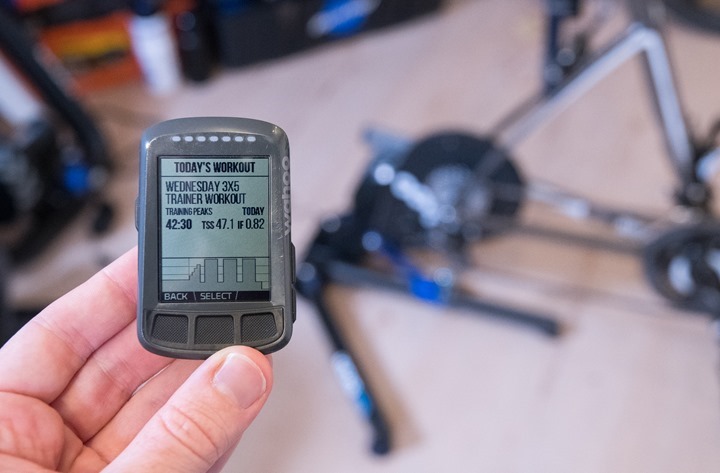 You can also just select it from within the settings menu, and list the sync’d workouts to the unit (including the ones from Team Sky). 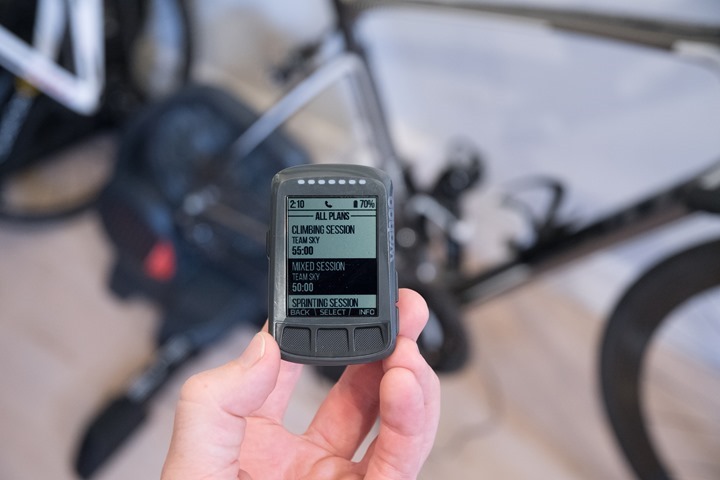 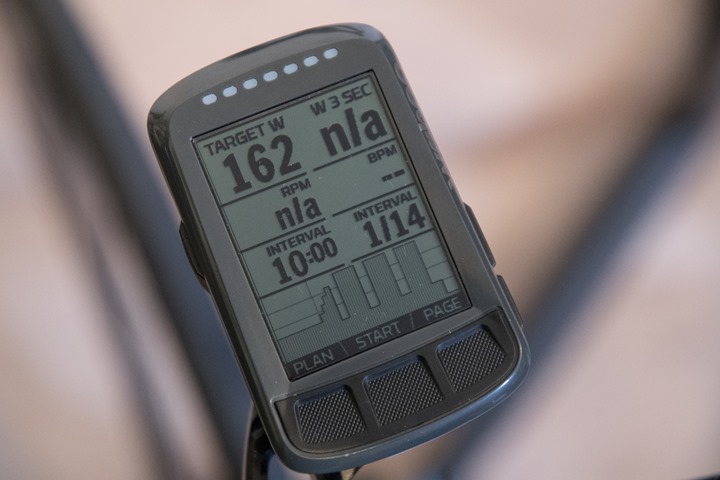 With that set, I launched the workout, which was set to then control the Wahoo KICKR trainer I was on.  After pressing start, it immediately set the wattage point as per the workout and off I went.  You can see the prescribed wattage target listed up top: 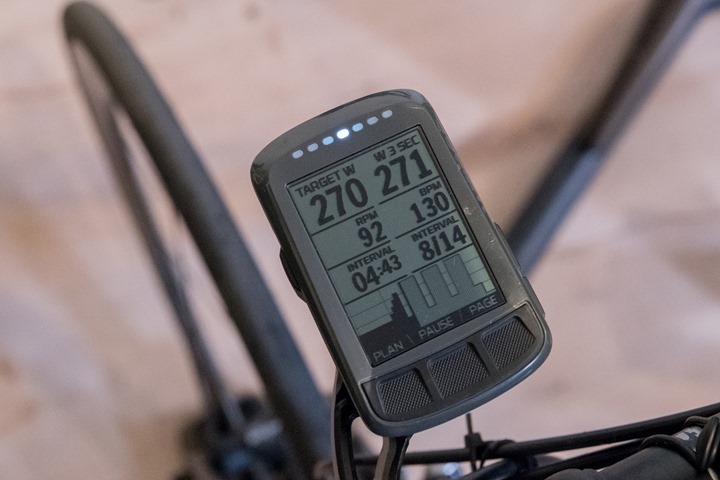 And then off to the side you also see my actual wattage.  With the KICKR controlling things, this was within a watt or two most times.  But of course if you’re out on the road (outside), or not using an electronic trainer, then you’re aiming to hit that target.

Again – to reiterate this point: You can use the workout functionality outdoors or indoors, no need for a fancy trainer.

The rest of the workout was pretty much as you expect, in my case with the trainer controlling wattage I was along for the ride.  You can adjust intensity using the scaling factor as well: 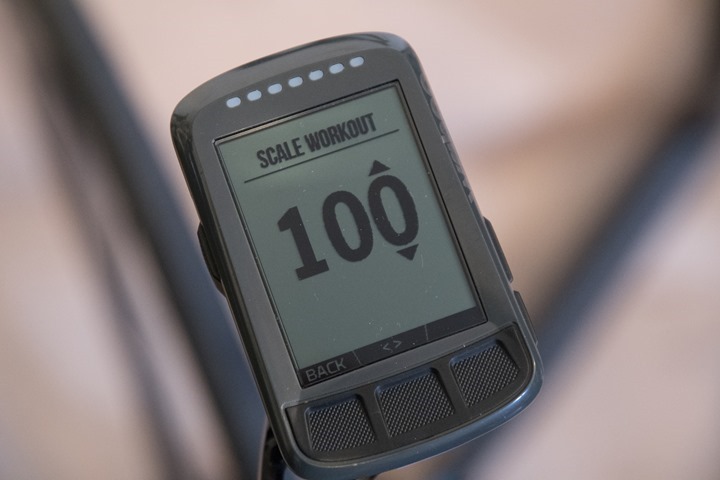 In addition, you can also fast forward and rewind through the workout; useful if you need to add extra intervals, or if outdoors and something goes askew and you need to restart an interval.  An example being that somehow road-life got in the way and 15 seconds into a 5 minute interval you hit a stop-light.  This would allow you to reset the interval and start again.  Brilliant – something I’ve not seen on any other head unit.  It’s the two little << >> buttons. 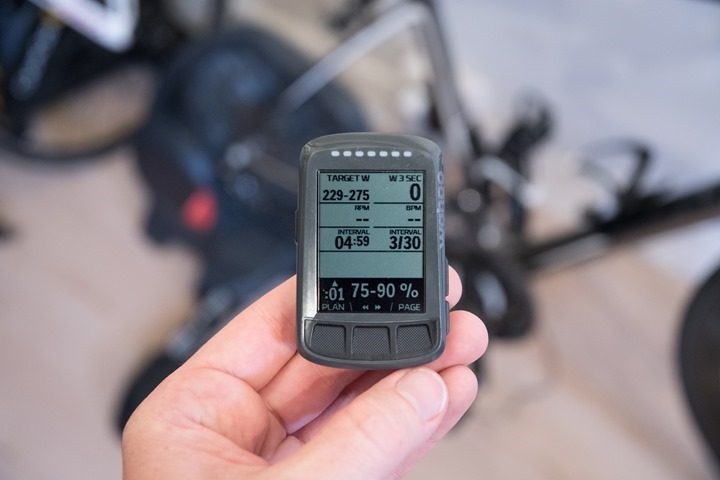 Then from there you can select which part of the workout: 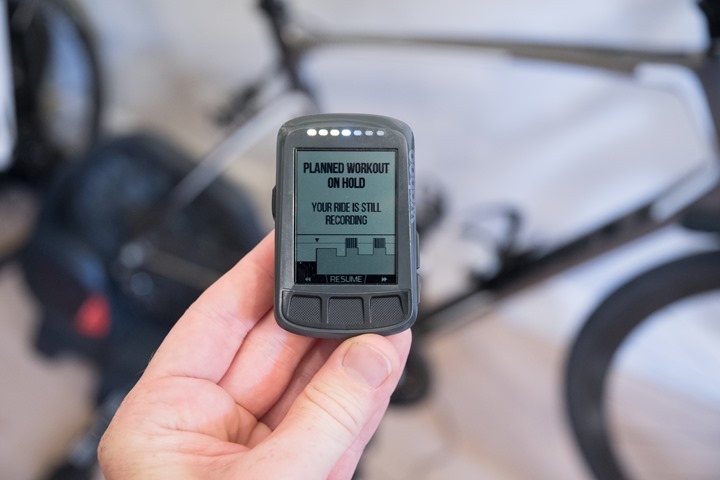 The unit will show you descriptive notes from the workout program as you count-down the last 5 seconds till the next interval.  What’s cool is that this count-down banner (shown below) will appear on any/all screens, so you don’t have to be on just the workout screen.  It’ll also chirp as well. 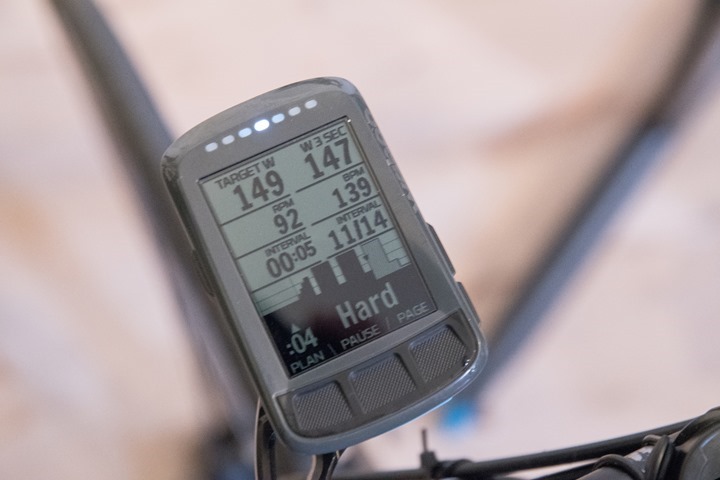 You’ll also notice up top that the LED’s are illuminated, showing that I’m right on-target.  If I’m low or high, it’ll reflect that in the LED panel.

Once everything is done the timer will continue until you stop the unit.  This is useful if you’re doing the workout outdoors at perhaps a protected/secluded area, and then upon completion you want to capture the rest of the ride back home (for me that might be a 20-minute ride from the place I do protected loops).

And just like any other workout it’ll upload back to your platforms of choice, be it TrainingPeaks or Today’s Plan, or others like Strava and SportTracks:

(For those curious what happened at the 21 minute marker…I stupidly dropped the BOLT trying to take a photo onto my cycling shoe and then kicked it across the room…and had to go fetch it.  Welcome to the real life of DCR.)

Next up we’ve got ANT+ FE-C control.  FE-C has been out for about two years now and is commonplace on every trainer in the market (except one).  It allows app software developers (like Zwift and TrainerRoad, but more importantly the dozens of smaller ones) to easily support new trainers without having to do anything special.  More recently there’s also a new Bluetooth Smart variant of this standard called FTMS (only Elite, TrainerRoad, and Kinomap support it today).

Up until now, Wahoo’s ELEMNT units only could control Wahoo’s own trainers, and did so using Wahoo’s private control method.  However, if you wanted to control another company’s trainer using your Wahoo ELEMNT/BOLT, you were out of luck.  Whereas Garmin allows you to control any trainer that supported FE-C, and oddly enough, that does include Wahoo’s own trainers, which support FE-C (Wahoo’s trainers have for a year or so, whereas it’s the Wahoo head units that didn’t).

In any event, with that backstory out of the way, they now support FE-C trainers.  So simply put: The Wahoo ELEMNT series can control a non-Wahoo trainer.

To validate that, I grabbed the Elite Direto trainer, which is ANT+ FE-C compatible and went to search for it after pressing ‘Add Sensor’: 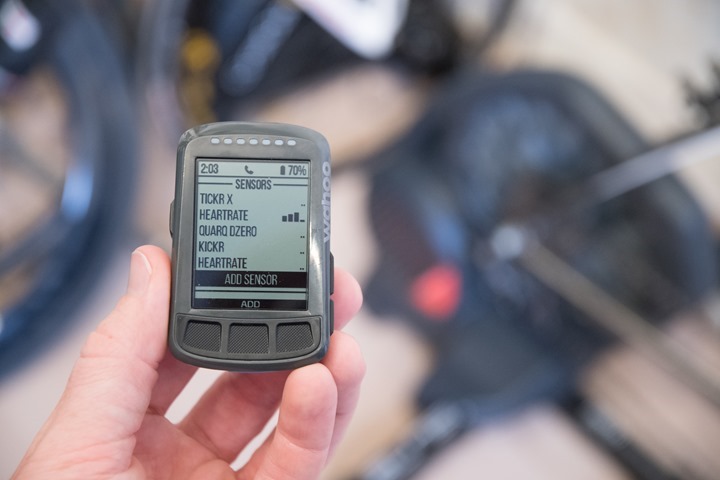 Sure enough, it finds it without issue as an ANT+ FE-C trainer. 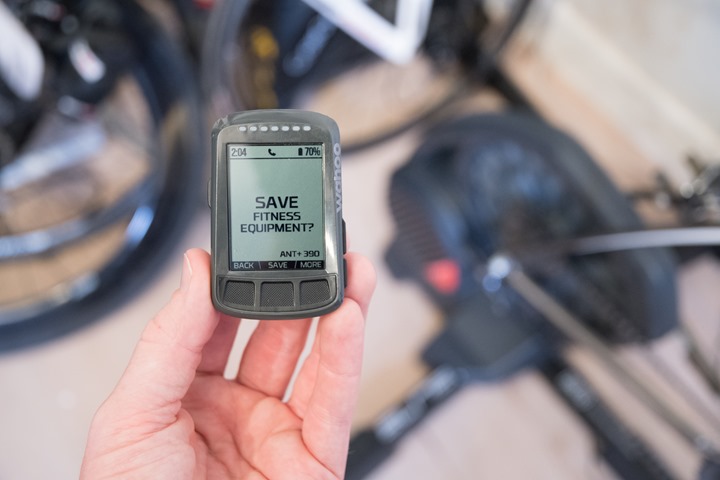 What about spin-down or calibration?  Well, it supports it – but I couldn’t get it to successfully trigger.  This doesn’t surprise me though, as I’ve had problems with other head units and getting it to trigger a calibration successfully on the Elite Direto via FE-C (other protocols are fine).  I’ve long found that FE-C calibrations across the board are finicky. 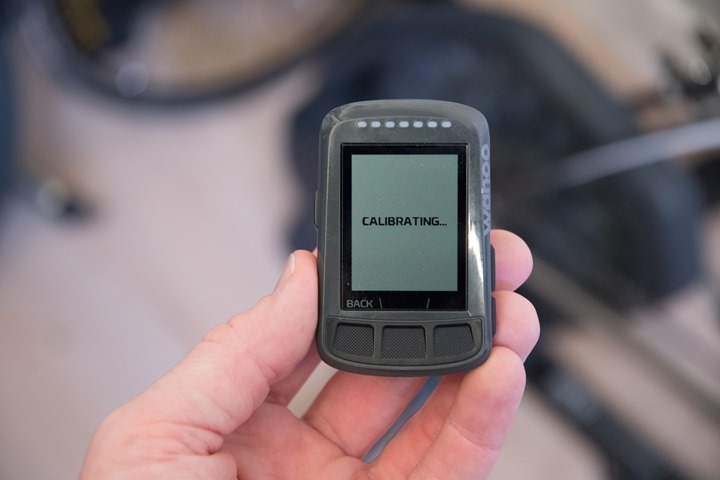 From there I grabbed one of the workouts from above to start off a short test ride to see how it’d respond.

No issues.  It changed the intensity as I went through the workout (I just tested different sections), and all was well.

I suspect that Wahoo will probably have a slight learning curve with 3rd party trainers over the coming weeks, as each trainer does FE-C a slight bit different (they noted they’ve already had to fix a few of them to work with the FE-C control.

It’s great to see Wahoo check off these two items, especially the workout control piece.  And in the case of workout control, I’d argue the ability to go forwards/backwards through an interval, as well as to be able to sync workouts from Today’s Plan and TrainingPeaks natively (with what is clearly a placeholder for other services) makes it once again a better implementation than what Garmin has done in these respects.

Which isn’t to say Garmin doesn’t do other things better (they do), but the pattern we’re seeing here is that with Wahoo adding these new features (I.e. Strava Live Segments, Live Tracking, and now workout support), they’re generally doing so in a more clever way – nuanced details that simply make that feature better.