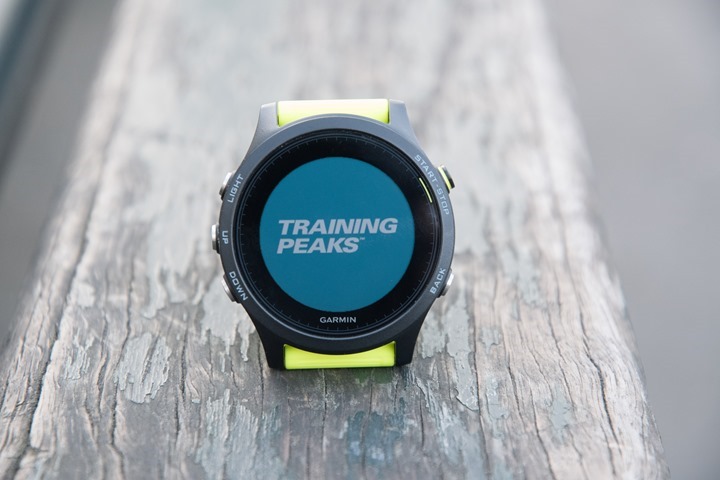 Tied into yesterday’s Garmin FR935 release was TrainingPeaks announcing rollout of their new dedicated Connect IQ apps.  This new integration allows you to sync structured workouts that you or your coach creates on the TrainingPeaks platform.  The workout for the day will then be available for you to pull/load directly from your watch – without having to manually re-create it on Garmin Connect or do any other funkiness.

I’ve played with it a bit over the last two weeks, and it’s both easy to use…and impressively simple.  As I’ll explain – this isn’t actually a super complex app.  Rather, it’s just the messenger. 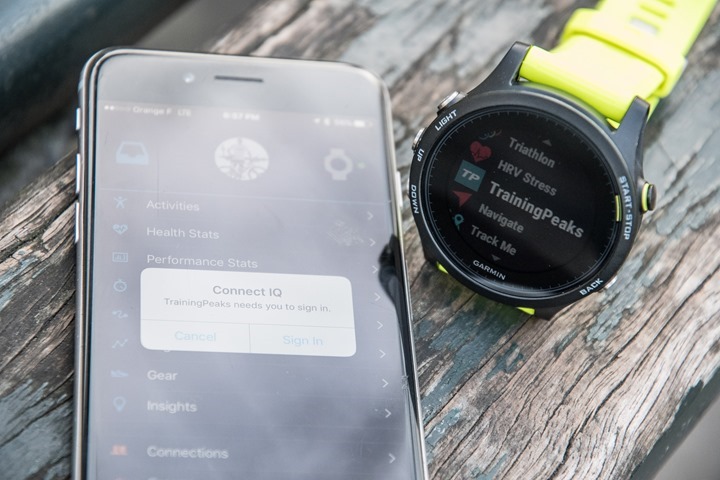 First up is that you’ll need a TrainingPeaks account.  I’m going to presume that since you’re interested in the functionality, you already have such an account.  Once that’s setup, you’ll need to get the TrainingPeaks Connect IQ app on your watch.  That app is coming pre-loaded with the Garmin FR935, but it’s also available for the following devices:

Notably absent from that list is the Fenix 3/3HR as well as the FR920XT.  These units aren’t getting the app at this time since they lack Connect IQ 2.2 (announced last fall).  So that’s definitely a bummer there.

Note that you can search the Connect IQ store for the app, or just use this link.  Either way, go forth and get it installed before moving onto the next step.

Once you’ve got the app installed on your device and open it up for the first time (with your phone handy), it’ll ask you to authorize with TrainingPeaks.  This enables Connect IQ apps to use the Bluetooth Smart connectivity to Garmin Connect Mobile to in turn get content from their respective sites/databases/platforms.  So in this case, it has to do a one-time authorization of your TrainingPeaks account.  Basically, just like you’d authorize Facebook or any other service on the interwebs. 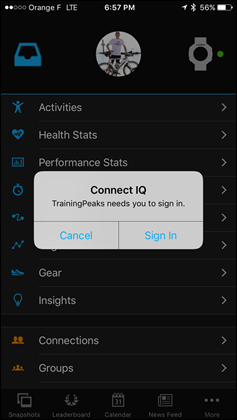 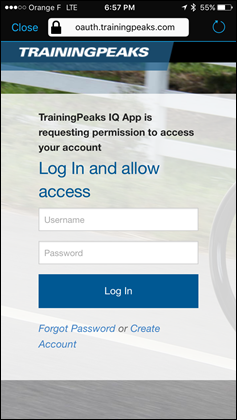 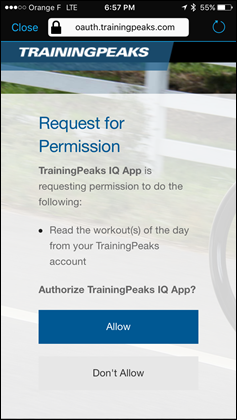 With that all ready to go, you’ll need to have a workout created on your TrainingPeaks calendar using the Workout Builder (generic instructions to simply run 60 minutes won’t work).  The point of the app is to basically allow you to sync that day’s workout from your calendar to your watch.  That’s it.  And more specifically, a structured workout with all the sections.  So, I went ahead and created one within TrainingPeaks:

You can see above that I created various sections with targets, in this case specific pace targets, as well as durations for each segment.  I can easily create repeating chunks as well.  Overall, it’s pretty straightforward.  It doesn’t quite have the same flexibility as the Garmin Connect workout creator in terms of specific target types you can set, but it’s pretty good and covers most people’s scenarios.

Once that’s done, you’re ready to grab your watch, which we’ll talk about in the next section.

(Minor note: It sounds like there’s a few quirks/bugs in the FR735XT that are awaiting a near-term Garmin firmware update to resolve some issues seen in the TrainingPeaks app.  I didn’t use the FR735XT variant for this post, but just some feedback I’ve heard from a few folks and TP has confirmed it is resolved in Garmin’s next FR735XT firmware update.)

Using it in a workout: 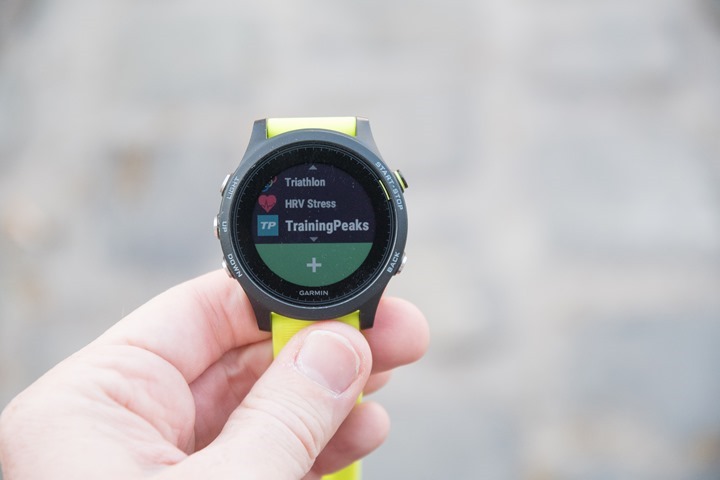 When you crack open the app you’ll see the initial TrainingPeaks logo, followed shortly by it going out to download the workout: 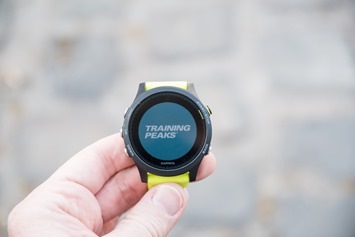 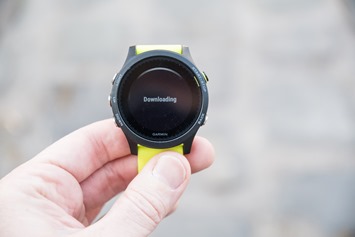 The entire process takes anywhere from 5-20 seconds, depending on where the moon is in the sky, whether or not you had bacon for breakfast, and other random things.  Once done you’ll see the workout listed for you.  This is going to use whatever name you assigned it within TrainingPeaks. Note that it’ll download only workouts for that day, but will download multiple workouts if that exists. 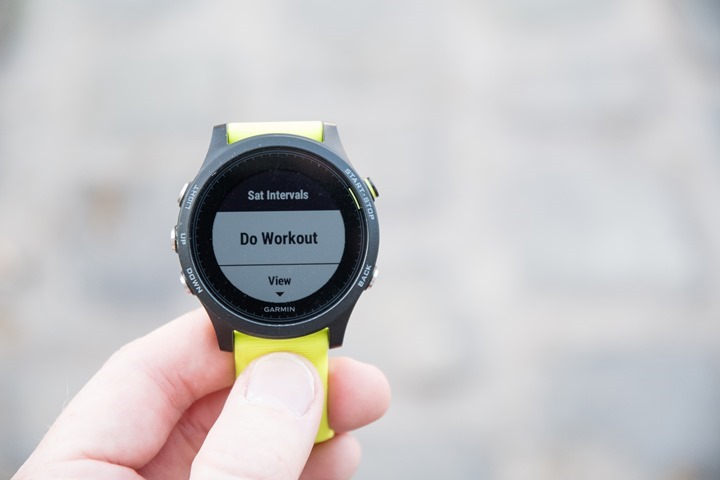 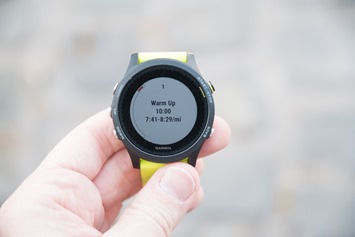 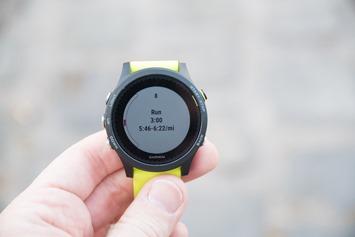 Once you select to do the workout, it’ll then prompt you to select a specific sport type for it. 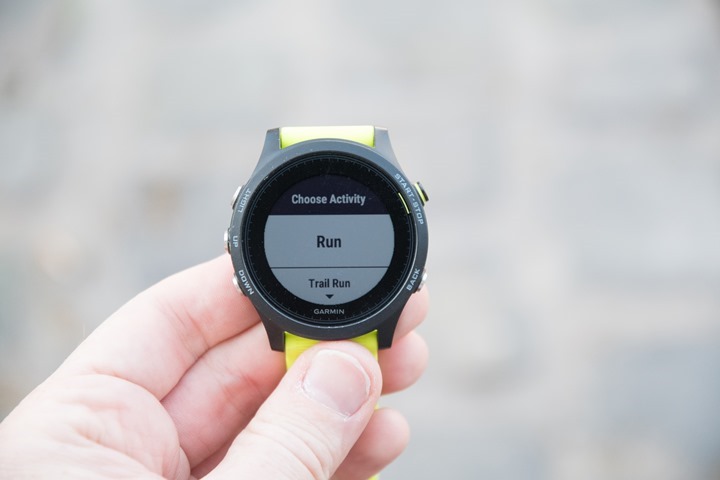 Finally, you’re ready to start the timer and begin the workout. 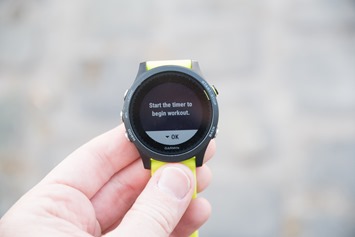 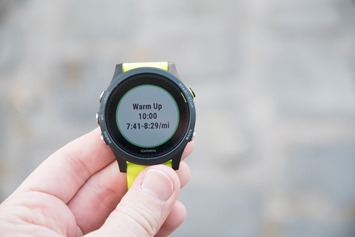 From that point forward the watch will execute the workout using the normal Garmin workout function, which shows you how much time is left within each segment as well as the targets for each segment.  It’ll give you a nifty graphical gauge for the target, letting you know if you’re under or over.  Also, it’ll beep at you if you’re too far out of zone. 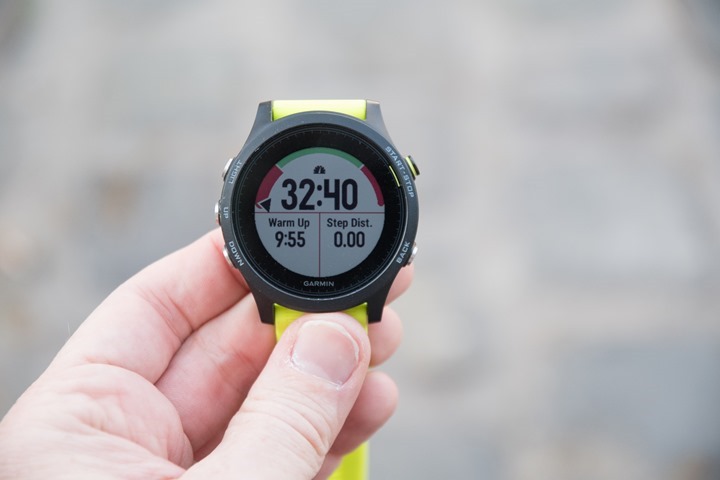 Interestingly even though you may have set a specific pace for a given section (i.e. 7:55/mile), the watch parses that with a bit more latitude.  It’ll give you a broader range, and your goal is to keep that gauge in the middle.  Do keep that in mind when executing the workout, since you may incorrectly believe that you’re ‘all good’, when you actually missed your target pace by 20/mile (which, for the record, is a crapton).

In any event – I put together the below video which shows you how all this works in real-time, iterating through an interval workout this past weekend using the app:

(Note: A few astute viewers noticed in the video that the laps were missing from the analyzed workout.  That’s because I had two watches – as always – and one synced faster than the other. The one without the laps.  Normally it’ll show laps for each section.)

So, what happens once you’re done?

Well, the watch ends the workout like normal when you press the stop button, and then you’ll save the workout like normal.  None of that changes.  Further, assuming you’ve got Garmin Connect to TrainingPeaks autosync setup, then it’ll send that file over a few seconds later to TrainingPeaks (also, like normal).  Again, at this point the app has no awareness of what’s going on.  It’s long since left the building and is drinking margaritas on a beach.

Meanwhile, over on TrainingPeaks, you can find your completed workout.  You’ll see it’ll have automatically joined the structured workout on your calendar together with the one you just completed.  This allows you to see the steps up top, and the completed data down below: 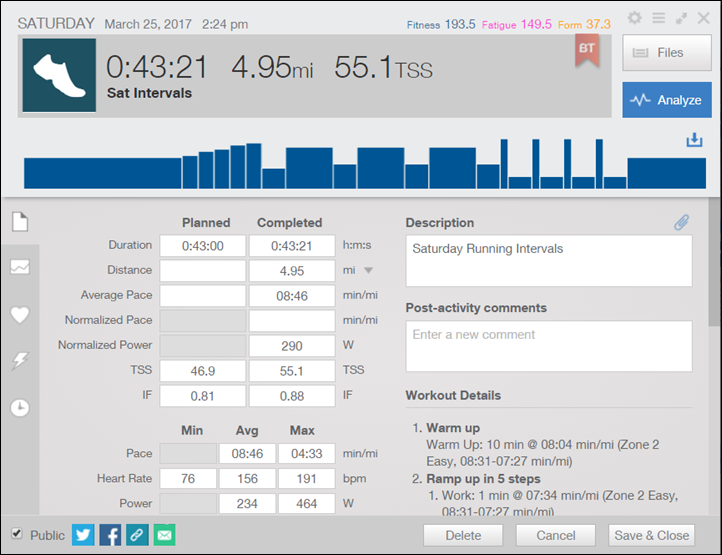 And then if you crack it open to analyze it, you’ll see a lap marked for each section of the workout, automatically created.

You’ll also get data from that workout as you normally would – graphs and all:

And there ya have it – the entire functionality in one not-so-quick post.

Now – one tip: If you don’t run/ride/whatever with your phone, you need to remember to open up the app at some point during the day and sync the workout to your watch.  That’s because when the app opens it depends on having a Bluetooth Smart connection to your phone (and thus Garmin Connect Mobile) to contact TrainingPeaks.  Without that, it’ll simply error out.

The good news is that once you open that app on that day, it’ll download that workout automatically to the structured workouts portion on your watch.  So later in the day when you head outside without your phone you can simply open the standard ‘Workouts’ function (usually in the ‘Training’ section), and find the workout there. 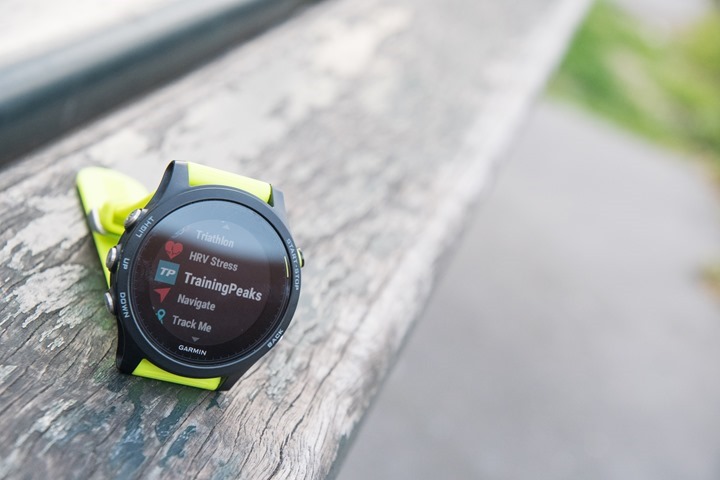 Now some of you above may have been wondering whether there’s any overlay of the structured/planned workout on top of the executed workout.  At present as seen above, you get shown the structured workout at the top of a workout, but it’s not overlaid on the workout itself.  Nor are you ‘graded’ on how well you executed the workout.

The good news is TrainingPeaks says that’s coming.  They sent over a few screenshots of how it looks on their current dev/testing servers showing the upcoming functionality.  You can see in the below screenshot how they’re overlaying the planned work intervals (in blue) on top of the executed workout (pink).

You’ll also note in the upper left corner are grades for each workout.  Essentially scoring the workout on your ability to execute it correctly.  Here are a few more samples.  Different workouts, each with different targets/types.

Definitely cool stuff – and inline with what we’re seeing with other sports tech companies doing as well.  With the overall trend in the industry using technology to focus folks on correctly executing structured workouts (rather than overachieving or underachieving).  Oh, and as a side note – sister company Best Bike Split also released a similar app as well yesterday that more or less acts in the same way.  You can find that app here.