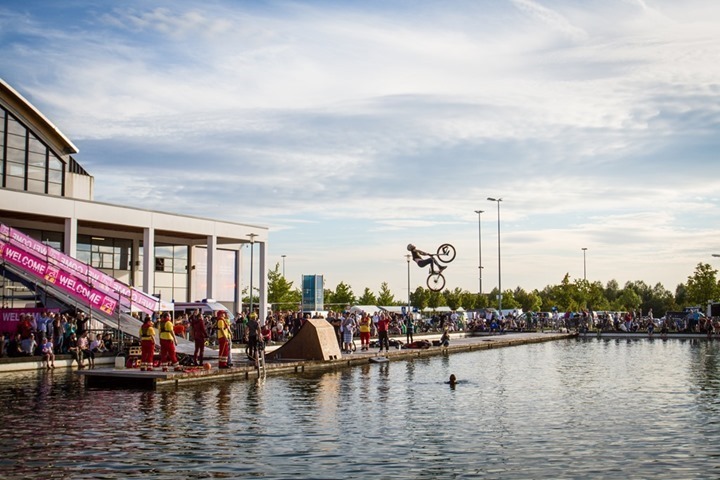 What if I could give you the future?

Or more specifically, the unannounced future?

Yup, I’m going to do just that.

Over the next 3.5 weeks there’s going to be a crapton of new products announced.  Almost all of these are centered around both Eurobike and an event called IFA, both held in Germany, and both held the last few days of August and into the first weekend of September.

Now since I can’t tell you what’s being announced, I’m just going to have to give you a blank check.  This check states that I’ll let you choose whatever product you want that’s announced between today and September 5th, 2017 – as long as Clever Training carries it.  Be it a new trainer, a power meter, a bike computer, or perhaps even a wearable.  Heck, could even just be a pair of socks that you apparently really…really…like.  Or it could be some totally new category you’ve never heard of.

It’s your cake, and you can eat it too.  So dream big!

In-Depth Review: The past history of Eurobike

Even if you don’t win, you can still support the site by using either Clever Training or Amazon, even though neither technically sells the future.  But they will likely sell whatever it is the future brings. If you purchase through Clever Training or Clever Training Europe, DCR readers can use coupon code DCR10BTF to save 10% off any order (or get 10% back in points on almost anything else), plus most devices get free shipping too! Support via Clever Training makes giveaways like this possible!

To enter, simply leave a comment below within the 2-hour timespan specified above. All entries must be posted below in the comments section by the time the giveaway officially closes per the posted times above. Winners will be chosen randomly. Products will be shipped to winners within a few days by Clever Training. Everyone worldwide is of course eligible as always.

Comments may take a short while to show-up, simply due to the various spam-filters catching them. I’m going through manually and approving any caught comments. So refrain from re-trying 17 times, fear not, it’ll show up. Note, only one entry per person per giveaway item. If you have questions on giveaways, see my FAQ here!