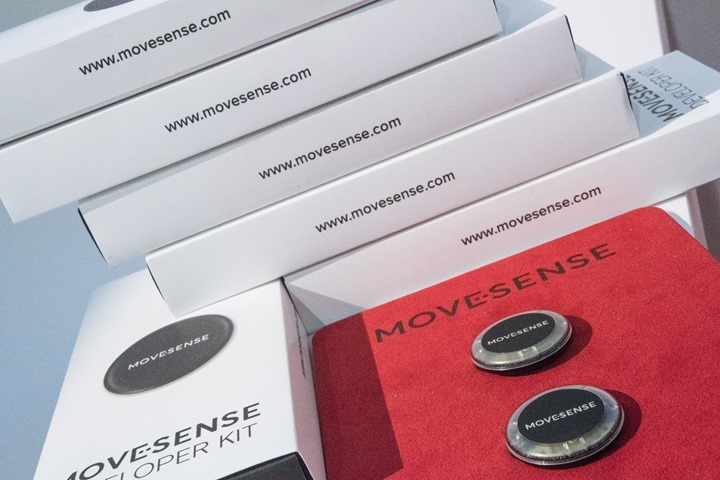 This past week at CES, Suunto introduced not one but two different products.  Of course, it’s the Spartan Wrist HR watch that got most of the attention, complete with distracting green lights.  But it was the almost not even mentioned Movesense announcement that might be more interesting longer term.

Much like Polar’s heart rate strap announcement, the Suunto strap at first appeared to be just another strap.  But like Polar, once you peeled back the onion layers, it became apparent it was far more than just another strap. I got a bit of hands-on time with the unit and sat down to chat with the team behind it.  Let’s dive into it. 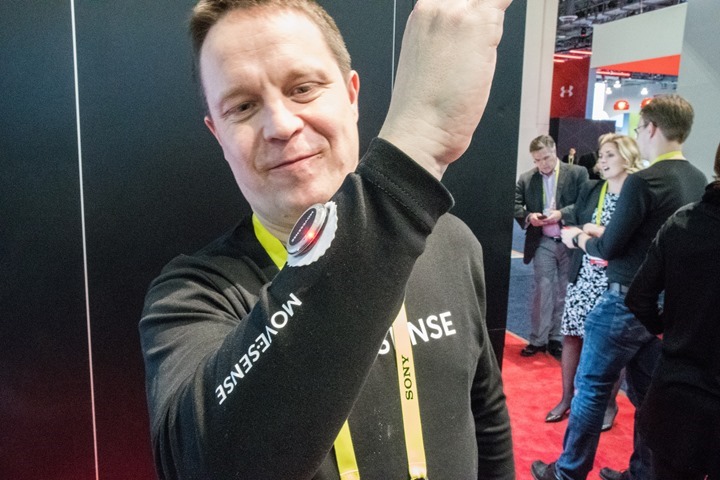 It’s easy to mistake the small pod: Isn’t that just a translucent Suunto pod with a blinky light?

And while yes, it is somewhat see-through, and yes, it’s the same size and round cookie-like shape of past pods, it’s totally different inside.  Here’s the list of new goodness stuffed inside the Oreo:

What’s that magic fairy dust you ask?  I’ll come back to that in a second.

As is probably apparent by the list of technology above (further details in their site’s PDF), the purpose of this strap is to act as far more than a heart rate sensor (which it still does).  Rather instead, to act as a data collector sensor.  One that may not even be worn as a chest strap at all.  In fact, Suunto really doesn’t see this as a heart rate sensor play.  The play here is focused on capturing sensor data and making it available to 3rd parties.

Of course, that 3rd party piece requires some form of API or SDK (Application Programming Interface/Software Development Kit), which Suunto surprisingly delivers upon here.  Suunto is already shipping what they call the ‘Dev Kit’ version of this unit, allowing developers (or just hobbyist tinkerers) to dive into leveraging the sensors.  They actually introduced this last month at an event for developers in Finland, where the team says they were flooded with interest. 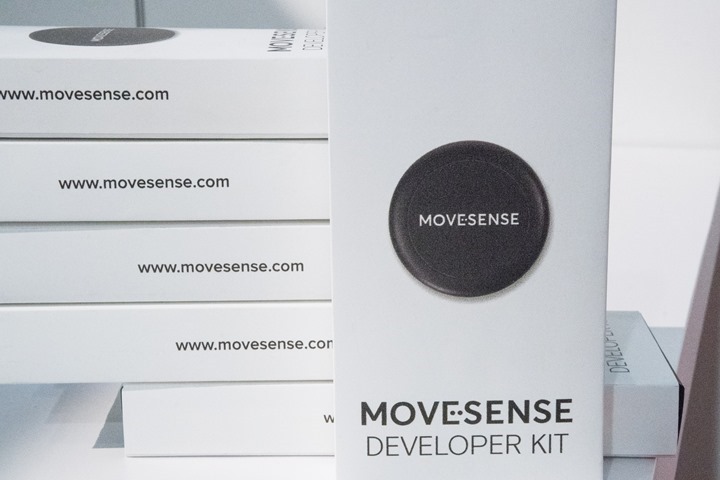 Within the Movesense platform, companies (or individuals) can write programs that run within the strap to record data to the pod, most notably sensor and movement data – but even data from connected devices on the back of the pods connectors.  From there the companies can offload that data into their own applications (via Bluetooth Smart), or down the road be able to leverage the Suunto Movescount platform to store and visualize that data.

So what about that Magic Fairy Dust?  Well, that integrates with the pin awareness I mentioned earlier.  Specifically, the pod itself can communicate to accessories via the connectors on the back of the pod.  Now obviously it does this to connect to something like a HR strap, but it can also be leveraged into other wearable clothing applications.  Or heck, even something like a pair of skis that can measure flex.  But the real piece of Magic Fairy Dust is that Suunto is allowing folks to implement DRM-style validation checks.  Meaning, a company could actually restrict their specific Movesense pod to only work on their own equipment/products.  DRM (Digital Rights Management) is of course the much-hated software mechanisms that music and movie entertainment companies leverage to make it difficult to copy music/videos (even for legitimate purposes, like backup).

Though, Suunto argues that’s really not their purpose here – and they themselves don’t really have any plans for leveraging that piece of the technology.  Instead, it’s just showing the capabilities of the platform and what might appeal to various 3rd party entities.  Portions of that technology can also be leveraged for giving a sensor awareness of what it’s connected to.  For example, is the pod attached to a chest strap, or a bike seat? 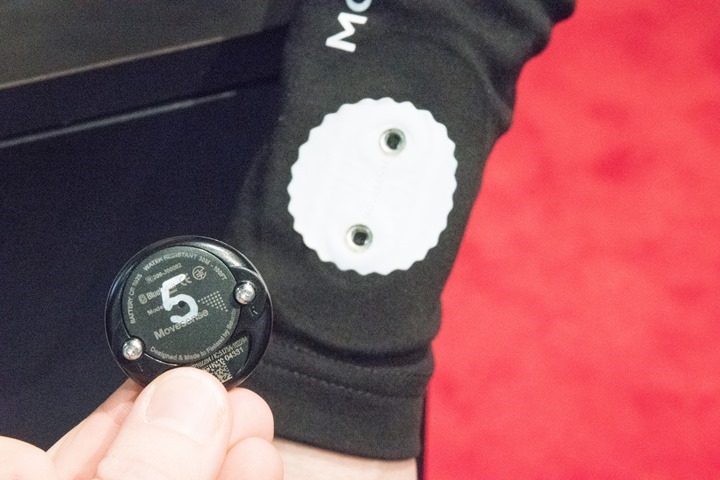 And that’s key to understand.  Suunto is largely positioning this today as a B2B play, focused on offering the platform to smaller companies, such as startups, that would have to spend significant sums of money to create a basic sensor platform like this. And that’s certainly true.  This is effectively a Raspberry Pi-esque fitness sensor platform that’s hardened for the outdoors/sports.  Suunto knows how to do that hardening, and has manufacturing capabilities that far exceed what virtually any startup has access to.

Companies can re-brand these pods however they’d like, and purchase them in bulk – even 10,000 units if they’d like to.  Alternatively, they can also work with Suunto to purchase smaller quantities.

In fact, all there is today are dev kits.  Suunto isn’t yet making a full-on consumer version of the pod, though they expect to see that happen eventually.  They’ll likely follow in the footsteps of Garmin, Wahoo, and Polar – and simply wrap it up as their next-gen HR strap.  Suunto says that once they do, it’ll be priced basically the same as their existing straps today, which float between $50 to $100USD.

Sure, Suunto has two different case studies on their site, demonstrating 3rd party companies already using the platform.  And that’s cool and all.  But sometimes I find the hobbyist-style case studies are easier to grasp, and quite frankly more fun.

Ironically enough, this example comes from one of the lead product managers, who took to outfitting his kid’s hockey team with sensors.  This in turn allowed him to collect a crap-ton of data, which he actually uses being the coach of the team.  It’s both geeky cool and perhaps a tiny bit over the top.  But again, in a geeky-cool kinda way.  Here’s the sensors, which were attached to the should pads on each kid: 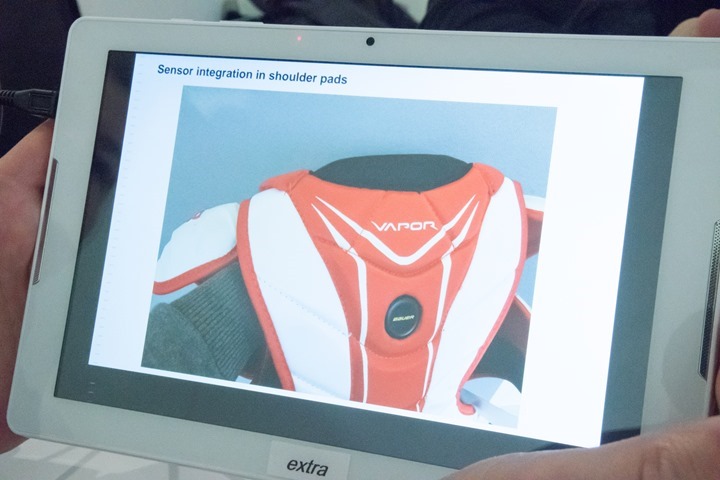 From there I got to see an impressive 428-page PowerPoint slide deck on the astounding amount of data collected for each kid (ok, it was only like 231 pages).  For example everything from how much playing time each kid got on the ice, to the effort each kid was putting out.  This then allowed him as a coach to ensure that the players were getting even time on the ice (still young enough for that), as well as not overexerting players. 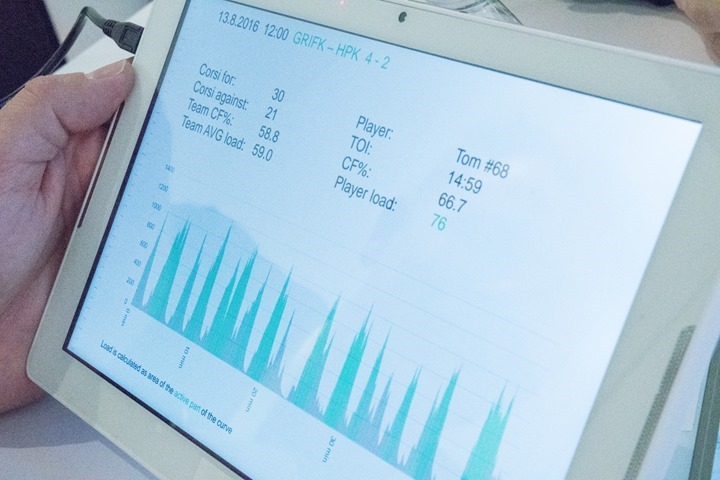 He was even able to start creating metrics showing fatigue levels of the different players concurrently by mapping sensor data within different practice sessions.  That then allowed him to better understand how players fatigued in games. 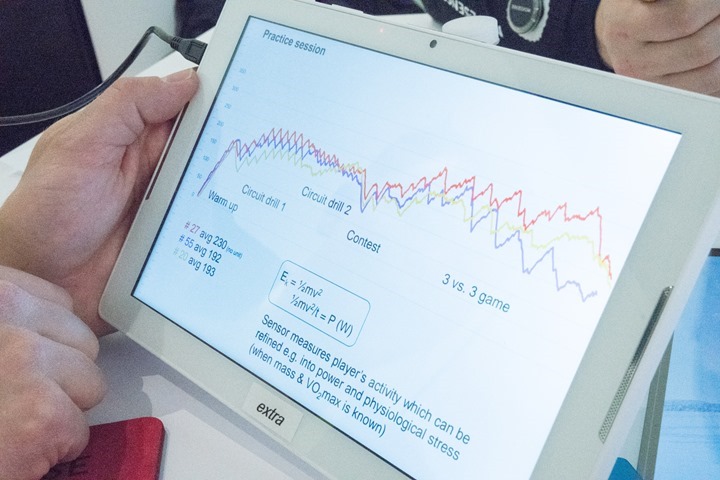 Of course, not everything in the above kids’ hockey data app is validated as part of some fancy scientific study.  Instead, it’s allowing someone to easily collect data in a sports situation that would otherwise be difficult.  This is just one example of how to use the data.  Or, I suppose, an example of what happens when you give someone kinda like me too many gizmos and gadgets.  Still, you get the point on how the tech could be used. 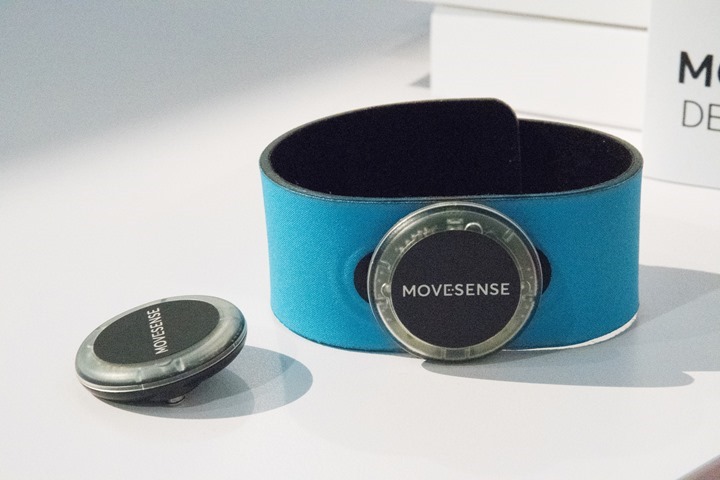 So what’s the long game here?

Well, in some ways it’s Suunto acting like an incubator.  And that’s not a bad thing.  Sure, this takes away a couple of resources from other Suunto projects (literally, it’s just a few people), but it likely benefits both consumers and Suunto themselves in other ways not immediately obvious.

First up, the benefit to consumers (you) is that Suunto is becoming more exposed to the fitness/wearables startup space.  They are also being “forced” to interface to 3rd party companies more regularly, and understand the benefits of doing so.  I’ve often criticized that both Suunto and Polar have become too insular in their products/platforms.  My hope here is that this trickles down/back/up/whatever into other Suunto platforms/products.  For example, maybe we’ll see them make Movescount (web site) more open than it is today.  And in doing so, that’d benefit consumers.

Next, we’ve got the benefit to Suunto themselves.  They’ve been pitching the Movesense strap design for a while as the next generation strap/pod.  And there has indeed been some pickup of that – we’ve seen a handful of other companies adopt it.  But that’s all been for straight heart rate data.  This time, they’re pushing into being the go-to for a quick and simple sensor platform.  And I think they’ll have more success in this area, since it’s a more unique offering than just another heart rate strap.  It can’t be overstated how much time/money this would save a startup that just needs sensor data, but doesn’t want to get into the business of manufacturing said devices.  CES this year was full of companies trying to do things with sensors that would love to cut out the manufacturing aspect of it if possible.

For example, look at the Pioneer bicycle sensor system outlined this past fall.  While the Suunto pod doesn’t have strain gauges in it, it does meet the requirements for everything else Pioneer is doing. In many ways, this would be a perfect solution for those pods not needing strain gauges.  The Suunto platform is designed to allow interoperability between multiple sensors (i.e. having a sensor on a shoe, another on a helmet, and another on the chest).  Sure, Pioneer would want ANT+, but Suunto is using the Nordic nRF52832 chip, which is capable of ANT+ just fine, should Suunto enable it.  Of course, Pioneer likely has no plans to switch – instead, this is me just giving some simple examples of how it could work with even mainstream companies.

Of course, whether or not Suunto’s platform succeeds remains to be seen.  But the ‘cost’ to Suunto is relatively minimal, and I think the long term gain of them acting more like a startup than a watch company is good for consumers and Suunto themselves.  Plus, as Suunto itself has seen over the past year – if you only focus on one thing/product, and don’t focus on the future, then as a tech company it doesn’t tend to turn out well.  I think they’ve learned a lot from the Spartan series situation, and this looks to be an application of those learnings elsewhere in the company.

Catch all the CES 2017 posts here in one handy to read page.  And fear not – there’s still tons more to come from (the massive backlog of) CES!