Garmin enables migration from Fitbit: Here’s how it works 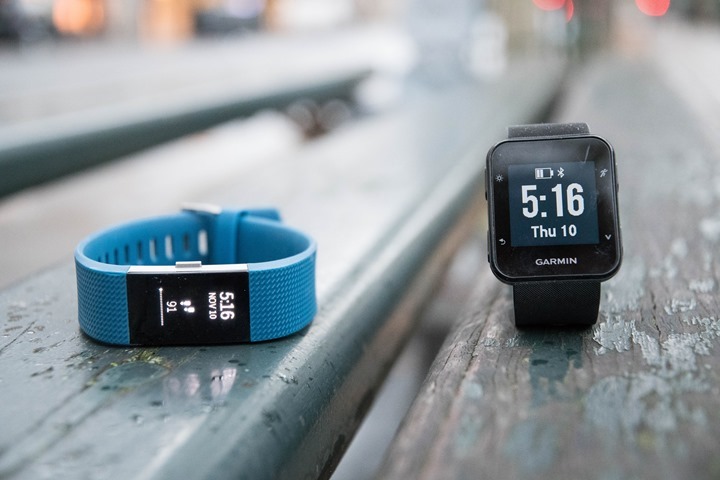 The first combo-dish one I dove into in a separate post already today, and the second one I’m less interested in.  I talked about Strava Beacon here, and this essentially allows you to have your Garmin device trigger the Strava Beacon service (*see my 5-second thoughts on this at the end of this post).  Whereas the rest of this post is all about the Fitbit to Garmin migration piece.

Speaking of which, the service is actually named: Fit a Bit.

Trolling level is high in these parts.  Almost like when Garmin trolled Apple during their Apple Watch announcement.

(As to why I have two posts on Garmin updates today instead of one, it’s simply because I broke them apart when I had to wait while Garmin fixed some issues I was having.)

Now in order to test this, I wanted a completely clean slate.  So I created a new random account on Garmin Connect.  Totally virgin, not a single step walked or night slept (with anyone).

Now Garmin doesn’t exactly make it obvious as to where to go.  In fact, even the press release doesn’t have a link or anything on how to set this up.  I would have thought the very first thing Garmin Connect would have asked upon creation of a new account is “Do you have any previous activity tracker data to import?”.  But it doesn’t.

Instead, you have to know to click on the bust on the left side, which then shows you an ‘Import Data’ option.

Next you’re given the option to import either specific activity/workout files, in GPX/FIT/TCX format, or Fitbit scale and activity data.  In the case of the workout files, those three file types cover basically everyone/everything out there.  Whereas the Fitbit body data is specific to the formatting that Fitbit has created. 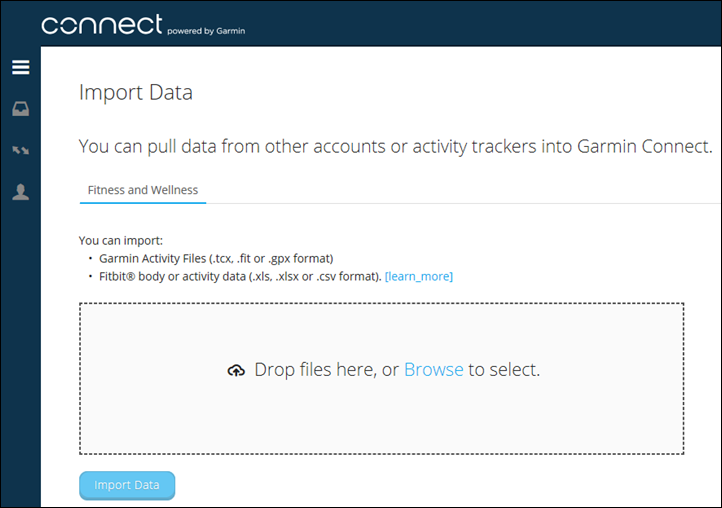 Garmin helpfully links to Fitbit’s own support page on how to export your data.  For step data, you can do it all in one giant shot.  Whereas for workout data, you’ve gotta do it one by one (which sucks…every…single…activity).  To be clear, that’s Fitbit’s issue for not just having a giant ‘Download everything’ option.

On the Fitbit site, you’ll go under Settings and then Data Export: 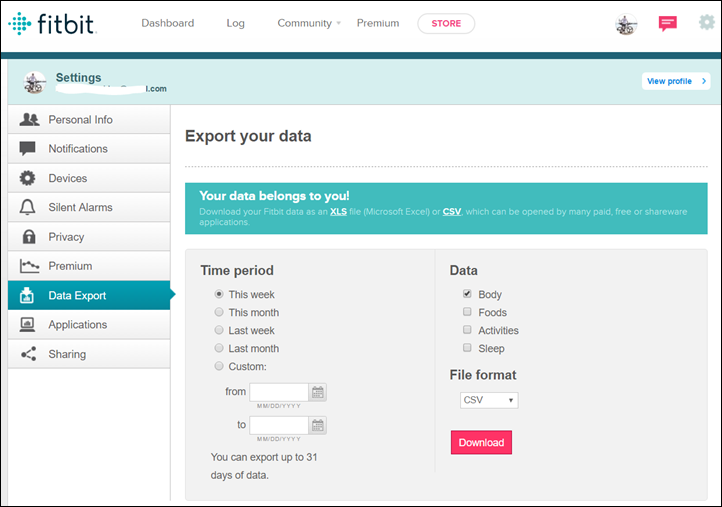 Now the really important part here is another limitation that Fitbit has on exporting out data, which is limited to 31 days at a time.  So, I just did basically the last month’s worth, since I’ve been wearing the new Fitbit Charge 2 during that time period. 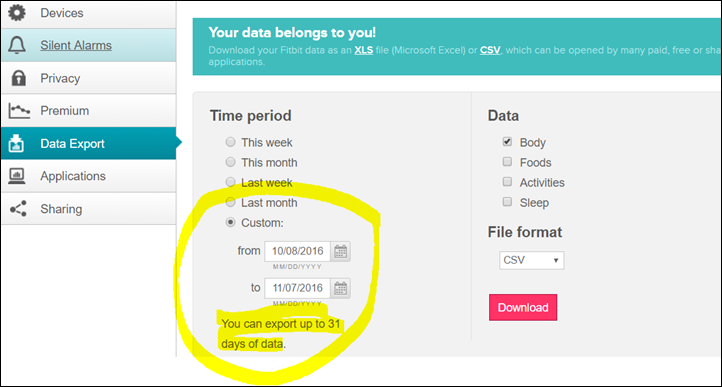 I then checked all the boxes on the right side.  Mostly because when in doubt, just choose everything.  It serves me well when at the ice cream sundae bar, so I figured it works fine here too.

A few seconds later I got the file to download: 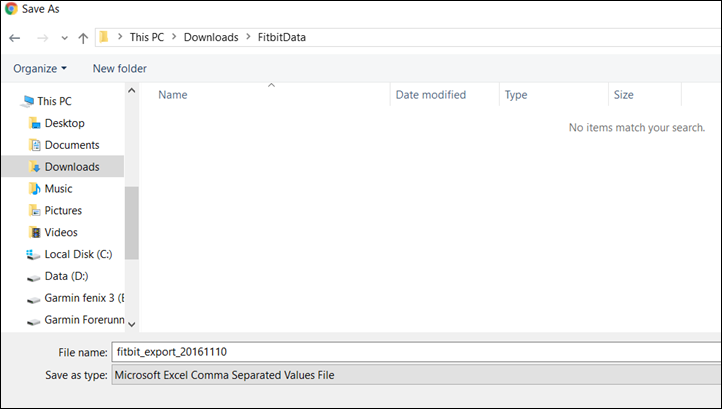 I decided to take a peek at the file, since I was curious how much data could be moved over.  Looking first at steps, it’s pretty clear cut.  It just saves totals per day, but also inclusive of things like floors and minutes sedentary. 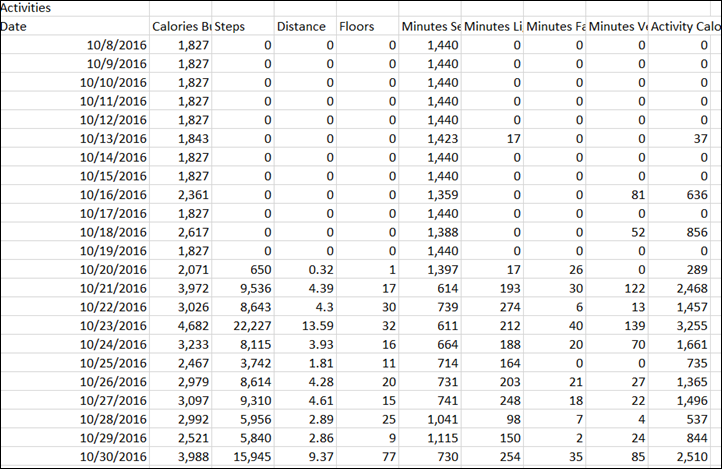 Weight measurements are in there too, but I didn’t step on the Fitbit scale during this time period.  Still, Fitbit just puts in the last known value for each day. 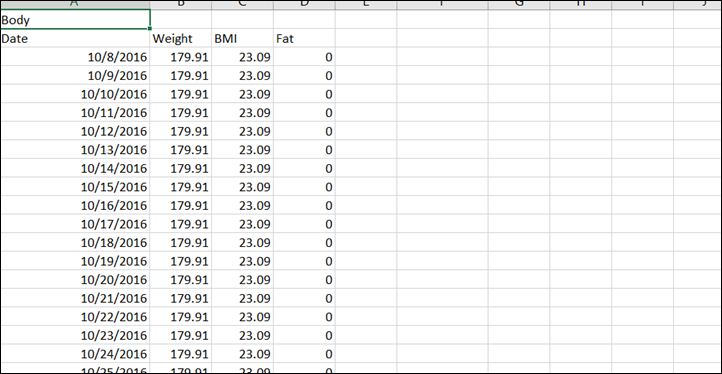 Sleep is there as well, again, pretty simplistic.  No wake-up/fall asleep times, just totals for each night. 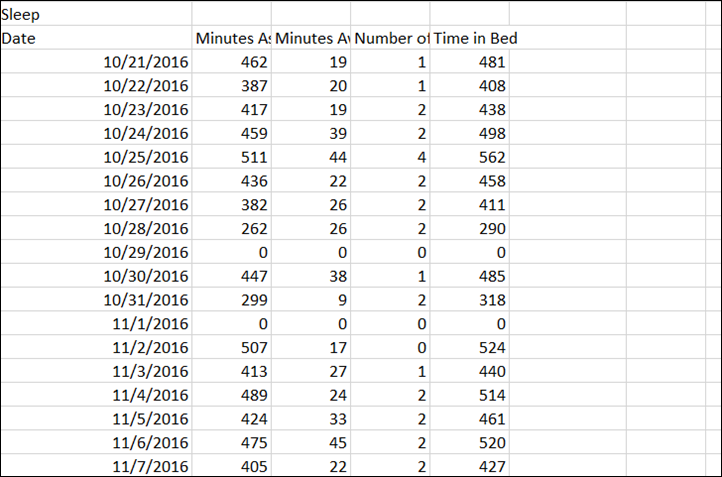 Finally, there’s food logged for each day.  But since I don’t log food, these are all zeros.

What you’ll notice is that none of the workouts are in here.  Rather, it’s just activity data.  As I noted earlier, you have to do the workouts individually, one painful one at a time.

So, back to Garmin’s site I went, and dragged my little 10KB data file into the box doohickey: 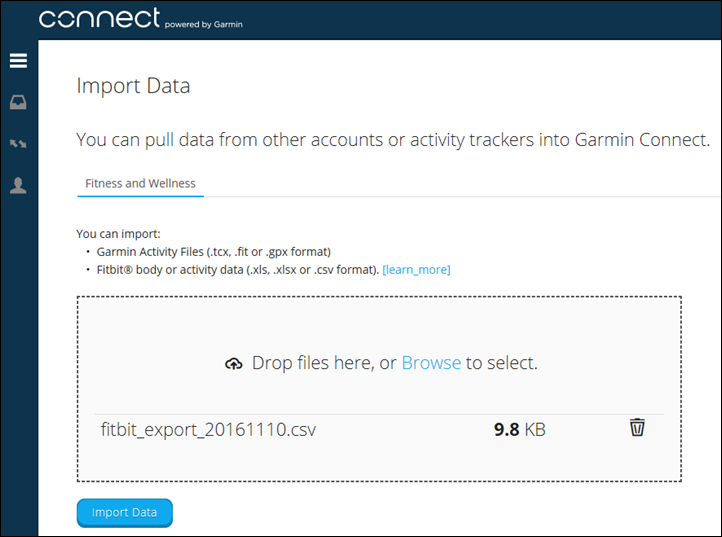 It’ll then confirm the type of units I was using on the Fitbit site/data:

About 1.2 seconds later, it completes (with zero fanfare), and shows as such on the page: 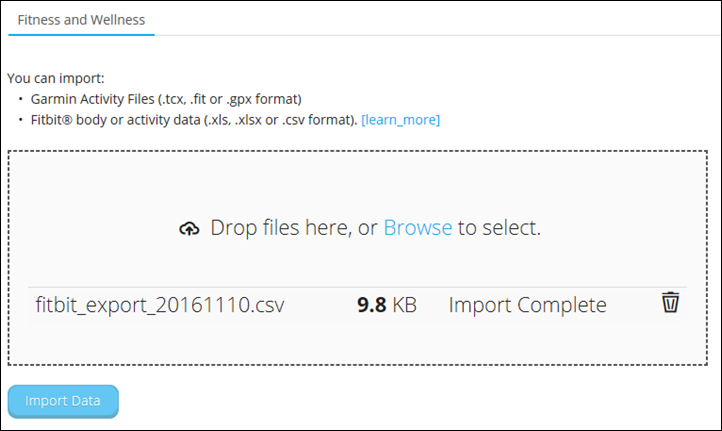 With the assumption of success in the air, I went to check out my dashboard and dove into steps.  I figured that’d be the easiest one.  Yet…nothing: 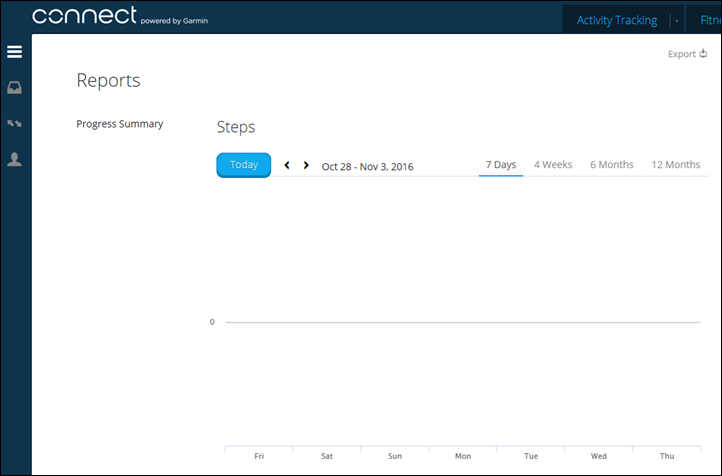 I double-checked my Fitbit file, and indeed, it showed plenty of steps on those dates.  So then I looked at sleep. Also, nothing.  Same for weight as well (which has values in the file).

So I decided to give it some time.  After all, there was a massive amount of data imported – some 10KB in total.  That’s like 5 Blu-ray DVD’s worth, right?

I shot off an e-mail to some people I know, and then went for a run.  And then 24 hours later they (Garmin) fixed something magical behind the scenes and it started working.

To double-check the data imported correctly, I started by picking a random day – November 1st it was. And then looked at both the Fitbit data (on the right), and the Garmin Connect data (on the left). 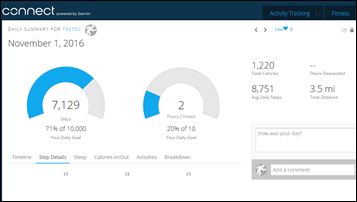 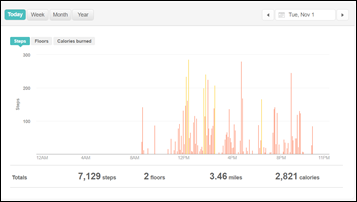 Looking through them, it correctly copied:

However, calories was quite different.

So I decided to do some digging and see why.  I went back to the Fitbit CSV file and checked out the calorie section for that day: 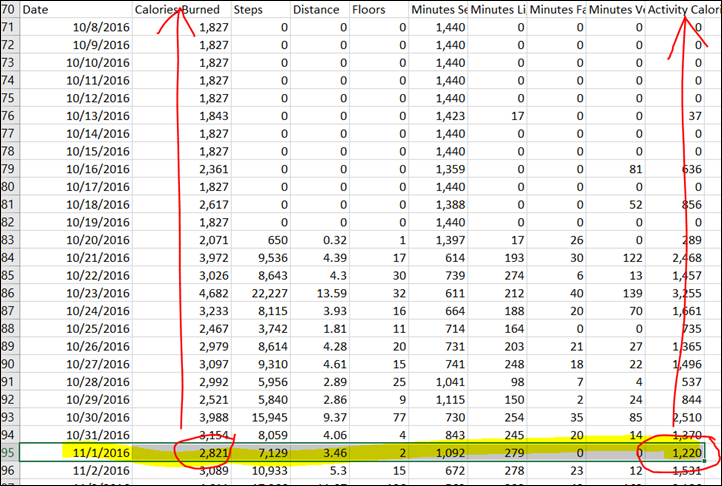 And immediately you see why.  Garmin is (incorrectly) parsing Activity Calories instead of Calories burned.  Or perhaps they’re doing it on purpose.  Either way, I think it’s a (minor) mistake.  Garmin normally includes your BMR calories within their calorie calculations, thus using only activity calories would make less sense than total calories burned.

As you saw above, the floors climbed was correctly reported on an individual day – and then also shown in the various report totals: 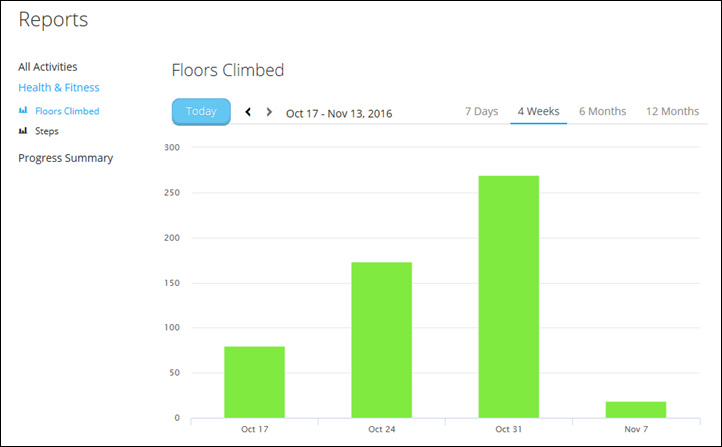 Anyway, onto sleep.  There was no sleep.  No, I mean, I was sleeping, but none of it was imported in.  I checked 4-5 different days, all show null (no) values. 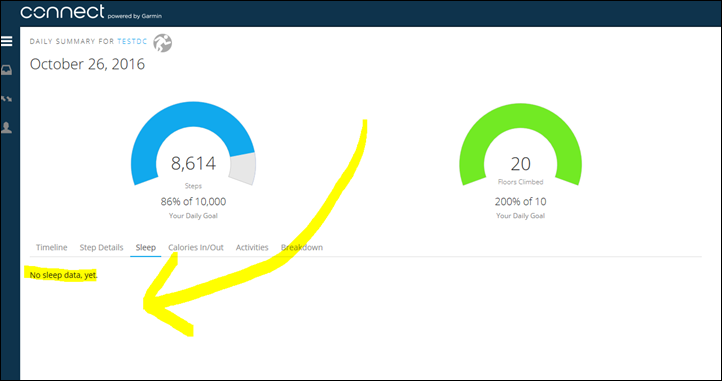 Last but not least, weight.  It did correctly pull over the values Fitbit had in the files. I didn’t weigh myself during this time period, but Fitbit records the last known weight automatically for each day in the export files.  All of which shows up correctly on Garmin Connect. 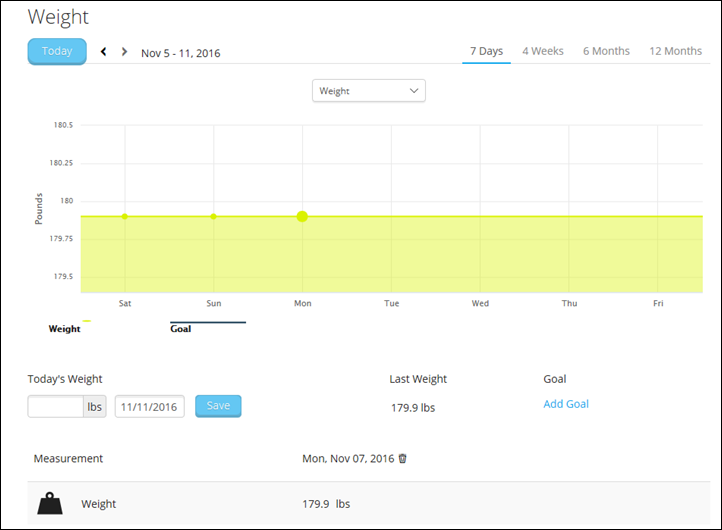 So there you have it – a quick overview of how Garmin converts stuff from Fitbit.

While this functionality may seem minor – I suspect it’s actually the beginning for not just Garmin, but other companies as well.  These types of migration tools are incredibly common in other software industries, enabling consumers (and corporations) to quickly move between platforms.

At present, the import tool is as you can see, pretty basic.  Ideally it’d be wrapped in a bit of a wizard and would leverage some sort of automation to grab the data for you (perhaps even available API’s).  And of course, as you can see there’s still some bugs to be worked out.  But I’d bet a penny the calorie one (along with sleep) will likely be fixed in short order (probably measured in hours).

That said, it’s leaps and bounds better than the competitors. Namely because the competitors have nothing.  Kinda like winning your age group at a race…but being the only competitor in your age group.  Still, any of us would take a free medal any day.  And in this case, data portability is a great medal to have.

*Strava/Garmin Beacon Hook-Up: Honestly, I don’t get it.  I’m not sure why I’d want to have Garmin trigger Strava Beacon (which requires paid Strava Premium), when Garmin’s own Live Tracking service is free.  Further, you’d now have to have both Strava and Garmin Connect Mobile apps open on your phone for this to work.  I’m sure this is useful to someone, but I’m not that someone.  It would probably be useful if Strava hooked up with Polar, Fitbit, or Suunto for this, since they lack their own live tracking platforms.  But since Garmin now has an exclusive on this for a while with Strava, that won’t happen.  Thus…shrug.