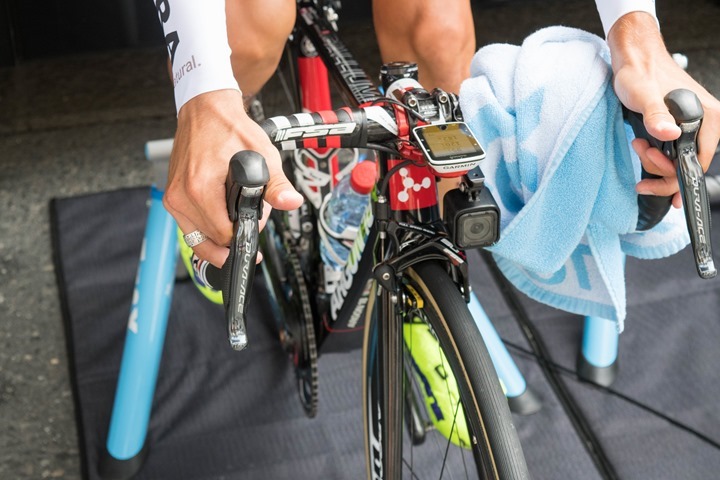 Yesterday I spent the day at Stage 18 of the Tour de France.  One of the advantages of this particular stage is it’s a time trial.  This means that each rider races individually, with the first rider of the day starting around 10:45AM, and the last rider of the day finishing around 5PM.  This means that at the starting area the teams are visible at the buses and busy/active virtually all day long.

Which in turn means there’s tech (and new tech) available to photograph all day long.  Further, since all riders will warm-up for varying time lengths on the trainers, they’re actually out and visible.  One rider’s warm-up had him doing about 40 minutes or so on a trainer prior to the start.  Whereas a regular stage may see no riders warming up on trainers, thus, they aren’t brought out for every stage.

Meanwhile, in the power meter (PM) world you’ll often get teams trying out new tech in the later days of the Tour, and that includes new power meters or updated prototypes of previously known power meters.  There was more than one team riding prototype units out there.

Before we move on, remember one thing with pro teams and gear: They’re all sponsored.  Companies pay for sponsorship of a team, and/or provide gear for free in exchange for visibility.  It’s the way the industry works.  For trainer and PM tech, it’s more commodity than other bike parts, and thus to a large degree the highest bidder will win.

Oh, and lastly, there are two specific new things not seen before or published anywhere else that I managed to find.  One each in the trainer and power meter section.

Trainers of the Tour: 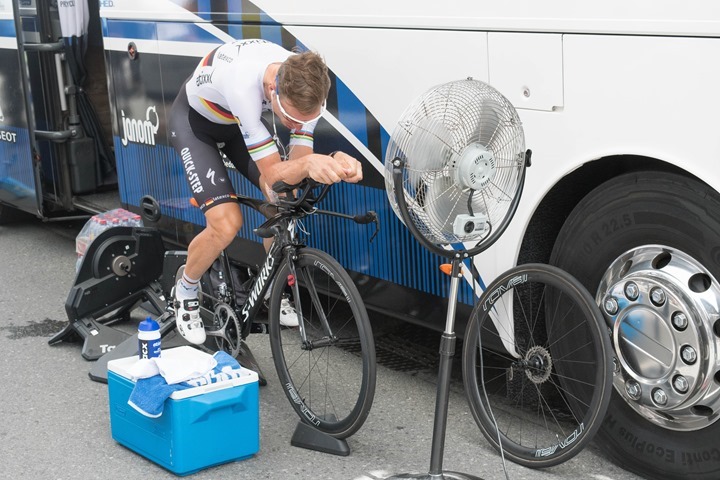 When it comes to trainers, they’re virtually always team-wide sponsorship’s.  This means that the whole team is all using the same brand of trainer, albeit sometimes differing models.  In many cases teams will choose trainer models that work without power for use on the Tour, which may skew them away from higher end computerized models – as many high-end models require being plugged in.  Sure, team buses can provide such power (and they do in some cases), but it’s just one more thing that a team has to deal with on race morning.

As such, the vast majority of the Elite sponsored teams are likely using additional other higher-end connected trainers when not in a race situation.  But for the purpose of today’s listing, I’m just focused on what was there and present on race day.

With that, first is an overall chart of what’s being used:

Next, here’s a gallery of trainer goodness, with a pic from each team.  You can hover over them to get the picture label specifying each team name.

It’s interesting to see that Tacx basically has everyone on the NEO’s across the board, minus two team’s with some Satori Smart units around.  Likely they just wanted some quick and light trainers to have available without taking a wheel off.

Similarly, on the Elite – virtually every team is using the same model, albeit a much lower end model (but it does transmit ANT+/Bluetooth Smart).  Again, in a warm-up scenario they don’t need a lot of complexity, so this works quite well.

On the prototype side, Wahoo was not-so-quietly showing off a new trainer (minus providing any details).  It can easily be picked out by the ‘look at me’ yellow styling: 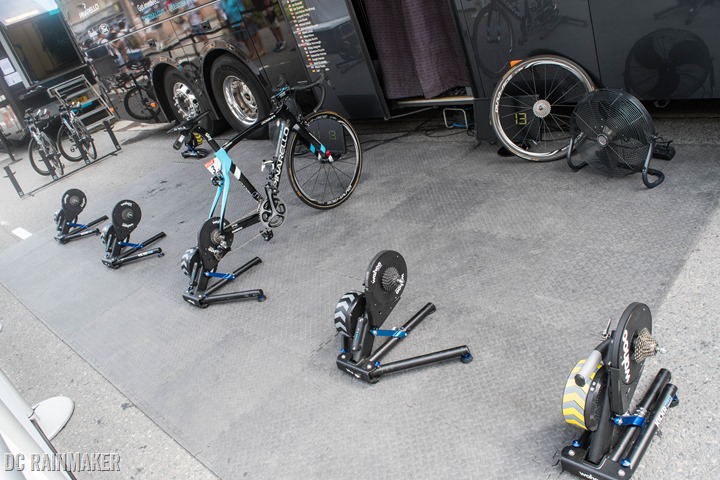 Here’s a bit closer look at it. 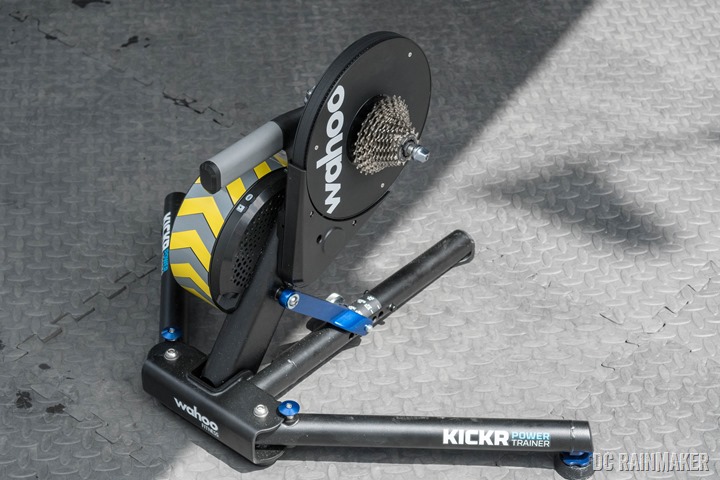 While at first glance many might of mistaken it for a regular KICKR, there are actually a number of tweaks to the two units when you look at them side by side: 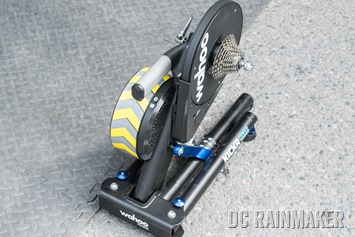 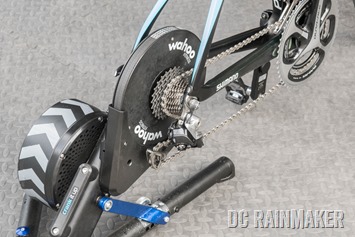 A couple of obvious differences:

Of course, Wahoo is keeping mum on the topic (despite Team Sky tweeting it out) and broadcast TV showing Froome warming up on it.  The unit was there for a good solid 6-8 hours yesterday, however I didn’t get to hear it in operation during the time I was there.  However rumor is it was quieter than a regular KICKR when Froome was on it, but given it’s outside where sound is easily absorbed, one has to take that with a grain of salt.  It still has a belt with grooves, so there will definitely be some noise there (though many have suggested ways of cutting down that noise significantly through different belts).

Also of note is that while the team bus had two yellow-themed units, the other unit I saw was definitely just an old KICKR with a new flywheel sticker. In any case, I’m sure as we near Eurobike we’ll hear more, though it certainly falls in line with rumors out there of a new KICKR for the upcoming season.  Plus, I get the feeling Wahoo was looking to stir things up a bit here, else they certainly wouldn’t have had Froome ride it, knowing TV cameras would be covering him during the warm-up.

Power Meters of the Tour: 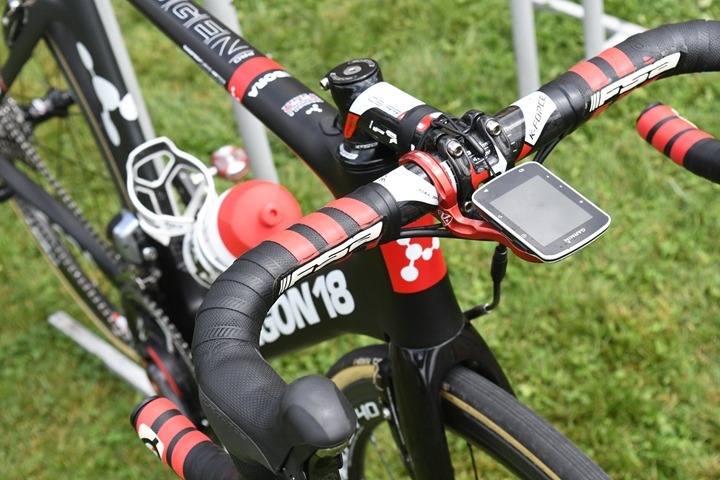 Now remember, like trainers, I would place almost no value on why one team chooses a given tech over another team.  Sure in marketing spin a team will say that they get something magical from one power meter over another, but in reality, that magic is called money.  We see teams switch between PM’s as soon as a better offer comes along – even when that offer is sub-par in capabilities.

Also, you’ll see many cases where teams will be running units for the whole season that aren’t yet available to consumers.  That’s in particular the case with 4iiii and Stages (left only power meters), where the teams (Team Sky and Etixx–Quick-Step) are in some cases using dual versions that aren’t shipping (or even offered in Stages case) to consumers.  Plus of course the Quarq prototype example below.

Then there’s some cases teams have an official sponsor for a given power meter, but aren’t actually using it.  That’s the case with Look for example, where Fortuneo-Vital Concept isn’t actually using the Look KEO power meter in the Tour, but just using the pedals.  You’ll remember this being very similar to Garmin Vector pedals a few years back, with only a portion of the team actually using it.  In the case of Garmin, that was due to it being more complex for team mechanics.  I suspect the same may be true with Look, given the pod-like nature of their unit that’s structurally similar to Garmin.

With that – here’s the run-down of where teams stand.

And for fun, here’s the run-down of photo galleries with pics of each power meter company on almost all the team bikes:

So, about those prototypes:

Quarq (SRAM): Yesterday I found a single rider from AG2R that was using a prototype Quarq power meter.  This unit was mounted to a SRAM RED crank arm, however lacked any of the obvious spider backed components typically found on a Quarq power meter. Since the rider had just started his warm-up I was unable to find a different vantage point before I had to run elsewhere. 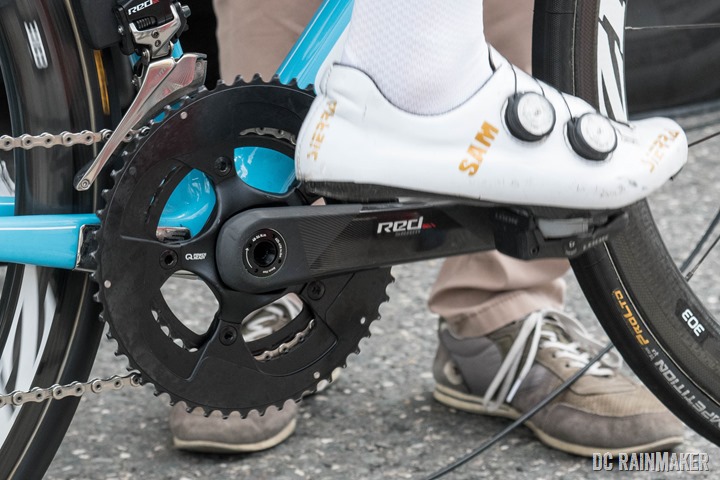 My guess would either be a bottom-bracket style power meter, or something built straight into the crank arms themselves.  I suppose it’s possible they’ve reduced the chainring attachment size so much to make it totally invisible from the side I was on, but that seems unlikely since other competitors are still quite visible from further away.  Further, it’s also possible it could be no power meter at all, and just a logo shell of nothing, but given every other bike in the collection had power on it, it’s highly unlikely a single bike would have no power yet still have a Quarq logo (especially on a time-trial stage where power is most critical).

You’ll see they’ve added a Quarq ‘Power Ready’ logo (using the Quarq Symbol), which hasn’t been used anywhere else to my knowledge. 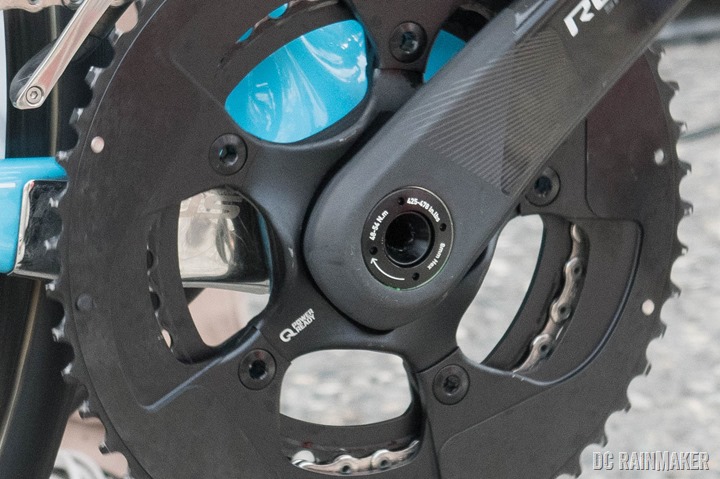 Note that only the one rider from the team was using it yesterday, all other riders were using standard Quarq SRAM RED units.

Stages: Team Sky is running a blend of both single-leg Stages (standard production offering), as well as dual-leg editions (not currently offered to consumers).  The dual-leg one hasn’t really changed much since the various prototypes we’ve seen over the past two years.  You’ll remember some additional (and much better) pics I took of it back at Paris-Roubaix in my tech section. 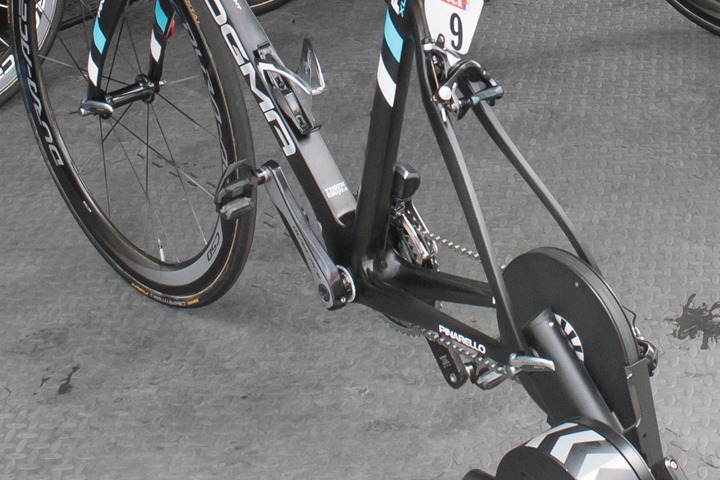 4iiii: Etixx-Quick-Step is running a blend of both single-leg 4iiii Precision units (standard production offering), as well as dual-leg editions (not currently offered to consumers).  Their dual-leg version that as previously shown off at Sea Otter, was announced today as being available (shipping) starting next week. 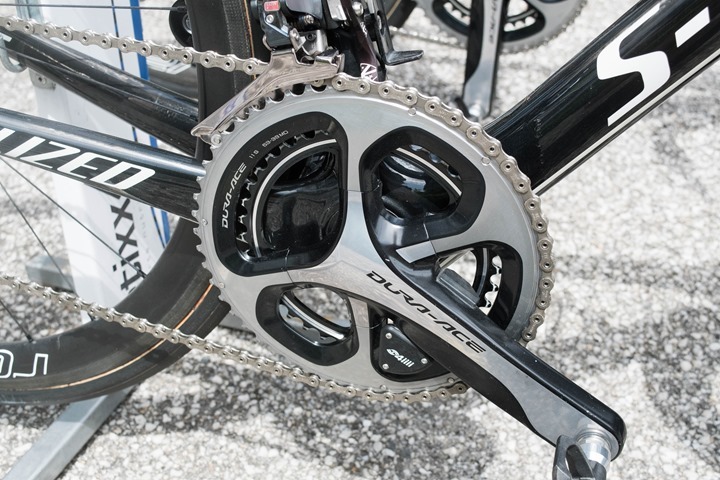 Power2Max: On one of Bora-Argon 18’s bikes there was a single unattributed Power2Max model.  This model looks similar to the Type S, except that the battery/electronics pod is now placed perpendicular to the crank arm, versus with all other Type S units it’s aligned to it. 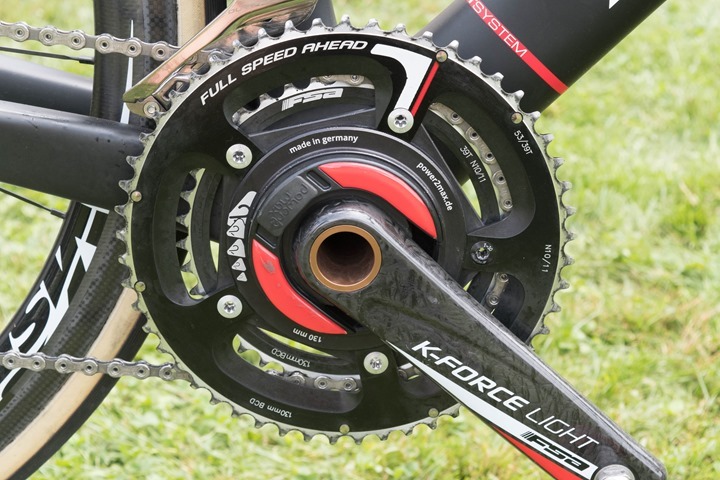 Phew! Lots of details to consider!  But definitely to me the two biggies were whatever Quarq and Wahoo have up their sleeves.

I’ll round-up the more casual ‘enjoying the stage’ aspect in tomorrow’s post.  And then of course we have Sunday’s final stage in Paris, which I’ll definitely be out and about at as well!

(Side note: I generally don’t talk about rumors and/or unreleased products on the site.  However, when a company rides something in the Tour de France you’re fair game as far as I (and every other media outlet) is concerned.  Especially a time trial stage where products are left out in the open for 6-8 hours.  Enjoy!)