This product has been discontinued by the manufacturer. It's been replaced by the Tacx NEO 2T Smart, you may want to check out that review instead. 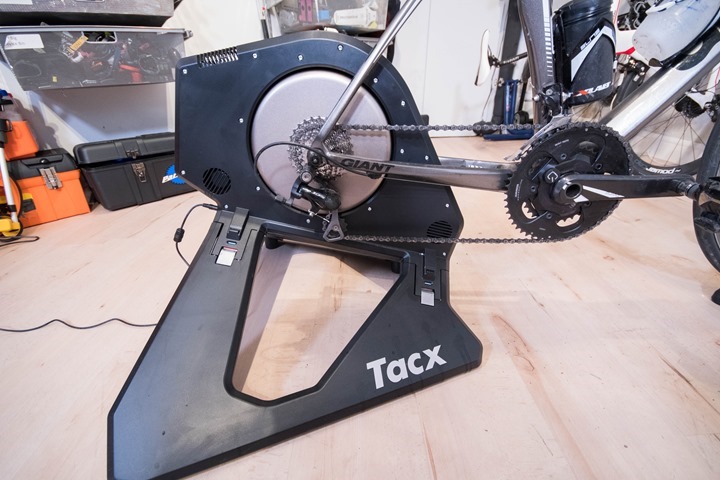 So here’s the thing – every time I go to Eurobike, Interbike, CES, or some other trade show I’m always asked the same thing by virtually everyone in every booth I visit: “What’s the coolest thing you’ve seen thus far?”

And honestly, my answers are always kinda blah.  The reason isn’t that there isn’t cool products or neat stuff.  But rather it’s usually minor evolutions of existing things.  Innovations that those who follow the industry know are coming and it was merely a matter of the product being formally released.  Rarely are they game changers, and rarely do they deliver a ‘Holy crap that’s cool!’ moment.  Sometimes it’s more about the ‘Holy crap’ moment than a new data metric.

To give you examples of ‘holy crap’ moments for me over the last 3-4 years, we have the introduction of the Wahoo KICKR in 2012, which completely changed the trainer landscape. Then there was the 24×7 wearable heart rate/body sensor sticker two years ago at CES.  Both of those were totally different than the norm.  It doesn’t take away from the required innovation and pricing shifts of everything else, but sometimes something is just cool.

And this year I’ll finally have a decent answer for the question at Eurobike: The Tacx NEO Road Patterns.

Seriously.  This is without question the coolest thing I’ve seen all year.  Then again, Eurobike is still to come…

But let’s not get too far ahead of ourselves.  Let me explain what road patterns are. 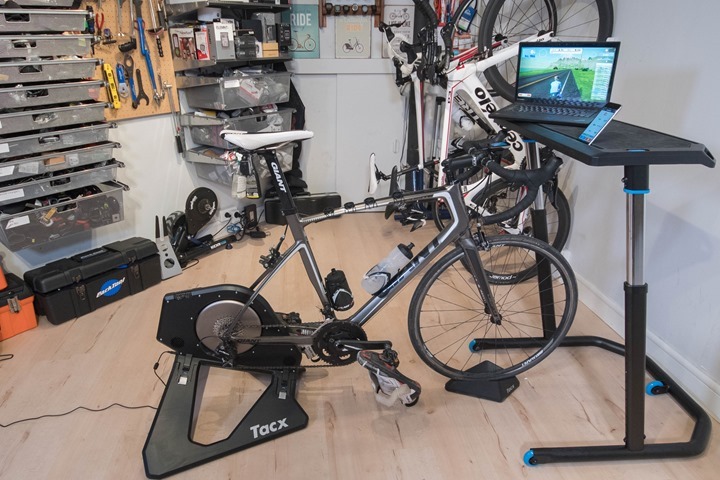 As of today, Tacx has enabled road patterns in the Tacx NEO smart trainer, which means that it can simulate the feeling of riding over different road conditions.  Yes, it actually shakes your trainer when you hit rougher terrain.  It uses the motor inside the NEO frame at millisecond frequencies to essentially shudder the trainer, providing the feeling of different road patterns.  It’s sorta like armpit farting – with enough creativity and speed, you can create wonderful works of art.  In this case, replica art of various road conditions.

The NEO can replicate the following nine road patterns:

Plus of course, no simulation at all – just standard pavement.  About the only conditions I can think of not covered would be mushy stuff – like mud, soft snow, and sand.  I suppose that leaves room for growth, right?

App developers can leverage these new modes via both an ANT+ FE-C and Bluetooth Smart API.  Further, each road pattern has an intensity level from 0 to 100%, thus allowing a developer to control how much cobblestone pain you’ll receive.

So how does it feel?

At least some of them do.  For example, I find the Wooden Boards, Cobblestones and Concrete Plates to be the most accurate.  It’s an almost perfect replication of what each of those surfaces feel like.  For things like off-road (compact dirt), it’s a bit tougher since most of the time you get nuances to compact dirt such as divots and random variations that aren’t really replicable here.`

You may be wondering what training value it could bring.  If that’s your thinking, my guess is that you’ve never had to ride cobbles for extended periods of time during a race (you should feel blessed).  One could easily see how you could train using the harder cobblestone profile with higher intensities for longer periods during workouts.  This would be valuable if you didn’t live in a place with cobblestones (‘Merica) and then were planning a race where they existed (Europe).

But then again – why does everything have to have a specific training purpose?  After all, Zwift itself is largely entertainment built around the premise of cycling.  With this free update, Tacx is able to increase the realism of riding a trainer.  And I presume that people who buy $1,600 trainers want realism.  The road patterns can also be found within the Tacx Cycling app (Tablets) films, Tacx Training Software (PC) films and VR. 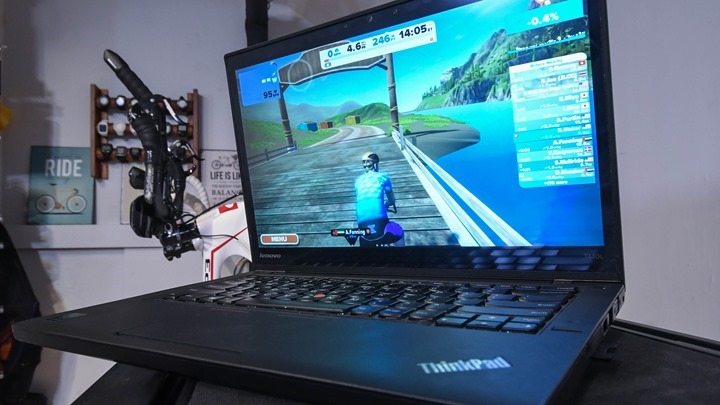 Speaking of Zwift, as of today they rolled out their support for NEO road patterns.  This means that as of this evening if you have the latest Tacx NEO firmware update you’ll get road patterns automatically as you ride over them.  So as you start your Zwift ride you’ll likely be on pavement, which means you won’t feel anything until you find some rough road.  But as you cross over onto another surface – such as compact dirt, cobblestones (like in the Richmond UCI course), or wooden boards (like in Watopia over the water) you’ll near instantly feel the shift by the trainer, which also will near perfectly match what you hear in the audio from Zwift.

Zwift can actually leverage both control mechanisms for enabling/disabling the road patterns on the NEO.  You can either pair your trainer using Bluetooth Smart and the mobile app, or ANT+ in the desktop app.  Either way, road patterns will work.  You may notice slight differences between the two modes in terms of when you cross the threshold between pavement and off-road.

In trying the desktop ANT+ variant out, it was switching on/off in about half a second, so plenty fast.  As you might imagine, Zwift has an advantage compared to other apps in that it knows/tells the road surface at all times.  Whereas an app that may simulate riding a video shot in the realm world would have to painstakingly transcribe the road conditions for the entire ride.  For example, do you enable every little section of concrete pavers when you cross over a crosswalk or other brief change?

No worries, I suppose that’s for app developers to decide as they implement it.  In the meantime, we have Zwift and it works great there.  Tacx noted that Zwift was able to enable this within their platform in only a single evening of coding, so it’s pretty straightforward for developers.

Here’s a quick look at how it works on Zwift in this video I put together: 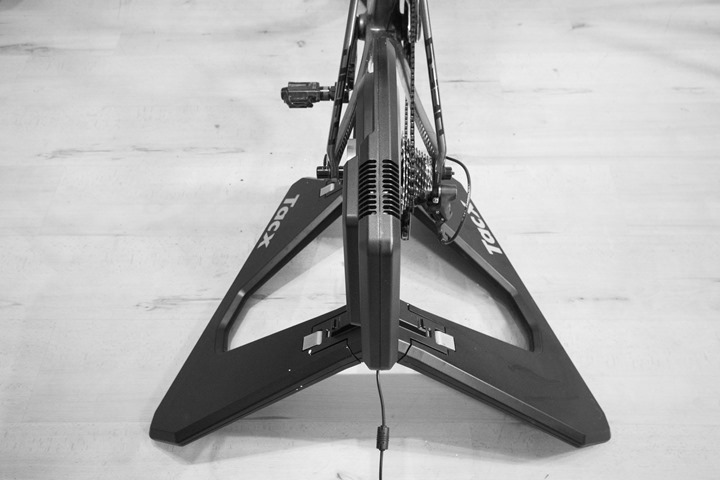 Wait, they weren’t done at making your life miserable by shaking your bike over cobbles.  No, you’ve now also got the ability to enable Isokinetic and Isostatic modes.  Or at least apps now have that ability.

I know, you’re now asking yourself: What the heck are those?  Is that like iodine?

No, it’s not.  Though both if used in excessive quantities can cause you pain in training.  Here’s the definitions of both:

Isokinetic Mode: This is used for training at low RPM with high wattages, but at a set speed. The trainer will keep you from accelerating above the set speed and thus force you at very low RPM’s with lots of wattage (which is typically tough to do on trainers).

Isostatic Mode: This is also for training, and forces you to apply even/constant force around the entire pedal stroke.  It’s really a bit of a mind-boggle when you try and pedal as it can be very difficult if you don’t apply even resistance the entire way around.

With these Iso modes, Tacx isn’t yet making them available directly to end consumers.  Apps however can leverage them today.  Tacx is working to figure out the best way to bring the new modes to their own apps in terms of training benefit, and they’re working with various coaches to sort that out.  But again, 3rd parties can use the API today to access these.

Also, Tacx has been rolling in various Neo firmware tweaks recently too, these include/add:

And finally, if you’re just buying a NEO, there’s been some minor tweaks along the way.  First was to resolve some initial quality control tweaks last fall (so those changes are way-old now), but also more recently they’ve adjusted the external case/shell on the NEO to be compliant with more bike frames.  There are no differences otherwise in those models internally and unless you knew what to look for on the shell, you wouldn’t likely be able to tell the difference.

Oh – and in case you’re wondering on future models from the company, Tacx says that they believe this is the most advanced trainer for the 2016-2017 season (either from them or the market at large).  While we have yet to see what the rest of their competitors bring to market at Eurobike in late August, it certainly stands to reason this will certainly be one of the top trainer for consumers – if not the top model.

[Note: My ‘Everything you want to know about the Tacx NEO post can be found here.]