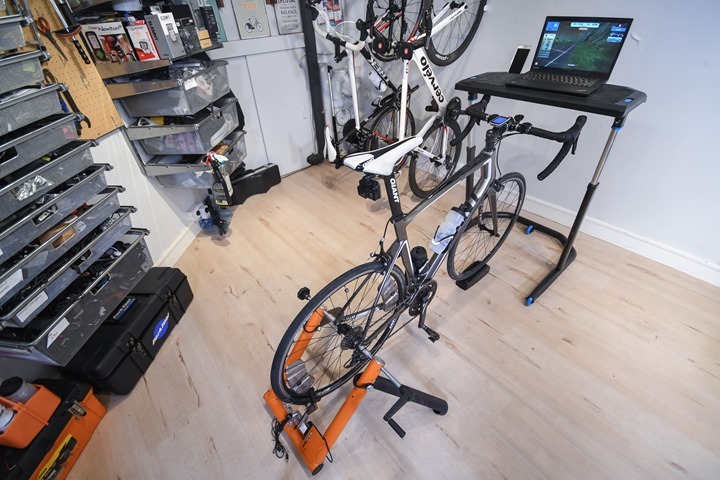 As many know, when it comes to crowd-funded projects I have a very high level of skepticism.  Mostly because most of them overcommit and under-deliver.  They may have great ideas, but executing on those ideas often gets muddled once you add in complex global design, manufacturing, and distribution elements.  It’s a core reason why I rarely write a post on a crowd-funded project unless I’ve touched it with my own hands.

This time though, I’ve done one better: I’ve actually used the darn thing for almost a month now.

This morning a small company from Canada launched their first trainer product – the STAC Zero trainer.  This trainer makes no sounds whatsoever.  It’s 100% totally silent.  Though, more on the details of that in a moment.

Not only that, it’s reasonably priced, has ANT+ & BLE, and will be (theoretically) available by the fall.  Let’s dive into it! 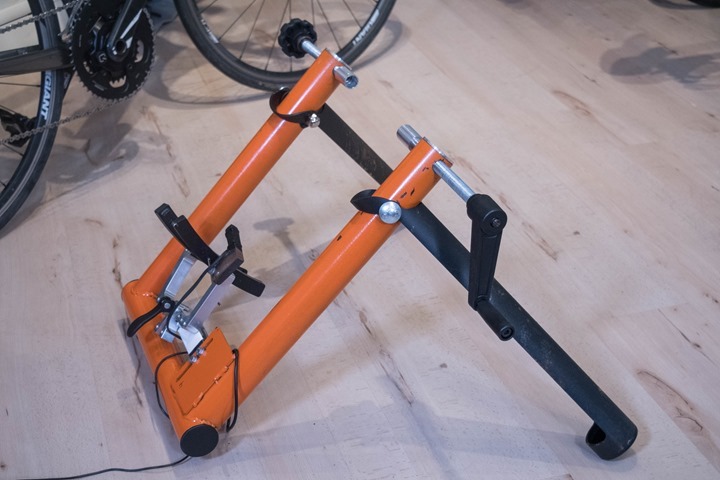 The trainer frame looks very similar to most other frames on the market.  Except that it’s construction cone orange.

Now this is a good time to note that the unit they shipped over as a loaner to me was a prototype.  As such it doesn’t have any of the final finishes you’d expect (in the looks department).  Also, between La Poste and Canada Post, they beat the @#$@# out of the package.  Seriously, it arrived with Styrofoam peanuts spewing out the bottom like a leaking burrito.  But don’t let the looks deceive you.

The way this trainer works is by using magnets.  Sure, many trainers use magnets, but those magnets have traditionally been used to provide resistance to a roller that your wheel touches.  When the wheel touches the roller it makes a sound.  Whereas in the case of the STAC Zero, the wheel never touches anything.  It spins freely in space.

On either side of your wheel’s rim are these two rows of magnets. 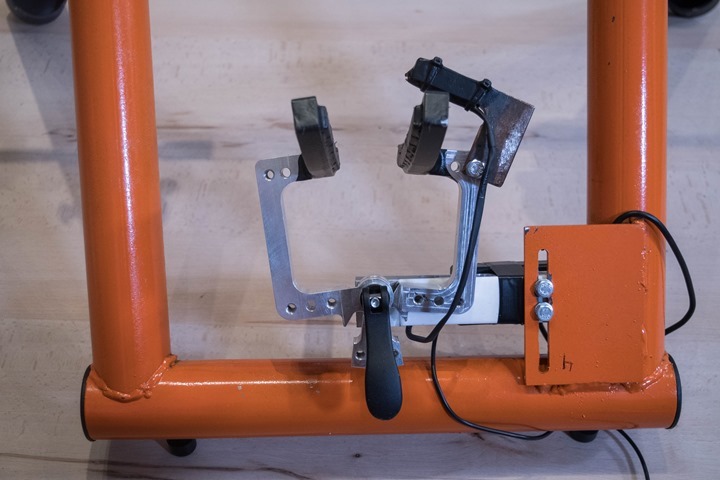 By placing them closely enough, they interact with the metal of your wheel’s rim causing resistance.  You’ll space them between 1mm-3mm from your rim.  Kinda about the same distance as brake pads might be spaced.  But unlike brake pads these neither move nor touch your wheel.  They can be adjusted using the clamp at the bottom. 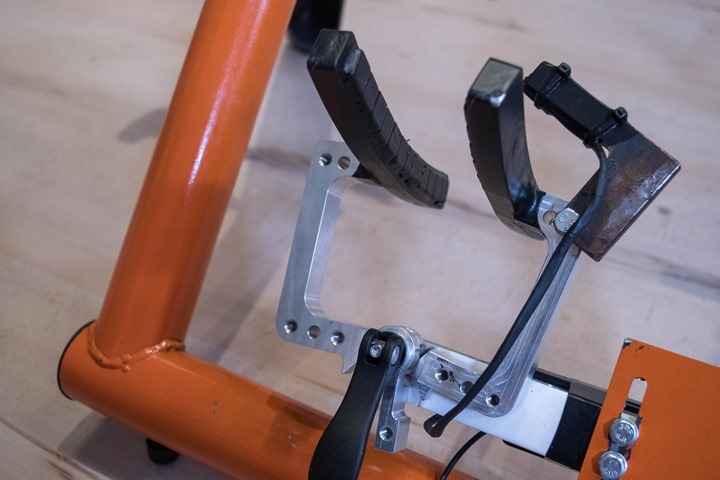 Now this trainer doesn’t allow you to set the resistance level, as a computerized trainer would (i.e. the KICKR).  Instead, you’ll control resistance just as you would out on the road: using your gears.  You can however place the magnets closer to the wheel to get more resistance if you need it.  The company claims upwards of 2,000w of resistance power.  I’ve had no issues doing many sustained workouts in the 300-400w+ range.  Magnets be magical, folks. 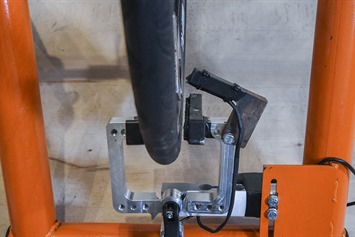 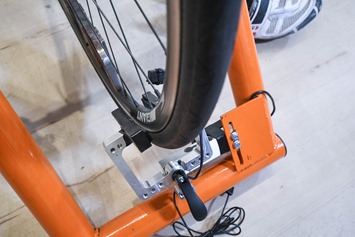 However, as magical as magnets be – they won’t work on fully carbon wheels.  So you’ll have to dig your non-fancy wheels out of the garage.  Note that wheels that have an alloy braking surface though are good, even if the rest of the wheel is carbon.

To your wheel you’ll add two weights.  Those are the big metal things you see there on my real wheel.  They effectively act as a flywheel.  Since your normal wheels have very little weight to them, this gives them some bulk which better simulates a road-like feel. 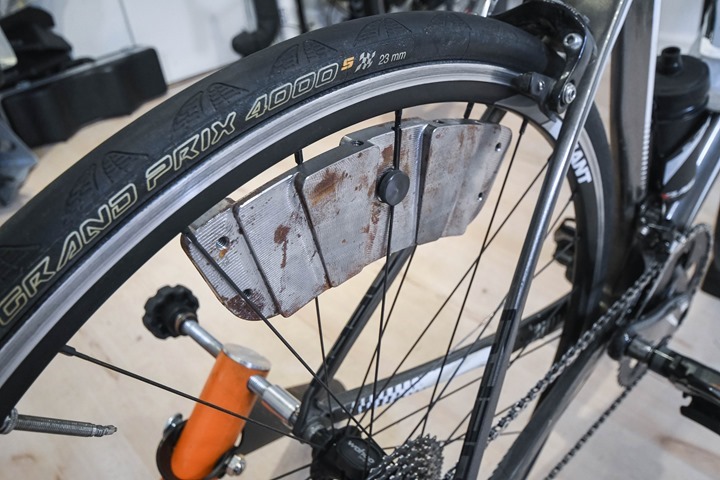 To attach them you simply use the single screw.  It takes perhaps 15-30 seconds to put both of them on your wheel.  Less if you get efficient at it.  Also remember that like the trainer, these weights on the prototype unit don’t have the final coating/casing on them, so they look sketchville. 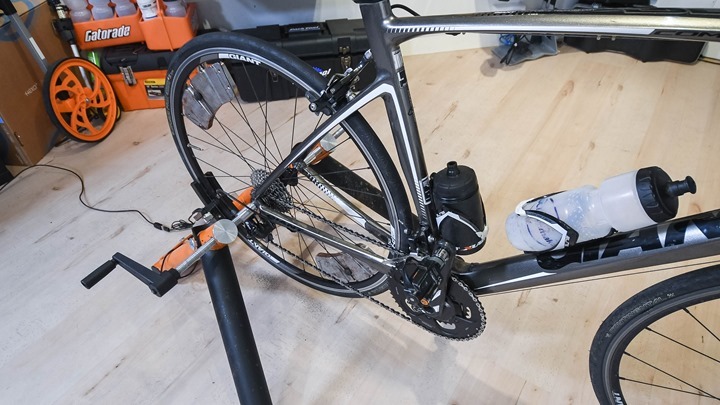 You’ll note I mentioned earlier ANT+ & Bluetooth Smart compatibility.  There are two versions of the trainer, and the more expensive version includes a small pod seen at the back.  This small pod tracks a magnet on your wheel (standard speed magnet) and is able to then determine both speed and power.  It then broadcasts that over ANT+ & Bluetooth Smart, allowing you to use it with your Garmin/Polar/Suunto/whatever device, or with apps (i.e. Zwift, TrainerRoad, Kinomap, etc…). 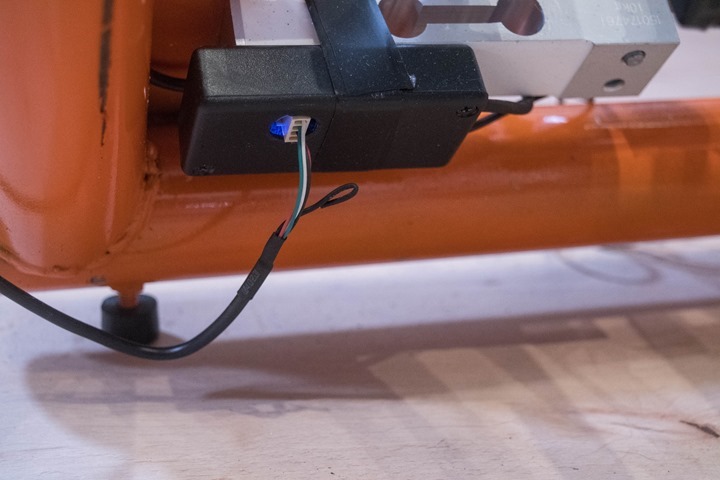 In the final version of this pod, it’ll simply use two AA batteries, which will give it a few hundred hours of battery life.  In my case I used a USB cable to power it.  But the final battery design means that this trainer will work great for warm-ups where there isn’t a power outlet (race starts, middle of a hurricane, meat locker at a butcher). 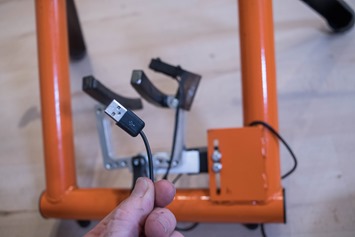 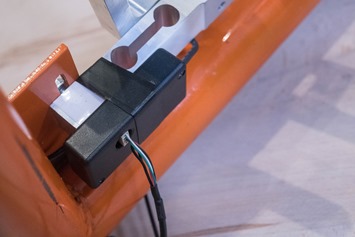 In my case the power pod got damaged during shipping, and thus wasn’t transmitting power values (but was recognized by the Edge unit).  They’re looking to send over a more final looking pod down the road to try out.  They noted they’ve been getting within +/- 2% accuracy of a PowerTap power meter wheel they’ve been using, in terms of power accuracy.

I asked if there was any calibration or roll-down required to achieve accuracy each time, especially if you moved the magnets. They explained there was no need to do any form of calibration:

“That’s definitely a good question about the magnets, and I’m sure you won’t be the last person to be asking it!  Since we’re not calculating power off of a power curve, but calculating it directly from the measured force on the magnet array and wheel speed, it means that the magnet spacing doesn’t actually matter.

If you go right back to the equation for power, the power at any time is given by force x speed.  Suppose a rider is outputting a constant 150W, and we’re trying to measure it:  With the magnets close, the magnet array might have 30N of force on it, and a wheel speed of 5m/s.  With the magnets far, the magnet array might have 15N of force and a wheel speed of 10m/s.  Even though there are different wheel speeds and forces, the power output is the same.  Since we’re measuring both parts of that equation many times per second, we can calculate power frequently and accurately.  This actually means that you’ll be able to adjust the magnet spacing mid-ride without greatly affecting accuracy!

The reason that we’re able to do this and other trainers can’t comes down to the design of the resistance unit.  Because we aren’t pressing a roller onto the tire with hundreds of pounds of force, the reaction force on the magnet array (which is equivalent to the force acting on the wheel, exactly what you feel while pedaling) is very clean and easy to measure, while the force on a typical fluid trainer would be just about impossible to separate from the press-on force required to keep the tire from slipping.”

Finally, the whole kit folds up easily and can slide under low-clearance objects (like a couch).  In my case the earlier clamps didn’t fold yet, but the current prototypes seen in their Kickstarter photos do. 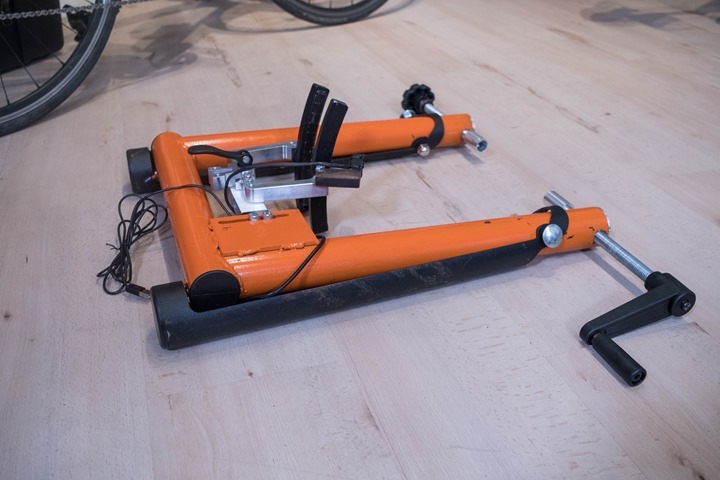 I also found it pretty light; far lighter than something like a KICKR or CompuTrainer which have heavy frames and flywheels.

Video – How it actually sounds: 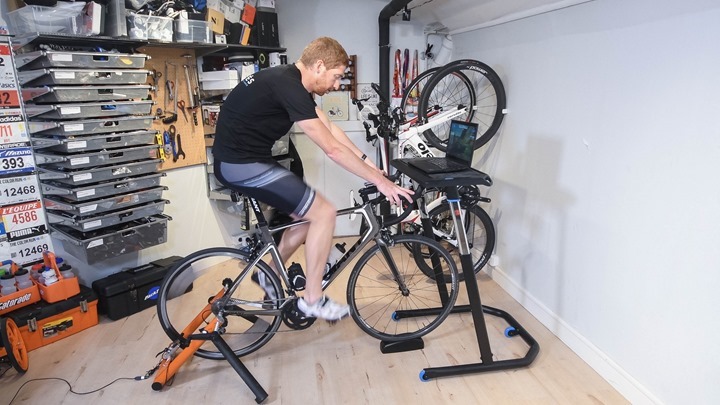 So, remember I said it’s silent?  Well, that’s definitely true.  The only piece that touches your bike is the clamp that holds your bike to the trainer, and that produces no noise at all.  However, there will be some noise from your bike itself.

And the level of that noise will be a direct indicator of how good a bike mechanic you are.  The cleaner you keep your bike, the quieter it is.  After all, you still have drive train noise – which is simply the sound of the chain going around and around.

The loudness of that noise varies tremendously on how clean your chain/cassette/chainrings are.  Like – massively varies.  Even the simple act of adding chain lubricant will dramatically drop the sounds there.  For most people though, they’ve never heard the sound of their drive train without the added wheel sound.  Even trainers like the Tacx NEO and Elite Real Turbo Muin B+ have much more noise involved because there is still a flywheel or other gearing elements spinning around.

To demonstrate all of this, I put together a bit of a video.  A portion of it covers the basic overview of the unit, while the sound volume pieces starts around the 5:00 marker.

As you can see, the only noise you hear is just the chain.  In my case I used a chain cleaning tool first, and then used a bit of lubricant.  All told I spent 5-10 minutes to clean it.  Obviously I could have spent more, but I’m lazy. 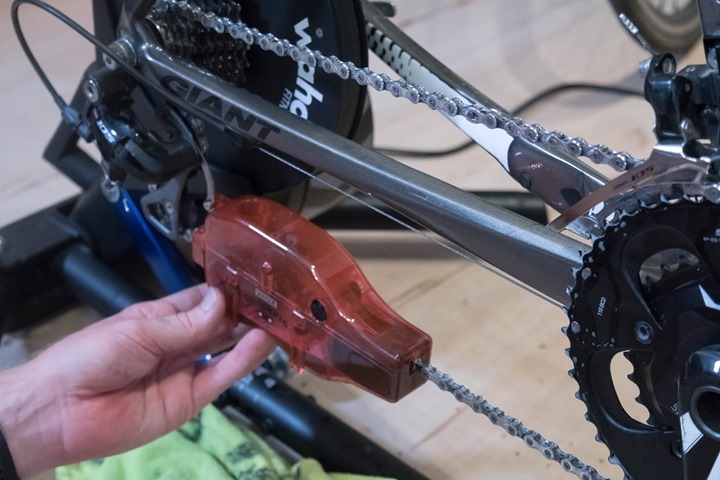 Of course, many people will also have a fan turned on – which will increase your total ‘Trainer Experience’ sound levels.  But STAC Zero lacks any of the low rumble that even the quietest trainers on the market have 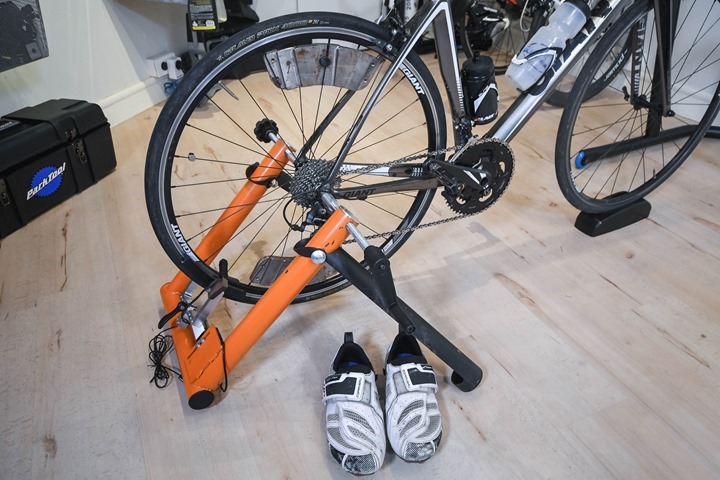 The STAC Zero trainer is on Kickstarter as of this morning.  Like most projects they have tiered pricing based on when you jump in.  Early bird catches the worm and all that.  Assuming you weren’t an early bird, then there’s two basic levels available for mass consumption:

If you are/were all early-bird, then you save upwards of $100CAD off those prices.  As noted above, since the company is Canadian, the prices are in Canadian dollars. With the current Canadian dollar being as it is, it’s roughly equivalent to one radish and a bottle of maple syrup.  So you’ll save a bundle if you’re in the US/Canada.

All of these are slated to ship this fall (October/November 2016).  However, some shipments won’t ship till January if you wait too long to order.

Looking at their timelines, I think they’re doable…but tight.  Right now their tech is solid.  That’s not going to be their issue.  Their main challenge will be manufacturing.  However, they’re doing a good thing by manufacturing within Canada, which will reduce timelines and shipment costs significantly.  It’ll also give them far easier control than going to Asia.

All that said – the design is pretty darn cool, and the price point is very solid.  I suspect this trainer will sell very well going into next fall, especially if they can find a way to ensure timelines have trainers landing in people’s hands in October.  If they slide to January, that’ll be a huge hit for both the company and consumers.

With that – thanks for reading!  Feel free to drop any questions down below.