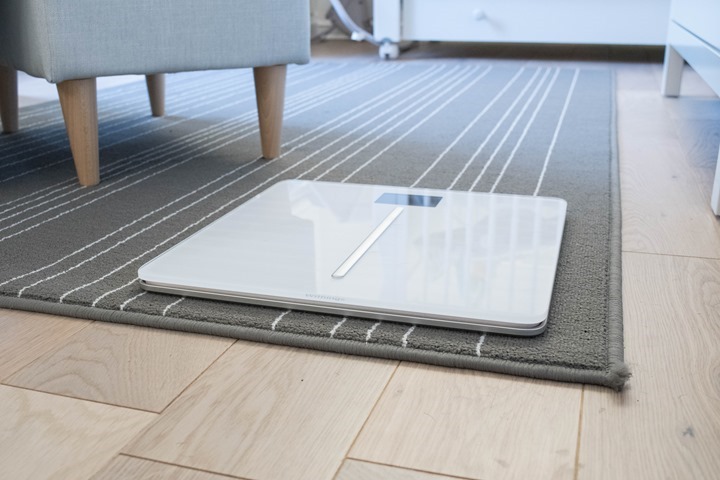 Update: My Full In-Depth Review for both the Withings Body and Body Cardio scales can be found here!

Today Withings released their WiFi scale, the Withings Body Cardio along with the new Withings Body scale (sans-Cardio).  Like all past Withings scales, these units connects via WiFi to your home network (after Bluetooth Smart configuration with your phone).  However, it kicks things up a notch in the data stats department by adding in a number of additional metrics beyond just weight and body fat.  These new metrics being: water mass, bone mass, and the mysterious sounding Pulse Wave Velocity on the Body Cardio scale.

This is all in addition to the existing standing heart rate value they’ve had on their higher end scales before (kept on the Body Cardio, but not base Body scale).  However, in addition to these new features, they also removed a couple of things: room temperature and CO2 measurement.  Apparently the company agreed with folks that these had practically no real-world value.

Plus, there’s some cool tricks up the scale’s sleeve when it comes to floor surfaces.

I’ve got a unit here that I picked up at the Withings HQ yesterday, so it’s only been on my floor a rather brief time period.  So I’ll do a full in-depth review sometime later this summer (I will need more time, as pulse wave velocity really requires a long timeframe), but in the meantime this post serves as a bit of a placeholder. 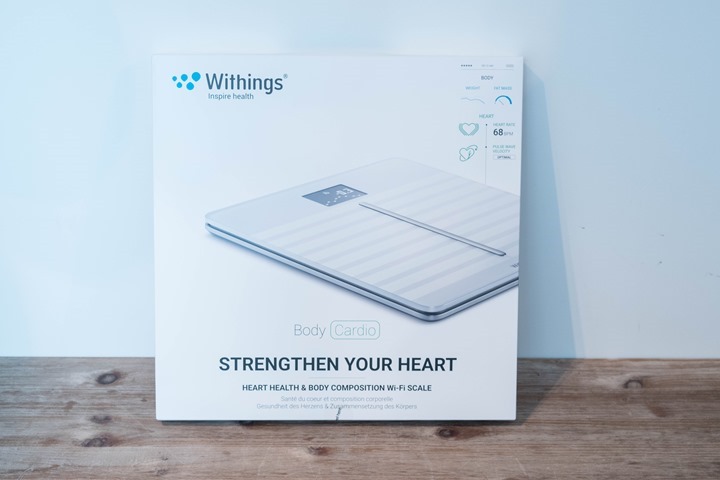 I think the Body Cardio scale might be the thinnest scale box out there.  It’s surprisingly small. 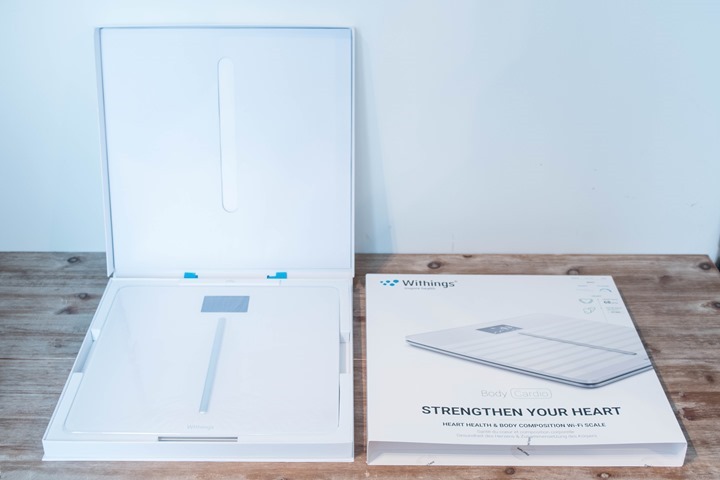 One reason it’s likely so small is that it lacks having to package a bunch of feet with it.  That may sound trivial, but most feet are about half the height of a scale, so basically you’re significantly increasing your scale packaging.  Aside from a brief quick-start guide, the only other thing in the box is the micro-USB cable. 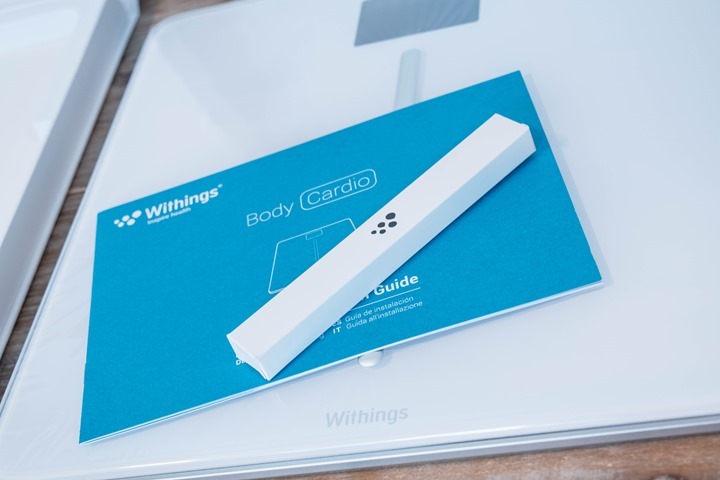 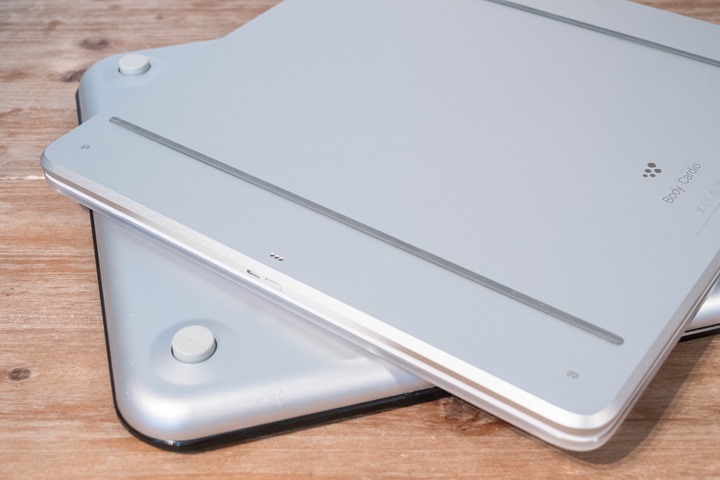 Now why does the lack of scale feet matter?  Well most scales need additional plastic feet on them if you’re using them on carpet (even Withings’ past WiFi scales).  Whereas the new Body Cardio doesn’t need such feet.  It’s bi-flooring.  It can go back and forth between hardwood and carpet flooring.

You’ll notice that the scale doesn’t have a battery compartment for AAA or AA batteries, likely further shrinking the depth of it.  In this case it uses a rechargeable battery.  The company says you can charge it once per year, just using the simple included standard micro-USB cable: 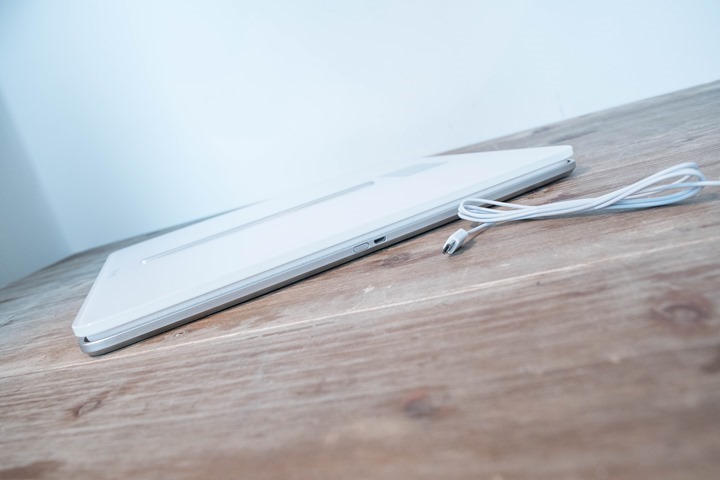 Once you’ve selected a final resting place for your scale you’ll go ahead and get it all setup.  The process only takes a minute or two using your smartphone.  The phone will pair via Bluetooth Smart first, and then it’ll configure the WiFi settings on your scale. 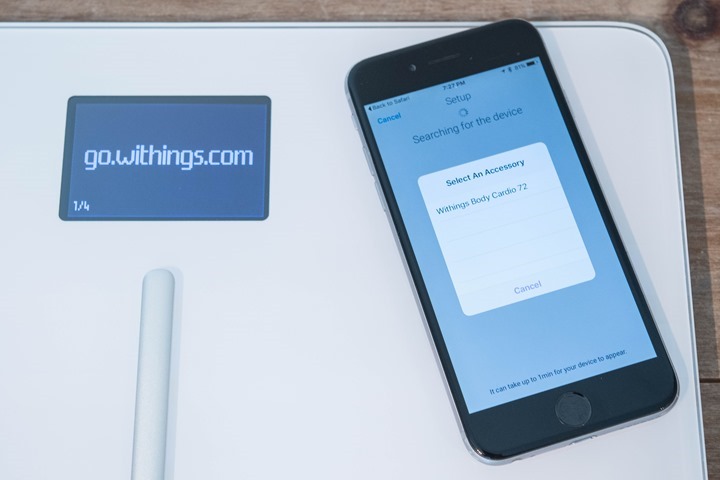 Following the smartphone configuration, everything then happens via WiFi on a day to day basis.  So as you step on the scale it’ll connect to the Withings backend service via WiFi and then pull down user information.  You can have up to 8 people use the same scale, and it’ll allow you to select which person you are (if it doesn’t figure it out automatically).  That enables the scale to not only track individual metrics, but also gives you correct data around things such as BMI, which requires height. 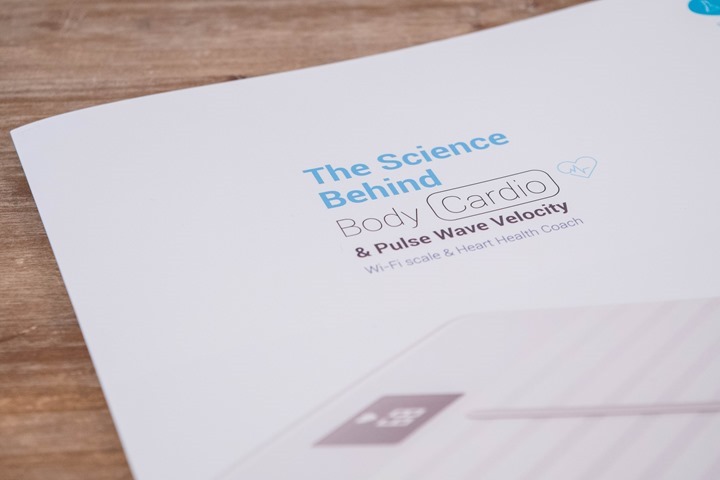 So let’s talk about what’s happening here after you step on the scale.  First screen will be your weight, just like it would have been on past scales. 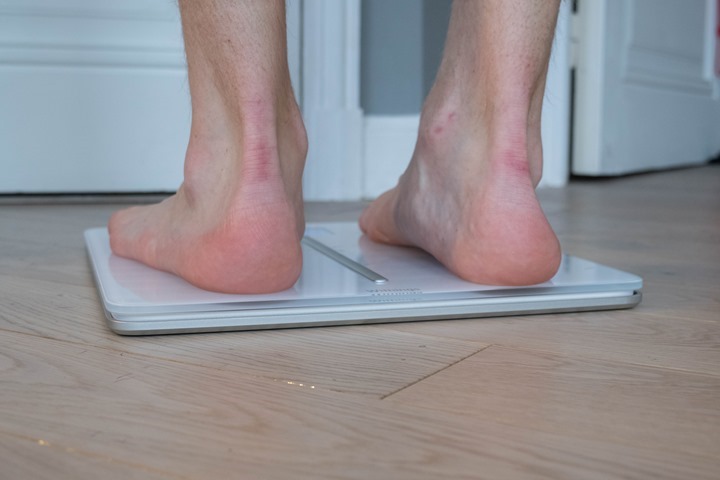 Within a few seconds it’ll show you your weight, and then ask for your name.  It does this so it can determine body fat. 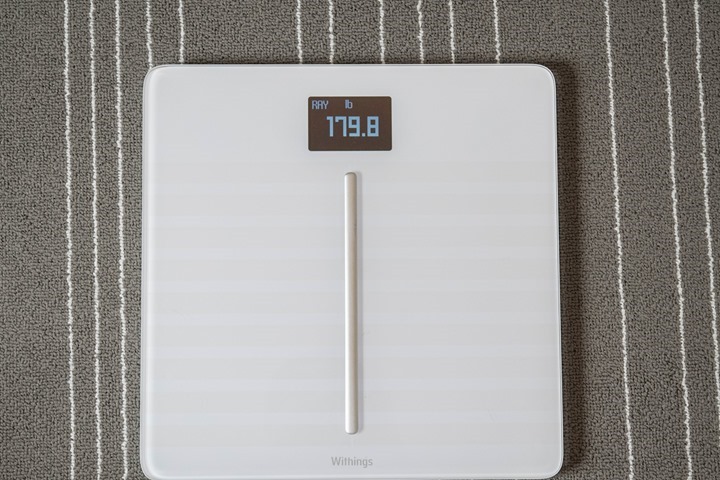 Following that you can get your standing heart rate.  Now I’ve repeatedly noted that I think this is a hugely worthless metric, because the variability in measuring standing HR can be swayed 10-30bpm simply in a few seconds depending on what you were doing just before stepping onto the scale.  Were you walking from the bed?  In the shower?  Taking a dump?  All of which can and will impact standing HR to the point that any trending on that data is a mess. 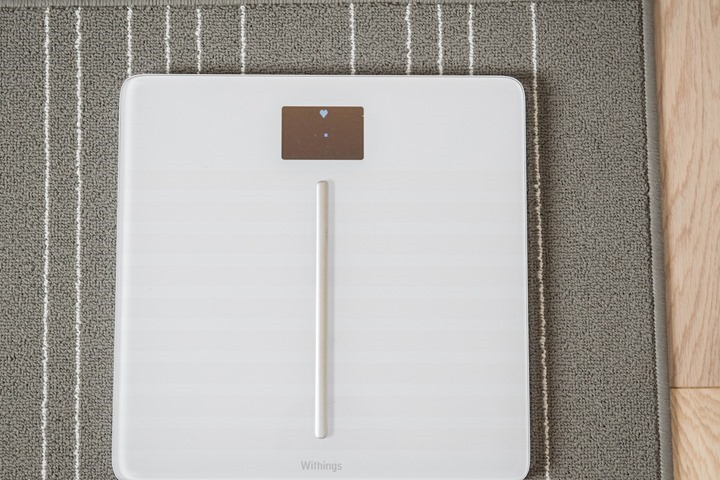 Next, it’ll go ahead and display additional body composition metrics: Bone mass, muscle percentage and water percentage.  It’ll show all of these immediately. 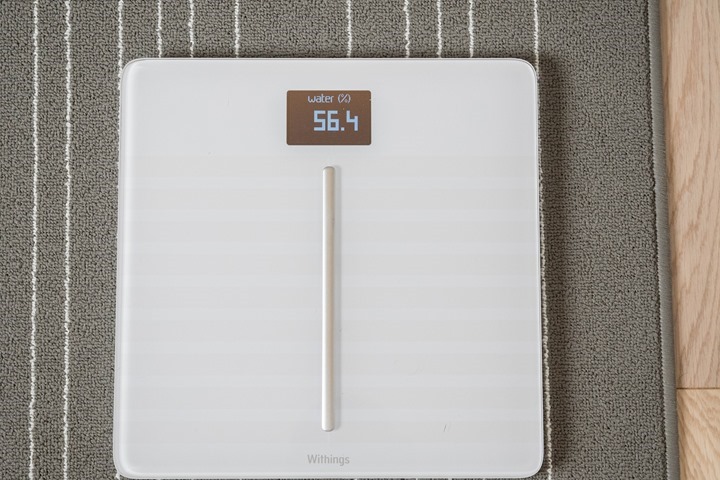 In the box you’ll also get any trends that you have: 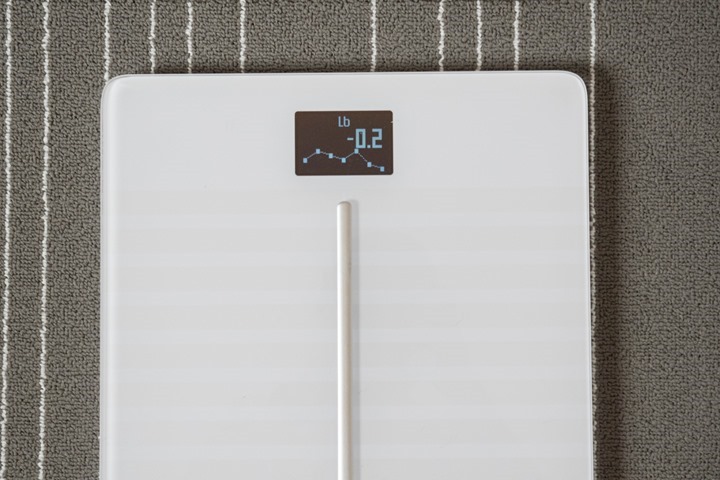 Finally, you’ll get the weather forecast for that current day, along with the steps you had for yesterday.  Steps will be shown for Withings step counter devices (like the Withings Activité activity tracker).  Though Withings is cool in that if you forget your Activité tracker you can ask it to populate the step data using your phone’s internal step tracking data.

The weather data, Withings argues, is there because they’ve found that when people make a pattern out of something (such as stepping on the scale in the morning), they’re more likely to do it again.  By giving you the weather for the day, the logic is that you’ll step on the scale to get the weather to decide which clothing you’d wear that day.  To be fair, that logic is pretty….logical. 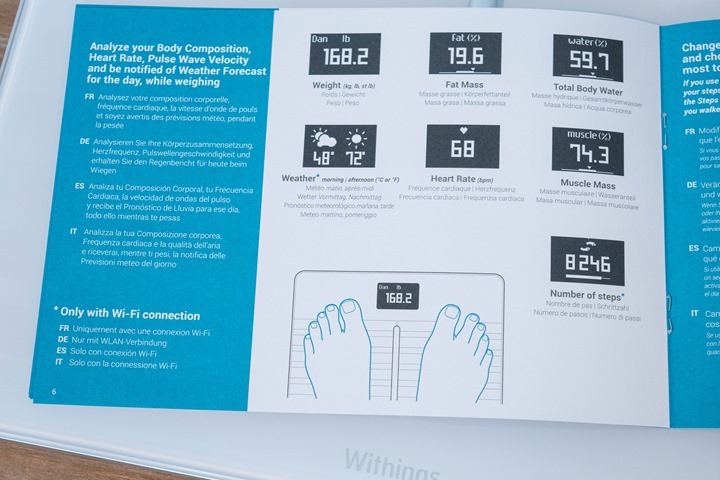 For whatever reason, the backend service seems to be a bit slow this morning for weather/steps, so I can’t quite show a photo of that yet.

So what about pulse wave velocity?

Well, it’s kinda complex.  But at a high level, it’s “the speed of the wave generated by your heartbeat along your arteries”.  Here’s an image that Withings put together: 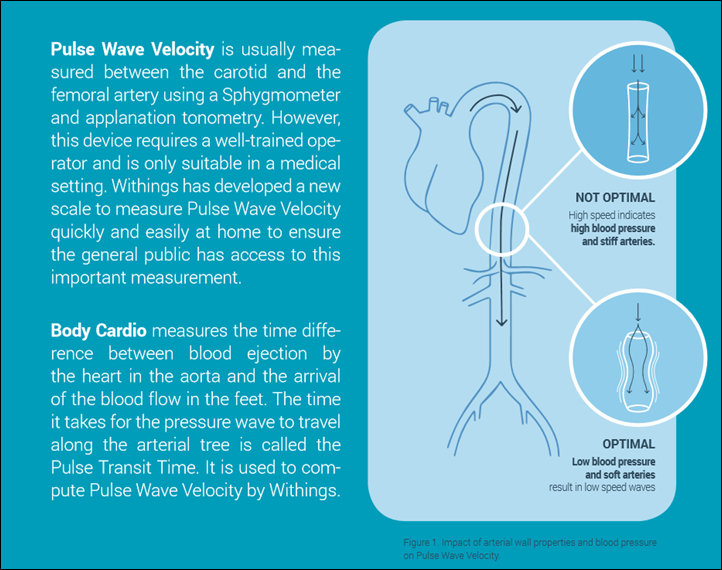 Withings will take about 15 seconds to measure this value, as it’s timing how long it takes for the blood being ejected by the aorta to reach the vessels in the feet.  The slower this happens, the healthier you’re getting.  In theory anyway.  Note that traditionally measuring this takes at least 20 minutes with a bunch of medical gear.  So it remains unclear at this point how accurate the measurement really is, beyond the study Withings did with 111 people.  Also, Withings isn’t calling it a medical measurement.

Once the scale measures this, it plots it onto graphs that you can see within the app.  Thus allowing you to trend more easily. 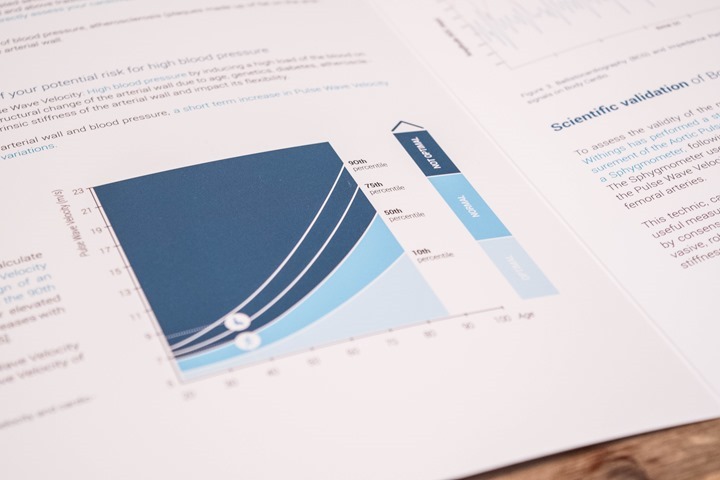 So is this metric actually meaningful?  Well, that’s tough.  Most times companies toss in fancy metrics, it’s little more than marketing jazz.  Companies in the space do this all the time.  The majority of the time there’s absolutely no studies behind it, it’s just thrown out there like someone throwing out ideas for lunch.

That’s what Withings has done.  They had a medical team at a nearby hospital measure 111 people comparing the pulse wave results from the Withings Body Cardio scale to that of a traditional sphygmomanometer.  That produces the below chart (to the right), which Withings describes as “good correlation”.

On one hand, one has to remember that Withings paid for this study and controlled whether or not the results were released.  They also haven’t released the full data from the study to allow more concrete analysis.

Yet on the other hand, they’ve already backed up their claims with a heck of a lot more data than most consumer sports/technology fitness companies do.  At least they made an attempt at it.  Hopefully some university or other medical facility decides to do a study on their own, without Withings funding, to see if the data can be corroborated.

I’ve uploaded the intro PDF here, and the slightly more detailed pulse wave velocity PDF here. Both are obviously provided by Withings.  Note there are a slew of medical study references at the end of the second PDF.

Now one exceptionally odd thing is that the new Pulse Wave Velocity metric isn’t actually shown on the scale, but only on the app afterwards.  I can see how it might need to pull data from the backend service to make a determination, but since it does that for steps anyway – it would seem like it could wait a few seconds and then show you that data.  After all, that’s why you buy the scale.  Odd.

Also, it takes about 5 measurements worth of Pulse Wave Velocity before you start getting any trends.  Thus with only having the unit for 24 hours, it’s too soon for that for me.  Check back in a week or so and I’ll let ya know.

Finally – note again that the Body Cardio has Pulse Wave Velocity and standing HR, but not the new Body scale (that’s the cheaper one at $129). 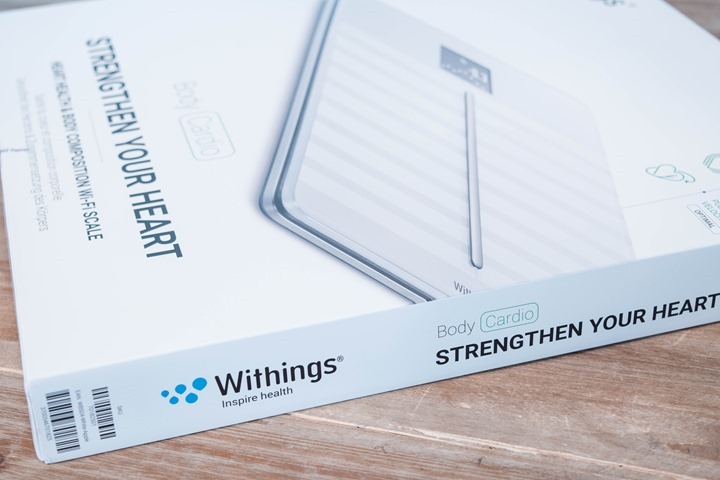 So is it worth the $179 for the Body Cardio scale?  Well, it’s probably a bit too soon to know.  In general though, you’ll remember I’m not a huge fan of additional scale metrics beyond just simple weight.  I think most people will get what they need from weight, and that metrics like body fat and others are far too easily influenced by other day to day factors (like going to the bathroom or a workout).  You can typically get them semi-consistent if you take them at the same time each day, but as I’ve shown previously, they don’t tend to be super accurate.

However, the real strength of the Withings WiFi scales is their platform.  Or rather, their connectivity to 3rd parties.  They’re incredibly open when it comes to getting that data to other partners (i.e. MyFitnessPal), more so than any other company.  In many ways, the Body Cardio scale is a shot across Garmin’s bow and their Index Scale, since both are high-end body composition scales featuring very similar metrics.  And at $129, the new Body (non-Cardio) essentially has all the same features as the Garmin Index scale that sits at $149.  It just lacks the Pulse and HR action of the Body Cardio.

So, if you can’t decide yet – check out my post from this winter on choosing a WiFi connected scale.  It might give you some insight into the market, as well as what features and functions really matter.  I’ll be adding in the Body Cardio scale shortly, so you can also compare that soon in the product comparison tool.

With that – thanks for reading, and stay tuned for more!

Update: You can now order the Withings Body (that’s the $129 variant) from Clever Training. Plus, you can use DCR Coupon Code DCR10BTF to save 10% and also get free US shipping.  All of which supports the site here. Meanwhile, the higher end Withings Body Cardio scale will be available on July 1st via Clever Training. Thanks!