I’ve always wanted to do some sort of comparison test between many of the consumer scales that are out there today that measure both weight as well as body fat against one of the more expensive options such as the Bod Pod or hydrostatic dunk tanks.  Both of which are generally considered to be amongst the most accurate methods out there.

However due to my crazy travel schedule over the past year it’s been tough to fit it in and get everything scheduled with a group of folks.  But one evening last week I managed to round up a group of nearly 10 folks to join in the testing fun.  As part of the testing we’d be recording a huge number of data points, from a variety of scales.  On the block for these tests were everything from cheap $20 scales from Target, to the $279 Tanita BC1000 ANT+ scale and $150 Withings WiFi Scale.  Here’s the full list of scales tested:

And then of course, we have the actual Bod Pod itself.  This first post I’ll focus on what the Bod Pod testing includes, and our test group, and then the second post I’ll dive into all the nitty gritty numbers.  Sound good?

Since most of you reading are interested in seeing the results of athletic folks like yourselves, that’s who makes up the test sample.  Everyone brought in is an active endurance athlete – triathlete or cyclist.  I brought in about half the folks, and then CycleLife had a handful of their triathlon team guys show up as well.  All in we had 9 folks tested, includes both guys and gals.

Speaking of the venue – CycleLife in Georgetown (DC) was cool enough to do all these tests free of charge to help me write this post, which is pretty darn awesome. 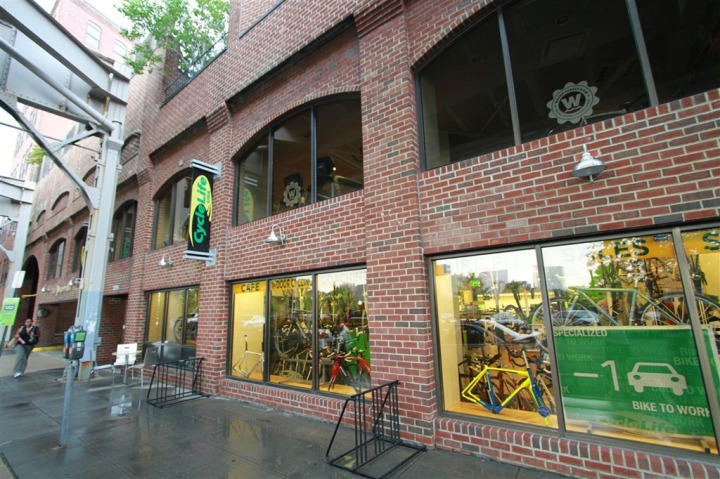 Once we arrived, we found the test room where the egg shaped Bod Pod was awaiting us in the corner.  In and around the room was a slew of other equipment that I’m reasonably certain would cause pain.  But it was thankfully unrelated to our tests. 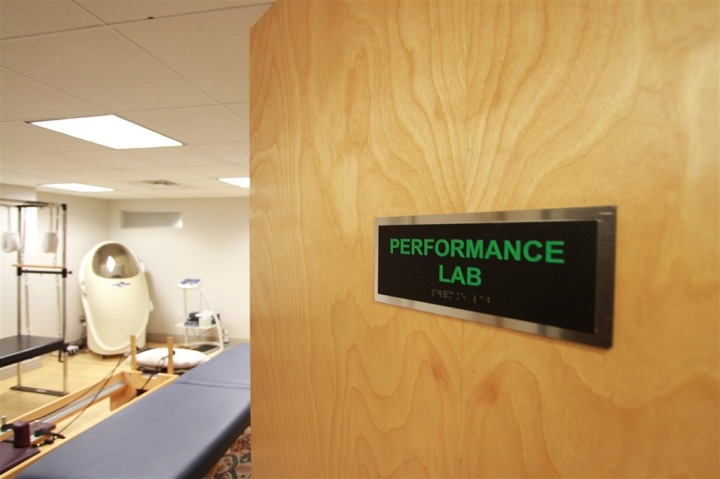 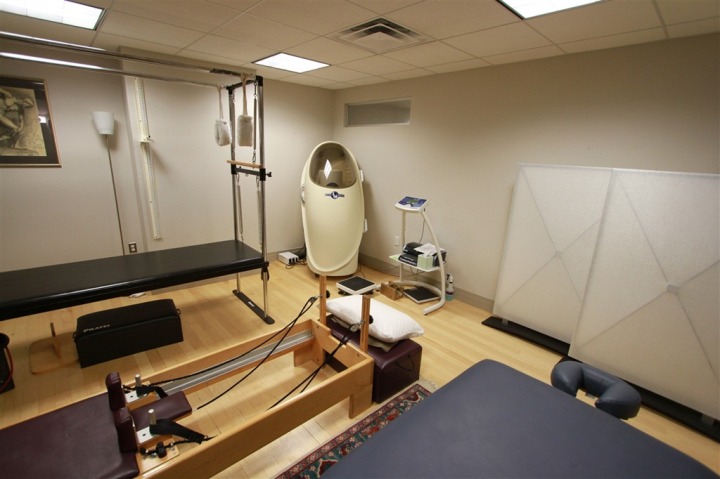 The first step was to get the whole assembly line of scales setup, which included all five scales that I brought in: 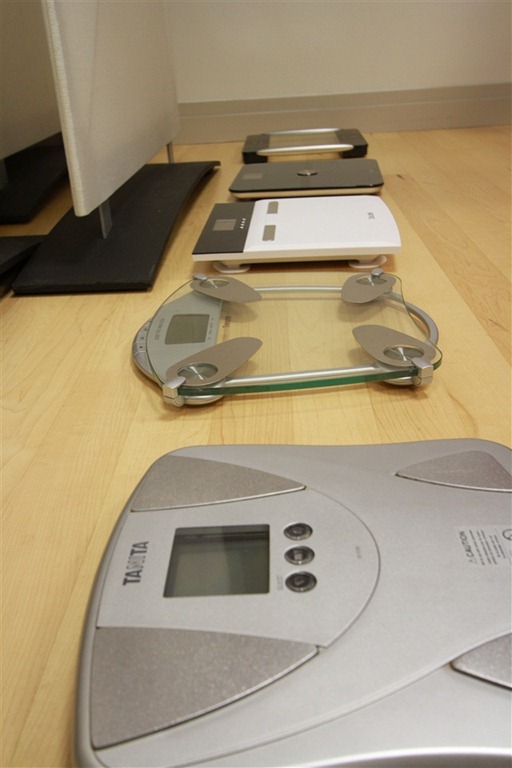 Each one of the scales (both consumer and the Bod Pod) had to be individually configured with the persons height and age, as well as set to athletic mode (if applicable).  For the consumer scales, we also tested a few folks in non-athletic mode as well just to see the differences.  The Girl did most of this scale configuration. As each person came up we had their height and age ready to go, and she would manually configure it as they stepped up to the scales – double checking all of the settings and records we had written down for each person. 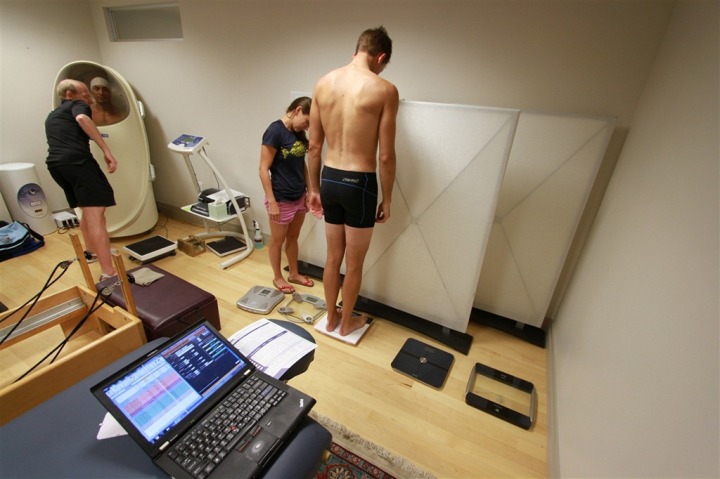 Some of the scales required this be configured via computer – so I had my laptop there to configure both the Withings WiFi Scale as well as the Tanita BC-1000 scale.  From there we recorded all the measurements into a giant spreadsheet – well over 200 measurements in total. 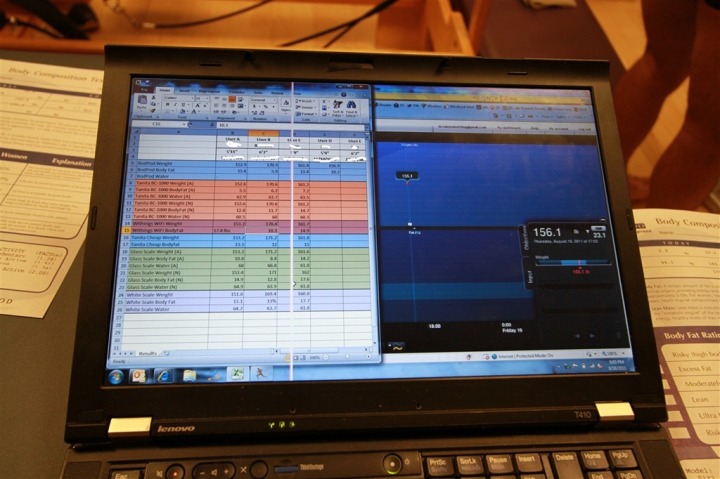 It didn’t take long for the place to become packed with people either in swimsuits, or just out of them – like a bunch of swimmers looking for the pool in the wrong place. 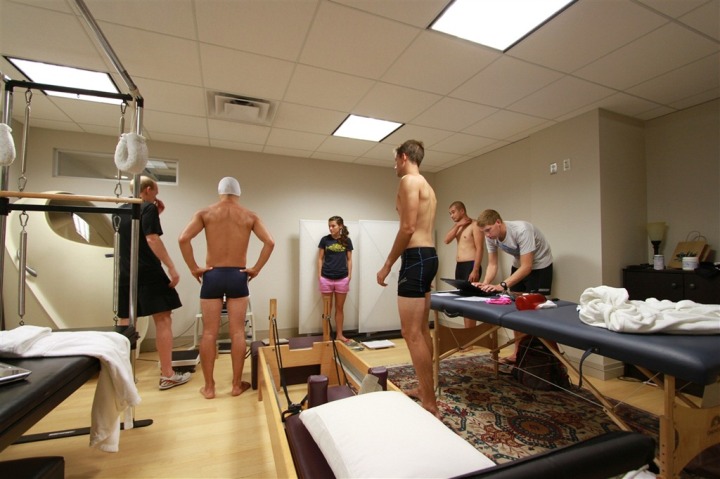 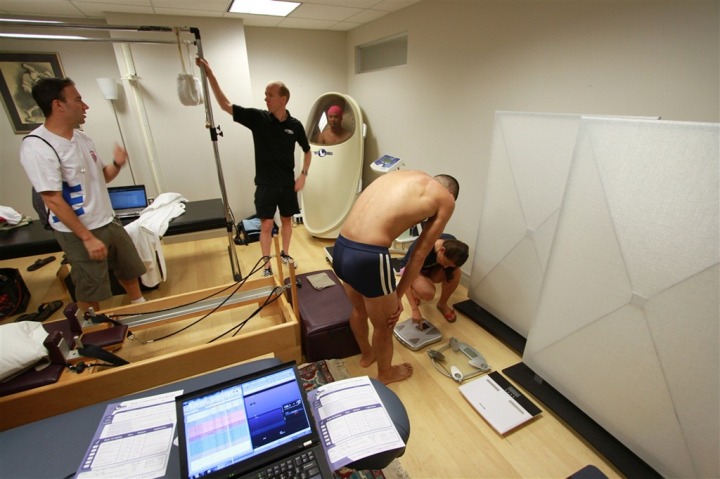 Now that I’ve covered the basics of our process let’s get to the Bod Pod piece and talk about that a bit.

There’s two major components here, first is the scale – which you simply step on to determine your weight: 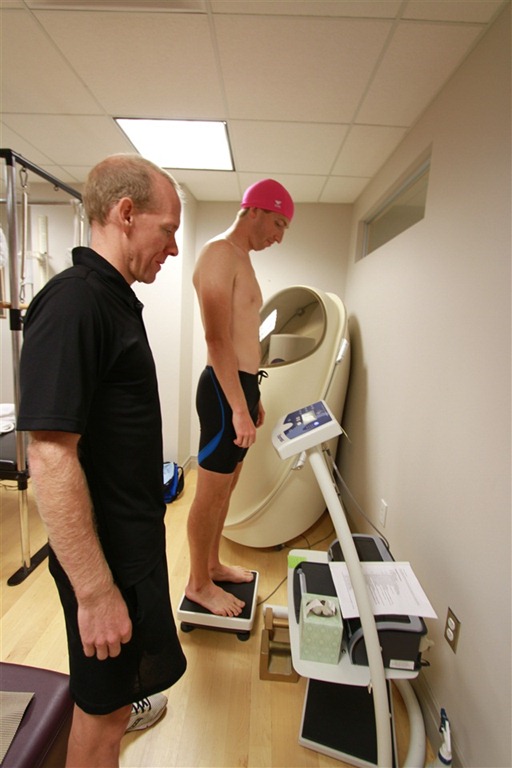 The scale is calibrated using these blocks with a known weight.  This helps ensure the unit is accurately measuring each and every time. 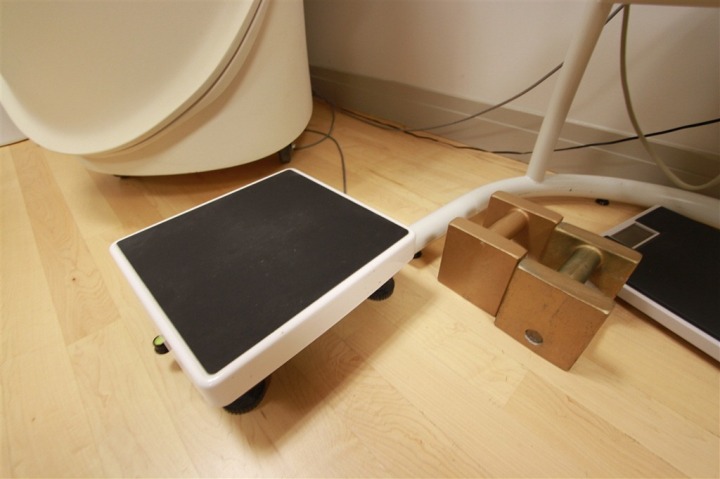 Next up, we have the pod that you sit in.  This is the egg looking thing.  This unit works by measuring air displacement after introducing what is effectively a small pressure wave within the chambers from the diaphragm unit behind your back.  As it introduces these vibrations it measures the magnitude of the pressure changes between the two chambers to determine volume. Once volume is determined, you can use the known mass (from the scale) to determine density. 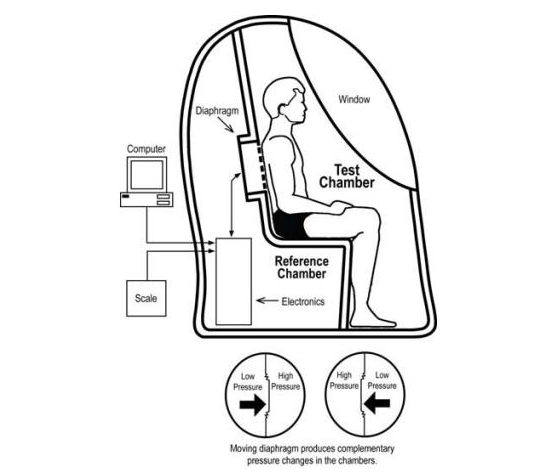 (Picture from: Florida Fitness Testing Q&A on how the Bod Pod works)

Like the scale, in order to ensure accuracy a static calibration object is introduced to the Bod Pod prior to the tests to ensure measurement is correct: 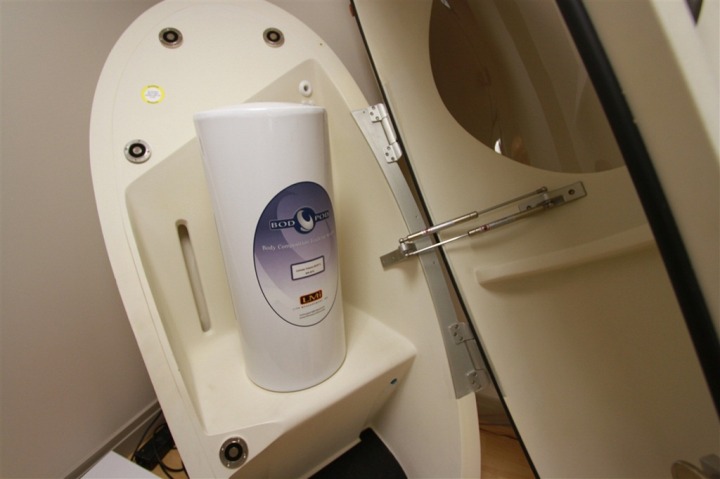 Once it’s your turn and you’ve weighed in on the standard scale the door will close and you’ll be ‘locked’ in. 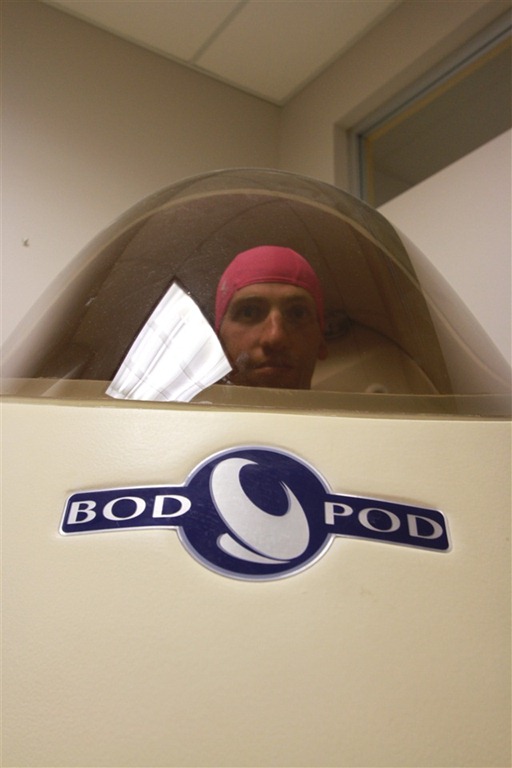 But fear not, if the world ends or a rogue earthquake occurs – you can always press the magic blue escape button to eject yourself from the capsule (or…it just opens the door). 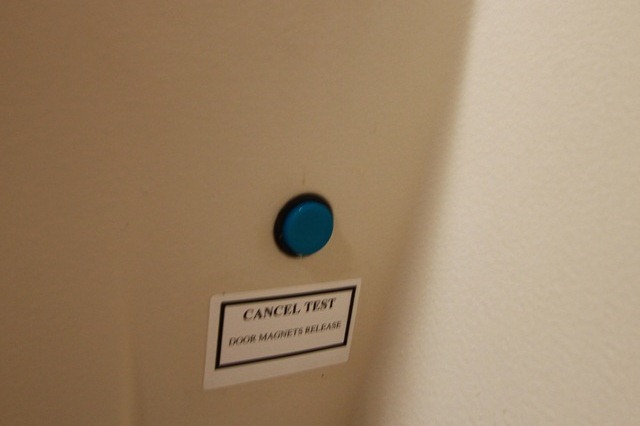 Once you’re inside the test simply involves you sitting and breathing normally.  You should be wearing no jewelry, and only a bathing suit – one with as little fabric as possible.  Once the test starts and you’ll hear a slick clicking sound and then a very faint vibration. 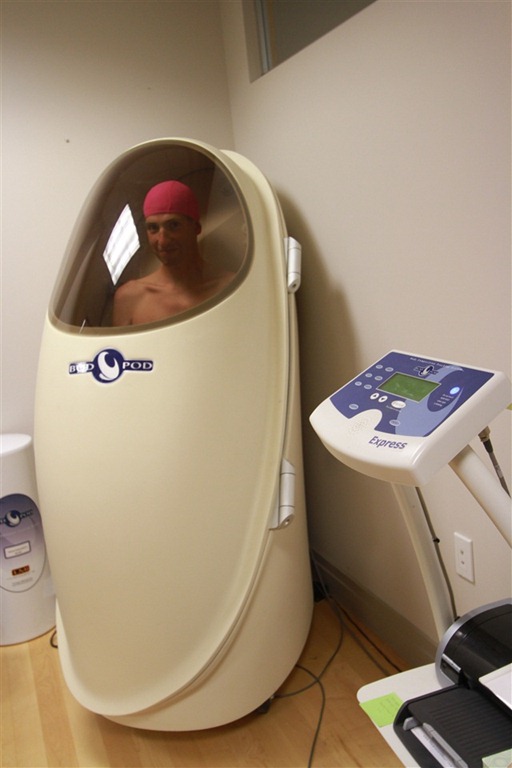 After less than a minute, the unit will pause and the door is opened and closed briefly to take a second measurement.  Then the process repeats and less than a minute later of faint thumping and vibrations, you’ll be done and ready to exit the egg.  Test complete!

A few seconds later the printer will spin up and pop out the results of your test, which look like below – listing your body fat percentage as well as weight and body fat in pounds (up at the top, slightly fuzzy). 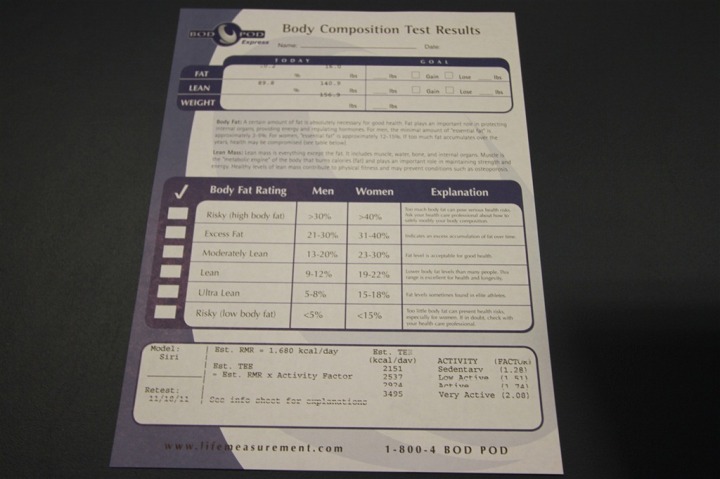 Fear not though, in part two you’ll get all the data for everyone.  In that piece I’ll get into all the results of the tests and some of the rather interesting trends that developed over the nine folks and five scales (+ the Bod Pod) that we tested.  Good stuff!

Once again, I really want to thank the guys at CycleLife for all the help in testing.  And if you’re up for getting some tests done – I worked out a deal where if you mention my blog you’ll get 25% off their testing (nothing goes to me, it’s a simple discount for all my readers).  I love giving exposure up local community bike shops like them, so if you’re in the DC area (or just visiting) – give them a shout.  More on that at the end of Part II.

[Update Note, October 27, 2015:  Sadly CycleLifeUSA seems to have gone out of business about a year ago.]

On to Part II!