Whoa – it was a crazy weekend spanning two transatlantic flights, three countries, and a whole lot of busy.

1) Flew Back from US/Canada

After I wrapped up my run in Newark, it was time to head home back across the pond.  Unfortunately, I wasn’t very tired, so I was up the entire night.  Me and the little moving map: 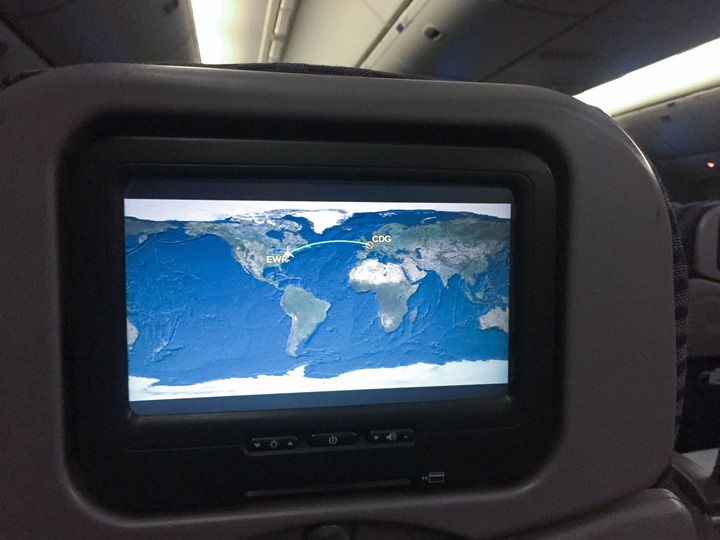 On the bright side, I got a lot of things done – so at least it was productive.  Regrettably, customs was about as bad as we’ve seen it in a while – taking about 45 minutes to clear.  Usually you luck out, but that morning…not so much. 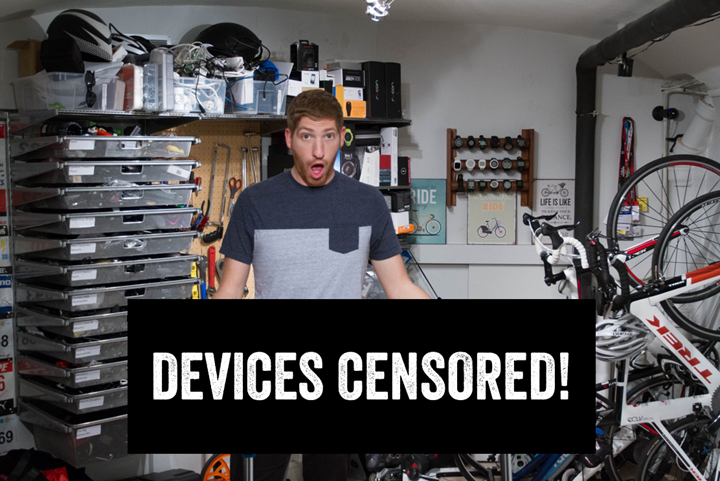 Most of my weekend was spent taking photos of products for CES this upcoming week.  When I do posts, they usually come together in one of three ways:

This weekend was mostly ‘C’ above, where I was writing and shooting at the same time.  I’d write a few sections of text, and then shoot it.  It’s more time-consuming up-front, but saves time later because I know I’ve got the exact shots I want.  When I’m done, the post is theoretically done (minus photo editing).

When you write text first and then shoot later, sometimes while shooting you find/discover things that you go back and re-write for.  So it often increases the iterations a bit.

Meanwhile, when you shoot first and then write later, you often end up wishing you had done more shots (sometimes possible, sometimes not).

In any case, I was shooting multiple products at once for multiple companies.  Unfortunately, since nothing is yet announced, I don’t have much to show here in this post for it.

As for the daylight aspect – I almost exclusively shoot outdoors and during daylight hours (with natural light).  Or when indoors, it’s near the large windows providing natural daylight.  The only shooting I do indoors with 100% artificial light is down in the DCR Cave, but I usually avoid that since I have to spend more time cleaning up the photos due to the poor light down there.

Well, almost every daylight moment was spent photographing.  There were some cases where the daylight wasn’t yet enough to do shots.  So in that case I was either outside with Lucy, or eating.  For example, just after sunrise I went out along a very quiet river and played fetch with her: 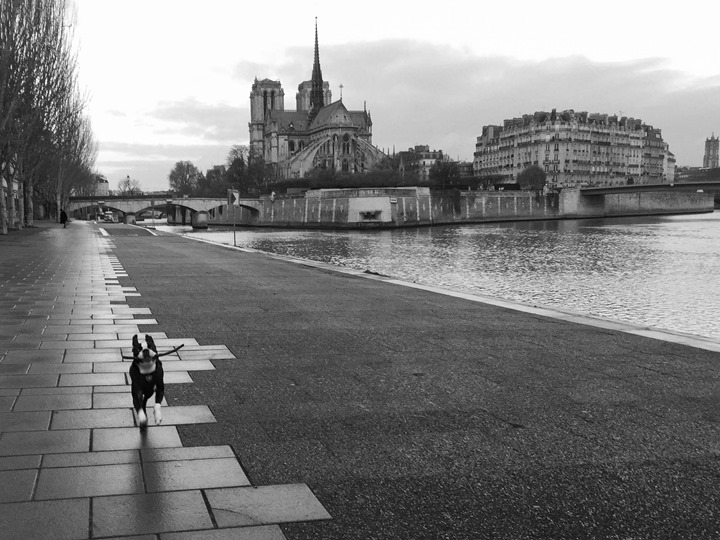 Then shortly after lunch, when The Girl finished up baking for the day at the CupCakery, we hit up our favorite crepe spot for lunch (becoming a Saturday afternoon usual for us): 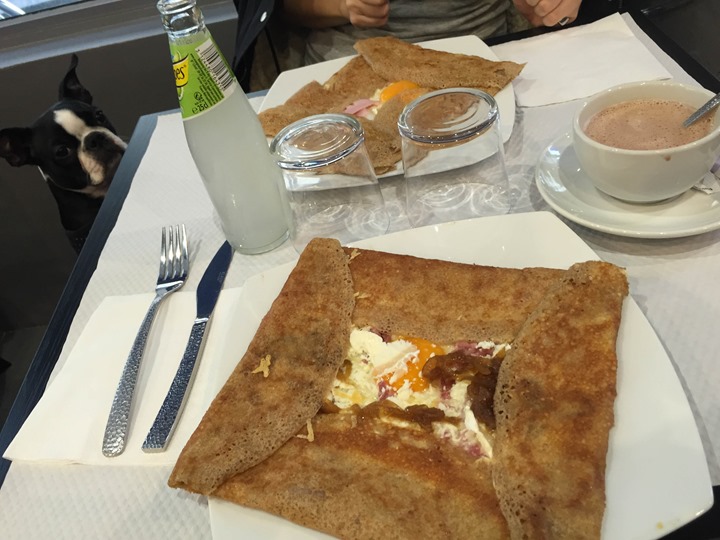 Also, while finding groceries for dinner at the market later that night I noticed they had replaced/moved the fresh pasta section with chilled Champagnes.  While there is always plenty of Champagne at the markets, it’s usually not pre-chilled.  For New Years though, they went ahead and ensured proper serving temperature: 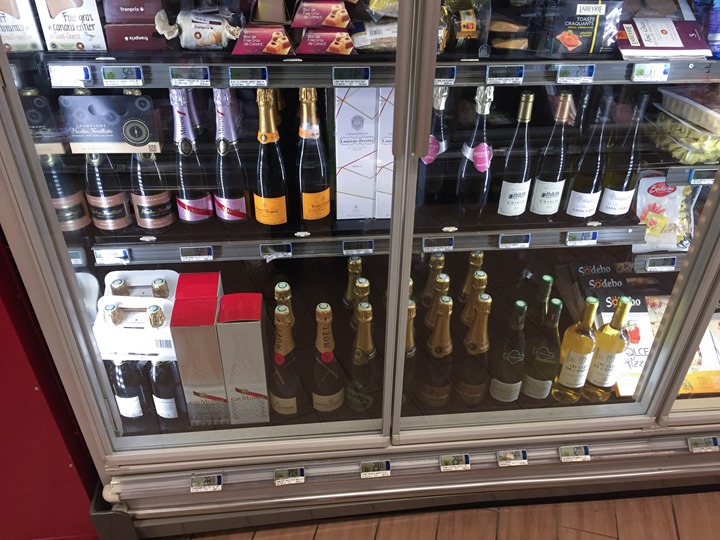 For those curious, the Veuve Clicquot Brut is 41EUR here.  I’ve got no idea if that’s roughly what they cost in the US, but all sorts of Champagne can be found here pretty cheap.

Next, there’s a lot of talk in France about food wastage.  I went into a small market on the corner on Friday night to find milk, and noticed this box of cereal.  Surely in the US they would have likely thrown the box away.  But here, two pieces of tape and it’s as good as new: 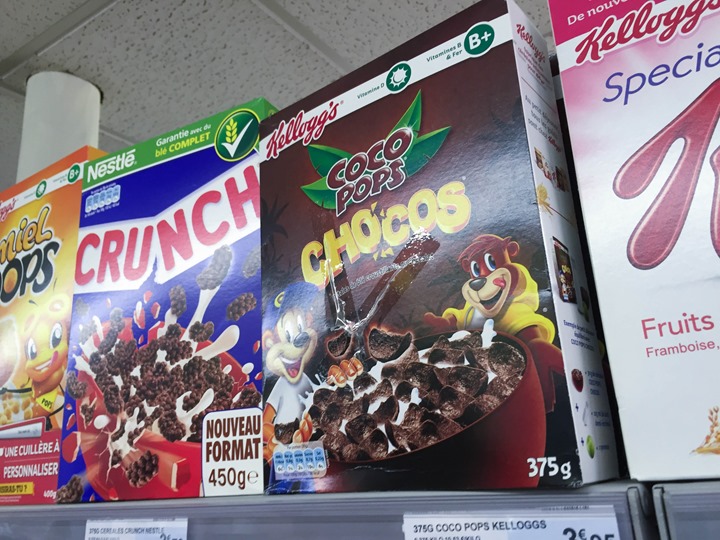 No reason to throw away perfectly good cereal just because it’s appears to have a bullet wound.

Speaking of wounds (now that I’m totally distracted).  We got our Christmas tree out of our apartment.  Which, turned out to be a feat.  That’s because the tree was thoroughly dried out, and rock-hard.  So the branches didn’t bend, they snapped (and exploded with pine needles).  Further, the braches were far wider than either our front door, or our tiny little elevator.

So we decided to wrap it up like a dead body, and try and get it out that way.  Why you ask?  Because of pine needle droppage minimization.  It kinda worked. 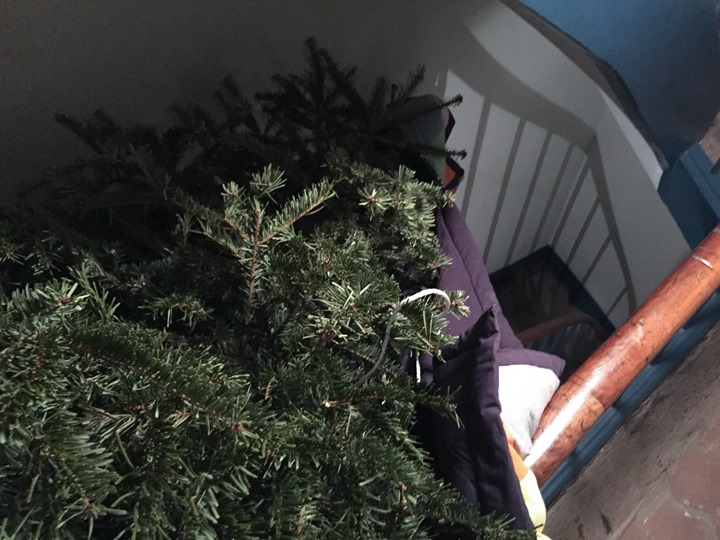 Of course, trying to drag out this tree wrapped in a large picnic blanket made the whole thing that much more humorous.  Especially once The Girl shoved both me and the tree into the elevator and pressed the down button. 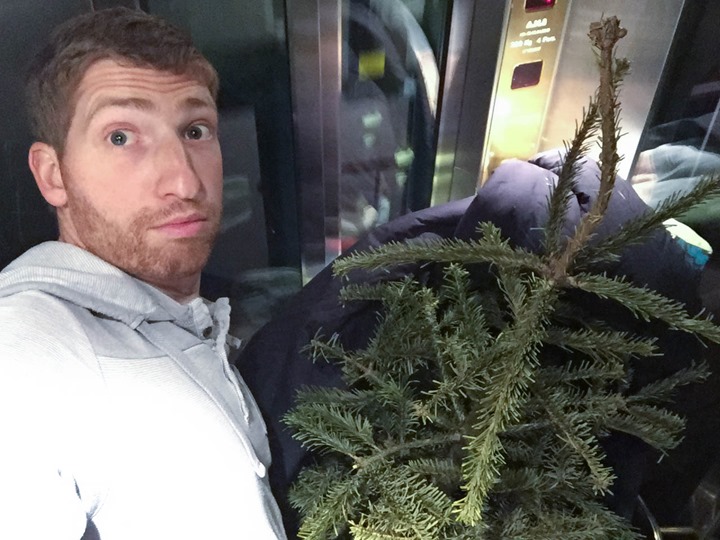 Lucy was not entertained by the situation: 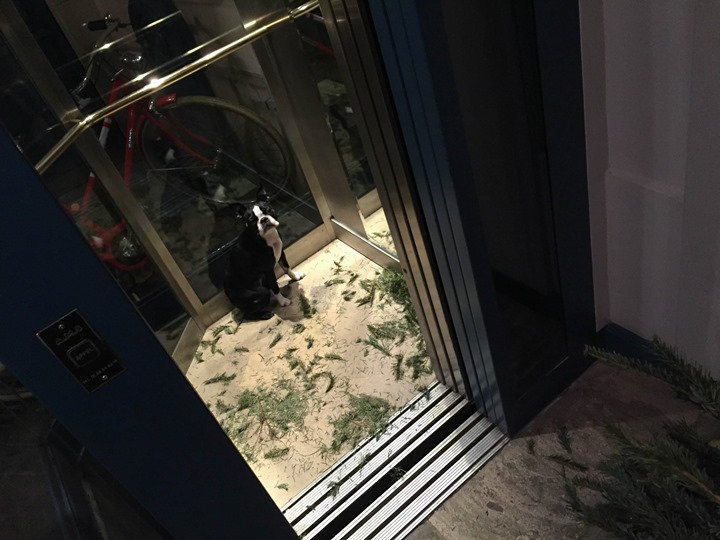 But, we got it out, and that’s what counts.  One of these years we’ll remember to buy rope and just lower it out the front of the building. 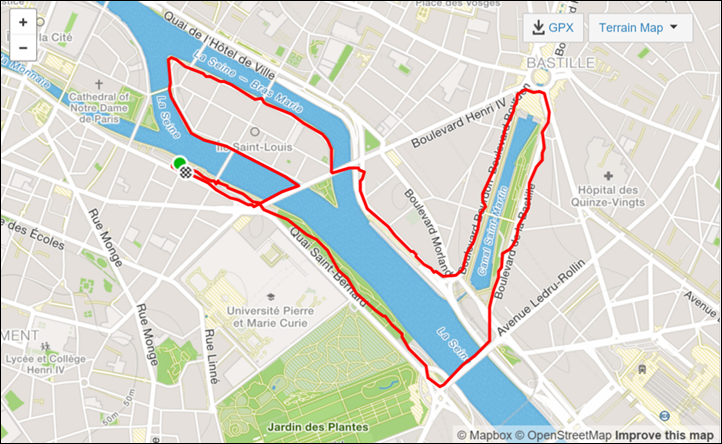 While I was getting shots done for CES, I was also out riding and running around in circles.  Most of these rides/runs were shorter – mainly designed to test specific things or to gather various required photos.

It was sorta a race against time between daylight and getting everything done.  It’s hard enough taking good product photos on a tripod during darker hours, let alone trying to do so while riding or running.

Still I got in a nice brisk 5K run (plus some other running), as well as a short ride.  Could be worse given the circumstances.

5) Flew back across the pond to CES

With approximately 32GB of photos (+ video too!) downloaded to my laptop, and tons of gear packed for the trip, I headed out to the airport well before dawn Sunday morning (a mere 48 hours after I was just arriving at the airport inbound).

It’s funny, as much as I (and every other person on earth) hate Charles de Gaulle airport, I’ve come to find a special place in my heart for Terminal 1 there.  Terminal 2 (the far bigger and nicer one) is a complete fiasco in almost every way.  But T1, it’s kinda special. 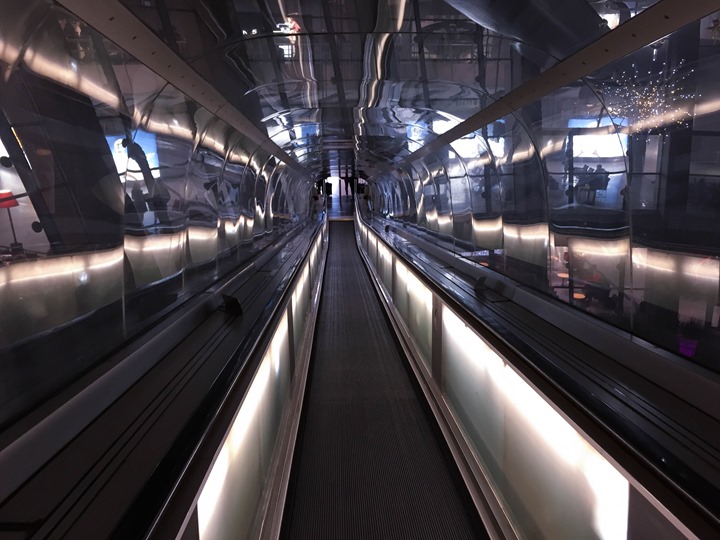 See, once you get the hang of it, you realize that it’s actually quite small.  And oddly enough, both incredibly inefficient and efficient at the same time.  It’s inefficient in that virtually any change of gate requires re-doing security.  Yet at the same time, by pushing security right next to the small sets of gates, you get small lines.  Also, at most you have to walk a few hundred meters.  Versus T2 and many other major international airports you could be walking a mile or more.

Which is nothing against walking, but rather just how tight I can cut my arrivals.

My routing for today took me over the cold and frozen Arctic, from CDG to SFO, then onwards to Vegas.  Once the clouds cleared past Greenland, it was hours of continual sunrise/darkness with peaceful snow and ice stretches below as we streaked over northern Canada. 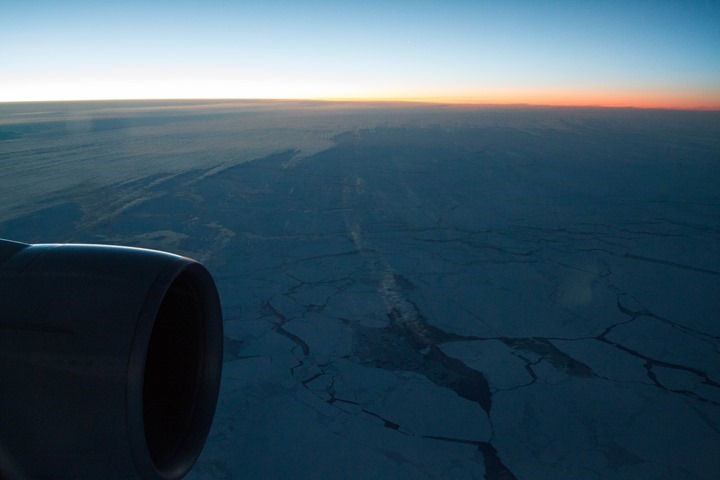 Me, 11 hours of writing posts and e-mails, and I’m mostly ready for the busy CES week ahead!