Just a very short 40ish hours back at home this weekend in between trips – but I made the most of it.  Here’s what I was up to!

1) Flew back from Canada

I started off my weekend with a few thousand mile transit.  First departing Calgary mid-day, where I had spent the previous week up in the Kananaskis area for the ANT+ Symposium, and then hopping through Chicago. 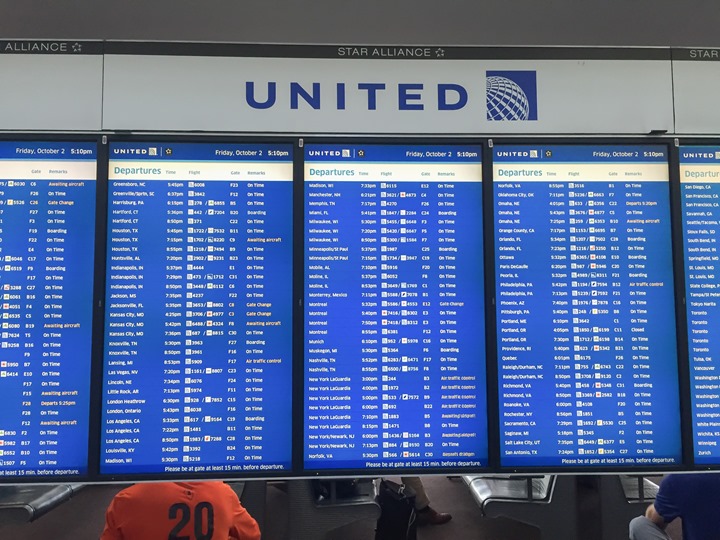 The first three hour flight from Calgary to Chicago was relatively quick, and then it was just another 8ish hours from there to Paris.  Somehow, 8 hours seems short these days. 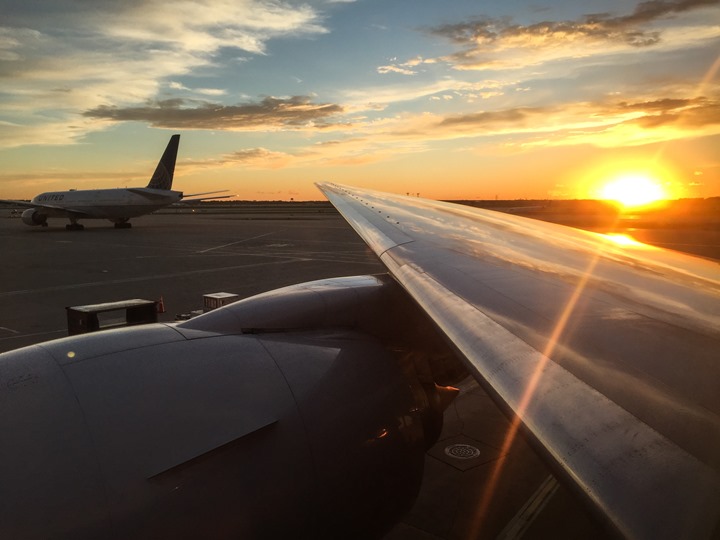 By time I got my baggage and back home it was just around late lunch in Paris.

This weekend marked the 3rd birthday for the CupCakery, and following tradition of years past – we threw a bit of a party.  Invites went out on social media for folk to get free mini cupcakes and Champagne, as well as deals on cupcakes themselves.  Given the beautiful weather – there were plenty of people dropping by. 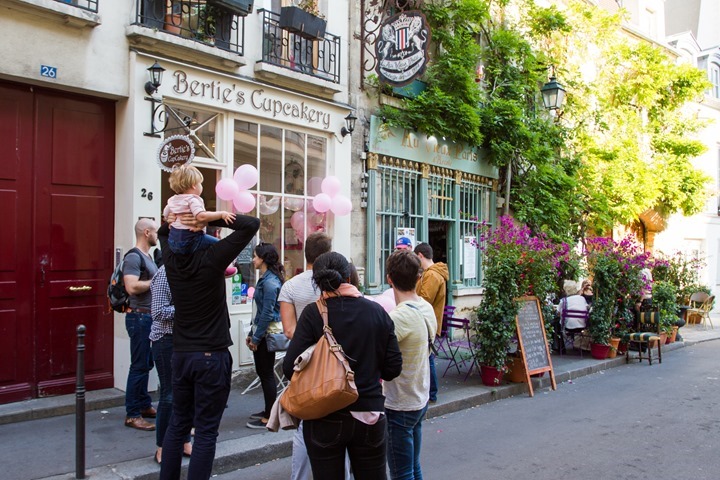 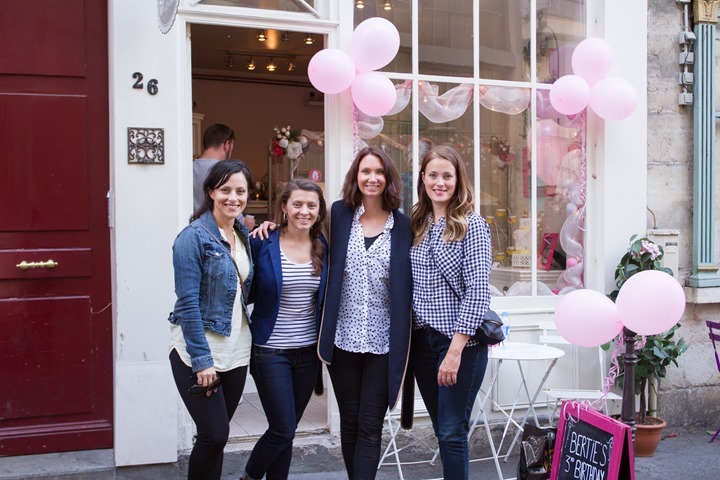 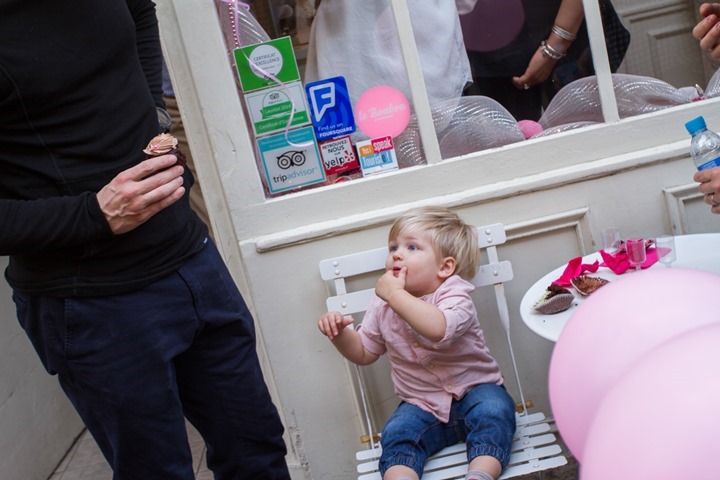 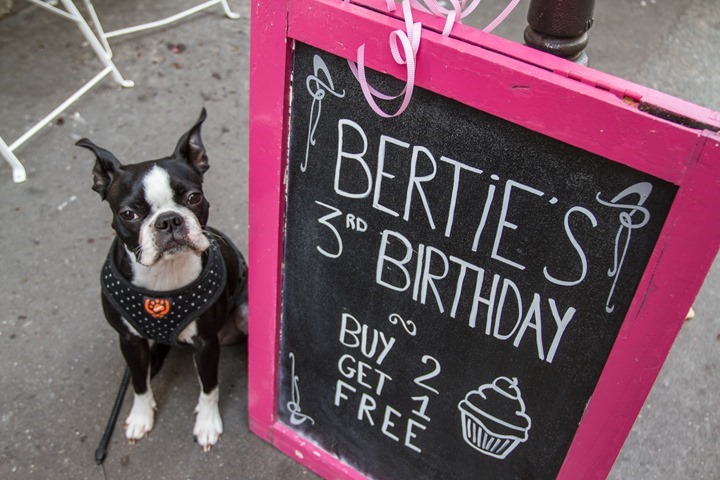 Heck, even our neighborhood police stopped in to pickup some goods!  Though, it probably helps that the police station is a mere two doors away. 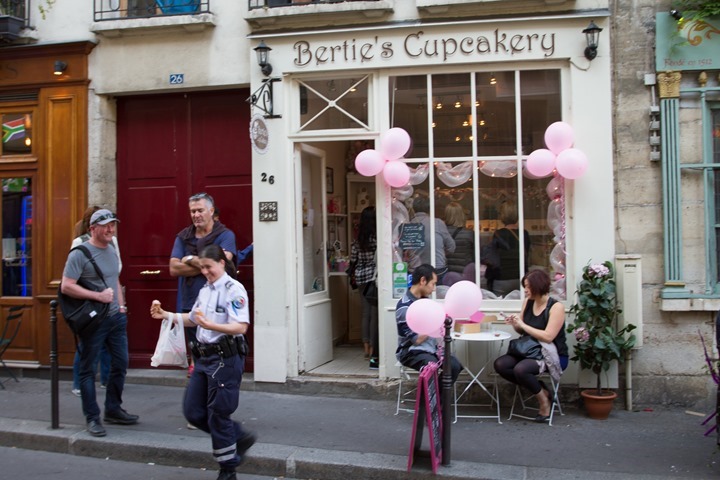 We also stayed open a wee bit later than normal as well, given both the day of festivities, as well as it being Nuit Blanche. 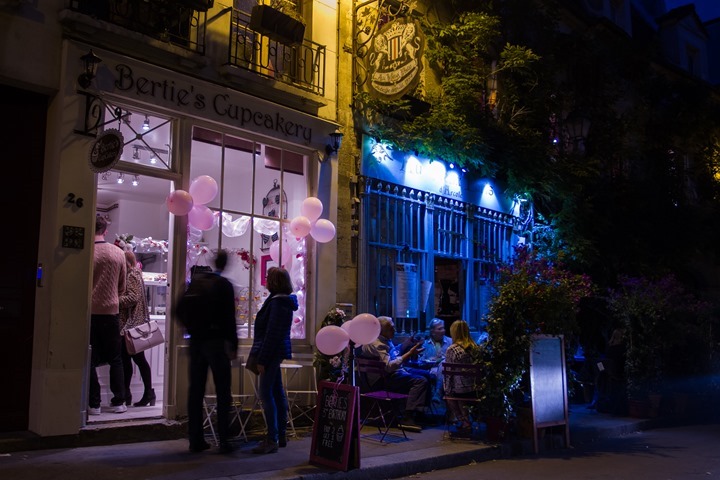 The Girl (and I) wish to thank the many DCR readers that stopped in on Saturday (I was lucky enough to meet a few of you while I was around), and of course over the last three years – it’s always great to say hi to folks!

3) A touch of Nuit Blanche

After a long day at the CupCakery, we had a small group of friends over at the house for dinner (and wine…and champagne, obviously!).

But following that we headed out ever so briefly to check out some of Nuit Blanche.  You might remember my post on it last year, but essentially it’s when Paris stays up all night long and various locales have art installations accessible to the public.  These are one-time art installations for just that night, often located in spots otherwise not accessible to the public normally. 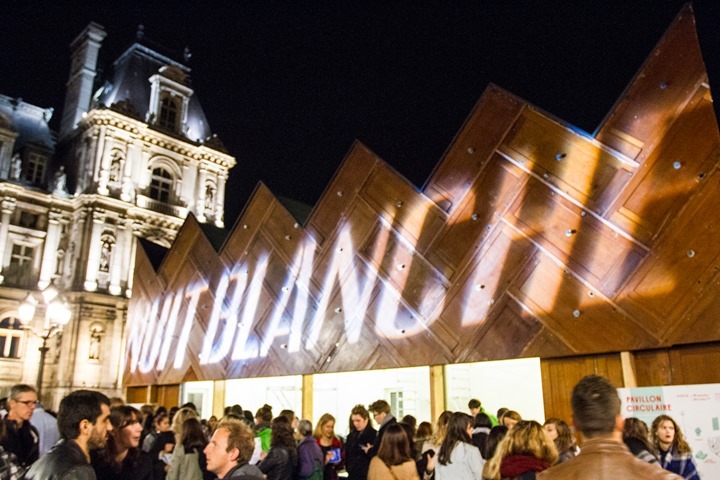 The evening is designed around specific routes, which are painted on the ground in the form of a blue line.  Last year it started from Hotel de Ville, and then stretched through our neighborhood just up the hill behind us.  Each line/route is about 5-10KM long. 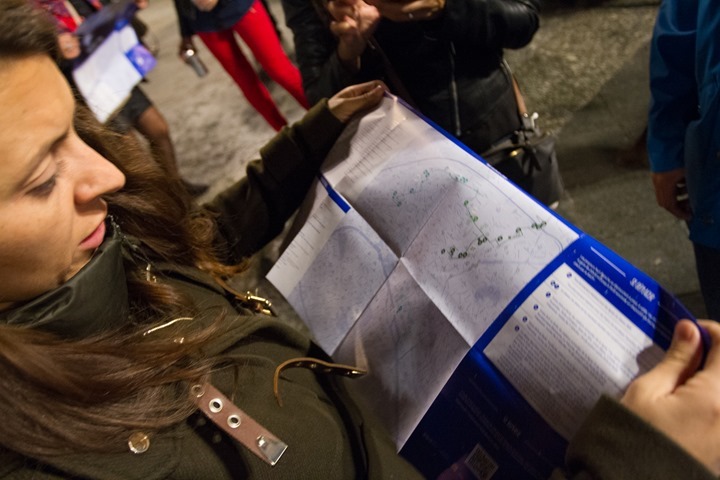 We headed over to Hotel de Ville, where they had a setup a crazy ice pattern thing.  Essentially each pillar was incredibly clear ice of a varied color.  While in this photo you can only see a few dozen pillars, it actually stretched across the entire city hall plaza. 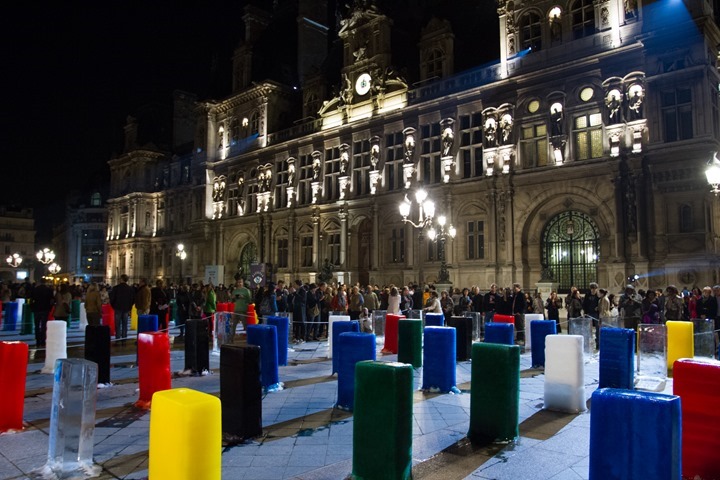 In theory they would fully melt by the end of the night (7AM the following morning is when Nuit Blanche ended).  Though some also toppled and splintered. 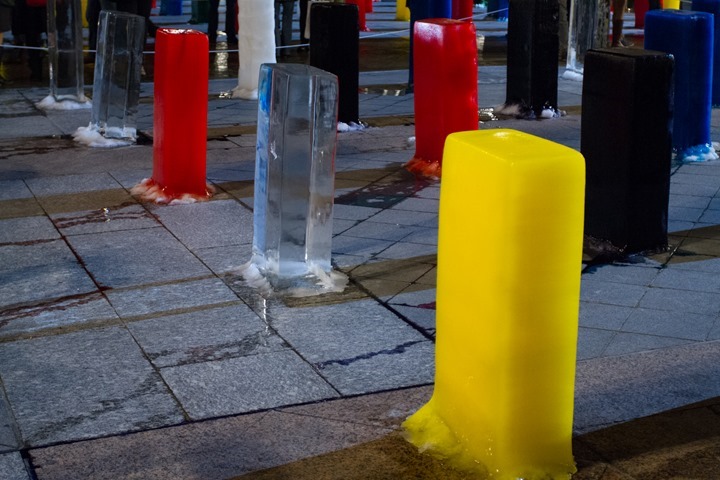 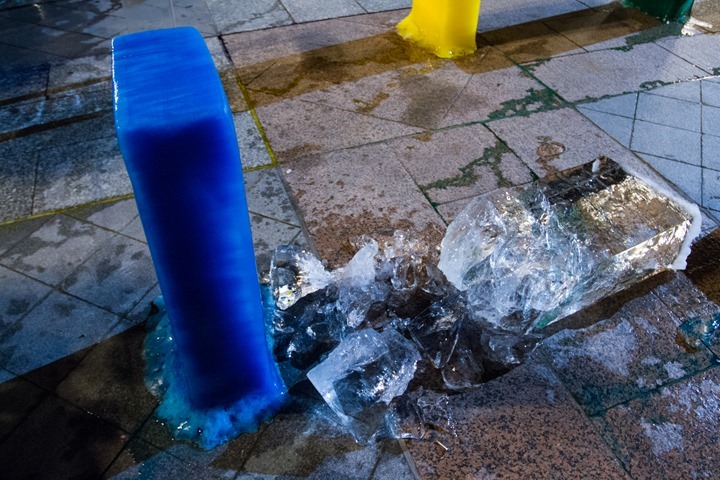 This year the two lines (routes) for Nuit Blanche were on the complete other side of Paris, though they did look pretty epic from what we saw on Twitter later on.  Unfortunately, given I had taken the redeye back from Canada and was operating on about 3hrs of sleep, and The Girl running on about the same – we decided to call it a night around 12:30AM (rather early for us).  Though, we still had just completed custom cakes to move from the Cake Studio to the CupCakery for early morning pickups.  No rest for the weary.

With two back to back trips, and only 40 hours in between at home I was rushing to get lots of shots done for upcoming product reviews (ones that are mostly backlogged).  These being ones that I’d write while on the plane.  Of course many shots I can do elsewhere in the world (such as running, swimming, or just generic shots).  But for things reliant on cycling, trainers, or other odds and ends around the DCR Cave – I pretty much pre-plan a shot-list and then iterate through it. 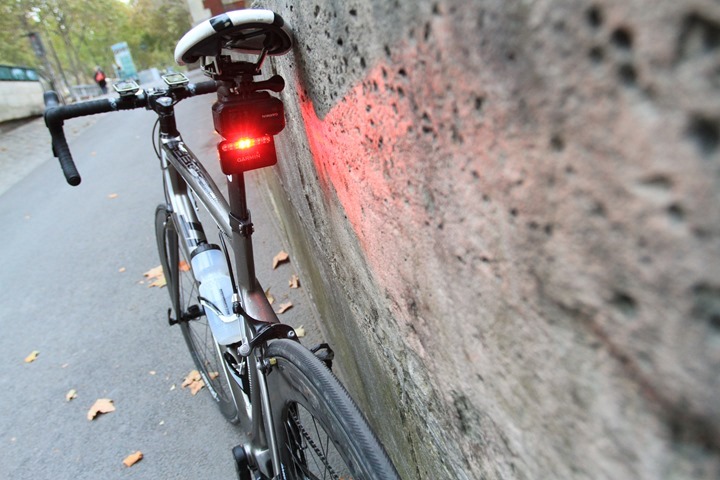 I probably spent about 3-4 hours on Sunday working through this list for three major reviews for the next 7-10 days.  When products naturally work together (but are otherwise on separate reviews) I try and take care of those shots all at once.  An example being the Edge 520 & Varia Radar. 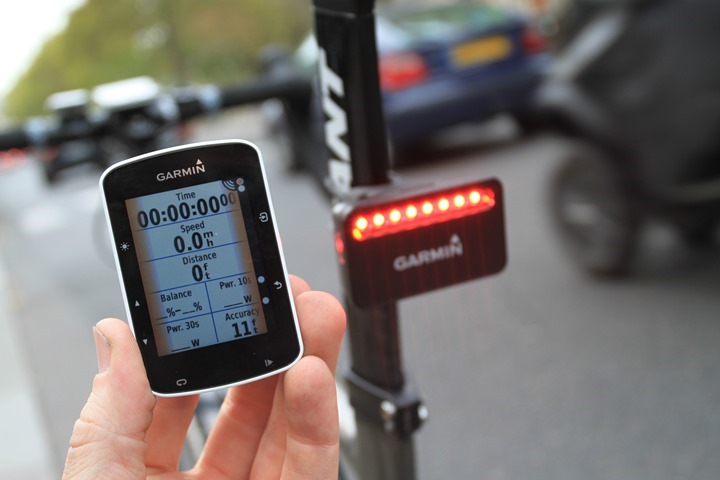 And then sometimes it’s actually backfilling shots that people have requested from older reviews.  For example a few photos people wanted on my cleats with the bePRO power meter pedals & pods: 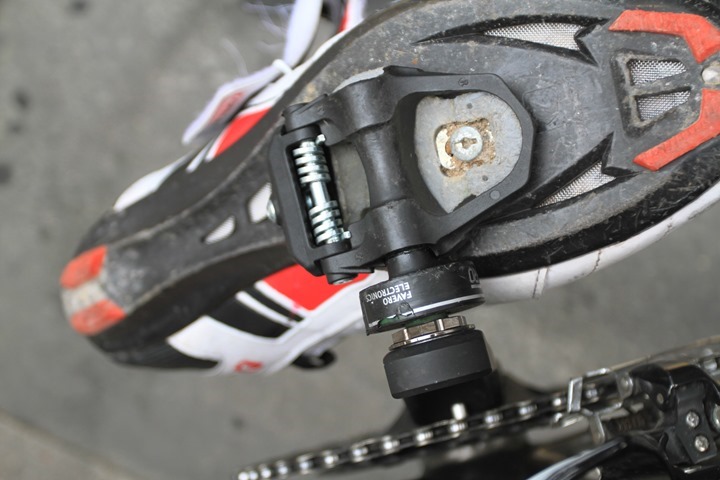 All of which ignores a slew of video – especially relevant for action cams reviews or related products.  While I tend to shoot much of the action cam videos outside of Paris on various trips, I do a lot of side by side comparison footage on the bike within Paris on a bit of a loop I’ve created that I can quickly repeat.  So there were a few loops of that done too. 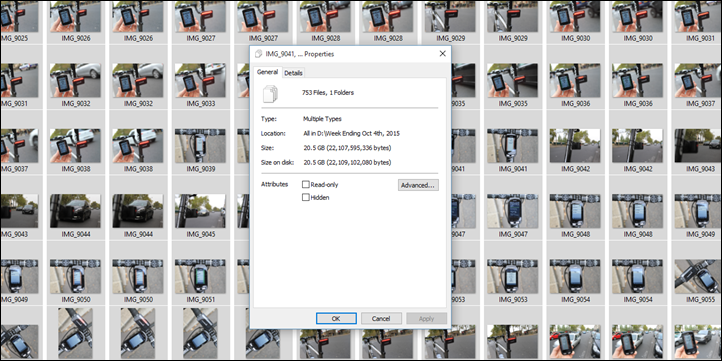 It was a busy few hours with some 20.5GB of photo and footage shot!  In case you’re wondering, I shoot dual RAW/JPEG – which is why you see duplicates above.  I do that so I can clean up photos in RAW, but for quick stuff I can just use the JPEG.

5) Walking through a movie set

Our home, the CupCakery, and the DCR/Cake Studio make a bit of a perfect triangle that we seem to transit numerous times each day.

That triangle is also home to one of the busiest spots in Paris for shooting movies.  On average there’s probably 3-5 movies shot a week in this section adjacent to Notre Dame.  Either on/around the property, or along the river in front of it.  It’s so frequent that I’ve long stopped taking photos of the sets, except in rare cases when it’s crazy big – such as this weekend.

We noticed the large old-school busses from quite a distance away.  Not just one, but two of them! 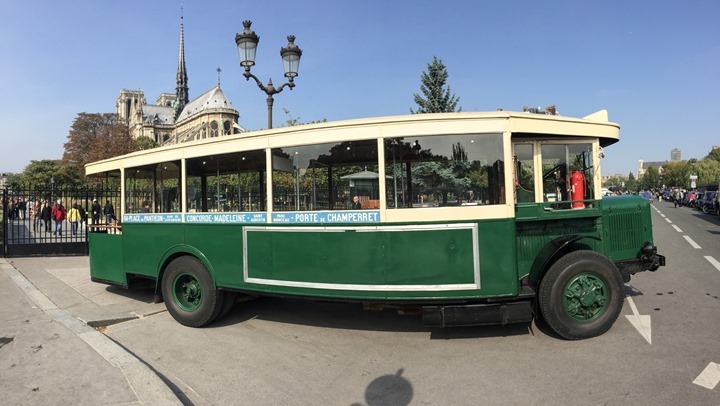 Then, in front of them were a dozen+ super old-school cars lined up: 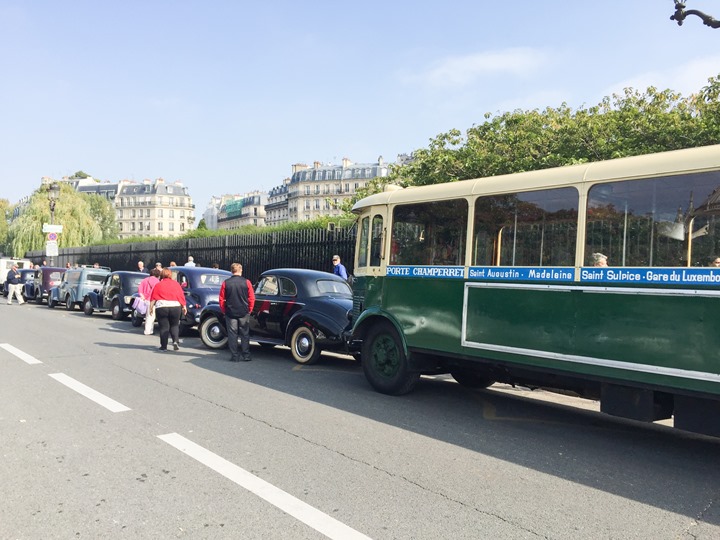 Along the fence they had piled up a mass of vintage bikes, including a nifty tandem in there: 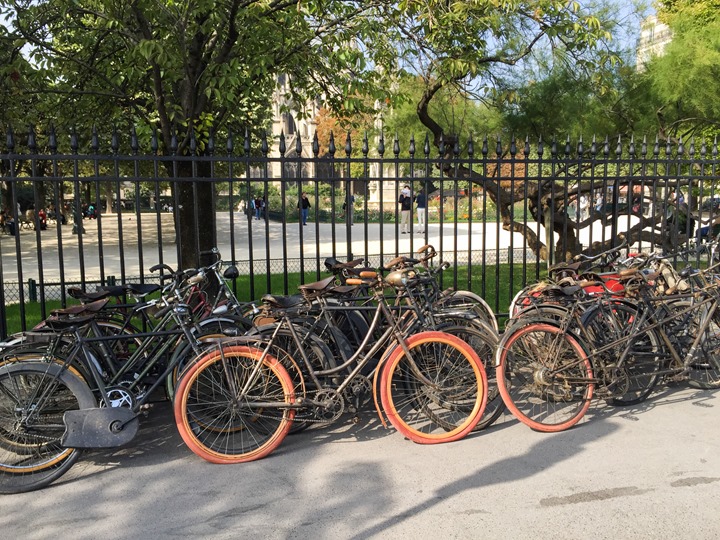 There were also horses being collected into vehicles, as well as a bunch of props that looked like old crates.  And of course, probably 8-10 movie trucks.  At this point in the day things were already wrapping up, as most of the crew had gone and they appeared to be packing into the trucks.

Still, it’s always kinda fun to see the movie sets – especially when some months (or years) later you see your neighborhood on the big screen.

thanks for reading, and have a great week ahead all!