Here’s what I was up to this weekend.  Or rather, all of about 24 hours of it while at home. Had to squish things in a bit! 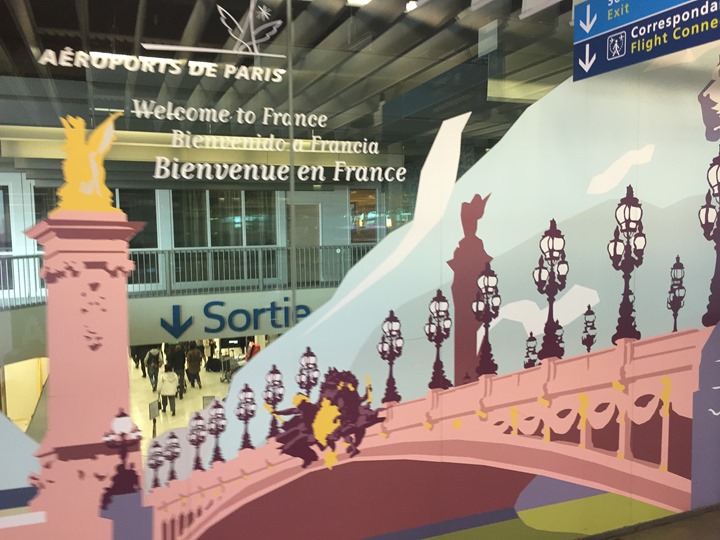 While it may seem as a bit of an easy one to put on this list, it sorta took up about 1/3rd of my usable weekend space.  Thus, it counts as far as I’m concerned.

For better or worse, the flight from NYC to Paris is super-short.  In this case at just about 6 hours in length.  Had it been to London it would have been even shorter, roughly on par time-wise with a typical winter flight from NYC to LA.  Always kinda funny to think of it that way.

My flight arrived in Paris a little bit before noon, given it was a late evening departure from New York.  That meant that basically half of my Saturday was already gone.

2) Some steak and a walk 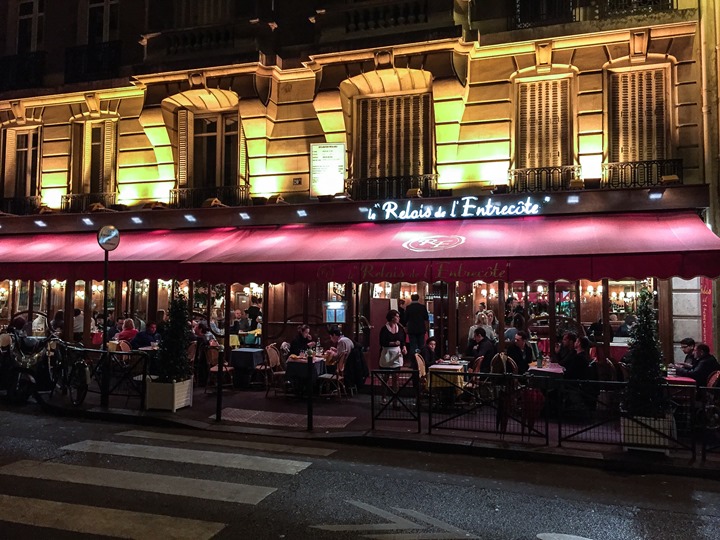 Back a few weeks ago some folks suggested that The Girl and I try out one of the more famous steak locations in Paris: Le Relais de l’Entrecôte.

The establishment (given its namesake) is known for its one and only dish: The Entrecote 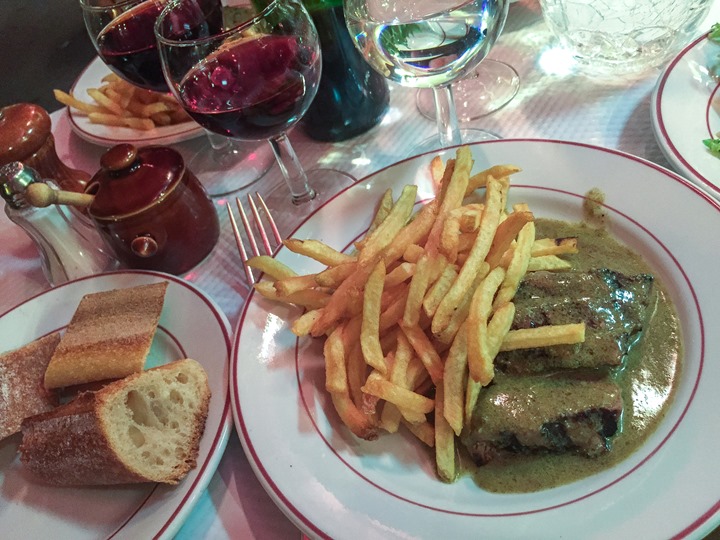 Did I mention it was bottomless? 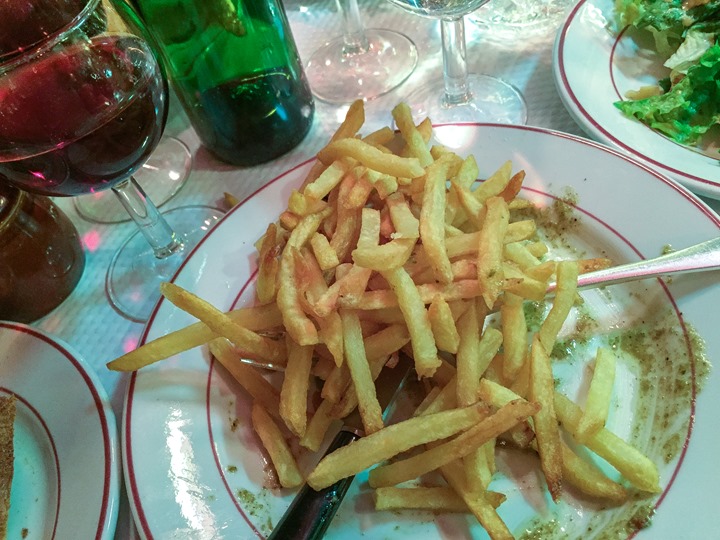 We both agreed the frites were excellent, and the steak quite good considering for the total meal price (~25EUR).  But certainly not the best steak in Paris.  But still, a very good steak with very good frites for a very good price in this city.

From there we walked the mile or so back home.  It was a nice warm Saturday night, so we enjoyed the jaunt – even when it’s just passing famous buildings we pass back and forth in front of all day: 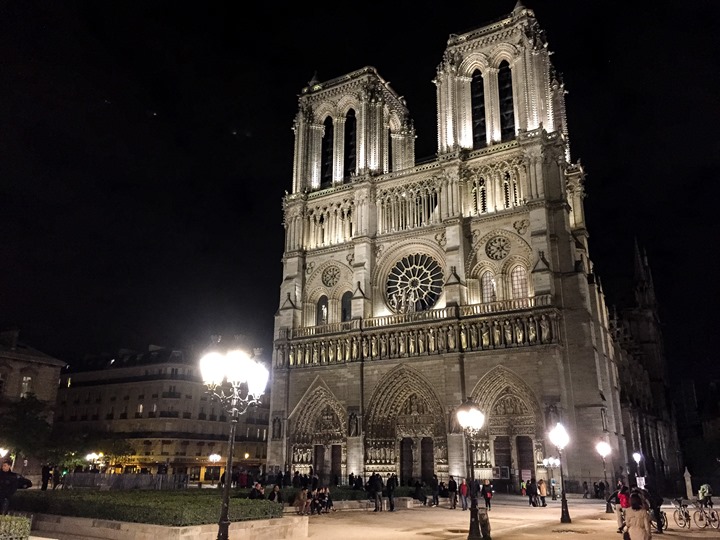 While I’ve run the Paris Marathon in the past, this year it was not on my to-do list.  Instead, I’d walk across the island and watch it pass by.  Seemed much simpler and less painful that way.

I first went out to go see the pros flying by.  Or at least the male pros.  While it’s always astounding how fast they run, I don’t think even standing there does it justice.  I think you have to run that pace to realize just how fast that is for as long as it is.  Mind-boggling. 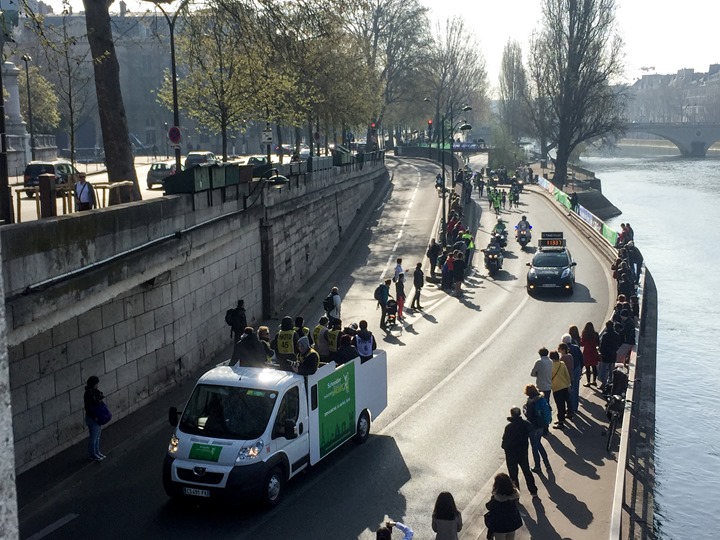 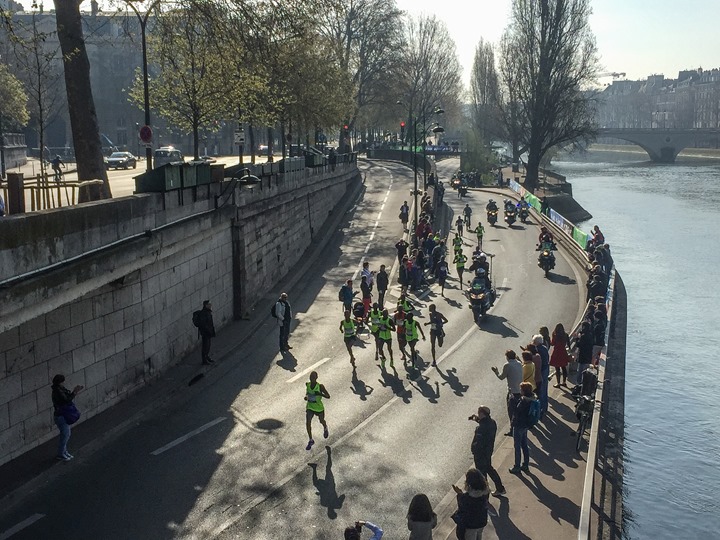 Then I headed back to the home and office to take care of a few things before returning to watch the masses running on by: 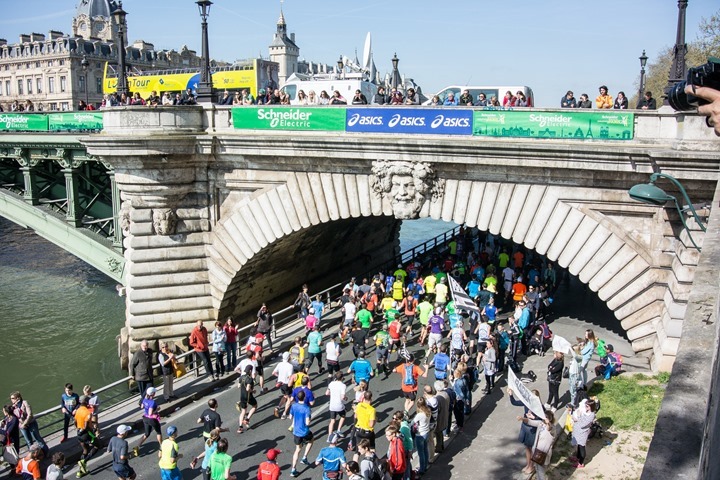 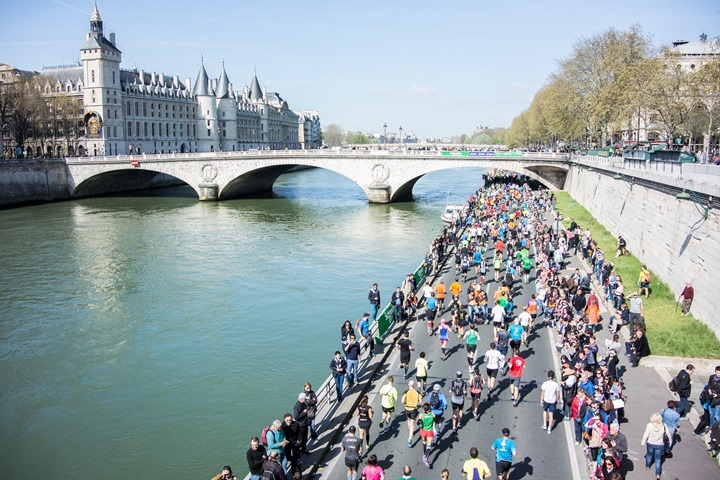 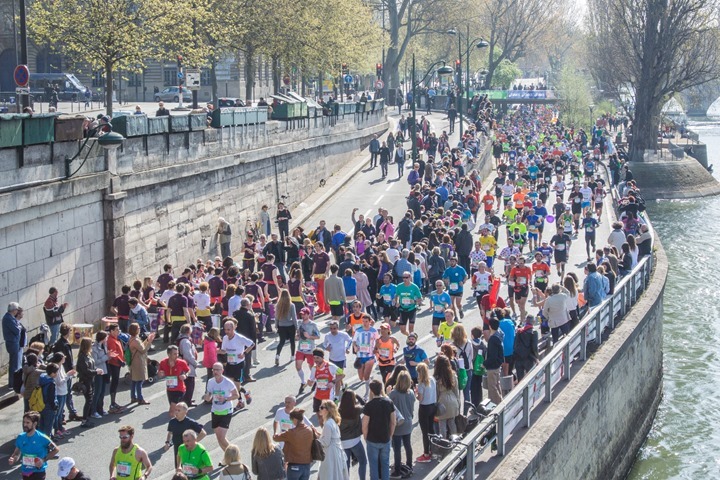 Congrats to all those who ran yesterday!  No doubt the fairly warm and sunny weather made it a much more difficult day out there, as there’s not a ton of shade on the route given the sun position and the river.  Well done!

4) Unboxing the Rideye, and a short bike ride

Upon departing NYC on Friday, I had one additional box with me: A Rideye camera to test out.  The company shot me over the unit to my hotel room, which was cheaper/easier than sending it to France.  Upon getting back this weekend I got it all unboxed: 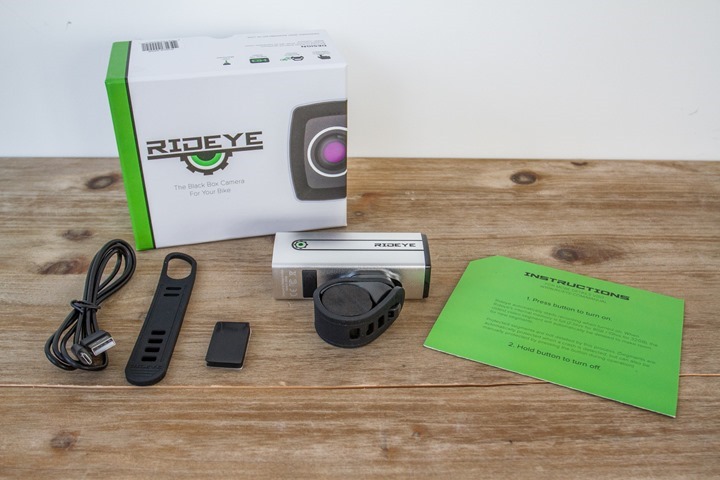 Here’s the video I shot of the unboxing:

The Rideye is designed to be a black box camera for your bike.  There’s really only one button/function, which is turning it on.  It then records the footage within its very-crash-resistant shell.  Seriously, it’s built like a tank.  And weighs like one too.  It’s not so much designed to replace a GoPro as it is designed to assist you in the event of a car/bike tango.

Following the unboxing, I took it out for its maiden voyage on a short 30-minute bike ride loop to the Eiffel tower and back.  I didn’t have much time for a longer ride given the weekend and everything else going on – but the weather was so nice I couldn’t resist at least a short ride. 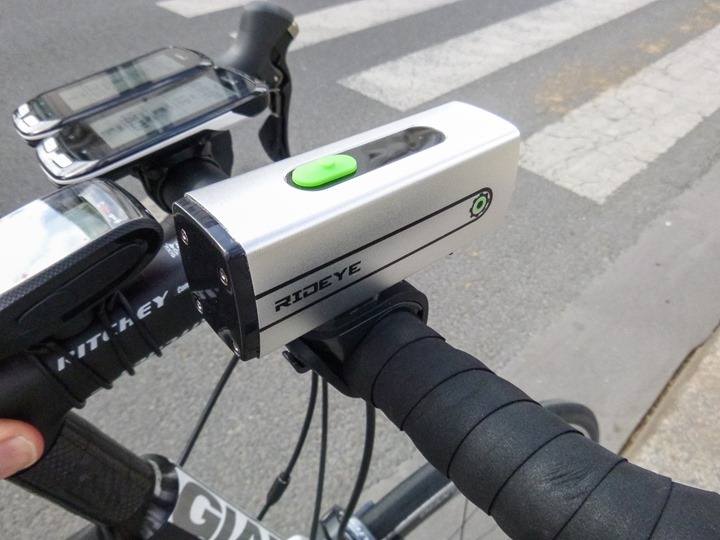 For fun, here’s a short little clip of the action from the camera as I rode on the closed road that was adjacent to the marathon still going on.  Towards the end of the clip, I then depart that road and head onto a stretch of cobbles.

(Yes, I realized I forgot to update the timestamp before heading out.)

First impressions are that the unit is built physically quite well.  Though, perhaps overly so.  Also, I’m a bit surprised with the wobble you see in the video.  These are some of the smoothest roads around, and it was a bit wonky.  The wobble of course won’t matter in the case of an accident, but it does minimize the ability to use the camera for other purposes.

Still, I do like the one-button approach.  And, I’ve yet to test (or at least simulate) the crash functionality in terms of being able to write-protect data.  So certainly much more testing in store. 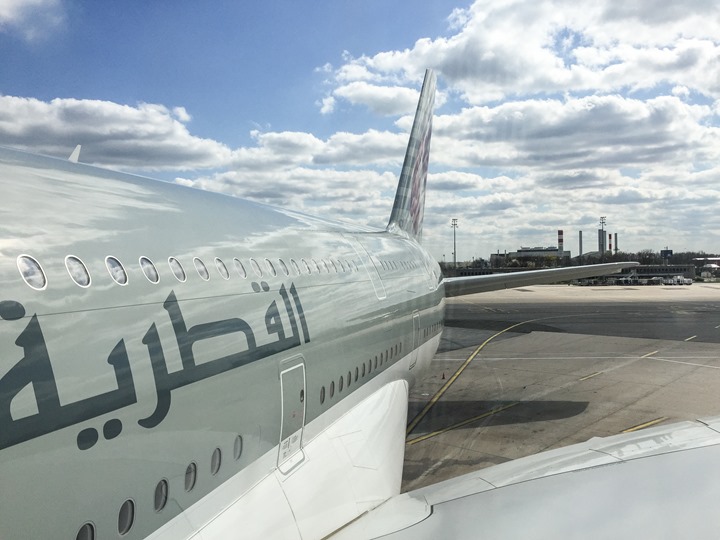 Last up…just a bit over 24 hours after I arrived home, I was already leaving home.  This time I’ve got a relatively quick 2-3 day trip down to Doha, Qatar for work.  I selected the late afternoon flight over the redeye option, as the flight to Qatar is only about 6 hours.  Thus for a redeye to start off the week that’s going to be busy, I wanted to save my sleeping for actual legit sleep in a real bed.

I’d land around 11:30PM or so, and then it was off to the hotel.  Simple and straight forward.

Thanks for reading, and stay tuned for the week ahead!  I might just break a non-CES week posting record here.  Tons of stuff going on…