Our Parisian Dinner in White with 13,000 people

Tonight we participated in the famous Dîner en Blanc de Paris (Dinner in White of Paris).  This event is now in its 26th year, and this year some 13,000 people joined in the fun around the city.  The event also takes place in a few other cities around the world.

There are numerous rules in the event, and failing to follow them will get you kicked out for the following year.  Of course, the most visible important rule is that everything is in white (or covered in white).  But there are tons of smaller rules from the exact size of your table (you bring it) to your tableware and exactly where you sit and which side of the table you sit on.

The entire event is invitation only, and you must know someone from a previous year to get an invite (where our totally awesome friends hooked us up).  Once you’ve secured an invite you won’t actually know where in the city you’ll be setting up dinner until just beforehand.

In our case we met at 8:00PM at an area ‘somewhere near’ where we’d be having dinner (within a short walk, like a staging area).  But it wouldn’t be until 8:45PM that we’d get the text notifying us of our precise seating location.  So we hung out till then like a few thousand others (though, mixed in with the after work bar scene that had no idea what was going on). 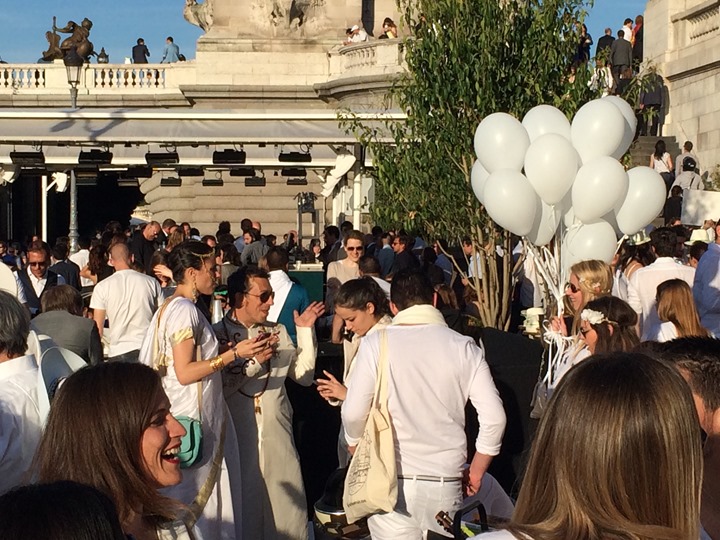 While it’s not an official city event (sorta like a flashmob), the city and the police turn a bit of a blind eye to it (while definitely enjoying it as well).

Just before 9PM the text messages dictating our final location started flowing in, and as a result, people started flowing out to find their places.  It was a bit of a slow moving procession since you had to carry everything with you: Table, chair, food, copious amounts of wine…everything.  Across the street it appeared as if herds of animals were moving across the grasslands of Invalides:

Luckily in our case our destination was just up onto the bridge (Pont Alexandre III) near us.  The bridge is well known for its golden statues on all ends and is in countless movies.

Everyone quickly and semi-efficiently got to work setting up tables.  As noted, each couple had to bring a table and two chairs, with said table meeting various width requirements – ensuring that all the tables lined up. 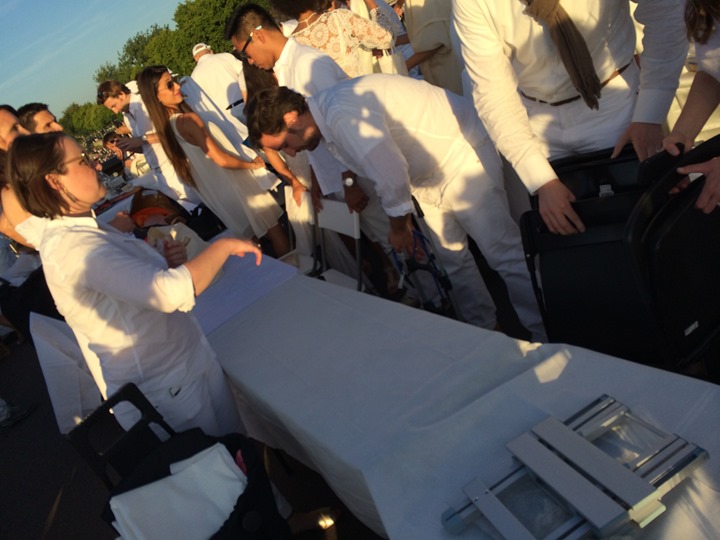 Soon the tables were setup and it was time to begin our dinner. 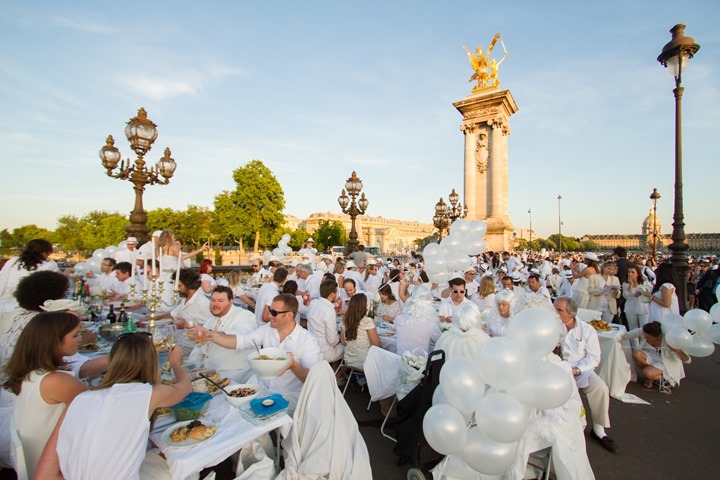 All of our friends brought various items and we passed them around.  Most couples had their own bread (since no Parisian would be without their baguettes), and most couples also brought 1-2 bottles of wine.  Here’s our little stash (with a spare bottle of wine on deck below the table as well): 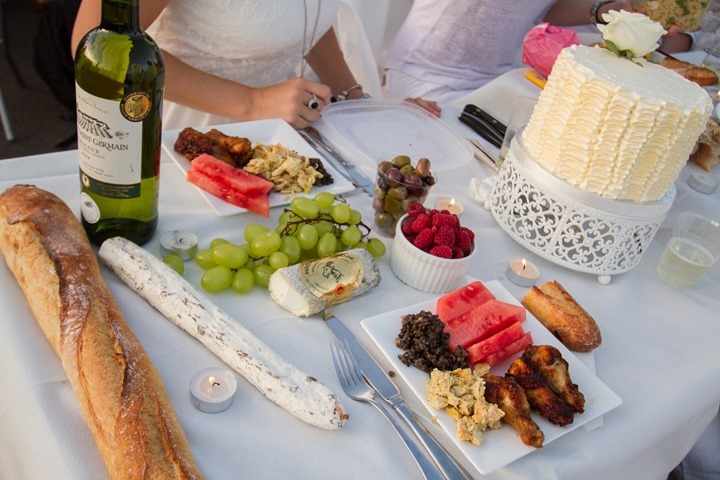 Of course, The Girl made a cake.  A lemon poppy seed cake with fresh raspberry layers and a cream cheese icing, in case you’re curious.  It was awesome, and might actually be my favorite cake flavor combo to date. 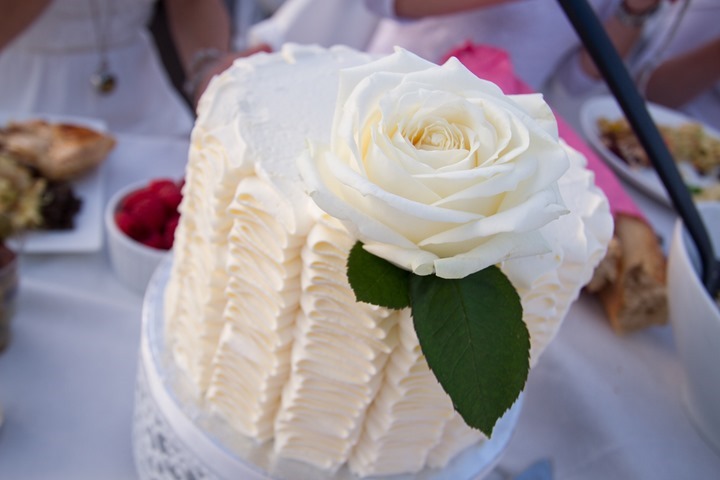 Our chef friend was  cooking up chicken breasts…they were awesome (they were sous vide first just beforehand, and then finished here at the table). 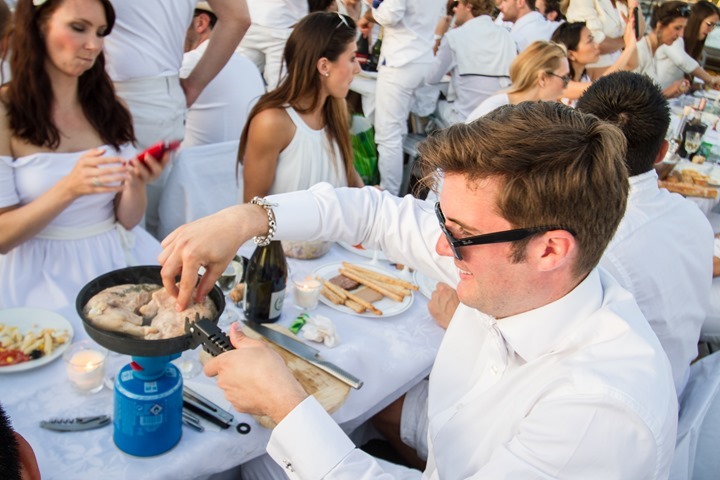 In our case we were on the eastern side of the bridge (which is over the Seine), with just about 1.5 meters (4.5 feet) of space left on the sidewalks for pedestrians to still walk through.  There was no blocking the actual roadway. 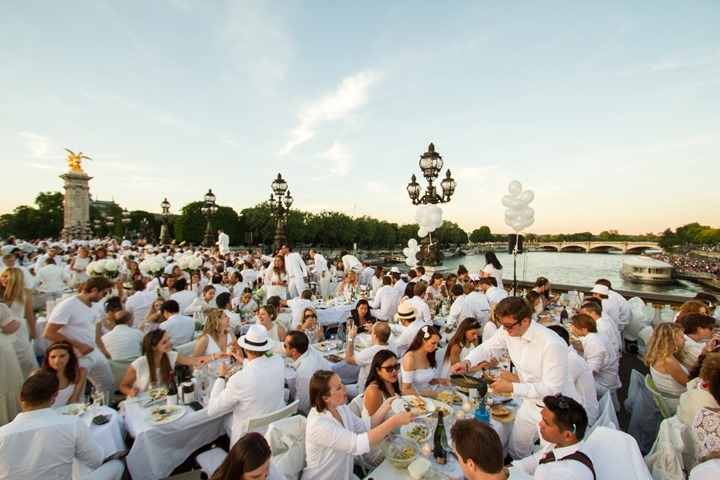 Meanwhile, on the opposite side of the bridge was the same thing, this side facing the Eiffel Tower. 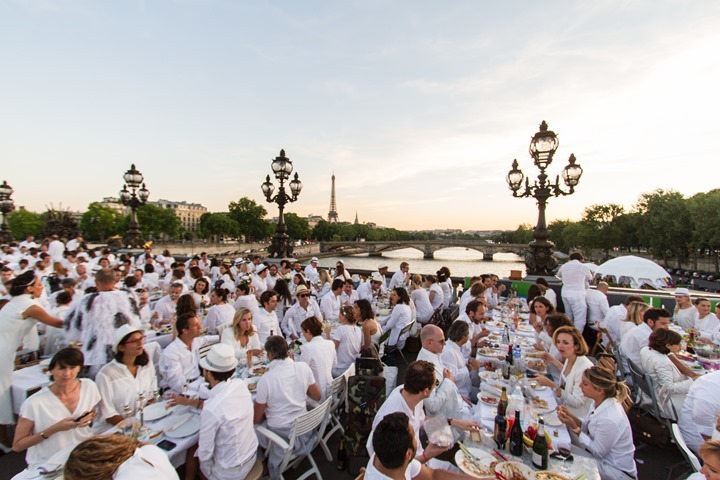 At the end of the bridge was Invalides, which was covered with seemingly never ending tables: 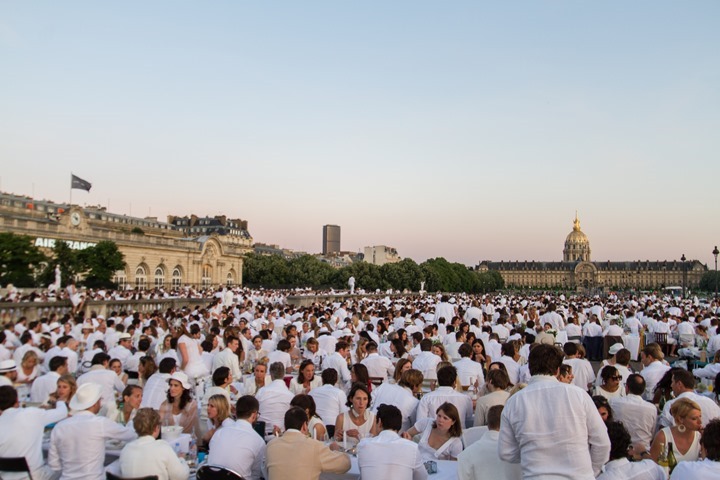 Of course, for tourists this was quite the draw, especially since we’re basically a day away from the start of the peak tourist season.

Everyone was laughing at one point when a gaggle of tourists stopped and actually randomly picked two girls from the table next to us and went in between them to get photos with them.  About 10-15 people in the group in total individually went one after another to take photos between the bewildered girls.  They were good sports about it. 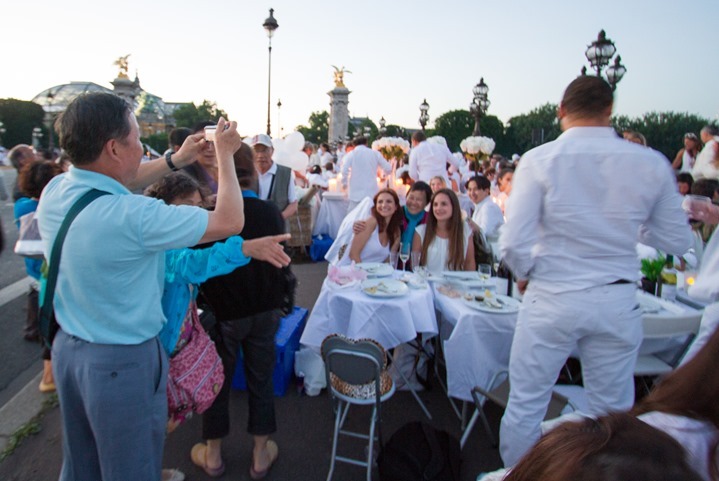 Perhaps we weren’t selected by the tourists due to our table’s manly prowess: 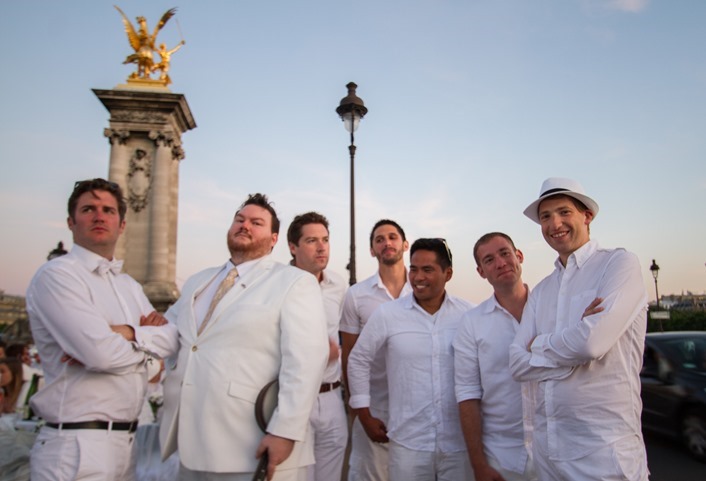 With the event starting at 9PM it’s still quite light out here, as sunset isn’t right now until around 10:15-10:30ish.  Once the lights kicked on however, the scene looks a whole lot different. 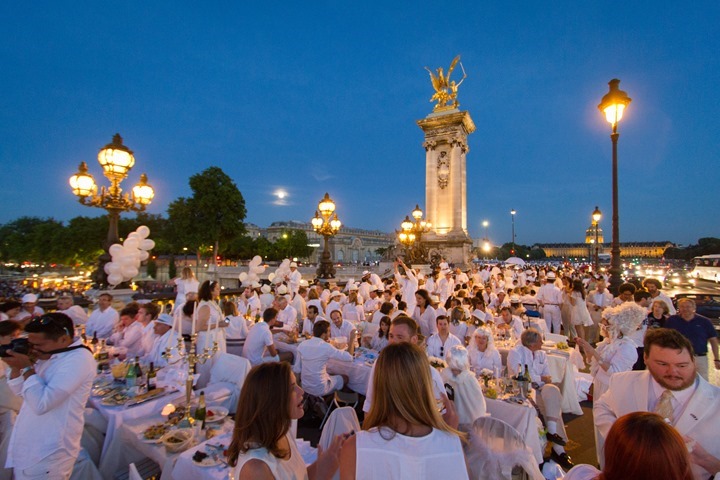 Some tables went above and beyond the call of duty in bringing massive floral and candle displays.  Obviously, we’ll kick things up a notch next year. 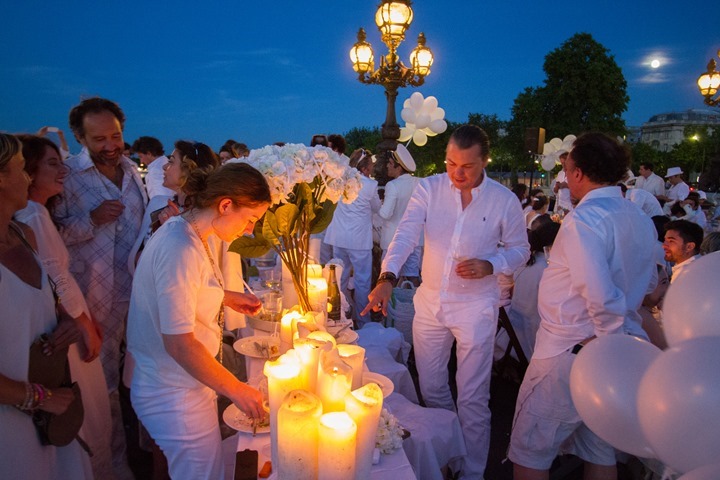 With about 30 minutes until the famed 11PM, it was definitely time for cake: 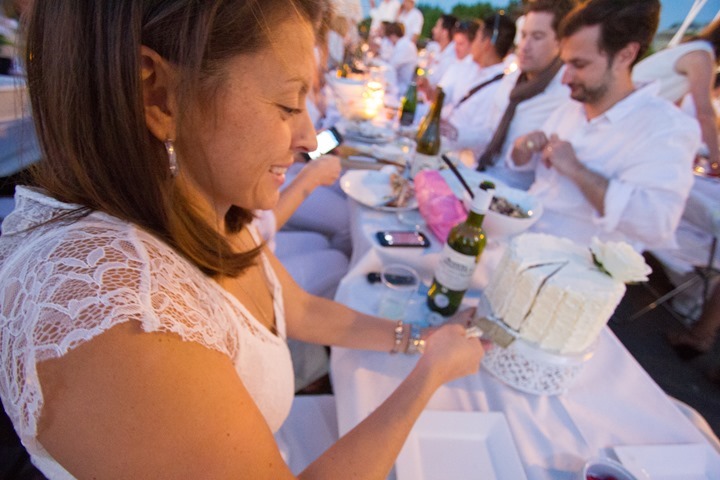 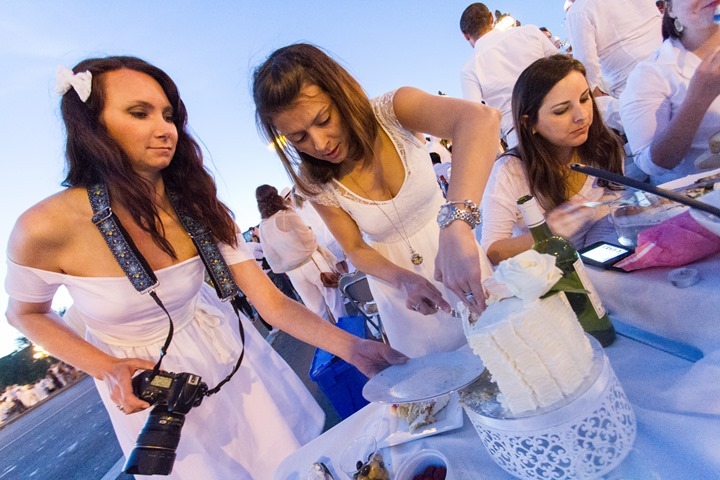 Oh – here’s our table.  Our group also spanned into the table to the right with the giganto awesome candle thing: 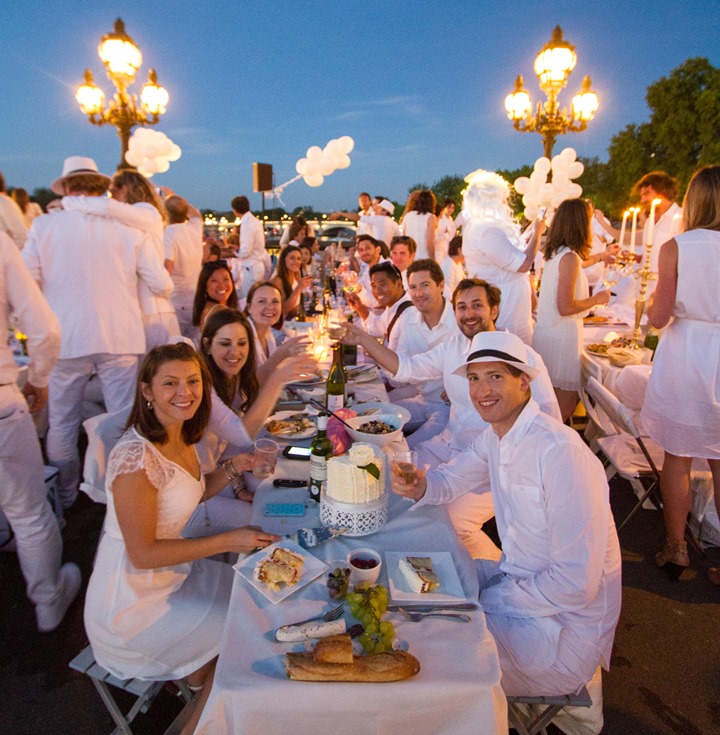 Earlier in the evening the organizers came around and gave out sparklers.  It was the single item provided by the organizers – everything else you brought in yourself.  The instructions in the e-mailed details earlier in the week were excruciatingly clear: Light the sparklers at 11:00PM, but not 10:59PM.

Thankfully, since the Eiffel Tower does its sparkler game every hour on the hour, it’s pretty easy for people to know when it’s exactly 11:00PM. 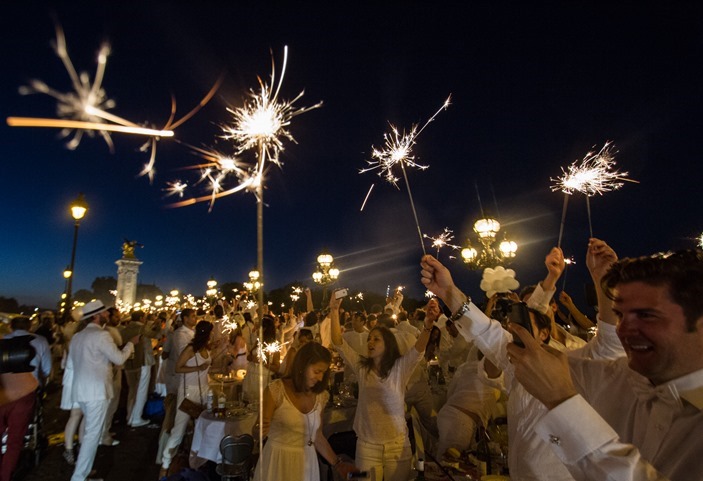 Thousands upon thousands of sparklers – all across the city.  With some 13,000 people participating there were groups everywhere from the Eiffel Tower to the Louvre (surrounding the little glass pyramid) to Notre Dame and I’m sure many other pre-planned places. 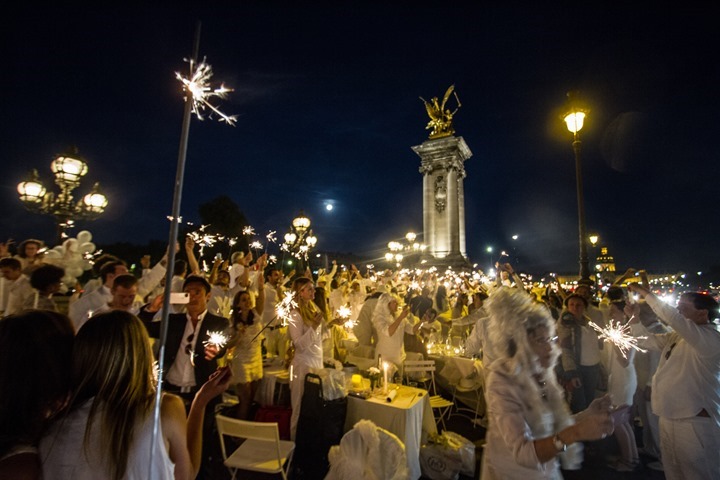 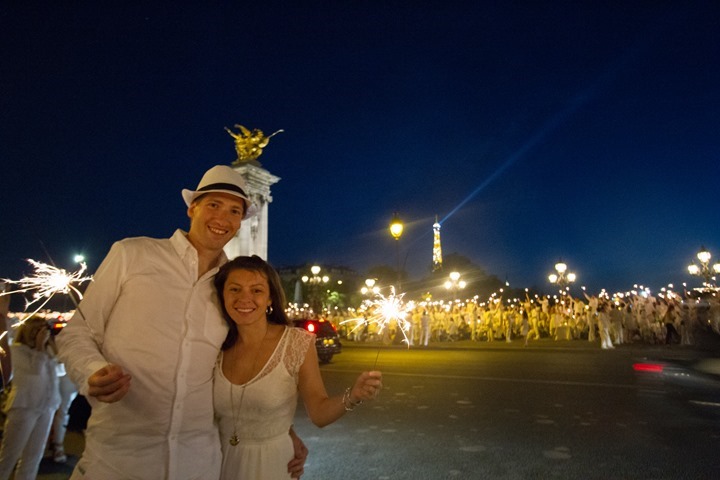 Because 13,000 people playing with fire wasn’t quite ballsy enough, someone provided about every other table with Chinese lanterns to send flaming into the sky. 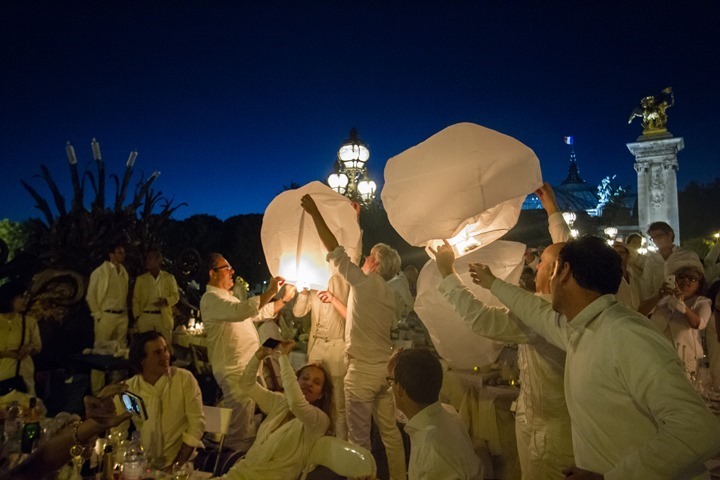 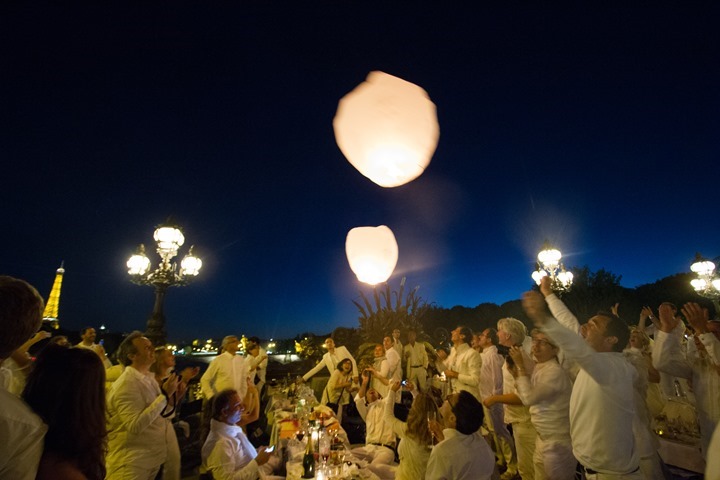 As a general rule, I wouldn’t normally provide large groups of mostly well-wined people with the opportunity to send flaming balls of fire over heavily fabric situations.  Don’t worry, only a few tablecloths caught fire.

All of the dots you see are lanterns floating impressively high: 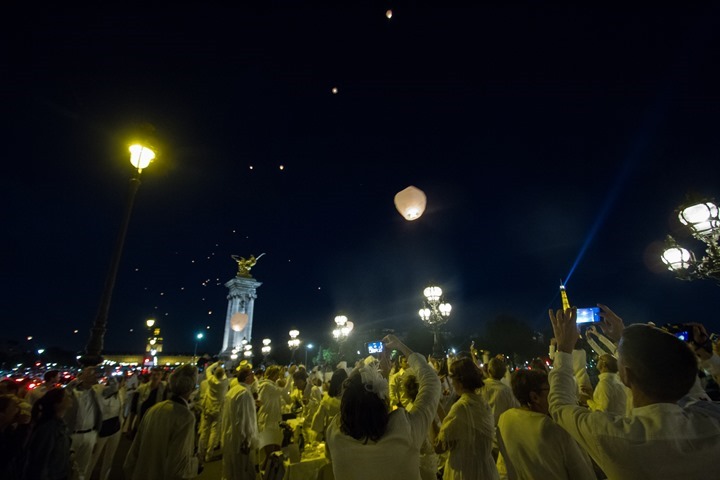 Finally, post-fireball it turned into a large dance party.  The rules were also quite strict on when you were allowed to leave (or rather, both allowed and supposed to): 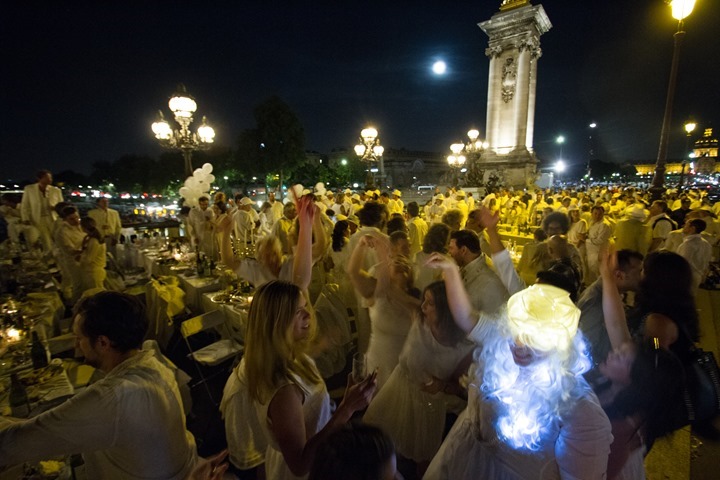 This guy below from a table next door takes the cake for best dressed of the night: 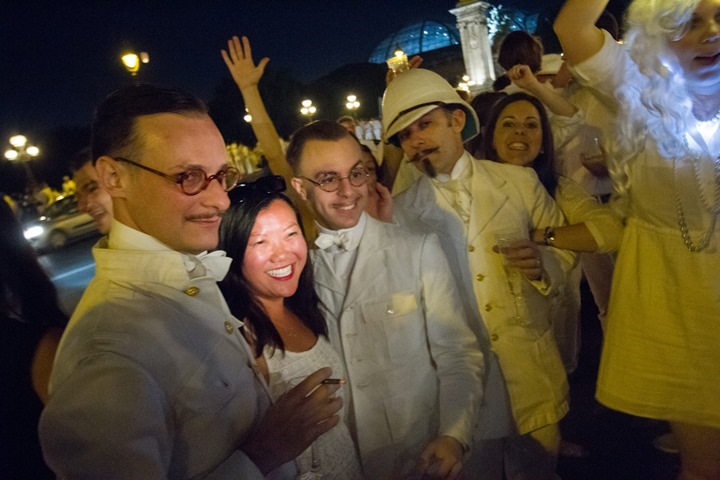 At exactly 12:00AM the lights on the bridge shut off, a bit of a warning signal that it was time to pack up and head out.  Given they don’t normally shut off then it was a well coordinated ‘time to leave’ message from the organizers and the city.

Soon the streets around Paris would be packed with people dragging home their tables and empty wine bottles.  As we got a cab home it was funny seeing numerous little mopeds with someone holding onto tables and chairs on the back. 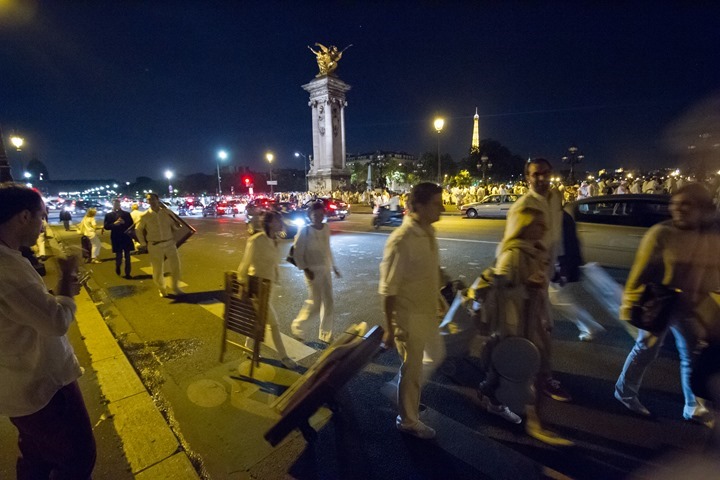 With that – the night’s over and we’re set and ready to enjoy the weekend soon.  And, we’re definitely looking forward to next year!