Regular readers will remember back a few months ago me mentioning that I was signing up for an early season triathlon.  Here in sorta-northern Europe, that means still indoor swimming.  Though, with the weather as of late it easily could have been done in nearby lakes/ponds.

Thus how I found myself this morning at the site of the Paris Super Sprint Triathlon, which stands to be the only triathlon this year actually in the city limits of Paris.  The rest of the tri’s are all outside the city limits, and the once massive and famous Paris Triathlon that was cancelled last year still hasn’t returned. 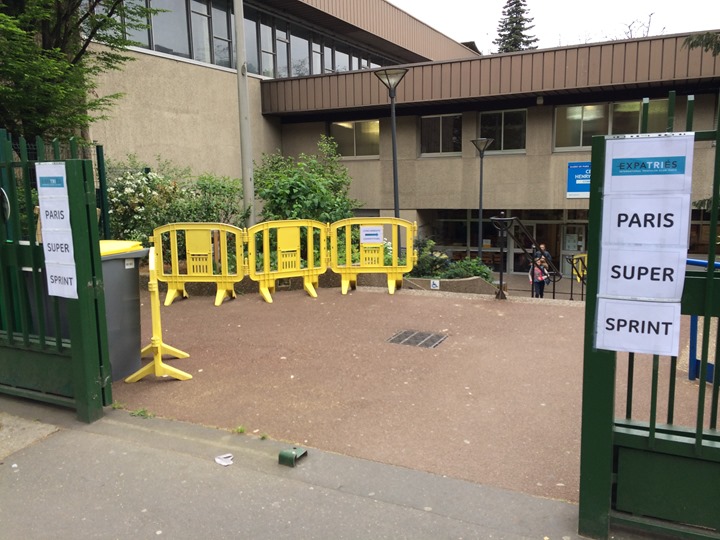 Getting to the race site was pretty straight forward.  I walked a few hundred meters over to a nearby metro line, and then caught one train about 10-12 minutes worth, and then made a quick connection two more stops for a couple minutes.  All in about 20ish minutes.

From there, another few hundred meter walk and I was at the site of the pool and overall fitness center.  The facility sits on the edge of the sprawling park on the eastern side of Paris, where many races run through – and many a cyclist’s ride loops around Longchamp.

The pool itself was closed for the day, and starting tomorrow remains closed for a few weeks of maintenance, so this worked out timing wise quite well for the event.

After arriving there was a simple desk at the front right inside to the left to check your name against a list and pickup your race bag with your race number, an optional swim cap, a yo-yo, and some nutrition from one of the race sponsors.

There was also a France Triathlon (equivalent of USAT) referee/official there to validate your medical certificate was in proper order.  In general, I was impressed with how many uniformed officials there were at the event.  I’m guessing at least three, if not more.

After heading down into the coed locker rooms (they have small changing stalls inside the shared locker room), it was out onto the pool deck to setup. 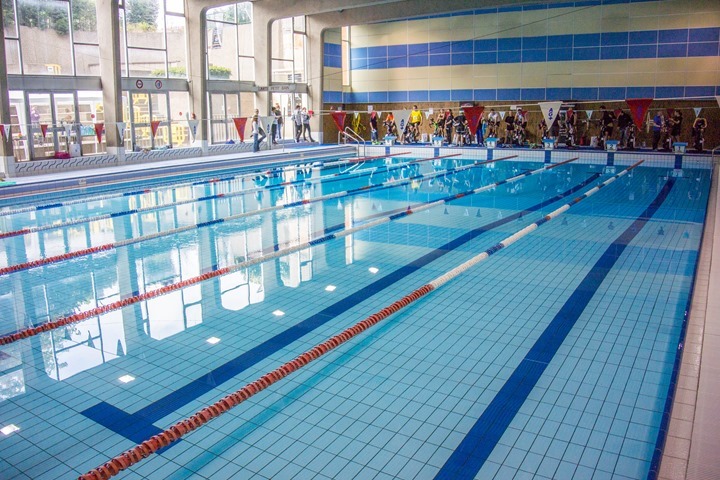 Along the window side there was a bit of an ‘on-deck’ lineup with lane assignments where you could stash gear during your race.  So I dropped a small bag over there, while I took a water bottle, shoes and swim goggles with me to the bike. 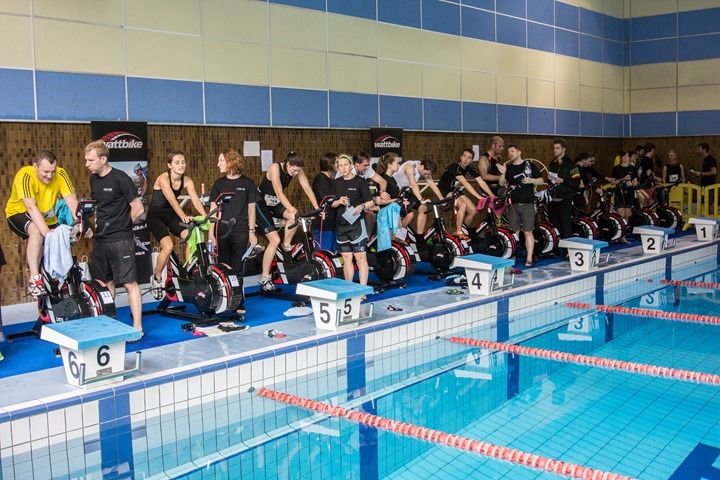 At the bike, I simply adjusted the height to seem roughly about right, and then made sure my running shoes fit into the pedals.  One thing I neglected to think through was that the Wattbike’s they were using recently got ANT+ support, so in theory I could have had it broadcast to my Garmin.  But, that thought didn’t illuminate until about 2 minutes into the bike segment.

In any case, with those set – I met my lane counter (who also happened to be a DCR reader), and got ready for a dip in the pool. 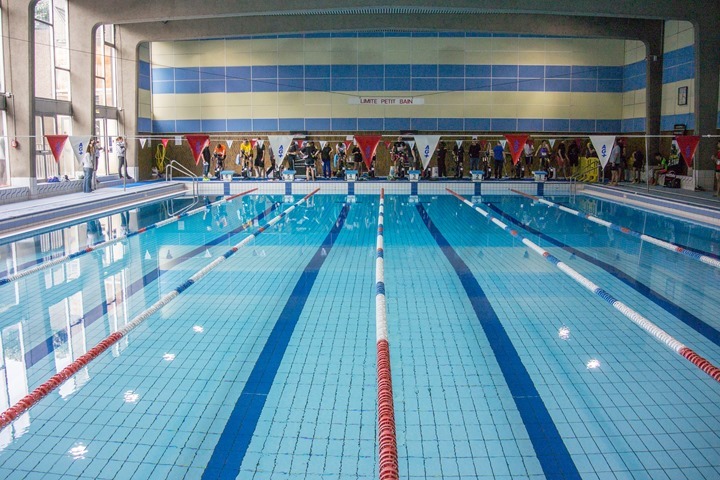 Like most indoor tri’s, the swim segment is setup in the pool such that you have the full lane or half a lane, and then a lane counter to validate your lengths.  With indoor tri’s there tends to be two formats for how the swim is done.  The first is a distance-based race where you go a set distance and your time is what it is.  The second is a time-based format where the distance is variable depending on how fast you are.  Both have pros and cons, but the set-distance format tends to be a little easier to keep track of.  That’s how it was here.

The race was a simple 300m swim in the 25m pool.  Thus, I went ahead and set the Fenix2 for a swim alert at 275m, just in case I forgot, coming back down on that last lap.

Then, right on target per the published schedule, at 10:30AM my wave let loose.  I believe there were 12 swimmers in this wave, since there were six lanes each with two swimmers.  I got off to a good start and pretty much held either the lead, or tied for it, for the duration of the swim.  There was one other guy who was roughly swimming ‘with’ me a few lanes away.  It worked for pacing.

Below, an underwater shot of me coming up on the wall about one second away from doing a flip turn.  It’s with the VIRB without the underwater case, so it doesn’t really focus – but that’s fine. (Oh, and thanks the Mark for shooting the below.) 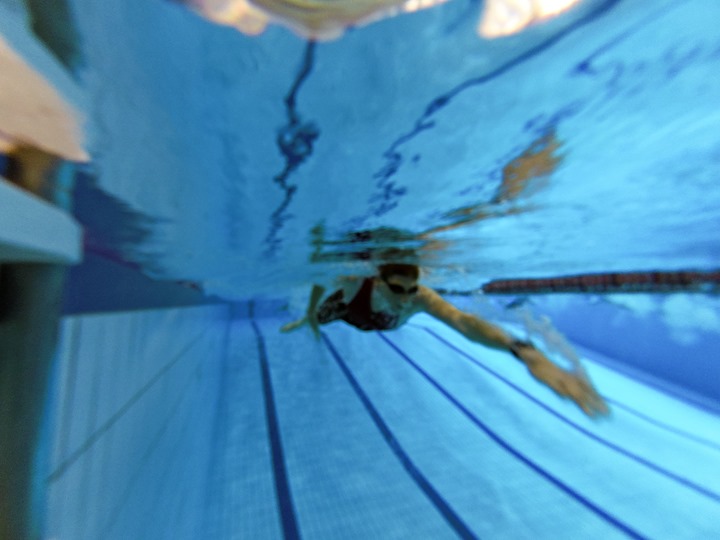 And no, my form’s not awesome.  But then again, my swimming has been rather limited this winter.  Thus, I’ll take anything above drowning as a success.

My total 300m time was 4:34…not exactly the pinnacle of my aquatic prowess, but again, it’ll work.

From there I jumped up onto the deck and started my 10-second mandatory toweling off time.  Or, in my case, shaking off time. 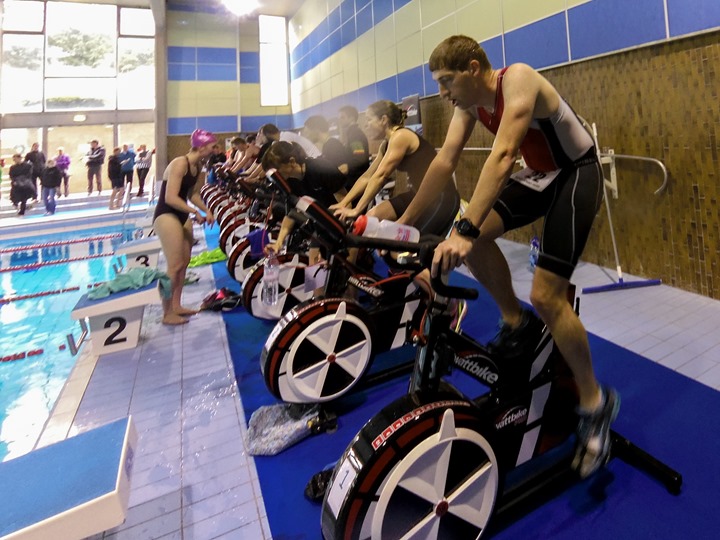 With the water behind me…err..ok…figuratively behind me, it was off onto the bike.  For the event they were using Wattbikes and had them setup such that all riders were riding a 7KM course.  If you look at the white fan portion seen above, you’ll see there’s a little triangle sticking out.  This allowed you to adjust it a bit to increase or decrease resistance, sorta like gearing.

If you decreased resistance than you went slower.  All of this was communicated to you on the display on the top of the bike: 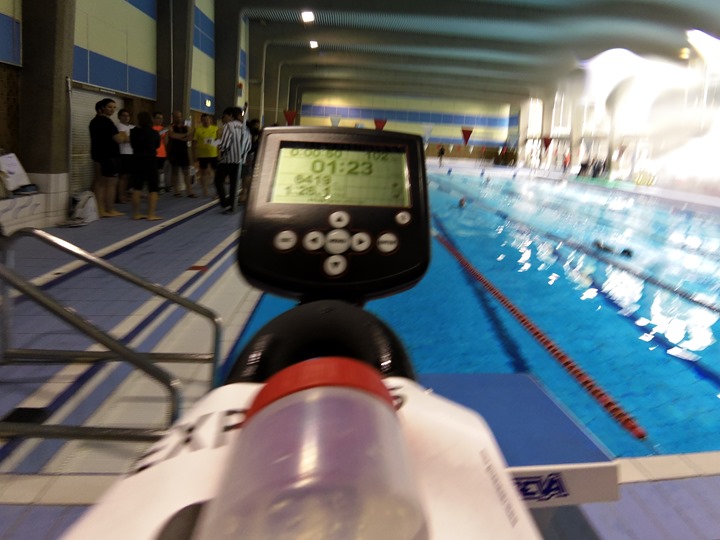 In my case, I’ve got approximately zero experience with Wattbikes, so I wasn’t quite sure what to pace off of here.  And I was slightly afraid of touching the display and screwing up something.  So while I’m sure it would have displayed power, there wasn’t a chance I was going to dork with it and have to re-do mileage.

Instead, I mostly just followed heart rate and perceived effort.  My heart rate was reasonably consistent the entire time, about 172-174bpm, roughly, after the first 90 seconds or so.

(In case you’re curious, the above is what happens when I get a new watch and forget to turn on 1-second recording.  Oh I hate smart recording…)

On the pace, that was also reasonably consistent.  It was showing 1:24ish per KM.  And I kept my cadence slightly higher at 102RPM.

Again, I probably could have adjusted the resistance slightly harder and reduced cadence and probably gone faster.  But the effort felt hard enough to still be able to run with some speed.

In the last 30 seconds or so, I went ahead and eased up the resistance and increased cadence to give the legs a tiny little break before tackling a flight of stairs.

I ended up finishing up my bike segment in 10:24, and, now that I look at the scorecard that was given to me, it seems to note that my average wattage was 283w.  Thus, clearly, I probably should have pushed harder (since I would have been more than capable of it).  On the flip side, I did have one of the faster bike splits of the day.  Live and learn. 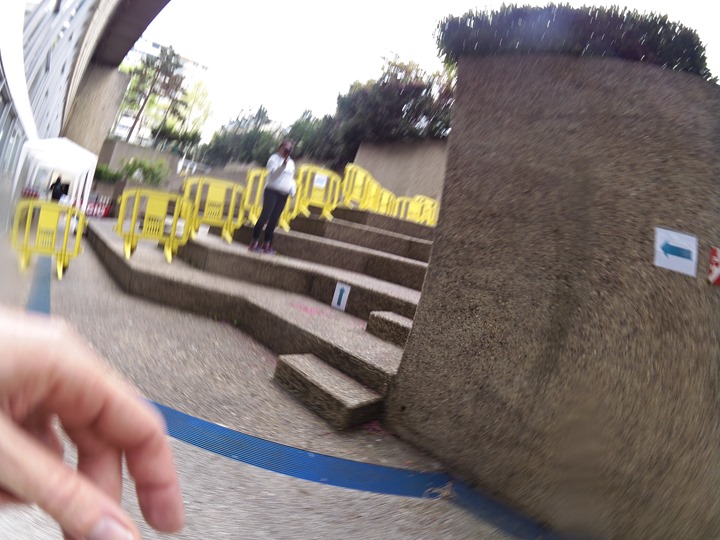 With the bike done, it was time to head out on the run.  First though, I had to get out of the giant hole that the pool was built in.  And that involved running up the stairs.  The stairs sucked.  A lot.

While not terribly long, it as the fact that they were all of 20m from where you finished cycling.  There was no ‘T2’, nor apparently, an elevator.

Once the stairs were done I was out on the flats.  Finding satellite reception took about 30 seconds or so, due to the fact that I was coming out of the giant concrete hole and that I was moving pretty quick in a wooded area.  Not that it honestly mattered.  For a 2.5K run, you just run.  And keep on running.  I didn’t look at my watch once for pace or heart rate.  Simply for distance.

The route was held in the small wooded area around the pool.  Lots of zigs and zags, like a PacMan layout.  But, it was incredibly well marked (I’ve never seen any run course anywhere this well marked).  And there were volunteers at every turn.  I don’t think you could have gotten off-course even if you were blindfolded and two bottles of Bordeaux deep. 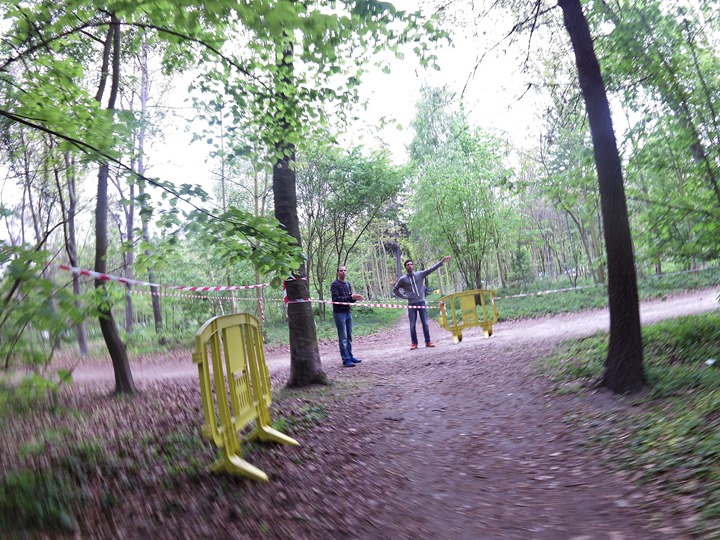 I just ran as fast as my sorta-kinda-tired legs would take me.  Since I have been in running training mode lately, and not really in triathlon mode, I haven’t done any brick workouts that I’d usually do (and will start doing in about a month). 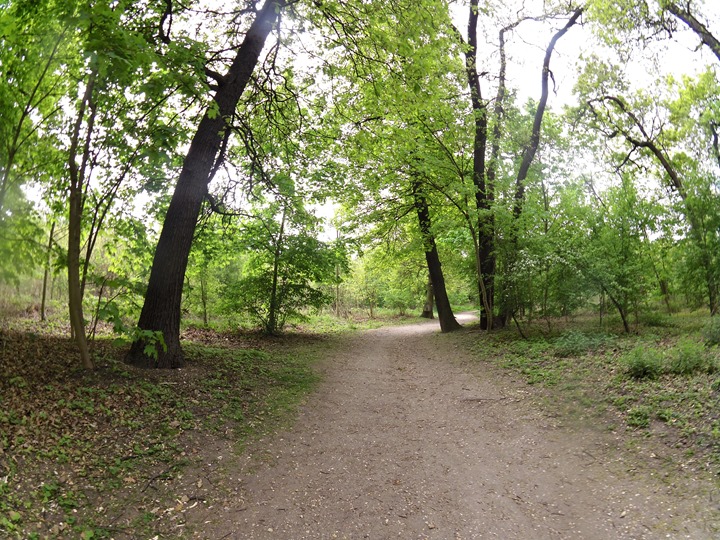 I forgot how much the whole brick thing kinda sucks.  But, I also know that it simply just takes regular workouts structured like that to get used it.  I’m usually quite good at running off the bike. Post-finish line they had a nice spread of drinks and little snacks setup outside the pool.  I even noticed a restaurant sized bag of fresh baguettes down below the table likely for lunch a bit later.

They also had the timing desk setup outside and were updating results and splits in real-time to an online site and a large TV screen.  They were simply using Google Docs, but it was an easy solution that worked well. Plus, they gave you back your timing card as well: 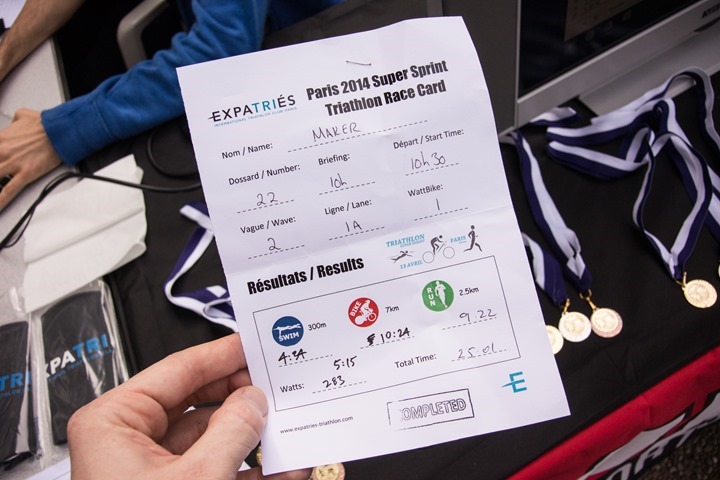 Immediately following my race, I had to run off to the subway (no really, I had to actually run) in order to make it to my next event/run/race of the day before that started at 12:15PM across town.  But I’ll get into that some more tomorrow! 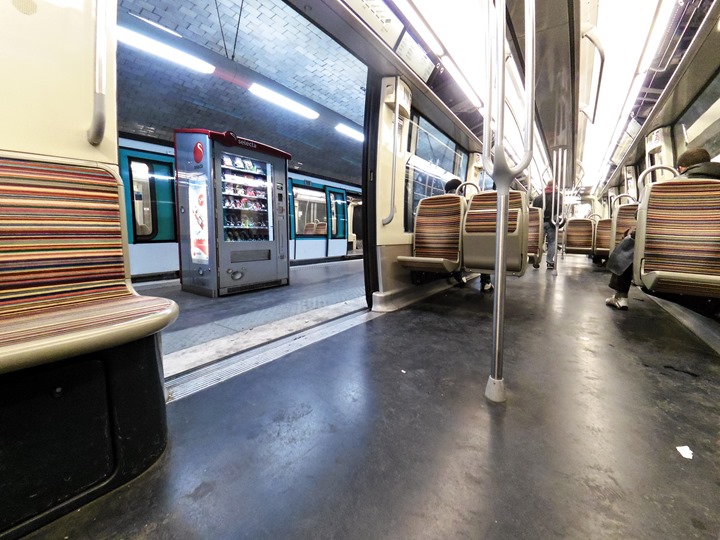 Later on though after the other event, I ran back over to the triathlon to see if I’d make the cut for the finals.  See, the top men and women raced again for the final trophies.  And while I did make the cut, I didn’t quite make it in time.  Despite all my further running, I got there about 2-minutes late and they had just started swimming again.

Not that I’m honestly that worried/upset, given I was fairly exhausted at this point (3:20PM) since I hadn’t eaten anything all day, and had been literally running around all day long.  So instead I hung around and watched the remainder of the finals and then the awards. Overall it was a great event, and I’m looking forward to next year, especially considering this was a first-year event.  Things ran incredibly smoothly, as if it had been run for years.  Great stuff.

Thanks to everyone that said ‘Hi’ at the event (and also the woman that was out running past Notre Dame on my way to the tri early in the morning).

Have a great week ahead, and look for my second ‘Race’ report coming up tomorrow!  That one is much more…uhhh….colorful!