Swimming, Riding, and Running (and sightseeing) our way around Israel

After wrapping up work late Thursday evening, I was ready to join The Girl in enjoying the rest of the weekend wandering around Israel and checking out the country.  It would of course be a bit of a whirlwind tour, but that’s definitely better than no tour (and, the weather definitely better than rainy Paris).

Swimming in the Dead Sea:

Longtime readers will remember the last time I swam in the Dead Sea, while in Jordan, back a few years ago.  The Dead Sea is notable for a few reasons.  First, it’s not really a ‘sea’.  More like a big lake.  Seriously.  You can see the other side of it in the photos a bit below. 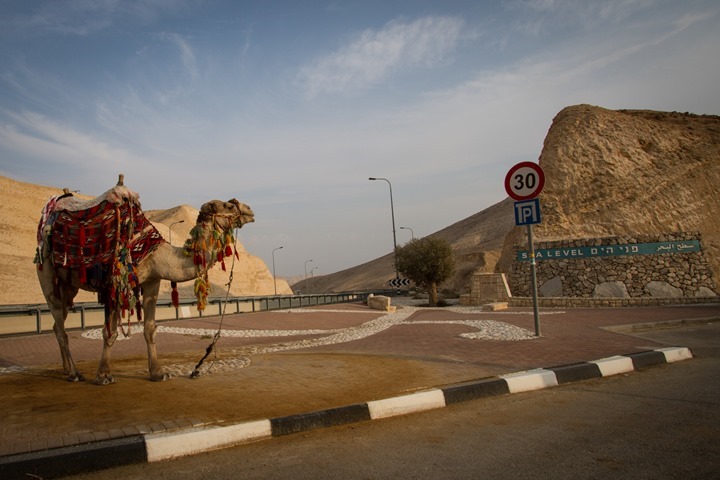 Third, the Dead Sea is particularly attractive to tourists because of the amount of flotation that you’ll exhibit.  Far more so than typical salt water.  This is because the body of water has a salinity of 34%, more than 10 times that of your average ocean, which is about 3.5%.

The sign upon entry to the beach area reminds you of the many things you shouldn’t do.  These are mostly quite overdramatic.  About the only thing of note here is that the water will sting in any cuts/scraps and or if you get it in your eyes. 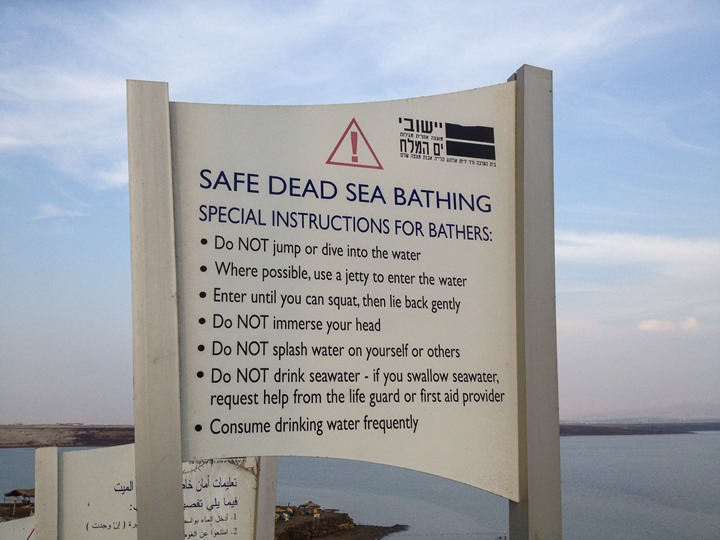 Now, the term ‘beach’ is probably a bit luxurious sounding.  If you look back to when I did the Dead Sea last time (when I just found a random spot on the side of the road), you’ll see that it’s pretty much the same.  The shore is lined with thick quicksand like mud that cakes onto anything. 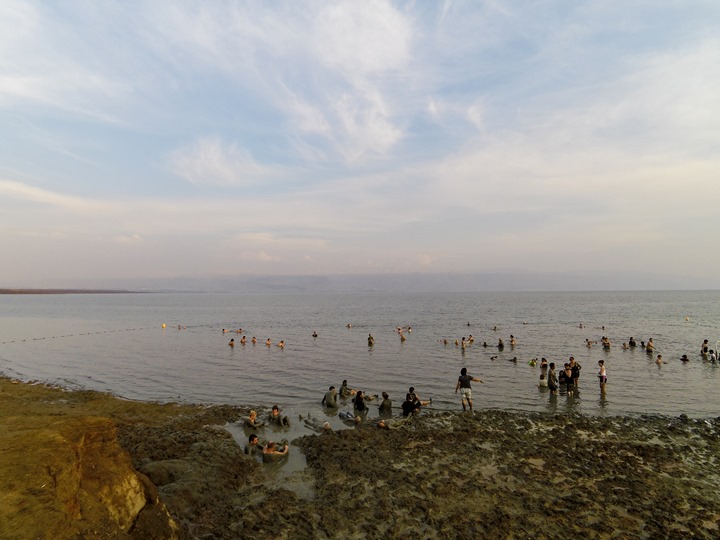 And on shore, the decorative features leave just as much to be desired. 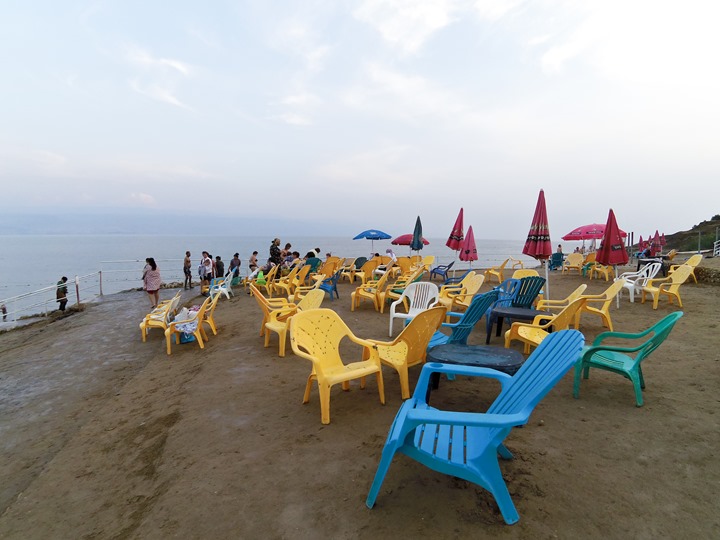 But in the water, the real attraction is the flotation.  While many people take photos of themselves floating on their backs.  We thought this photo helps illustrate the point much better.  The Girl is easily floating with her arms and legs out of the water, staying buoyant like a buoy. 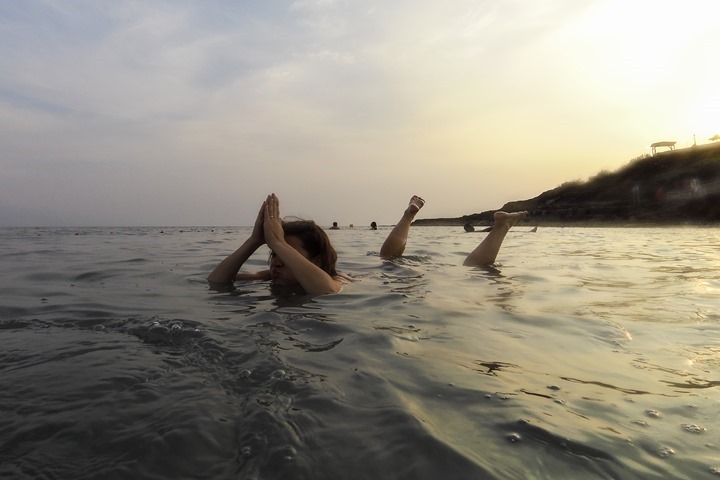 And of course, back at the mud, the ‘in’ thing to do is to get all caked up in mud. 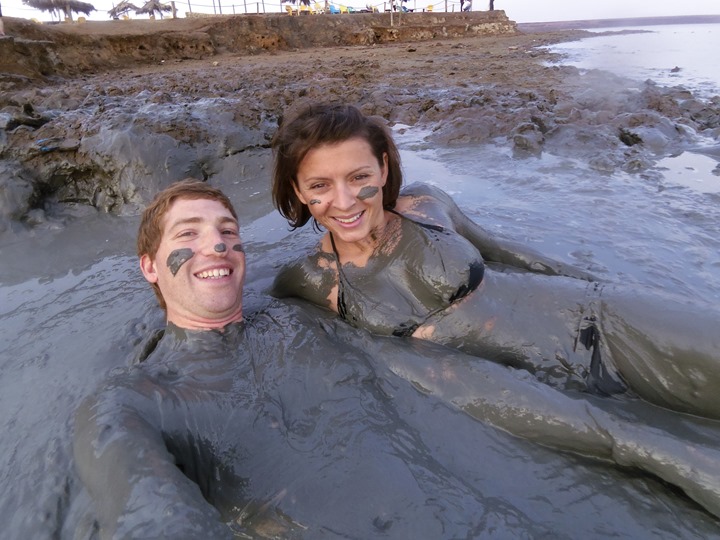 Apparently, the other ‘in’ thing to do here is to get wedding-style photos taken.  This couple started taking photos shortly after we arrived.  Initially, they were somewhat normal, up on the bluff a bit.  Over time however, they slowly morphed into what in most countries might pass for an adult movie set (click to expand):

…and a bit of Swimming in the pool:

In addition to swimming in the Dead Sea, we also enjoyed a bit of down time at the pool.  This gave me an opportunity to bring the flotilla of action cameras into the pool.  Now this particular pool is actually a legit 25m lined pool that’s used in the morning by what appears to be swim teams (I was regrettably up that early two mornings). 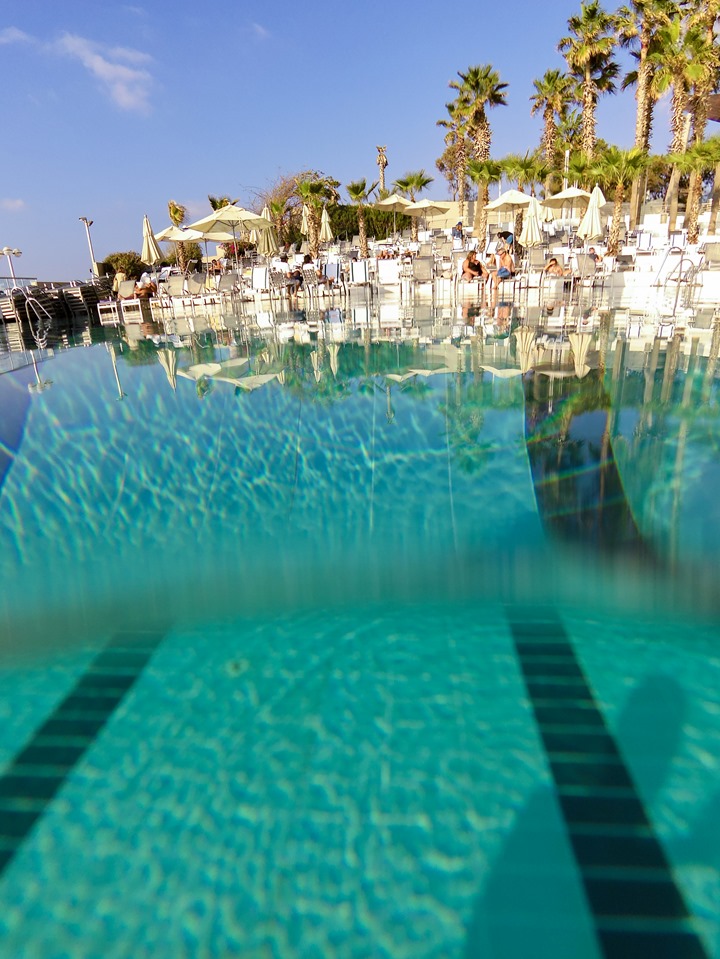 I had all the action cameras in there testing things like the ability to focus underwater.  For those curious – the Virb created the above shot.  Though, the Virb’s were not able to focus while underwater (without the dive case, which I lack).  This was notable because the latest Sony AS-30 Action Cam also can’t focus underwater – even with its little case.  The GoPro, JVC and Pyle $99 action cam all had no problems focusing underwater.

I had a few runs scheduled.  I did one of them – a shorter run – during the day directly from the hotel.  You’ll note that in many middle eastern countries, Friday and Saturday are considered the weekend – and the same was true here as well.

Along the waterfront there’s a nice long running path, which eventually wanders into a equally long park.  One could easily run a marathon’s worth of distance in here without repeating themselves.  You can see the path along the water down below. – with the beaches that stretch on and on.  Interestingly, one was not permitted to swim in this particular area.  It’s not clear why. 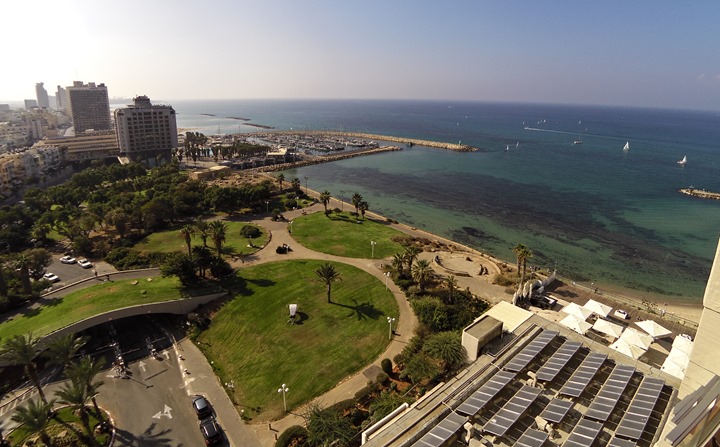 During the daylight hours there was a near constant stream of people on bikes and foot on the trails.  Perhaps overly so that it reminded me of packed trails back in Washington DC on a nice spring Sunday morning. 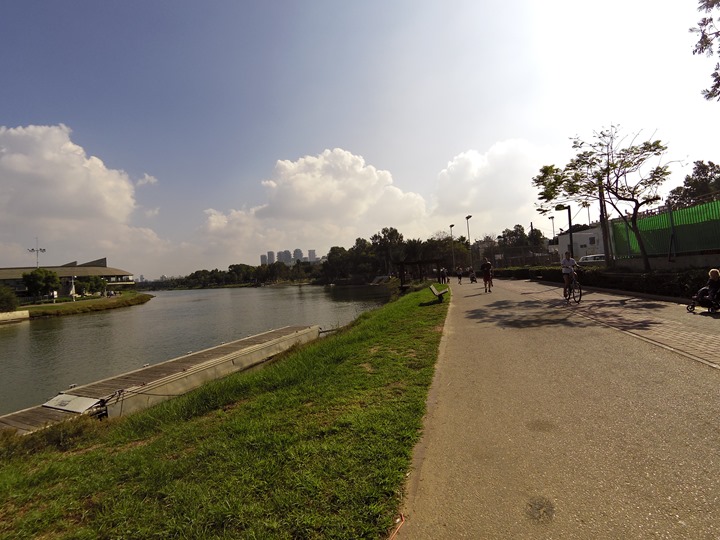 But, I also went back out onto these trails for a late night long run.  I started around 10:30PM and finished up a bit after 11PM on Sunday night.  We had spent the day wandering around the country, so this is when it fit in best.  Like before, I left from the hotel and went along the path: 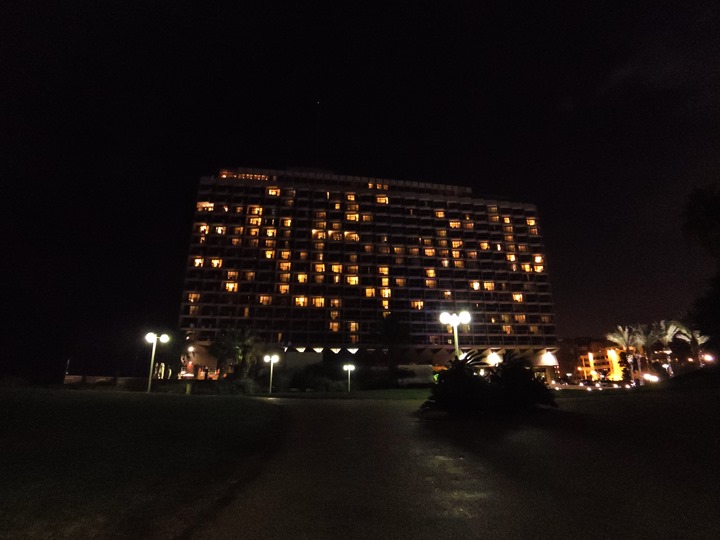 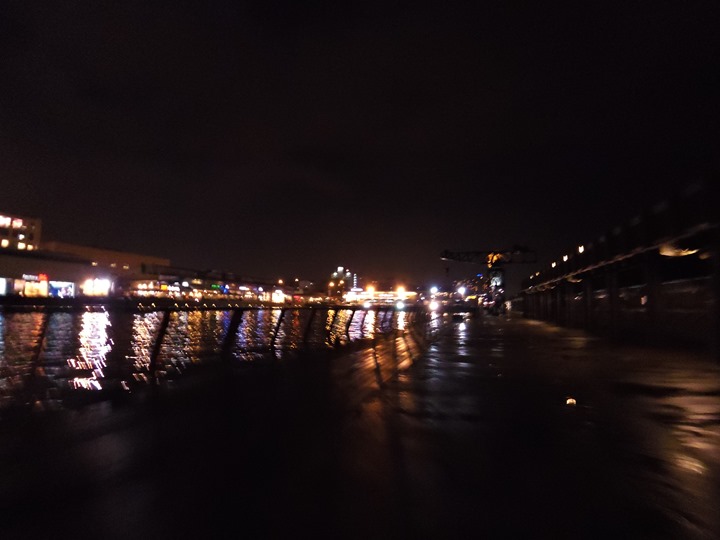 Then, I turned into the park.  Even at 10-11PM, the park still was well lit and had numerous people out running (both men and women).  I got a wee bit lost in there for a while, but still managed to make it work out distance wise.  The fog in some areas was pretty dense, and the maps pretty few and far between.  It’s an awesome area, but it’s easy to get lost at night. 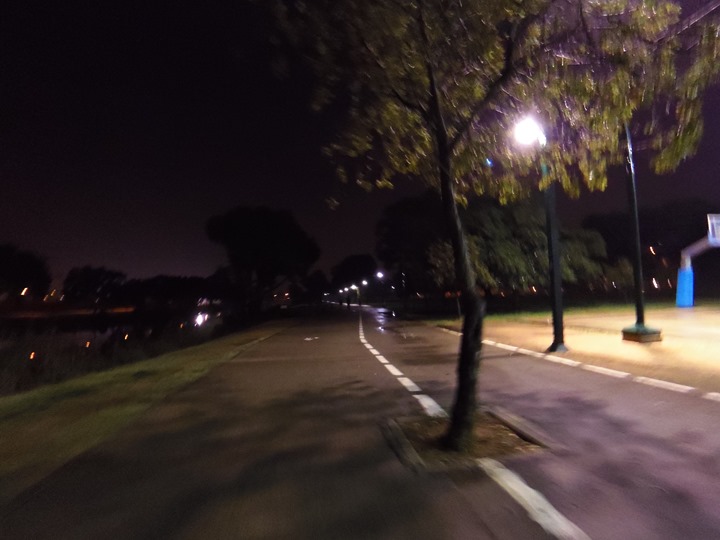 While lost, I stumbled into two things that gave me pause.  First, was the below large stadium.  I noticed what appeared to be a large Olympic torch at one end of it.  Yet, I have no record of the Olympics being hosted in Tel Aviv.  Second, across the way the track that you see below has the Olympic rings on it.  Again, no record of such Olympic games occurring in the country.  Perhaps the locals can help me fill in the blanks a bit. 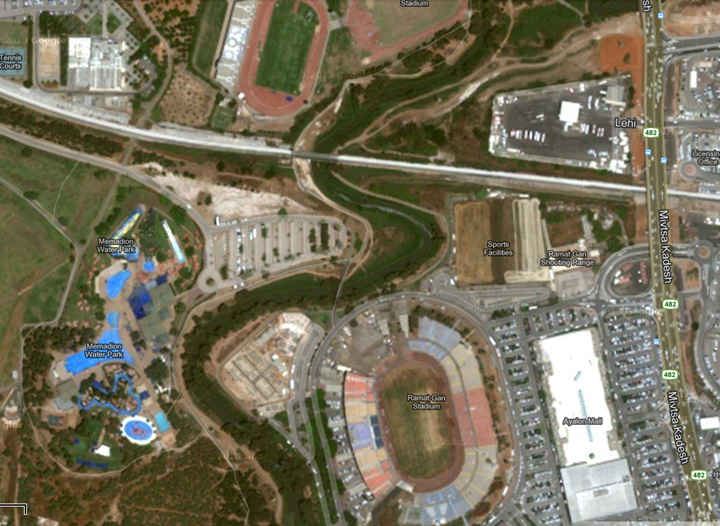 Speaking of which, I need a bit of assistance identifying an animal I saw (repeatedly).  Now, I recongnize my photo isn’t terribly helpful (actually, it’s totally useless).  While running at night, both on my run, and on The Girl’s run, I saw what appeared to be a small coyote.  Definitely too big for a fox (which, I think are typically smaller).  Roughly the size of a dog, but with a long tail.  In both cases it wasn’t actually terribly afraid of me though.  I’d be curious what it was, since I assume it must be common since I saw it multiple times. 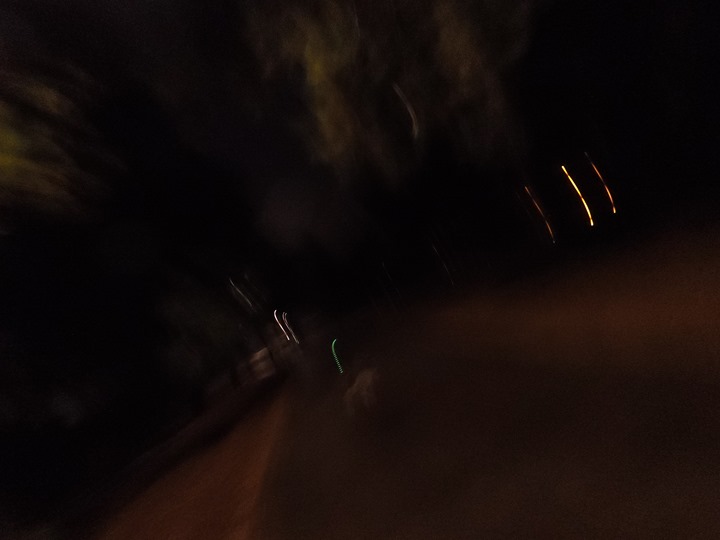 Finally, post run, I noticed they emptied out a large outdoor swimming pool late at night.  The pool sits on the water’s edge, so I suspect it’s filled with sea water.  However, by the next morning it was filled again.  I’d be curious if this is a daily/weekly/whatever thing. 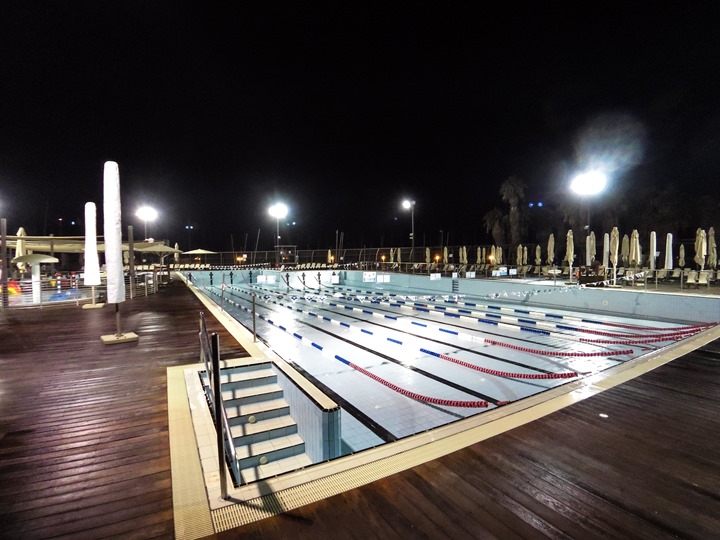 Less you think it was all about swim/bike/run, here’s a few other things we wandered to.

First, we drove up north to see the Basilica of the Annunciation in Nazareth: 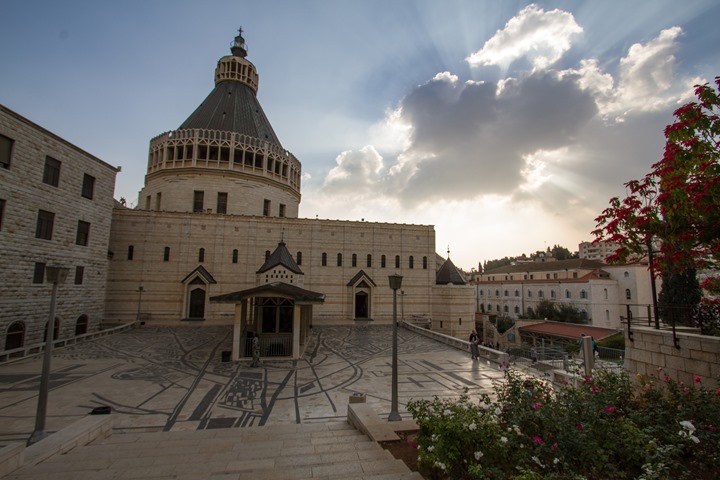 Then, we drove across vast amounts of desert: 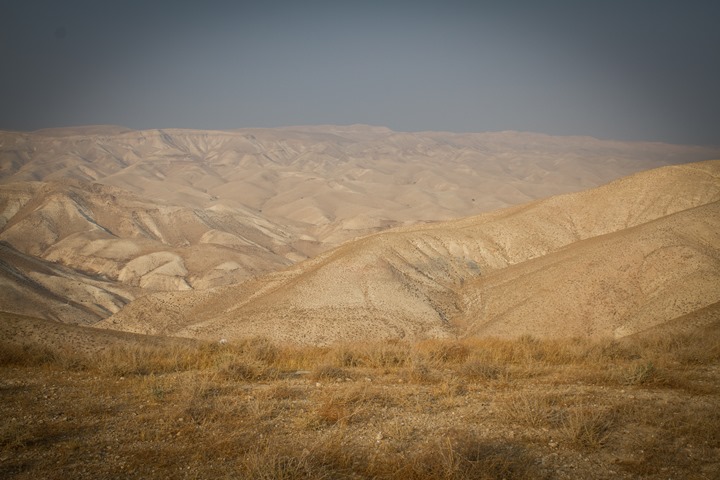 Thankfully, our rental car didn’t die (though, it wasn’t happy about some of the climbs): 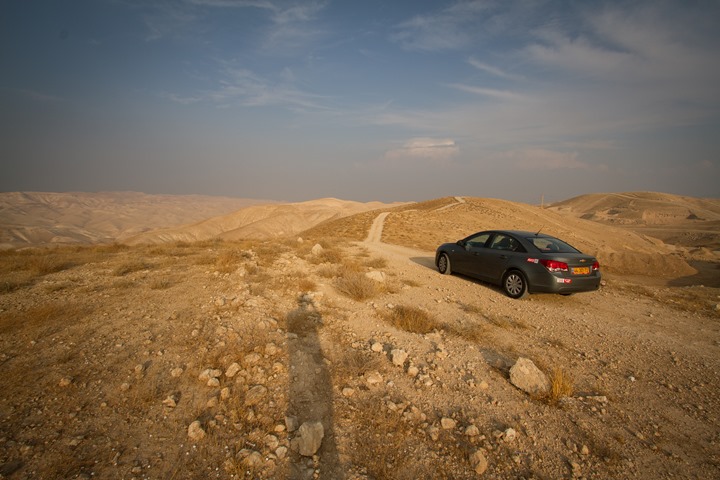 We drove to Jerusalem to see the Western Wall: 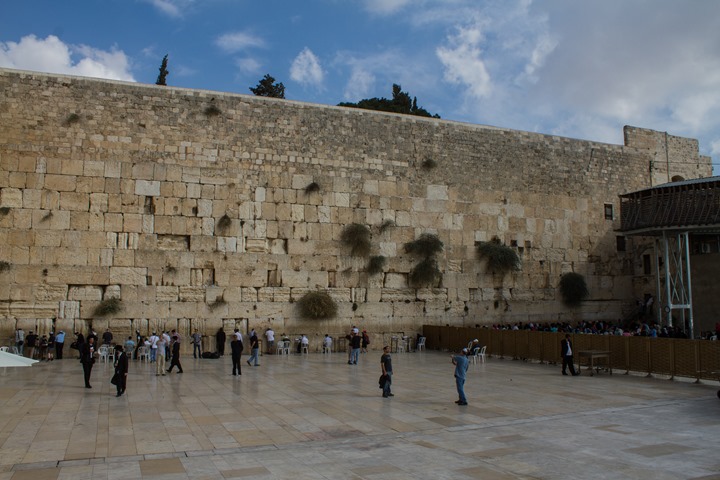 And we wandered through the Old City while there: 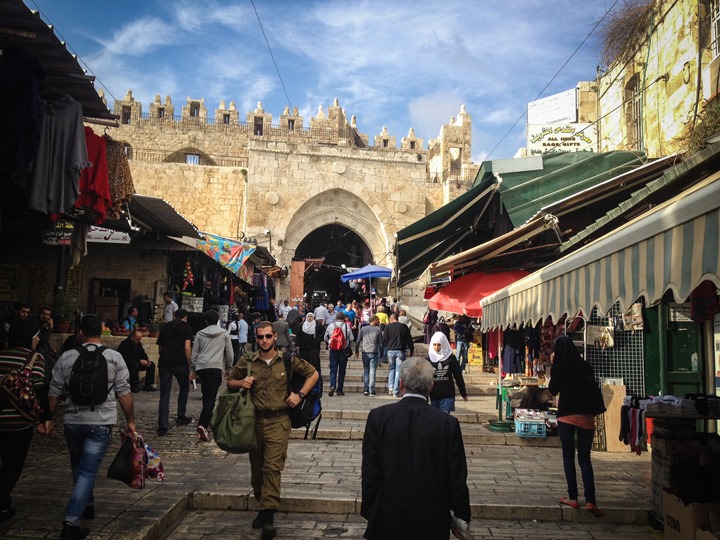 In said Old City we went from one place of food to the next.  For example, spices: 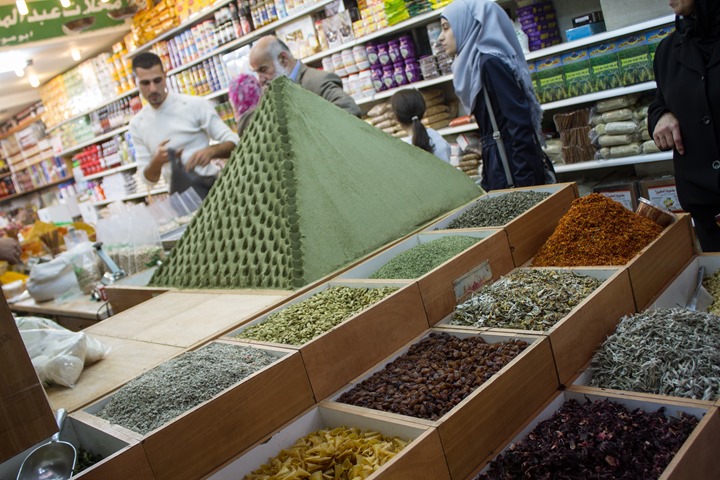 And like up north in Nazareth, there was fresh squeezed juice as well.  In this case, we got Pomegranate: 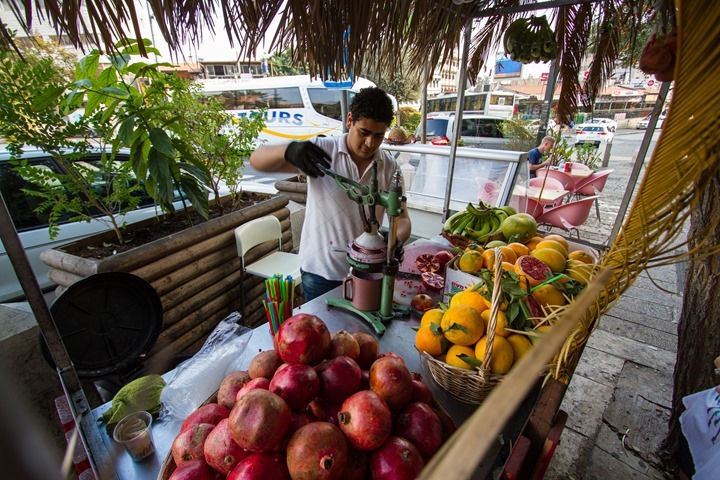 And baklava.  We ate a lot of this.  Excessively so some might say. 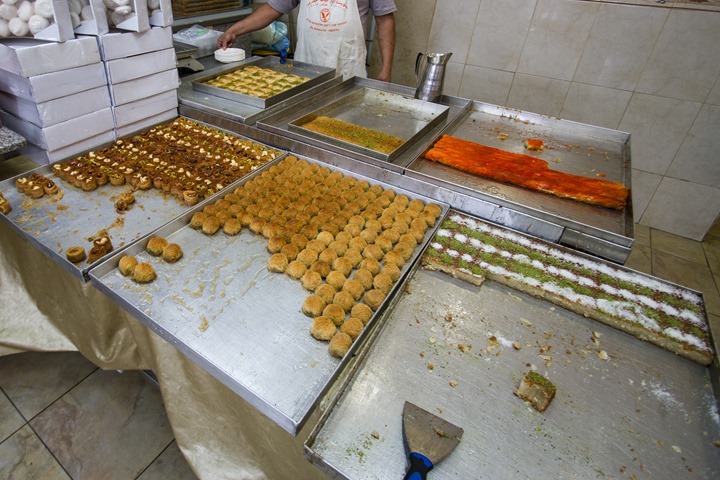 We also indulged on shawarma (I love them, I learned that during a 6-week stint I did in Bahrain some years ago), as well as all sorts of breads.  When in doubt, we ate it and hoped for the best.

Riding into the night:

Last but not least, there was a late night runaround.  It started at about 12:10AM on Monday morning, and would constitute The Girl’s long run.  She had stayed in while I had gone out for my late night run.  So once completed with mine, it was time to accompany her on hers.

I actually thought it would be quite fun.  There was a bike-sharing station just a few hundred meters from the hotel. 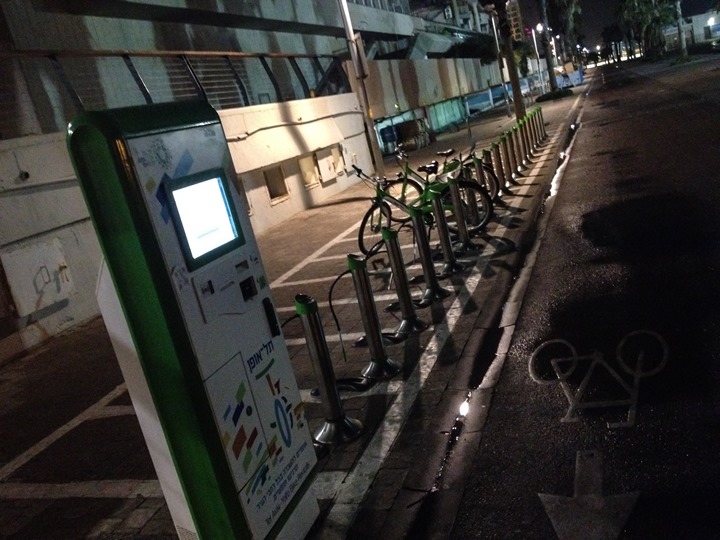 In our case, we’d need it about 2hrs, so we’d pay a bit extra, but that was fine.

Her run would take us on similar paths as mine, but then some of the lights had been turned off in the park, so we looped back to the waterfront sooner.

I had brought along a Diet Coke with me (favorite!), you can see me here pedaling alongside while holding the Diet Coke.  The Diet Coke cans here are all long and tall, more like a Redbull can than a traditional Diet Coke can. 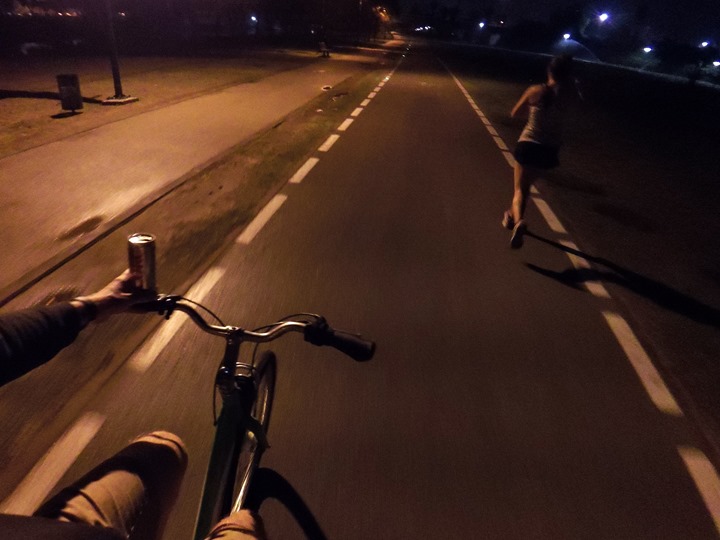 Also of note is the little green lights along the paths in the park (seen above on the white line).  These were almost identical to taxiway lights on airports, in that they’re embedded into the pavement.  They’re awesome in the dark fog because it makes it really easy to see where the path goes next.

The run went quite well, and it was great to get out and enjoy some two hours just pedaling alongside her.  Plus, it’s nice and quiet then too.

We finished up around 2AM, with both of us definitely ready to scope out the late night room service menus.

With that – we’re back on the plane home, ready to begin a few days in the city before heading down to Florence for the Firenze Marathon this weekend (I’m running).

Lastly, I want to thank those (awesome) readers that met up with last minute notice.  Many had reached out last week when I mentioned I was coming to Israel, but unfortunately I wasn’t able to solidify my plans until about 24 hours ahead.  Still, a group of us had a nice dinner.  Regrettably I lack photos (but others have them!).  I look forward to doing similar things in future cities.