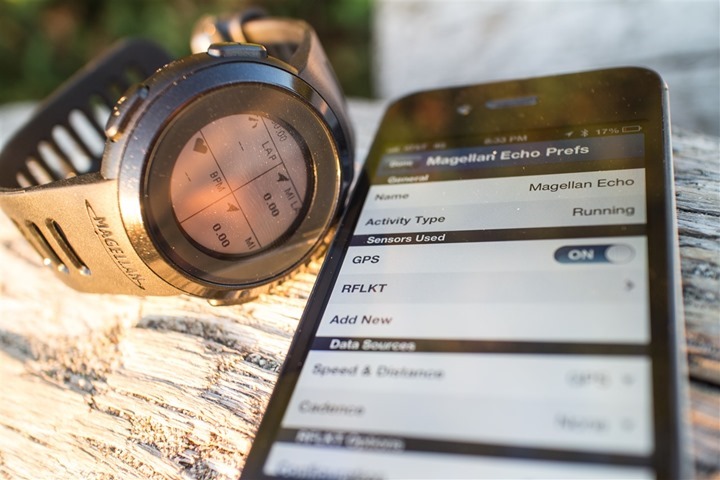 This morning Magellan announced their newest entrant to the fitness market – the Magellan Echo.  Unlike many running watches, this unit takes a bit of a different approach to things.  Instead of containing a GPS chip within the unit, it leverages your smartphone to drive the experience.  Meaning that it uses your phone’s GPS in place of a traditional GPS chip in the watch, and then all of the configuration aspects are controlled via your phone.  This results in a lighter unit as well as a cheaper unit.

For some, this may remind you of the Wahoo Fitness RFLKT cycling computer which hit shelves earlier this year.  And that’s definitely true.  So true in fact that they share the same platform.  Magellan partnered with Wahoo Fitness in developing the watch, leveraging the same application programming interface (API) that the Wahoo RFLKT has.  As a result, this makes the Echo the first ‘open’ running watch.  Application developers can customize and configure any aspect of the display.  In effect, it’s a ‘blank slate’ of a watch for app developers.  But if you want to simply use it as a running watch without any 3rd party apps, it can do that as well.

I just received the watch yesterday – so my time is extremely limited (I actually met them at the airport in San Francisco for an Ocean’s Eleven style hand-off rushing out to the curb and back in again).  But, I did want to give you a first look at things, and in addition, a place to ask any questions. 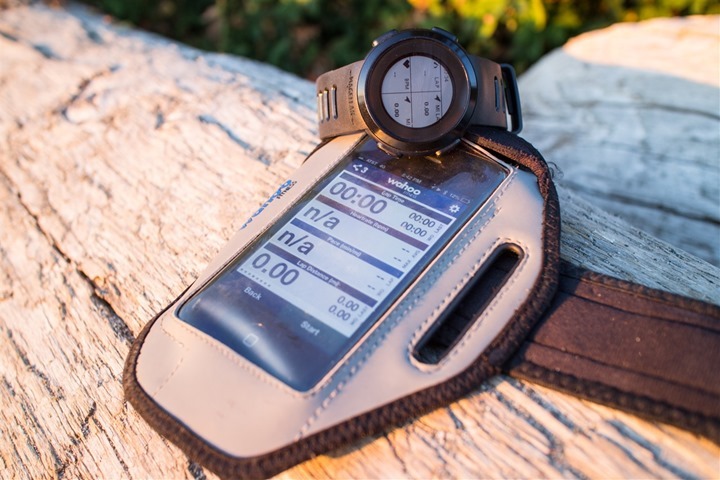 Because the watch is driven by your smartphone, it’ll require your smartphone be in range to run with it.  Think of it like a Bluetooth headset.  You can’t just talk into the Bluetooth headset a mile from your phone and expect it to work.  Same rule applies here.  So if you go out on a run, you’ll need to bring the phone along.

When you don’t want to run with it, it’ll simply display the time and date.  They have a utility that allows you to tweak this display slightly (for example, the formatting). 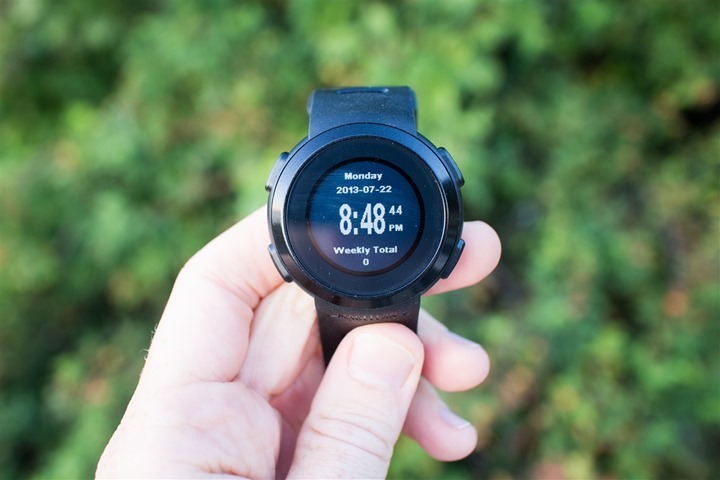 You can also invert the display.  Via the utility you can do white text on the black background, which you can see above.  Or you can do black text on a blank/white background, like below. 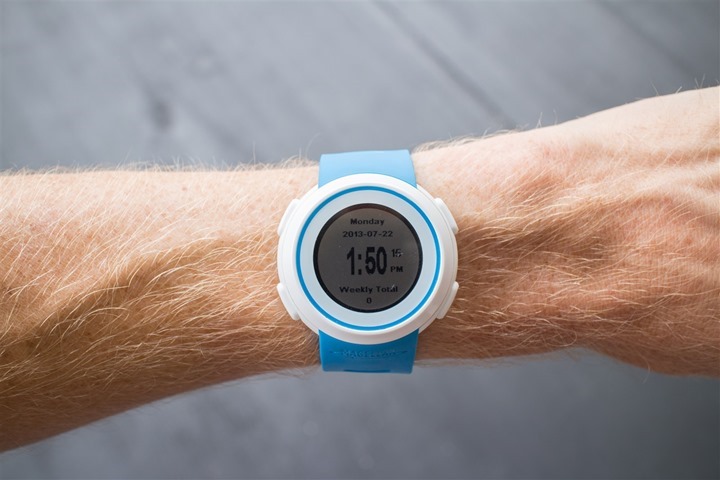 When you’re ready to go for a run, you’ll go ahead and pair up the watch to the phone.  Today I’m using the currently available version of the Wahoo Fitness app to demonstrate this.  That will continue to work, but down the road by release you’ll see this customized a bit more (both on a Magellan app side, as well as the Wahoo app side). 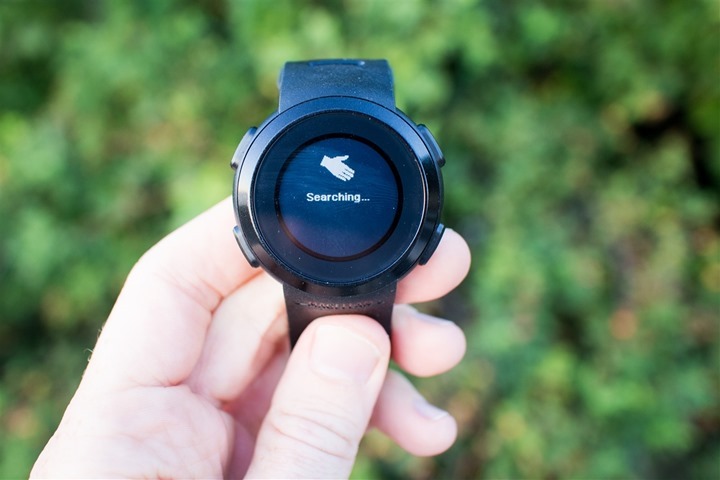 On the watch itself, to start the connection sequence you’ll just tap the button and it’ll connect.  The device uses Bluetooth Smart, which is a subset of Bluetooth 4.0 (which is a specific chipset level). This means you’ll need a Bluetooth 4.0 capable phone.  Right now that means any iPhone 4s or higher, or latest generation iPods or iPads (though, if you run with an iPad taped to your chest, we’ll need to chat). 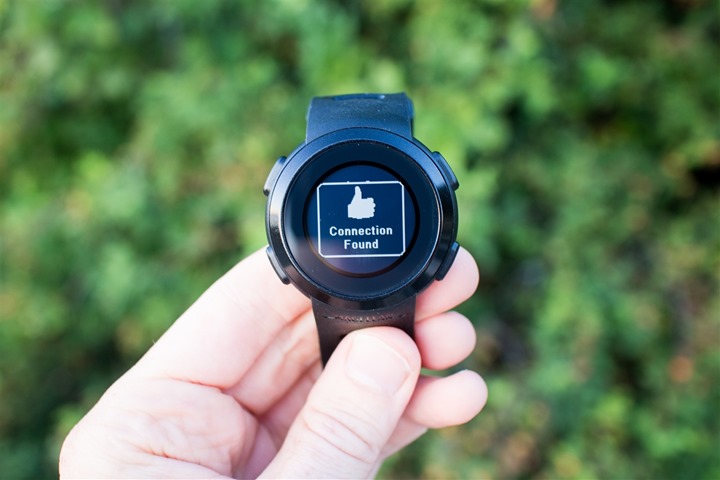 While there are certainly other non-Apple devices that contain Bluetooth 4.0, none of those devices are supported at launch.  The situation on Android and Windows Phone with respect to Bluetooth 4.0 support puts both platforms into the ‘later this year’ category.  Through no fault of Magellan (or Wahoo), but simply due to lack of support on those platforms for utilization of the Bluetooth Smart device profiles.  At conferences from both companies (Google and Microsoft) last month both announced plans for full support later this year.  But we’ve also heard that repeatedly before with long-missed timelines (from Google & Samsung).  So I’ll see it when I believe it.

Back to the Echo though…

Once it connects to your phone it’ll display the data fields you’ve configured (more on that in a minute): 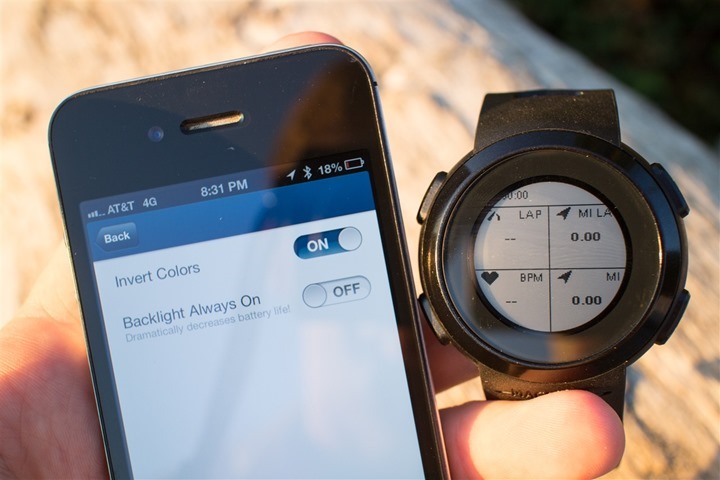 At this point, you’re ready to run.  In my case, I’ve set the upper right button as my start button.  So I’ll simply press it to start running.

Running with the Magellan Echo:

While running, the GPS data is fed from your phone to your watch.  Again, the unit itself doesn’t include GPS within it, it must leverage your phone’s GPS chipset.  That GPS chip will provide speed/pace, distance and then metrics related to that. 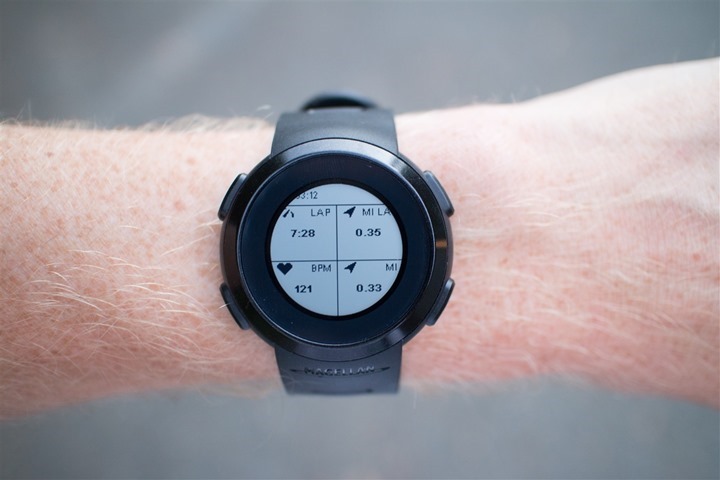 Now, as part of my final review upon launch, I’ll take a closer look at how accurate that GPS data really is compared to traditional GPS running watches with integrated GPS chipsets.  Historically speaking, in my tests GPS accuracy of phones haven’t fared too well.  And given I’m often running with phones testing other things, I haven’t seen great accuracy there either.  But I’ll take a renewed look at things as part of the review’s ‘GPS Accuracy’ section.  So even though it wouldn’t be the Magellan Echo’s fault, it ultimately would impact whether the device is useful or not. 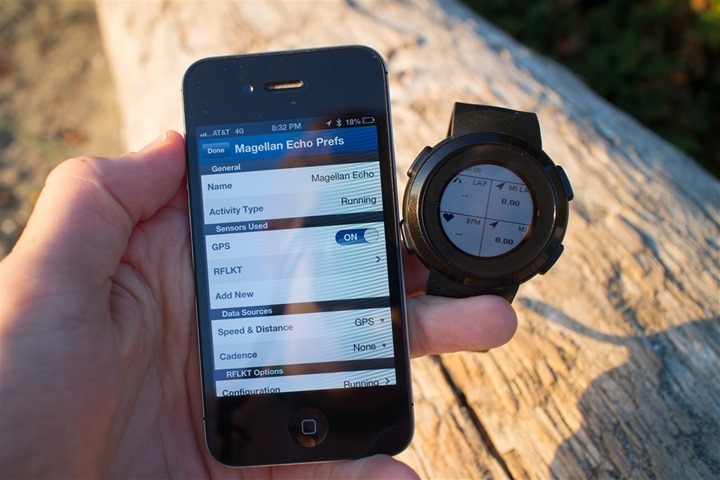 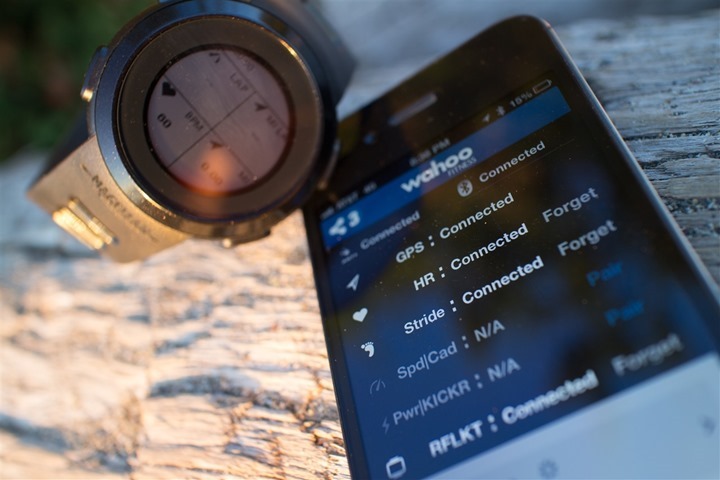 Same goes for the Polar Bluetooth Smart footpod (for indoor running, or running cadence data).  In fact, if you have the Wahoo Fitness ANT+ adapter, you can also feed in any ANT+ data you’d like from ANT+ sensors including power meters, speed/cadence cycling sensors, running footpods and heart rate straps. 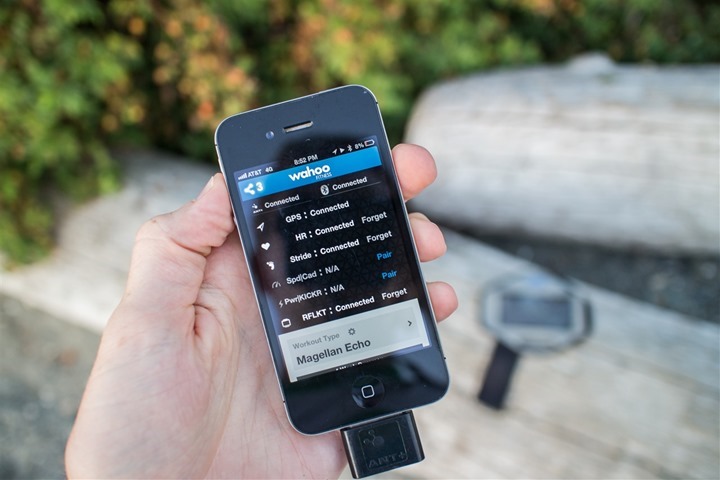 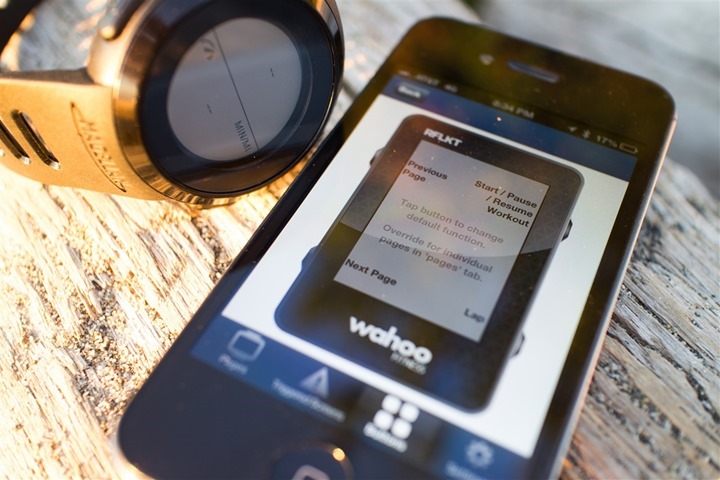 Because I was using the non-beta Wahoo Fitness app for the majority of these screenshots, I wasn’t quite able to show all the different display modes, which are a bit more refined in the Magellan Beta, which I’ll have access to shortly and will update a few of these photos (primarily the ones with the blue/orange watches).  But you can see some of the additional modes from photos I took briefly at the airport. 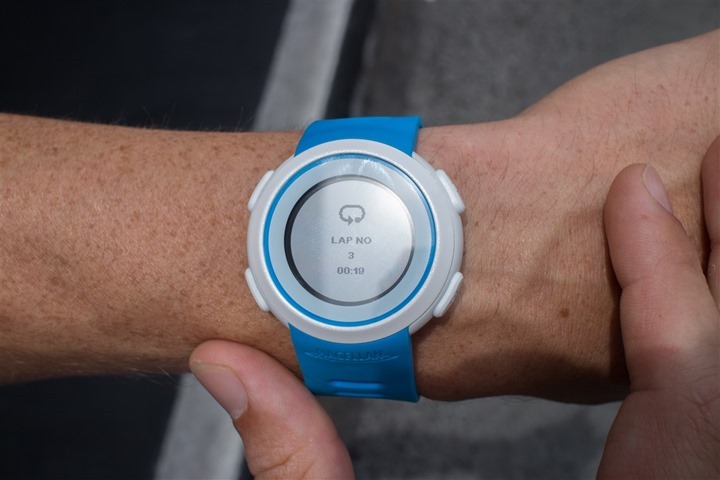 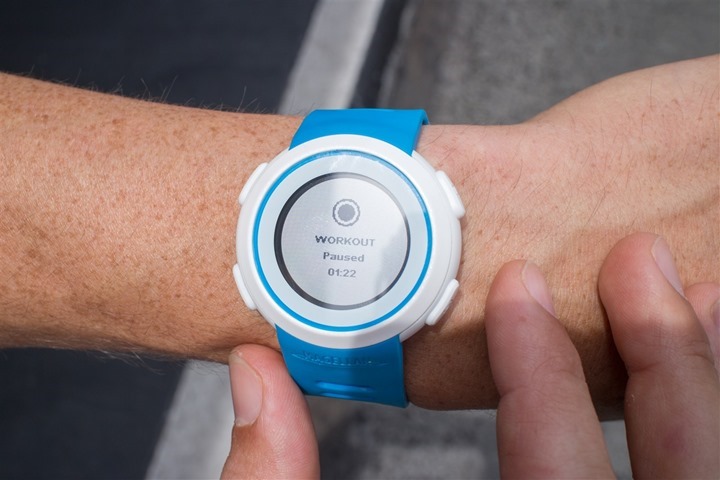 Once you’re done with your run you can upload the data directly to any number of services via the Wahoo Fitness app (and Magellan will leverage the same partners).  Today that includes:

Or you can simply save the files in a number of standard file formats:

The above file formats pretty much cover every sports tracking log or platform on earth – so you’re good there.

Let’s take a closer look at the customization side though, as this is what I believe makes the watch far more appealing than your normal $150 running watch.

Upon release in October, the unit will have its own application as well as certain 3rd party apps that they’re working with already.  Today though I can use the Wahoo Fitness application to customize the Magellan Echo. 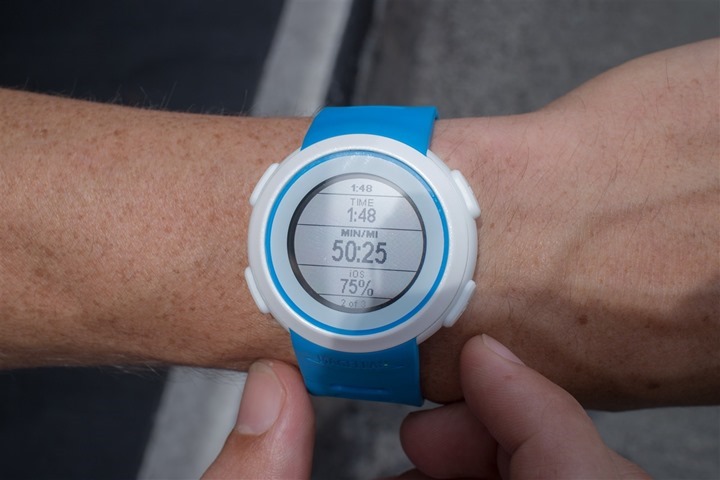 Within the app I’ll first search out and pair to the Magellan Echo.  This is identical to searching out any other Bluetooth Smart or ANT+ accessory, and only takes a second.  Once that’s done, I can create a new profile (or use an existing one).  Each profile has settings associated with it for everything from sensors to display settings and buttons settings.  In my case, I just created one called “Magellan Echo” to keep things simple.  You can see in some of my photos I’ve set the type as ‘Running’. 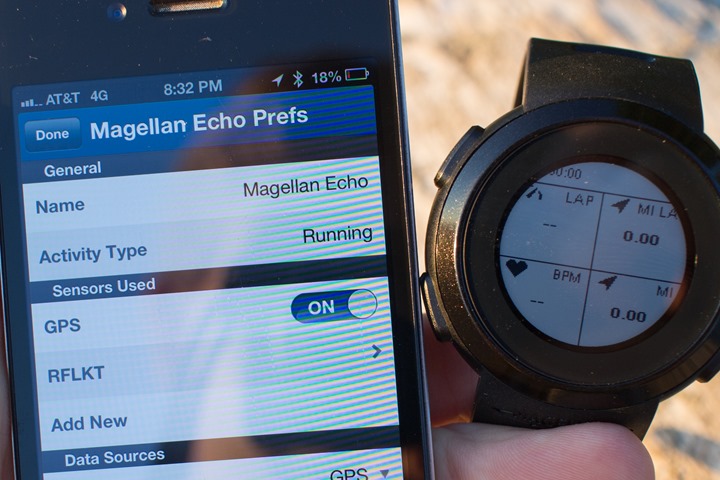 Within that, I’ve gone ahead and configured the data pages as I see fit.  Now right now it’s using the Wahoo RFLKT ‘template’, so things obviously will look different in the final form (as in, the background will be a watch).  But, it still displays the same.  Here’s a few fields I created: 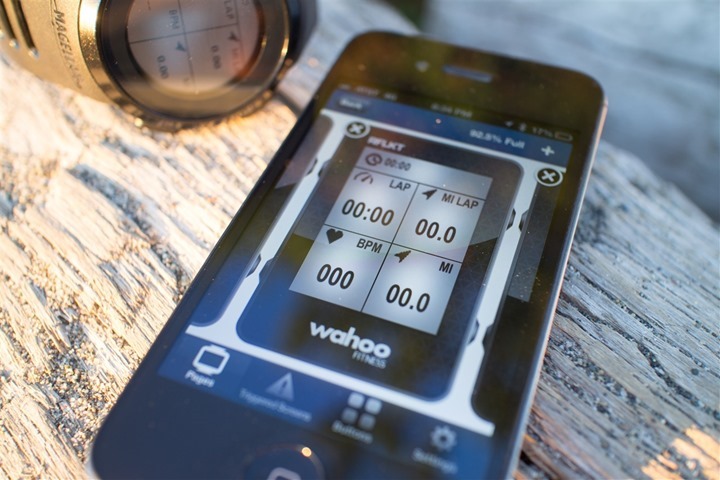 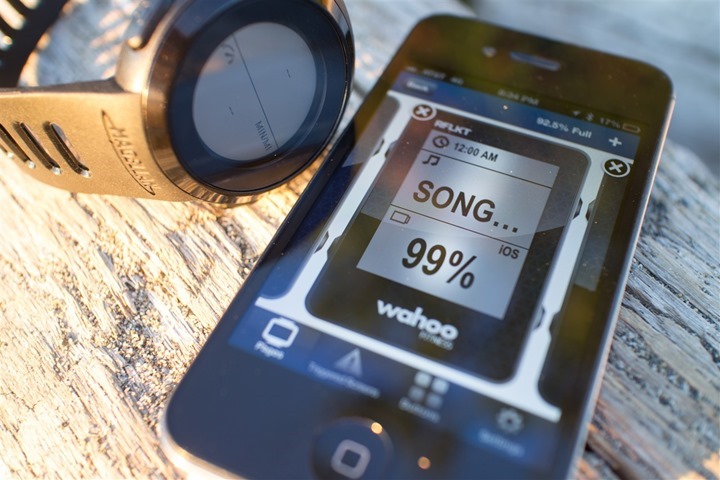 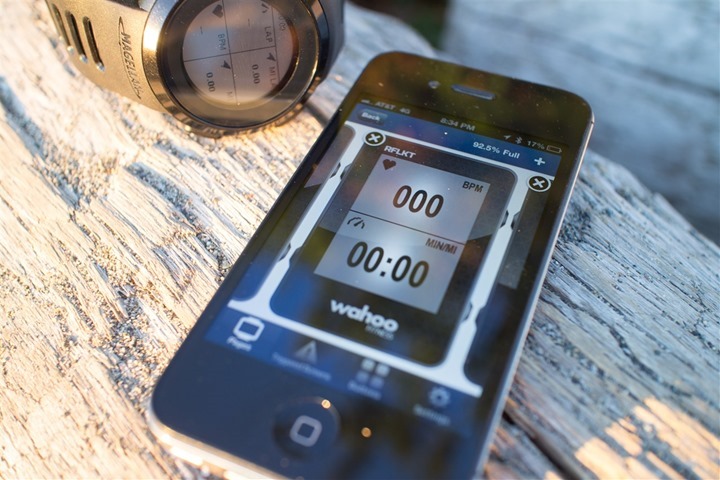 Now what’s cool here is that while above I set everything as running, I can also do the same for any type of workout – including cycling.  This allows me to configure cycling metrics like power meter data, there’s quite a few power meter data fields I can configure today: 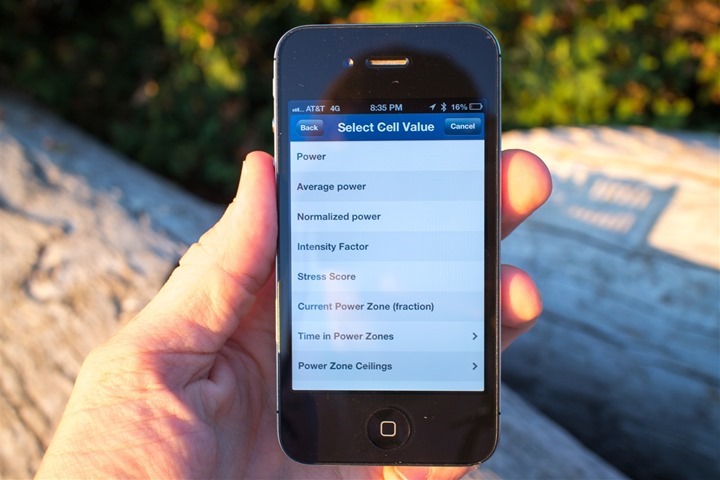 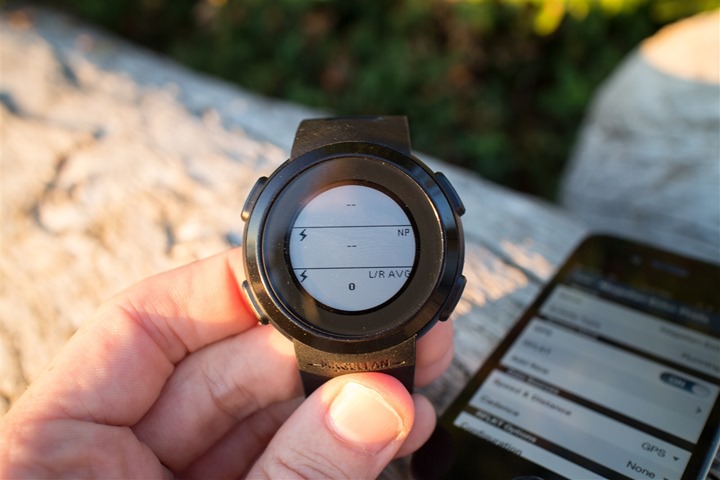 While not everyone wants to see their power meter data on their wrist, it’s actually a request I hear more often than you’d think.  So the potential to do what you’d like is pretty nice.

A pile of specifications and details:

The unit will come in three colors, which are shown below – all color variations are the same price, but there are packages which cost $50 more to get the heart rate strap.  The sample I have is black, so I snapped these shots at the airport – thus I apologize in advance that they aren’t of the highest photographic quality.  Also, the orange-looking band you see below is a non-final color, it’s a bit more reddish in the final color (like you see in the computer generated imagery down below). 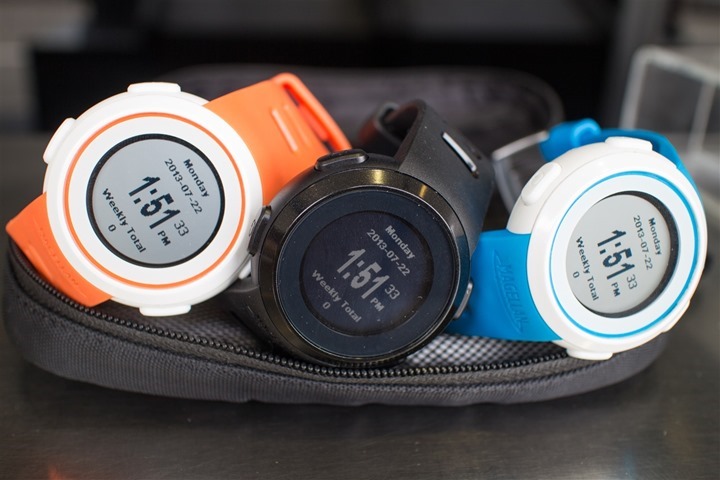 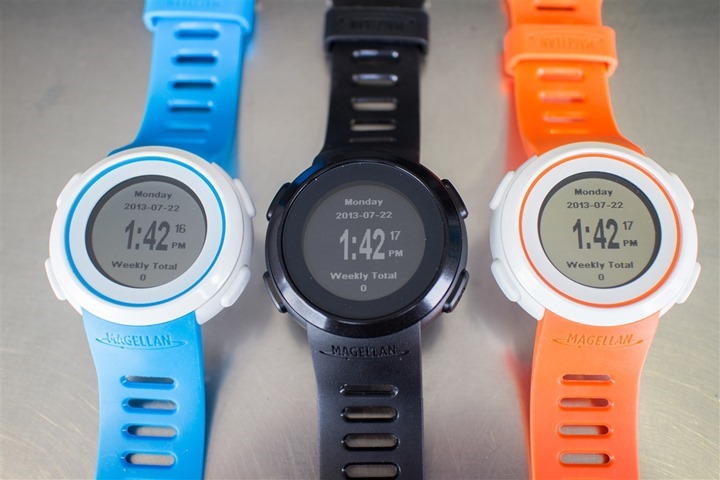 Because this isn’t a review (no really, it’s not, it’s just a first glance), I won’t be talking through every aspect and specification as I normally would in separated sections.  Instead, I’ve included below some key specs they’ve included in the information they gave to me, as well as additional items I asked about.

Initial Thoughts after Half a Day: 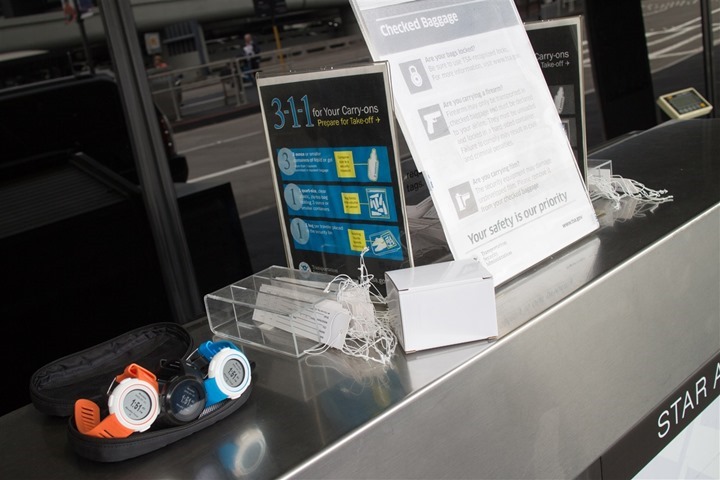 I’ll admit, when I first heard of the device, I was somewhat lukewarm on it.  But after playing with it a bit, I’m starting to see some of the potential here.  While I saw the potential with the Wahoo RFLKT cycling computer, I feel like the Magellan Echo has a bit more of a polished physical design to it.  It’s incredibly light.  Easily the lightest running watch I’ve ever used.  Like a small pile of Pringles chips.  And as such, it makes it more appealing to use since it feels and looks like any other running watch.

It’s clear that over the last few months Wahoo has worked with Magellan and has been adding in all of the required running-related fields to setup the stage for the Magellan Echo watch.  And in customizing my data fields, I’ve been able to very easily replicate the exact setup I typically use on the $400 Garmin FR610 that I normally run with. 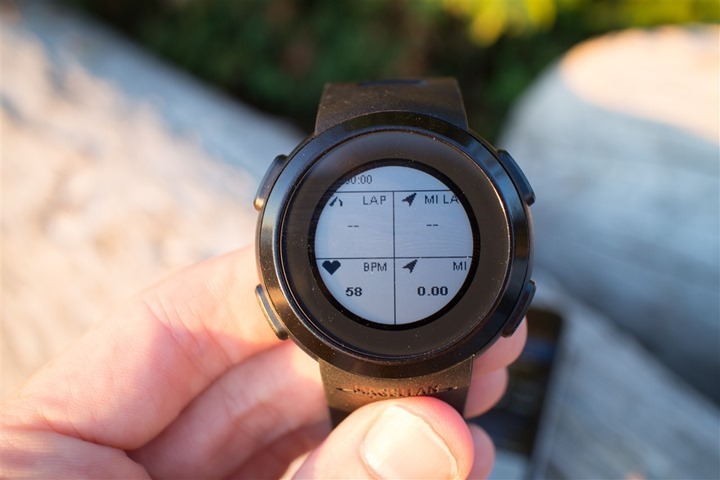 Now obviously the Echo requires a phone on your person while running.  That makes it less ideal for things like triathlons where quick transitions are of importance – and phone legality is questionable.  And since the device lacks full swim-proof waterproofing, you wouldn’t want to take it on the swim leg.  But, on the flip side, it can be used to show cycling statistics – including power meter information.

I’m pretty interested to see where things go from here.  Magellan has signed on a few core 3rd party apps for launch, but those names aren’t yet released.  The key will be getting those apps actually publicly available at product availability.  Wahoo had touted the same for the Wahoo RFLKT, but those apps really failed to materialize at launch, and have largely lagged in 3rd party interest since.  The good news though is that now if app developers add in support for the Magellan Echo, it’ll work with the Wahoo RFLKT as well.  A bit of a twofer.  I expect that’ll stimulate more apps to join in.  Or at least, I hope so.

Please Note: Again, this is not a review.  It’s an early look at a pre-release product – a product some three months away.  Obviously, at this stage in development (as with any product), there are bugs.  ‘Known issues’ as it’s called in the industry.  Ones they expect to be removed by release.  But at the same time, it’s possible (though seemingly unlikely) they won’t be addressed.  I say that because I want to make it clear that since this isn’t a review I can’t state whether or not the final device is reliable and reasonably bug-free.  It could be both, or it could be neither. I’ve only had the device for 13 hours, 16 minutes and 20 seconds.  Thus, again, I haven’t dug into what works and what doesn’t.  Make sense?  Good.  Enjoy!

As always, feel free to drop any questions below and I’ll do my best to get them answered.