A flooded run and some brotherly love with new incoming gear

I arrived back from my US work trip into Paris on Friday evening.  This would give me just about 15 hours until my brother landed here, following me across the pond.  The two of us will be spending the next week down in the Alps starting Monday night.

But before we head out skiing, there was some sightseeing to do, along with a run (and a longer run on Monday).  He’s been to Paris a few times and has seen most of the major sights, so much of our time was just wandering around around the city from café to café.  While we can see the river from our house, the section in front of us is somewhat prone to flooding high enough such that boats can’t go through.  But the wider section of the river on the other side of the island takes a wee bit more water before the boats can’t go up it (halting all movement on the Seine through Paris).

As we headed out, we got a look at just how high the river was (well, still is, and getting higher): 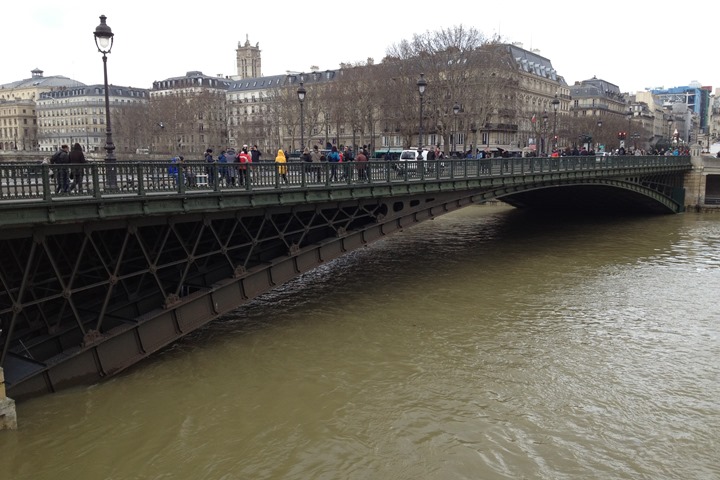 Later that day, this would have an impact on my run.  I typically start out along the river bank and stay there for the first mile, since it’s essentially free of crossings and other breakpoints. 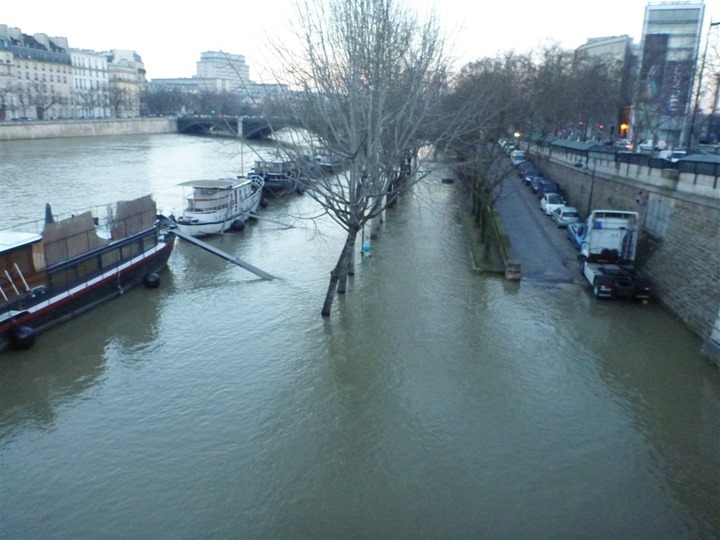 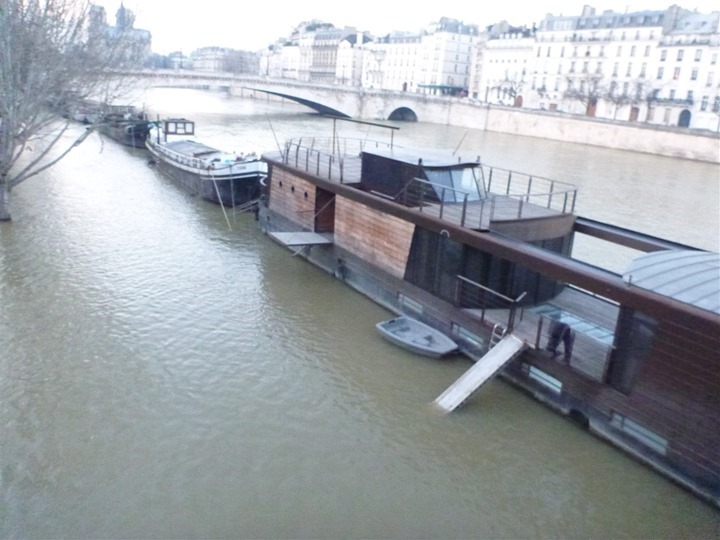 After about a 1/3rd of a mile though, I was able to drop down into a park section which wasn’t flooded yet.  In doing so I got to see some of the ingenuity used by owners to still access their boats. 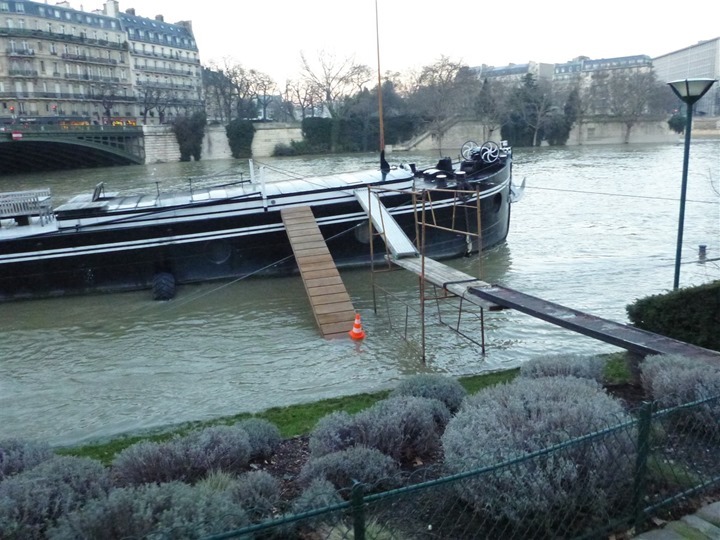 Once in the park you can see the water fully covering the half-circles to the left.  This is actually where folks do dancing lessons in the warmer months every night.  Check out this post to see pictures of this exact spot from the summer, just to get an idea of how high up the water is. 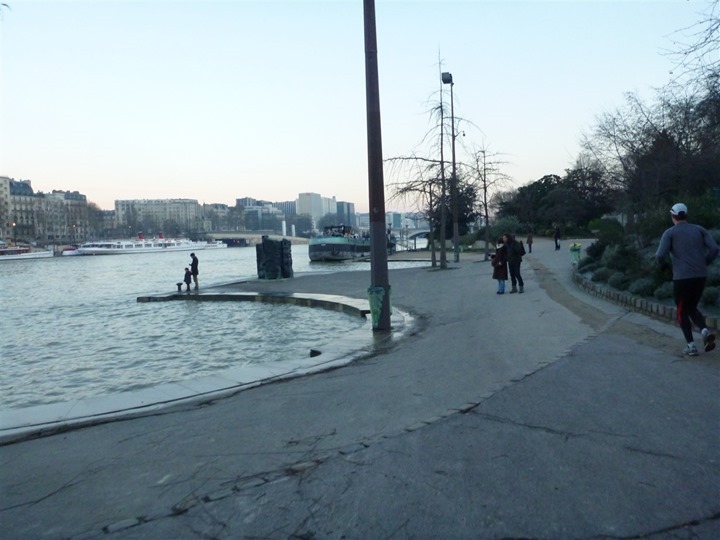 At the end of the park I completed a bit of a loop to burn more time before my next section of the workout.  The workout was structured as such:

The intensities all have zones attached to them (heart rate).  But roughly mid-high would be 10K race pace, and high would be 5K intensity.  Depending on the week the number of total sets would be higher or lower.  Since I just got off a 9-hour time change and a travel week, that was also an easy week, it was just 1xSet.  Each set takes 15 minutes, and there would normally be a 2m 30s break in between the build and the sets, and the sets and the cool-down (as well as between repeated sets).

Normally, I do this particular workout inside the Jardin des Plates (Garden of Plants, which is adjacent to the zoo), but at this time of the day they were clearing folks out, so I was out of luck there.  I prefer doing it inside there since it’s perfectly flat so my pace can be repeatably measured and analyzed week after week.  Versus if I had done it somewhere with more rolling hills or lights/stopsigns then I wouldn’t be able to compare week over week. 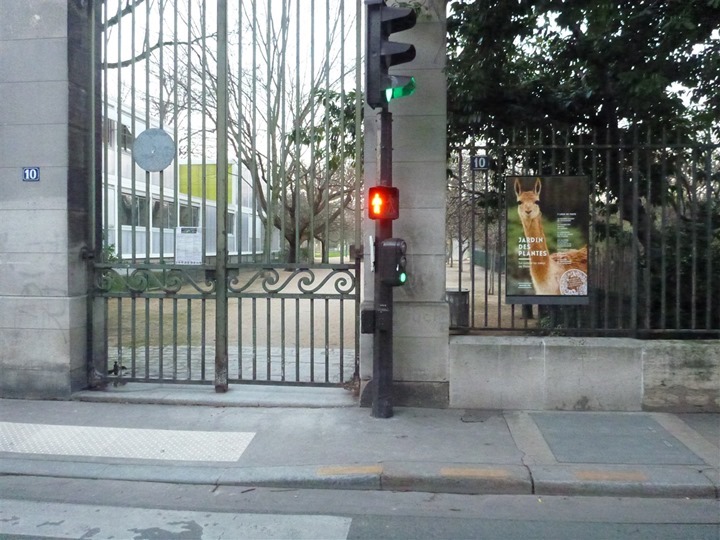 With that out of contention I ended up just doing a giant loop around the perimeter.  The only problem being it has a small hill up/down on it.  But, I wasn’t super worried given it was a recovery week with wonky travel.  So things were already going to be potentially weird.

With that I finished up the set back along the river and eventually back on the island.  I usually do my sprints on the backside of the island because it’s quiet and relatively traffic free.  I took the below picture after finishing my last 30” sprint.  Note the light poles in the water.  Nice to see them apparently waterproofed. 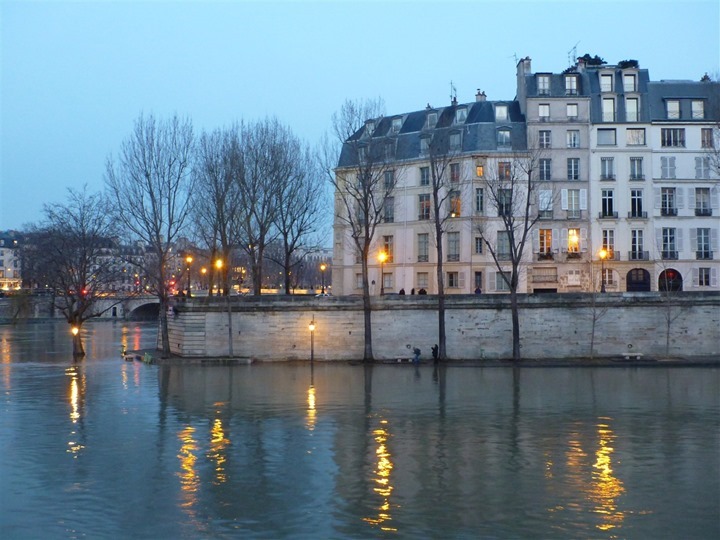 Roughly in front of the house is this boat.  It’s a bit of a nightclub at times, usually pumping out music until 4:15AM on weekends.  This weekend, not so much.  Somewhat ironic that its name ends in the ‘Flotta’. 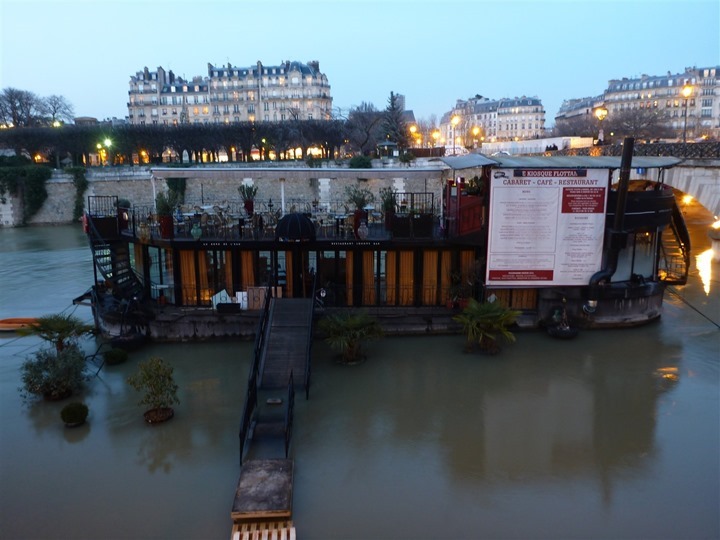 Looking at other random things from the weekend.  A new Elite Trainer (well, technically rollers) unit came in, the Arion Digital Roller.  I’ve been talking with them for a few months about getting units in.  Space has been my primary issue.  But with the CycleOps Virtual Trainer software review done, I’m only backlogged now on the Tacx Genius review.  Well, that and the KICKR, but that won’t happen until later this month as 3rd party apps become more widely available.

We decided to go with the rollers first.  These are unique though in that they’re actually ANT+ enabled.  The unit actually transmits your power and speed, and allows digital resistance control.  Sorta like the mother of all rollers.  I’ll look at their other trainer units as we approach next fall.

They came into the (cupcake) shop on Thursday.  I have companies ship most trainers and larger items to the CupCakery, since there’s always someone there – and we have a good relationship with the various couriers there. 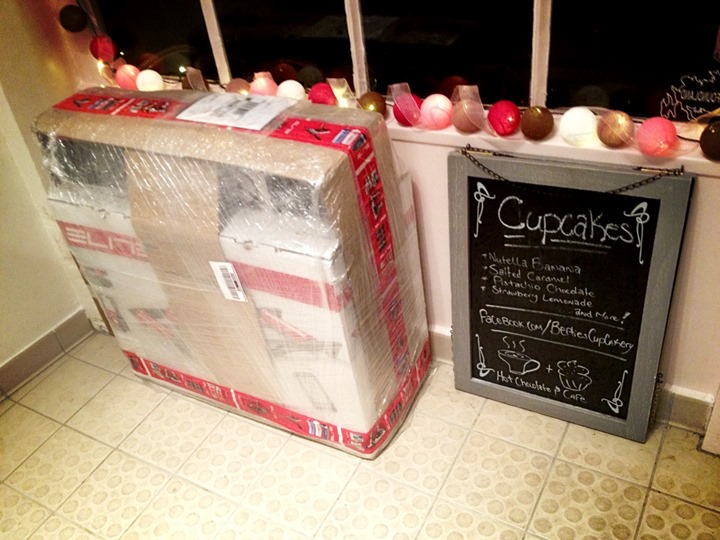 Of course, this does mean walking it home myself, which while not terribly far (probably about 1/4th of a mile) can be a bit awkward with such a box.

Thankfully, my ‘little’ brother had arrived a couple hours earlier off his redeye.  Seemed like the perfect job for him.  I meanwhile held the cupcakes as our treat afterwards. 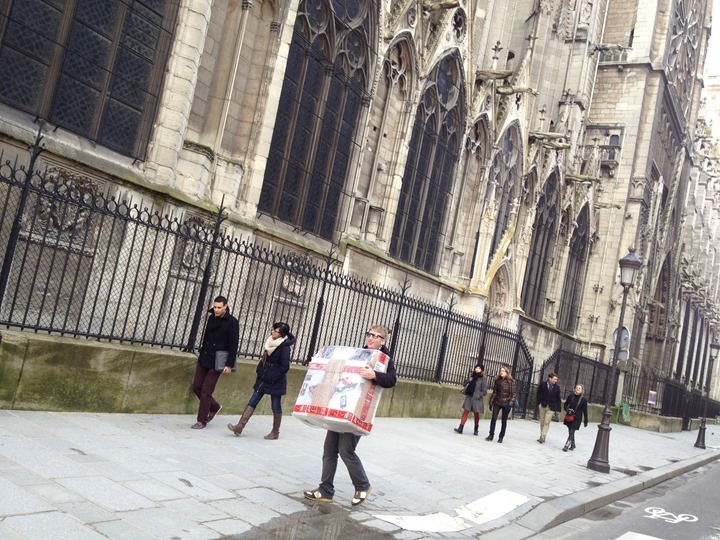 You’ll notice above (and below) that things look somewhat sunny.  And indeed, for a brief few hours on Saturday they actually were.  I’ve come to learn that sun is a rare thing here in Paris. 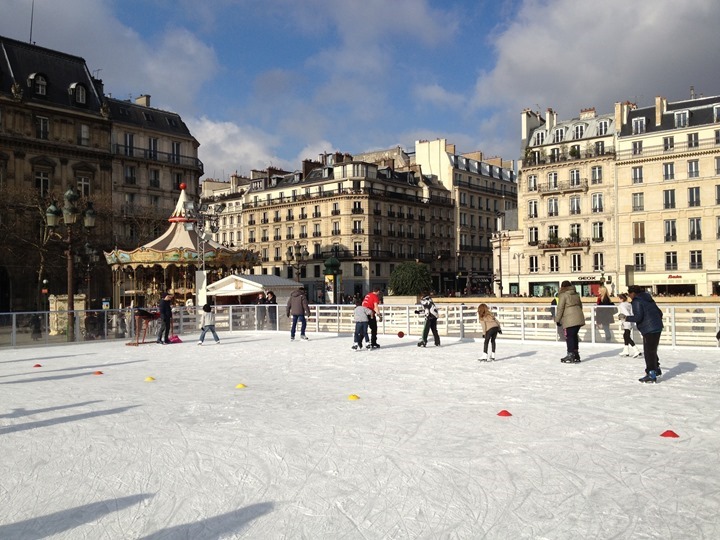 But don’t worry, the Parisian weather quickly takes care of any sun.  By that time on Sunday, we were back to snow.  Err…slush. 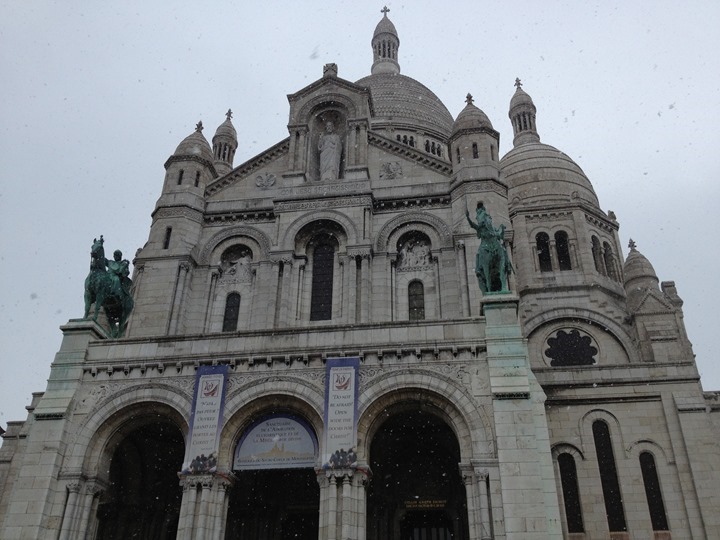 The snow never really stuck, instead, it just made it generally unpleasant outside when combined with the wind. 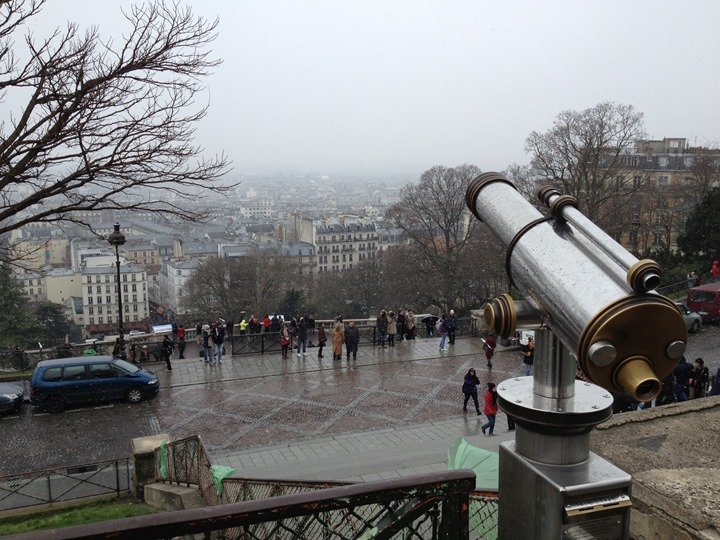 Of course, snow is however exactly what we want up in the mountains.  But we’ll get into that later in the week.  Tomorrow morning after knocking out my 2hr and 30m run, we’ll get on a high speed train and head down to enjoy some skiing in the Alps.  And thankfully the skis made it off the plane just fine.  Albeit the very last bag to come off.  Probably a bit of payback for me arriving a wee bit late Thursday night to check-in for my flight. 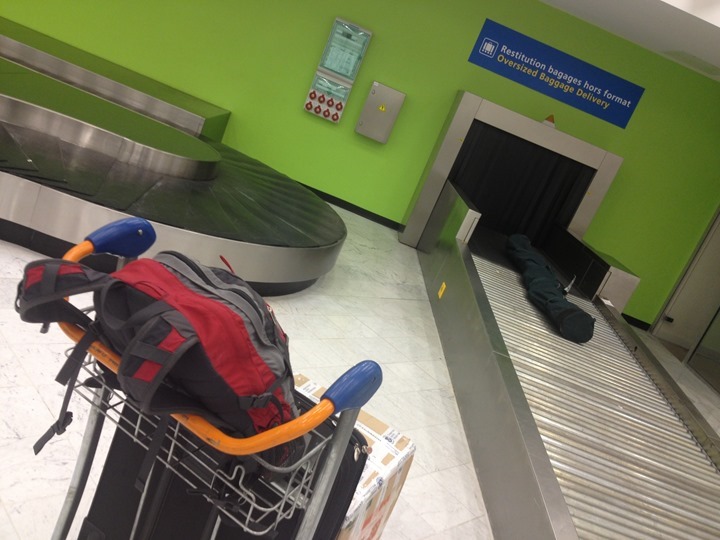 With that, hope everyone has a great week ahead! And thanks for reading!