The fun side of Eurobike: Day 2 in photos

Let’s get away from the sports tech and just talk about some of the more entertaining/interesting/strange things we saw at Eurobike.  You can rewind to Part 1 for our first day.

For example, while bicycling with your dog on your bike in the US may get you strange looks, I can assure you – it’s completely normal here in Paris and elsewhere in Europe.  Dogs take to bike baskets just like dogs do to car windows.  This basket features a dog cage to keep your fuzzy little friend in: 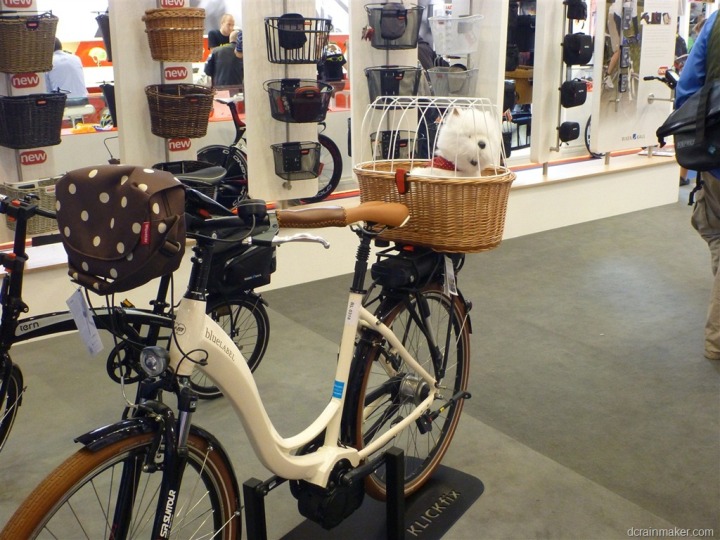 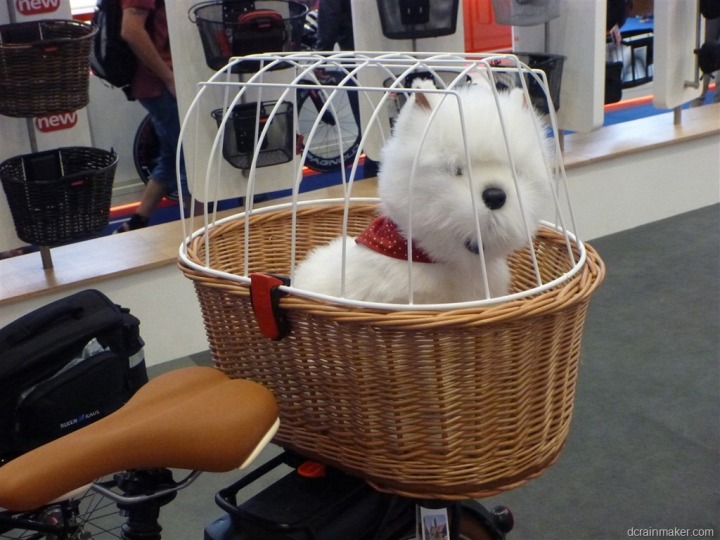 The assortment of odd things you can attach to your bike is deep and far reaching here.  This water bottle straw system is designed to ensure you’ll quickly learn how to take your hands off your handlebars to grab your water bottle instead. 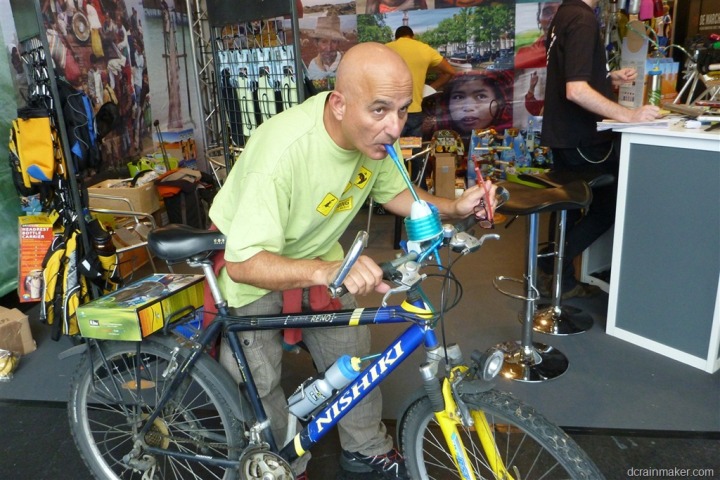 One of the coolest demos I saw out on the show floor was actually a clear wheel that shows the gel sealant inside it rolling around.  Kinda crazy. 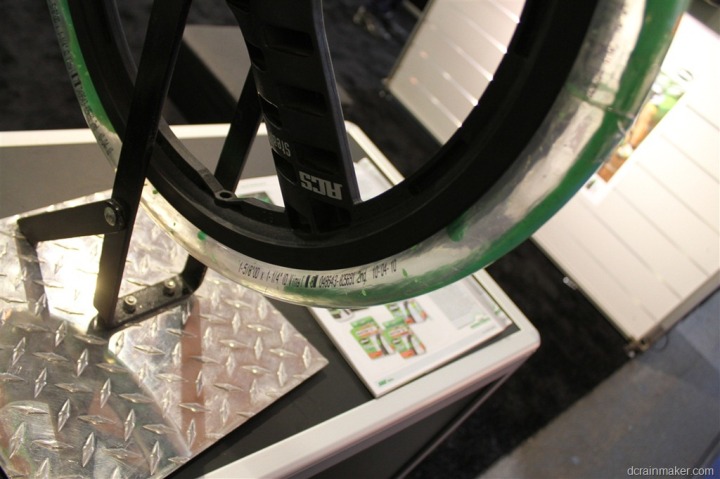 Speaking of demos – this poor girl had to stand there all day long in a puddle of water, demonstrating their waterproof socks. 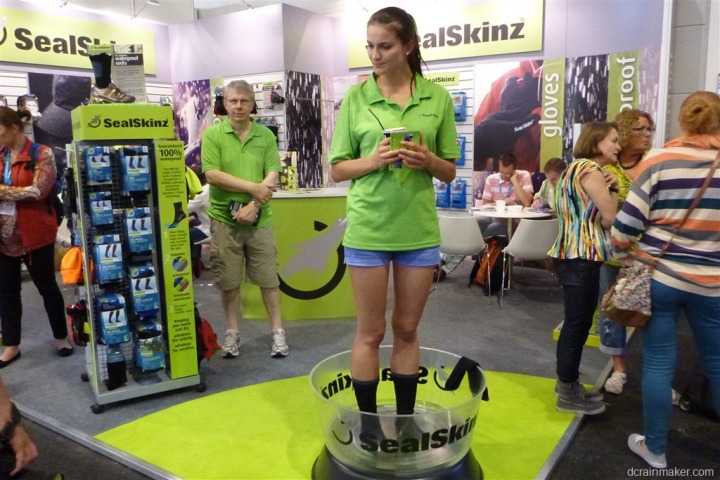 However, other models simply decided that clothing wasn’t necessary at all. The below cell photo was ‘gifted’ to me by an industry member that read my previous post about both The Girl and I missing the photo op, so they sent this along as proof of some of the Eurobike booths. 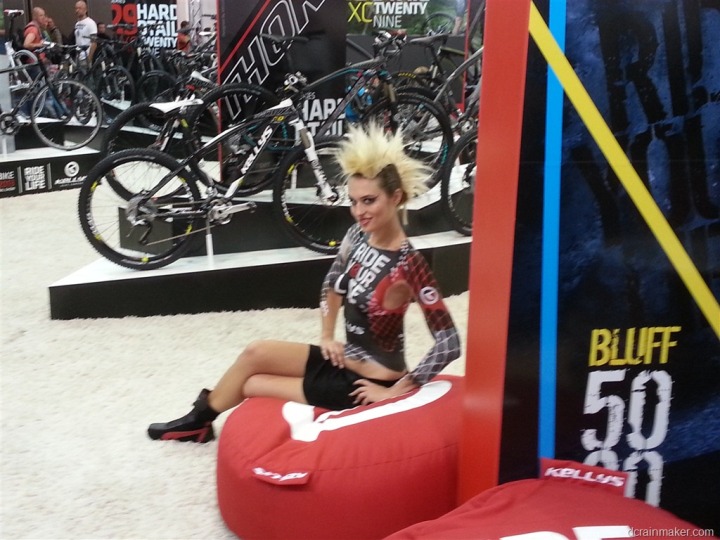 Since we’re well on the way towards questionable – I give you the following imagery to ponder.  Just to clarify, he’s holding a bike seat.  She’s holding him.  And there’s some text there that’s well worth reading. 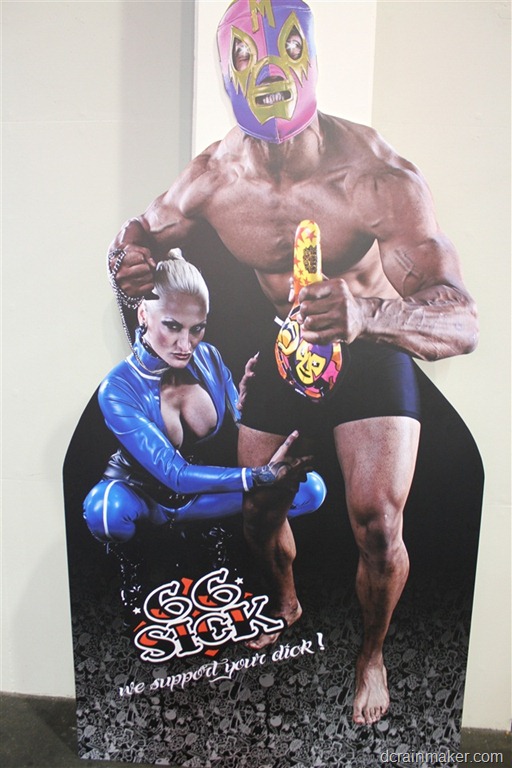 Then we have this booth: 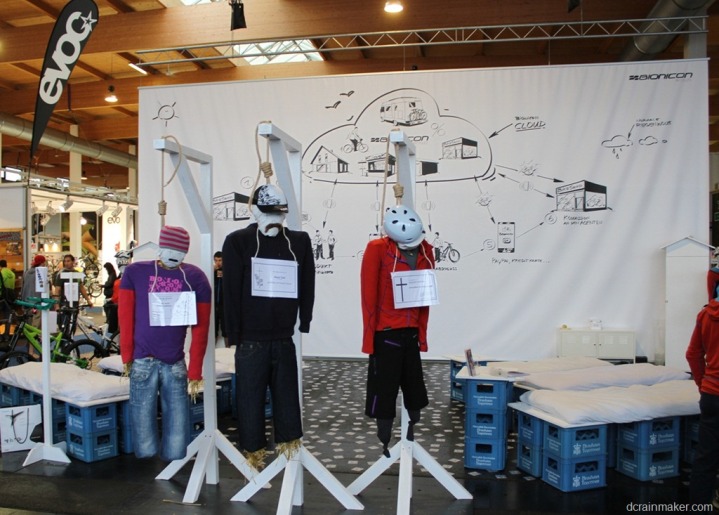 I passed by it back and forth a number of times, as it was on the main drag that goes past all the halls – so virtually everyone at the show probably saw it, even if they didn’t do much hall wandering.

I decided to stop and ask on the second day what the deal was.  The people being hung are supposed to represent local bike shops that were killed off by online retailers.  Each one of those people represents a specific example company, which was killed off by a specific online company.

The irony was that as he outlined this for me, he then went onto explaining how they themselves were doing online retailing.  Nonetheless – even if their message was correct, delivery was probably a bit beyond reasonable.  I would point out that their booth was empty much of the time… 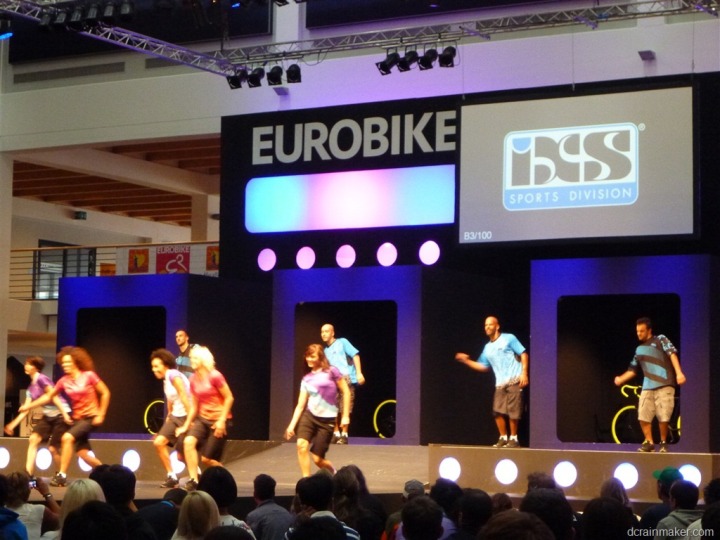 This is better seen in video form though, so just watch it and bask in the glory of people dancing around in Lycra:

Being in Europe, you obviously get many brands you’ve never heard of in the US.  And, you get to see brands that you never knew made something different from what you recognized them for.  Take for example Peugeot.  I previously knew them as a European car company (in fact, our rental car was made by Peugeot).  Turns out – they make bikes! 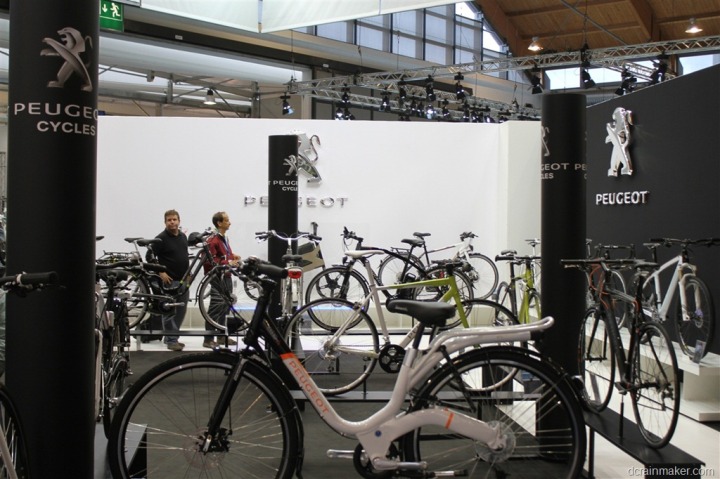 I noticed the below bike bag/box – but I’m honestly not sure about the logic behind it.  Typically folks by bike soft-shell bags in place of bike boxes to save money on airline baggage costs.  And while a part hard-shell part soft-shell case might be appealing, it doesn’t really address the major issue of soft-shell bike bags – which is damage to the bikes.  So in this case, you lose the airline ‘it’s not a big’ factor, while also loosing the protection of a hard shell case. 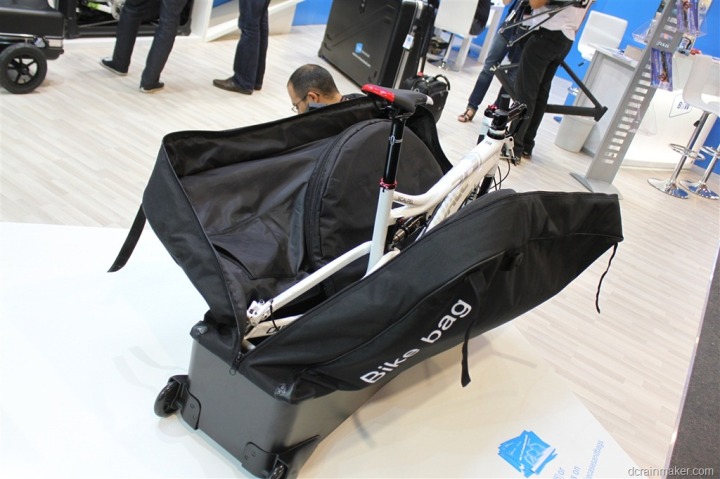 Finally – I got to see two whole mountain bikers out on the course.  Unfortunately, the rain continued on Friday as well, and the tracks were largely empty.  But at the end of the day just as I was headed out two guys did a few loops around the outer edge.  Rumor was it was much better on Wednesday/Saturday – but of course, I wasn’t there for those days… 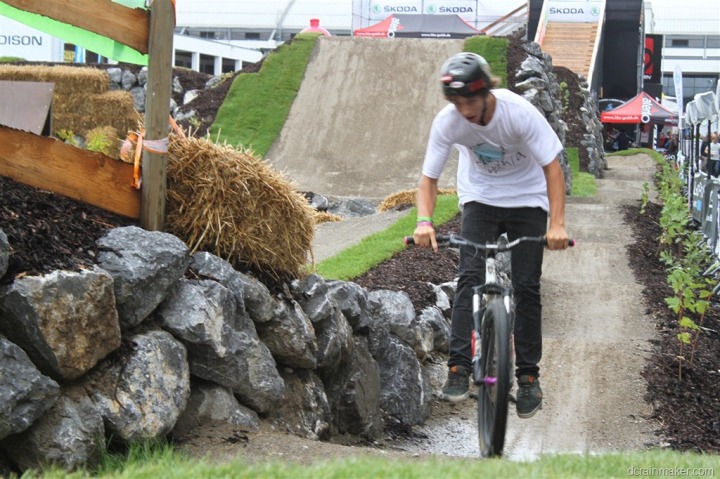 With that, it was time to board our little boat home.  Each day we took a 48 minute ferry ride to/from the show, as we stayed across the lake. 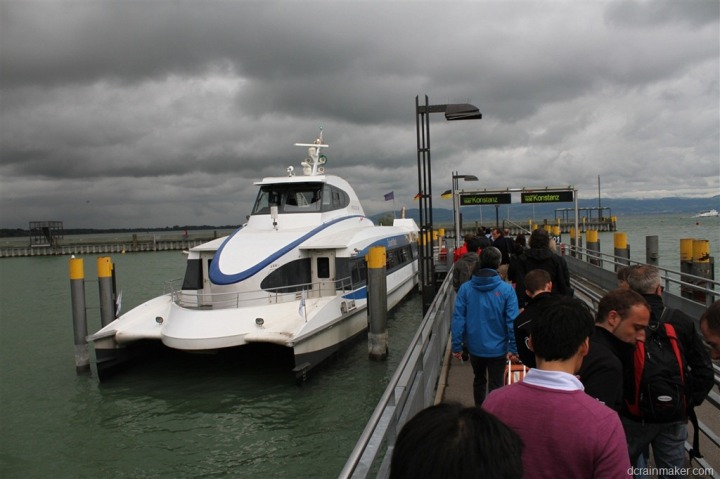 The catamaran boat actually turned out good though.  They had tables with power outlets, so I was able to usually knock out a post or so per leg.  They also had internet, but that was completely nonfunctional most of the time – so I just waited until we got back on land before bee lining it to the McDonalds (fastest Interwebs in town!).  They also had flavors of McFlurries we’d never seen before… 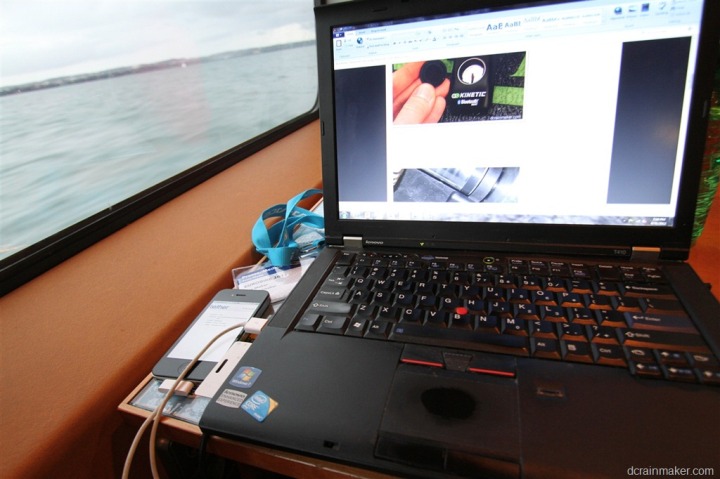 With that, that wraps up my Eurobike coverage.  I’ll be doing a bit of a ‘Timeline reality check’ post after Interbike in two weeks (like I did last year), to give you a feel for what I see the realistic timelines are for all these products that companies have announced.  But I’ll do that once I cover all the goodness being announced at Interbike as well (because there’s definitely some goodness coming up there!).