(Note: This post is written by The Girl…aka…my wife.)

While the first day of the Tour is exciting in and of itself from a cycling standpoint, we were also both pretty excited about the famed parade that tours a few hours ahead of the riders along the entire route (every day of the stage, through every town on the route). The parade consists of large and creative hilarious floats from all of the sponsors.  And while brand recognition may be important to some, we were here for the free swag…lots of it.

Since the parade (known here as the Caravan) is such a big part of the Tour de France, we decided it could not be over looked in our short coverage of the event.  And it seemed fitting for a 4th of July post for all those in the US celebrating independence day. 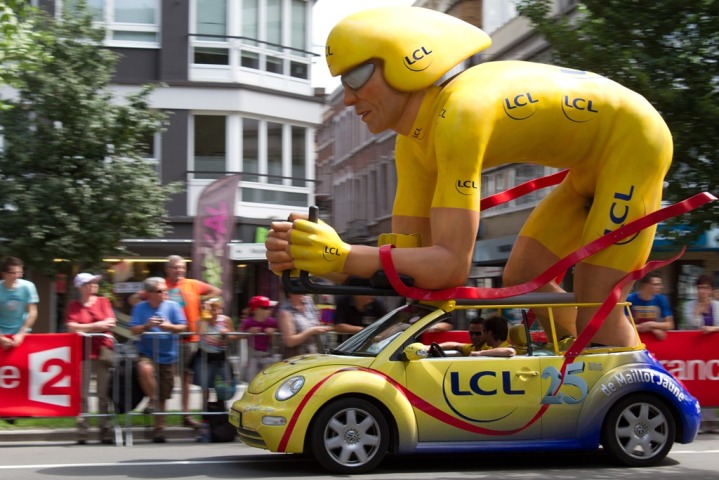 The first and most notable float was of course the yellow jersey leading the charge!

Not far behind the jersey was the trusty teddy bear/lion we see in all of the award ceremonies after each stage. 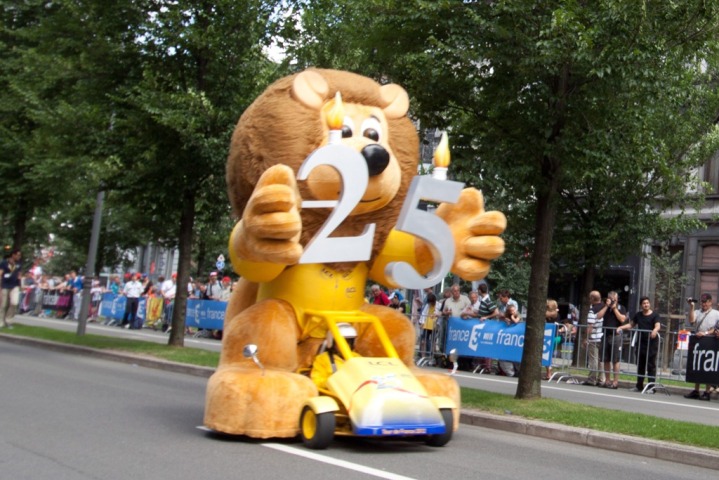 Once these two major sponsors passed us by, it was no holding back on what the other sponsors came up with to catch the attention of the crowds! 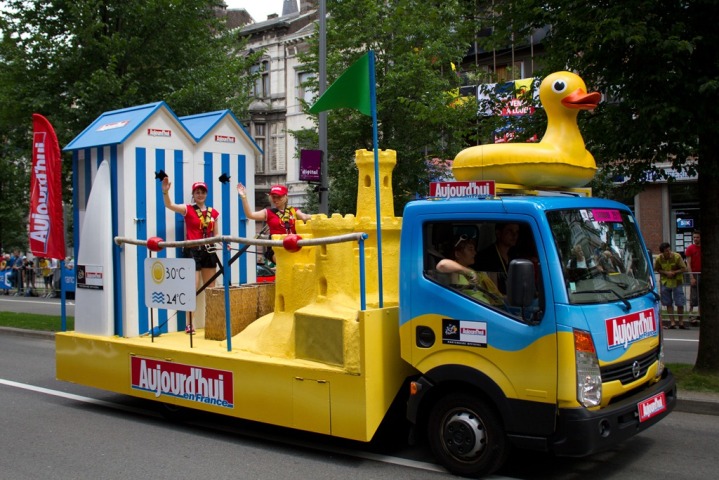 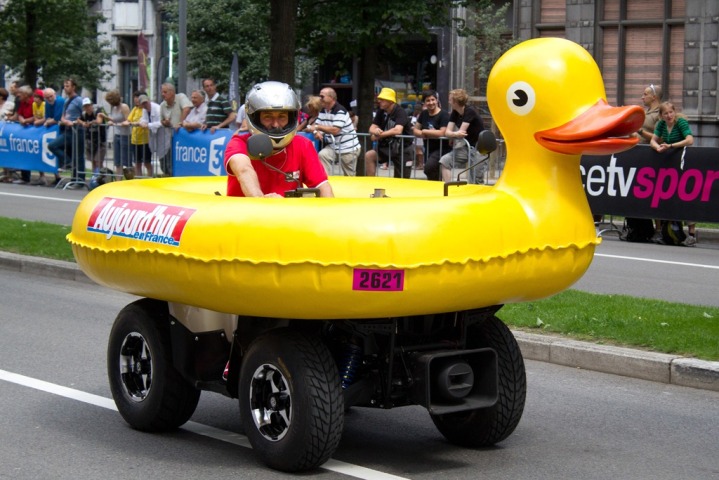 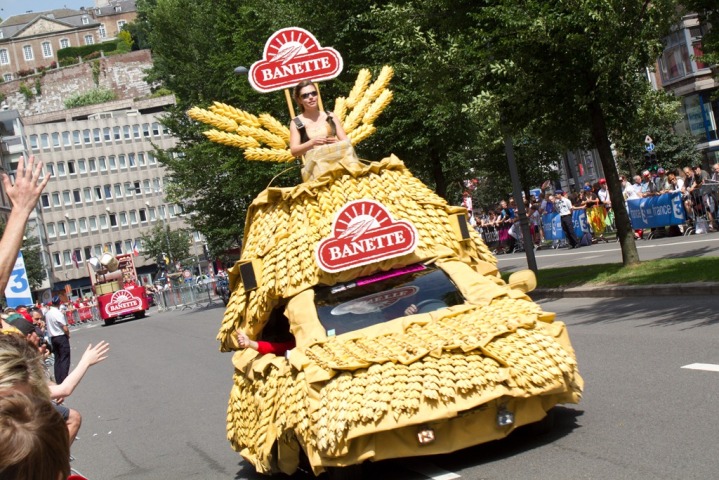 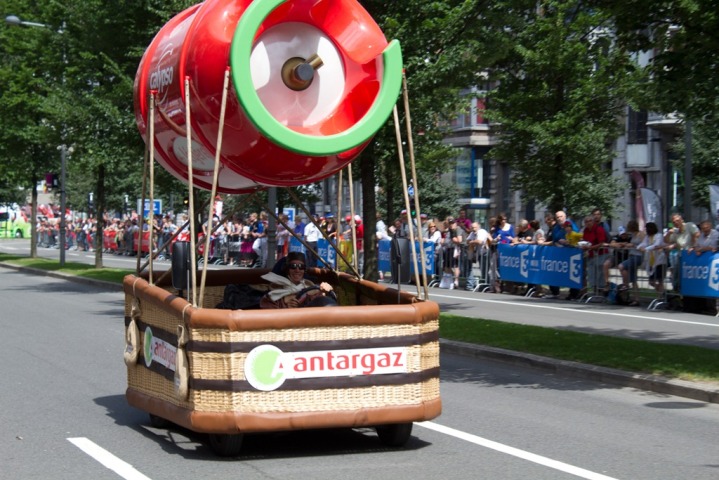 Yes folks, that’s the Haribo truck…the same folks that make those little gummy bears.  We also found out that they make gummy alligators, amongst all sorts of other creatures. 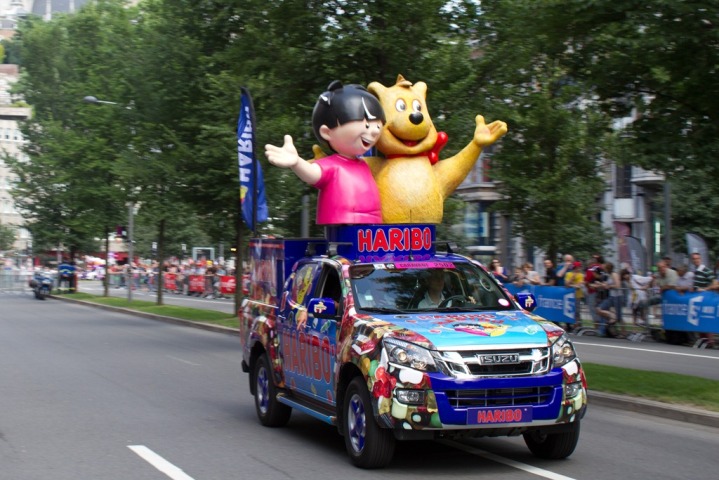 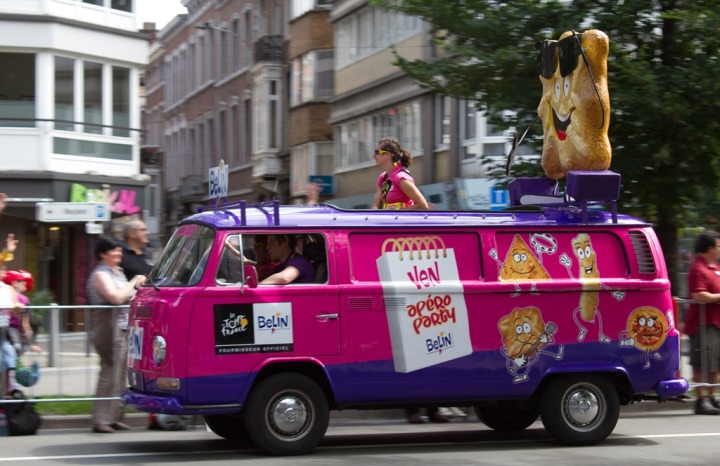 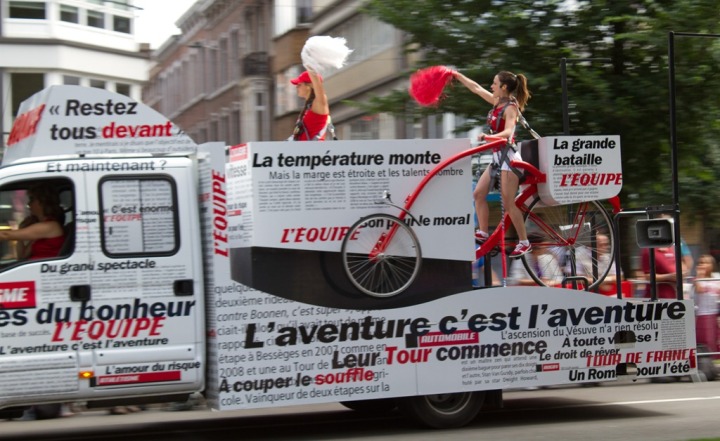 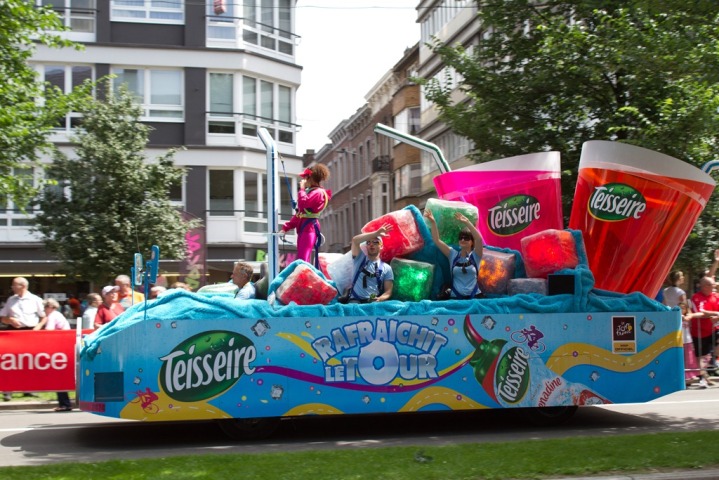 With all of the excitement of the floats cruising by, it was easy to forget to duck for cover! I am not sure if any of the float operators have ever stood in the crowd before themselves, but in some cases they totally underestimated their own strength coupled with the moving speed of the floats (which go by at upwards of 20+MPH)!

The velocity in which a pack of pens, jelly beans, key chains, etc could wiz by your head was astounding.  Luckily we took to this parade in a team effort, with one of us shooting pictures and the other shouting “duck” warnings and scavenging for precious swag!

Speaking of swag, let’s get down to business.

For as long as I can remember, the King of the Mountain jersey has been my absolute favorite! Coupled wit many long hours on the trainer watching live coverage of the Tour and listening to Bob Roll, I have always been jealous of the fans along the course wearing the polka-dotted hats. This year, my goal was to get my King of the Mountain hat!

But before the hat, would come a nonstop stream of other items to chase down.  For example, who couldn’t use a few more pens? (This was one item we didn’t want to get an eyeful of!). 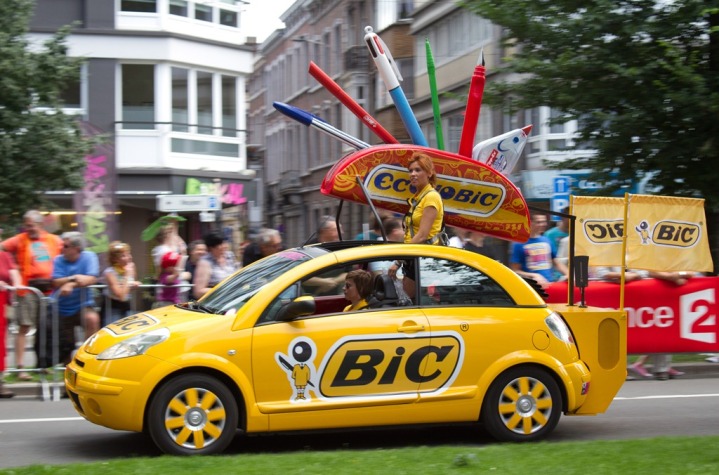 Some pen’s, such as BIC’s, were in little non-eye-poking containers, but others were left hanging in the wind. 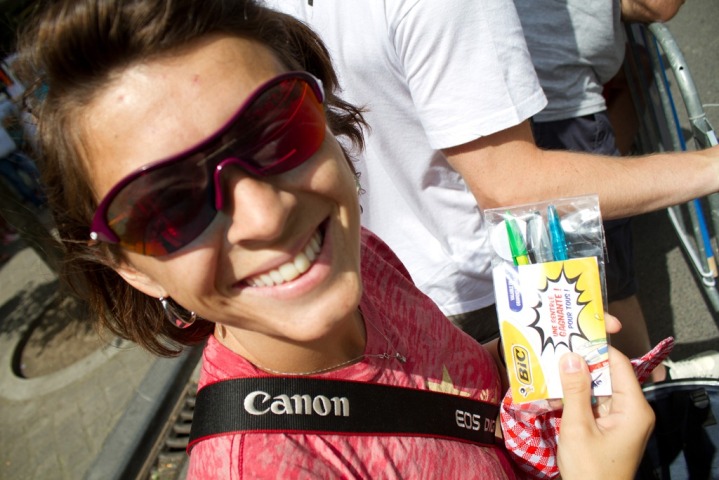 Then there was the floppy hat from the sausage folks.  Anytime you involve sausage, things are bound to be great. 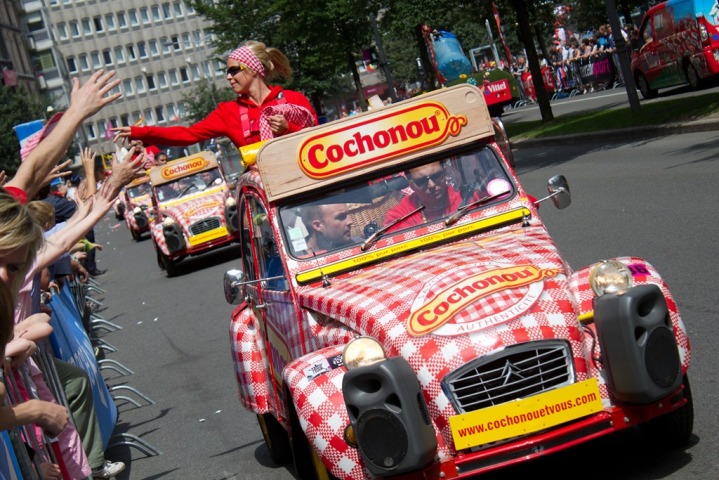 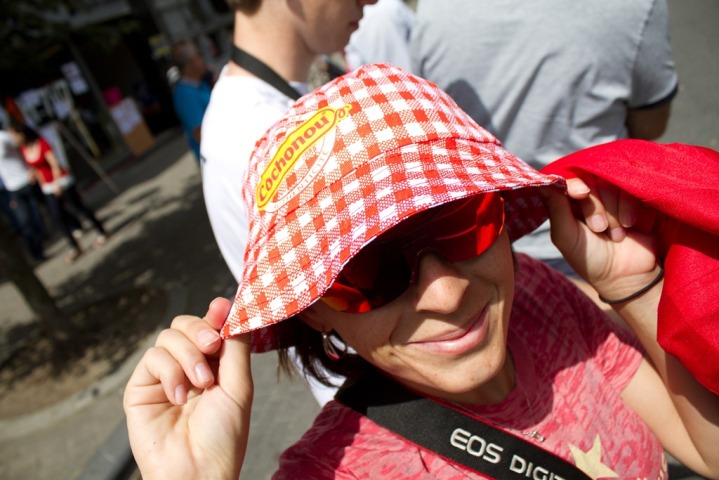 While Saturday wasn’t a particularly hot day, there were a number of passes of vehicles with free water bottles.  I suppose that spectators dropping like flies doesn’t look good on TV, so best to keep everyone hydrated. 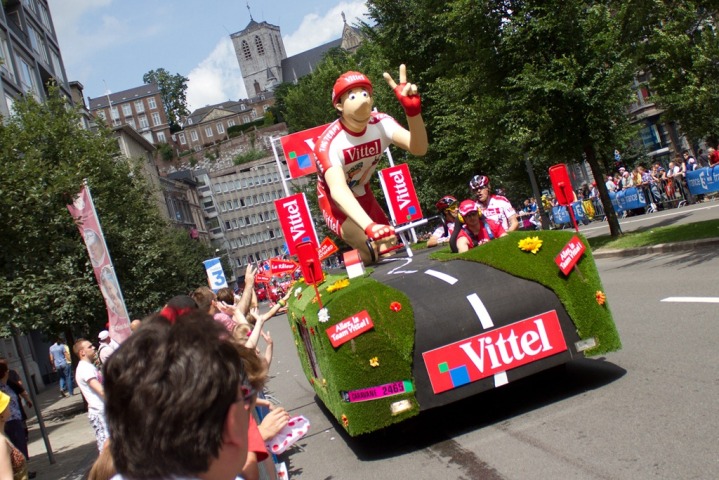 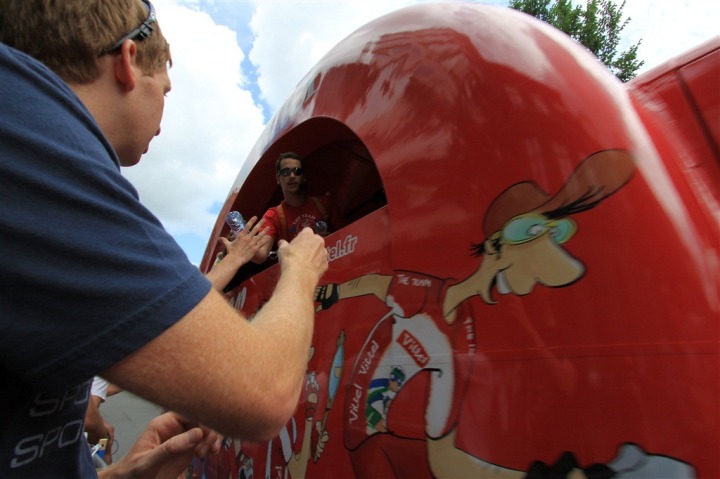 Then there was crazy cycling lady.  We have a video of her.  She was atop a trainer of sorts, and then pulled along by a motorcycle.  Nonetheless, she sounded very…uhh…involved. 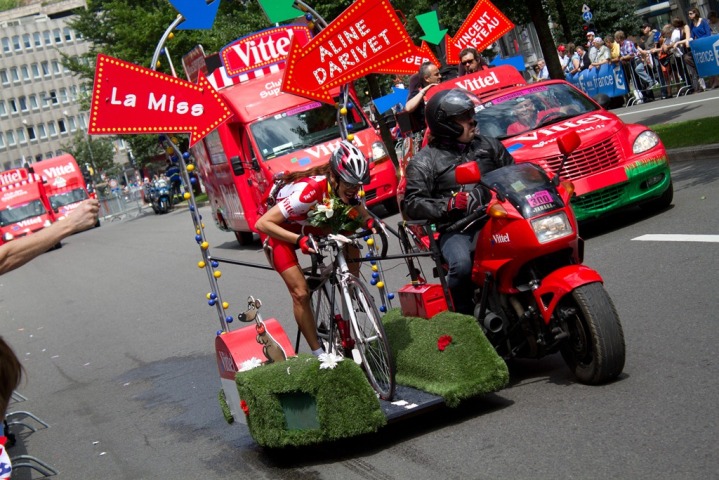 But still, there was no sign of my hat.

At this point in the parade we had made friends with those around us, and when we grabbed double or even triple of some swag we handed it off to the next person, usually kids. Every now and then when someone did a one handed catch of the only piece tossed out from a float, cheers would erupt.

Then suddenly, I saw it! The entourage of Carrefour. The sponsor of the “King of the Mountain”. My excitement did not go unnoticed! 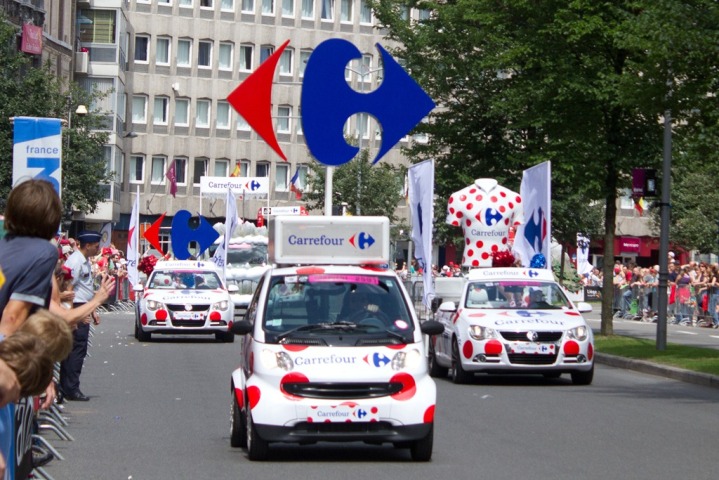 I begged Ray to please help! No cameras, focus on the hat!!! 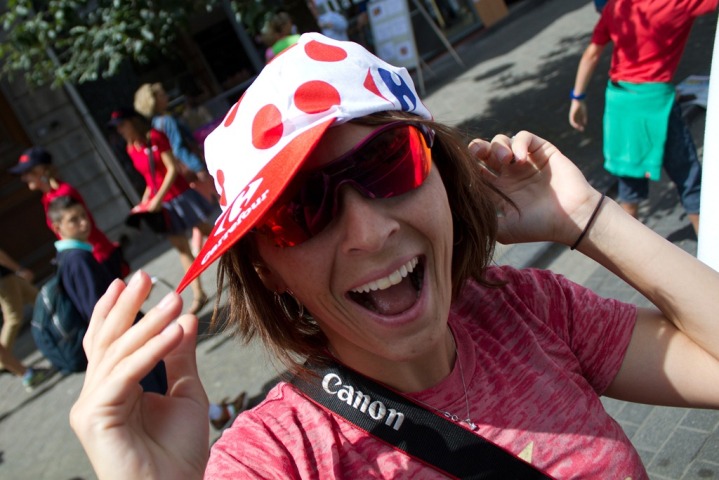 And sure enough, as there was only one or two hats tossed out in our area, Ray one hands it and grabs from the air (well above my reach I might add) my very own Polka-Dotted hat! As Ray handed it over to me, my excitement was well received by the crowd as they cheered!

As the parade continued, we noticed a few well devised strategies for obtaining swag – useful if you are planning on heading out to the Tour and catching the parade, so take note.

The below photo shows strategy #1. Extending a hat for the floats to deposit goodies… sorta like Halloween trick or treating! 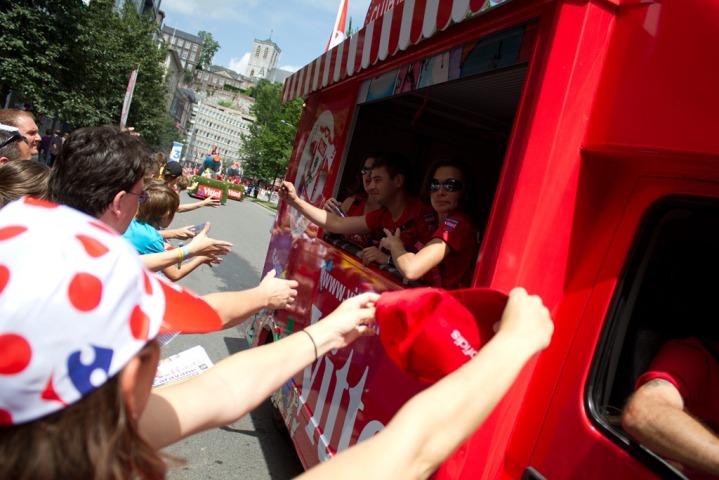 Or, strategy #2. Bring your kids. If you don’t have kids, borrow some! Little kids can seriously do some damage racing around picking up items that have been tossed into the crowd. First, they are already closer to the ground than you and me (alright, just you) which makes bending down way more efficient, and second, nobody is going to play tug-a-war with a kid over a hat, jersey, or jelly beans! Whereas as we did see two ladies nearly duke it out for a foam cell phone!

At the end of the parade we reflected on all that we had nabbed. 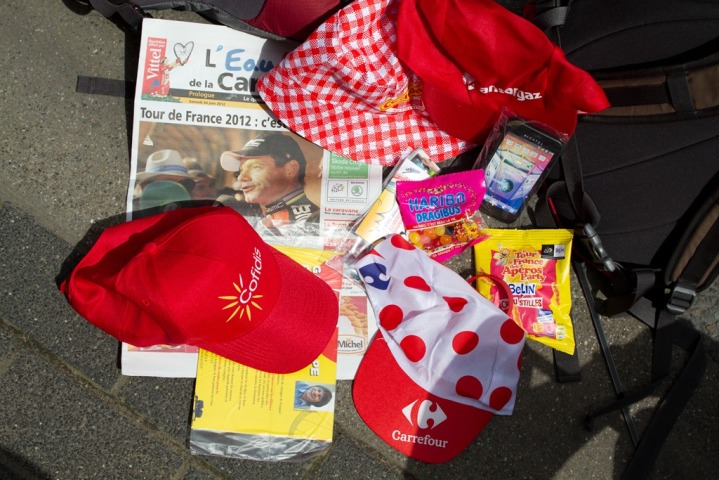 Other than checking out the goodies we have squirreled away we also reviewed the photos for decisions on our favorite floats and aspects of the parade!

First up, the giant cycling rooster: 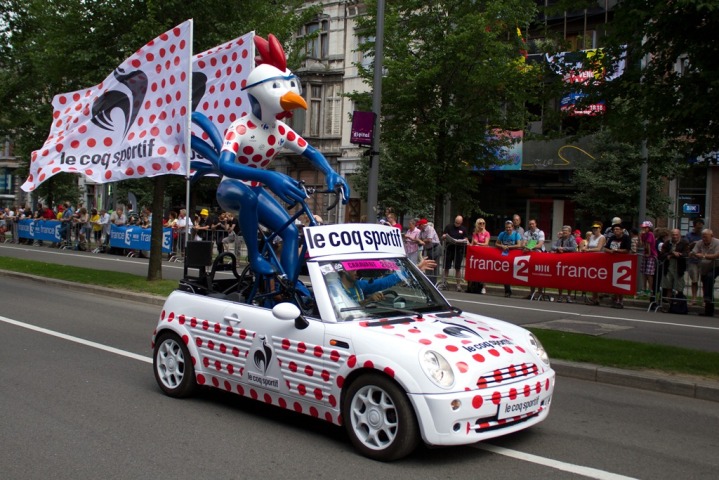 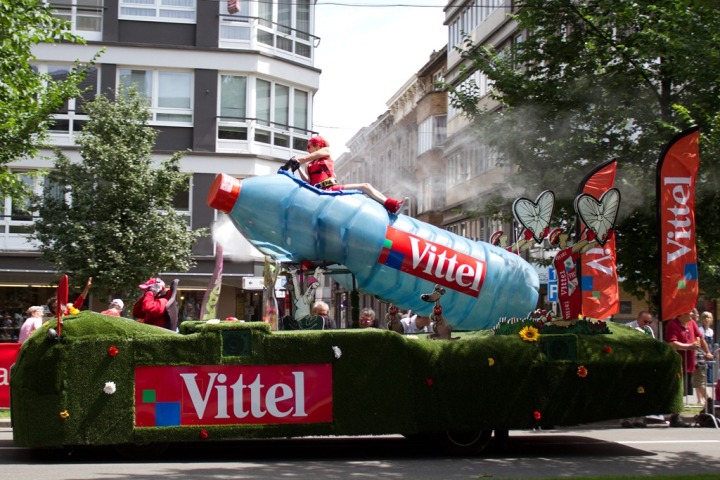 Then there’s the giant 3/4ths tire rolling down the road.  The cyclists were warming up on the TT course at the time, dodging all the floats. 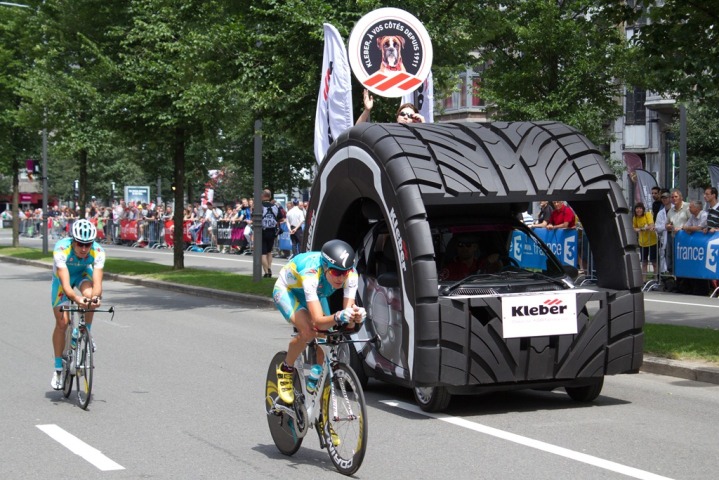 I am not sure if they warm-up like this on all of the TT courses (since this one was exceptionally short at just over 6K), but it definitely seemed like a unique opportunity to see the athletes warming up amongst the floats! 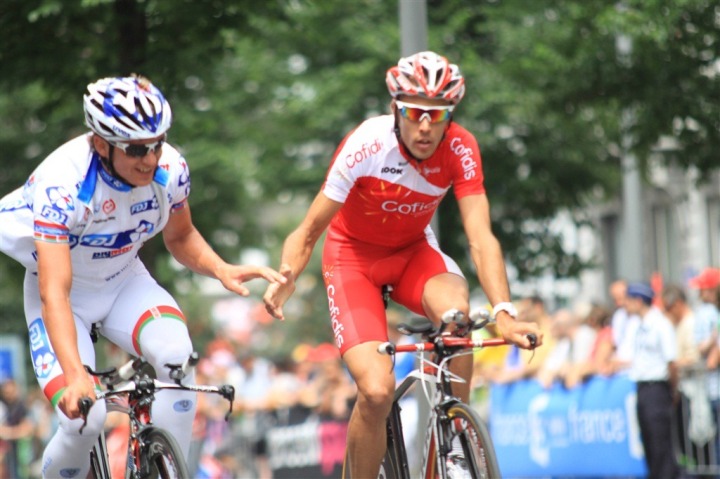 As well during warm-up laps it was really cool to see athletes from different teams right up along side of one another and shake hands and chat for a lap or two. I think this simply reminds us that these guys are human.

And finally, the best part of the day was spending our 1st Anniversary weekend together watching a sport and eating the food that we love! 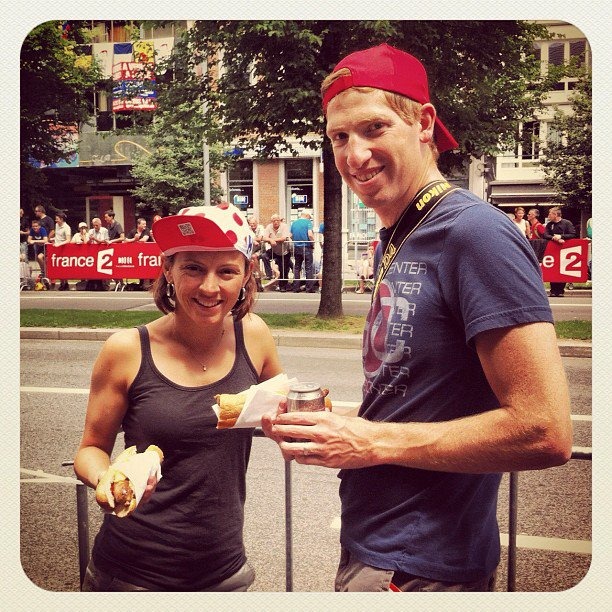 And yes, those are hot dogs (well, sausages), and Diet Cokes.  How much better can it get?

Have a great (and safe) Independence Day everyone (in the US), we’ll be watching the fireworks as well back in the states, as we’re headed back for a few final items for a couple days.

[Update: Here’s the full video! It lasts about 30 minutes, which is as long as my point and shoot lasted before it died battery wise.  It goes a bit longer though after this.]