A Weekend of Trail Running and Mountain Riding

While I spent quite a bit of time myself working out, I started the weekend watching others work out.  Or, more accurately, watching them race.

The Carpenters Shelter 10K race was held on the street in front of our place, so it made for an easy race to go spectate.  At a couple minutes after the 8AM starting gun, we headed out to catch the wave of 500-700 runners swing by our front door (about 1.5 miles from the starting line). 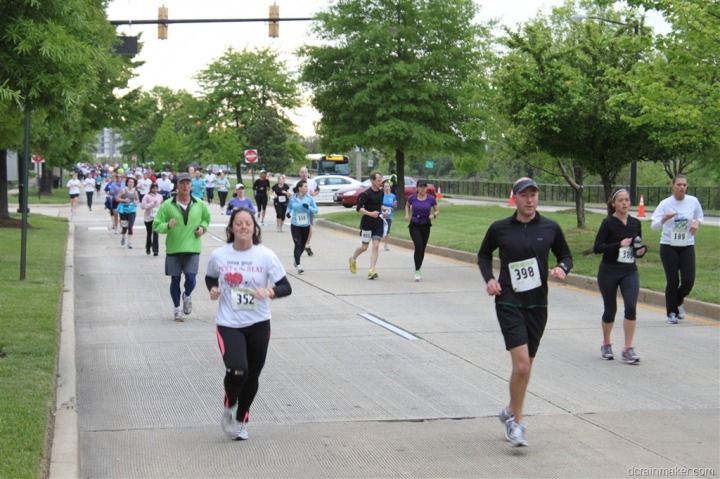 It was cool to see a few familiar faces, as well as have a few folks recognize us.  Congrats to everyone that ran!  And to the race organizers for getting such a big crowd for a first year race, especially one that benefits a charity.

And, I saw something I’ve never seen before in a race: Someone actually carrying a DSLR camera with them while running.  The woman below was hand-holding a DSLR camera (sorry, my shot of it was very last second).  Impressive…quite impressive. 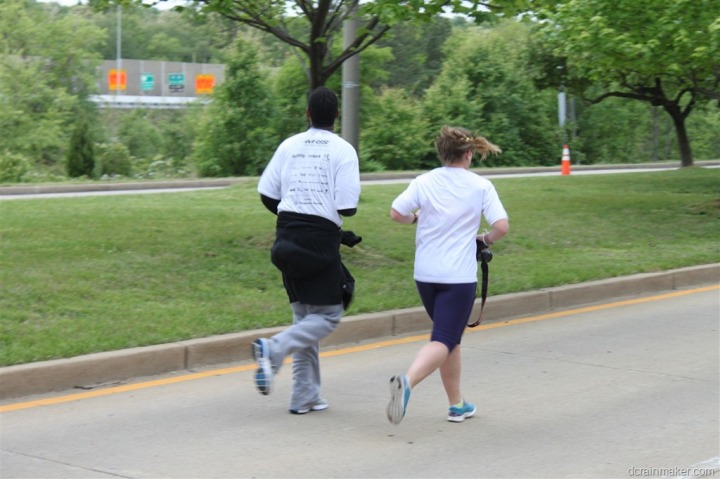 After we wrapped up spectating, I eventually made my way down to Fountainhead Regional Park, which is a pretty gigantic swath of land with endless trails to go running in (as well as horseback riding and in some areas, mountain biking).  Oh, and archery.  Though, I’d be trying to avoid that chunk of land.  Don’t want to have an arrow in my head. 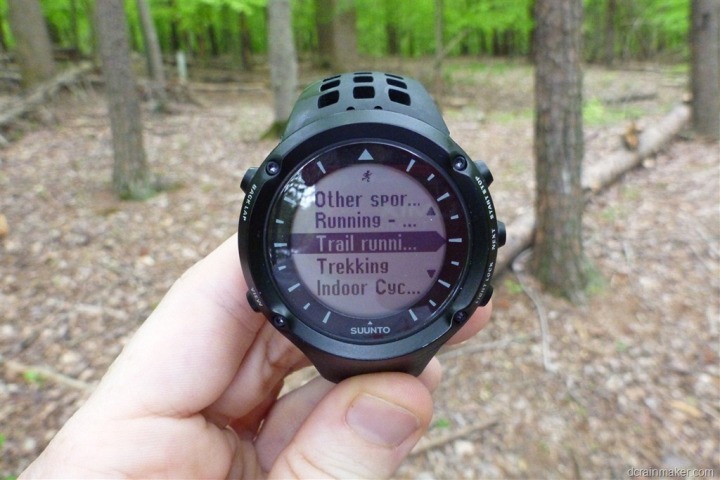 For my run I’d be doing two loops of the 5-mile Fountainhead Backyard Burns course, a local trail running series in the Fall/Spring (see some photos I’ve taken in the past in that series).  I downloaded the route and had loaded it into my Garmin FR910XT unit, but upon trying to start the course while in the parking lot, it would crash my unit.  Luckily, I had printed out a paper map of the route as well. 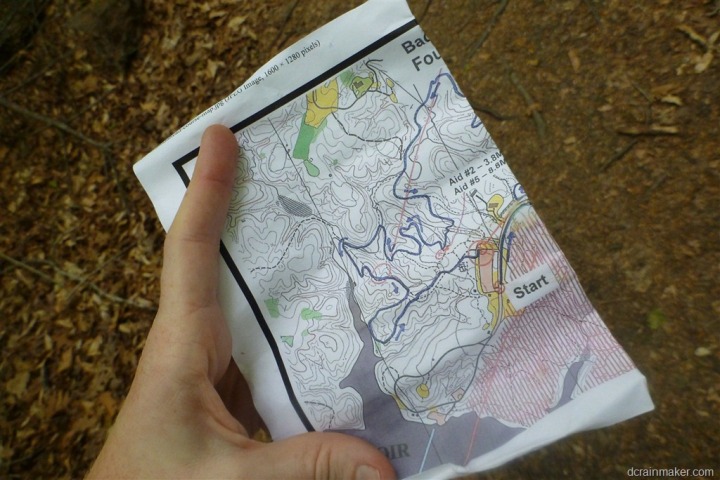 Unfortunately, I wasn’t terribly successful with said paper map.  In fact, I got a rather “scenic” 10-mile run in, of which only about 2 miles were actually on the correct route.  Due to the beauty of GPS units though, I was later able to see where exactly I ran.  Which…was not at all near where I thought I ran.  My red circle on the map below shows roughly where I should have been for my two loops.  The green shows my actual route. 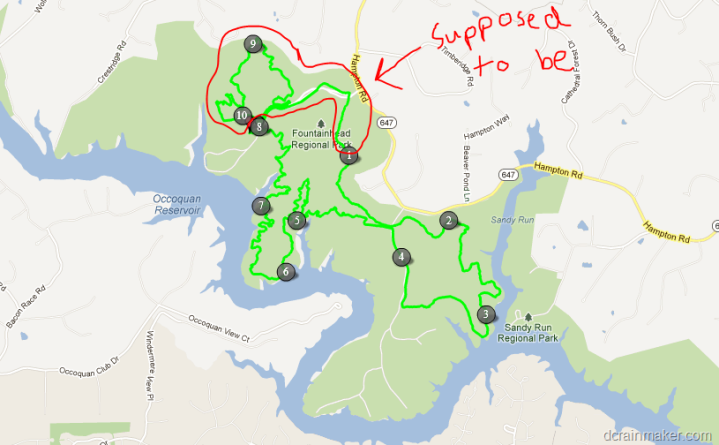 On the bright side, I did get to see lots of interesting things I wouldn’t have otherwise seen.  For example, this car below.  He was hanging out down near roughly that three mile marker. 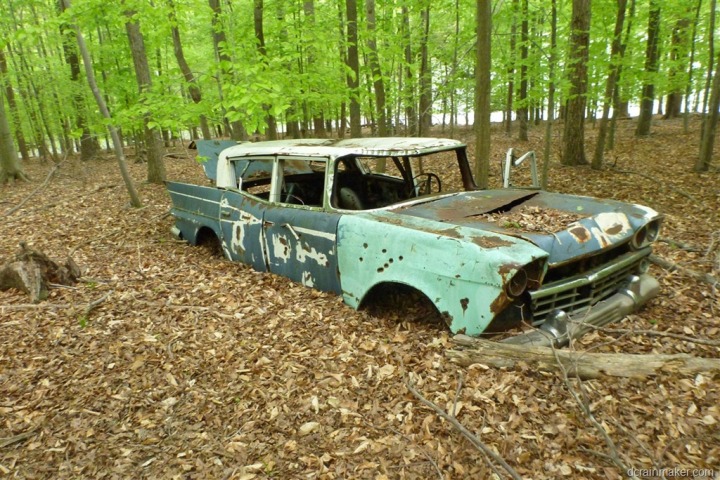 And at one point I crossed paths with the mountain bike trail.  Only saw about 2-3 mountain bikers out there.  But, their trail was pretty cool looking as it wrapped down a hillside. 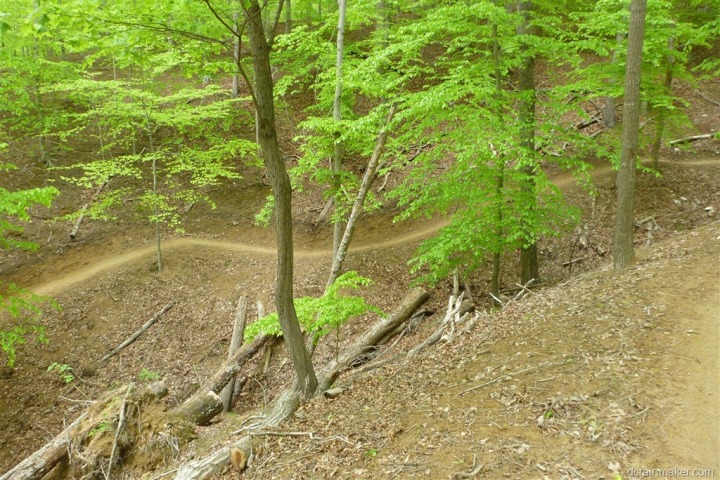 Much of the time I was wandering on paths with little horseshoes marked on trees.  If only I had a map with said horseshoe markers I would have been elated.  Otherwise, they were just as good as Christmas Tree decorations. 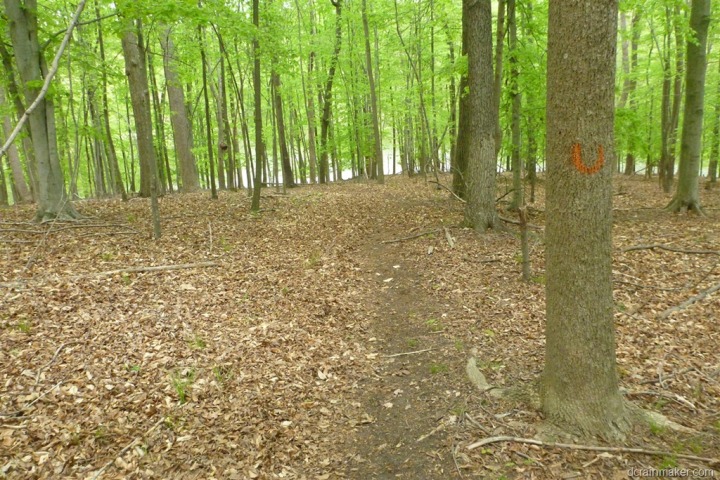 Along my way I also got to see an owl.  Yup, Hootie!  He was actually quite large, really hard to give you a feel for his size, but this was no mini-owl.  No, had he wanted to do some damage to me, it would have likely hurt.  A lot.

I believe this is the first time I’ve seen an owl while running/cycling. 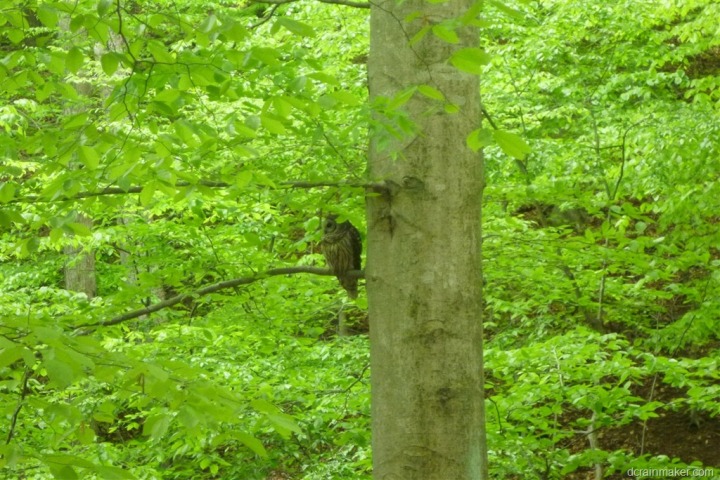 Despite my getting lost, the two units I wore mostly didn’t.  It was interesting to watch as the exact distances they were tracking ebbed back and forth a bit between the two units.  They were usually a fair bit closer (within about .05 miles), but in the last mile the Suunto Ambit dropped behind a bit (or perhaps the FR910XT counted some extra, who knows).  But, I’m actually fairly impressed that both units were as close as they were to each other (9.91mi vs. 10.05mi).

I however have zero confidence that they were anywhere near accurate with respect to however far I actually ran.  It’d be interesting to be able to run on a dense trail like this that was correctly measured prior (like I do in my accuracy tests…but for 10 miles) to see how they shake out.  I’d guess I probably ran closer to 11 miles.  Maybe more. 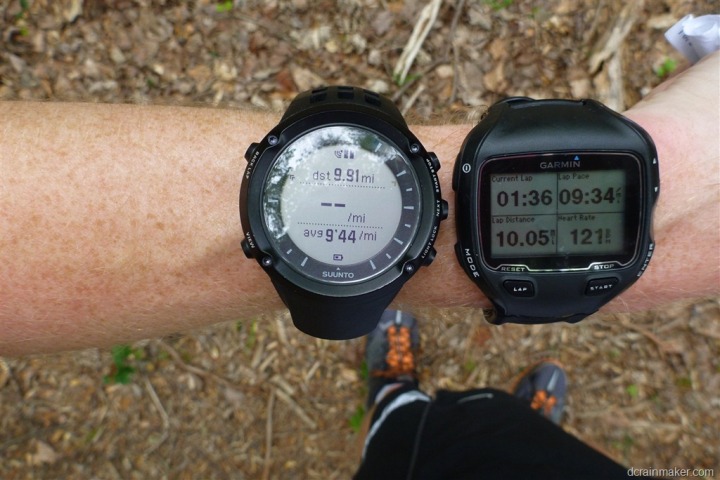 With my trail run complete, I headed home and ate chocolate truffles.  Yes, they were awesome.  No, there are none left.  Well, except a few in some tiny little boxes for a few select folks.

The next morning (Sunday), I headed out to Skyline Drive for my bike ride.  I was meeting up with a reader (Brian) who had e-mailed earlier in the week about meeting up.  It was like a date, except, without any question of first kisses afterwards.

We were both initially a bit concerned about the weather, since it was looking to be pretty nasty out this weekend.  But thankfully, the weather was anything but bad: 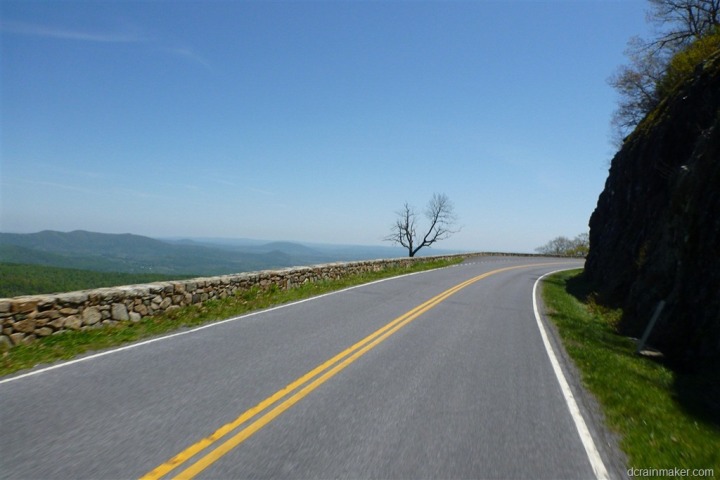 For those not familiar, Skyline Drive runs atop Shenandoah National Park, alongside the Appalachian Trail.  There’s really no flat ground, you’re either going up…or down, all of which is atop the ridgeline. 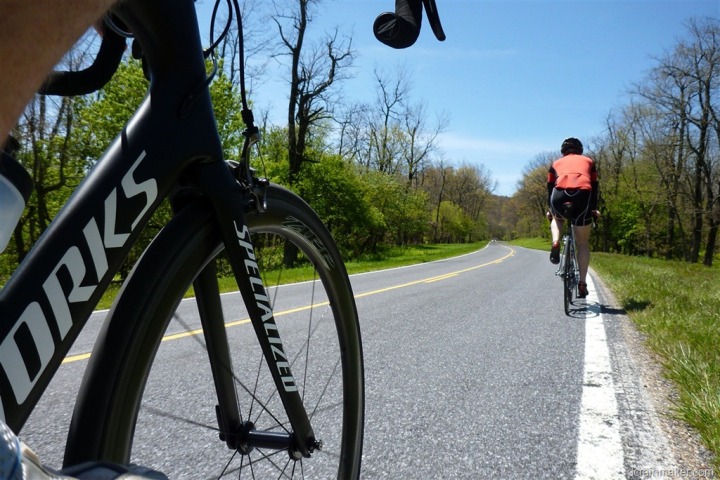 That’s Brian above.  Or, well, the back of him.

This would be my last outdoor ride with the Specialized Venge bike and the Quarq SRAM Red.  They let me hold onto it a few extra weeks since the Polar/Look Power Meter Pedals came back in, so I could show you the specific differences between how the two companies implemented power balance metrics. 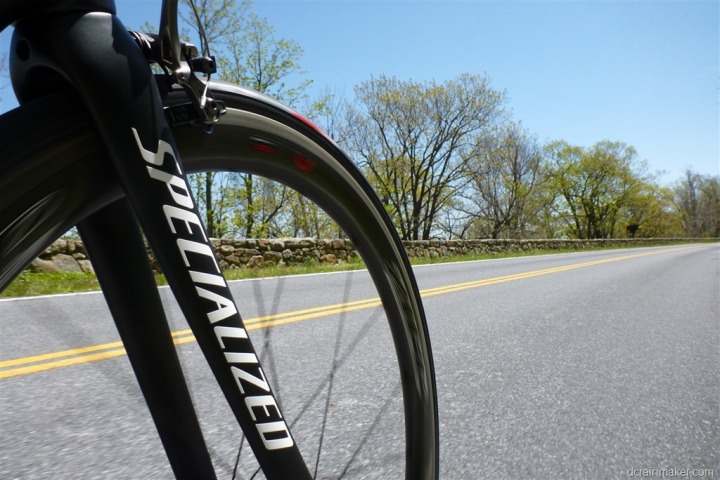 And, I’ve now got plenty of data to do so.  In this case, you see me mid-climb with the Polar unit capturing Polar left/right pedal data (58%/42%) and the Garmin unit capturing Quarq PowerBalance data (at a brief moment showing my perfectly balanced at 50%). 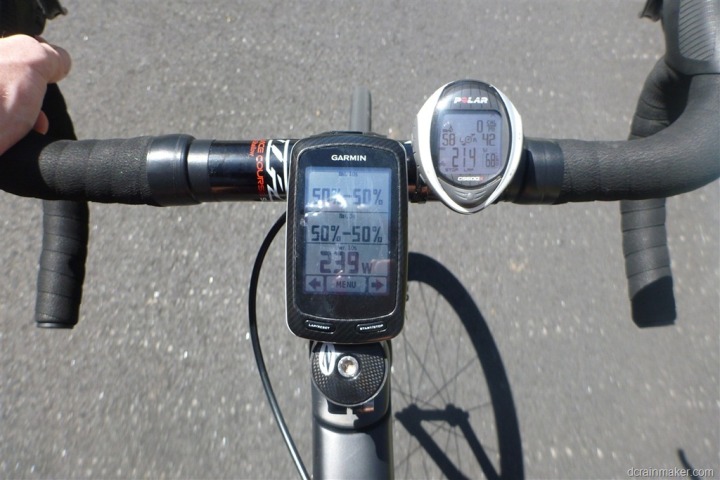 The ride was about 46 miles all in, with the top elevation being about 3,300 feet.  The highest point on skyline is just over 4,000 feet, a bit further down the road. 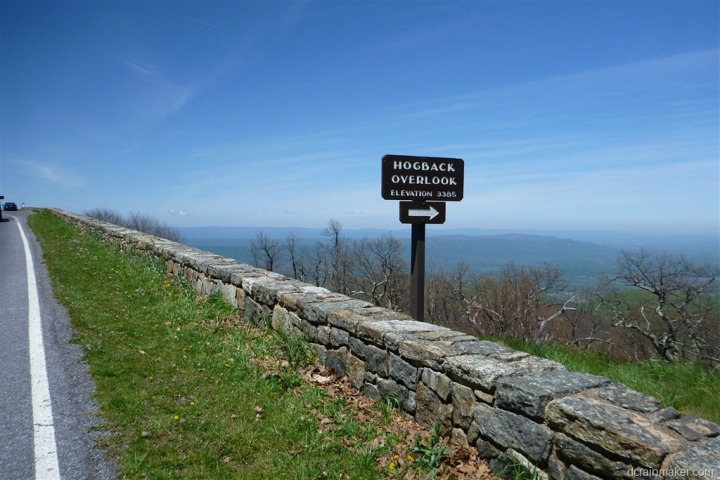 It was interesting to watch as we climbed to see the vegetation growth this early in the spring…or rather, lack thereof.

For example, at the highest point (below), you see virtually nothing on the trees: 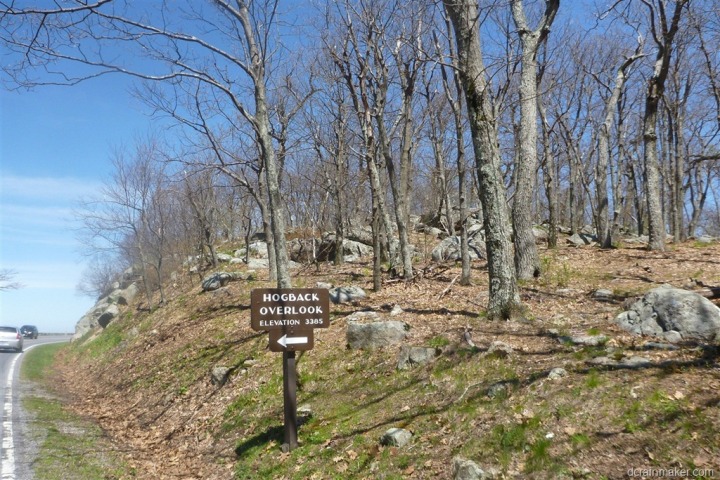 A bit lower, you can start to see some of the initial leaves coming in: 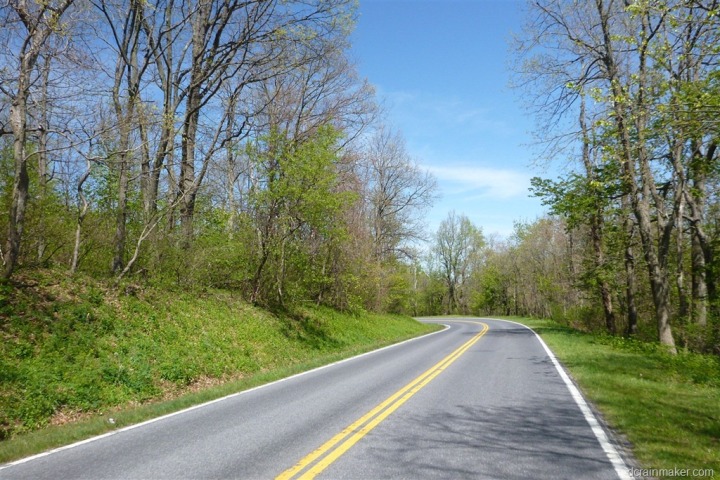 And the lower further (though still at about 2,000ft), it’s much more dense. Really kinda cool to see. 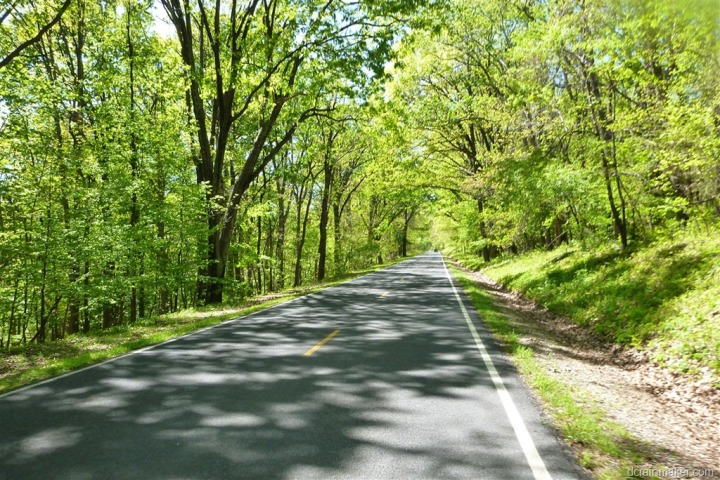 But most of all, I’m just happy that it was a great ride up there (and thanks to Brian for coming out to ride) – and that the weather was awesome for it. 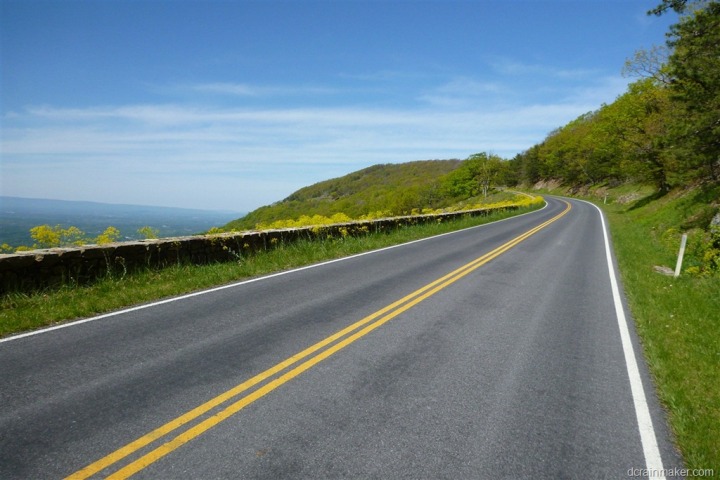 Oh, and towards the end of the ride, I caught up with some Team Fexy guys who were in the final miles of a 3-day 300 mile cycling ‘jaunt’.  Funny enough, virtually all of the group that I met up with were readers.  Small world…

So with that, my weekend was complete and I headed back home to knock out a slew of errands.  Thanks for reading all!  Hope you have a great week ahead!