(Brief side note: For those that saw yesterday’s Vector delay post, note that I’ve updated it late Wednesday evening with additional information regarding the Edge 500 & FR910XT firmware updates, as well as some additional info about the delay itself.)

On Monday I decided to convert my normally car-focused commute to work, into one on a bike.  I did this partly because my training schedule shifted a day, putting my longer bike on Monday, and partly because it seemed better than sitting on a trainer late Monday night for an extended period of time.

Because the route is fairly straightforward and along one of the busiest bike paths in the region (the W&OD trail), it’s one that I’ve ridden countless times.  Though normally I’m doing it in a workout scenario, and usually without a backpack on.  Overall the ride would be about 25 miles all-in one-way, inclusive of a minor diversion at the end to shower. 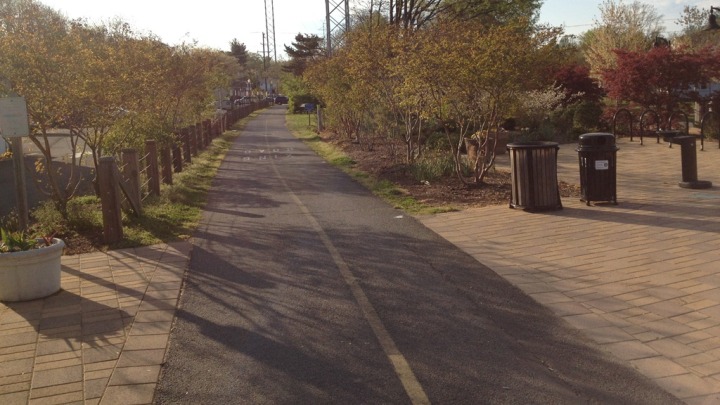 What was interesting to me though was actually looking at the power data.  In the case of the rides, I focused on simply getting to work (and not getting hit by any stray buses – a routine problem here in the DC area), and for the most part ignored any cycling metrics during the ride.  Of course, I still recorded them using the Edge 800.  Because I didn’t want to fiddle with pressing start and stop, I just let it record nonstop from start to finish (yes, I could have used Auto-Pause, but that can mess up Normalized Power numbers).

The morning ride started early enough that it was a bit cool, but not too bad.  What did suck however (or blow), was the wind.  It was howling out Monday morning, and a direct headwind as I headed away from the city and towards the mountains.  The route itself is slightly uphill over the course of the ride, enough that I end up gaining about 1,000ft in cumulative elevation (total ascents).  Not a ton, and far more noticeable on the way back (downhill).  Sorta a perfect false flat.

The best way to look at a ride like this is using normalized power – which helps to remove much of the ‘noise’ associated with a ride such as a commute where I’m frequently stopping at crosswalks, lights, signals, and navigating around cars.

On the outbound, my normalized power (NP) was 214w (Avg Power was 193), and my average speed was a whopping 14.45MPH (remember, inclusive of stopping at lights).  The ride took a wee bit longer than I anticipated, primarily due to the steady headwind.  Heart-rate wise I averaged Z1 (130’s), though while not stopped I was mostly in a Z2 zone.

So why is all this interesting?  Well, it shows as to some of the value of a power meter.  It helps to even out aspects such as terrain, wind and others.  I’m able to pretty clearly say that despite the fact that my morning ride took 17 minutes longer than my afternoon ride – they produced identical intensity factors, as well as identical normalized power metrics.

However, when you look at TSS (Training Stress Score), you can see a bit higher impact with the morning ride, essentially due to the duration being longer.  The morning scored 82, while the evening scored 68.

And, this is where the real power of power comes in – as this more accurately matched my perceived effort (PE) of the two rides.  With the return being primarily downhill and with that totally awesome tailwind, it was faster.  But, because I had a bit more energy in the evening (the power of Pretzel M&M’s) – I kept up the intensity a bit.  Not quite to the level of a normal Z2 long ride, but just a bit under.  I primarily just focused on getting home in the most efficient manner possible.

Of course, the above is what happens when you get a data geek that has nearly 3 hours on the bike to ponder what the power numbers are looking like…

Some of you may be wondering if I’ll continue to add the 50-mile round trip bike commute.  In many ways, I enjoyed it – especially the afternoon being a bit quicker and a bit warmer.  And it certainly beats sitting in traffic.  Normally it takes me about an hour to drive, so it’s only a differential of about 20-30 minutes each way depending on how I luck out with stop lights during the ride.

On the flip side, it’s not a good replacement for my existing long ride.  It doesn’t involve the same consistency that you really need for long rides, where you can get into a zone (any zone) and stay there without interruption.  Also, there are significant differences between 2x~90m rides, and one three hour ride.  That doesn’t mean it’s not beneficial, but it’s also just not the same as a single uninterrupted effort.

Of course, I’ll certainly find a way to work in DC’s Bike to Work Day on May 18th, as well as the nearly half a dozen pit-stops along the way (free stuff!).  Plus, pickup of the free t-shirt!

And finally, for those curious on the logistical aspects of the commute.  I simply used my triathlon bike.  I certainly wasn’t going to ride my now-broken mountain bike 50 miles, and I much prefer the comfort of my tri bike to my road bike.  Also, my road bike doesn’t have a power meter.  Because I didn’t fully think through what I’d wear on Friday (so I could have dropped it off Friday when I drove in), I ended up taking my clothes in a backpack and then showering at work.  I just carried the backpack on my back (no panniers on my triathlon bike).  Obviously, there are bikes better geared towards commuting, but this particular route worked fairly well for a triathlon bike.  Oh, and the $800 bike hasn’t quite arrived yet, working through a slight ordering snag there…

With that – hope everyone is having a great week – and thanks for reading!