It’s that time again…time for the rare non-gadget mailbag to make its appearance!

Since I started doing the Slowtwitch Weekly Mailbag’s last year, I realized I’d been slowly building up a pile of non-gadget related questions.  See, before the Slowtwitch mailbags conversion, I ended up answering all sorts of randomness that would float into my e-mail mailbox.  Everything from nutrition to travel, cooking an egg, and how I plan for races and training.

Since the conversion though, I just answer those in e-mail (well, I try and answer them anyway, sometimes I get behind a bit).  But after I send them, they ultimately just hang out in my sent items.  So I figured I might as well sift through them and find some that were interesting or otherwise entertaining.

This won’t be a weekly column, bur rather just a once in a while sorta thing.  You know, like freshly made cannoli’s.  Unless, you get freshly made Italian treats every week…in which case I’ll need to know your address and oven opening time…pronto!

“Hey Ray!  Was wondering if you had any links / docs for Half Ironman Training plans.  Either something you’ve used or ones you would think look good based on your experience.

I’m looking to do my first HIM in October, but won’t be satisfied just finishing.  I’d like to push myself, but realize the limitations of having a 9-5 job.  I have 10 marathons under my belt and have cut back on running and started building my bike and swim for the last few months.  Any info / suggestions you have would be great!”

The one I initially used pre-coach was the Triathlete Magazine Week by Week Training Guide.

It actually worked pretty well for me.  The workouts were structured – but not overly so.  It was really up to me to do the work.  They had different skill levels, and then different race lengths.  The best part is you can drop by your local Barnes and Noble store and thumb through it – as I know they have them in stock there.  It’s in theory paired to a larger book by them, but I never bothered with that honestly.  I didn’t use the HRM monitor then, just pace and distance.  But in retrospect you could use it as a general guide for determining what workouts are labeled ‘hard’, ‘easy’, etc… Or you could just go on experience – either way works.

I haven’t tried any of the online coaching plans or guides, mostly because I feel that in the end I’d rather have control over knowing my own training (or knowing personally who was doing my training plan), and if an online coach through one of the big services has some 50-200 people ‘under him’, it’s probably not that personal.  Just my two cents though.

“I love your posts. It’s always the first thing i check when i wake up. I’m just getting into triathlons and was looking to purchase a bike trainer. I don’t want anything special, just something that will let me ride inside. I have a bike computer that I like. Do you have any suggestions?”

Honestly, my favorite little/cheap trainer is the Performance Bike Ascent Trainer (just search their site for the cheapest trainer, it’s bright red).  Little Red (as I call it) is only about $80-$90 most days (it’s on sale just about every other day, so if it’s not…just wait a week).  It’s a great starter trainer, and will provide resistance up to about 280-300w worth. 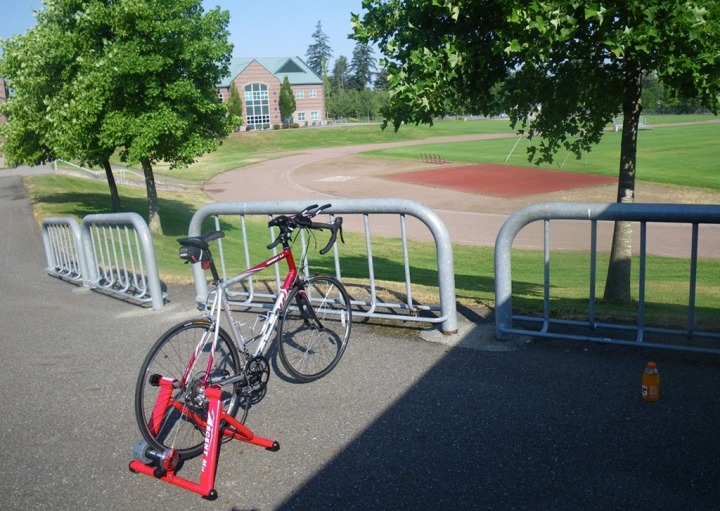 (Little Red and my older Seattle bike, hanging out at the track a few years ago.)

There’s also a few models up to about $150 that will allow you to control resistance from your handlebar.  I also have one in the $150 range from Performance that does that quite well and is a great option for a step slightly up from Little Red.  I don’t see it in their online store at the moment, but perhaps my favorite part of it is that it has a quick hard plastic locking system that allows you to snap in your bike in about 10 seconds – compared to most trainers requiring lots of twisting (looking at you, CompuTrainer).

Question #3: How my WiFi Scale Adds to America’s Class Divide (…or not):
From Henry:

“Below is an article I came across on Bloomberg covering the unprecedented connectivity there is now for health statistics online via products like the Garmin FR610, Withings WiFi Scale etc.

The article delves a bit into the impact fitness products like the ones you cover in your blog have on users’ lives.   However, instead of tying it to triathlon and fitness, the writer ties it to class divide and social inequality (less interesting).  It mentions so many of the products you cover I thought it may pique your interest to send along.

I imagine you’re life is pretty well documented via all the devices you use and review.  It may be an interesting post to just one day go through a typical Rainmaker “day in the life” and touch on the involvement of all the devices you come in contact with through a typical day and what all is getting saved and recorded for later review.  Best wishes and thanks for all your hard work that goes into the blog!”

Thanks Henry for the link.  To answer your actual question first – that sounds like a great idea for a post, and I’ve stashed it away on my list.  Indeed, I use a lot of devices on a day to day basis – though some days it might surprise folks what I do and don’t use.  Today for example, the only bit of sports technology I used is a cheap $15 Timex Ironman watch from Target, or maybe it was Walmart.  Either way, it was cheap.  Yet other days I do indeed go through the gauntlet of sports technology.

But the reality is that none of these are required to keep you fit.  None of them are required to keep oneself from becoming overweight – or to correct themselves after becoming overweight.  For me, when I was some 60 pounds heavier than I am now, the only thing I used in getting back to the weight I am today is a $15 watch and a cheap bathroom scale from CVS (less than $20).  Realistically, neither were needed.  A simple look in the mirror will tell me what the scale will over time.  I didn’t have a GPS watch, instead, I went out to free sites like MapMyRun and mapped out my routes and then checked my watch times later.  Heck, some times I didn’t even wear a watch – I just looked at the Microwave Clock when I started and got back. I’d occasionally write down my times, but most times I just ran.

Keeping healthy is about making responsible choices – not about technology.  It’s about deciding what to eat – even if it’s at McDonalds (where you can still eat healthy if you pick carefully…trust me, been there, done that).  It’s about deciding whether to exercise – even if it’s doing sets of pushups and other core exercises in your living room.  And it’s about choosing to become educated about what is healthy and what isn’t, and learning how to keep oneself fit.  Unfortunately, today, it’s this last one that’s been lost amongst the sea of information and misinformation out there.

Question/Comment #4: Why you should always ‘Do as I say, not as I do’:
Backstory: I wrote a post a while back about how I travel with my bike and it’s bike case.  Recently I received the following e-mail.  I thought it was well written, funny, and nailed the point perfectly.  And I figured you’d all enjoy it.

“This email all ties back to your post in Feb about travelling with your bike. Here’s some background and my story:

Having relocated to Hong Kong for work from Australia I have never really done too much air travel with my bike and when I initially moved it was by the trusty cardboard box method. Since living in Asia is simply too convenient not to indulge in taking the road bike to various countries under the guise of training – I needed some insight into the airline industry.

After hearing multiple horror stories (about soft and hard cases) I took your post pretty much word for word. Ordered the Aerus bag, visited 50+ stores looking for pipe foam (a rare commodity in Hong Kong it seems) and packed the bike more or less as posted. The trip to Thailand went perfectly – bike arrived, no damage, assembled and rode 204kms the following day all without incident. In fact the bike handled it better than me.

At this point I was pretty impressed with how everything went. When I got back to HK a week later I was unpacking the gear while talking to my girlfriend on the phone when I untied (or cut the zippy tie) the rear derailleur only to see it fall freely away from the frame.

Now when I was packing my bike I recalled your clear directive:

“The rear derailleur I pull up against the bike frame using Velcro.  No, not ideal.  Yes, I should take it off.  I know…I know.  Do as I say, not as I do.”

I thought well Ray obviously knows what he’s doing and if it’s good enough for him then it’s certainly good enough for me! So I ignored your advice and happily tied it up against the chain stay.

After the initial moment of shear panic that my dropouts had been cracked (the girlfriend admirably handled the expressive words quite well) I realized that it was just the hanger that was snapped clean off. See below: 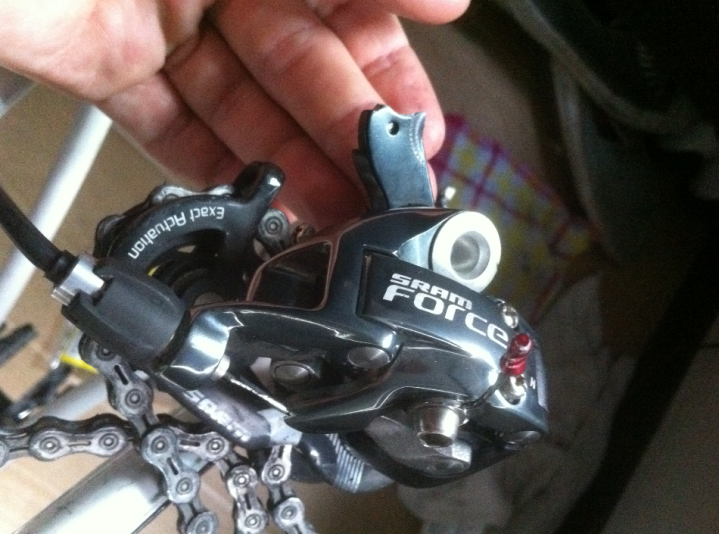 Roughly US$20 later the hanger is replaced and I’m back riding again after only one spin bike session (even 1hr is too much). I wanted to send you this email in the first case to say thanks for your post and then also provide maybe a little more motivation for you to get that rear derailleur off :)”

Thanks for reading everyone!

(Note: I’m currently away on my honeymoon, but due to the magic of automated publishing, you’ll be enjoying content in the meantime. Thanks for reading!)