Back a while ago I ordered the CamelBak Flow Meter (with my own money).  This nifty little $30 gadget is designed to sit inline on your existing CamelBak drinking straw/tube and measure how much you consume.  It’ll also tell you how much is remaining in the reservoir, and your hourly rate of consumption.

However, with the reviews heavily mixed I was curious to see if it would do what it was designed to do, or it it would be nothing more than just a gimmick.

First up though, a couple of quick pics of what’s included.  The packaging largely shows you just about everything that you’ll need, the only hidden item is the manual: 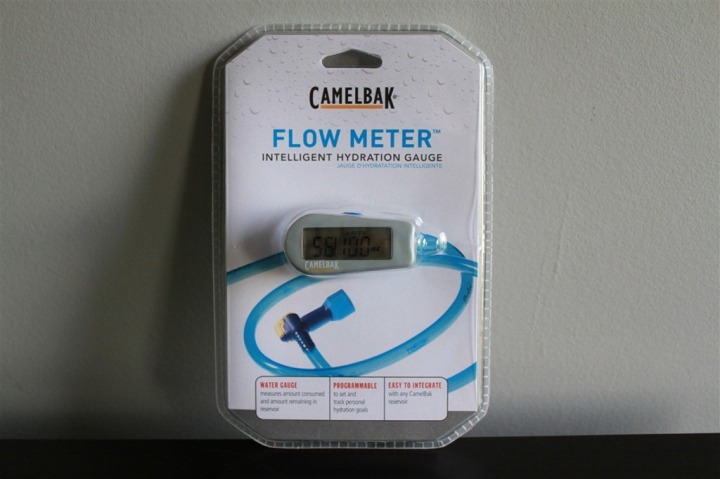 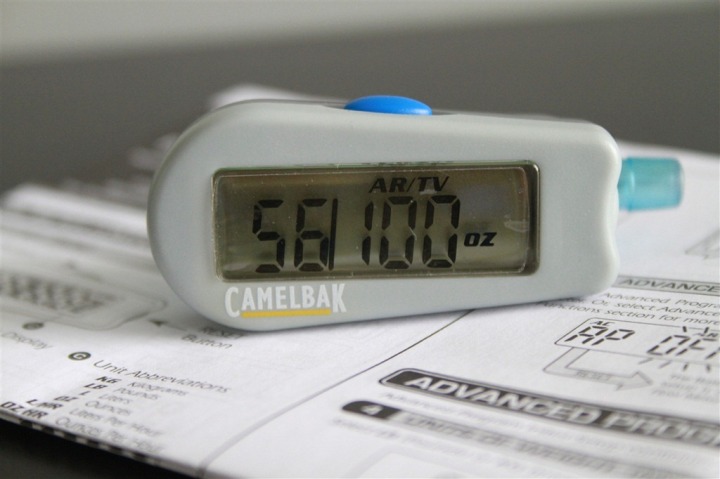 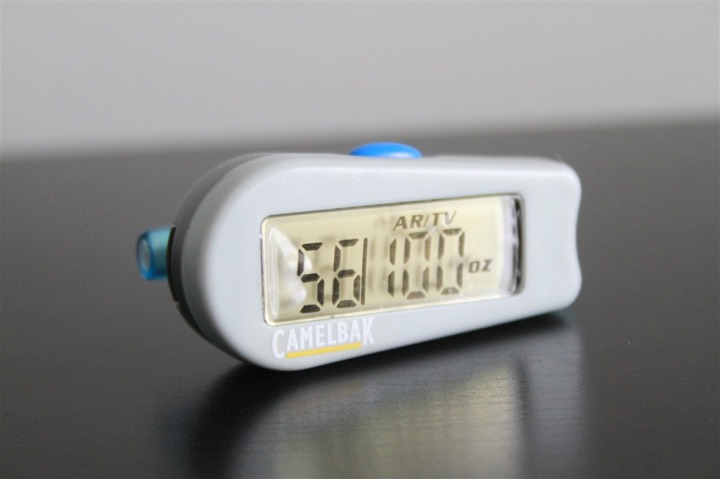 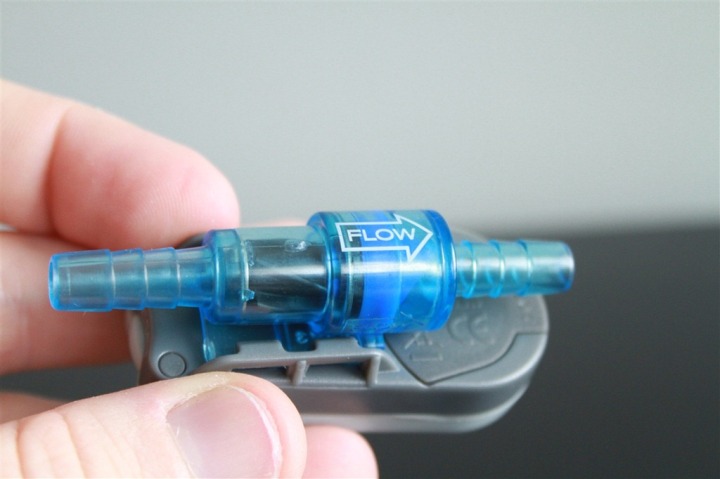 The manual is surprisingly long for such a simple device, but once you get into it you’ll find there are actually a fair number more features than just water consumed (such as hourly rates, etc…) – so that’s somewhat explainable. 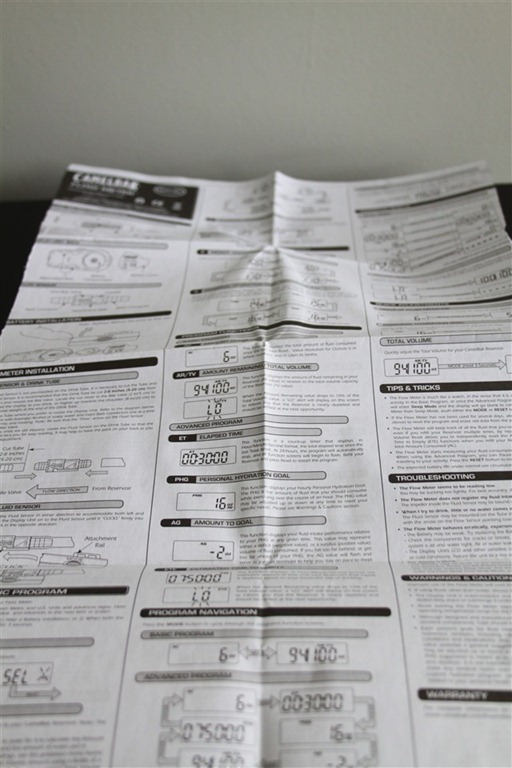 The installation is pretty straight forward.  First you remove remove a small slip of plastic in the CR2032 coin cell battery compartment, which keeps the battery fresh during it’s retail shelf time.  Then from there you’ll place the full unit inline the existing tubing on your CamelBak.  This will require a pair of scissors, and they recommend you slightly shorten the length of cable.  This is because otherwise it’ll be a few inches longer than before, once the unit is installed. 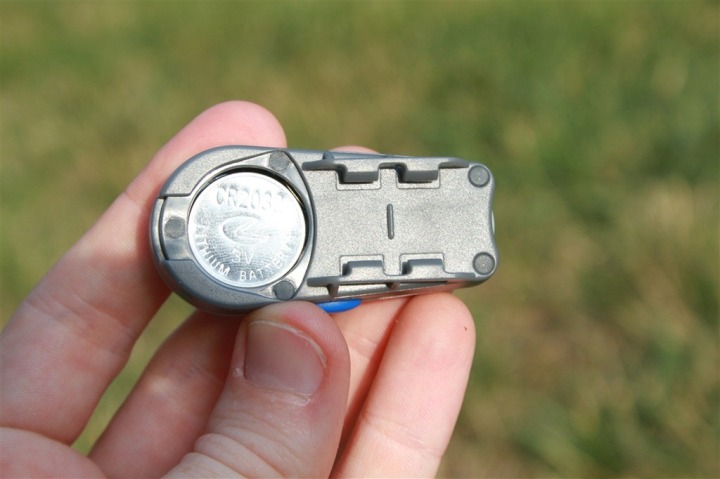 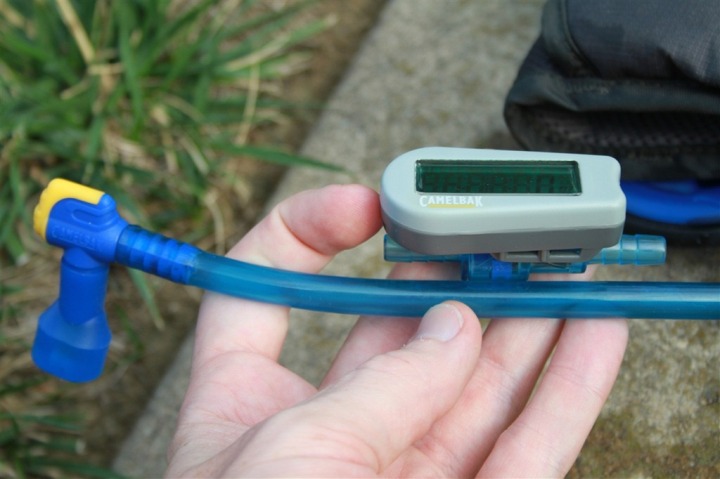 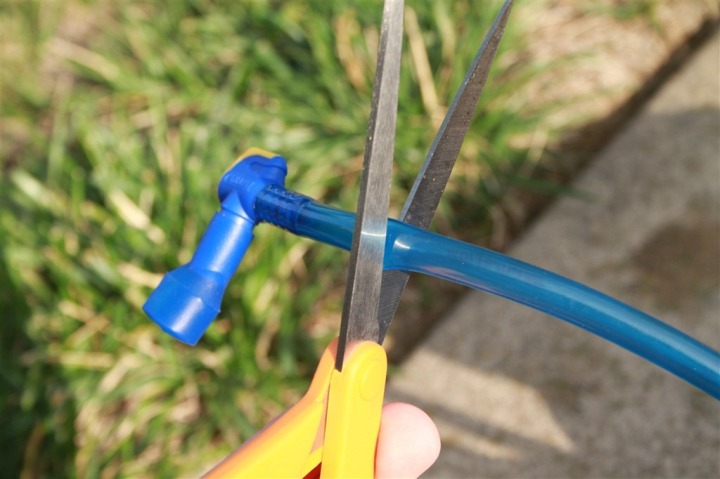 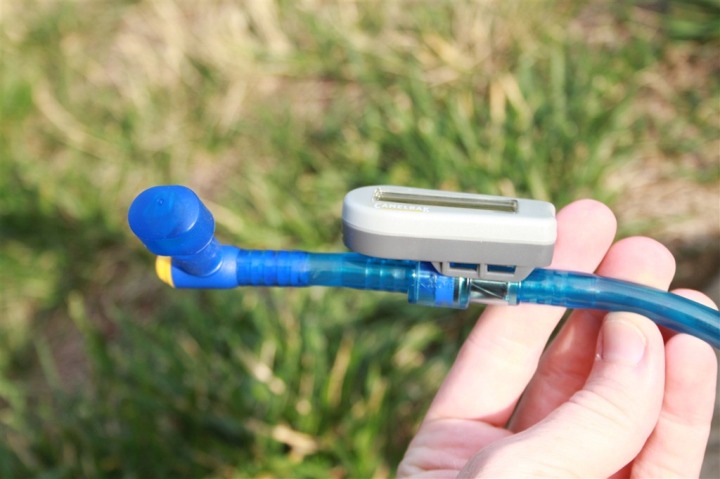 Once it’s all installed I figured it was time to measure precisely how much water I would be putting in the tank.  For some reason I always thought this was a 52 or 56oz CamelBak that I had – but turns out, it’s only 38oz.  So, my measurements include a bit of math: How much I thought I was going to put in, how much was remaining, and how much I spilled. 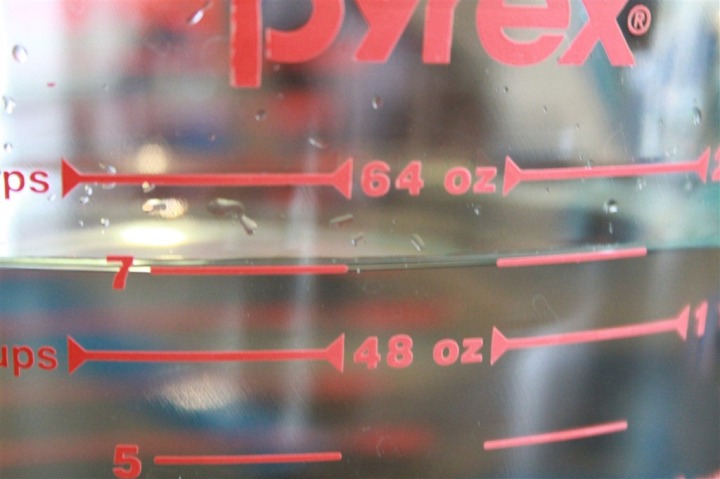 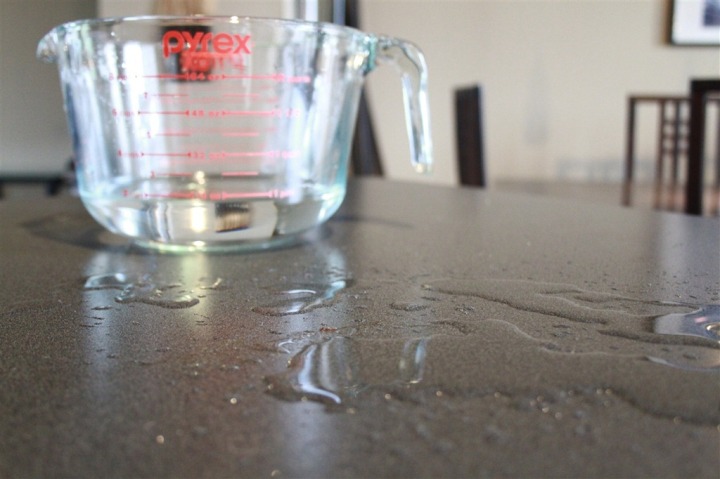 So all in I started off with 38oz of water (+/- 1oz).  You’ll go ahead and configure this on the Flow Meter, that way it can advise you of the remaining hydration. 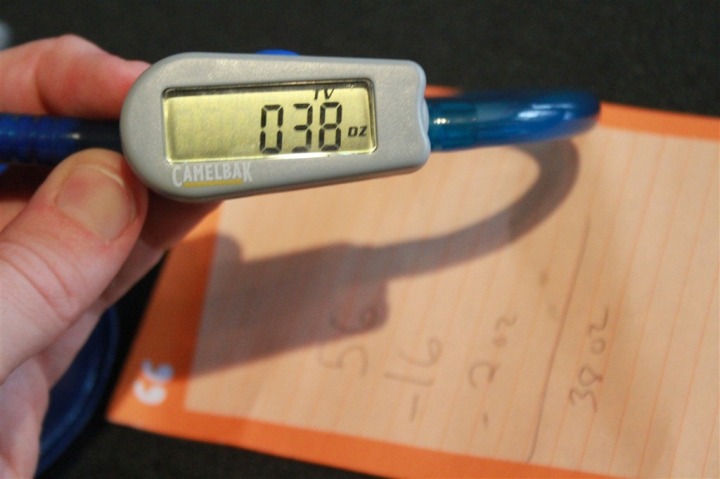 With that, I was set for my long run.  I simply put the CamelBak on just like normal, and placed the tube in it’s usual location semi-threaded through the strap.  I know the fancier models have magnets and stuff, but I’m kinda simple when it comes to hydration. 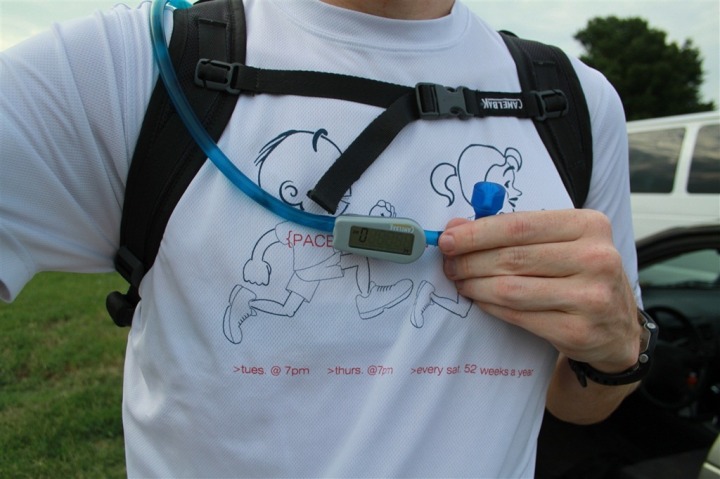 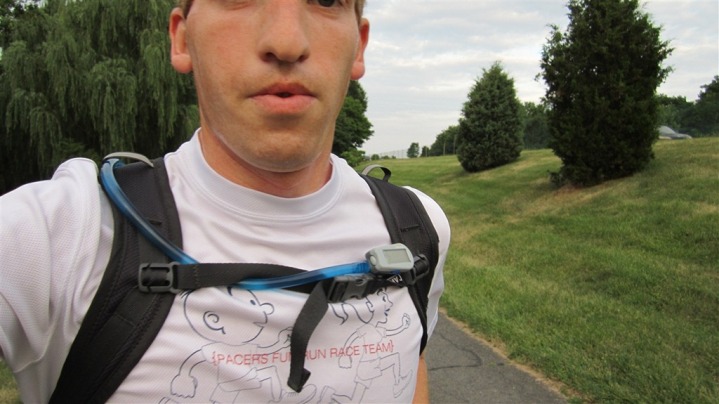 A few miles later I went for my first drink.  And as expected the unit showed I was successfully drinking – good deal!  More miles later and it was still showing consumption was occurring: 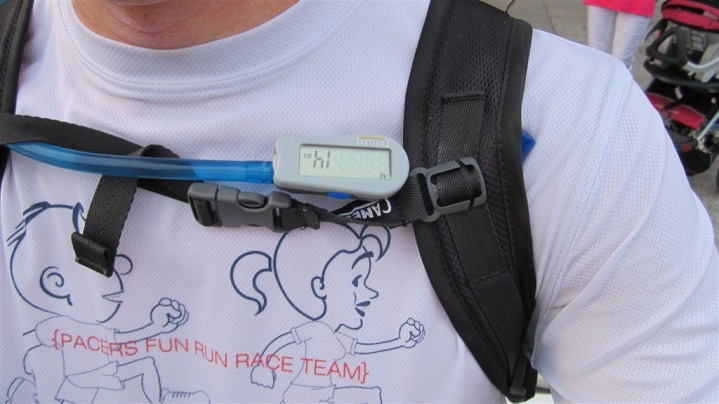 I was slightly surprised that I had to drink more than I thought to get it to ring what I figured the ounce measurements were – based on years of refining how much I would drink. 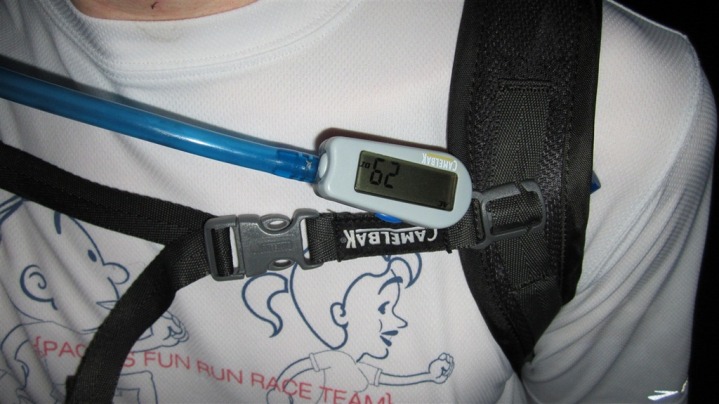 The drink and watch system would continue for the rest of the run.  Eventually about a mile from the end of the run I ran out of water.  I found this slightly puzzling since the unit said I still had about 25% left (8oz) in the reservoir.  I figured that perhaps there was some in there I just couldn’t quite get out.  I decided that I’d wait until home to investigate if there was indeed any water left in the unit. 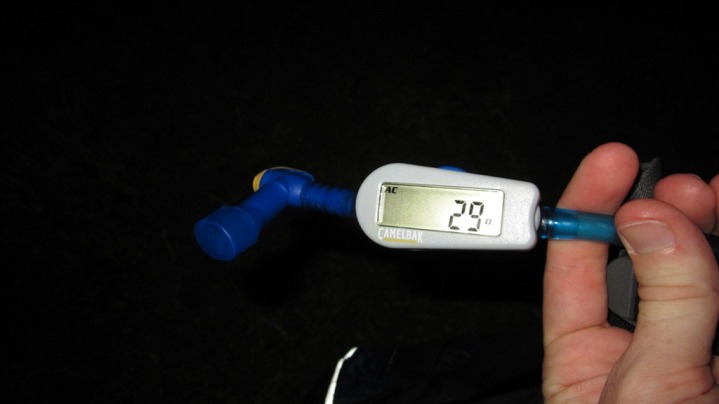 Once I got home I went ahead and opened up the CamelBak to see if there was any water left.  There was not.  It was sucked completely dry. Thus, despite showing I had another 9 ounces to go (38oz minus 29oz = 9oz), there was nothing left in the tank.

My experience of being short was in line with others showing similar results  In fact, the Amazon reviews generally say the same thing, as did just about every other review I could find on it.  Some folks speculate that it requires stronger sucking in order to get it to measure correctly.  Perhaps I don’t suck hard enough.

For fun, I went ahead and did a few tests at home where I sucked harder, and as strong as I could to try and empty it (fear not, I spit back out the 38oz of water and didn’t swallow).  Just like…uhh…wine tasting.

When I did this I found that it actually measured even worse.  In fact, I barely registered half of the water I placed in it (I put in slightly more this time at 40oz, and it came out at 21oz). 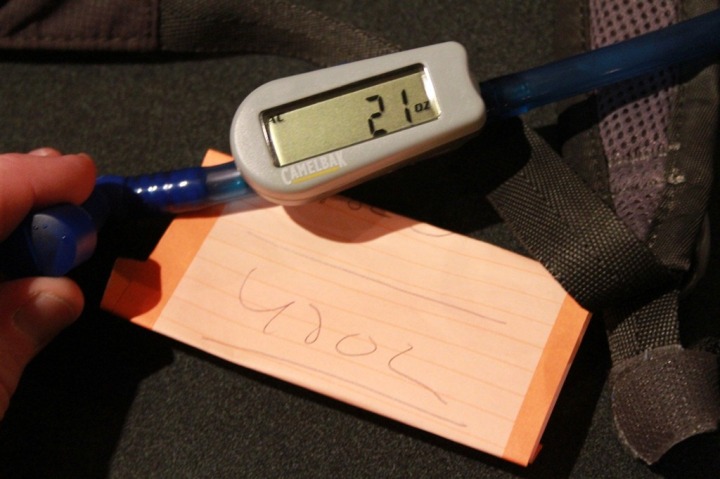 What’s too bad here is that this is semi-cool technology.  However, I think what would take it from ‘so-so cool’ to ‘really damn cool’ is if it:

A) Actually worked…
B) Integrated via ANT+ to push hydration information to any ANT+ device, like a Garmin Forerunner or similar.  It would be awesome to see on long rides/runs how much hydration I was getting, coupled with temperature and how I faired.  I think given enough data you could actually start to make some educated guesses as to hydration requirements for a given individual at a given heat/humidity level.  There was some chatting about this sort of thing last year at the ANT+ Symposium, but no action that I’ve seen yet.
C) Could be combined data wise with ANT+ skin sensors that are being developed to start developing a more comprehensive picture of an athletes body condition

In the meantime, since I cut my CamelBak straw already to make it fit, it’ll remain in there.  Perhaps I’ll just get better at sucking and it’ll work better.  Or perhaps it’ll never work better and always remain as a reminder of what could be…but isn’t.

If you’ve got the CamelBak Flow Meter – I’d love to hear about your experiences below.  Thanks for reading!

Finally, if you’re looking for recommendations on specific CamelBak’s or Hydration Packs, check out Donald from Running and Rambling.  He was one of the very first blogs I followed years back, and he knows just about everything there is to know about hydration packs (he’s from an Ultrarunning background).  He did a series a while ago on exactly these types of hydration systems, here’s the packs from that.

(Note: I purchased the CamelBak Flow Meter with my own dough.  CamelBak has no idea who I am, and I don’t know anybody there. The Flow Meter was merely a curiosity that I wanted to check out just like every other person out there.)

(Secondary Note: I’m currently away on my honeymoon, but due to the magic of automated publishing, you’ll be enjoying content in the meantime.  Thanks for reading!)