The Girl and I decided to make a little trip up to New York City for the weekend to visit some of her friends.  From DC it’s a short 4-5 hour jaunt by land-based transportation.  We ended up using the Bolt Bus to zip up to DC.  The bus costs about $15-20 each way, and includes power outlets and Wifi – which is pretty sweet.  It leaves right from inside Union Station in DC, making it super easy to get to. 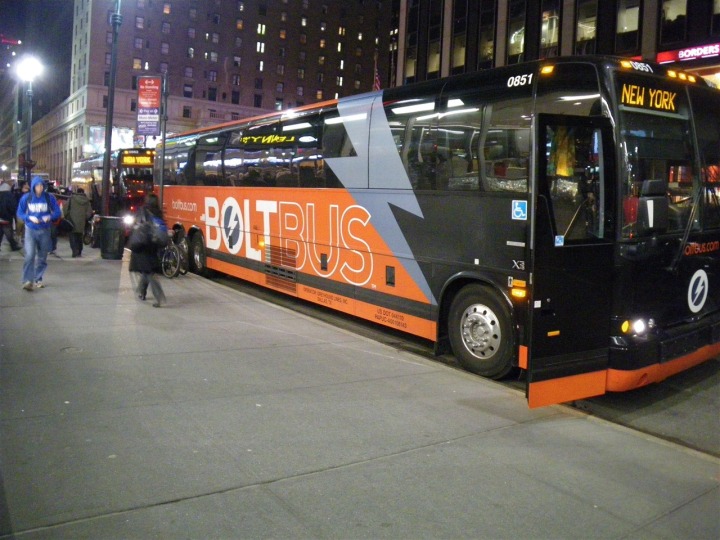 (One little tip if you use Bolt, they use Southwest Airlines style boarding with “A”, “B”, “C” – if you want to sit next to your best bud, you better be in A or B, to do thus, simply join their little e-mail club thingy before booking your ticket.)

We got up to NYC around 7PM Friday evening – just in time to check in the hotel and go out and explore some of the city.  While both the Girl and I have been to NYC before, there’s so much city to go and check out, so there’s always something new to do.

We started with a trip down to Katz’s deli.  This fairly legendary deli you may have seen on The Food Network shows or other food-type programs offers enormous meat filled sandwiches, along with classic Jewish foods such as Matzah Ball Soup (I love Matzah ball soup!) 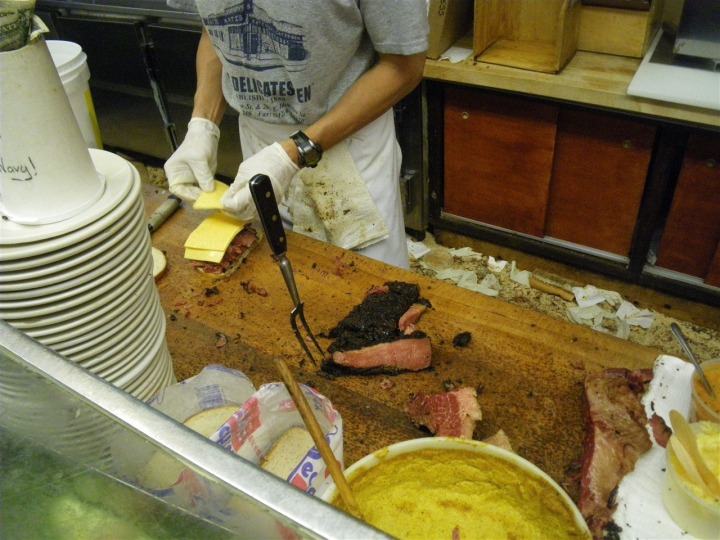 After that we zipped back towards Times Square to hit up a NY landmark cupcake place – Magnolia Bakery.  They have published a few books that The Girl often uses as a baseline for her cupcake creations.  Though, for this journey we were far more interested in devouring cupcakes. 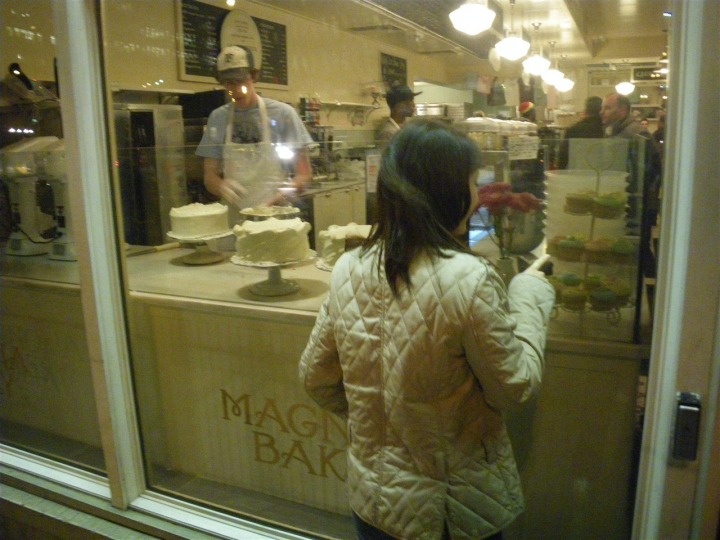 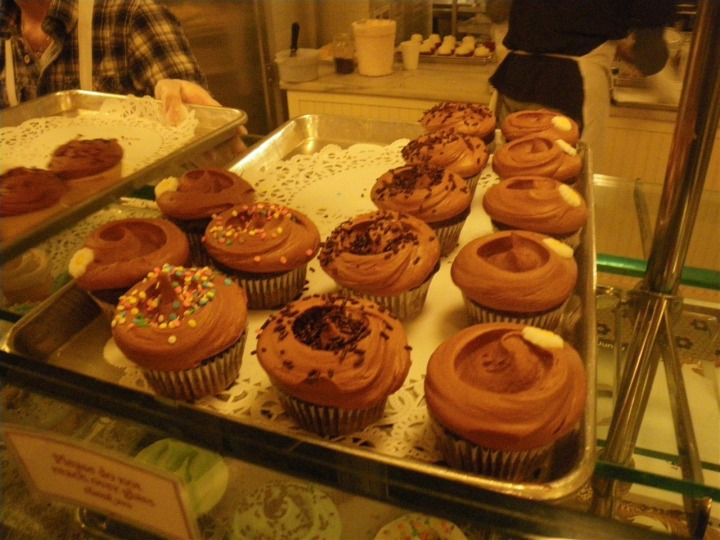 (Sorry all my pictures are kinda crappy this post, I decided to simply take my little point and shoot camera instead of my DSLR camera.  It doesn’t do well in low-light conditions.)

The cupcakes were very very good.  Mmmm!  We may or may not have visited again…and again…and maybe again.

By time all this eating of unhealthy foods had occurred, it was getting pretty late – so we headed back to the hotel in order to be up early and get our workouts in.

We headed out to Central Park to get our run in.  The weather was unbelievable.  Absolutely shorts and t-shirt weather!  Though, the folks below didn’t get that memo…and were probably baking. 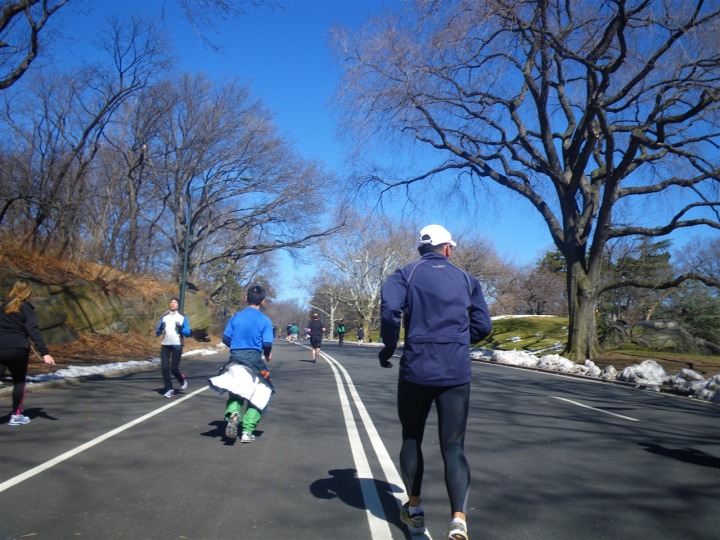 I used to commute weekly from Seattle to New York city (by air, not bus), yet I had never run in Central Park before (mostly cause this was pre-Rainmaker-Running).  Perhaps I just picked the best day ever to do it, but running there is pretty awesome.  It’s just the perfect mix of hills and flats to have some really fun and fast running.

There’s cyclists and runners all going round and round like a big roller skating rink (that’s 5-6 miles long depending on route).  Making the situation even more fun is that both The Girl and I were doing 10 minute interval sets, so we were flying along in the 5’s and 6’s (much to the chagrin of guys that The Girl would fly past and then attempt to catch her).  Sometimes we’d end up ‘racing’ the cyclists up hills (or even the flats).  And I’d win.  I’d like to point out that a runner should NEVER win a bike vs feet on clear roads battle. 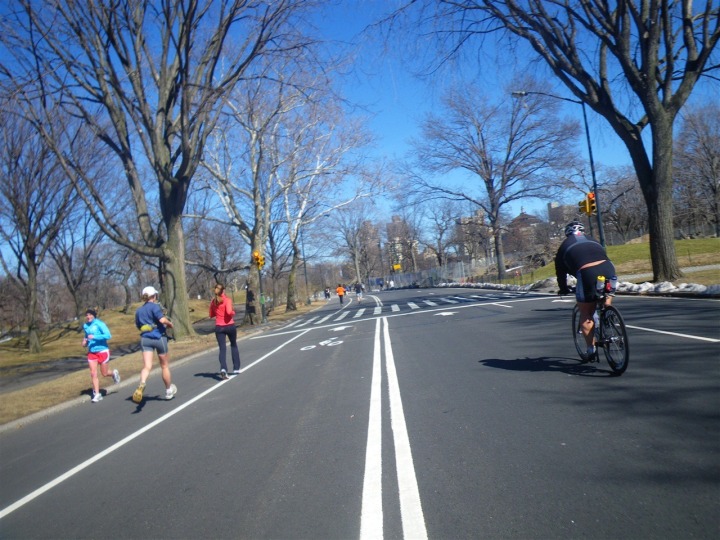 We also beat the horses, but that was kinda unfair given they had to pull a bunch of tourists around: 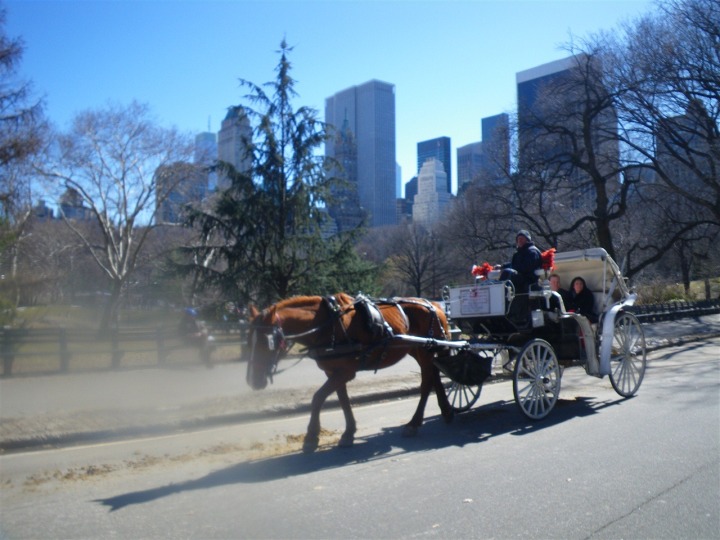 Anyway, about an hour or so later we headed back down Park Ave towards the hotel.  The run was also useful in that I’ll be doing the NYC Triathlon this summer, so it was good to get a feel for the run course (the important parts anyway) – I now know exactly where to really push it and what the terrain looks like. 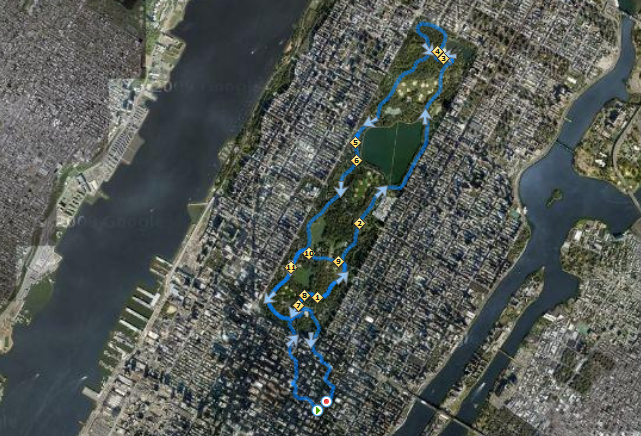 Post-run we got more cupcakes.  Why not, right?

Then we headed up to the top of Rockefeller center for a view of of the city.  The view is awesome up there, plus unlike when on top of the Empire State Building – you can actually see the ESB (the building, not the beer). 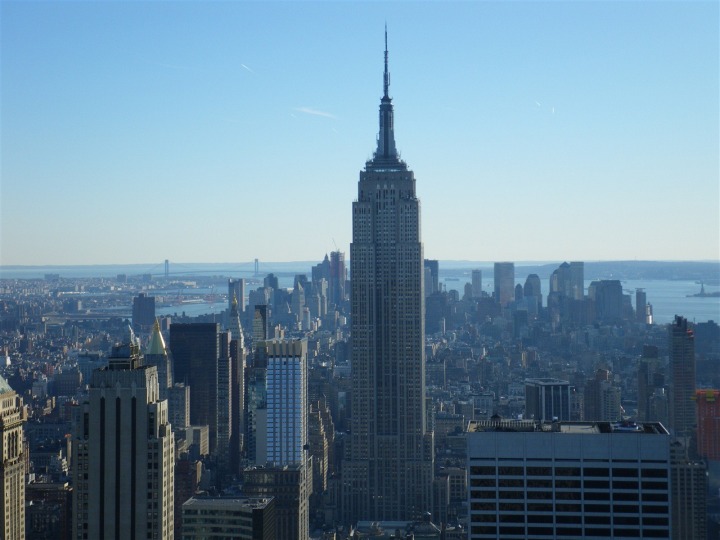 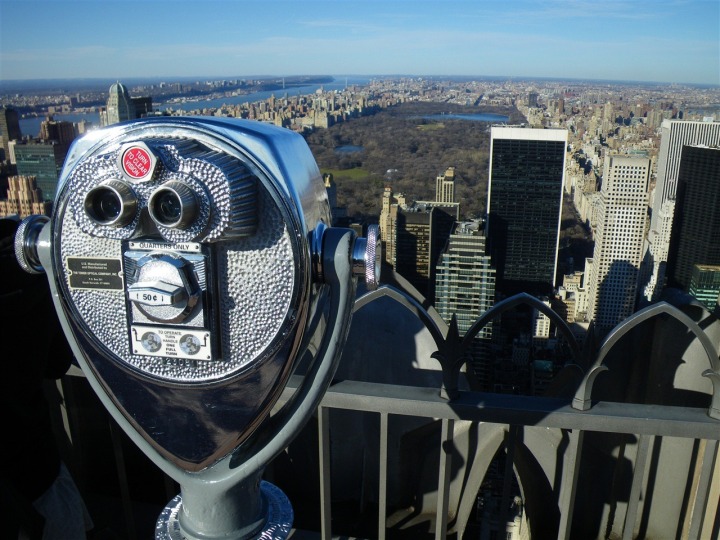 While in the building we checked out the NBC store, didn’t buy anything – but if you wanted a deal on a “Tonight Show with Conan O’Brien’” t-shirt, they’re on clearance. 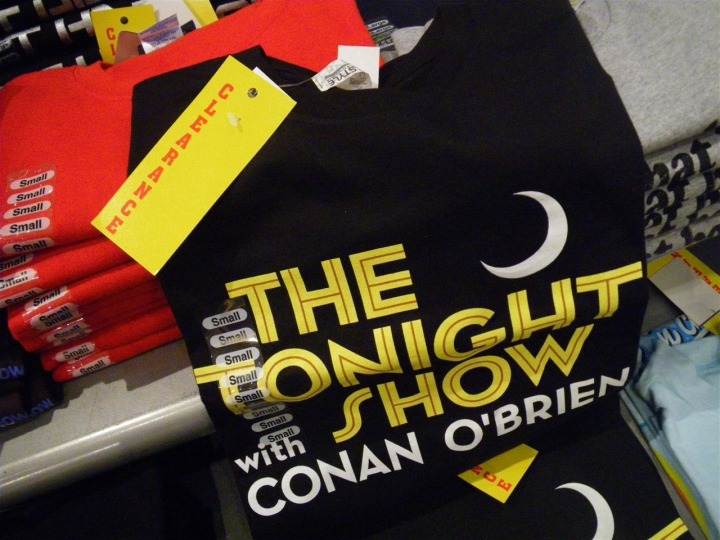 Disappointingly, the Cowbells are not on clearance: 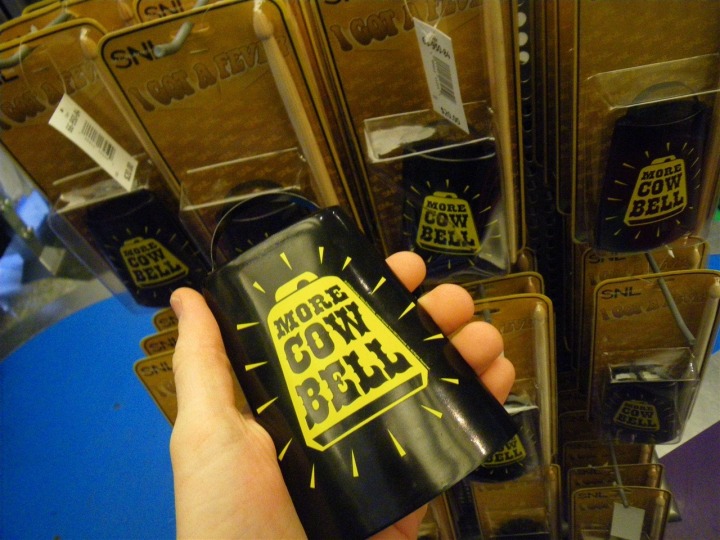 From there we quickly swung by St. Patrick’s on the way back to the hotel – an amazingly massive church where the rich and famous get married or buried (well, the funeral, not where they dig the hole). 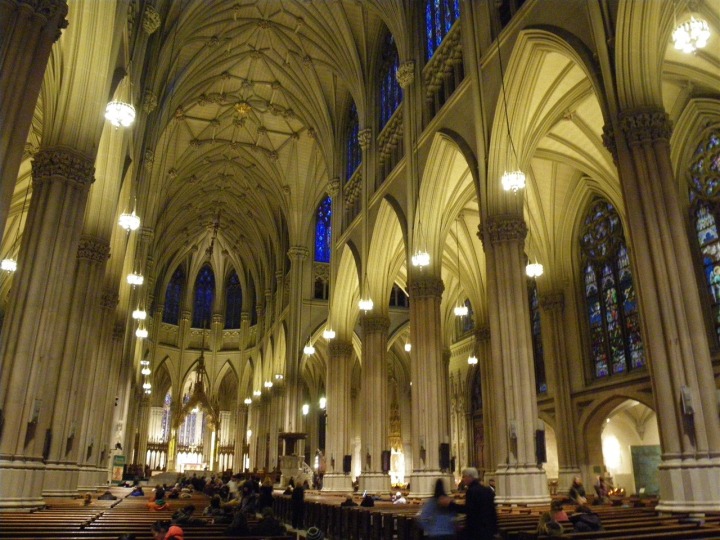 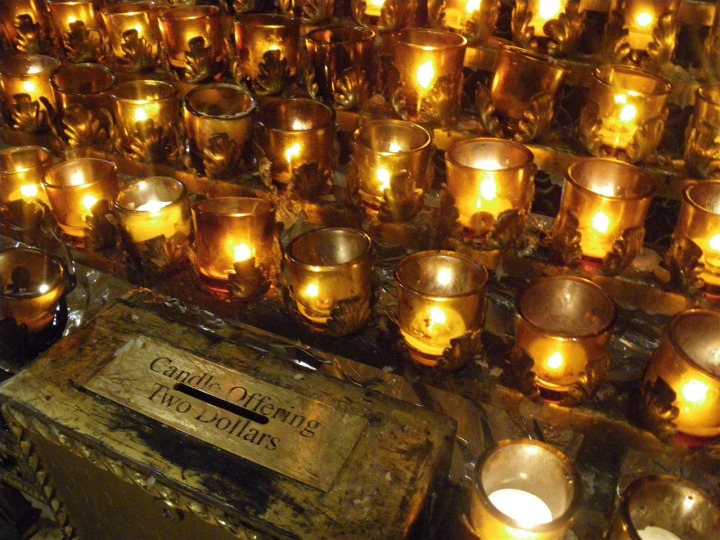 Later Saturday we went to dinner at Café Daniel – which was great, before seeing a comedy show in Times Square.  I don’t have any pictures of either…because it seemed out of place at dinner, and I would have gotten picked on at the comedy show.  So no photo for you!

There may have been more cupcakes after comedy (it’s not my fault the place is open until midnight…so much opportunity!).

What wasn’t comedic though was waking up early to get in our swim before the bus ride home.  While I normally swim on Saturday, we sorta moved it to Sunday morning.  Further lack of comedy was displayed with regards to how much it costs for out of towners to get into the YMCA pool – $30 each.  Doh!  Well, at least we got free towels to use. 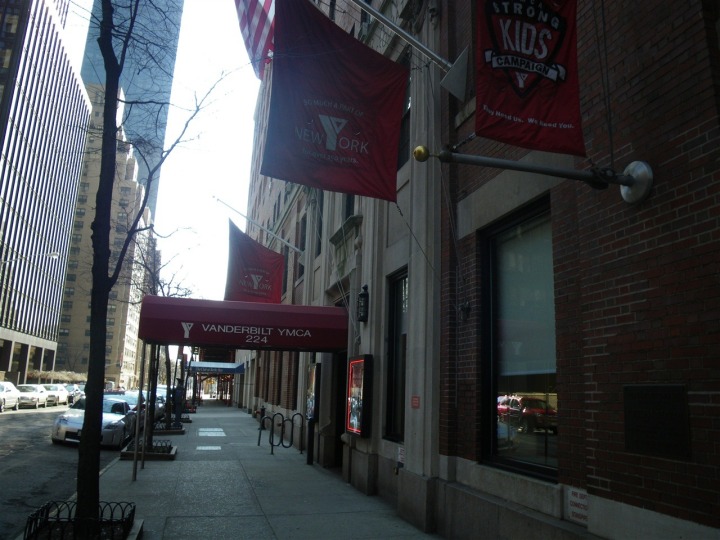 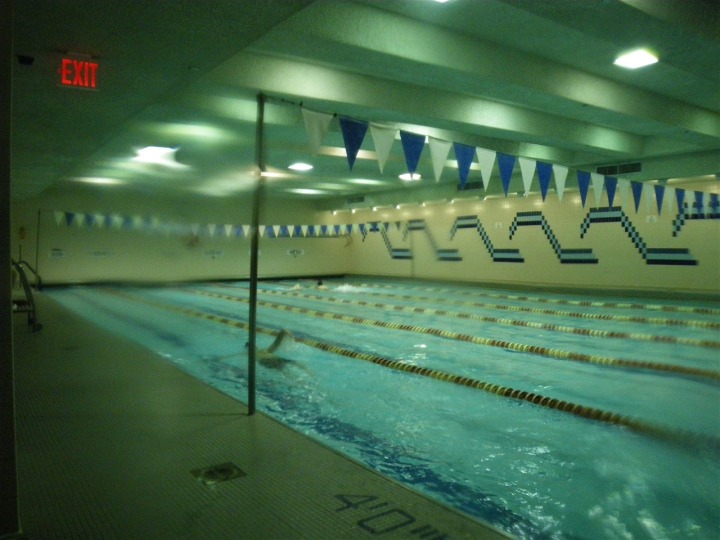 After swim and breakfast it was time to head back down to DC aboard the bus (where I’m writing this now).  Once again – free WiFi and Power, can’t get much better than that! 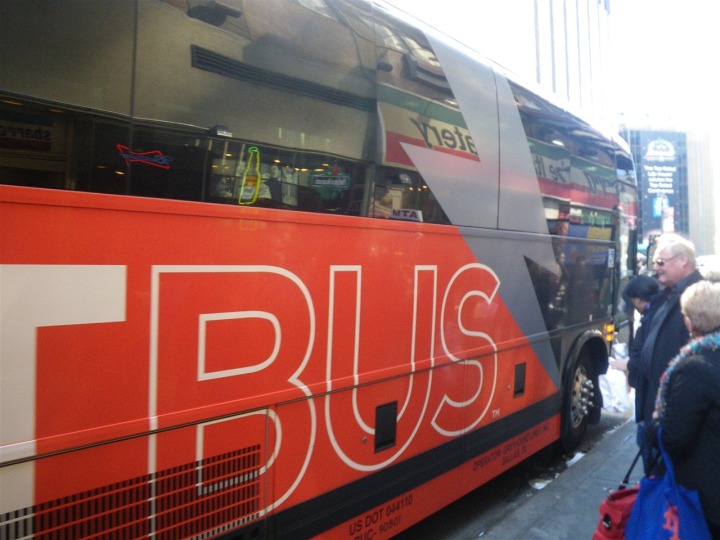