This weekend was quite a whirlwind – and I’m not even talking about the 17” of snow we got.

Friday afternoon I ran away from the DC area in a westerly and then southerly direction towards Snowshoe, WV.  The commercials around here call it ‘Wild and Wonderful West Virginia’, but that seemed a bit too ‘robust’ for my post title, so I shortened it.

While the drive normally takes somewhere in the 5-ish hour range…that wasn’t quite the case with the blizzard-esque thing barreling across the Appalachian mountains and up the East Coast.  Instead…the drive took some 8 hours.  Doh. 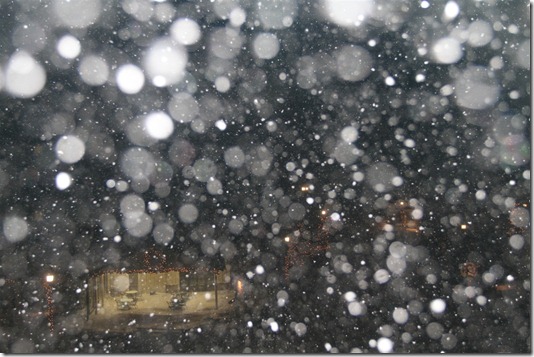 Because I had decided to leave a tiny bit earlier, I traded my trainer ride time for car time.  But – just to be sure I wouldn’t fall off the training boat entirely, my little bike and simple trainer came along for a ride.  So at 10:30PM on Friday night I set out to knock out a 1hr trainer ride. 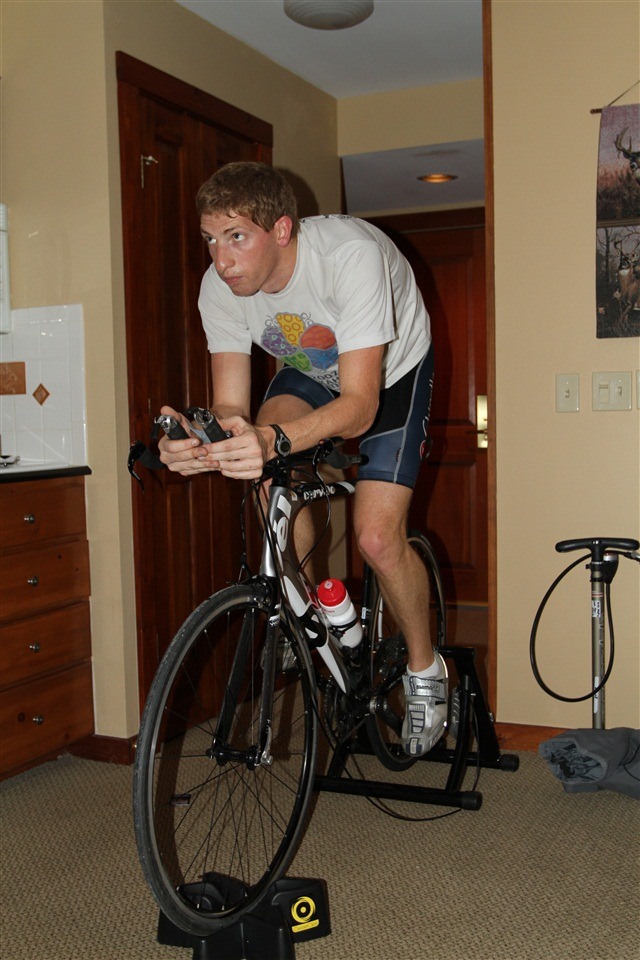 Btw, one little note.  I’m no longer at Sea Level at this point, now instead at 5,000 feet (well, 4,848 feet to be exact).  So my level of suck increased quite a bit (pun intended).  But overall it was nice to be able to loosen up the legs a bit after the long drive.

After a good of sleeping, I awoke to a very deep winter wonderland.  All told probably close to some 2 feet of snow had fallen in the mountains…with it still coming down. 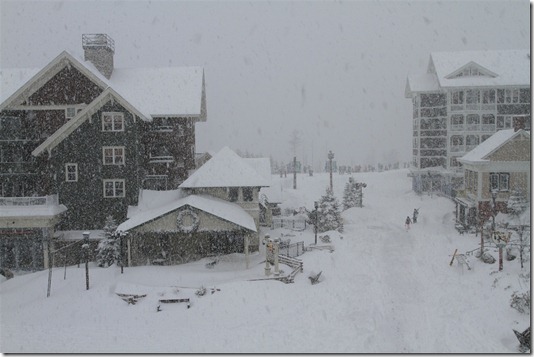 Of course – the first day of skiing each year is filled with one particular moment of excitement: Seeing what’s in your pockets from last year!  Except, in this case, I hadn’t work this particular ski jacket last year at all – so it was actually TWO years ago.  Some amazing historical artifacts in there… 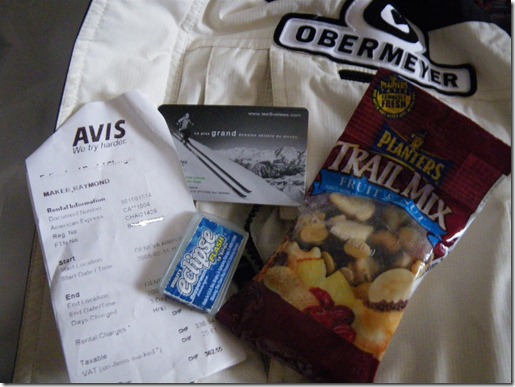 So, what better thing to do than get onto the skiing? 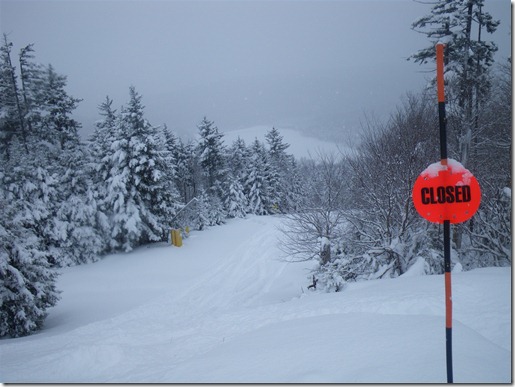 Instead, we’d stay on nice ‘open’ trails.  That’s me below in the white jacket. 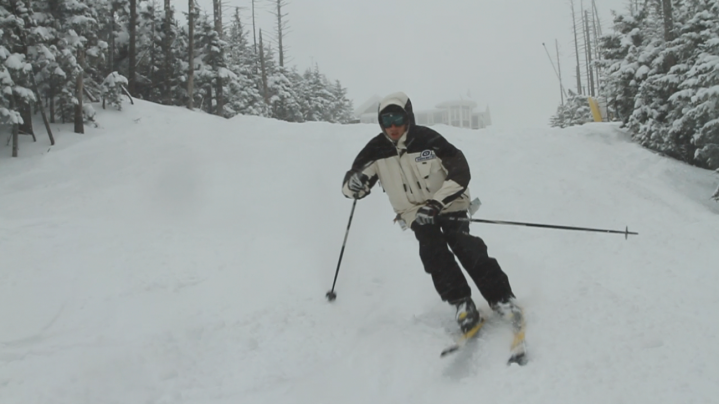 I was skiing with two friends, Bruce and Drew: 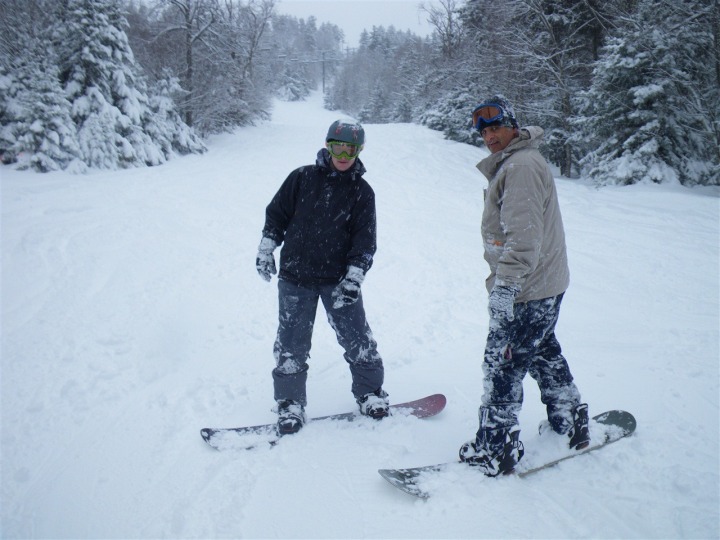 I tried not to hold it against them that they were snowboarders.  I mean, it’s not entirely there fault. 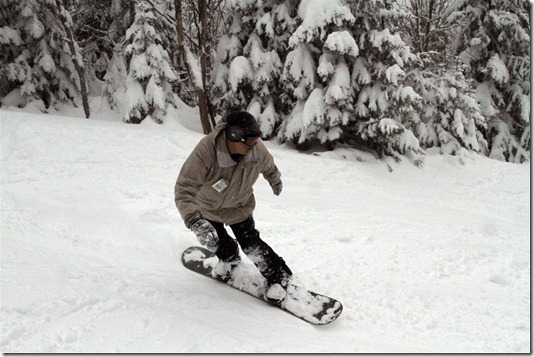 At one point I stumbled upon a run called “Slaymaker”.  It’s kinda like Rain Maker…only cooler sounding. :-/  Though, it does lose points for being a blue run.  Really – with a name like that it should be at least a single diamond run – if not double diamond.  I can’t be associated with something just a few moguls away from being a green run. 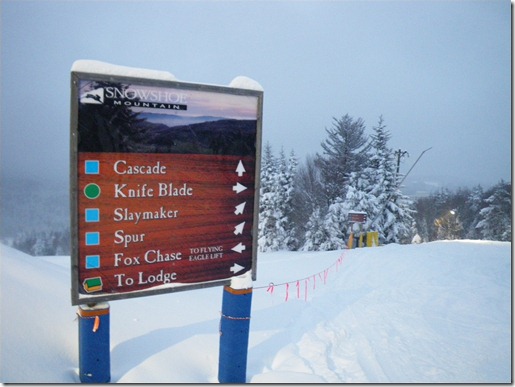 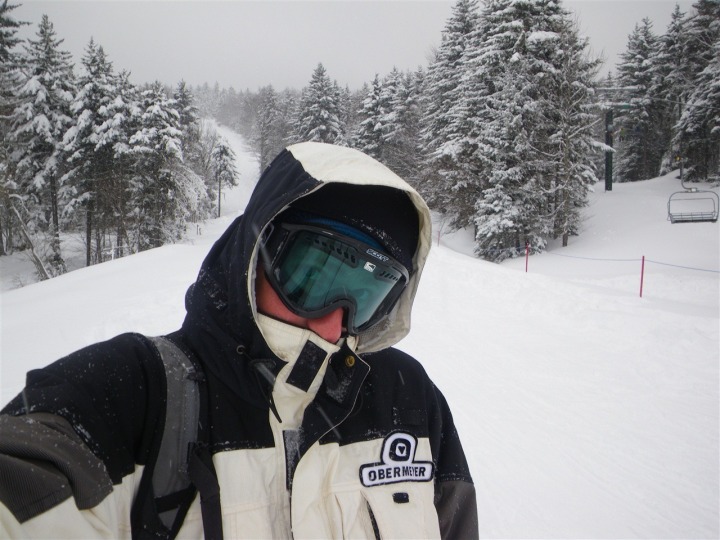 After a morning of skiing we took a quick bus to a different part of the resort that was across the road.  This older section was actually a bit nicer in that it was quieter.  It was a bit more populated with locals (West Virginians), which added some interesting cultural moments. 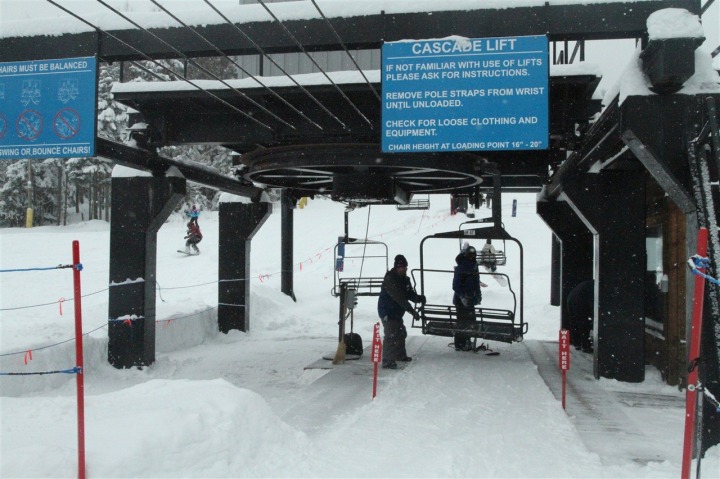 Soon we were skiing into the lights, as parts of the area are lit up at night for night skiing: 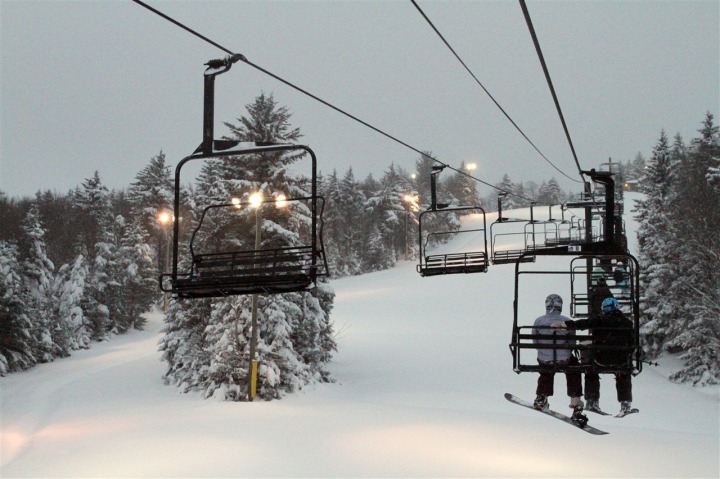 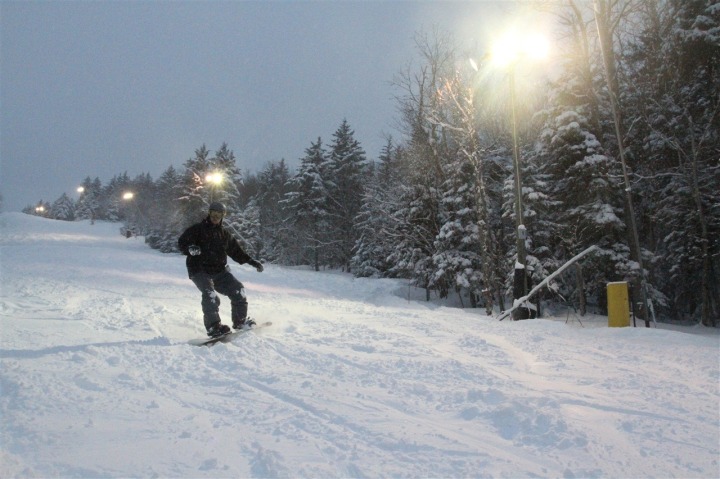 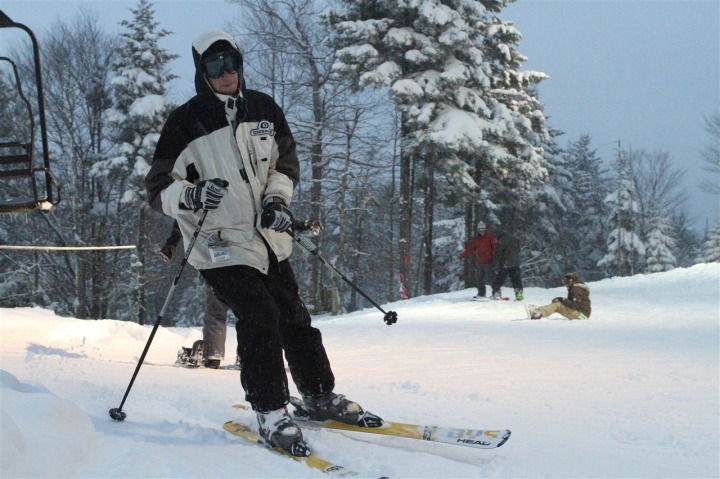 I brought the Edge 500 along for fun, just to see how it record while skiing – and because it’s always fun to look at where you went afterwards.  One neat data field is the total descent, which is shown below at 11,231 – though I’d finish the day a touch over 14,000 ft. 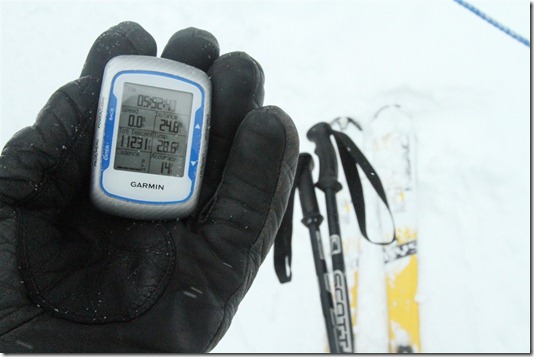 After about 7 or so hours of skiing I had made this little bit of artwork with the GPS tracks: 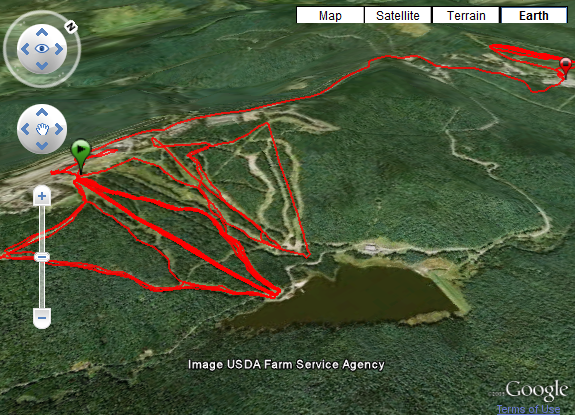 From there, it was immediately into the tiny fitness room to knock out a 50 minute run.  Note, what you see below is the entirety of the fitness room.  I managed to catch the last 90 seconds of the Kona broadcast…and unfortunately, my DVR here in DC didn’t catch any of it, as it was busy recording our local NBC affiliates ever-so-important “Stormcast 2009!”.  Sad panda. 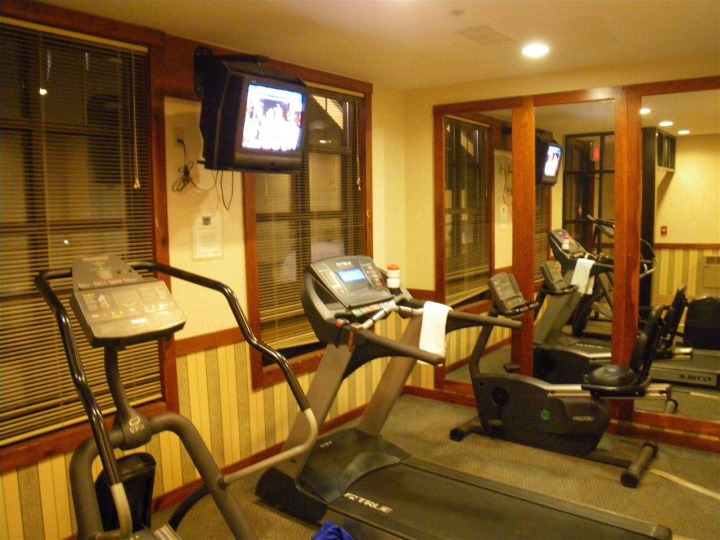 The nice part is that right outside those windows above…is the outside hot tub…below.  So obviously, I went straight there. 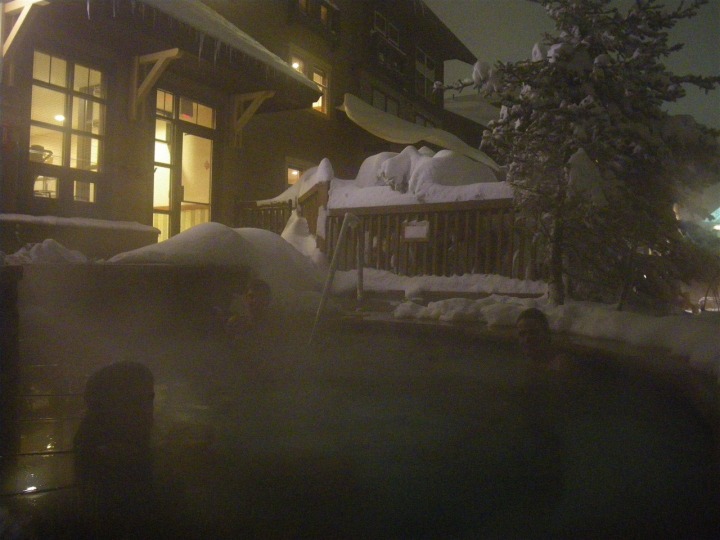 Sunday was filled with the long (though just barely shorter) drive home.  Along the way I saw plenty of wayward vehicles – some way the heck out there stuck in the middle of fields or farmland.  And some that clearly decided off-roading seemed like a better alternative.  Though in all cases…it was clearly not.

But the snow did make for a pretty drive home… 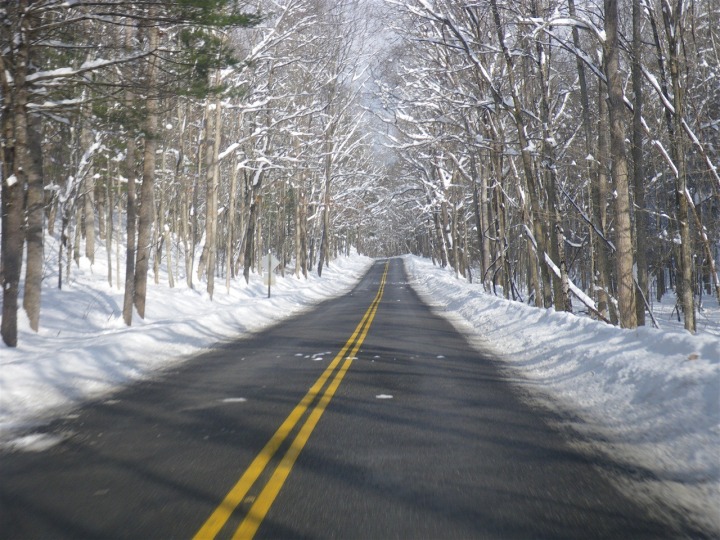 And now, I’m back in DC…for a few more hours anyways..