Running from the police (Part II)

I was downtown (DC) today for a series of meetings and related stuffs, which is somewhat unusual in that I generally work from home.  I had finished up my day and was heading out of a building and made it about 10-15 feet when a dude came around the corner in what some might classify as a ‘sprint’.

Now, there are certain outfits designed for running, and those that are clearly not.  This particular gentleman was wearing urban-street-fashionable clothing clearly not designed for running, which is why it caught my attention.  Further, while I often see runners around downtown – I don’t often see them in a dead sprint looking over their shoulder.

A moment later I hear a siren come around a corner, and I see what appears to be a police officer in ‘full pursuit’…running.  Now, I say it with quotations, as I wouldn’t really classify it as a full blown sprint per se.  The siren was from a police car trying to follow along on the street while the officer ran down the overly wide sidewalk.

But back to the officer running…

Now while I haven’t see Mall Cop (the movie), the guy running kinda reminded me of the Mall Cop guy.  Though the police officer was a fair bit slimmer. 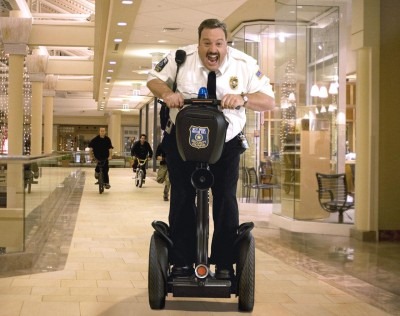 So, as we started this story, the ‘suspect’ goes ‘running’ by.  At probably around a 7:30/mile pace.  Now, regardless of what pace you may go out and run a nice long run at – I think it’s universally accepted that for a sprint (of say a few hundred yards), a 7:30/mile pace probably isn’t the most ideal speed to be going at.  I’ll routinely do 30-32s 200m sprints (or about a 4:00/mile) after a long set on the track.  I’m sure if I was running a flat balls to the wall pace without having run 10-15 miles previous to that, I could easily hold it for a while.  Now add in the whole ‘running for freedom’ piece, and you’d think this guy would be throwing down…urban style.

But that was not the case.

Because the police officer in hot pursuit was holding on for dear life running a 8:00/mile pace.  He ran on by looking like he was in slow motion, while the suspect slowly built up ground.  And the suspect knew this, so he merely just kept a solid lead – much like you might do on any given road race.  No reason to run too hard, just need to maintain the lead.

However, the suspect neglected to consider the ramifications of running towards the street.  The very same street where aforementioned police car was cruising along with sirens.  For whatever reason, when the suspect basically ran up next to the cop car, he surrendered.  Had he had slightly more intelligence, given the heavy afternoon traffic and one-way streets, he easily could have gone about his merry way with only a few hundred more yards of running. Obviously, since he had likely done something illegal, he probably lacked said intelligence and thus the poor decision making skillz on this part. 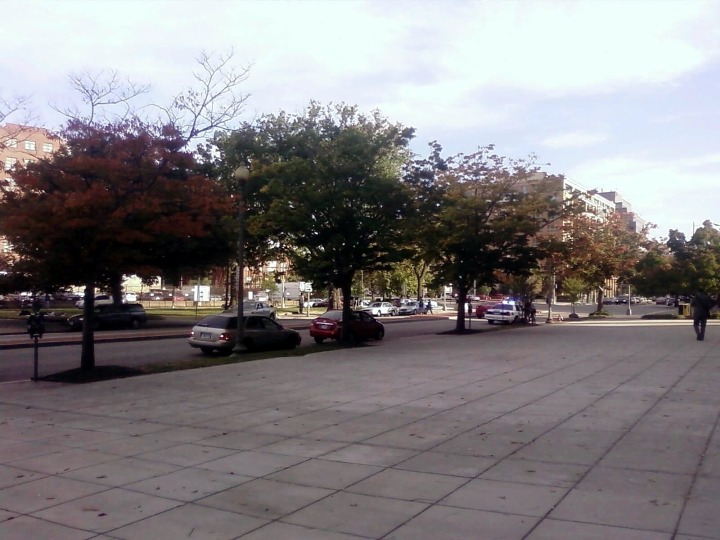 A few seconds later (or approximately an eternity) the running police officer caught up to the suspect, took a few seconds to compose himself (read: breath again) and then went about the business of arresting the guy.  I caught the arrest piece on my little cell phone camera above.  That’s about as good as the pics gets really.

Well, if you have any running abilities, you can probably outrun at least one member of the DC police force in a dead sprint.  Which is not to say you can out run all DC city employees.  For example, the top dog himself – Mayor Fenty – is a VERY quick runner and triathlete.  He generally finishes his 10K times in the upper 30’s, and this Olympic Triathlon times are usually in the 2:15-2:20 ballpark.  I have no doubt that he could throw down a screaming sprint pace, and probably could have closed the gap with the suspect in a matter of 2-3 seconds tops.

Oh, in case you’re wondering why this is titled “Part II”, see my previous post on running from the police…