I generally appreciate little random presents.  Most little presents are surprises, and most of the time, they are good.

So this weekend I was excited to find a little present in my mailbox after finishing my rather long workout. 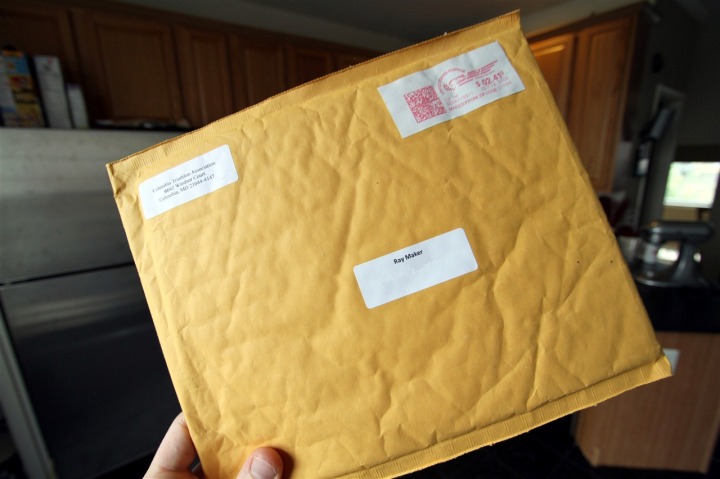 After a bit of wrestling (it was well packed), I found inside this goodness: 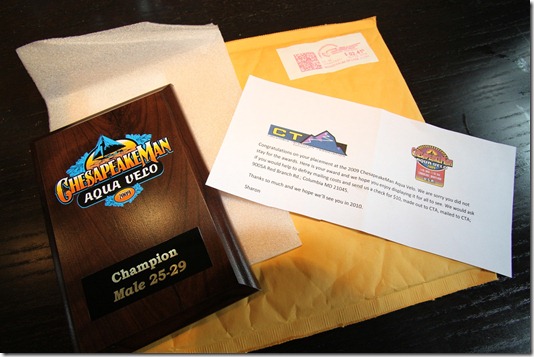 See, a few weeks back when I raced in the ChesapeakeMan Aqua-Velo (2.4M Swim, 112M bike ride) I didn’t stay around for the awards ceremony.  That’s because the ceremony was the next morning (typical for an Iron-distance race), and I lived a few hours away and wanted to get home to enjoy the rest of the weekend (and see The Girl!).

So I simply drove on home.  I noticed on their site that they’d send awards out to you if you covered shipping and handling.  Seemed like a fair deal.  For the most part I had forgot about it, as I wasn’t exactly sure if they gave out awards for the individual age group within the Aqua Velo.  Turns out, they do: 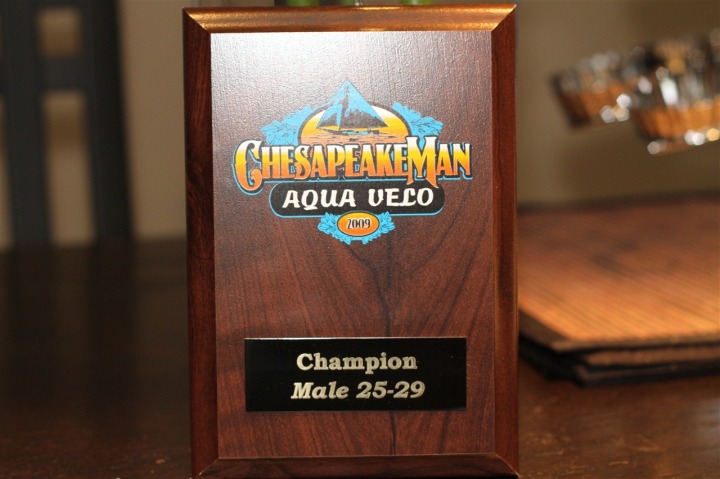 Sweet, good deal!  Thus far, as it stands my season started with an AG win, and my last race thus far has been an AG win.  Solid.

Tonight I was at the pool for a swim.  Just about 3,300ish yards of back and forth goodness.  I had knocked out the first 2,000 or so yards of warm-up, drills and balance stuffs.  Then I went onto the ‘core’ of my workout, which was 100 repeats alternating with 100 of fist swimming (joyous activity) and 100 of open (no fist).  Things were actually going pretty well.

A bit later I was on my 8th 100y set I heard some lifeguard whistles.

Whistles are never a good thing.  Never ever.

I kept on going, but watched the lanes next to me for motion (or commotion as it may be).  My rule is that mid-set I generally ignore the whistles and instead watch people underwater.  If people start leaving lanes, then I’ll pop-up and see what the circus is about.

Unfortunately, the pool started to empty out pretty quickly.  I knew what this had meant.

A little kid had decided to leave little presents.  Which in turn meant my swim workout got the ax.  Luckily, I only had 6 more 100’s to do, so it wasn’t a complete loss per se.  Plus, it’s been a few months since I’ve been kicked out of the pool for present cleaning – so I was due for another pool ejection.