Aloha – from the Hawaiian islands!

After my race on Sunday, I had to quickly pack up everything and get all my stuff ready for a work trip to Hawaii.  I took off early Monday morning, and after 12 hours of flying time, I descended down into Honolulu.  The good news is I got a CRAPLOAD done during those 12 hours.  Aside from lots of work stuff, I also knocked out a ton of drafts for really solid upcoming posts (all done, yah!) – including:

One cool thing that some United pilots do is to thank some of their more frequent customers.  Upon descent the flight attendant handed me this card from the pilot.

“Mr. Maker – Thank you for being one of our 100K Flyers.  We DO appreciate your business! –Cap. Shawn Buckley”

The 100K refers to how many miles I flew per year with United – 100,000+.  Pretty cool.  Sometimes it’s the little things that make a difference. 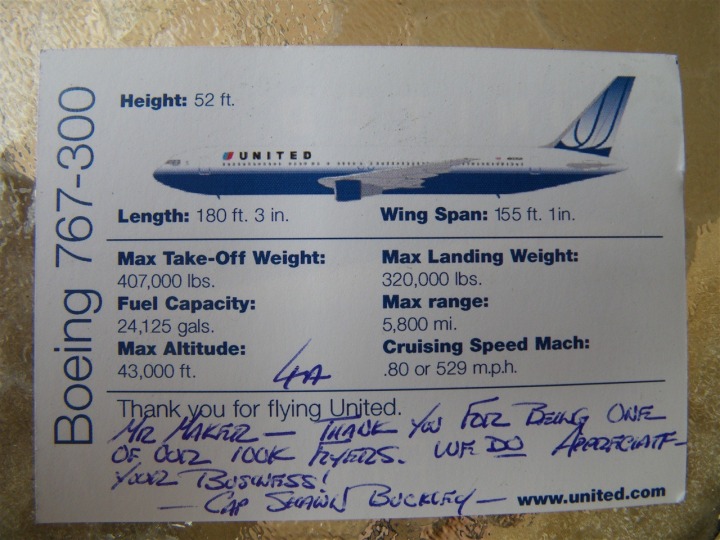 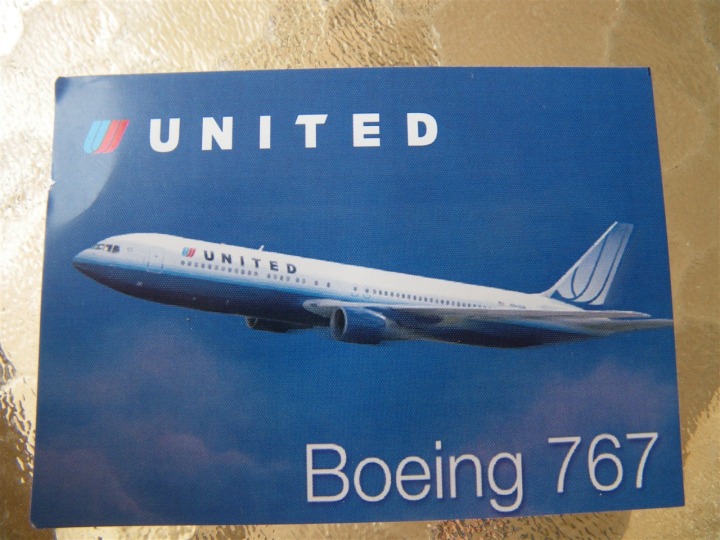 Now, unlike most leisure trips to Hawaii – being business this one is short.  Only 48 hours. 🙁  But, I’ve got a busy training schedule to help fill what little off-time I have from work.  And to make matters just a bit more complicated, I leave Wednesday mid-afternoon on a redeye flight to my next location.  But before I leave, here’s what I’ve been up to.

Before I left, I e-mailed Maggs – who lives and trains here in Honolulu to get some ideas for places to swim/bike/run.  She e-mailed back a plethora of options, one of which included joining her for a coached open water swim session with about 20 or so other triathletes.  So early Tuesday morning around 6:30AM I headed out to the beach, just a short jaunt from my hotel. 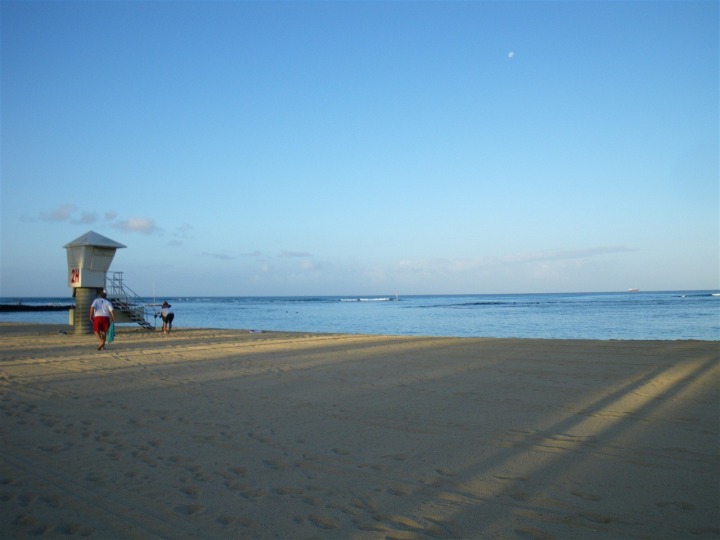 After a short bit their coach explained to me the rough plan – which included a warm-up, then a bunch of intervals – probably 150-200 yards in length each, and I think we did about 8-10 of them.  I was also working through all of the items to focus on from my coach though.

One of the first things I noticed was just how ridiculously clear the water was.  For most of the workout I either stayed on Maggs or someone else’s feet (read: someone who knew what they were doing).  And for at least the first 5-10 minutes I was completely engrossed by the fact that I could ACTUALLY SEE THIER FEET, as opposed to just seeing little bubbles like in typical less-clear water.  Meanwhile I was apparently missing all sorts of turtles below.

So, I stopped watching feet and instead started watching fish and looking for turtles.  A short bit later I swam just over the top of one a few feet below me.  Pretty cool!

After about 45 minutes I had to bail a bit early to go to work, but I took this photo looking back and you can see the group in the distance swimming the next set. 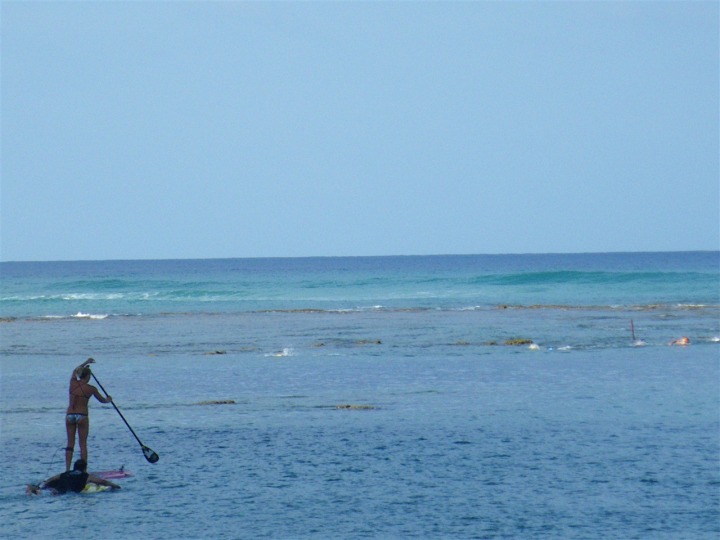 Oh, and here’s me.  I had a blast swimming with them.  Good fast folks to swim with, and you simply can’t beat an early morning swim with a bunch of EXTREMELY friendly people…in crystal clear water. 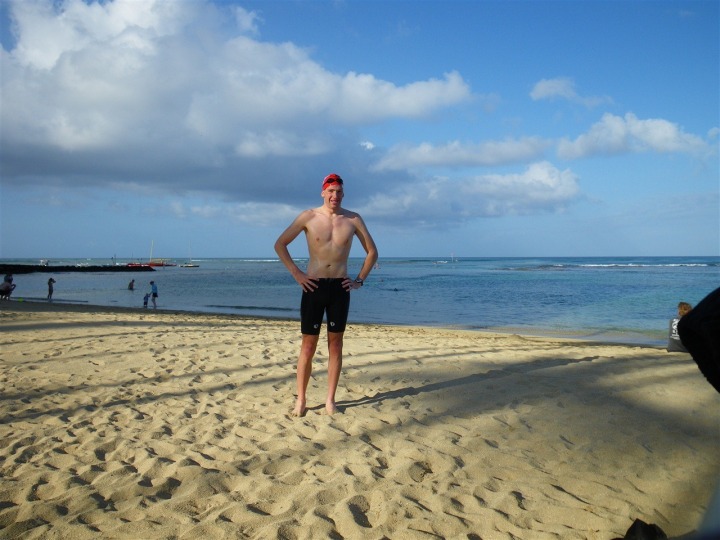 I also tossed my little Forerunner 305 in my swim cap for the fun of it too (here’s how).  Because I knew the swim would be longer than the 30 minute IPX waterproofing limit the 305 has, I also wanted to use a Ziploc bag.  But I forgot one. 🙁  So instead I tore apart a hotel ice-bucket bag and accomplished the same thing.  I was rather proud of myself. 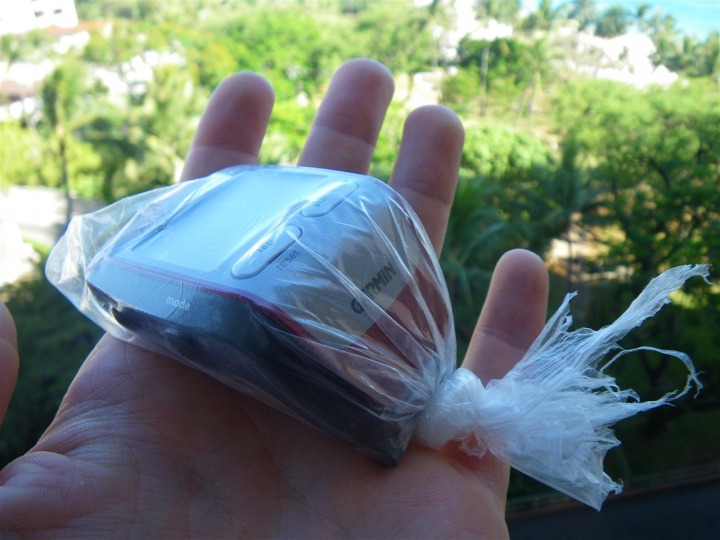 And it was well worth that little effort – because the route is spectacular when viewed from above: 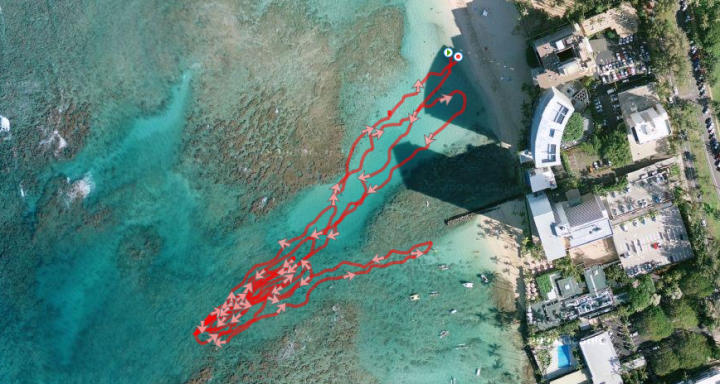 And with a larger view of the beach… 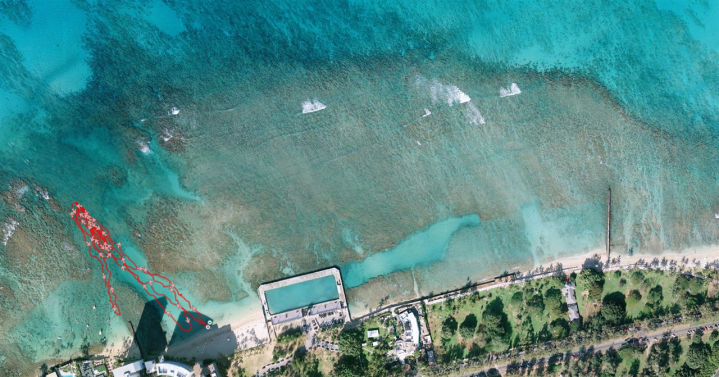 So that was Tuesday…let’s move onto this morning  – Wednesday (note, we’re 6 hours behind EST).

Maggs had also recommended that I could rent a bike from Boca Hawaii – a local tri shop.  So I picked it up Tuesday night in order to be able to ride early this morning.  Since my body is completely time-zone-jacked at this point, I was up again at 5AMish, and after lounging around catching up on e-mail for a bit, I finally headed out – though still in the 6-o’clock hour.

First stop was one of the numerous ABC Stores to pickup some drinks for my ride.  These are touristy convenience stores that are prolific here in Hawaii (like literally every 100-200 feet). 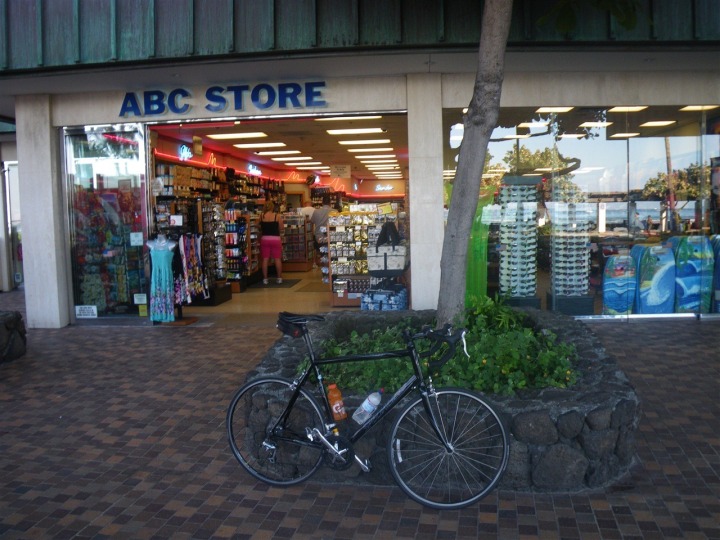 After that I pretty much left Waikiki behind and went towards quieter areas along the coast, essentially starting to circle the island. 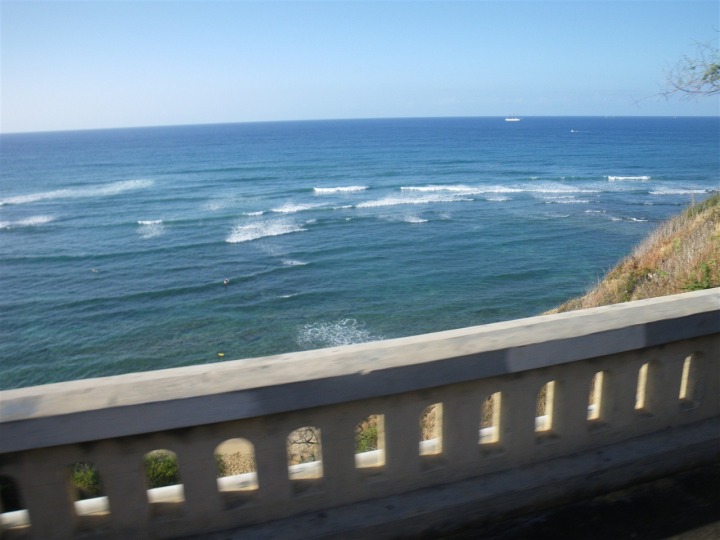 A short bit later I came upon a group of three triathletes who were curiously pace-lining it (drafting) in aero. 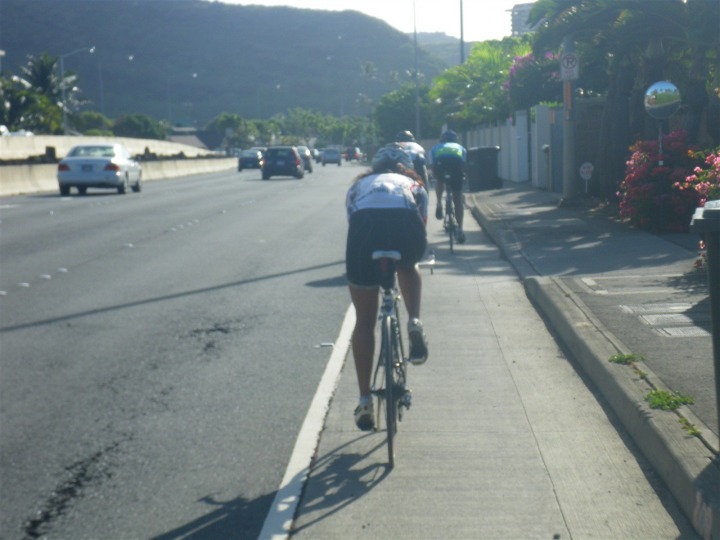 I say curiously because I’m not entirely sure why you’d want to practice drafting on a tri-bike in aero.  Drafting means you work less – so in reality they weren’t really getting the workout they thought they were getting as typically drafting cuts the work effort by between 25-40%. Oh, and they weren’t actually just ‘riding together’, nope – the front two were within inches of each others wheels.  The back girl though was holding her own much better. 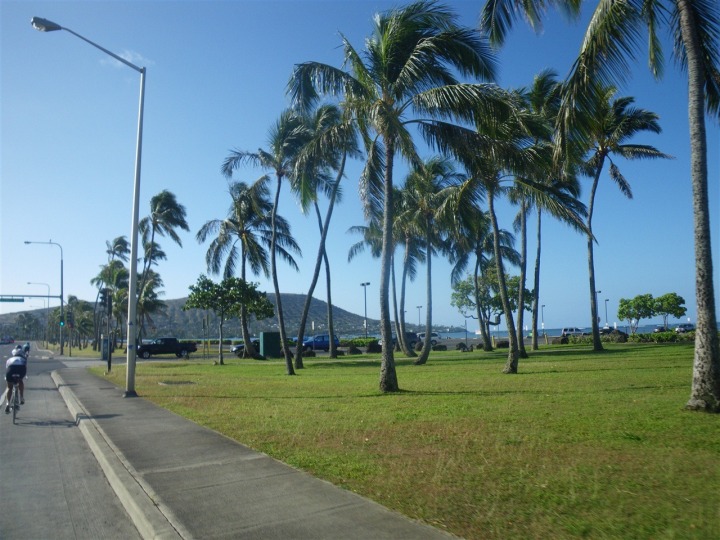 Anyways, soon I left them behind and continued on my little adventure.  It was about this point (30 minutes into my ride) that my workout really began.  My coach, Coach Alan, had prescribed 40 minutes of Fartlek action today.  This is where you do semi-random short burst speed intervals to various points in the distance, in my case between 30 seconds and 3 minutes.  My first point ended up being a big-ass hill.  Doh.  But up I went.

Going down I was rewarded with quite a nice view. 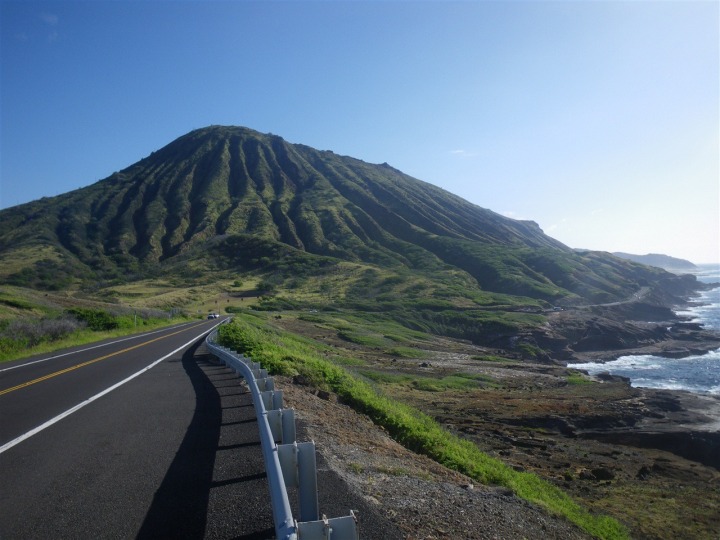 I then continued on past some park with a blowhole (that’s what the sign said!). 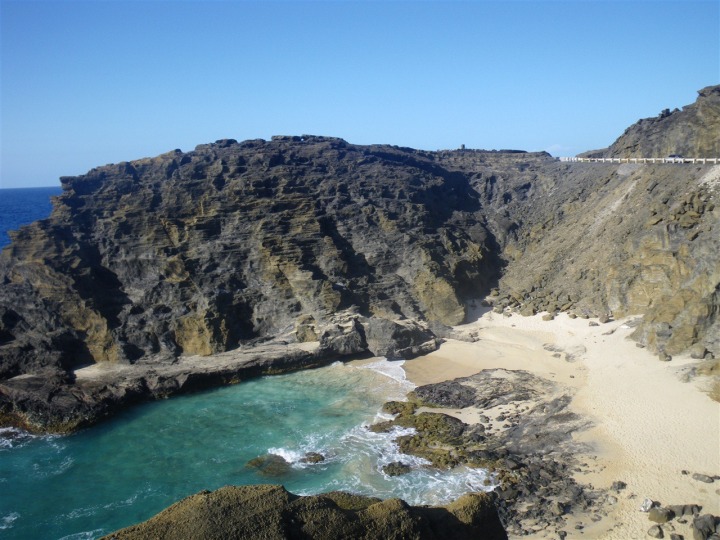 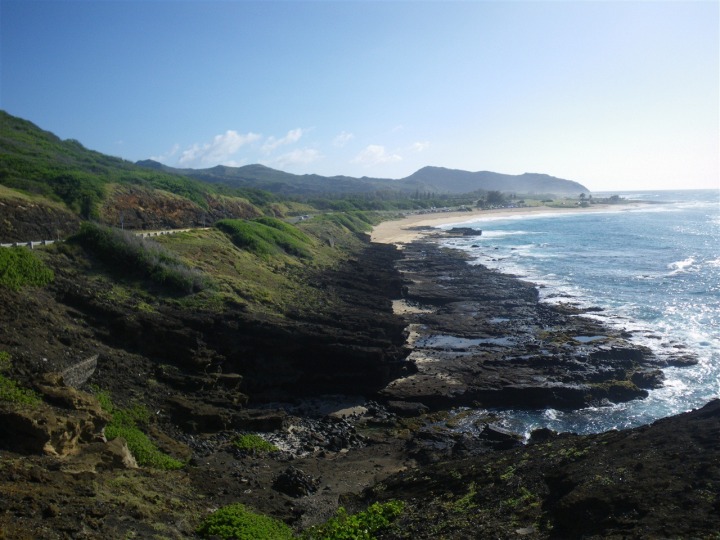 And finally a bit further to Sandy Beach Park.  Don’t worry, I don’t know where these places are either, I just rode to them and took photos of them. 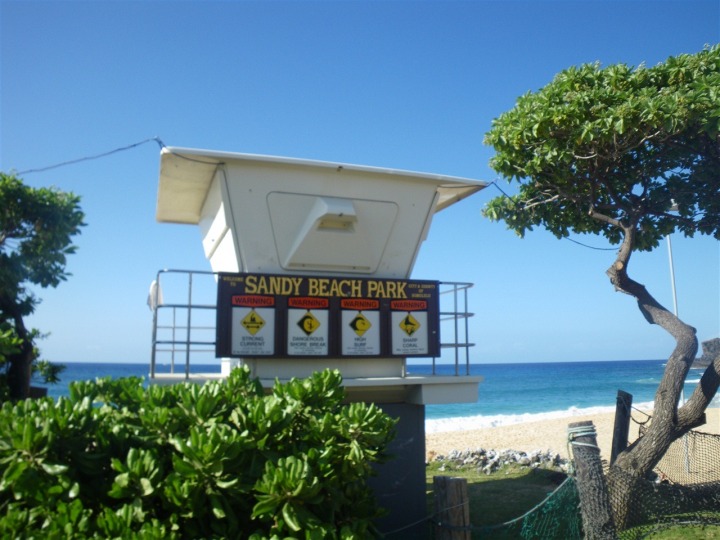 After finishing an interval I quickly jumped over to the beach and set my camera on a rock and took a quick photo before heading back. 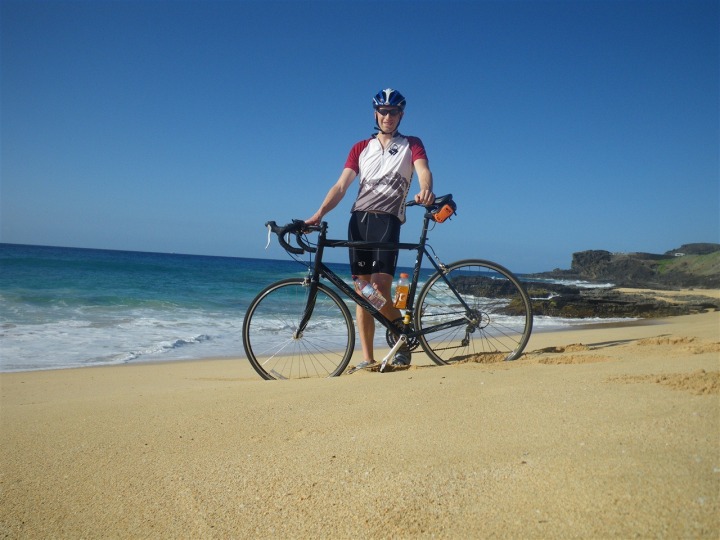 The road here is really rather pretty and a great place to ride, a bit twisty and rolling hills, but that’s what makes it so enjoyable.  None of this ‘go straight on a flat road for 10 miles’ stuff. 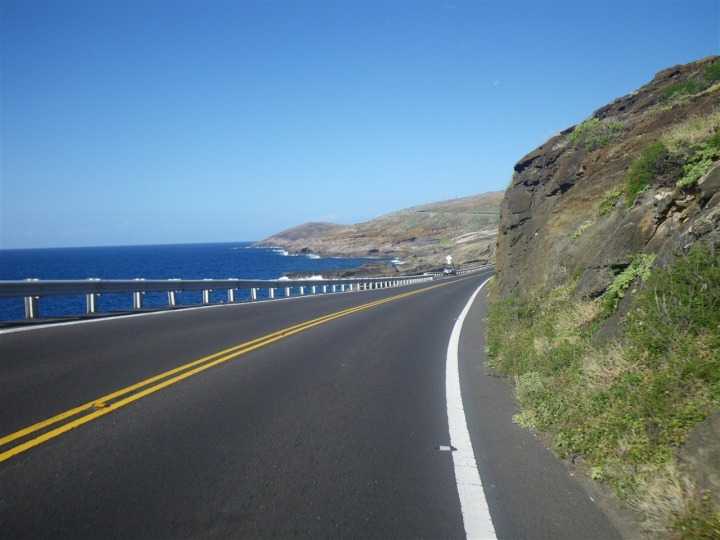 I took one last quick detour through Hanauma Bay Park to snap a photo before continuing on. 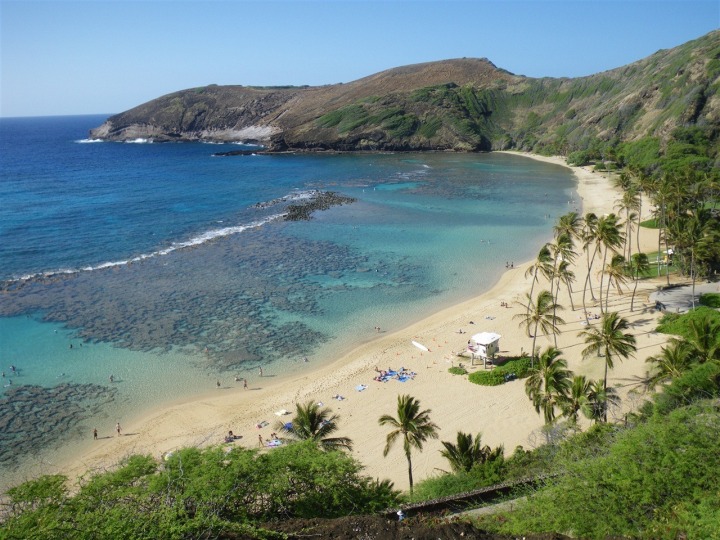 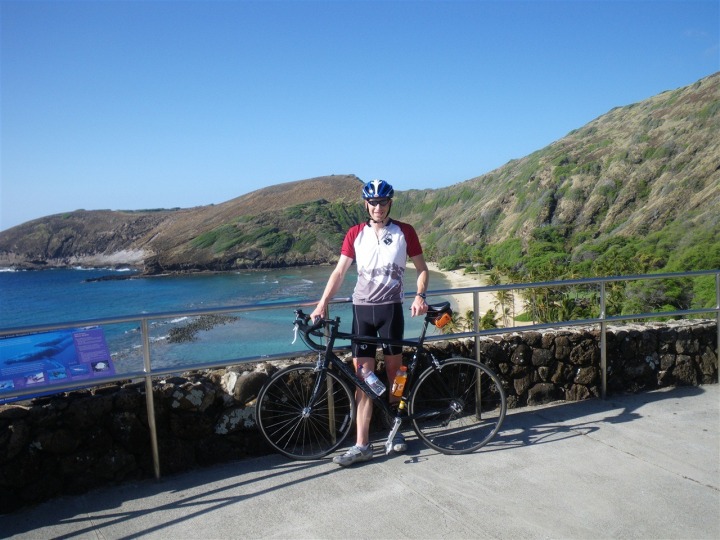 Seriously folks, based on all the places I’ve gone – this is the best place on earth to train.  And I’m not saying that because of all the touristy thing you can do here (in fact, I haven’t done a single touristy thing here yet, just work and workouts – no beach or pool time), but rather just because the workout options are so awesome and the people are so friendly.  Plus, there seems to be a pretty solid tri/running crowd here.

Before wrapping up my 40 minutes of Fartlek action, I saw one last hill in the distance.  I decided this would be my last interval. 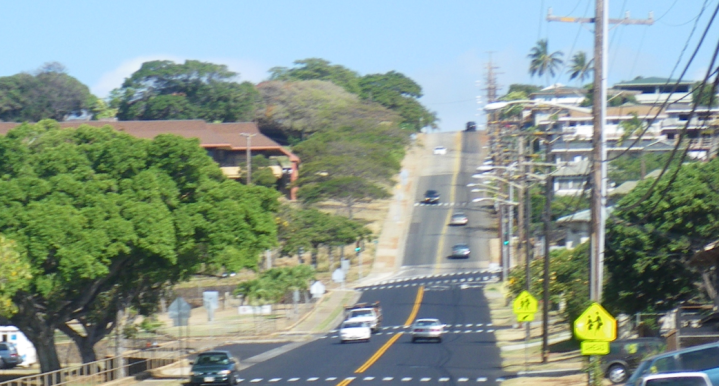 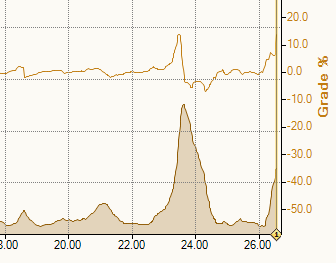 So I attacked it with all I had.  By the time I got to the top, my heart rate was 184 – the highest I’ve EVER seen it on the bike before.  I don’t even have a HR zone for that high.  And I felt like this: 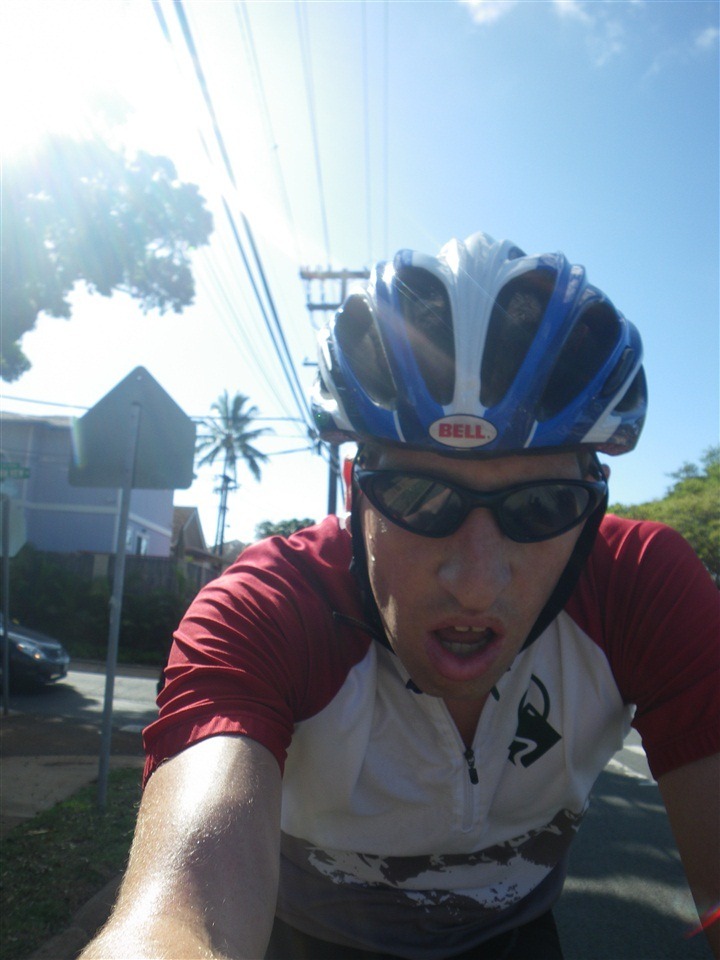 From there, I wandered down into Waikiki for a nice 10-15 minute cool down ride back to my hotel. 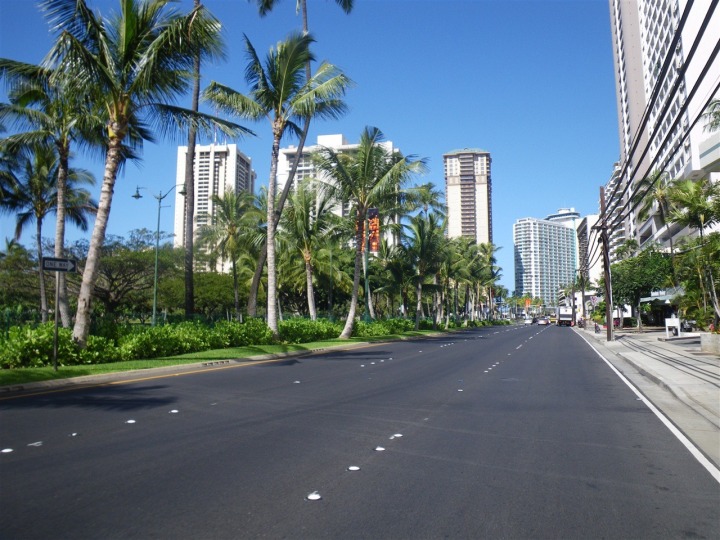 All in all – a very solid two days of training in paradise.  And while I didn’t get to enjoy it in the typical sense of a tourist, I did get to do a lot of neat things most tourists don’t get to do.  Oh, and I did very briefly walk out the back of the hotel and snap this photo of the beach…before going back in to finish packing up. 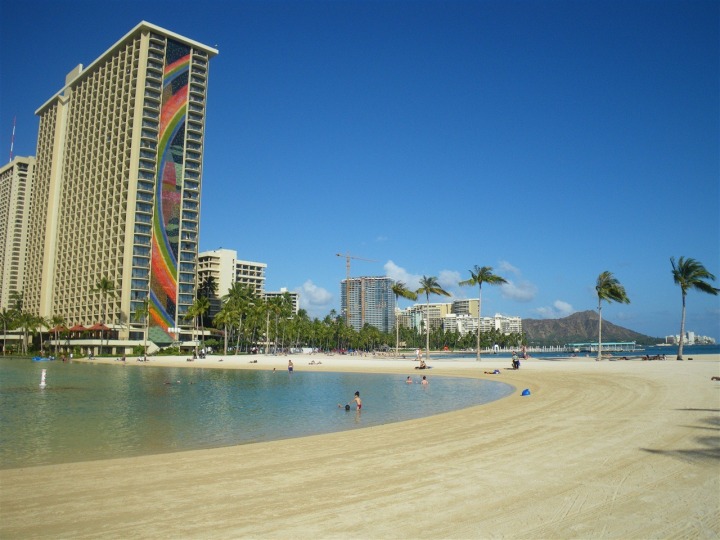 And with that – I biked to work today (it’s bike to work week after all), and now I’m sitting at the airport ready to head off to another ‘exciting’ location.  See ya!