It will be my attempt to keep this somewhat short. However, usually I fail in that endeavor. Actually, it will be more photogenic than usual, with less text.

A good friend offered to both take photos…and fly me up to Philly in his airplane. How could I refuse either of those offers? Midday Saturday I drove a short distance from my house to the nearby airport, where we began the fun of making Mr. Bike fit into Mr. Airplane. He had done a dry run a few weeks ago, so we knew it would fit – just a matter of putting the puzzle together. Once we removed the seat post, the puzzle was complete. 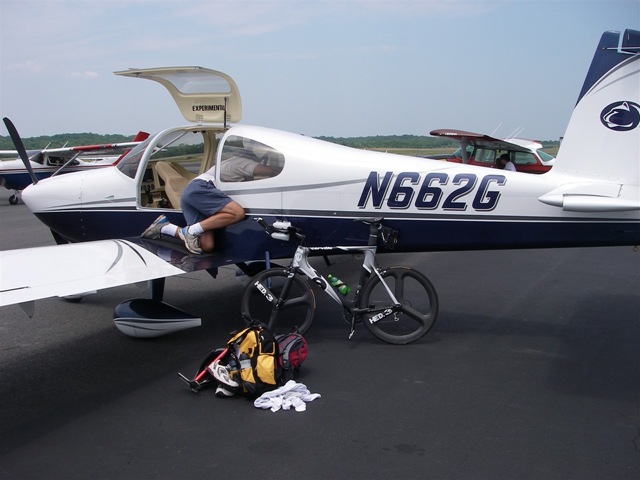 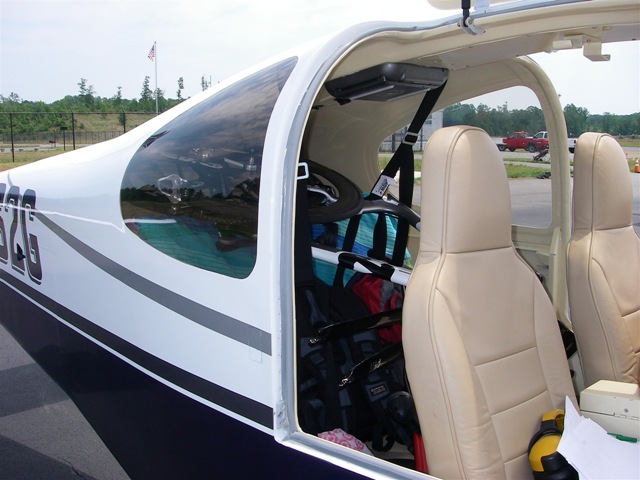 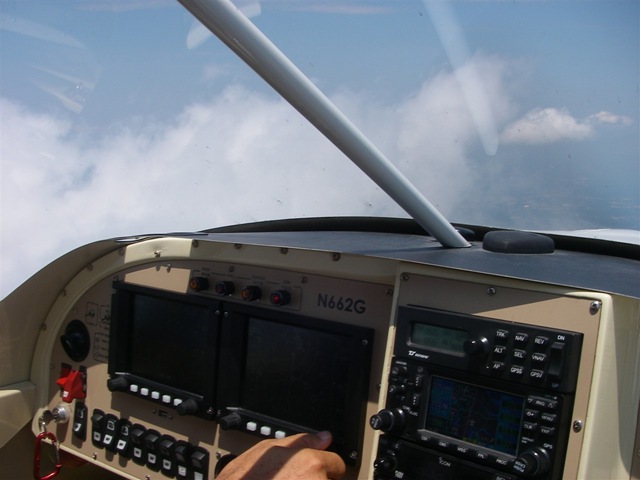 It was a perfectly sunny day out with little puffy clouds, and because the DC area ATC controllers decided to route us all over creation, we got a good ‘scenic’ flight. Over Annapolis, and eventually directly off to the side of downtown Philly and right over the course itself. 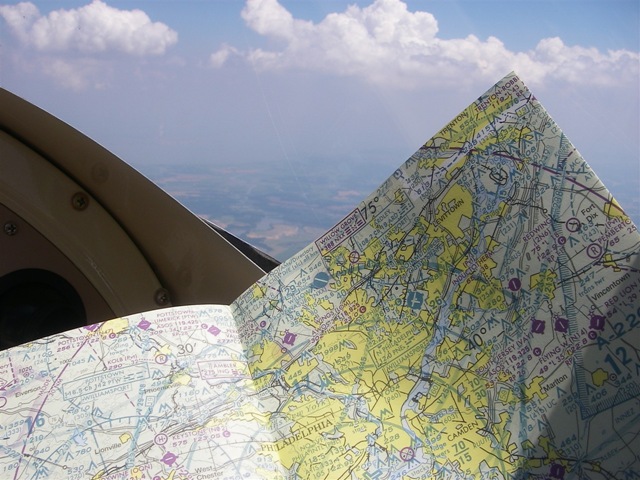 (Aeronautical map of the area around Philly)

I was the Chief Navigant Officer for the flight (hey, stop laughing…I actually have more experience than you might think flying aircraft)…but my job today and yesterday basically consisted of looking at the pretty map and spotting things we were flying over. Air Traffic Control, and multiple GPS systems (and the autopilot) simply took us from place to place.

A short while later we landed about 15 minutes from Downtown Philly. Off to race check-in, grabbed my hot pink swim cap (Yeah baby!), and met up with both Jeanne and Nancy.

Functionally speaking, the pre-race drill was a bit dorked this morning. The hotel didn’t serve anything until 6:30AM – way to late for my good. And I didn’t ponder this situation until about 9PM at night. So I had to have the hotel staff at night make me eggs, toast and bacon – which I assembled into a breakfast sandwich in the morning. It wasn’t exactly ideal – but it worked. 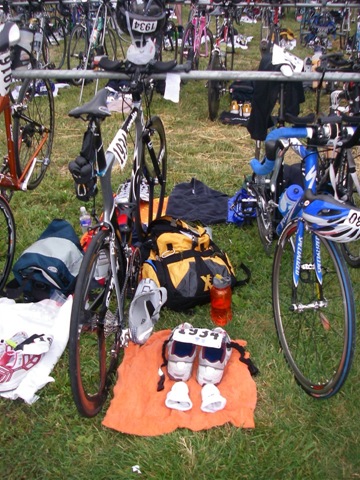 Got my transition area all setup. Having the brightly colored tape for the end of the transition rack was a god-send. Made it SOOOO easy to find my rack among the never ending rows. 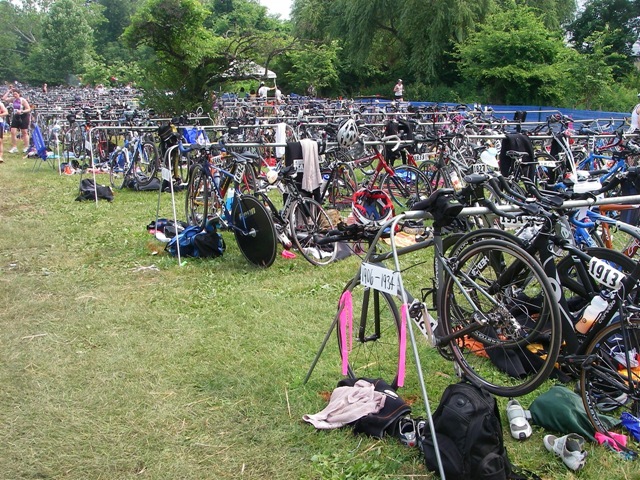 (I was matching: hot-pink swim cap and hot-pink tape on my…rack.) 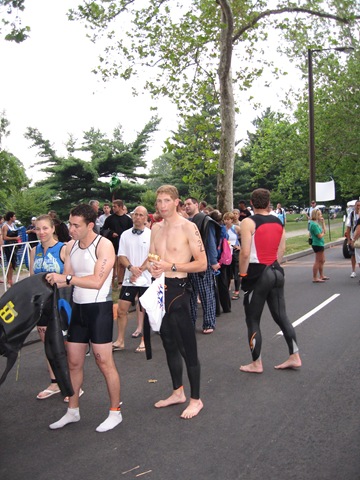 (Waiting in line for the busses, still over an hour till race start. And eating my not-so-tasty sandwich…and giving the ‘why are you taking my photo’ look) 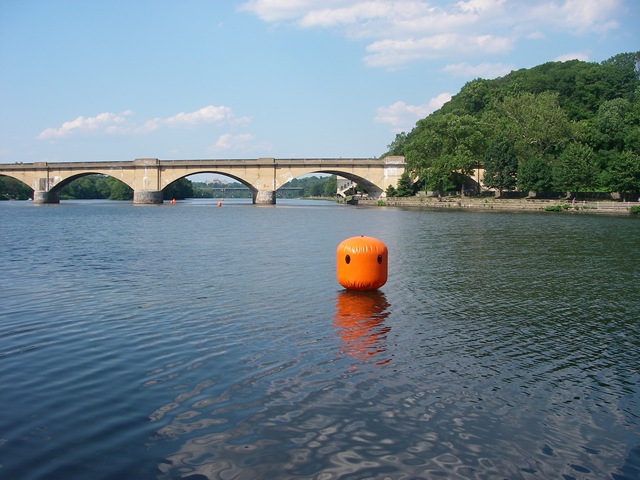 (Looking upstream from the swim exit, you swim down, under the second arch from the right, and eventually to the ‘beach’)

The swim started upstream, and then you worked your way downstream to T1 (and T2/Finish). They bussed you up to start area. I didn’t realize how big the swim wave was – at least 200 people (both my AG, and three others). I got on the front edge and it worked out pretty well. I was very concerned about being the 9th wave and having to swim over and under people the entire time. But it wasn’t too bad. I think I only swam through/over/under half a dozen or so folks from other waves. It’s the ones floating still you don’t see (they don’t make bubbles, unlike people moving forward).

At any rate, I had a decent swim and exited the water in 24 minutes (the times keep shifting, I thought it was 1-2 minutes faster by my watch). 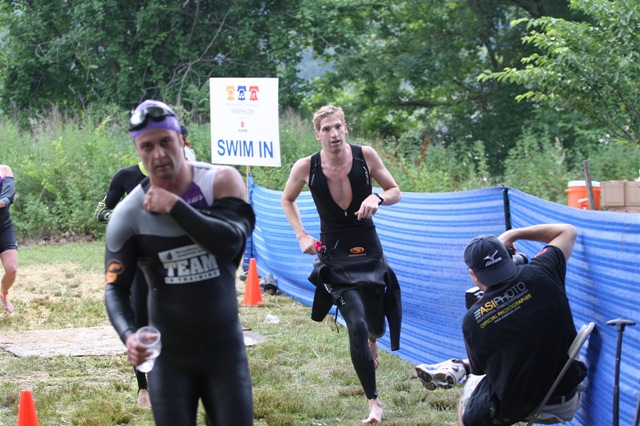 (I’m the guy cornering to the right…ya know, with the hot pink swim cap in hand)

My T1 was very fast, still some work I could do in the wetsuit removal department, lost a few seconds there – but otherwise all my recently practiced transition ‘workouts’ really sliced off valuable time. 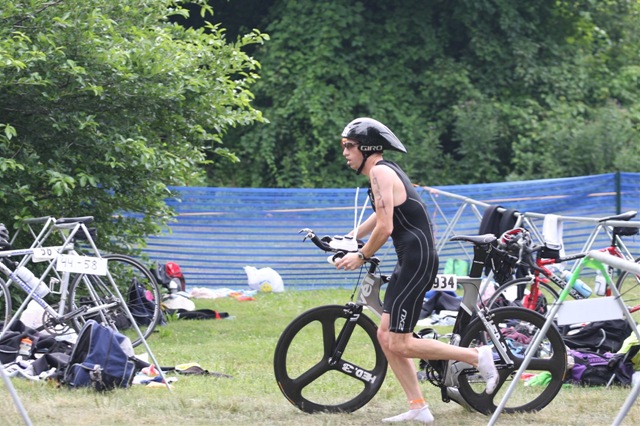 My biggest concern of the week/night/day was the flying mount that I practiced so much. I knew full well that if I did it wrong, I’d make a spectacle. However, things worked out perfectly and I was off and cooking with no issues. Put my shoes on about half a mile down the road once out of the fray. Here’s the little play-by-play of the mount.

The bike course rocked! My second concern was having 2,500 athletes on a two loop course (meaning, only 12 miles for 2,500 cyclists). But, they closed down what was in effect a four lane parkway, so there was plenty of space. And cyclists were great about staying to the right if slower moving, and left if faster.

This was really my first ever ride on the new bike and race wheels on flat ground…and holy $h!t does it fly! The speeds I was able to maintain on the flats were out of this world. *Nobody* passed me on the ascents or flats…*nobody*. Now…descents were a different story, I still suck at them cause I’m a wimp. But I would generally catch anybody who passed me on downhill’s a short bit later on the flats. 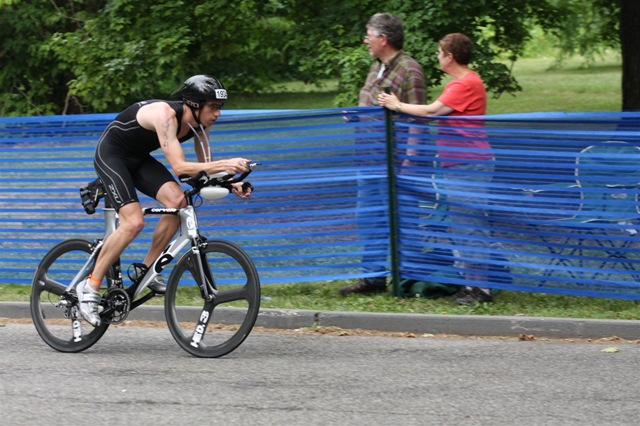 Coming into the flats section in front of transition area, average speed in this section…ummm…really really fast…cough…over 32MPH. I may have been having a bit too much fun here. 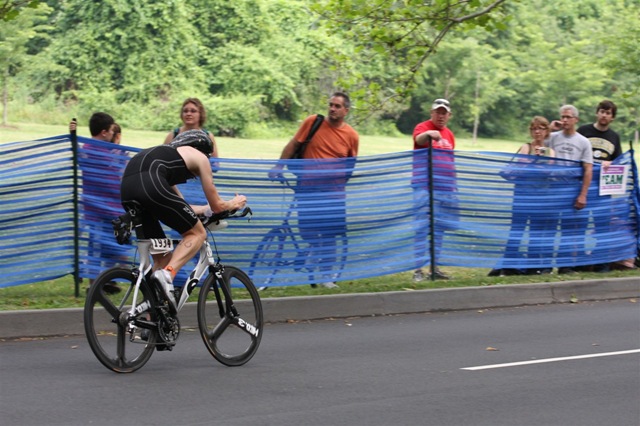 After that, it was time to head on to the run. Except… I still had to dismount. I completely spaced out about this little activity until about 100 yards away from the dismount line. Where I executed the fastest on-bike shoe-removal that I’ve ever done before. Check it out:

(Yes, I find the whole transition thing fascinating… I guess it’s so technical in nature, and I’m a technical kinda guy…so yeah.)

The run…well…it didn’t go as well as I’d planned. I’d been running significantly faster during training recently, but something just didn’t click this morning. I was expecting about a 37-38 minute run, and it just didn’t happen. I think it was a combination of humidity and something amiss on the nutrition side. My coach also pointed out that if this had been an ‘A’ race, we would have tapered and not had an 82 mile bike on Sunday or a 20 mile run on Tuesday, but was not an A race. That said, I ran as well as I could given the day. I ended up at 41 minutes (6:45 pace). I just felt as though the engine

(Here’s the theme of the run: cooling down) 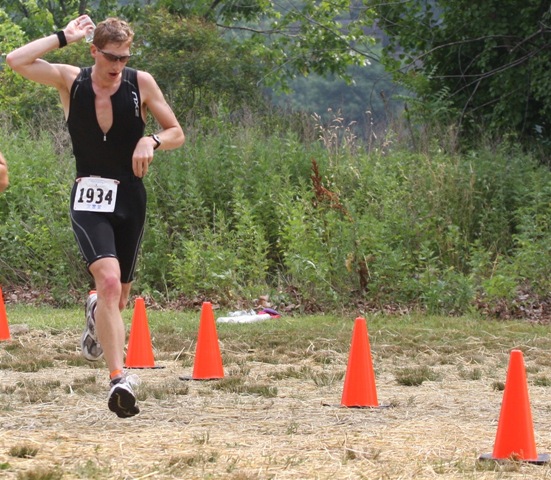 (Cruising by…4 miles to go) 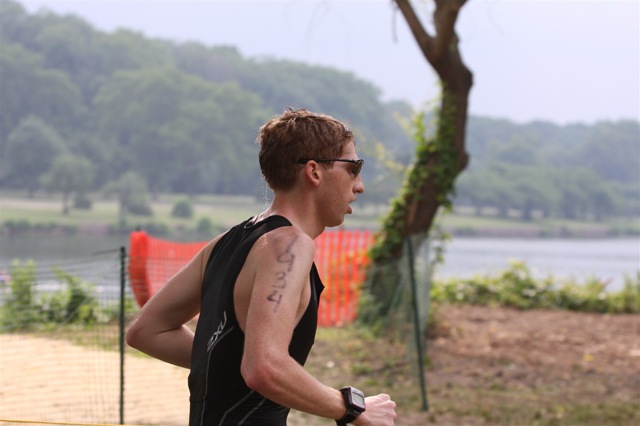 I did manage to take out some folks in my AG over the last half mile or so. It took a fair bit of effort to both overtake three people and keep them at bay…but it was worth it. Finally getting down into the sub-6 min/mile territory where I should have been for a much longer chunk than just half a mile. 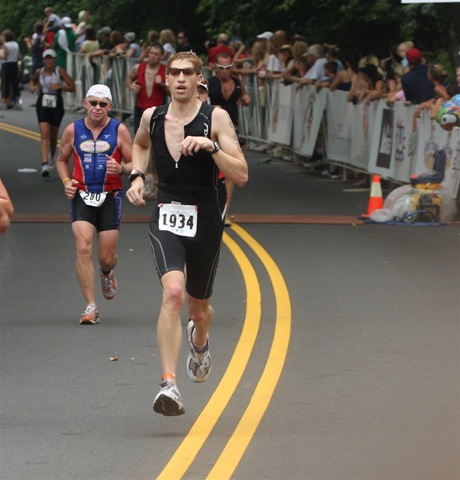 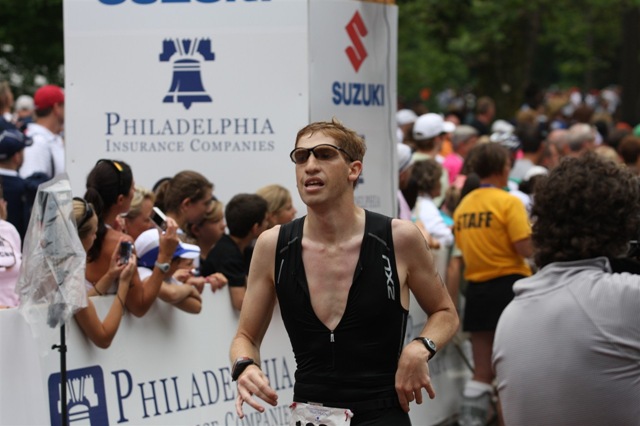 (A second after being crossing the line…check please)

Afterwards, I met up with Washington DC Mayor Adrian Fenty. He’s a very active triathlete…who also does fairly darn well. He finished just 10 minutes behind me – rockin! After chatting about the race and our times a bit he actually gave me his private e-mail address and suggested we hook up for some swims. Cool! 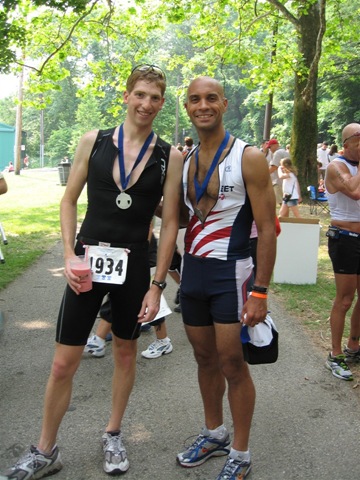 And then, I went back to transition sat down next to my bike and just pondered the steady stream of hot athletic girls wandering by while working my way through a stack of free cookies. 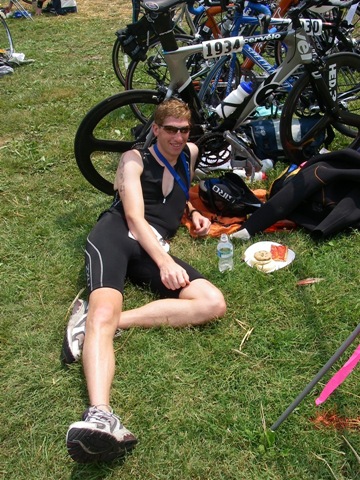 Also saw a ton of folks from DC-Tri club, including Kevin (on the bike, run and then afterwards).

Then, it was back to the airport and up to 8,000 feet for the flight down to DC. So…there ya go – my race report. And yes, I failed on the whole race report ‘keep it short’ thing. My bad. At least it was very picturesque.