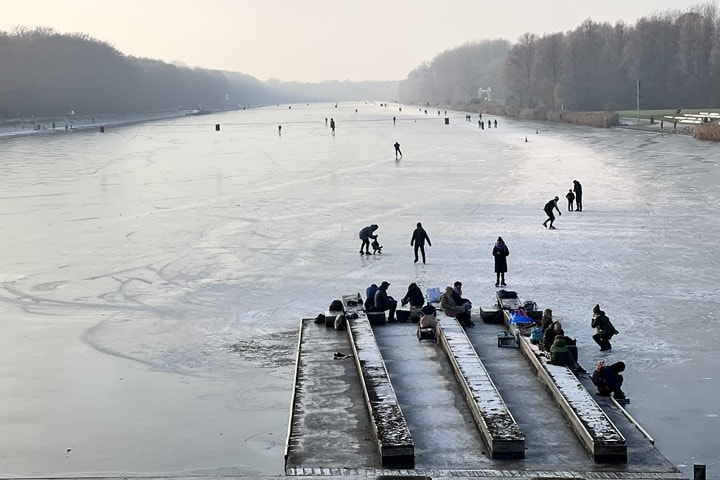 Over the past week or two, the temperatures have gotten a bit chillier here in the Netherlands. While many people assume that the Dutch ice skate to work via canal on the regular, the reality is that’s pretty rare. Not because people don’t skate, but because the water simply doesn’t freeze as often as it did in the past. Next week we’ll have lived in the Netherlands for 5 years, and during that time the ice only froze in the Amsterdam area twice. The last time was in February 2021, when the country had a pretty solid deep freeze for a number of weeks, making skating viable just about everywhere.

In any case, this past weekend things finally got cold enough and the ice thick enough that it was time to skate. What is ‘thick enough’ you ask? Well, I’d argue that the Dutch have a relatively thin definition of that. At least in comparison to most places. However, what’s also left unsaid is that most Dutch canals are actually pretty shallow. This comes from someone who has spent considerable time in them, extracting failed drone tests and action cameras. Short of major shipping waterways, most of the others are maxing out at 2-3 meters in depth (there are 1.2 million Canals in the Netherlands). And many neighborhood canals might only be a meter in depth. 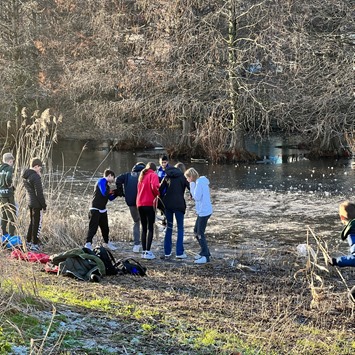 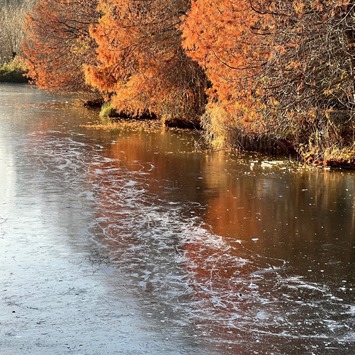 Also of note is that schools even teach ice safety. My 6-year-old daughter’s Amsterdam public school class had ice safety discussions last week as the ice started forming. They talked about what exact ice thickness levels are considered safe, what to do if you fall in, what friends should do if someone in their group falls in, what to do if you fall in but slide under the ice, etc… I was pretty darn impressed. Obviously, at 6 years the hope is that kids aren’t out there solo without parents. But that by constantly instilling this from a young age, it’s ingrained in culture (and it is). Just like it’s effectively required that all kids get their swim diploma (a multi-tier system), with many schools even doing it.

In my case, people were skating on our neighborhood canals, which is fun in its own right. However, I headed over to the Amsterdam rowing basin, where the Olympic rowing team trains. It’s also basically next door to the DCR Cave, making it a quick pedal. This is one of the best spots to skate around here, because it’s easy to get to, plenty of bike parking, and super long uninterrupted ice. And even a restaurant at the end to grab food/drinks. In my case I parked the bike right next to the ice – as one does in the Netherlands. 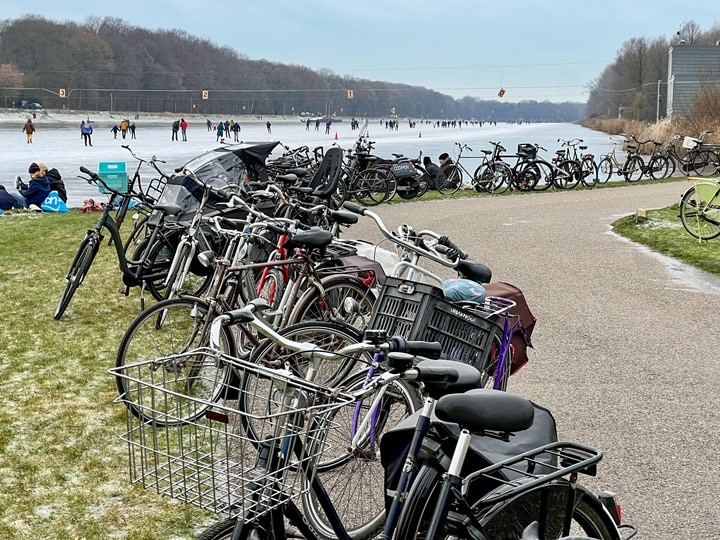 After that, I found a spot to get my skates on. I love how everyone here just leaves their bag of shoes/etc along the side. No real concern of theft. And about half the bags are just either Albert Heijn or Jumbo grocery store bags. I doubled down on that concept. I had my skates in an Albert Heijn grocery bag inside a soft-cloth grocery bag. 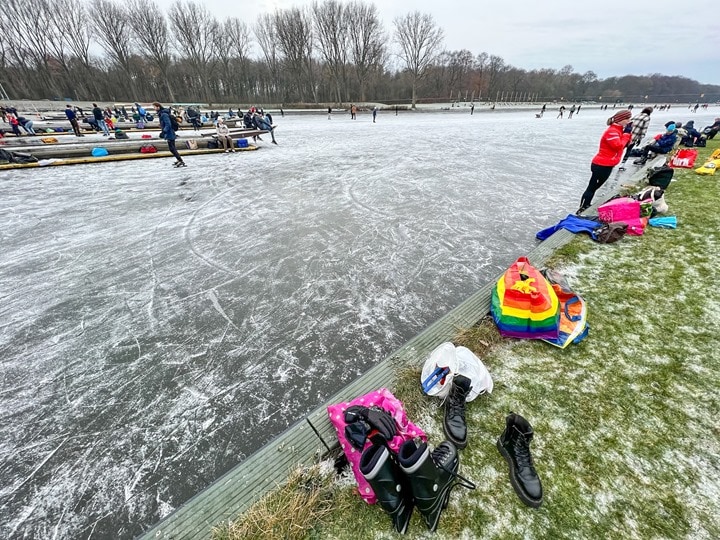 At this point, I readied my watch to record my skating. My plan was a semi-legit workout. Not a balls-to-the-wall workout, but just a nice steady workout skating for perhaps an hour. I also had a few sports tech things to do while out on the ice, as well.

The only problem? Garmin doesn’t actually have any ice skating sport profiles. They have plenty of skiing profiles (downhill, cross country, etc…). But skiing is no more skating, than rowing is swimming. 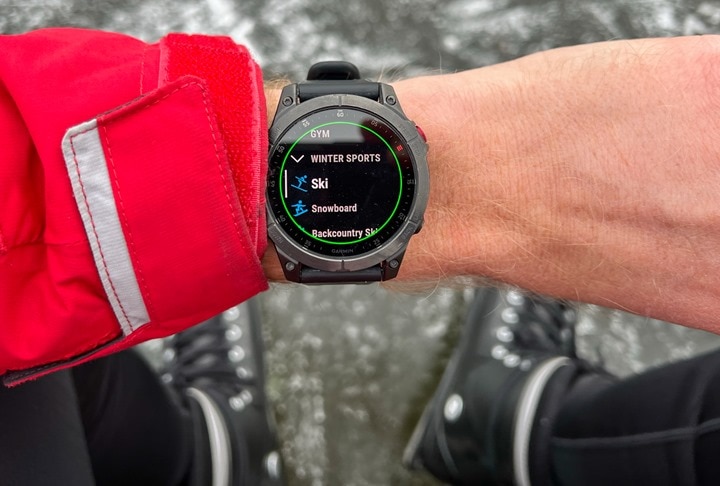 Speaking of rowing, they have plenty of profiles for that too, as well as plenty of other watery activities. And in fact, since I’m running last week’s public beta on my Epix, they’ve also got a new sport profile: Tubing: 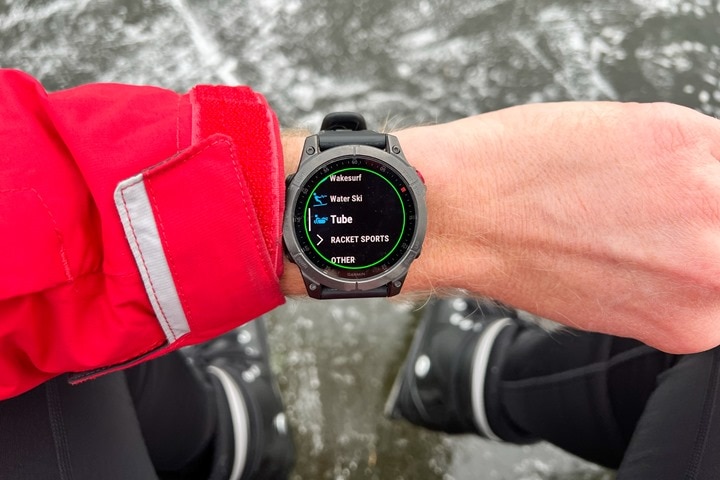 This profile isn’t downhill snow tubing (we don’t have any hills here anyway), but rather, the kind of tubing where you connect a rope to a boat and blast around a lake. Except, the water is now frozen. And again, skating is not tubing.

I’ll point out that both Polar and Suunto have both ice skating and inline skating mode (Garmin has neither). Inversely, neither COROS nor Apple have skating. Of course, both Suunto and Polar are Finnish companies, where ice skating is as much a national pastime as sauna usage. Either company missing that sport profile would be laughed at by their peeps. That said, Garmin acquired Firstbeat back a few years ago, and they too are Finnish. I’d have thought by now Team Finland would have succeeded in convincing Team Olathe on this. Instead, we got Disc Golf and Water Tubing.

Now, before we get off my Tuesday Tangent, I’ll point out that there are basically three types of sport profiles on watches, increasing in difficulty/effort below:

In general, Suunto and Polar tend to mostly fall in camp A/B above with their larger set of sport profiles. Whereas Garmin more recently tends to fall into group C above, with most sport profiles offering very specific data for that profile (like the mountain bike metrics, or connected eBike metrics, or cross-country skiing power, or jump times in wind surfing, wave lengths in surfing, etc..). Not every sport, but a solid chunk more than their competitors.

Meaning, when Garmin does create a sport profile, it tends to be reasonably well executed in terms of data depth. Even tubing, the target of much probably undeserved teasing, actually does this too. It appears to automatically categorize your ‘runs’, including showing your max speed/time/distance on each run, as well as a seemingly unique data page layout to display all this. It even shows a handy list of your runs. Albeit, all of this neatness is delivered at a time of the year when the water…is…umm…frozen. 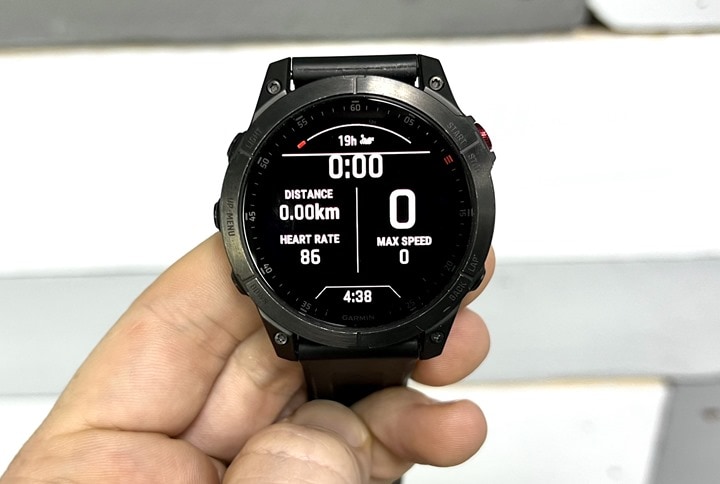 Years ago, I tended to be in the camp that adding sport profiles purely for categorization was silly. However, I’ve slowly changed my thinking on it, and favor both categorization and calorie ones, as well as ones with actual data-driven metrics too.

In any case, I ultimately decided on Skate Ski for my skating. This is still very much a skiing profile, but hey, at least it had the word Skate in it. 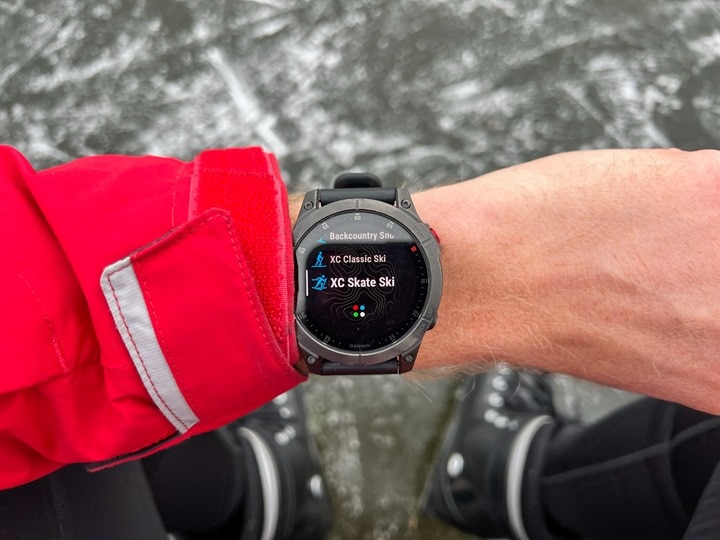 With that, out I went. The length of the rowing basin is 2,200m long, and 118m wide. Supposedly it’s officially 3 meters deep, but in chatting with Olympian rower turned GoPro dropper Niki van Sprang, we both agree it’s closer to 2.0-2.2m deep in the sections we’ve been – given we can occasionally touch the ground. Either way, it’s a great place to get some nice long uninterrupted stretches in. 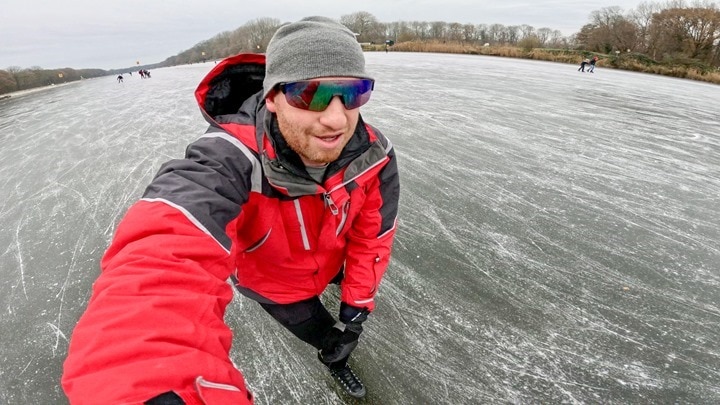 And what’s cool is that every 250m there are markers with the distance to the end written on them, hanging over the ice. This is for rowing of course, but it works equally well for skating (or running, when I’m doing intervals next to the rowing basin). 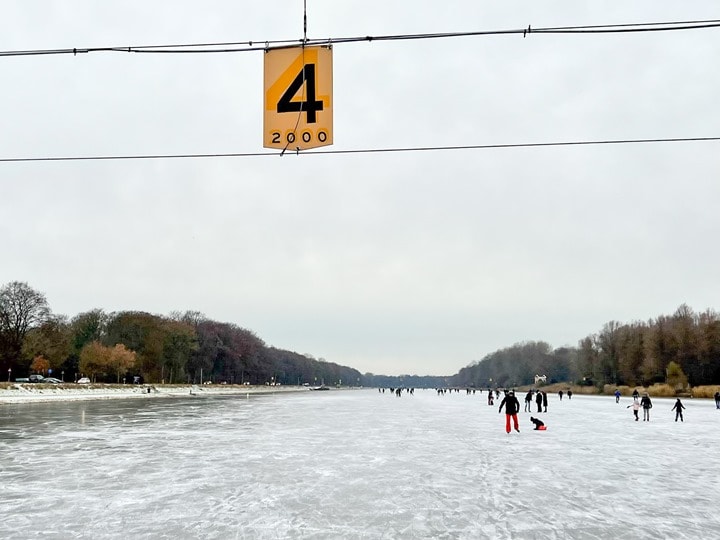 The ice was pretty darn smooth, with only a couple of tiny cracks here and there. It twanged the weird laser-like ice load shifting twangs as people skated atop it. There were some parents dragging kids on sleds, and one or two with strollers/prams. Some chairs. But mostly people were just doing long steady loops on either speed skates or regular skates. 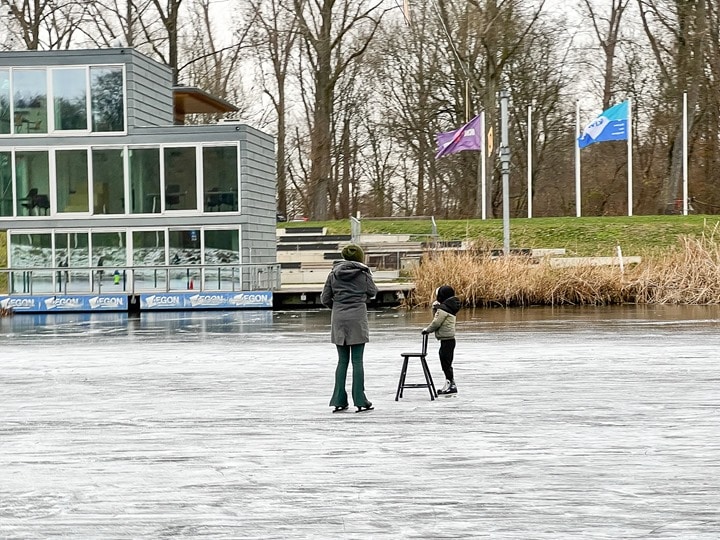 In my case, I only had my last-minute Decathlon “here’s what’s in stock” skates from the big freeze two years ago, which are undoubtedly a tiny bit too big. I’d be game for getting speed skates though, but I’d probably want them properly sized. 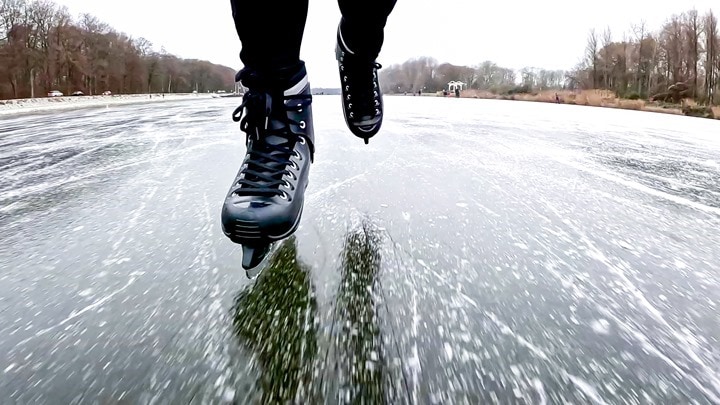 For the most part, my speed floated between 20-25KPH at a relatively easy heart rate/pace. And the temperatures were perfect, about -2-5°C/23-28°F, with almost no wind. It was sunny the day prior, but it didn’t fit into the schedule. 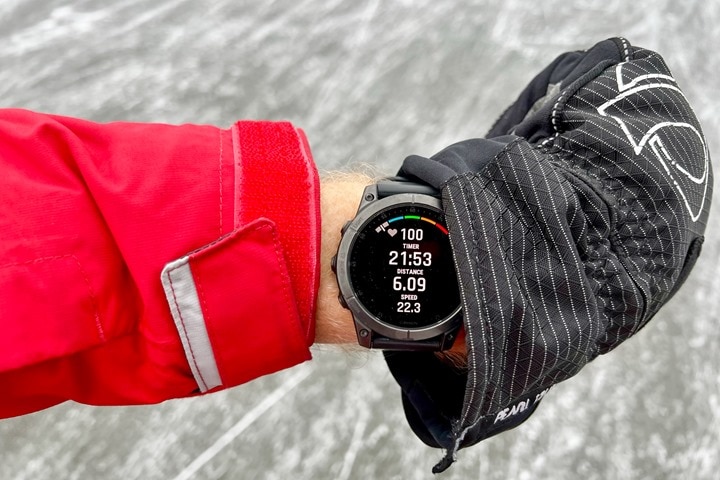 After skating for about an hour, it was time to go back and pick up the kids and bring them out. So I hit save on my watch. In my case I spent about 15 minutes before my last lap fiddling with some sports tech standing still, so obviously my average pace metrics are off. But that’s fine. 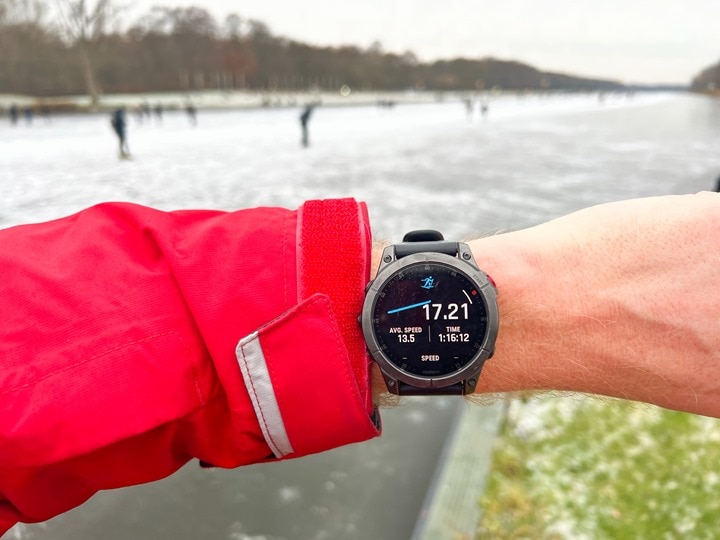 The GPS tracks look super crispy, as expected from this multiband implementation. With the lane markers as noted earlier, I tried to stay in lane 2 on the outbound, and about lane 4 on the return. Obviously, I occasionally had to avoid other people, an impromptu hockey game, or a random hole in the ice. But still, you can see things look consistent:

With the activity synced immediately to Strava, I was able to go into Strava and change it to Skating, as Strava (like Polar/Suunto), also supports skating – both inline and ice skating. Even skateboarding too.

Yet finally, it’s worth noting I can actually change the sport profile on Garmin Connect (web or phone) to Skating (within the Winter Sports category):

That does help with categorization/sorting on Garmin Connect, but it doesn’t push it back to the watch with the correct activity type. Nor does it update Strava/etc (because that sync happens instantly upon upload, and so you can’t update it before it syncs). It’s nice to see it is offered here, but I think people kinda expect these two to be a bit more in sync.

With that, by the next morning ice was in disarray due to a massive warm front that moved in, alongside dumping warm rain. Hopefully though with the early-season low temperatures, it’ll have chilled the water considerably so that next time we get a cold front, it won’t take quite so much effort to get icy canals again. I’d love to get some more skating in, and if the canals are frozen enough, further from Amsterdam like two years ago.