Not one to be outdone by Apple’s big firmware updates this week, Garmin has launched the beginnings of their next quarterly update release. As you may remember, Garmin switched to the quarterly release scheme for feature updates, but that also includes bug fixes too. As usual, other bug-fix updates can happen outside that schedule as needed – but the major features are being released quarterly now, and ideally all at once across all current-gen watches (or bike computers/etc…).

As part of that, Garmin has their Beta Program for each device model. That beta program starts with so-called ‘Alpha Builds’, and then after what is usually 3-5 weeks, escalates to ‘Beta Builds’. The Alpha builds must be downloaded manually to your watch using a computer, whereas the Beta builds automatically show up on your watch using WiFi/Bluetooth. Both are part of the ‘Beta Program’.

In today’s update, Garmin has added a slate of features that are pretty diverse. Some of them, such as the Jetlag Advisor come from the Garmin MARQ Gen 2 series when it launched back in October (I explain the feature here), while others are expansions of existing features (like adding Stamina data field to bike sports, or adding PacePro strategies to the Race Widget).

If you want to join the beta program, you can do so here, or I’ve written up instructions here. 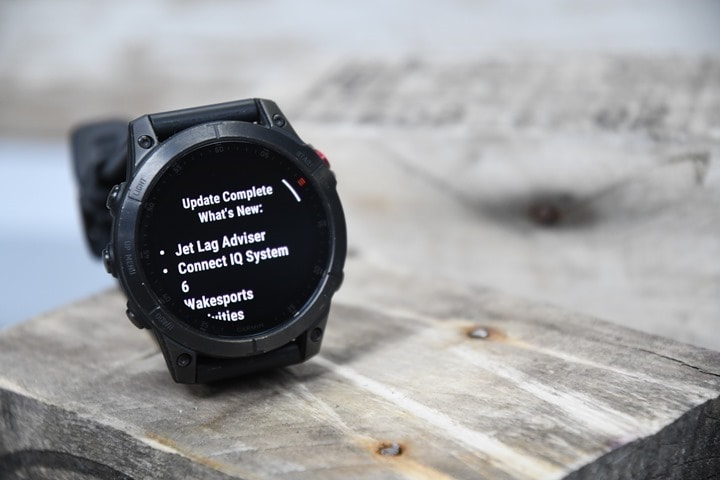 Generally speaking, this tends to be the tip of the iceberg. We usually see further additions, but these are the ones Garmin feels are most ready at this point for public usage. Given ones like the Jetlag Advisor have been on the Garmin MARQ Gen 2 series for a few months now, they’re further baked.

Oh, and for those wondering about the Forerunner 955/Instinct 2/etc…as usual, different watches have different timeframes for when they start their quarterly release beta program. Sometimes the Forerunner team gets there first, sometimes the Outdoor (e.g. Fenix) team gets there first. In this case, some of these features wouldn’t end up on a Forerunner anyway (like the Sailing ones). However, Garmin has previously committed that the Forerunner & Venu lines will get the Jetlag feature, though they haven’t specified an exact timeframe or which precise models (I’d assume FR955/Venu 2 Plus, and maybe FR255).

These are applicable to the Fenix 7 Series, Epix (Gen 2) series, Enduro 2, and MARQ (Gen 2) series watches. The exceptions being both the MARQ Aviator and Tactix, which Garmin kinda-sorta-but-not-really-explains why here.

In any case, here’s the newness as part of Alpha Build 11.15 (which as a reminder, you need to manually download):

Note that I’ve only outlined the specific new features page, not all the ‘improvements/changes’ realm, nor all the bug fixes. All of those are listed in full here. The one exception I pulled into the above list is the last one, since that was basically adding a bunch of features. Make sense?

First up, for those not familiar with the Jetlag advisor, I’d recommend reading my MARQ section on it. For better or worse, I’ve put this feature through the wringer over the last three months. I think I’ve done somewhere around 3-4 transoceanic round-trips since then, with time zone shifts upwards of 12 hours, as well as short basically single-day work trips across the pond and back. Collectively the Garmin Olathe and Firstbeat teams groan every time they see I’m getting on a plane, but it’s definitely getting better.

The first thing to know is you need to create your trip in the Garmin Connect smartphone app. You’ll enter the exact trip details, including arrival/destination cities, as well as dates/times. If you have a multi-leg itinerary, it’ll handle that too. Here’s a fake trip for this afternoon I created:

Once you’ve done so, you’ll start to get those recommendations. These include recommendations on seeking or reducing light, when to sleep, when to exercise, etc… This is both on the watch, and in Garmin Connect Mobile (as shown above). 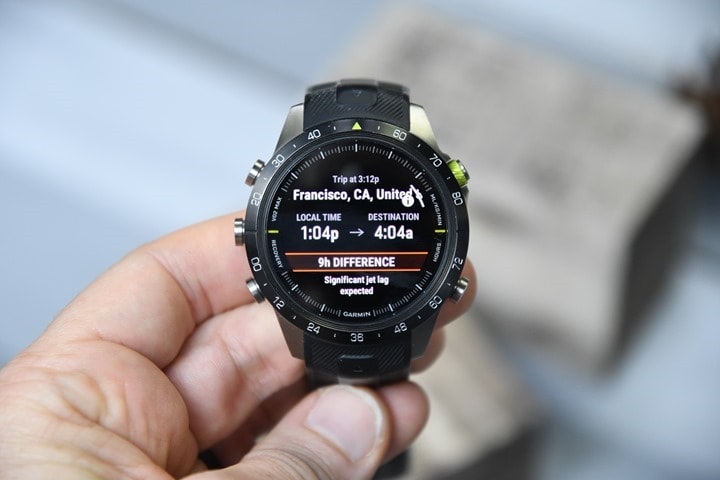 Again, lots more details on it when I tested it back on the MARQ series, here.

Next, Garmin appears to have quietly added/started HRV Status sync via Physio TrueUp in the background. This is notable because I didn’t wear either my Epix or Fenix 7 units to bed last night (or at all in the last few weeks), and yet, I’ve got my full HRV Status synced to them after the update (and after they successfully synced). It’s not clear to me if this explicitly required the firmware update, or was turned on at the same time. This will be super cool once completed. At the moment, it’s clearly still a bit beta though, with some pieces missing. 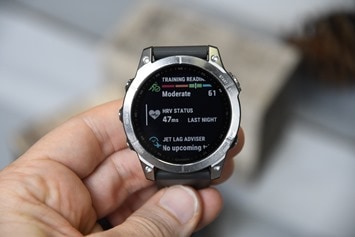 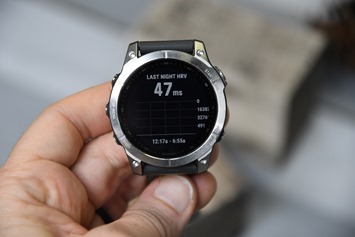 (I also tried a Forerunner 955 and Fenix 7 base that I haven’t worn to sleep for a month or so, with both on the regular production firmware. Neither show my HRV status, thus it does seem to require the new firmware.)

Next, Garmin added the Connect IQ System 6 to these units. This was previously announced this past fall at the Garmin Developer Summit. However, it does not yet appear to show the Connect IQ browsable store that was shown then. However, this is undoubtedly setting the stage for that. Garmin has previously stated they hoped to have the browsable store out by the end of Q4 2022 (end of December). That might be a bit optimistic now. Nonetheless, it lets developers start testing these apps on real-world devices. 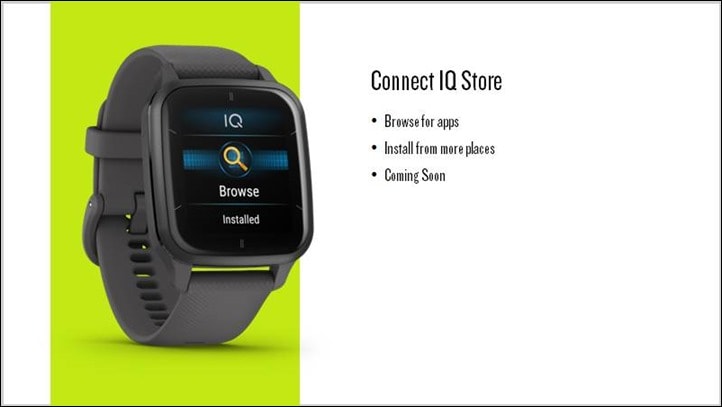 Next, Garmin has added multi code point emoji support. Which, is a developer way of saying they added skin-tone variation support. You can see an example of this side-by-side between the Epix (updated) and the Forerunner 955 (not yet added) with the same thumbs up emoji. This emoji was sent with a darker skin variant, and that shows on the Epix, but not on the Forerunner 955. Also, you see just how much nicer the AMOLED screen is. 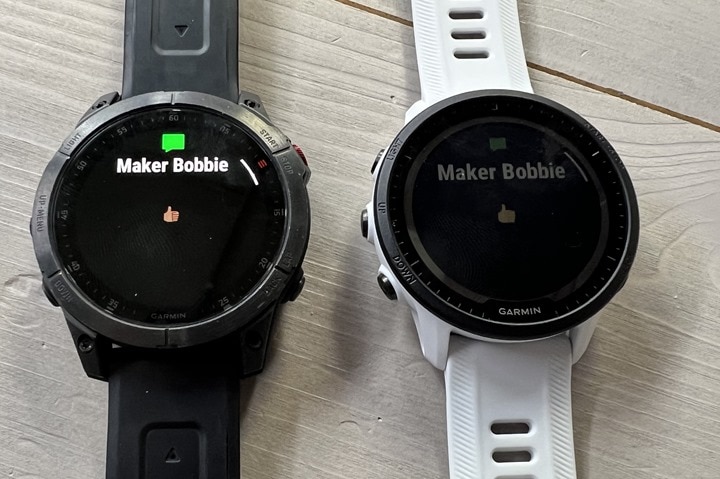 And then as the baseline, here’s the previous/standard yellow edition sent, shown on both: 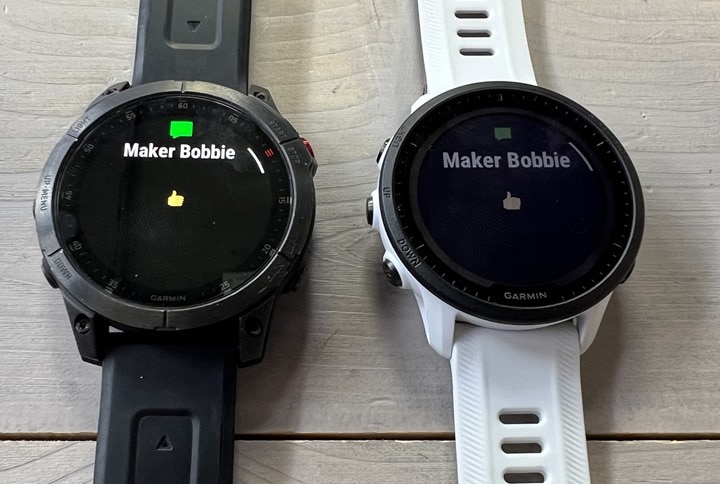 I think for the most part, the remaining items are relatively self-explanatory.

In any case, more to come I’m sure! With that, thanks for reading!